It’s no secret that fashion styles from the 80s are back, but what good is that for those who don’t feel like they fit into the preppy, polished style framework that was popular at the time?

Luckily, beyond the polo shirts, white sneakers, and power suits, there was another fashion trend sweeping youth culture that was bolder and spoke to a niche with a different set of values than what was presented in the mainstream.

While we may think of spikes and chains as a relatively new invention, these types of trends have actually been around for decades.

In fact, many of the fashion choices that we would consider “punk” today have their origins in the 80s, particularly within the United Kingdom.

How do you dress in an 80s punk style?

The aforementioned chains and spikes are definitely an important component of what we consider “punk style.” Still, it is vital to point out that behind the punk subculture, there was an influential social movement happening.

In a world of increasing conformity brought on by mass consumerism, many punks felt it necessary to make a statement through the way they dress, sending a message to the outside world that they were doing their own thing.

Aside from this, they also saw the way they dressed as a way to rebel against consumer culture, especially if they could create punk rock looks by using items found around the house or at a thrift store.

We may be far away from the 1980s in some ways but in a lot of ways, a lot of the messages that punks were setting out to prove still ring true. Whether you want to support a message of individuality, or just like the way that the style looks, here are some punk clothing staples to incorporate into your wardrobe.

Docs have been around since the 1940s, but it was really in the 1970s and 80s that they found their footing (pun intended) in niche youth culture in the UK.

The high-top boots were built for function, with a distinctive sole cushioning that offered more support than the average fashion footwear, but their sleek shiny exterior meant that they naturally paired well with the 80s punk aesthetic. 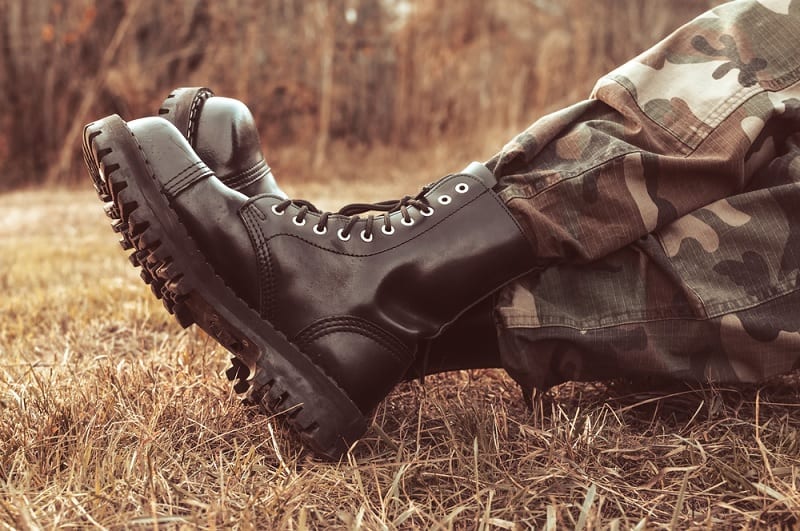 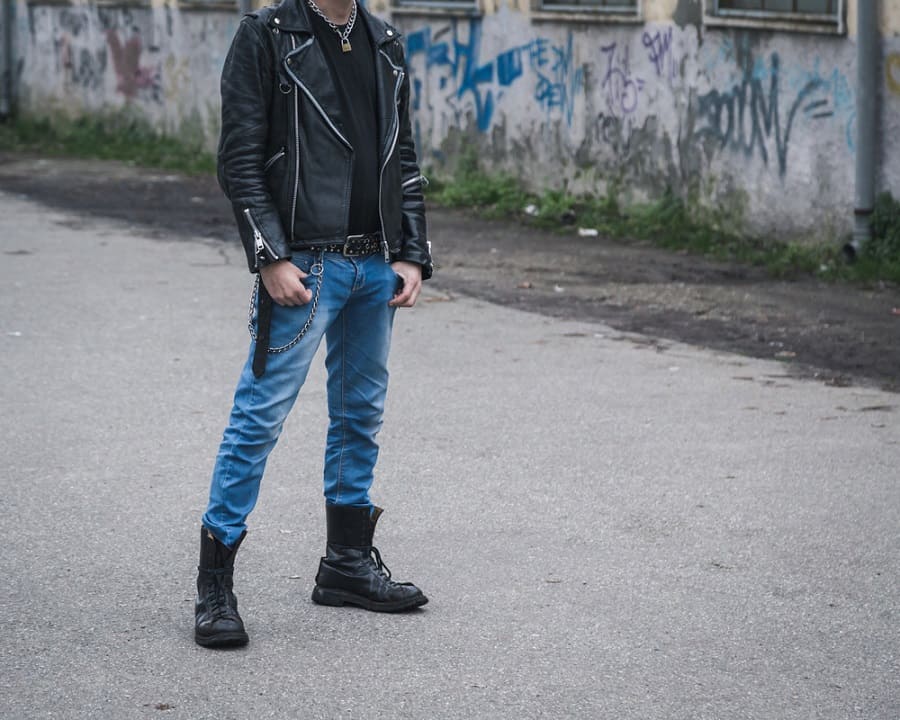 A regular feature of punk rock fashion styles, chains are an easy way to experiment with edgy elements without taking a full dive in. As we touched on briefly in the introduction, one of the fundamentals of punk style was its DIY energy. The idea was to be as inventive as possible with as little as possible.

If you could put a full outfit together without spending much money (or ideally, without spending any money at all), chances are you’re a punk rocker effectively following the punk movement. It’s likely that the first people to incorporate chains into their outfits had just found them in the garage or tool shed, which is about as punk as it gets. 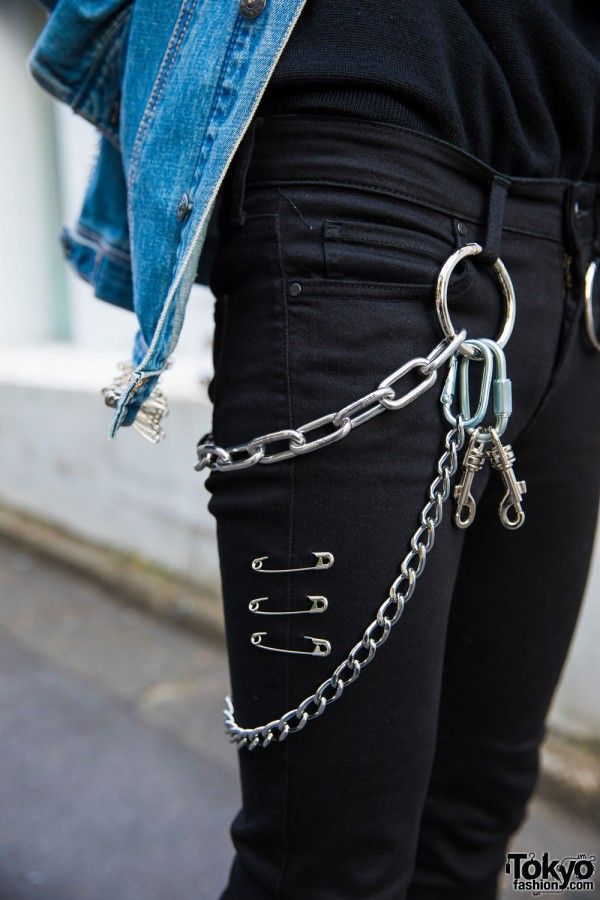 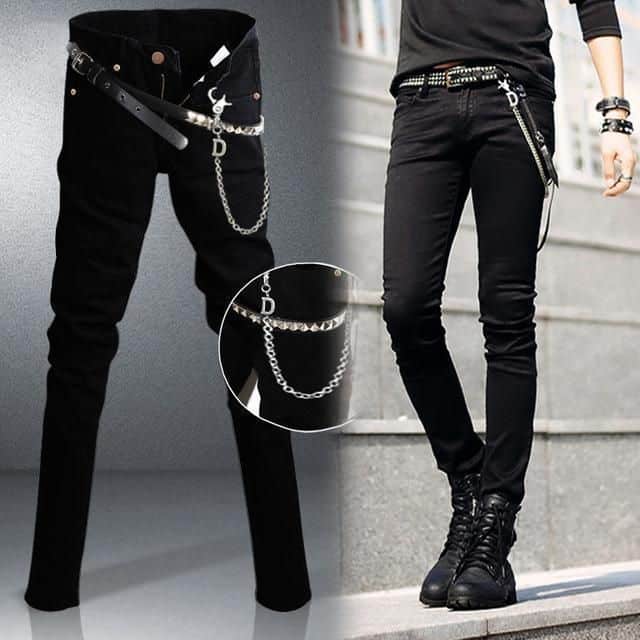 A flannel shirt is one of the most versatile fashion pieces, as it can hold its own as a staple across a scope of styles from country to hipster. In the world of punk fashion, a plaid shirt is best worn unbuttoned and with the sleeves ripped off.

If you can get your hands on plaid pants, those can really pull an outfit together as well. One great example of DIY style is having this pair of pants with two different colors sewn together. 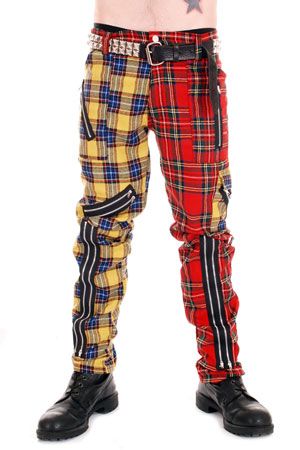 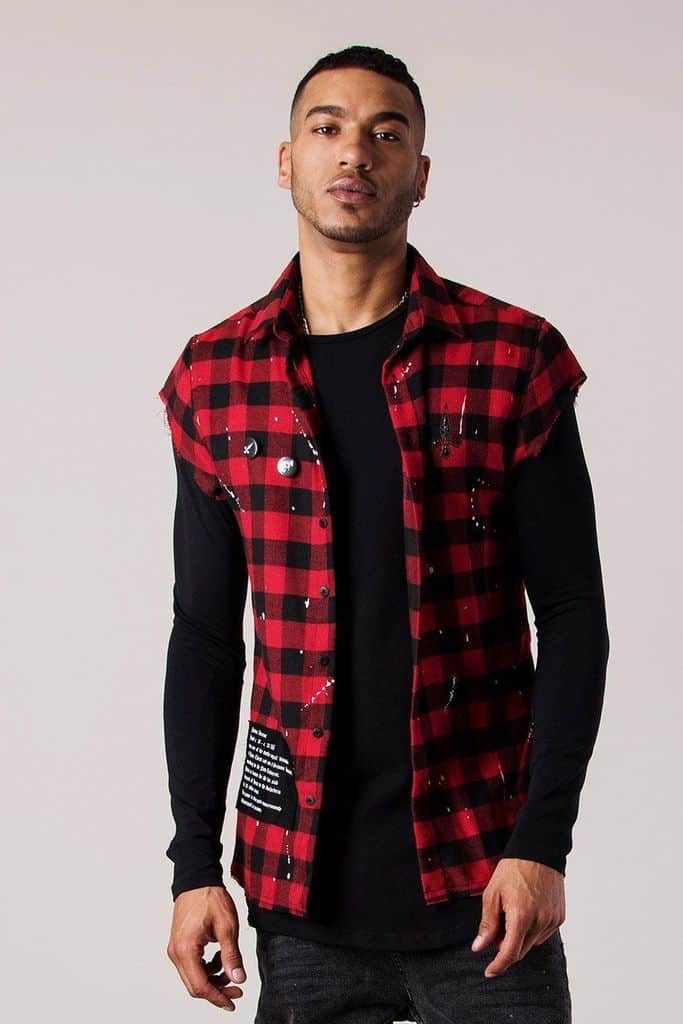 Ripped skinny jeans are another fashion choice that is shared across a variety of cultures, but when done the punk culture way, they are usually black with ragged rips throughout the pants leg. Of course, there is no sense in buying jeans that are manufactured this way.

It is much more appropriate to give an old pair of pants a rip or seven, or to go to the local thrift store and find a pair that is already tattered. The more rips, the better. 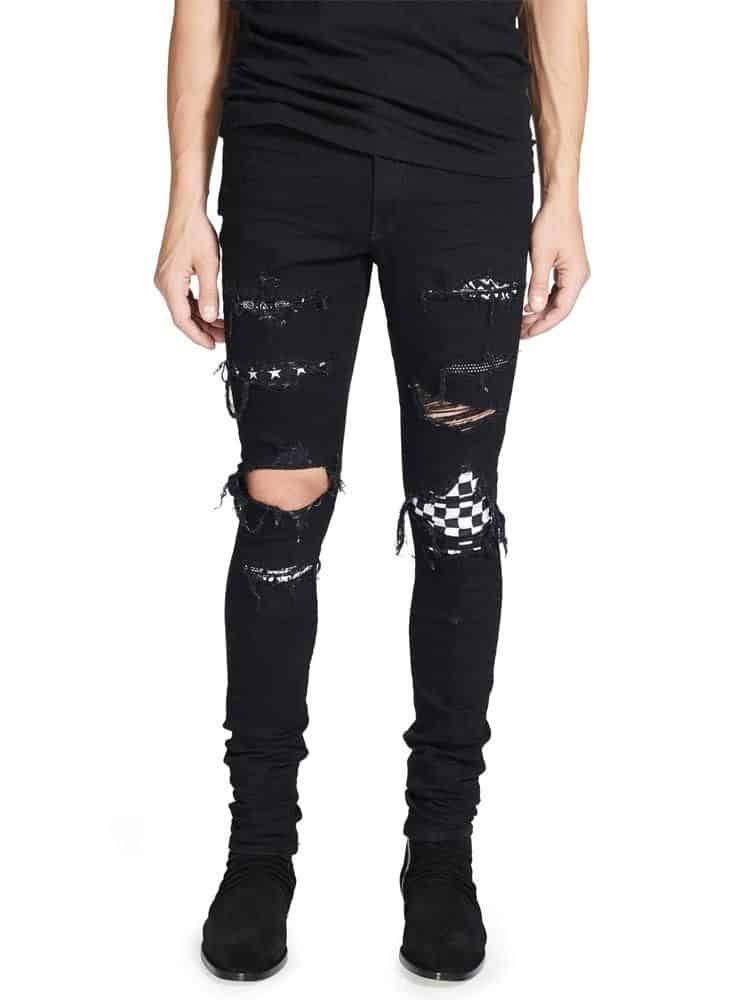 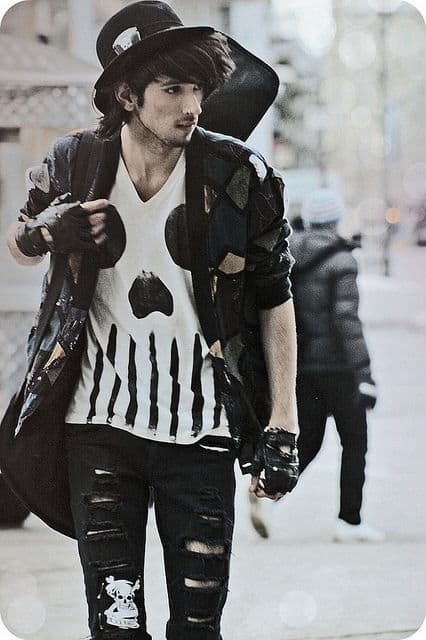 A lot of elements of punk fashion may appear to be very theatrical and exaggerated, but the style can also be as simple as you want it to be. There is something to be said about a simple pair of ripped jeans, some black combat boots, and a vintage band tee.

The spirit of punk is all about expressing yourself, and wearing your favorite bands on a shirt is one of the best ways to put your individual tastes on display. 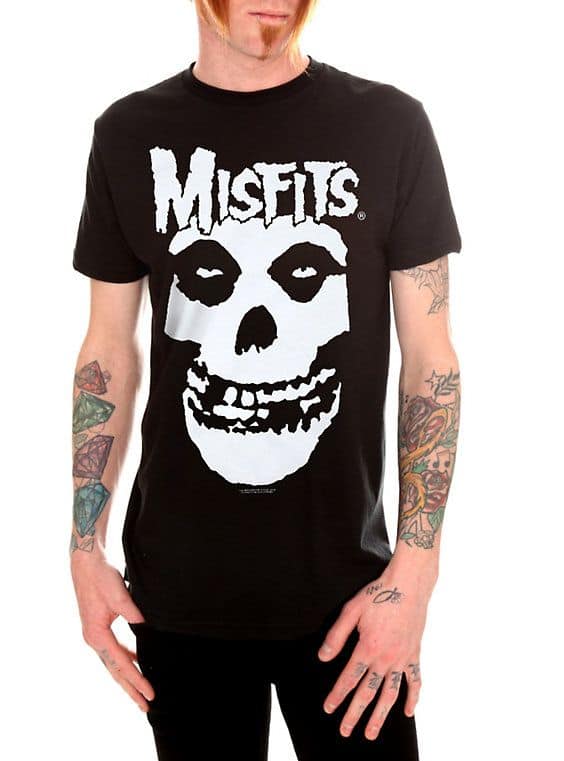 Not only does this give your black leather jacket that special touch of individuality, but it also gives you an opportunity to express something that you personally feel strongly about. Another option is to find a jacket that is adorned with spikes. 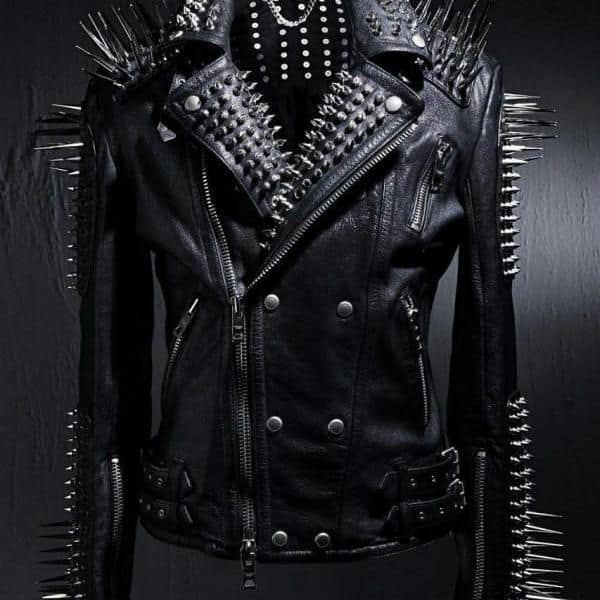 Remember when we said that punk fashion prides itself on incorporating materials that are found around the house? Safety pins are some of the most basic household items that many of us have tucked into our desk drawers. For a look that instantly screams “rebellious,” attach a safety pin to your t-shirt or pants. 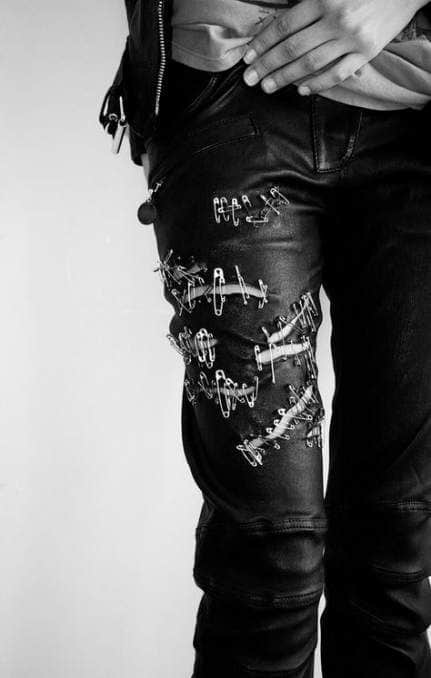 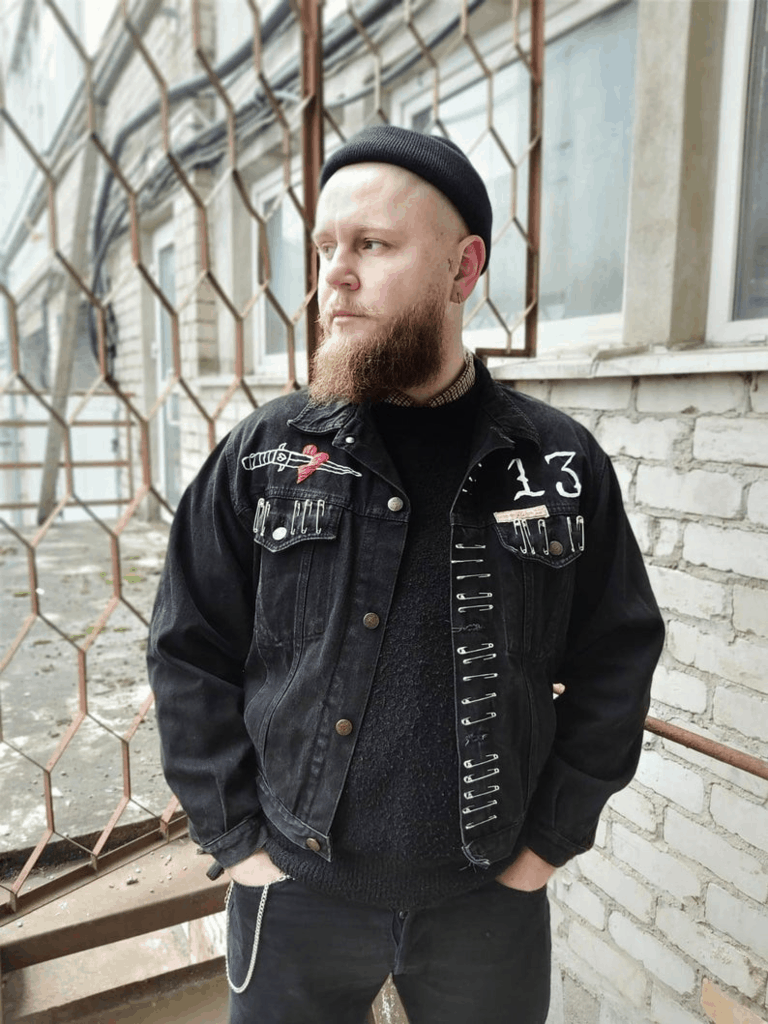 We already mentioned the ways in which a patch can personalize a jacket or plaid shirt, but we believe they’re a pivotal enough element of punk style that they deserve a section all of their own.

Punk patches can really be whatever you want them to be. After all, any rule that exists in punk fashion is a rule that is meant to be broken. Is there a piece of an old t shirt or tote bag that speaks to you?

You can create your own patches by cutting them out and sewing them on another piece of clothing. The possibilities here are endless. 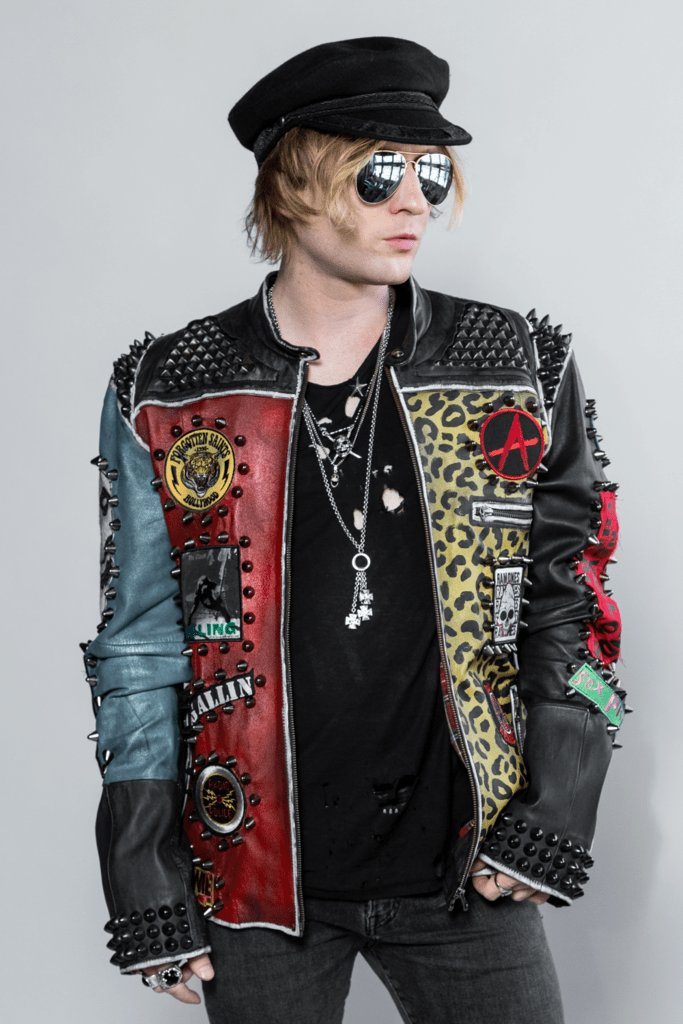 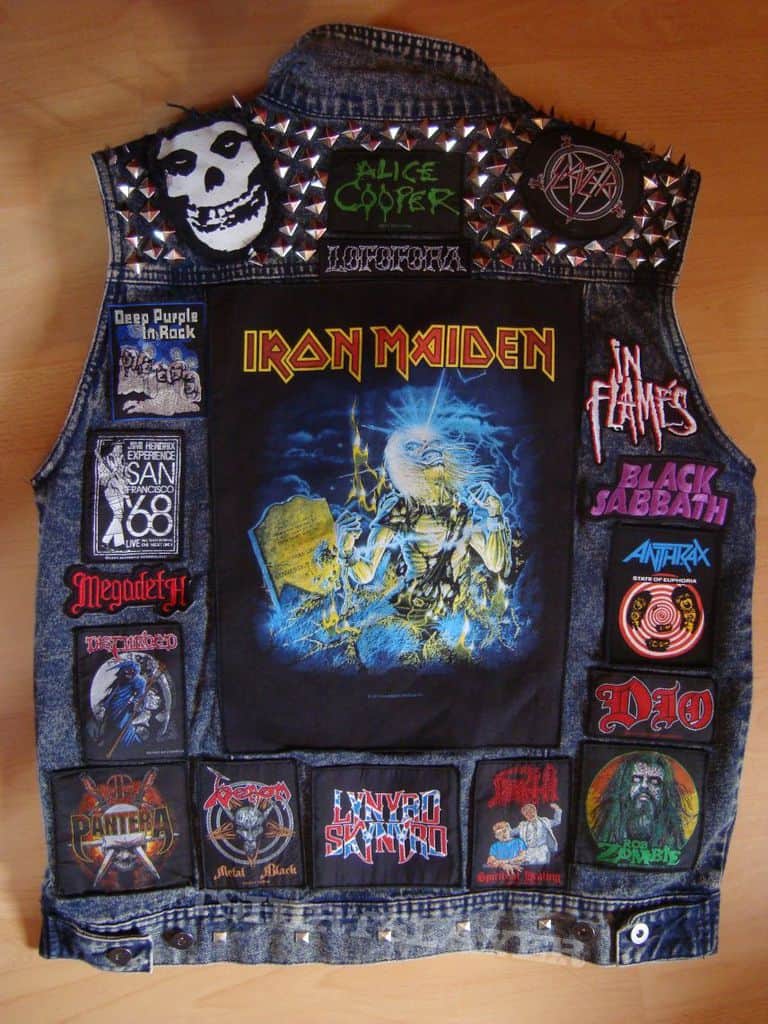 Kilts, while best known for being the official attire of bagpipe players, have also found a home in the punk scene. One of the main philosophies behind this fringe fashion movement is ways to push the envelope, and what is more boundary-pushing than skirts for men? A kilt is a great way to make a statement and show that you’re not afraid to dress unconventionally. 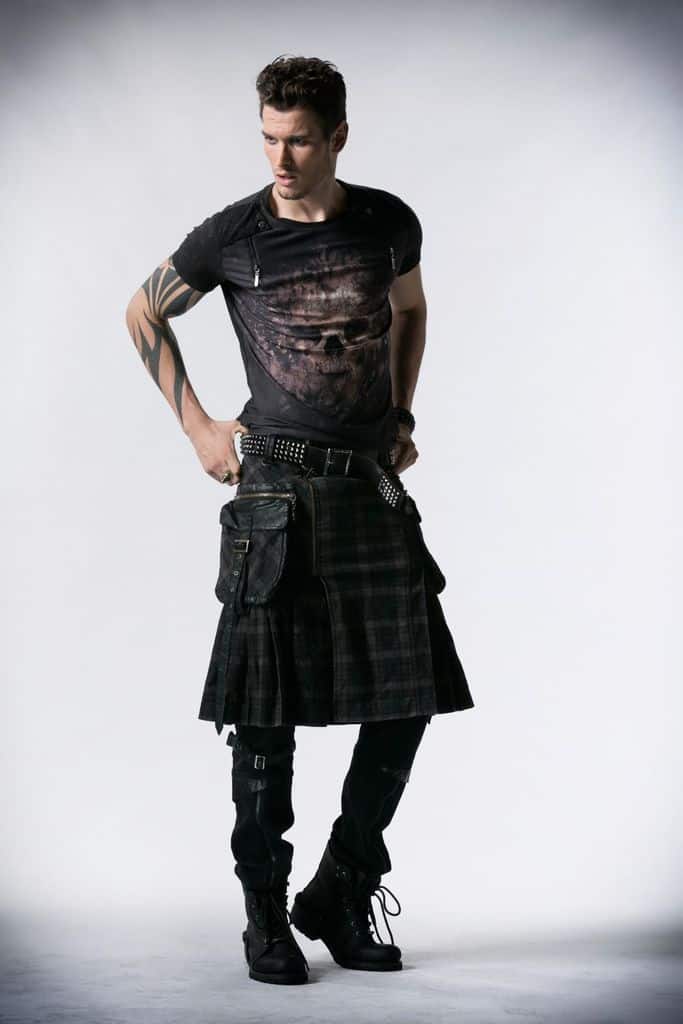 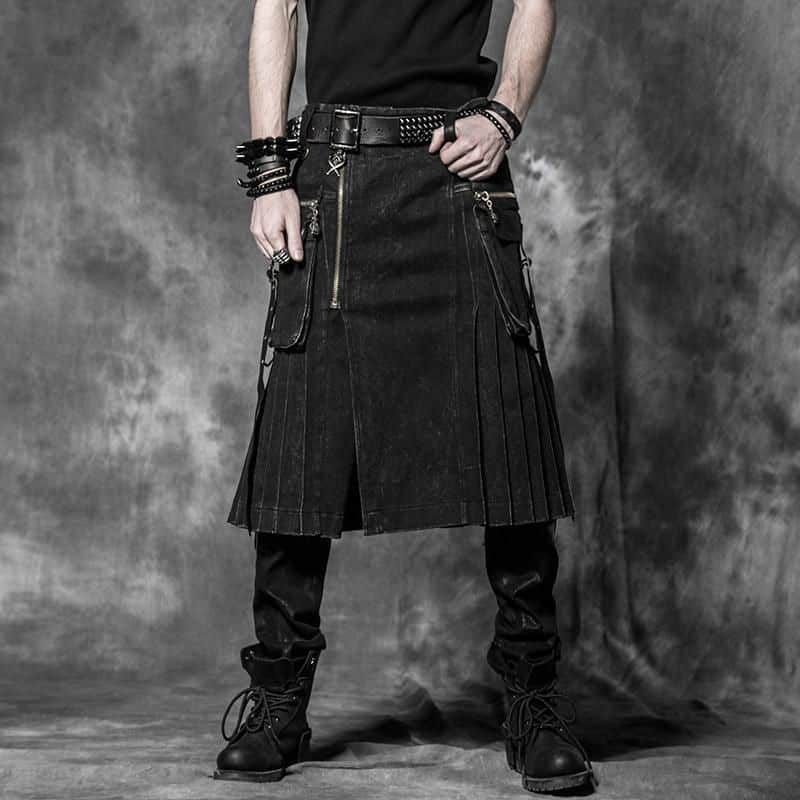 After showcasing the ways in which a leather jacket can add to a punk jacket, we would be remiss to not mention their lower body counterpart, the leather pant. When it comes to leather pants, the tighter the better.

Much like plaid or black jeans, leather pants can also be adorned with safety pins, buckles, or chains to your liking. 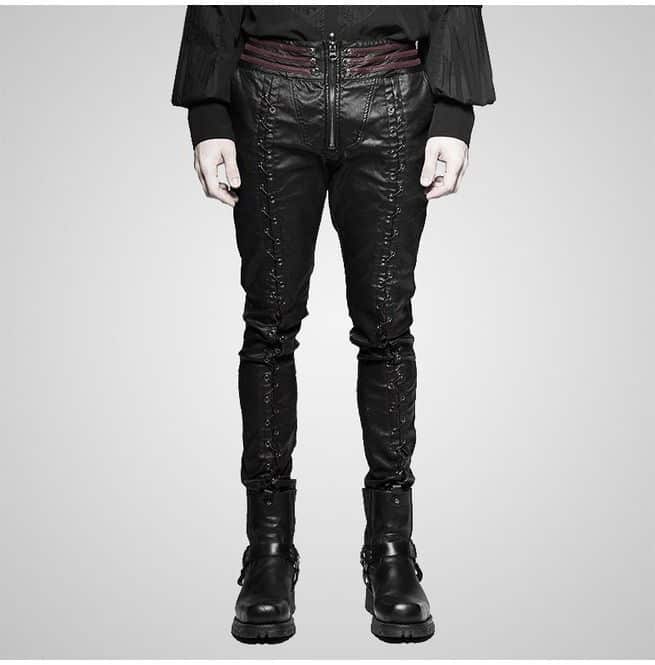 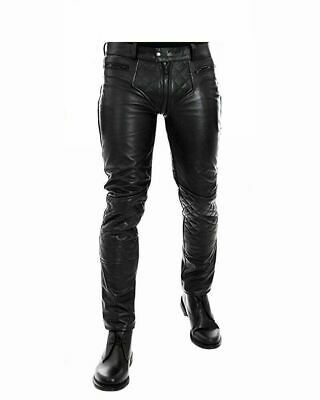 Not just for surgical purposes, a mask is a great accessory that will complement your punk outfit. Punk masks are usually made from black leather, and many of them feature detailing like button holes, miniature spikes, and studs. This is a great way to add an instant edge. 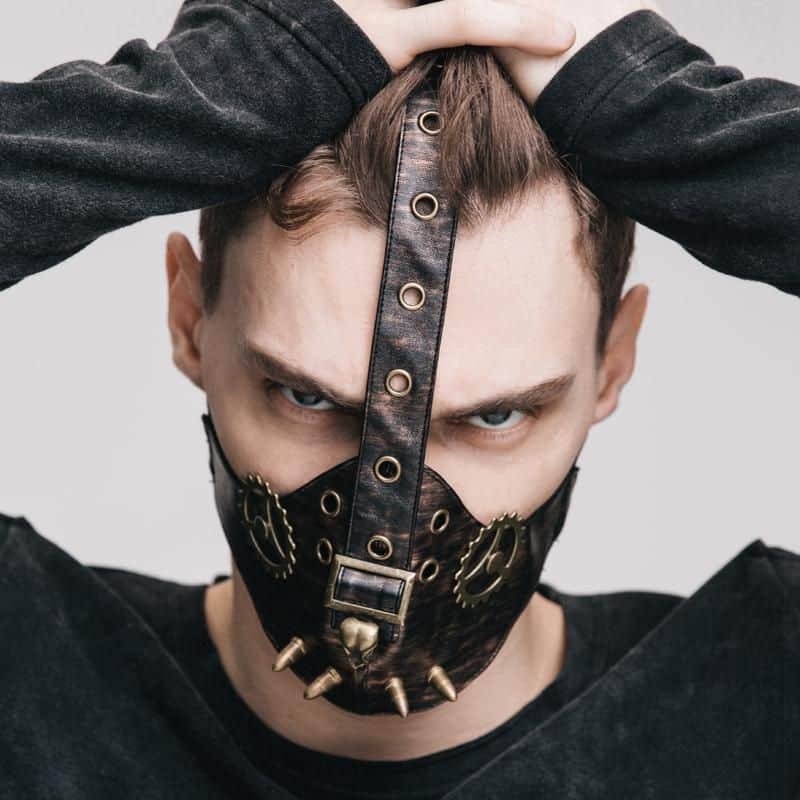 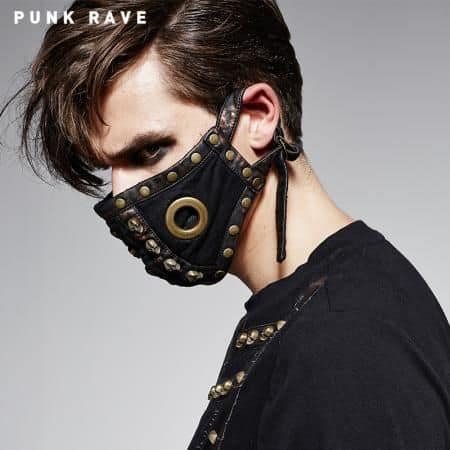 We’ve talked about how punk style is all about expressing yourself, and buttons are a great way to do exactly that. In the days of the style’s roots, a lot of the feelings that were generally expressed were anger at the injustice of society, or at the “establishment” in general. Thrift stores are a great place to find vintage buttons. 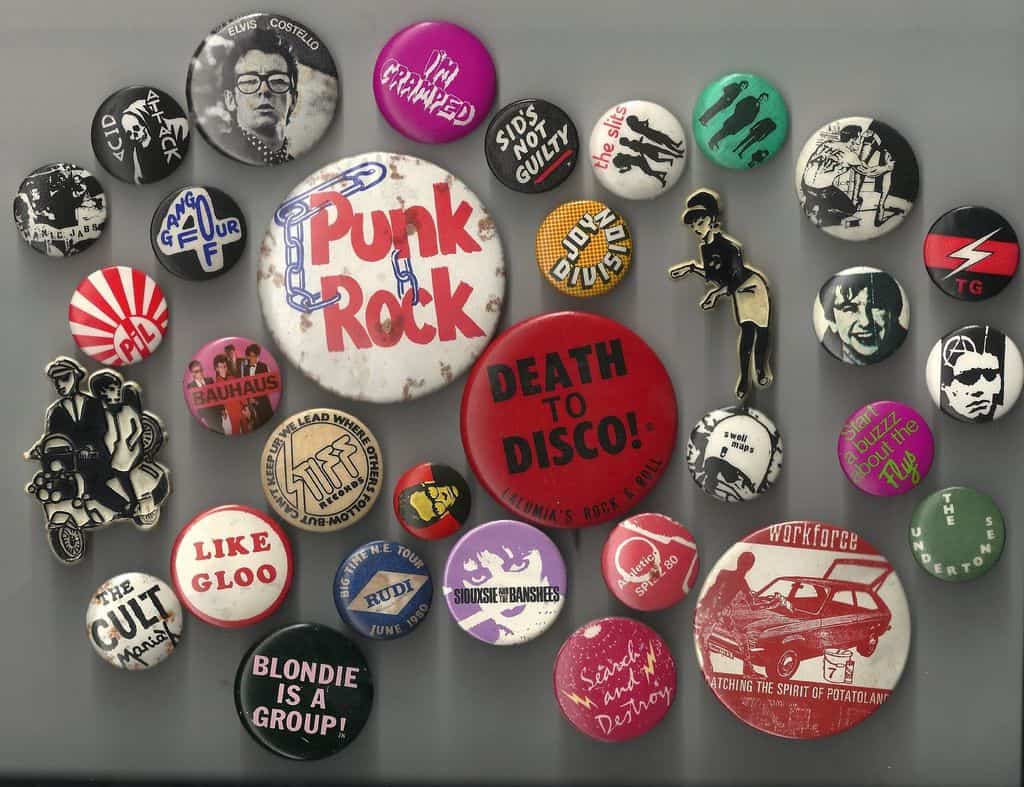 Much like buttons, patches, and safety pins, buckles are another way to accessorize and as a result differentiate your punk clothing. Buckles are best used on pants, jackets, and boots, but again, the only limit to their implementation is your creativity. And if you’re dressing in a punk style, you’re probably already pretty creative to begin with. 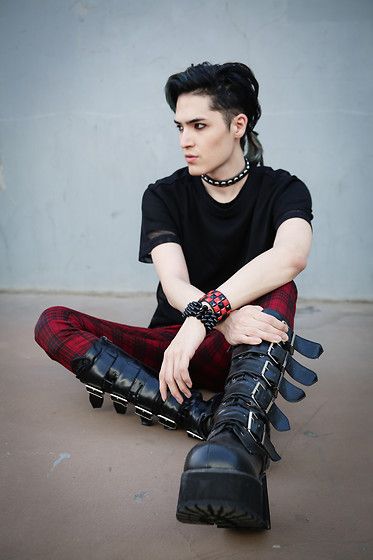 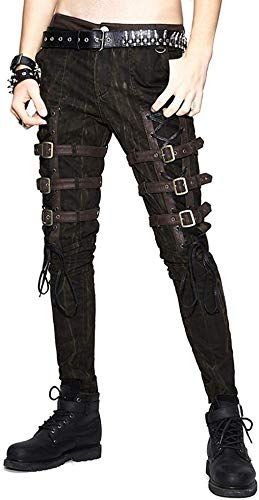 A fashion trend that picked up in the 1980s, thick black studded belts are an important element of punk fashion choices even today. Although the pants that are worn in punk fashion are usually tight enough to stay up on their own, this belt is not so much worn for its utility but more for its style; it really has the ability to pull an entire outfit together. 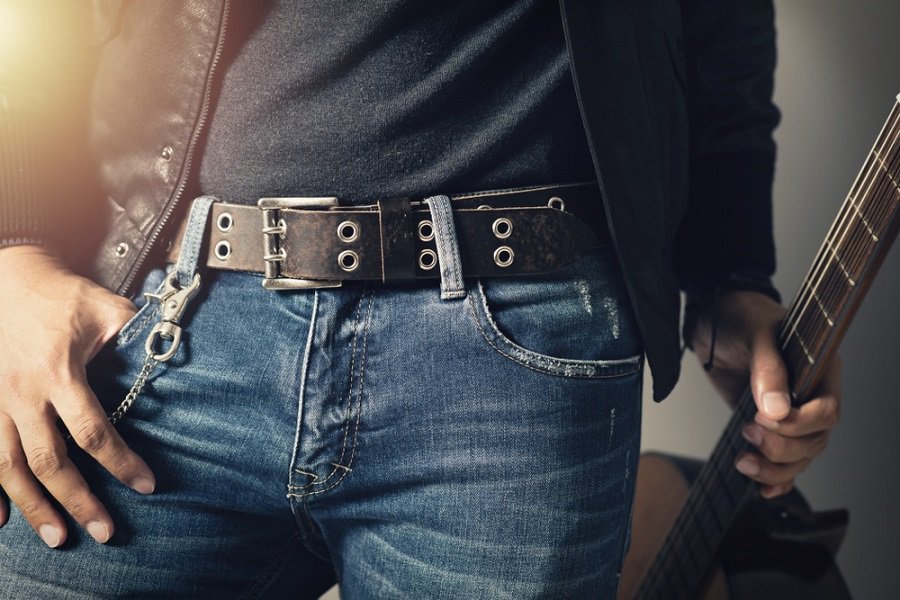