Men fashion from the 90s’ was frivolous and casual.

“Come as you are…” from the Kurt’s Cobain song “The Teen Spirit” became an anthem of the era and so it reflected on the daily fashion. The 90s did escape from the 80s marginalization, but still remained grungy. 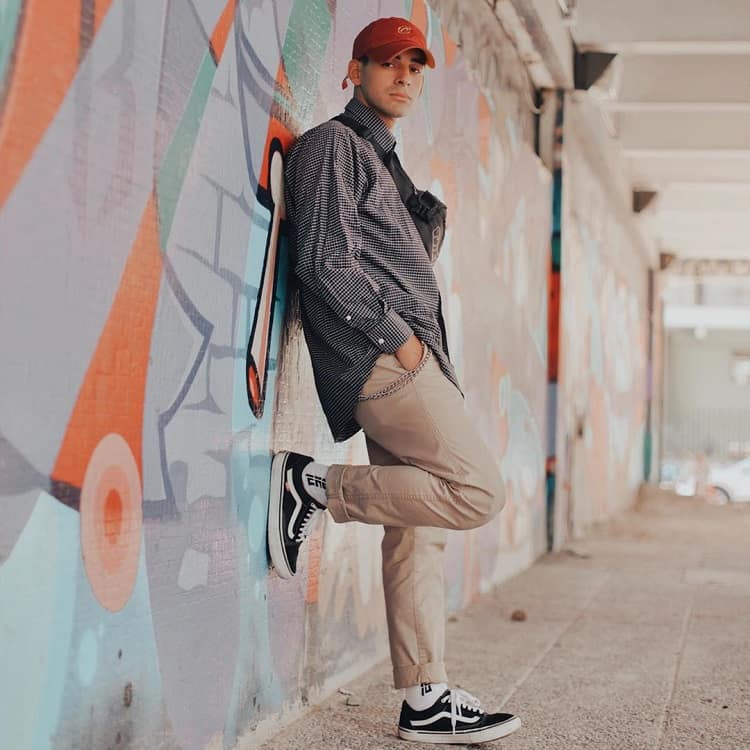 In this article we’re going to show you how to make a slow transition into the “young and careless” times by exposing the necessities and inevitable trends.

In order for you to rock this day with this 90s vibe, scroll down to see the full and explicit guide to the 90s fashion for men.

A white cotton T-shirt is where all the fashion realm actually begins. The epitome of comfort became the “brick and stone” of the previous decade.

The only thing that was so important about the basic T-shirt was that is had to be made of a premium quality cotton and it was supposed to be loose in style.

It was often paired and mixed up with a grungy biker jacket and baggy or ripped blue jeans.

At that time time jeans were the whole “religion”. If you didn’t own a pair of blue baggy jeans – you weren’t in the trend. Those were often matched with a bright color sweatshirts and white sneakers.

The baggy jeans became the real quintessence of the streetwear and were worn on a lower hip.

One thing, that nobody is taking into consideration, is actually going to change the way you look at fashion in general.

A waistcoat is a piece that was popular back in the 90s and you should include it into your wardrobe as well.

Bring that vibe and become more fashion educated than you were before!

A real leather jacket was a big deal if you wanted to impress and be around the “cool” blocks. Even those who had never rode a motorbike took up this style.

The real leather jacket meant something and it was speaking to others as it reflected the “Bad Boy” attitude.

Today you do not need to wear a real leather jacket, a faux leather or eco materials will do to help you feel the “real deal” of the time.

The perfect time when jeans were a necessity and ripped jeans were often matched with a biker jacket in order to maintain the 90s fashion vibe.

The time was rebellious and so were the jeans. It wasn’t just for the style itself, it was for the emphasize of the subtle edge of the time.

At first, the combat boots were the predominant belonging of a rock and punk subculture, however in time it became a very comfortable piece of a garment for every man out there.

Usually, those were worn with cargo pants, ripped jeans accompanied by a flannel shirt or a biker jacket.

Today is is the one piece of garment that has made a huge return back form the 90s.

Do you remember your dad striking a pose in the color-block windbreaker? I do, and this is why it is so important to revise this 90’s style epitome.

Those were usually worn with blue banana jeans and white sneakers or in full sport casual chic projection of the retro intro of today.

A shirt that had a casual edgy aura within the 90s. Often it was worn in a mixture with a printed loose T-shirt or just tied up down the waist.

It clearly had a rock-n-roll energy especially for those that had a free teen spirit.

This kind of an outfit was often matched with white or black Converse shoes or combat boots as well.

A streetwear essence was a loose city name printed sweatshirt. It was often worn in a total sports style matching with blue jeans and sneakers.

This was the vogue time in which everybody wanted to be in the “melting pot” of America. It, of course, reflected on casual daily fashion.

Were you wondering where this sock fashion came from? Yes, you’re right! It’s the 90s fashion for men! The socks had to be visible and most of the times the brand has to be shown.

Usually men matched those with blue jeans and either print or color-block oversized sweatshirt creating an urban look.

You are not able to imagine this beautiful generation without white Converse and Nikes. Everyone was indulging in these running shoes.

White shoes were something special and seemingly casual and careless. The laidback atmosphere continued and all the subcultures gave up for a pair of those sneakers.

Those signs were all around the world which actually created a reflection backward to the past years of the 80s.

You could see these signs everywhere from the baggy jeans back pocket print or a patch on the textile backpack or even a necklace.

Accessories took a very dominant place in the fashion of the 90s. Just the glasses could tell whether you were in the trend or not.

We had a great range of colorful frames and shapes. Those were predominantly round and wide, old Celine-like shades.

All celebrities and famous persons were strolling in those showing off with the “hard to get” attitude. Just look at Justin Timberlake and his complimenting hairstyles!

A tip from a stylist

Stop wasting your time looking for the most appropriate 90s styling! Take those easy to follow steps to get that grunge outfit for yourself.

You don’t have to spend a lot to be in the trend. Start from incorporating small or basic things first. We have mentioned that basics was a fundamental thing for the 90s style and so it is right now.

Get that white T-shirt and those white socks from our shopping guide. We know you might already have the blue jeans in your wardrobe, so just try to roll those up to show off the brand new training socks.

You could also try this outfit with a loose print sweatshirt with your favorite US State naming (P.S. Mine is Chicago). Pair it all up with your comfortable Converse shoes and “Voila”!

You are ready to rock this world with the 90s trends!