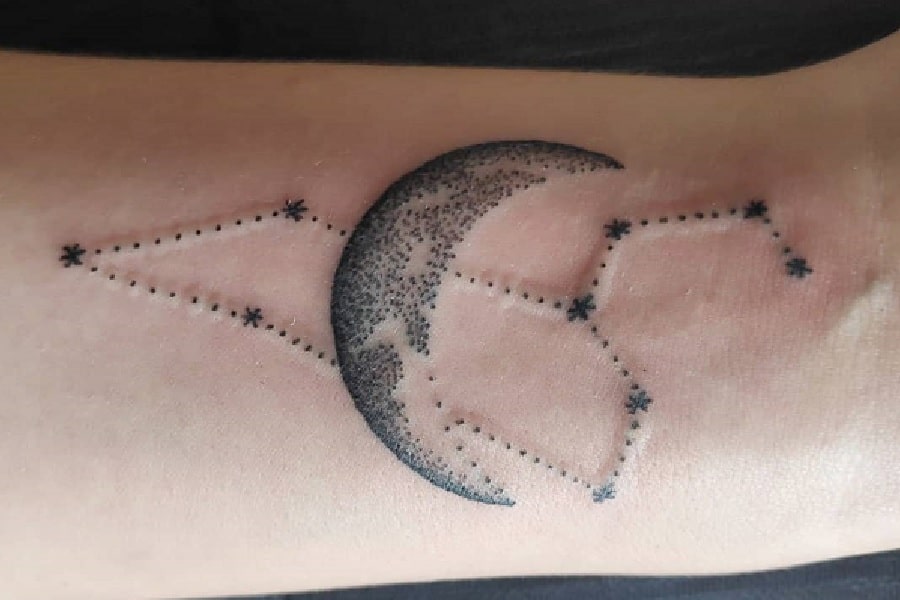 Leo is the fifth sign of the Zodiac, following Aries, Taurus, Gemini, and Cancer. Leos are ruled by the sun and the element of fire. The various Leo symbols make tremendous tattoo designs.

Originally, the Leo constellation was deciphered to be the shape of lion by early astrologers and star gazers.

Time has passed and the Zodiac is used more often in everyday life – with the mighty lion only strengthening its position as the chosen animal for the Leo zodiac symbol.

Lions are a charismatic symbol linked with nobility, strength, honor, and tenacity which individuals often aspire to in their everyday life.

The sun fixes the Leo sign personality type into a consistent, mostly unchanging set of traits for both man and woman. Not coincidentally, traits of the lion’s behavior and personality are attributed to people sharing the Zodiac sign and Leo constellation.

The Leo Constellation was deciphered to be the shape of lion by early astrologers and star gazers. Time has passed and the Zodiac has been used more often – with the lion symbol only strengthening its position as the chosen animal for the Leo zodiac symbol. Not coincidentally, traits of lion’s behavior and personality are attributed to the people sharing the Zodiac sign and constellation.

As the examples above show, a Leo constellation tattoo doesn’t need to be just a trail of stars in a rough lion shaped pattern. They can be fully realized star designs, incorporated into different images – such as the purple hued Disney Lion King logo – or simpler technical work such as asterisk style stars amongst a night sky of dots and a hangnail moon.

There are other cool interpretations. The Leo constellation inside a sun with the cookie monster part-through-to full moon is a unique concept, and the silver colored stars amongst wicked grayscale shading and striking purple lotus works brilliantly.

Remember, if you feel you can bring a Zodiac constellation tattoo to life, make sure you explore the opportunity to do so, and if needs be get a temporary tattoo first for a test run.

These tremendous black and gray Leo tattoo ideas allow each tattoo artist to explore a broad range of image types and technical applications, by combining the constellation patters with the animal symbolism of Leo the Lion and the Leo astrological symbol.

There’s some beautiful gradient shading applied in these versatile tattoos. There’s subtle, delicate grayscale in polar bears and lion’s manes, versus the brash and aggressive ink technique used in others. I like how most of these Leo tattoos opt for white highlights in amongst the shadow, to strengthen each image and provide an extra finishing touch to the body art.

As is the general case for Zodiac tattoo design, these examples opt for the Leo symbol or lion motif to bring each color tattoo to life –the black linework or solid ink creating a frame within the art for the tattoo artist to get creative with well-placed color.

The balance between bright color – Leo is a sun sign – with other black ink parts create beautiful contrast. I particularly like the use of crackling golden watercolors to feel like the rising sun warming their tattoo. Others use an effective fully saturated single color palette to work in opposition to black or shaded ink.

These examples combine clever ideas, such as line and formwork with geometric principles to make a forearm tattoo, or delicate dotwork against supporting themes like the planets and solar system, to achieve finely detailed, top quality tattoo art.

I particularly like how these delicate tattoos depict Leo tattoos amongst the other star signs, such as the string of Zodiac signs across the collarbone, or the side tattoo using the star sign in conjunction with the Libra scales and Sagittarius bow and arrow.

Rather than opting for a simple glyph style Leo tattoo, each subject in these tattoos have threaded flower designs into each tattoo.

Leo is an August and summer star sign, so sunflowers or the August birth flowers gladioli and poppies are thematically popular choices for those looking to use flowers in a Leo tattoo.

In a lot of ways, to truly capture a Zodiac tattoo idea, the use of geometric design needs to be applied. They’re fundamental in using planet and solar system themes, or for balancing and arm tattoo and building a piece.

I love how these examples use vastly different interpretations. The beautiful whale surrounded by shapes along a central line stands out, as does the half lion face in the path of the planets. My favorite tattoo design from these is the chest tattoo with the half realistic lion pierced by a spear, with his back half a coruscating number of fractal angles and shapes.

The astrological symbol for Leo – also known as a glyph – represents the head and mane of the lion. It can often look like a stylized letter N, with a circle attached to its first foot. Zodiac animal glyphs are based on the general pattern of the stars in their corresponding constellation.

These beautiful Leo symbol tattoos range from short, sharply etched and precise line tattoos on a forearm or wrist, through to the Leo Zodiac symbol for making up part of a larger piece of body art. The glyphs are extremely versatile and have enabled the wearers and their artists to work on different styles, from tiny tattoos in black ink, through to massive Astrological expressions surrounded by flowers, a sun tattoo, or balanced on a scale.

There’s superb versatility of expression in these examples of linework. Each lion design or Leo sign is drawn with clarity, skill, and attention to detail in line flow or hatch work. They’re standout pieces that belie the difficulty in execution.

Some will be filled in with color or grasycale over time while others – such as the beautiful blue geometric big cat balancing perfect circles against the Zodiac sign – will be left as they are.

A Leo’s personality in the Zodiac is strong, brave, honorable and ferocious, all elements of personality that they are said to share with the King of the Jungle.

These lions are portrayed in a range of different styles, from tribal lion of black to almost realistic photograph style. I particularly like the abstract, dark aspect lion tattoo cut through by the Leo constellation, or the magnified big cat that looks just like the one from the Wizard of Oz.

Getting matching horoscope tattoos is a great way for friends, family, or couples to display their love for one another in ink. Using a Zodiac symbol, glyph or animal motif allows for individuality with a matching star sign tattoo yet still create the inclusion of having body art together.

There are cool elements of flair in expression – I really dig the jutting horns of the Aries tattoo against the Greco classic lion, while the tricky Pisces goldfish is also cool. For mine though, the twin Leo matching tattoo of half lion face/half lioness face on the couple’s inner forearm is a truly wonderful piece matching concept with execution.

These simple, minimalistic Leo tattoos are pure. Each example is just a simple, small tattoo of the Leo glyph in black ink etched tastefully onto the skin. They’re either hidden away, or in places popular for tiny tattoo – the wrist, inner forearm, shoulder – to draw a comment or glance from others.

These examples could quite easily fit into the other areas above, as they do an excellent job depicting the more common Leo Zodiac tattoo subjects of glyph, lion, or constellation.

But they are unique Leo Zodiac tattoos in that their application features stunningly sharp dotwork, a different style of image – a lighthouse, or spaceman and pet dog – or a combination of innovative technical flourishes to create individuality within the ink.

What does a lion tattoo symbolize?

As with the general tattoo style of lions, Leos in the Zodiac are also strong, brave, and honorable. Leos are often projected as dominant, goal driven leaders and conquerors, known for determination and tenacious will.

The King of the Jungle is often used in leo tattoo design to describe power, physicality, tenacity and leadership.

A person could admire the animal—a male lion is the head of pride, while the lioness leads the hunt. These are two powerful roles with worthy traits people want to embody within their own life.

Why are lions the animal Zodiac symbol for Leo?

Originally, the Leo Constellation was deciphered to be the shape of lion by early astrologers and star gazers.

While the Zodiac sign and the beast of the Savannahs share popularly published characteristics, the Nemean Lion is also influential in the animal star symbol crossover, although it was a much less noble creature than modern big cat portrayals.

In Greek mythology, the Nemean Lion was a beast that lived at Nemea, terrorizing the townsfolk and kidnapping beautiful young women. The lion could not be killed with mortals’ weapons because its golden fur was impenetrable. The Nemean Lion was eventually killed by the hero Heracles, who strangled it with his bare hands, then used its fur as specialized armor.

Looking for more King of the Jungle tattoo inspiration? Click on the links below for more awesome galleries featuring the best in Zodiac and star sign ink: