Ivy League or preppy fashion is timeless and easily distinguishable, centered around the three C’s: classic, collegiate, and clean. It’s a refined style that’s unapologetically all-American, but wildly popular all over the world.

Here are the essential elements of Ivy League style to help you get the preppy look. 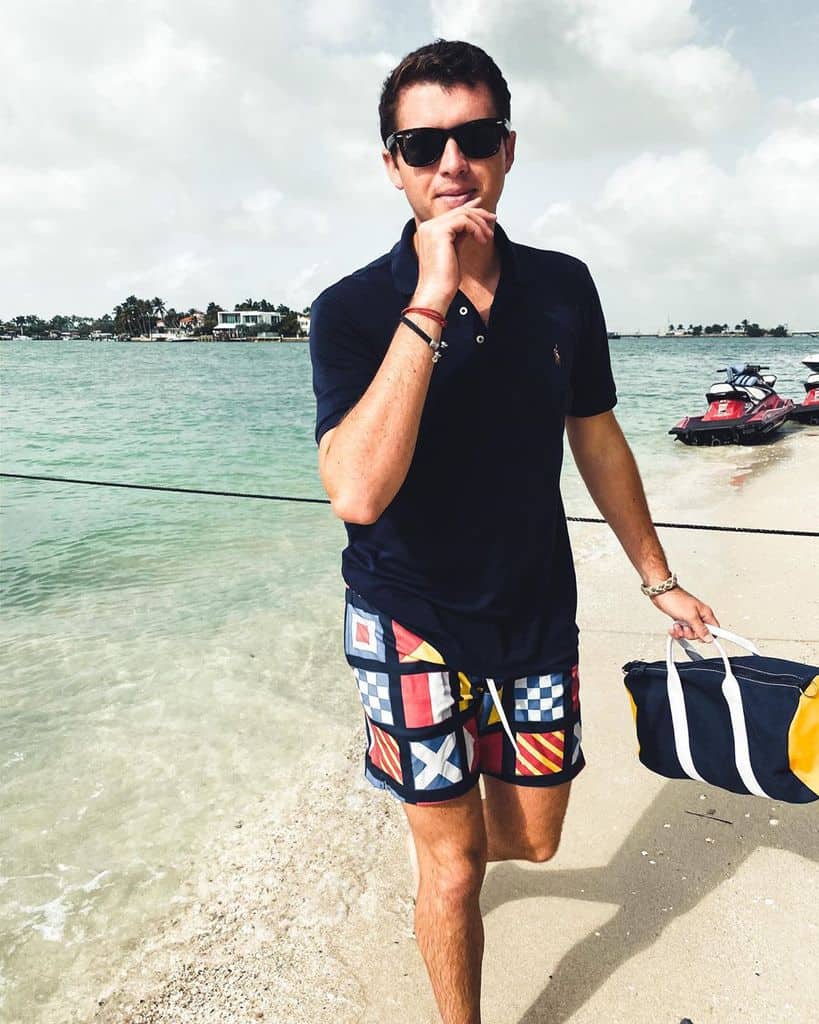 Perhaps the single most iconic item of clothing in any preppy wardrobe is the classic polo shirt. Although Ralph Lauren did an incredible job of making his brand synonymous with the shirt style, here we’re talking about the polo shirts typically worn on a golf course, not an actual Polo shirt.

This is one of the more casual pieces in the preppy style, but it dresses up or down really well, depending on whether you wear it alone or pair it with a sweater or blazer. Although they come in a rainbow of colors, the most classically preppy are navy, white, and pastels. 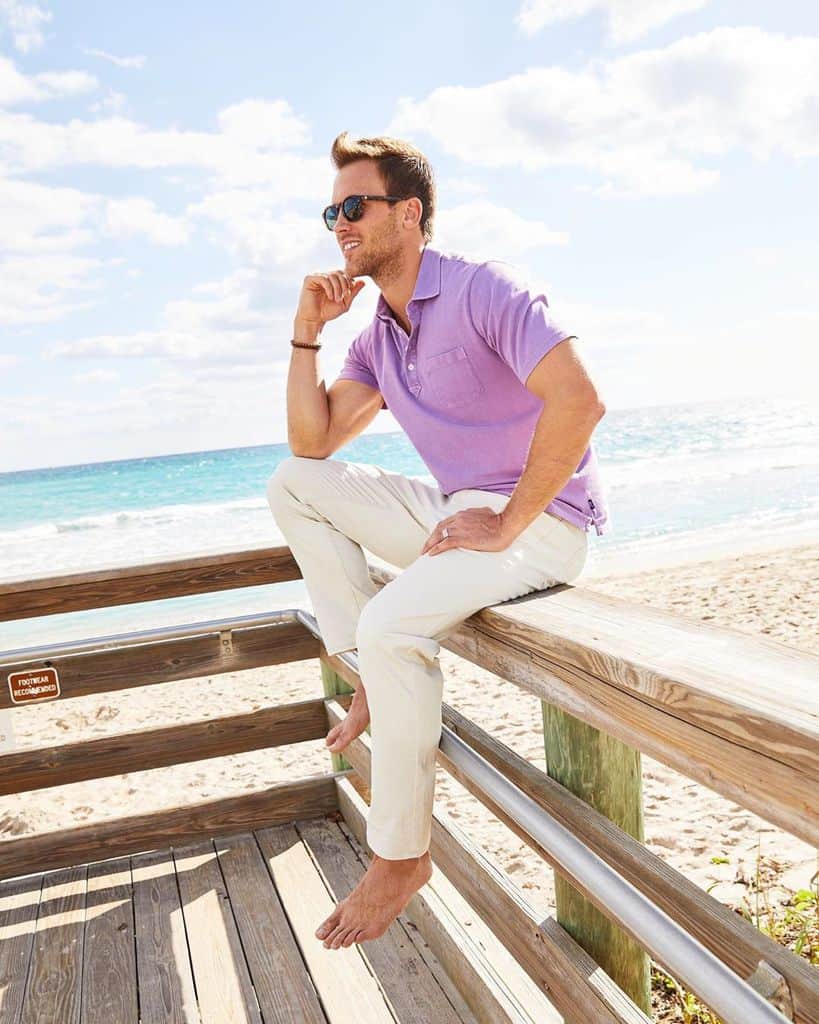 The undisputed king of polo shirts is the Ralph Lauren polo, but Vineyard Vines Performance Polos shouldn’t be overlooked, either. Wear one on its own with shorts or chinos for a casual look or throw a blazer or sweater on over it for a slightly more formal vibe.

They can be casual or dressy and they go well with anything. Much like polos, subtle is best if you’re going for a classic look – think solid pale pink or pastel stripes –but there are plenty of bright, busy patterns available if that’s more your speed.

Button-downs should be some of your wardrobe foundations, so it’s worth spending a bit more on a couple that you love and fit you well. Consider picking up a couple of subtle plaid prints from Southern Shirt and Vineyard Vines, two that you’re sure to wear constantly. Keep a light sweater with you so that you can easily switch up your look by layering it on top of the button-down, even if you’re wearing shorts. To nail the look, push up the sleeves and let your shirt’s cuffs peek out. 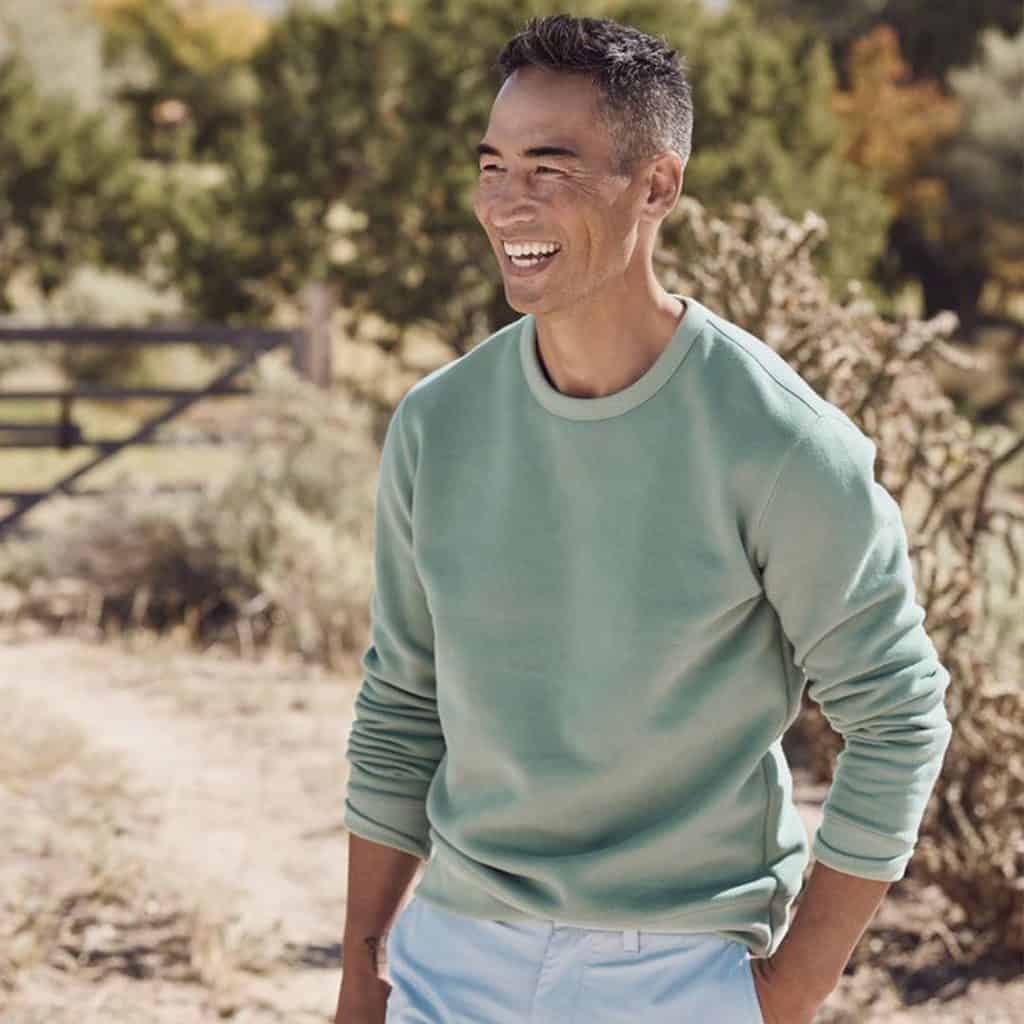 Speaking of sweaters, they really do elevate a preppy outfit. Any outfit, for that matter. For proof, think about how next-level guys always look with a sweater tied around their shoulders.

Because sailing culture is at the center of prepster fashion, sweaters come in handy all year and you’ll find them in fabrics ranging from lightweight, luxurious cashmere to heavier-duty (and functional) 100% wool. Cable knits are a timeless go-to, but more modern designs tend to be plain, begging to be worn in any setting. 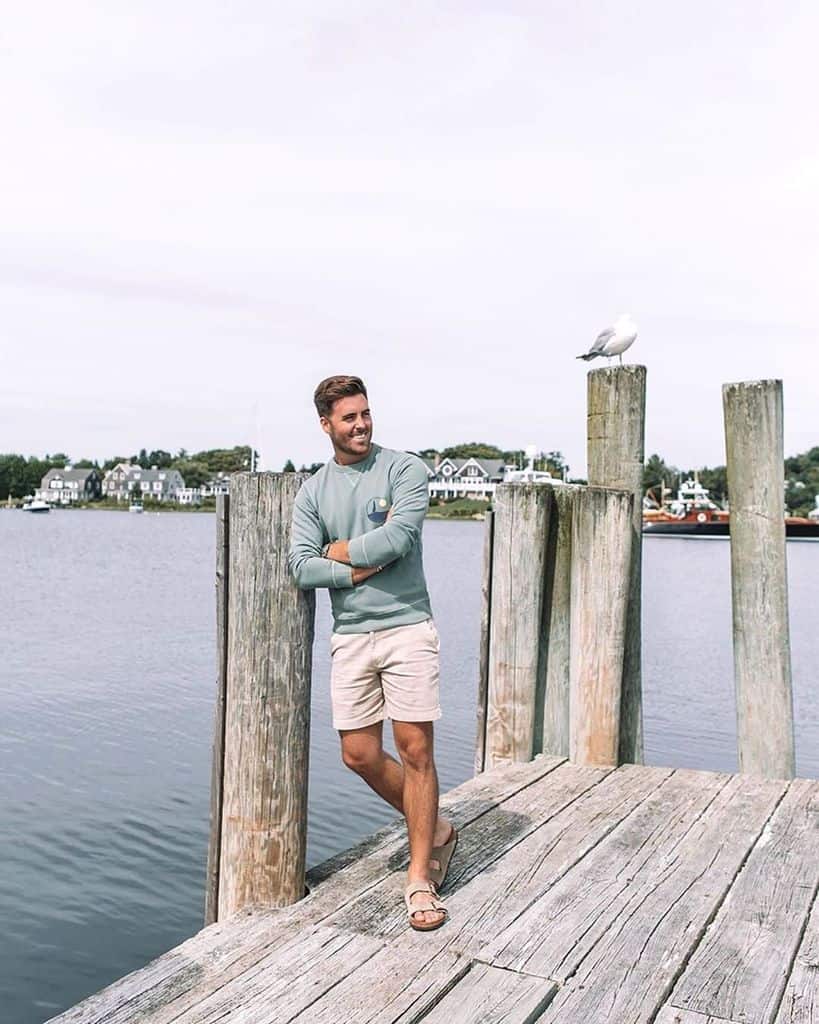 No matter where you live, you can pull off the preppy sweater look any time of year. Okay, maybe not in the dead of summer in southern Arizona, but we digress. Opt for a light fabric that can easily be put on over a polo or button-down, and be sure to let the collar stick out. Lands’ End makes an awesome 100% Supima cotton sweater and this striped cashmere one from J. Crew is everything a sweater should be. 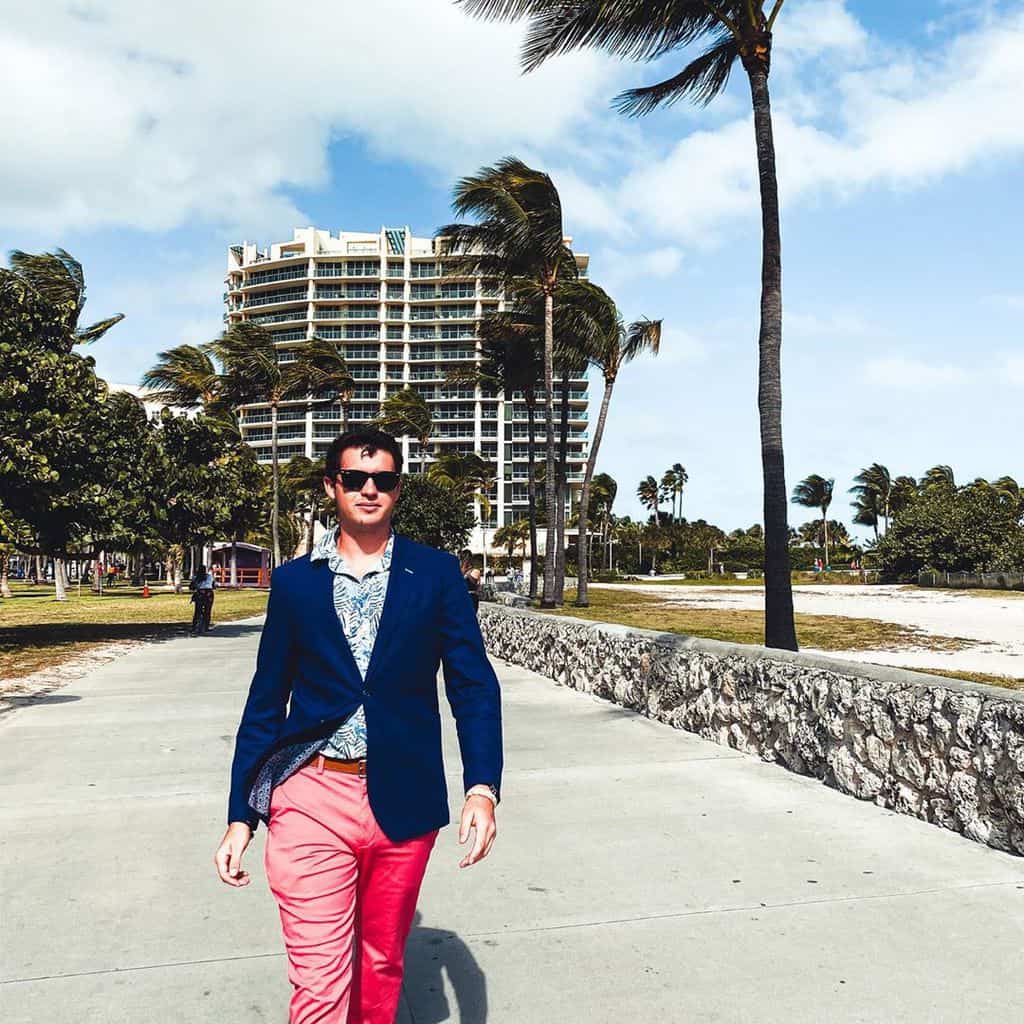 We’ve all heard the saying, “If it ain’t broke, don’t fix it.” Well, that applies here. A classic navy blue blazer is perfect exactly as it is, so there’s no need to take any creative liberties.

For one thing, it’s unbelievably versatile. You can practically turn it into a suit with the right accessories, but it can also be worn over a simple fitted t-shirt and jeans. There is one preppy fashion-specific rule to be aware of: The last button must always be left undone, no matter the outfit or occasion. 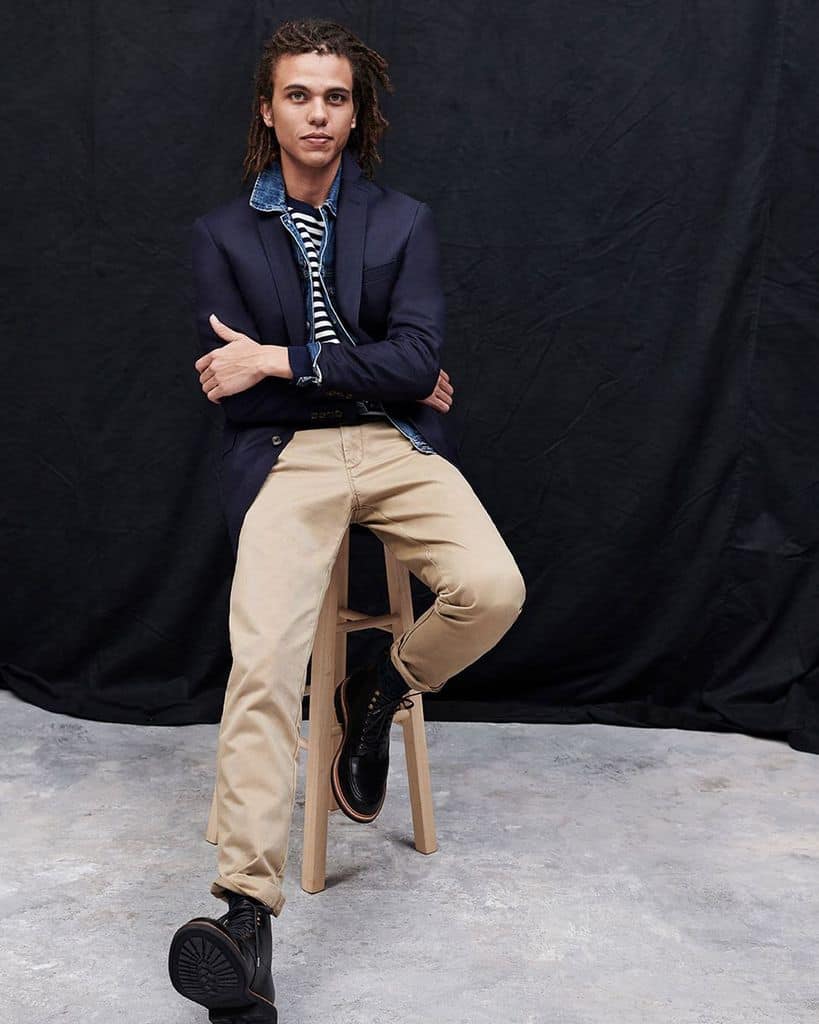 The most important piece of advice when it comes to a blazer is to make sure it fits you perfectly. You don’t want a snug like-a-glove fit, but you don’t want it to be loose, either. You’re aiming for it to be fitted without restricting your movement. For your prepster blazer, you really want the best, so head straight to Brooks Brothers. Don’t forget about that last button! 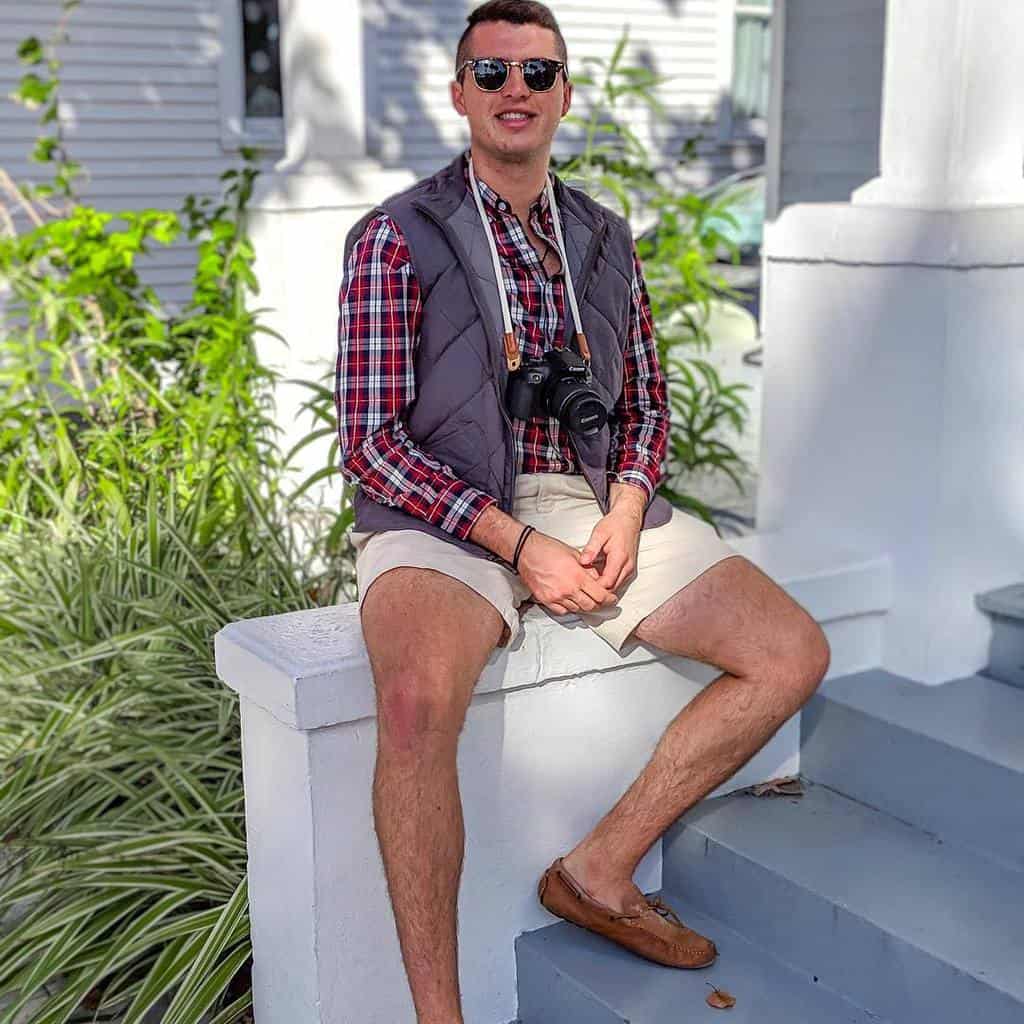 Some people love them, some hate them, but either way, boat shoes are quintessentially preppy. They’re essentially penny loafers made into slightly more athletic shoes, and the number one rule about them is that they are almost always worn without socks. Boat shoes are definitely more casual, but they can be worn with shorts or chinos, on a boat or off. If you are wearing them on a boat, they’re actually remarkably functional, as most have non-slip soles and many are made from waterproof materials. 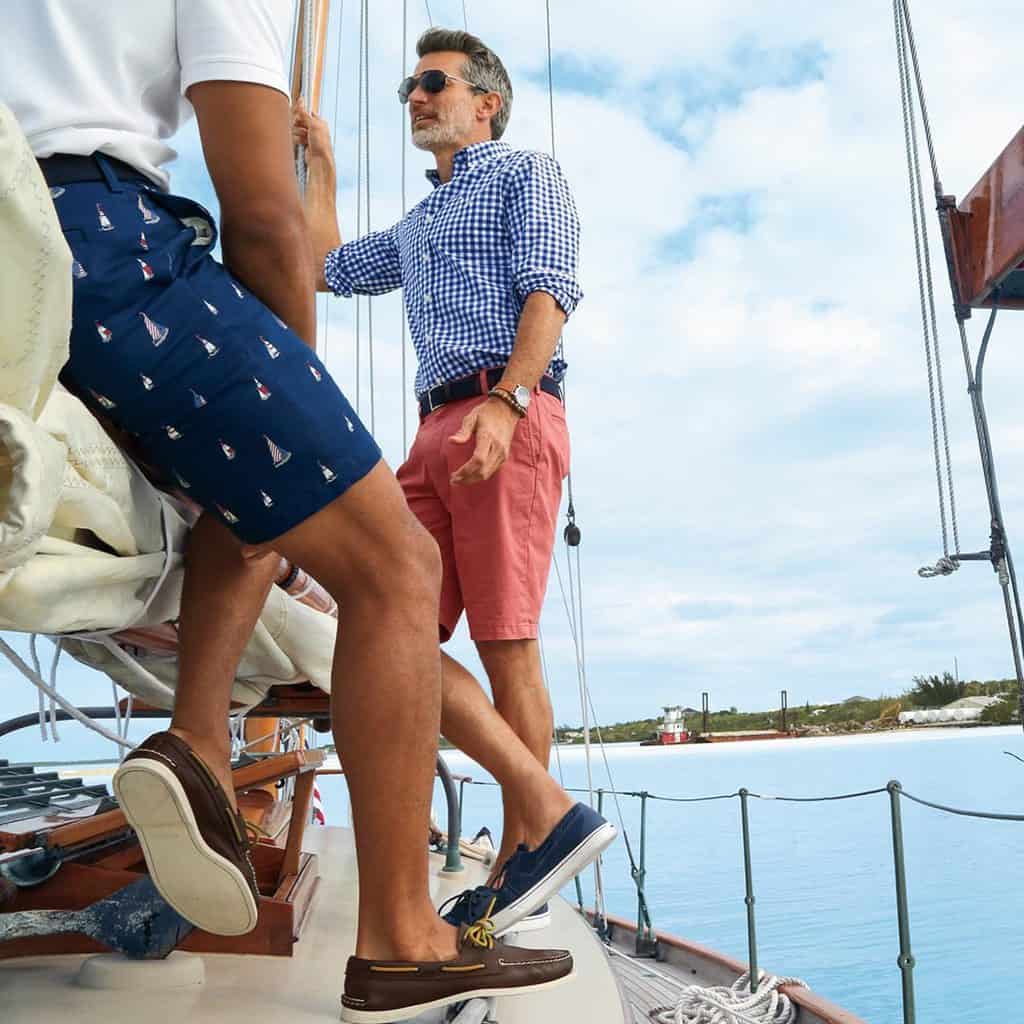 Sperry-Topsider is probably the best-known name in boat shoes, and for good reason. You can’t go wrong with a pair of the Originals in a neutral color, but the hand-sewn leather Tru-Mocs from Brooks Brothers are a fantastic option, too. 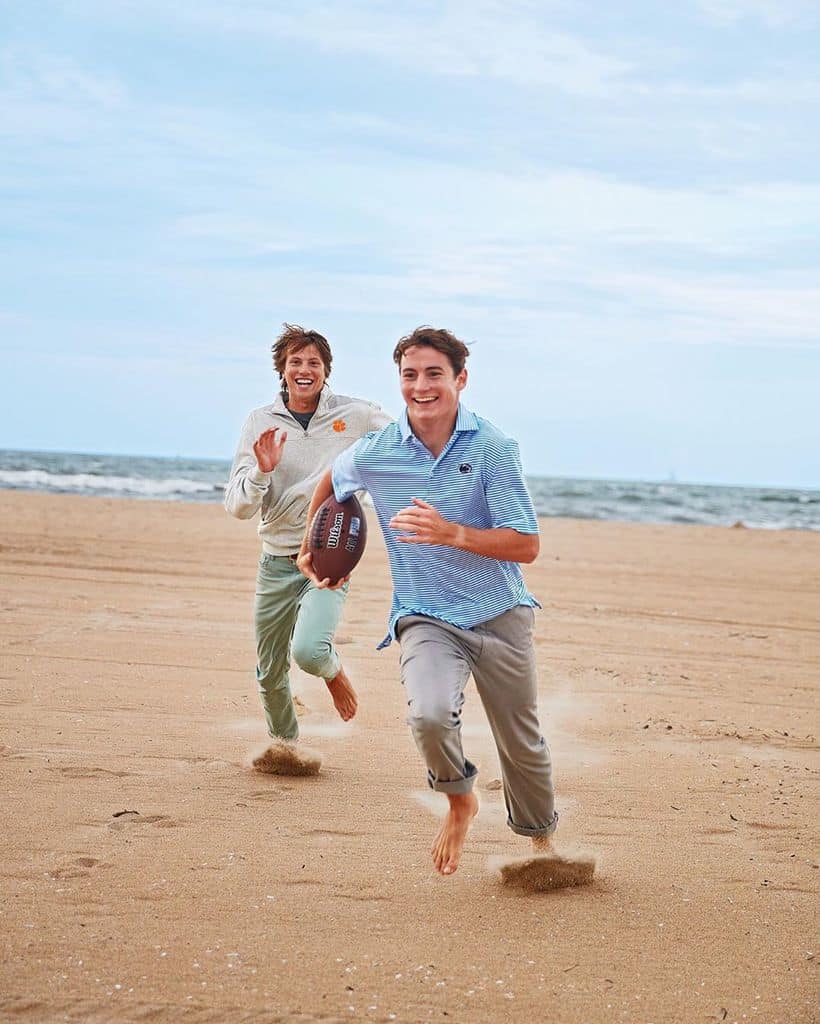 For the uninitiated, chinos are essentially pants made from lighter-weight twill fabric. The word “chinos” is often used interchangeably with khaki, but chinos can actually be any color. Khaki is the most popular color, but “Nantucket red,” a salmon pink color, isn’t at all uncommon. Although you’ll come across pleated chinos while shopping, in preppy fashion only flat-front styles exist. 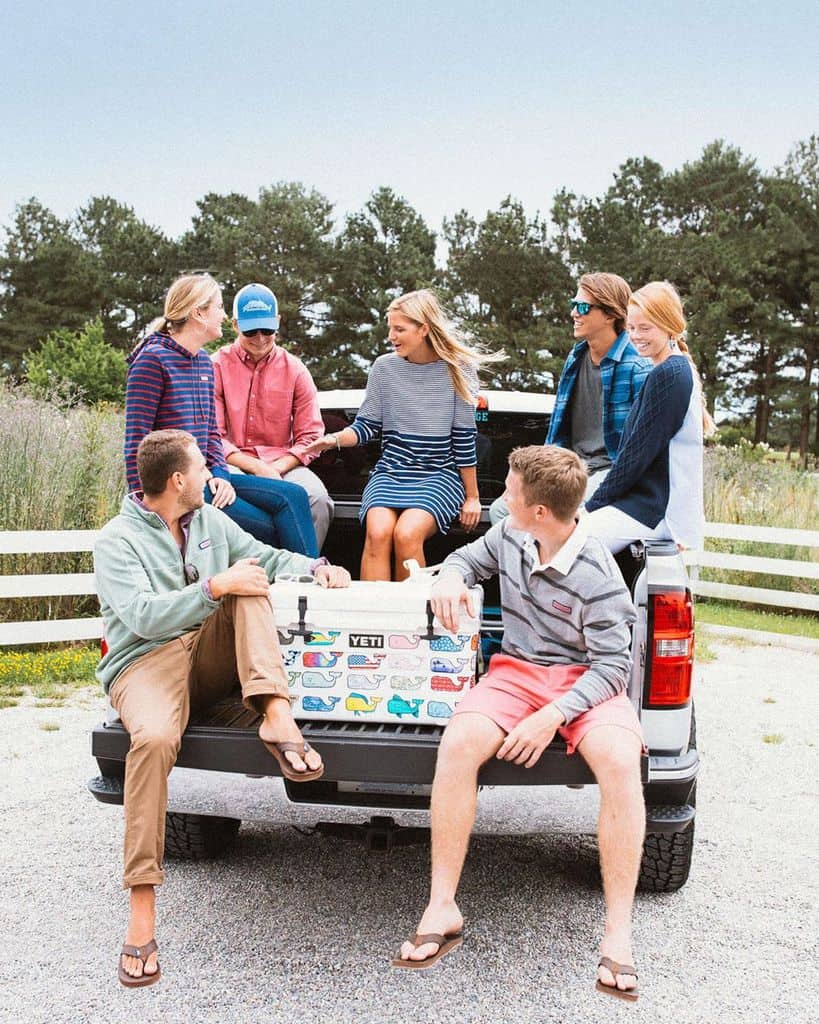 Comfort is key, so the only real rule when it comes to chinos is to find a pair that you’ll enjoy wearing. If you want to go the classic route, J. Crew’s Slim-fit Stretch Chinos are awesome (and affordable!), but if you want something with more personality, Vineyard Vines is the way to go. You’ll often see men wear them with the ends cuffed up, but that’s more of a personal preference than a rule. 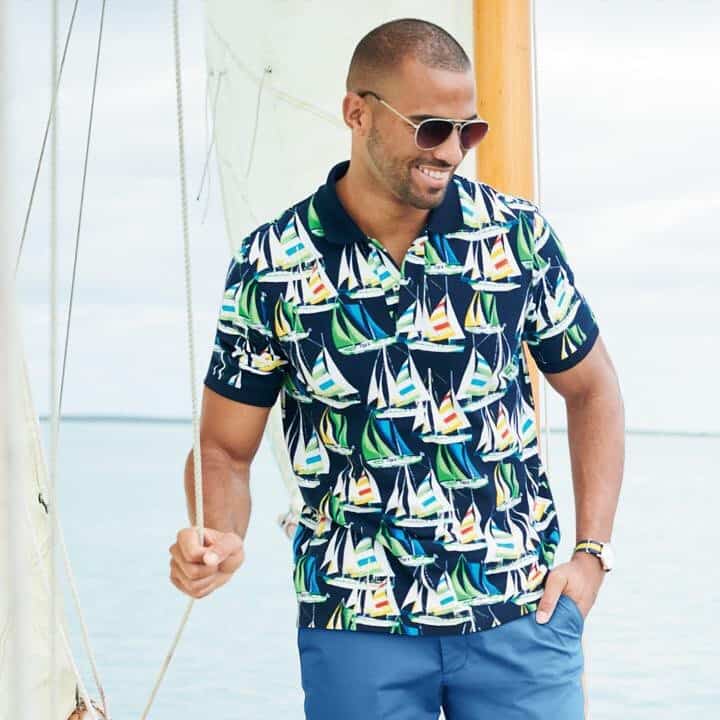 The finishing touch for any preppy look is a classic pair of sunglasses. True prepsters are rarely seen without their Ray-Bans, tying back into the style’s coastal-cool theme. Aviators and wayfarers are the most popular styles and they are almost always simple black or tortoiseshell finish with gold trim, though you do sometimes see mirrored or colored lenses. 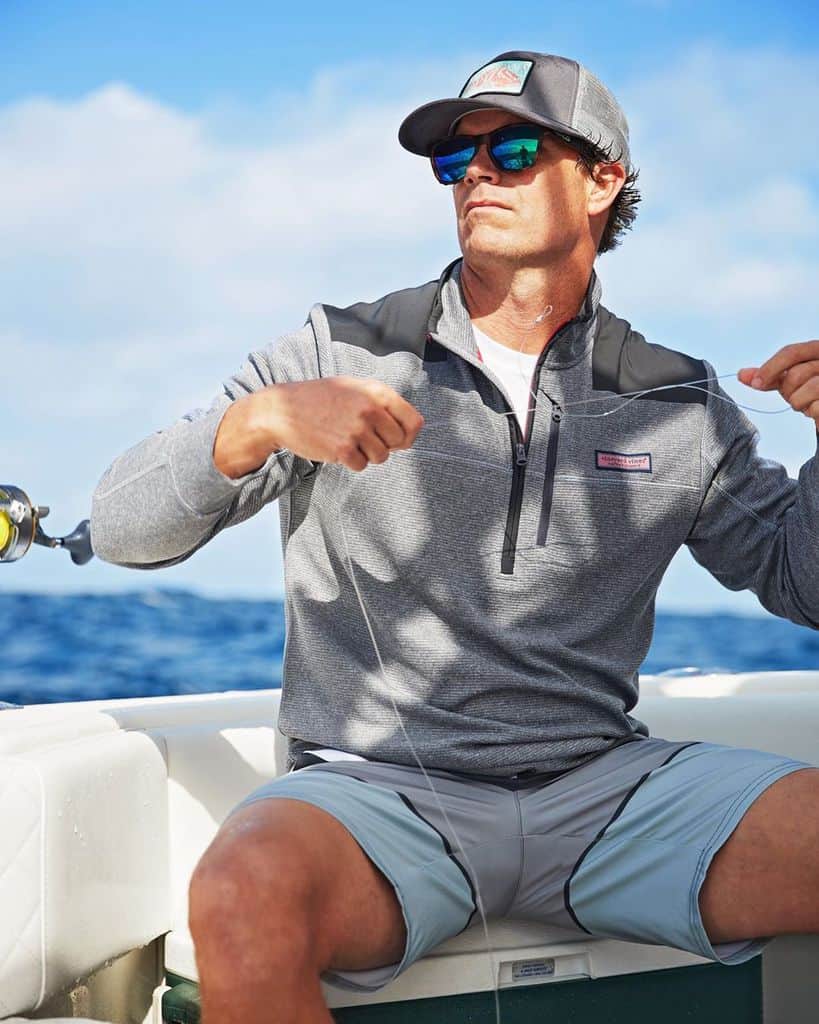 Ray-Ban, of course, makes the best Original Wayfarers out there. Shady Rays also makes some really cool wood frame sunglasses, plus the company offers a lifetime warranty and makes donations to organizations providing meals to hungry children with every order placed.

Where does the Ivy League style come from?

During the first half of the 20th century, preparatory academies or “prep schools,” became increasingly popular, particularly in New England. Typically only affluent families could afford to send their children to prep schools and at that time, loafers, cable-knit sweaters, and button-down oxford shirts were in fashion.

J. Press, a brand that’s still relevant today, became the first official brand catering exclusively to the preppy style when it opened its doors on the Yale campus in 1902.

It wasn’t long until the company had stores at Harvard and Princeton, and Brooks Brothers followed not long after. The clothing styles were based on the then-popular trends, but also took into account the active outdoor lifestyle that was so widely celebrated in New England: Sailing, rowing, golf, football, and tennis.

With Ivy League college students having access to deep pockets and exclusively-designed clothing right on campus, the style caught on and spread like wildfire. A new fashion subculture was born.

In 1980, Lisa Birnbach released a book titled The Official Preppy Handbook, intended to be a satire of the upper-class New England college kids she’d grown up with. Instead, it was met with a rather surprising public reaction and became a highly regarded “how-to” guide.

The prep style and culture were suddenly on center stage for the entire world, not just Ivy League college students and their families. This marked a distinct shift and “prep” became a global fashion, not just a trend.

Unlike many other styles, preppy fashion does actually have several rigid rules and they go way beyond the three C’s.