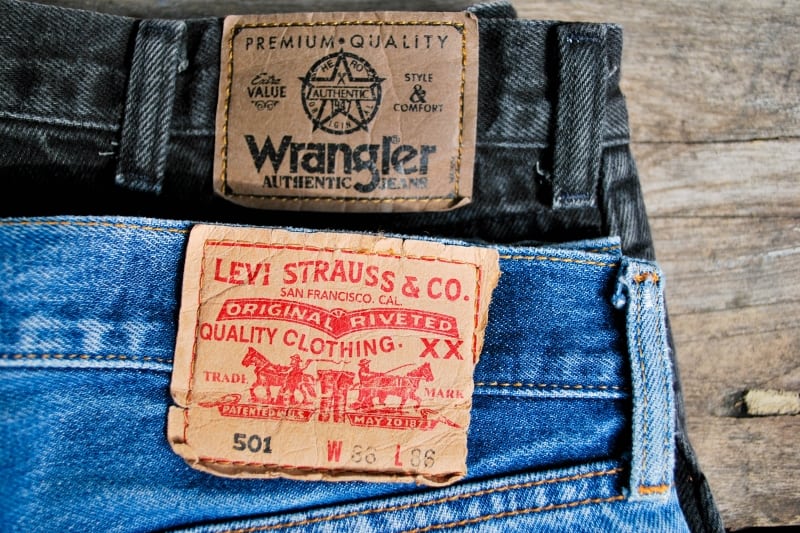 Levi’s vs Wrangler: Everything You Need To Know 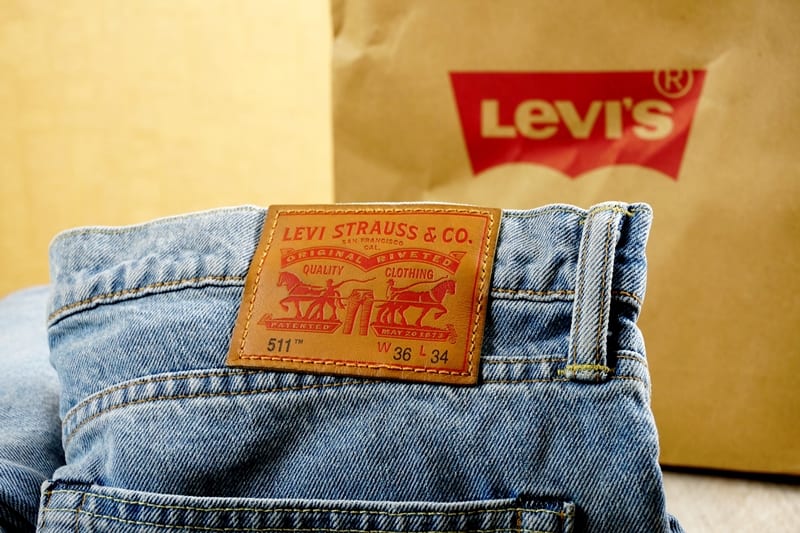 From the beginning, Levi’s denim overalls were made for cowboys, lumberjacks, and the working class man. Today, Levi’s jeans are an American tradition known for their quality and array of styles.

The company got its start when Levi Strauss, a Bavarian immigrant, followed his brothers to New York where they had a dry goods export company. Levi saw how the West Coast market was growing and opened a branch in San Francisco. While in the city, Levi had a client, Jacob Davis, who wanted to go into business together. The business? Jeans reinforced with metal rivets to prevent the garment from falling apart.

Since Davis had originally purchased the denim fabric from Levi, joining forces seemed like the next natural step. Davis wrote to Levi to suggest that the two men hold the patent together. Levi saw the potential for this new product and agreed to Jacob’s proposal. The two men received patent #139,121 from the US Patent and Trademark Office and on May 20, 1873, and blue jeans were officially born.

Pants were not acceptable for women, and for a long time, Levi’s were only made for men. However, with World War I and the men going off to fight, the women stepped up and went to work, borrowing the men’s jeans. In 1918, Levi’s launched the Freedom-Alls, a one-piece cotton dress with balloon trousers. The brand launched their Lady Levi’s in 1934, the first-ever jeans made for female silhouettes.

Levi’s, and jeans in general, became a symbol of freedom and rebellion against the establishment and cultural norms. Levi’s are iconic in looks and in history, and the brand recognizes and understands how important it is for them to continue to guide their customers with style and innovation. They pride themselves on staying ahead of the curve. Each product shows acute attention to detail and quality.

They say imitation is the sincerest form of flattery. That being said, counterfeiting is real and there have been many reports of fake Levi’s being sold. Checking the stitching, buttons, rivets, and tabs for the official Levi’s logo and L.S. & Co. stamps is the best way to know if they are the real deal.

Levi’s products come in a multitude of materials, colors, shapes, and sizes which means there is something for everyone. The price ranges from $45 – $70 for their popular and premium apparel. The custom cuts from their “Made and Crafted” line can cost up to $200. 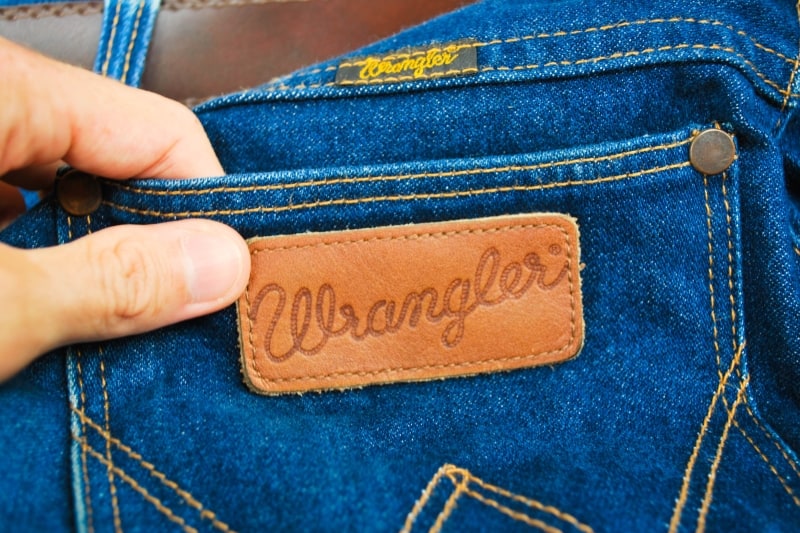 This American brand is part of Kontoor Brand Inc., the owner of Lee, and was founded by C.C. Hudson. He moved from Tennessee to North Carolina to work in a textile factory. When the plant shut down, Hudson bought some of the sewing machines and started his own business with his brother, called the Hudson Overall Company’ n the loft of a local grocery store.

In 1919, the business was doing well and they changed their name to the Blue Bell Overall Company and moved to a bigger headquarters. In 1943 the brand got even more fame and once again changed its name, this time to the iconic Wrangler.

In the 40s, Wrangler hired Rodeo Ben, a Polish tailor who had found fame working with rodeo stars and cowboys. In 1947, Wrangler designed the 13WMZ jeans that were designed with zippers, yet was made to be comfortable and durable while riding. World rodeo champion Jim Shoulders endorsed the jeans, making them synonymous with that world. Wrangler has also cemented their place in the world of NASCAR by sponsoring and dressing professional drivers including Dale Earnhardt as well as country music, by making Jason Aldean the spokesperson for the Wrangler Retro© collection.

Wrangler is also part of the Better Cotton Initiative, which is a partnership to make their production more sustainable. Cotton, the main material they use, stresses out the soil and wastes an immense amount of water. The brand’s plan for the future includes using 100% sustainable cotton and green energy by 2025 and reducing water by 50% by 2030.

The brand is already working on these goals and you can tell by the intense blue of their denim jeans. The jean industry uses chemical dyes made from petroleum which is not environmentally friendly. Wrangler is partnered up with Stoney Creek Colors, going back to the original roots and getting the blue pigment from plants instead.

Wrangler jeans are hardier and sturdier in nature, making them less soft than other denim brands, but they are rugged, durable, and made of a heavier twill that fades evenly, making the jeans look better for longer. They also include a double-stitched outer seam that adds to their durability. The only potential con might be the pockets on the back, which are generally higher up and closer to the yoke, which is a classic look, but not a trendy one.

That being said, Wranglers are not typically favored by those looking to keep up with the latest trends, but instead by people with different styles and tastes whose overall aesthetic is rooted in the American south and all that has to offer, such as country music, agriculture, and rodeos.

See more about - Ripped Jeans Style Guide: Everything You Need To Know 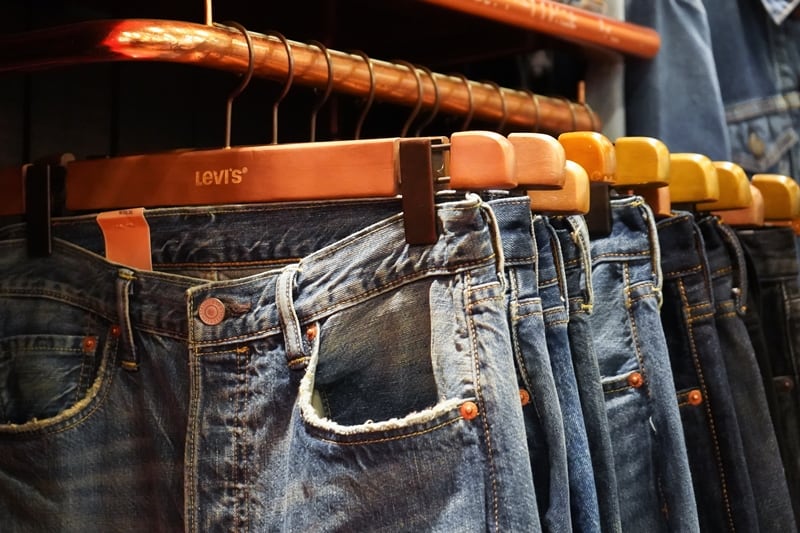 There are many similarities between the two brands, including their five-pocket, riveted, and double-stitched designs. Both brands boast sustainability, comfort, durability, and wearability.

The main difference between Levi’s and Wrangler is their styling: Wranglers tend to favor more of a working aesthetic, while Levi’s are known for their fashionable and tailored fit. Levi’s will always be associated with free will and going against the establishment. The brand has a wider array of options and costs a little more than the average cost of a pair of Wranglers.

Wranglers are made for the working man and their flared lines and signature blue tint make them stand out above the crowd. You can wear sneakers with your Wranglers but boots (especially of the cowboy variety) feel the most natural.

So which brand is better? That depends on you and your personal style. But don’t worry, both brands are made from the utmost care and quality so neither choice is wrong. Go forth with confidence!