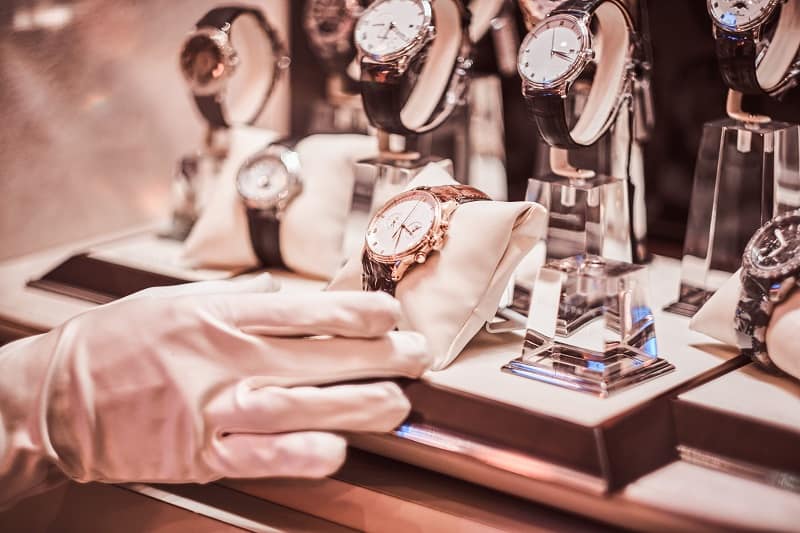 The 10 Most Expensive Watches in the World

Watches are timeless and functional accessories, with pocket watches dating back to the early 1500s. They’re also some of the most collectible items in the world, not just a fashion accessory but representative of history and culture as well.

The more rare luxury watches and those with unusual or bespoke features can easily fetch several million dollars, particularly at auction. Talk about haute horology.

Here, we take a closer look at the world’s top 10 most expensive luxury watches. Brace yourself: The least expensive one on this list still comes with a seven-figure price tag.

When Hublot, owned by luxury powerhouse LVMH, unveiled its completely diamond-encrusted “Big Bang” watch in late 2012, A-list star Beyoncè pounced on the chance to buy it for a cool $5 million for her husband Jay-Z’s 43rd birthday.

The visually distinct luxury watch features an astounding 1,282 emerald-cut and baguette diamonds, weighing about 118 carats total. Several emerald-cut diamonds set in the bracelet are each larger than 3 carats a piece.

Adding more drama and bling to the striking aesthetic is an 18-karat white gold dial and self-winding hands.

Hublot painstakingly and precisely created the Big Bang luxury timepiece. The company spent over a year sourcing the diamonds and another 14 months assembling the watch, enlisting the help of five diamond setters and 12 diamond cutters who reportedly worked full-time on it for over seven months.

Every single diamond on the Big Bang was also hand-cut by a single New York City jeweler, so as to ensure they had the exact same cut signatures.

At first glance, you immediately notice something unique about the Patek Philippe Ref. 1518 in stainless steel. It’s not an unusual color or covered in diamonds – it’s made of stainless steel.

That’s a highly unusual choice of material in this class of ultra luxury watches, although it doesn’t take anything away from its elegance. On the contrary, it makes the Ref. 1518 even more rare and desirable.

The rare luxury timepiece also features a beautiful moon phase aperture and a tachymeter scale on the dial. It sold to one extremely lucky bidder in November 2016 for just over $11 million at an auction in Geneva, Switzerland.

When world-famous movie star Paul Newman’s custom Rolex Daytona sold for over $15 million at a New York watch auction in 2017, it was historic. At the time, the iconic luxury watch was the most expensive wristwatch ever sold at auction.

A dream come true for those into watch collecting, the famous Rolex Daytona was a personal gift from Newman’s wife, Joanne, because he notoriously loved both car racing and watches.

The Rolex watch features a striking black and cream Art Deco dial that’s reminiscent of a race car’s instrument cluster. On the back, it’s engraved with the words, “Drive carefully, Me.”

Collectors from all over the world have long considered Newman’s Rolex Daytona something of a “holy grail,” not just for its luxury craftsmanship or even rarity, but for its significance to Americana and vintage Hollywood.

Throughout the 1980s, it was rare for Newman to be photographed without the Rolex Daytona on his wrist.

If you’ve ever seen an emerald-cut diamond up close, you’ll know how mesmerizing it is. It’s like looking at a hall of mirrors, in a way – all the elongated facets reflect beautifully off one another, making the diamond appear infinitely deep.

Now imagine 260 carats worth of emerald-cut diamonds, some as large as 3 carats a piece, encrusting the bracelet of a luxury watch. You actually don’t have to imagine it, because that’s exactly what the Jacob & Co. “Billionaire” watch is.

It’s a heavy watch, as you might imagine, and it has a skeletonized face that’s somehow both timeless and ultra modern. Inside, a tourbillon mechanical movement requires manual winding and has a 72-hour power reserve.

The Henry Graves Supercomplication was created in 1927 especially for the very wealthy American banker, Henry Graves, Jr. To this day, he is considered one of the pioneers of luxury watch collecting and certainly one of the biggest collectors in the world.

They include a perpetual calendar, sunrise and sunset times, a minute repeater with Westminster chimes, and the pièce de résistance: a celestial chart created based specifically on the stretch of sky directly above Henry Graves, Jr.’s New York City home.

The custom details on this luxury watch lend a truly priceless mystique. Unlike many of the world’s other most expensive watches, the Graves Supercomplication doesn’t belong to a museum.

It was owned by a member of the Qatar Royal Family for many years, and was sold to an undisclosed private bidder for $24 million in 2014. 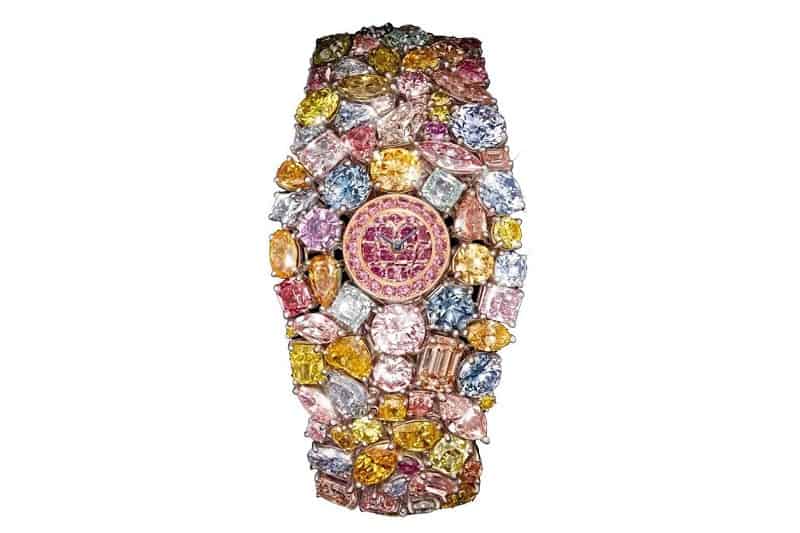 Chopard is synonymous with luxury watches and jewelry, so it’s no surprise it made this list. When it was created in 2000, the Chopard 201 Carat was the most expensive watch ever created.

The watch’s appropriate, if not original, name comes from the fact that it’s comprised of a staggering 874 individual diamonds weighing 201 carats.

That includes 163 carats of yellow and white gold diamonds cut in pear and round shapes, as well as three massive heart-shaped diamonds: An 11.36-carat flawless D colorless, a 12.79-carat VS2 Fancy Blue, and a 15.37-carat flawless Fancy Pink.

Those three heart-shaped diamonds are arranged like flower petals and cover the watch face. With the press of a specific diamond, a spring-loaded mechanism rotates them out of the way to reveal the dial.

Looking more carefully at the watch “band,” it becomes apparent that all of the diamonds are artfully arranged into daisy-type flower designs, with the yellow and white gold perfectly placed.

Marie-Antoinette’s storied Breguet “Grande Complication” has a hefty price tag, but its history is far more valuable. According to Breguet, a “mysterious admirer” of the French queen commissioned the watch in 1783 with an unlimited budget.

It was a gift for the queen and was ordered with numerous customizations in order to make it as grand as possible. The secret admirer stipulated that gold should be used in place of other metals and that the watch should have as many complications as physically possible.

The Grande Complication was so, well, complicated that it took 44 years to complete. By the time it was finished, Marie-Antoinette and her admirer were both long deceased. Still, the story of this expensive pocket watch doesn’t stop there.

Today, “The Queen,” as the watch is now appropriately called, resides in the LA Mayer Museum of Islamic Art. As the saying goes, however, everything has a price. For $30 million, anyone could own this fascinating piece of history.

The Patek Philippe Grandmaster Chime holds a unique distinction on our list of the world’s most expensive watches: It’s the most expensive watch ever sold. At a 2019 Christie’s charity auction in Geneva, Switzerland, it sold for $31.2 million to an undisclosed bidder.

The luxury watch can display one of two reversible dials, a rose gold-colored one and a black one. The rose-colored dial is inscribed with, “The Only one.” It was designed in 2014 to honor the company’s 175th anniversary and reportedly took over seven years and 100,000 hours of research, development, and production to complete the Grandmaster Chime.

When London-based jeweler Graff Diamonds sets its mind to something, the company does it big. That is certainly the case with “The Fascination,” a three-in-one jewelry masterpiece that includes a watch, bracelet, and ring all in one.

The Fascination features 152.96 total carats in the form of white diamonds, remarkable in and of itself. However, at the watch’s center sits a stunning 38.13-carat D flawless pear-shaped diamond.

It is that diamond that detaches to transform the timepiece into a ring or bracelet. Graff Diamonds also sourced, cut, and polished the center stone itself.

Laurence Graff, Graff Diamonds’ CEO, told Forbes in 2015 that the convertible nature of The Fascination adds “a touch of magic to the jewel.”

Indeed, a $40 million watch that transforms to become not just one but two stunning pieces of jewelry is magical. No matter which way it’s worn, The Fascination is truly bespoke and marvelously architectural.

In the top spot for the most expensive watch ever made is another Graff Diamonds creation. The 110-carat, $55 million “Hallucination” was the brainchild of CEO Laurence Graff himself. He unveiled the Hallucination in 2014 at Switzerland’s Baselworld, one of the world’s premier watch and jewelry shows.

Even more impressive, the Hallucination incorporates diamonds of various fancy shapes such as marquise, round, pear, emerald, heart, and radiant. 110-carat anything would be breathtaking, but the sheer number of diamonds combined with the rainbow of colors and shapes make it an absolute showstopper.

There is a platinum setting holding all those diamonds, although it’s practically invisible, thanks to each diamond being precisely hand-fitted. The time-keeping aspect of this luxury watch is there, of course, but is almost an afterthought.

At the center of the 110 carats’ worth of diamonds sits a teeny, tiny quartz-face clock framed by – surprise – more pink diamonds.

The 12 Best Gold Watches You Can Buy Right Now