Nike vs. Under Armour Shoes – Which Is Better Quality?

There are many reasons to love both Nike and Under Armour shoes, but when it comes to overall quality, who comes out ahead? Here’s what you should keep in mind when deciding which brand deserves your hard-earned dollars. 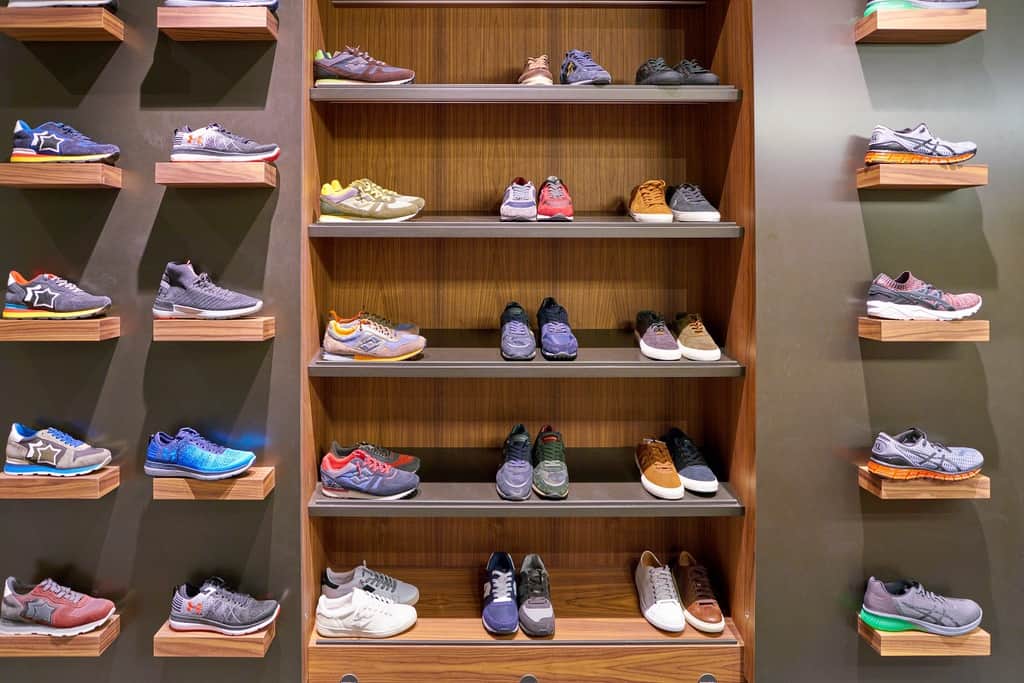 Under Armour burst onto the scene out of Baltimore in the mid-1990s where it quickly became a forerunner in the active wear and casual apparel industries. The brand turned heads thanks to its innovative moisture-thwarting synthetic fabric that prevented athletes from sweating through their clothing.

The company’s initial focus was on apparel, not shoes, and it wasn’t until 2009 that they released their first line of footwear. However, they’ve caught up rapidly despite a short time in the market — partnerships with famous athletes such as NBA player Stephen Curry have certainly helped fuel this momentum.

In recent years, Under Armour has experienced tremendous financial growth. In both 2015 and 2016, the company saw revenue soar more than 25%. It’s no wonder Under Armour is a favorite choice for investors, many of whom predict it will be worth more than ten billion dollars in the future.

For reference, there are few brands worth that much, and if Under Armour were to reach such ranks it would be standing next to the likes of Ford, UPS, and Nestle. 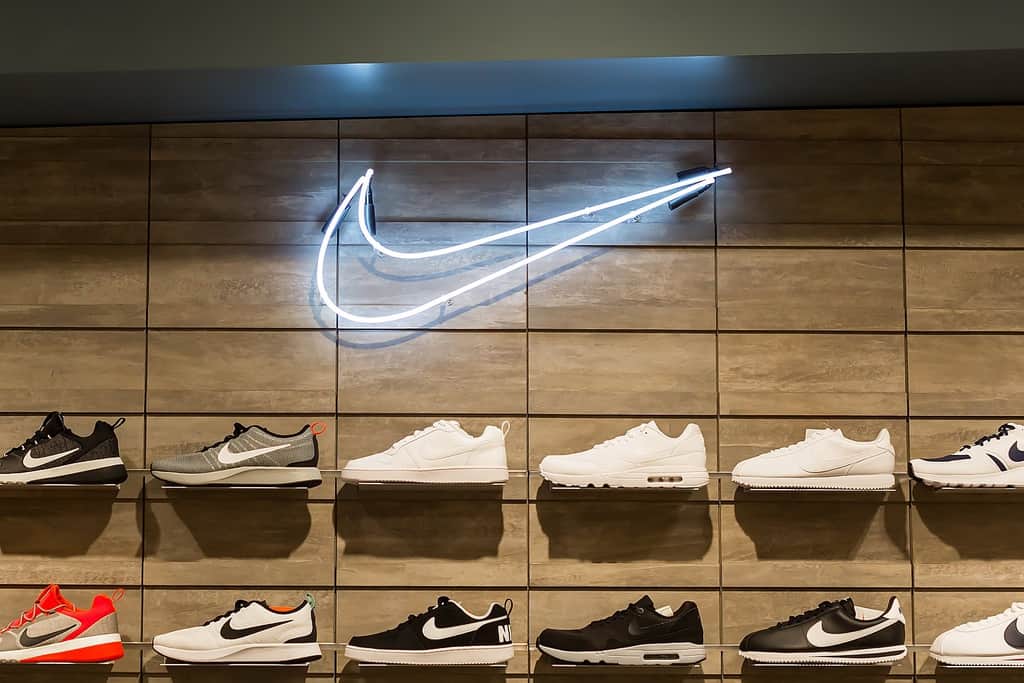 Nike as a brand requires little introduction, and shoes may be the company’s best-known product type of all. This may have a little something to do with the brand’s status as the signature shoe of Michael Jordan.

Now the world’s largest athletic company, Nike has its roots in the 1960s when it was founded by a track athlete and his coach at the University of Oregon.

If there is somebody who knows the importance of running shoes, it’s a track star — so it makes sense that Nike would be early innovators in the realm of athletic footwear.

Nike’s brand value is estimated in the 36-billion-dollar range. As if that number wasn’t impressive enough, Nike also has the kind of worldwide recognition that most companies can only dream of, from its iconic “swoosh” question-mark esque logo, to its “Just Do It” slogan that seems as embedded in mainstream culture was any idiom could be. 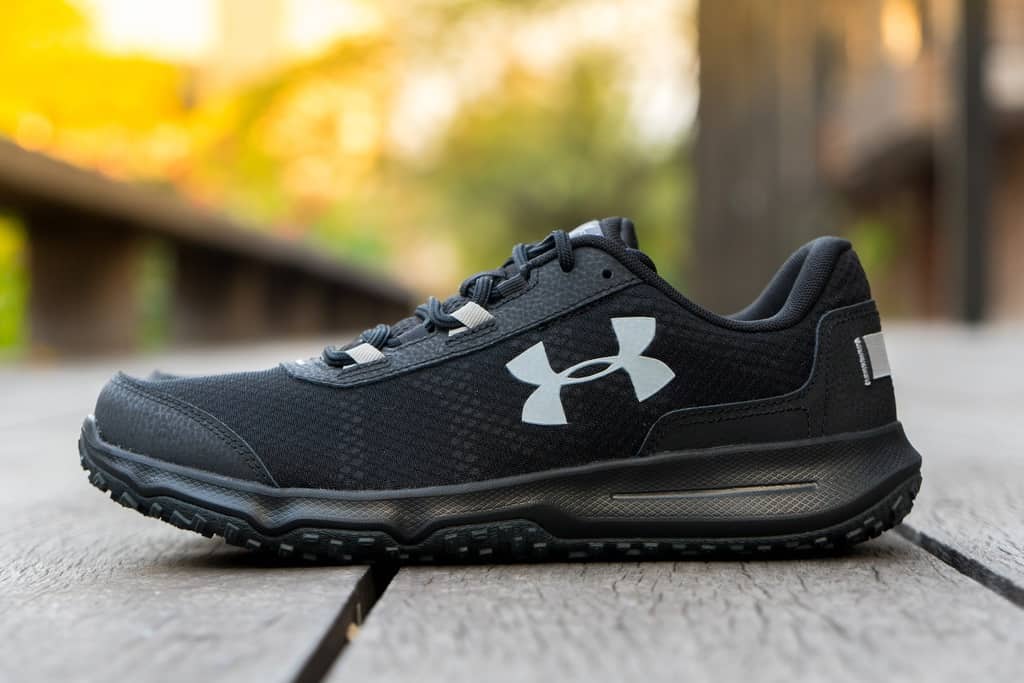 Having released their first shoe line only ten years ago, Under Armour may be a relative newcomer to the shoe world, but that doesn’t mean that they haven’t already turned heads.

In fact, shoes are currently the fastest-growing part of Under Armour’s product line. This is especially true in terms of their basketball shoes and running shoes line.

Part of the reason why Under Armour has been so popular is because of its compression technology. It is well-known for its “speedform” shoe that features no in-sole and very little stitching, with the result being an incredibly lightweight shoe that feels like an extension of the wearer’s body.

Each shoe also features a “heel cup” for additional support that is particularly appreciated by runners. Interestingly, the company’s speedform shoes are made in clothing factories (not shoe factories), which is a very different approach than that of their counterparts. 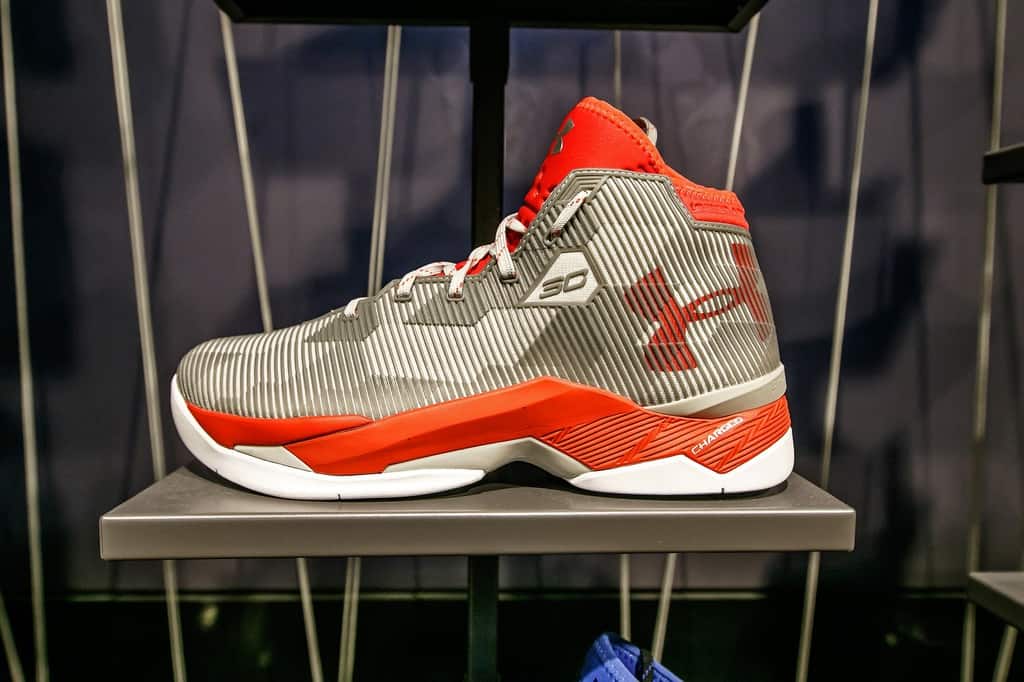 Under Armour is also well-known for their technology-enabled footwear, also affectionately known as “smart shoes”, such as the HOVR Phantom and HOVR Sonic. These shoes include such features as a gyroscope, a tool that can be used to measure peak velocity. Other smart features include an accelerometer and bluetooth capabilities.

It’s worth noting that with the pairs retailing between $110 and $150, Under Armour shoes are also priced competitively, especially considering their added features. 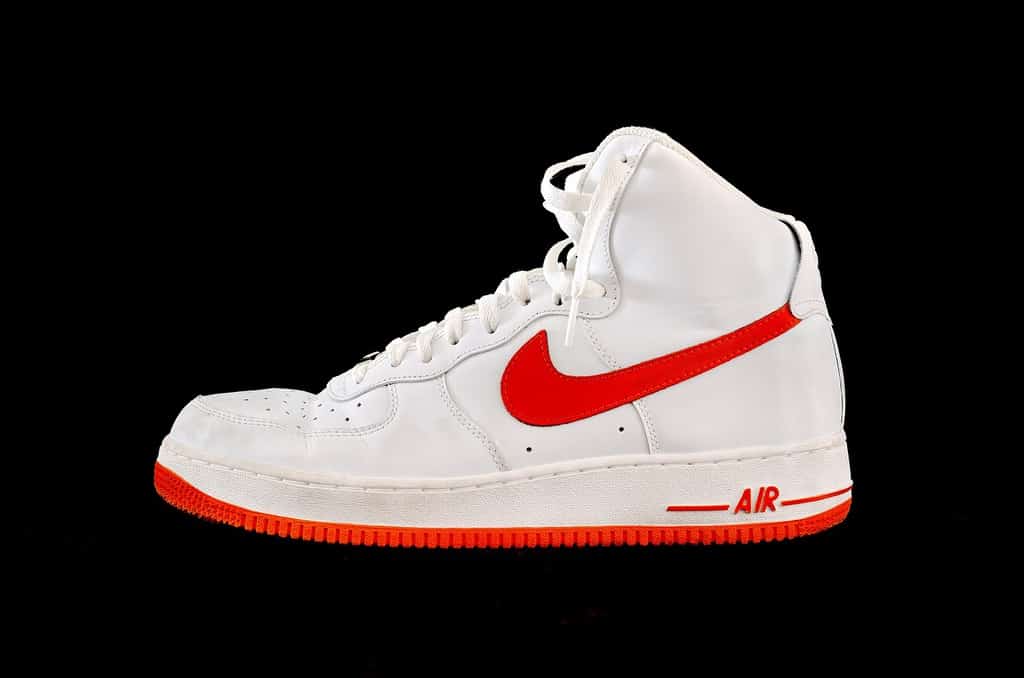 It’s hard to know where to begin when describing the shoes that Nike carries. Their product line ranges from various sports shoes (such as soccer, basketball, or running), to children’s shoes, to the extremely popular streetwear lines.

Nike is no stranger to patented shoe technology, and has in fact been cranking out innovations for decades. In the late 1970s, the company released their air-sole cushioning system, which they called Nike Air.

Nike Air was conceived of by lab scientists who used computers to map out an outsole mold, a revolutionary approach for its time.

Other Nike-specific shoe technology includes Nike Shox (designed after race cars and intended for runners), Nike Free (meant to support runners’ legs and ankles, and designed after bare human feet), and Flywire (a design that is meant to better distribute the wearer’s weight). As far as smart shoes go, Nike offers Nike+, which has the ability to incorporate biofeedback into the shoe wearer’s experience. 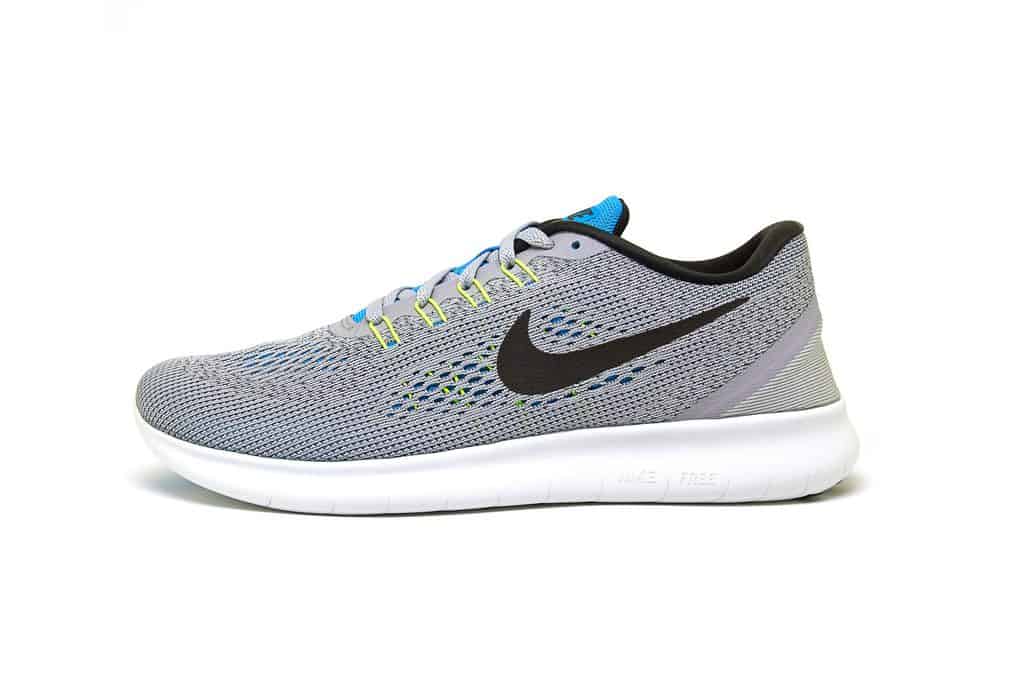 Nike shoes generally range in price from about $90 to upwards of $200. 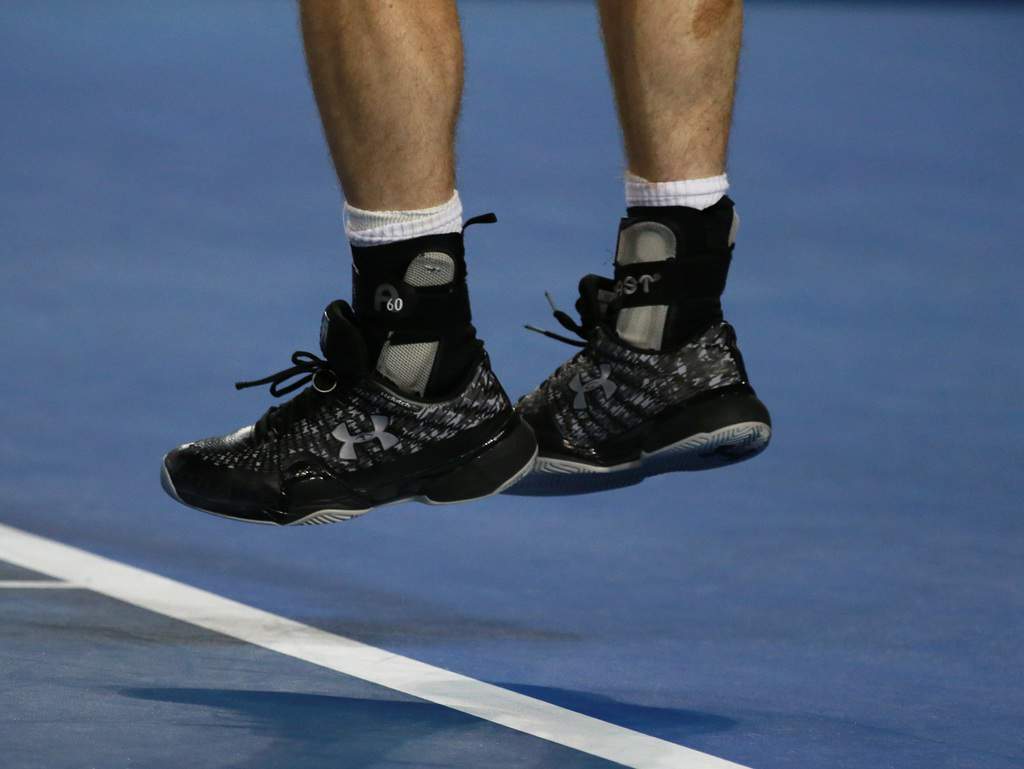 The reputation of Under Armour, including Under Armour shoes, is generally good. Fans applaud the brand for their innovation and stylish designs.

The company proudly backs its shoes with what they call a Universal Guarantee of Performance (UGOP) — a promise that any item bearing the Under Armour logo can be trusted to provide a quality performance.

Buyers generally seem to agree with this sentiment. Under Armour’s shoe shoe model, the HOVR, has especially been given rave reviews for the way that it easily allows users to map out their runs and receive personalized insights about their running style, such as the width of their pace. 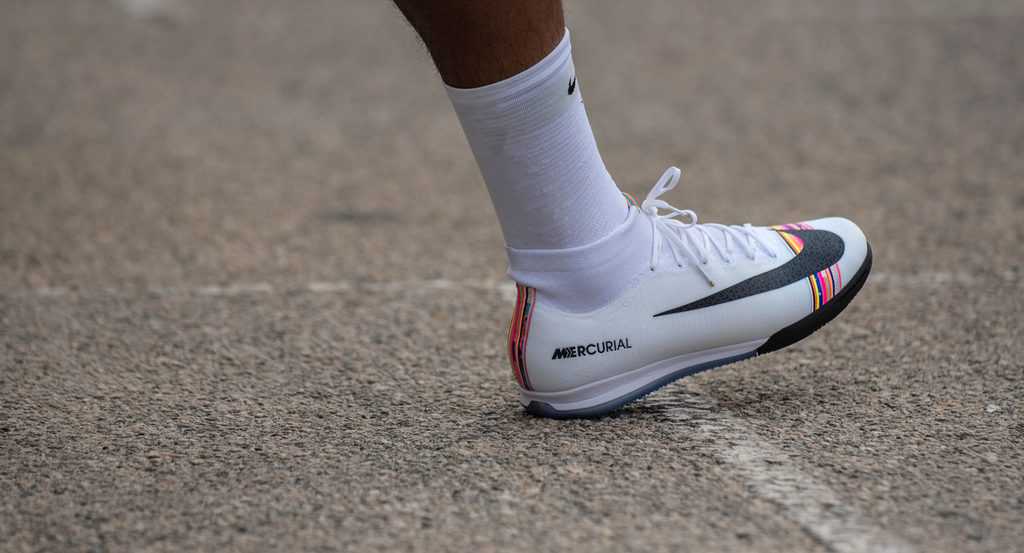 Nike didn’t make it to the top by sheer luck. Over the years, the company has built up quite a reputation for itself, with millions of loyal customers lauding the athletic giants for the great quality of their shoes. But is this warranted?

The truth is that Nike’s reputation did not appear out of thin air. The brand won over their customer’s respect over the years by producing one quality shoe after another, and listening to their customer’s needs and wants.

The company chooses their shoe’s materials very carefully and tests out their models extensively before even releasing them to the market. Customer trust has also been built through athlete association (aside from the aforementioned basketball stars, numerous Olympic athletes have won medals in Nike),

Both Under Armour and Nike start their shoe offerings a men’s size 7 (US). Most Under Armour shoes go up to size 15 or 16. The largest Nike size available is 18, although most models level off at 15 or 16 as well. Under Armour shoes are said to fit pretty true-to-size, while Nike is somewhat notorious for their shoes being a little on the wide side.

Of course, not all sizes are created equally, and will largely depend on the type of materials that the shoe is made out of. Both Nike and Under Armour use high-quality leather in most of their shoe models, but there are some differences in the other types of materials used.

Most Nike shoe models are made out of a lightweight, breathable combination of plastic, ethylene-vinyl acetate (EVA foam) and mesh fabric. Nike claims to make its shoes out of up to 75% of recycled materials.

Under Armour is lauded for their innovative fabric technologies in their apparel, but does the same ring true for their footwear? The claims that the brand makes on its website about its shoe material certainly does sound impressive.

The shoes include a flexible mesh on its body, a comfy shock-absorbant material on the body, and something called “UA speedform” in the shoe’s heel, which is designed to mold to an individual’s specific foot shape to offer support.

Nike or Under Armour? Which is Better Overall?

It may seem like it’s “just a pair of shoes”, but the reality is that choosing a home for your feet is an important decision.

Athletes in particular need shoes that offer adequate support around the ankles, which can only be provided by a high-quality material. Sports shoes must also provide a strong outsole grip so that athletes can put them through vigorous activity without hesitation.

Even for those who are purely looking to purchase shoes as a fashion accessory, a new pair of shoes really is a financial investment that we want to last for a long time to come.

The truth is that, while no shoe purchase is virtually risk-free, you can’t really go wrong with either Nike or Under Armour.

We know that can easily sound like a cop-out, but bear with us. Both companies have great footwear available out there on the market. It really depends on individual tastes and needs.

If you are a casual customer who wants to learn more about their running habits, Under Armour may be the perfect choice for you. Check out their collection on UnderArmour.com.

If you are looking for a classic and reliable choice, then Nike is surely a purchase that you are not likely to regret. After all, in the game of footwear shopping, there are no steps backwards — only forwards. Check out their latest designs on Nike.com.