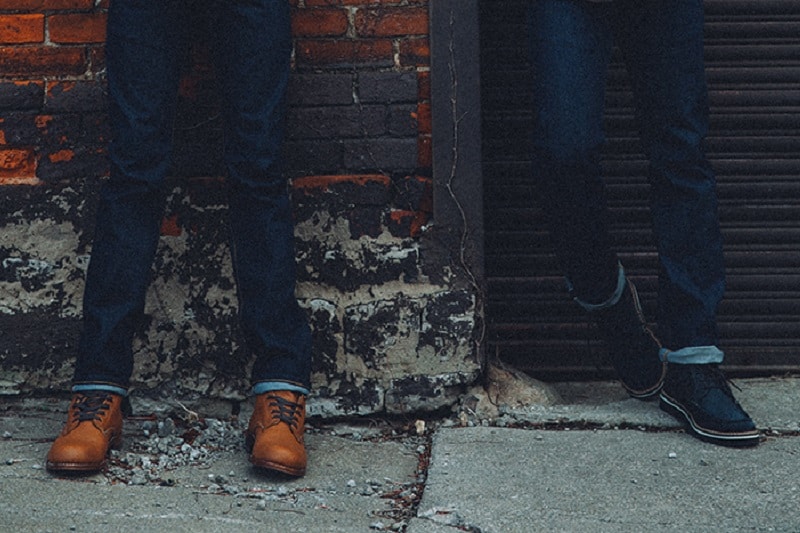 Wolverine 1000 Mile vs. Red Wing Heritage: Everything You Need To Know

When it comes to choosing the right footwear brand for your specific wants and needs, there are countless options to choose from – especially in this day and age where you can search the internet for whatever you want and have a list of contenders pop up in 0.5 seconds.

However, you shouldn’t just go with the first brand you find online, as there are many trusted footwear brands that have satisfied customers from around the world for centuries with their tried-and-true boot and shoe designs. Wolverine and Red Wing are two of the most trusted American-made footwear companies across the globe, as their iconic leather work boots and other forms of footwear have been around for over 100 years.

If you’re on the hunt for a pair of work boots that will last a lifetime or just a pair of casual boots or shoes that are durable, comfortable, and stylish, then you really can’t go wrong with either of these brands. However, there are a few subtle differences between the two footwear brands, which we’ve outlined below. 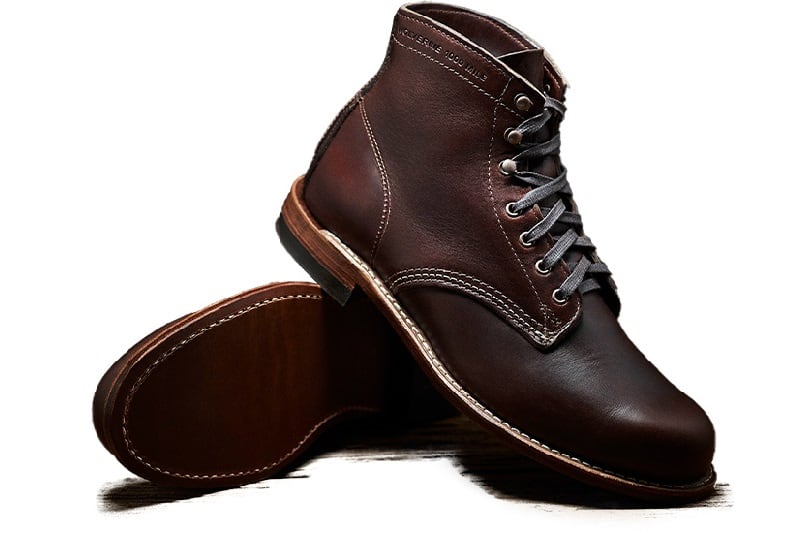 Wolverine is an American footwear brand that was established in the late 1800s and is known for its iconic leather boots; particularly, their Wolverine 1000 Mile Boot, which was first introduced in 1914. Over one hundred years later, the details of the tried-and-true leather boot remain the same; however, the brand now offers five different options when it comes to choosing the right type of sole for your footwear needs.

There’s the Original, which features a “classic leather outsole with a Vibram® heel” –  the exact same sole that was introduced in 1914, the Evans, which has a “Vibram® rubber tap sole and heel for added traction and durability,” the Axel, which features a “rugged Vibram® lug outsole for ultimate grip and versatility,” the Wedge, which is perfect for all-day wear and features “Vibram’s® classic, rubber wedge for all-day comfort and maximum miles,” and the most casual of the bunch, the Sneaker, which has a “lightweight and flexible Vibram® sneaker cupsole made to move with you.” 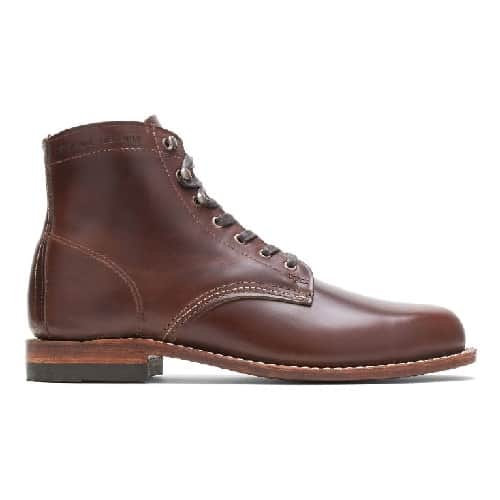 America’s original work boot is still going strong. Recreated from our original 1914 patterns, the 1000 Mile boot is the perfect marriage of timeless craftsmanship and style.

Each pair is handcrafted with premium materials for unbeatable quality. So your 1000 Mile boots will age beautifully and get better the farther you go.

What Is Red Wing Heritage?

Red Wing is another tried-and-trusted American footwear company that specializes in leather boots and was founded in 1905 in Red Wing, Minnesota. Not only does Red Wing make some of the best functional and practical work boots around, but in the 1970s, people started stylizing Red Wing boots outside of the workplace, giving their wardrobe a fashionable, Americana upgrade with the brand’s iconic leather boots. This led to the creation of Red Wing Heritage, a line of fashionable boots that’s proven extremely popular with footwear aficionados.

The Red Wing Heritage line consists of all different types of leather shoes ranging from Oxfords and moccasins to desert boots and Chelsea boots, which are all “built with traditional construction and timeless design.” Red Wing Heritage shoes also feature “premium leather, durable stitching, and resoleable welts [to] create American-made footwear that lasts for years.” 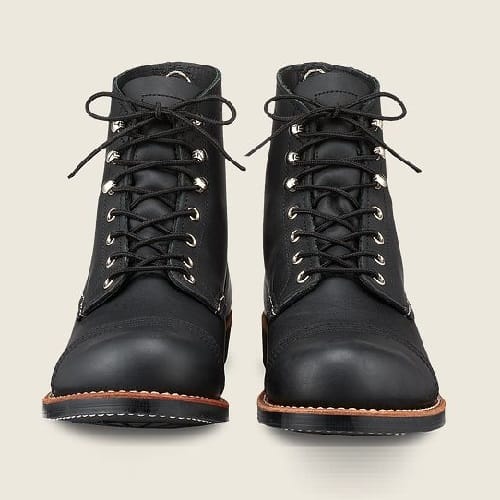 See more about - Blundstone 500 vs 550: Everything You Need To Know

What Are the Main Differences Between Wolverine 1000 Mile and Red Wing Heritage? 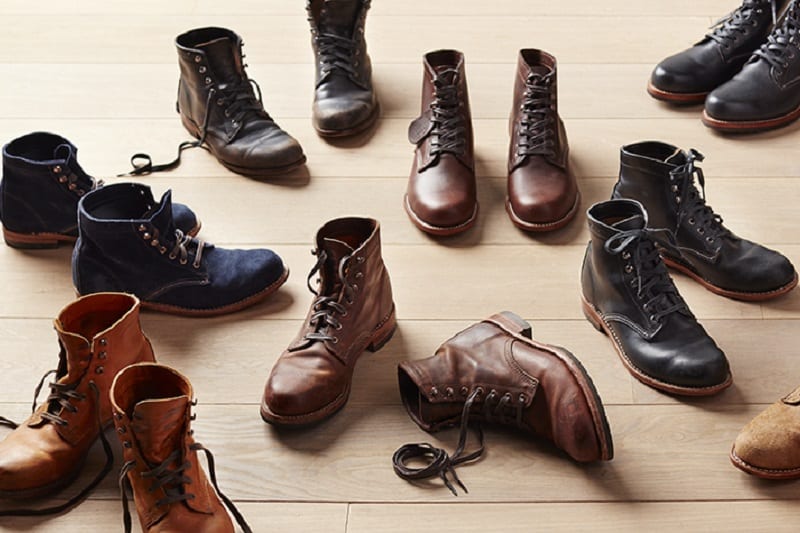 Wolverine and Red Wing are both American-made footwear brands with a long history in the shoe industry; however, there are a few minor differences between the two brands that may factor into your decision to go with either one or the other when looking for a pair of work boots or other footwear.

If you’re specifically looking for a pair of work boots that are functional, durable, and protective, you really can’t go wrong with either brand; it pretty much comes down to your own preference. Red Wing shoes tend to err on the more casual side of footwear (which we’ll get to shortly), so if you do opt for a pair of Red Wing work boots, make sure you look at their Safety Toe collection, which is “crafted with durable stitching and designed for all-day wear” and features “protective reinforcement engineered in the toe prevents injury to the foot from falling objects or compression.”  Wolverine also offers a Safety Toe collection, and both brands run in the same price range, so again, it comes down to personal preference.

Both brands offer footwear collections that can be styled for everyday wear, so again, it really comes down to the tiny details you’re looking for in a casual boot, sneaker, Oxford, etc…

Wolverine 1000 Mile is one of the most popular kinds of boots around, and like we previously mentioned, there are a ton of options when it comes to choosing the right sole for your footwear needs, be it a shoe that’s durable or one that is more lightweight and will move with you. Additionally, there are many unique colors and finishes, and each shoe is handcrafted in the United States using leather from Horween Leather Company in Chicago. Wolverine also offers waterproof boots, sneakers, athletic shoes, and more, so it’s basically a guarantee that you’ll find something that’ll work for your style.

Red Wing Heritage is another popular shoe line when it comes to boots and other casual footwear, and is often considered the more casual option when compared to Wolverine. The brand is best known for its 6-inch Classic Moc, which was first constructed by the brand in 1952.

Not only is it suitable for everyday wear for those who work on farms, factories, or a job where you’re on your feet all day, the Classic Moc can be styled outside the workplace, too. Red Wing Heritage is also known for its Iron Ranger Boot which was originally built for miners in the 1930s and features a signature leather toe cap.

How To Style Wolverine 1000 Mile Boots 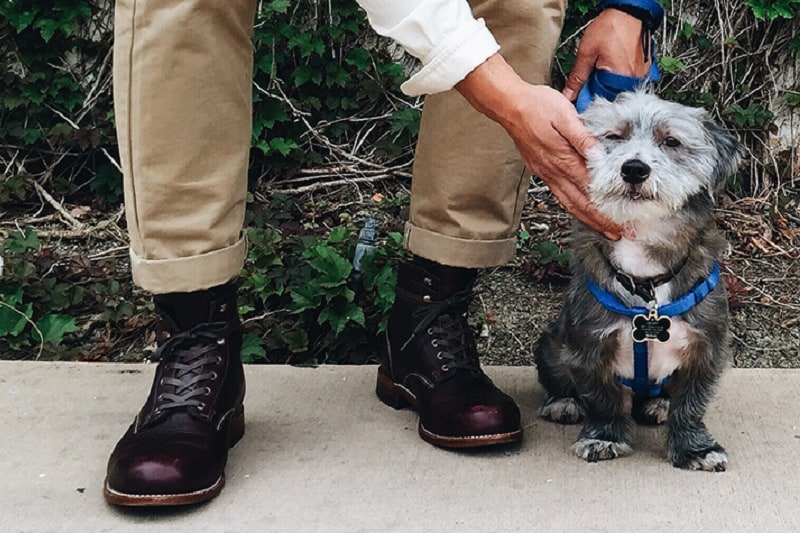 While Wolverine 1000 Mile boots are undoubtedly high-end, stylish, and durable, you shouldn’t wear them to any formal or black tie events – grab a pair of Oxfords or brogues for any event that requires a suit or tux. Wolverine 1000 Mile boots are best suited for upscale casual wear if you’re planning on styling them outside the workplace, in which case, “styling” them is a matter of putting them on with whatever you wear on the job.

For a casual yet rugged and effortlessly cool vibe, wear the Wolverine 1000 Mile boots with skinny or slim-fit denim of your preferred wash, depending on the color of your boots, and make sure you cuff your jeans up so they hit just above the shoe; typically, about six inches from your heel. Any casual top like a henley, plain white t-shirt, or crewneck sweater will pair perfectly with your boots and denim, and if the weather permits, you can totally throw on a leather jacket, bomber jacket, or oversized denim jacket to complete your look. 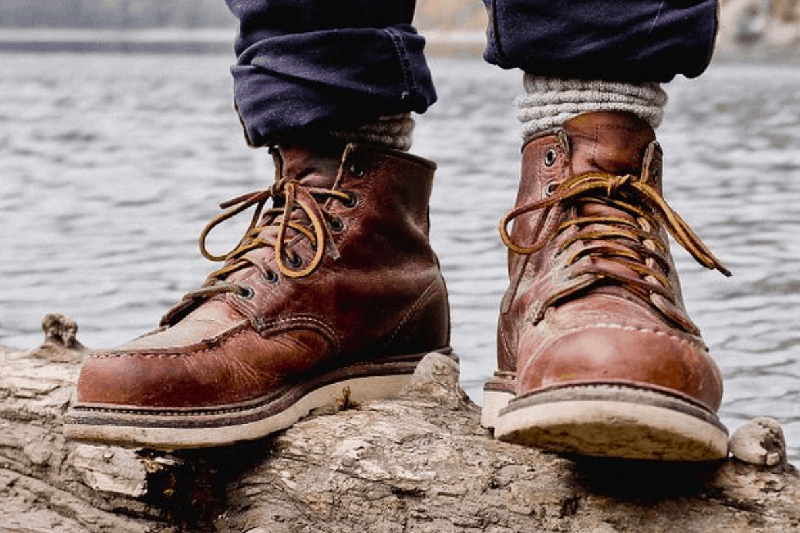 As previously mentioned, Red Wing Heritage boots tend to run a bit more on the casual side in comparison to Wolverine 1000 Mile boots, so keep that in mind when styling these boots outside the workplace. No matter what style of boot you go for, if the boot is either a six-inch boot or eight-inch boot, you definitely need to cuff your pants so they hit just above the shoe, because what’s the point of buying boots if you’re just going to cover most of them up with your pants?

Show ‘em off with your preferred wash and fit of denim or even a pair of chinos, and keep it casual on top with a hoodie, long sleeve shirt, or any top made of cotton or a comfortable, breathable material. Again, these types of shoes aren’t really suited for formal events, so skip them when going to a wedding, a business conference, or to a job interview.