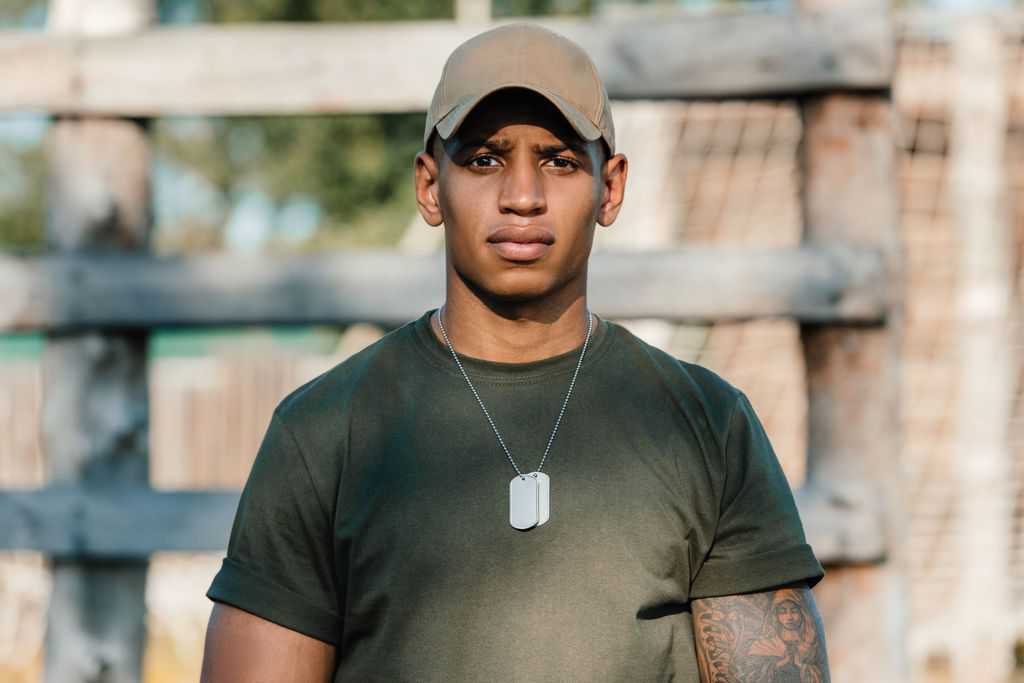 Do existing tattoos disqualify you from military service? Can you get tattoos if you join the United States Army? Which tattoos are banned and which are acceptable?

Since 2015, the United States Army has relaxed its policy regarding tattoos thanks to officials who felt the strict rules and regulations were costing them quality recruits. While the brave men and women who have enlisted are able to sport a variety of ink on their bodies, rules and restrictions must be taken into account for soldiers considering new ink, as well as for anyone with existing tattoos looking to enlist.

This simple guide will outline changes to the US Army’s tattoo policy compared with other military branches, examine current standards regarding subjects and placement of tattoos, and explore popular tattoo trends among the men and women who serve our country. 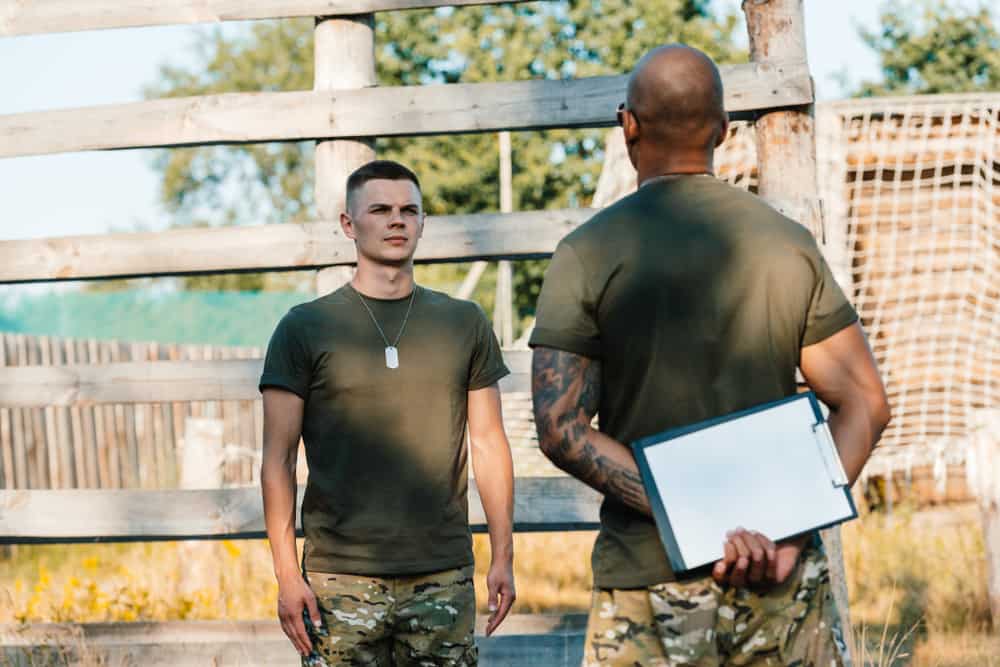 In 2015 the US Army revised its existing policy regarding the number of tattoos a soldier can have on their arms and legs. Prior to this update in regulations soldiers were limited to four tattoos below the knee or elbow, with none exceeding the size of the palm of the hand.

While the Armed Forces still prioritize higher standards of grooming and cleanliness, officials also realized the need to adapt to the changing world and evolving attitudes regarding tattoos. With nearly half of all millennials getting tattooed, something had to change.

Under new guidelines enacted during Iraq and Afghan combat in 2015, the seemingly arbitrary number of four tattoos on the arms and legs was replaced with a more detail oriented approach. Under the new policy, the number of tattoos isn’t specified; instead limits are focused on where the ink can be located and its subject matter.

The following graphic shows where tattoos are and are not accepted in the US Army in 2020. 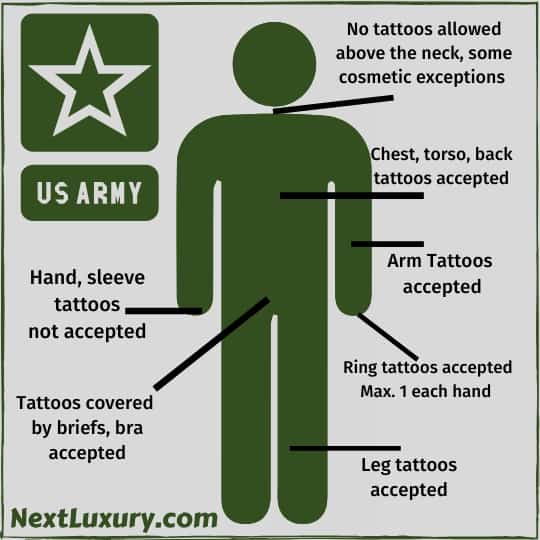 On the visible part of the arm (i.e. forearms) tattoos must be one inch below the elbow and tattoos cannot extend onto the wrist or hands. For upper arm pieces, tattoos must start two inches above the elbow.

Tattoos on the legs must be either two inches above or two inches below the knee, leaving the areas of skin on the knee untouched. As long as these placement rules are followed no number limit for tattoos is specified.

Tattoos on the back and torso are less restricted regarding size and placement as long as they don’t pass the shirt collar and extend onto the neck.

While Army officials are attempting to adapt in the face of a changing society, the military’s emphasis on maintaining a clean and disciplined appearance means certain placements and subjects are still prohibited.

Tattoos on the neck, face and hands are still banned, with the exception being one ring finger tattoo that cannot exceed the space where an actual wedding band may sit.

The content of tattoos can also be factors concerning discipline or ineligibility for enlistment. Most notable on the prohibited list are tattoos that display content considered extremist or are “affiliated with, depicting, or symbolizing extremist philosophies, organizations, or activities.”

Designs that are deemed racist, sexist or overtly obscene also remain prohibited and offending tattoos can be cause for disqualification or discipline. The Army’s core tenets regarding cohesion and unity leave no space for content or attitudes that undermine solidarity. 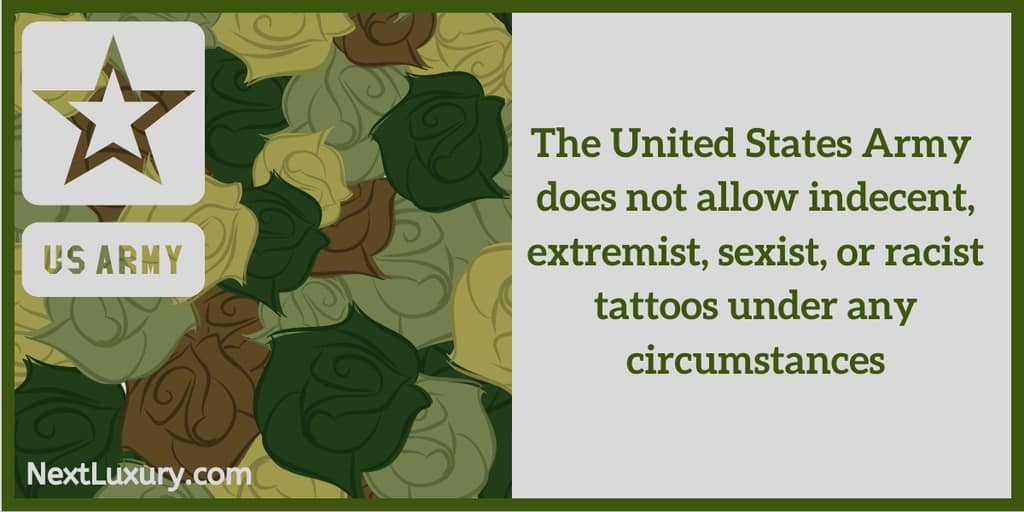 For the most part the regulations concerning tattoos are fairly similar from one military branch to another, with some minor differences.

Most notably, the US Navy has a more relaxed approach regarding size and placement of tattoos on the arms and legs. In fact, thanks to recent changes, sailors with full sleeve ink are now eligible for placement at Recruiting Training Command and Recruitment Command positions. 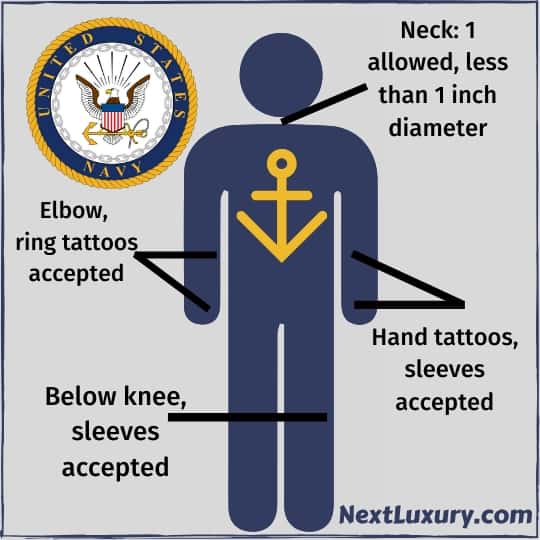 The Navy also now permits sailors one neck tattoo, as long as it doesn’t exceed one inch in diameter, and hand tattoos remain on the table. Given the historical significance of tattoos in the navy this relaxed stance isn’t surprising.

Conversely, the US Marine Corps is more strict than Army policy. Marines are only allowed four visible tattoos outside of their physical training uniform of crew neck t-shirt and shorts, none of which can exceed the size of the palm of the hand. Tattoos on the back and torso that are obscured by this uniform are unrestricted regarding size, placement and number. 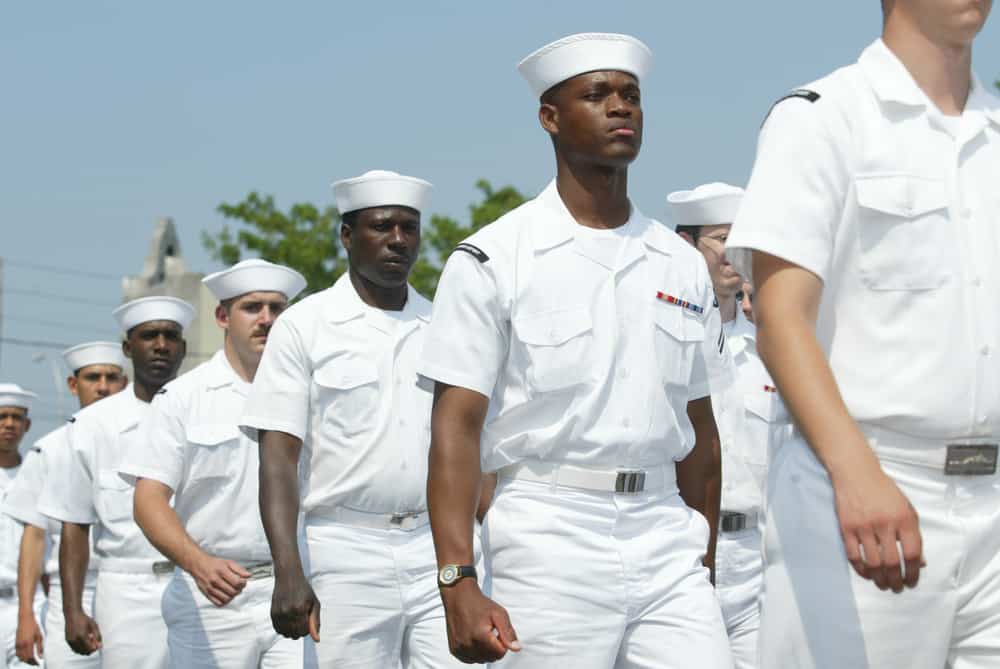 With a better understanding of what is and is not acceptable under the current Army tattoo policy, we can now look at more popular styles and trends in military tattoo design.

Many of the brave men and women that serve in our nation’s armed forces choose designs highlighting their patriotism such as American flags and bald eagles. Other popular designs are more specific to a soldier’s service and many choose to get dog tags or the insignia of their military branch inked on their bodies. Some soldiers even get different missions and operations that they participated in commemorated with tattoos.

The weapons of war are definitive elements in every soldier’s life. These tools of the trade are also often incorporated into military tattoos.

The following galleries depict some of the popular styles of military tattoo: 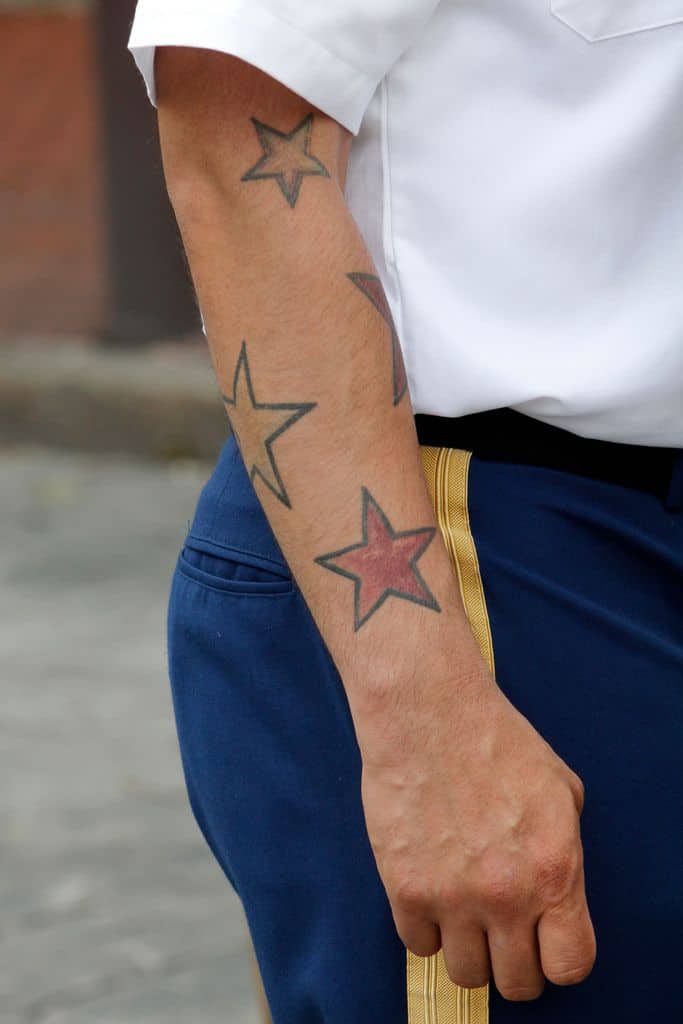 The acknowledgement by top Army officials regarding outdated tattoo policy is a good sign when it comes to remaining viable and maintaining acceptable recruitment numbers. Just like any organization, the United States Army must constantly adapt to changing attitudes. Sometimes this means reexamining different rules and regulations in light of wider society’s current trends.

As tattoos continue to gain popularity among the youth forming the pool from which the armed forces draws recruits, it is likely Army policy may need further updates. Given the growing popularity of face and neck tattoos there may a time in the future when officials have to further relax guidelines in order to find recruits, although for anyone interested in enlisting it is best to get tattoos conforming to current official guidelines.