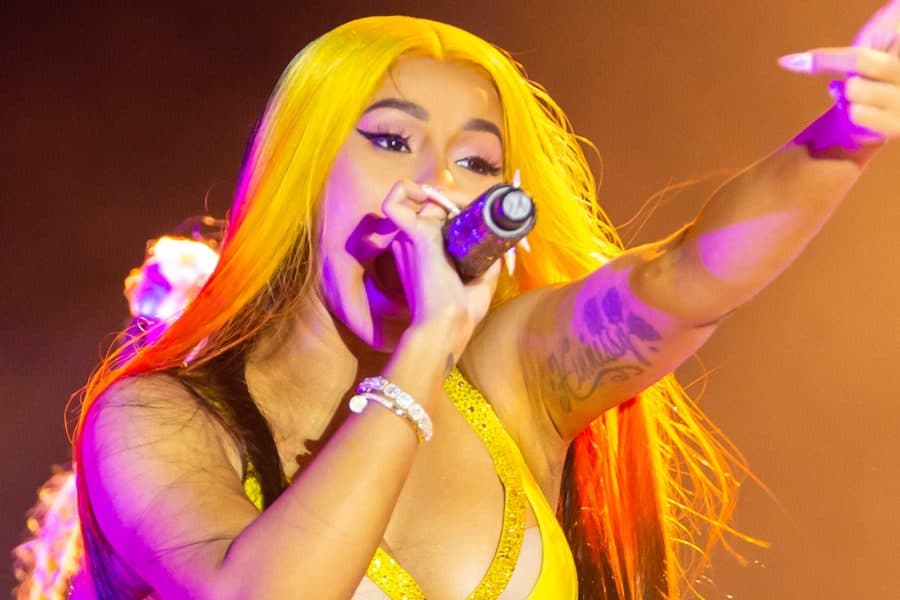 Rapper Cardi B is known for her no holds barred delivery and commitment to authenticity. Check out some of her most prominent tattoo and the reasons behind them. 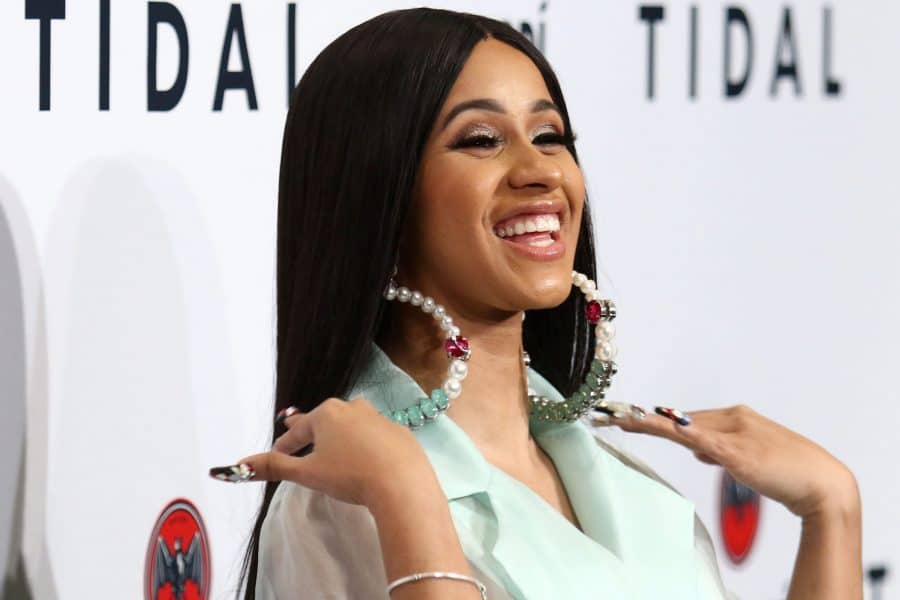 These days, with the opportunity for instantaneous communication around the globe thanks to the internet, a regular person can become a true overnight sensation, working a regular job one day and becoming viral sensations the next. Cardi B is the perfect example of this modern phenomenon, going from fan to famous in the blink of an eye.

Cardi B has sky-rocketed to the forefront of the hip hop industry after she gained attention for several online videos in 2015. Since then, she has released numerous hit singles on the Billboard and Itunes chart and amassing more than 8 million dollars thanks to her savvy business decisions, social media popularity, work ethic, and constant hustle.

Known equally for her aggressive flow as for her bombastic style, Cardi B tattoos have become a hot topic of conversation for her devoted fans. Check out Cardi’s ink and examine the meaning behind these unique tattoos.

Cardi’s giant tattoo is by far her most elaborate piece, featuring a range of colorful flowers flowing down her left side from the back or her ribs, down past her butt and to the back of her thigh.

It’s a sensational tattoo design – inked by Californian tattoo artist Jamie Schene – utilizing colored flowers, including classic designs such as lilies, magnolias and peonies. One of two massive Cardi B tattoos the new ink uses fully saturated, vivid colors. The variations in orange and red ink in particular give it a great pop.

Cardi’s other massive tattoo is located on the rapper’s right side. Starting above her waist and extending all the way past her thigh, it ends just before the knee.

Once again, Cardi has remained tight lipped about the meaning behind this piece, but the peacock is a perfect representation of Cardi’s over the top style and love of bold colors.

Cardi has a new tattoo in black script of her husband Offset’s name. The Migos rapper’s stage name appears on the back of her left thigh, just below the flower piece on the hamstring part of the leg.

She showed off a photo of the new tattoo with customary flair on Instagram. The leg tattoo is just one of many Cardi B tattoos featuring the names of ex-partners.

Located on her right wrist and completed in a cursive black ink script, Cardi has the word “Belkis” tattooed. While she has never spoken directly to the meaning of the tattoo, most fans and media speculate that it is a play on her own first name Belcalis. 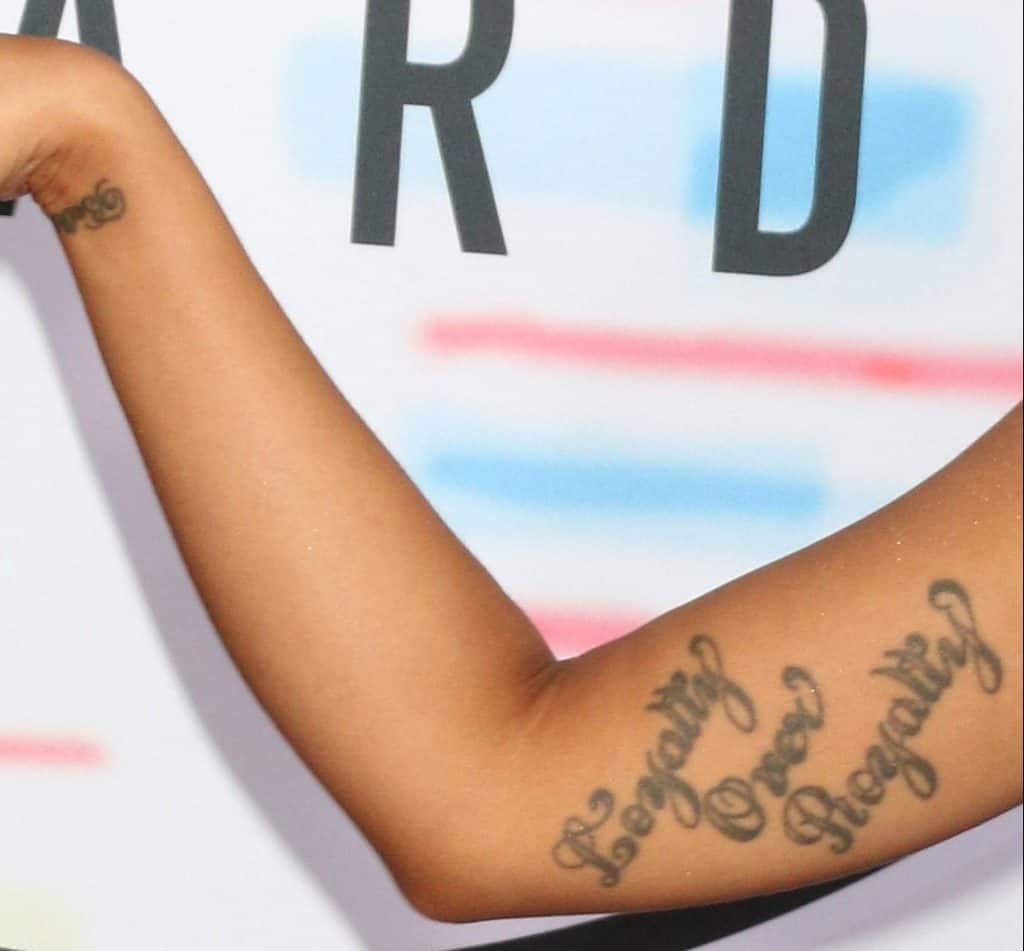 Another wrist tattoo, this one is dedicated to her ex-boyfriend Tommy Geez. Applied in red ink and using an ornate cursive script, Cardi has not mentioned any intent to remove or cover the piece, despite the couples’ split in 2016 after Geez was arrested and convicted on felony weapons charges.

I Love You Hand Symbol and Stars

This is a distinctive tattoo located on Cardi’s neck, behind her right ear. Some argue that this tattoo means “I love you”, since that hand gesture is used in American Sign Language in the same way.

Others point to Cardi’s checkered past and affiliation with notorious gang, the Bloods. She has admitted that she was a member of the Bloods as early as 16 years old and this same hand gesture is used by the gang. 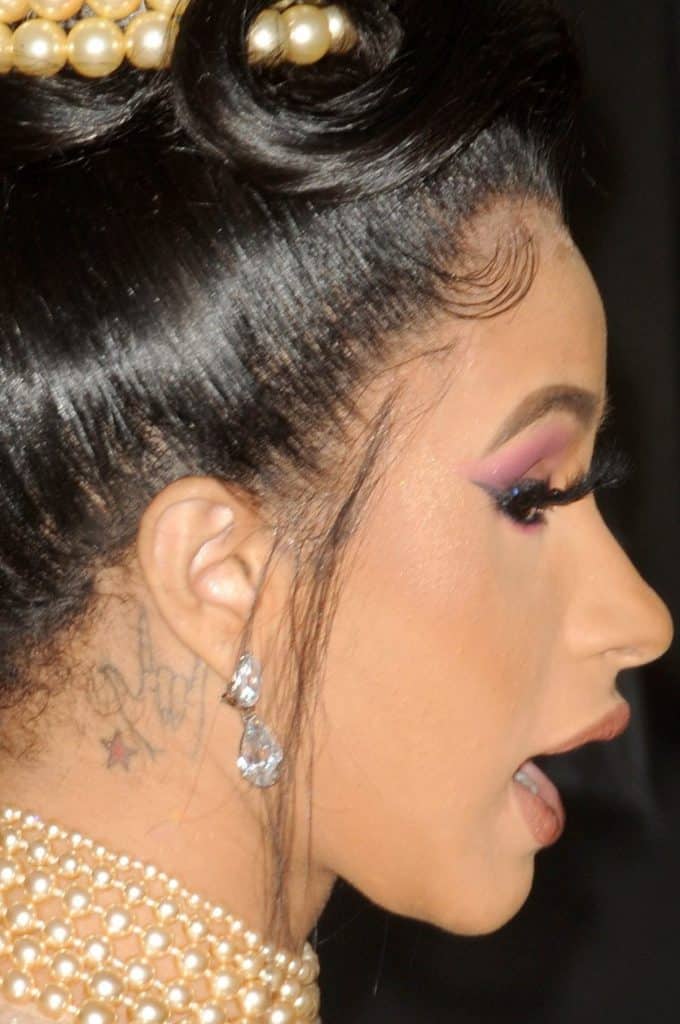 Located on her right bicep, this caption piece is also applied in black ink and uses an ornate and stylized cursive script. Despite having never discussed the meaning of this piece in interviews, Twitter, or Instagram, the significance behind the short caption is obvious.

Not only does this motto state her priorities in life, the concept of loyalty to your friends and your crew is a powerful element in street life, where Cardi spent her formative years.

This tattoo is a departure from the script heavy designs that make up most of Cardi’s other tattoos. Located on her left hip, Cardi has a medium sized cheetah, sitting upright and facing forward. Applied in black and gray ink and taking a realistic approach, Cardi has never spoken directly about the meaning behind this piece.

Perhaps her most mysterious tattoo, Cardi has the name Samuel scrawled across the nape of her neck in red ink using elaborate cursive script. Like her other tattoos, Cardi has never spoken directly about the significance of this piece, but this one has even her most diehard fans stumped. Could it be a former lover? A lost relative? We may never know.

This left bicep tattoo uses a stylized cursive script, applied in clean black ink. The tattoo is in tribute to the rapper‘s sister Hennessy.

Cardi uses tattoos to express herself as well as memorials to the people important in her life. From clean, black script to bold colors, Cardi B’s tattoos perfectly sum up the artist’s style and sensibilities.

Her biggest tattoo issue doesn’t stem from her own ink. In 2019 it was reported that she is facing a plausible claim of using a man’s likeness without consent despite Cardi B’s motion to have the claim from Kevin Brophy Junior thrown out.

The Judge in the case ruled the plaintiff’s likeness, tied to the allegedly copyrightable photograph of a tiger snake tattoo used on the cover of a Cardi mixtape, was enough to oppose Cardi B’s lawyers motion to dismiss and move Brophy Jnr’s claim forward.

The $5 million lawsuit is similar to that lodged against the producers of film the Hangover II for illegally using Mike Tyson’s Face Tattoo for one character’s face tattoo in the movie.