There’s no denying the fact that the Harry Potter book series is one of the most popular in the world, and the content found in those works is rife with inspiration for tattoos.

Originally thought of as a children’s tale, the story of Harry Potter by JK Rowling includes elements that speak to nearly everyone, and the Dementors of Azkaban represent one of the darkest and most mysterious aspects of the series.

Dementors are cloaked wraithlike creatures that guard the wizard prison of Azkaban. They aren’t human, but they have a distinctly human shape despite their obvious magical quality. They’re so horrible they suck all the hope and happiness from you and fill you with despair and hopelessness.

They were introduced in the third book, when they swooped down on Hogwarts Express in search of the escaped wizard Sirius Black. Hogwarts Express is the train that Harry Potter and other young wizards take to reach the Hogwarts School of Witchcraft and Wizardry.

The terrifying creatures have no facial features beyond their black mouths, through which they can administer their most notorious punishment: the Dementor’s Kiss. While that sounds innocuous enough, it results in the victim losing their soul.

Dementor tattoo designs are common among men who enjoyed the Harry Potter series not only because they represent an unknown fear that even the protagonist of the story himself could barely overcome, but also because their imagery is stoic and gaunt.

The creatures appear to be under the control of the good wizards, considering they guard the prison in the wizarding world, but they are much more in league with the Dark Lord Voldemort, the main antagonist in the Harry Potter universe.

That ambiguity speaks to many who feel the Dementors are more than mere magical creatures, but that they actually have consciousness and free will.

The decision to get a dementor tattoo speaks to a desire to understand and acknowledge the dark side of life as well as the unknown that hides behind the veil of existence.

Since dementors are creatures from the dark side, a dementor tattoo in black ink seems logical. But it can be done in color as well,  as you will see in some of the tattoo ideas below. 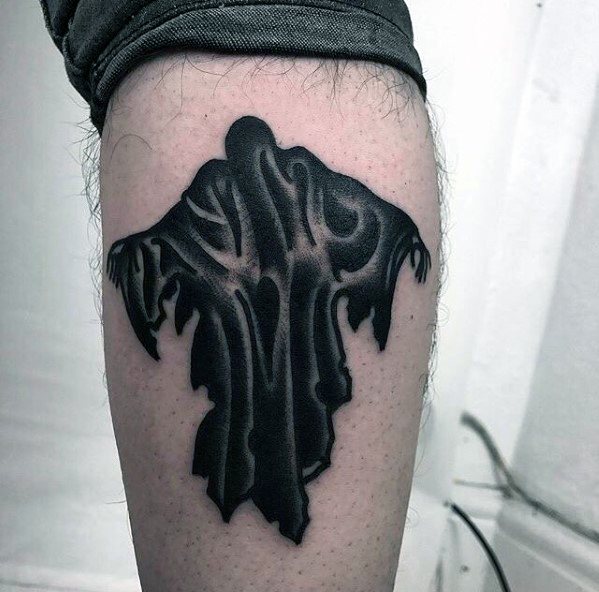 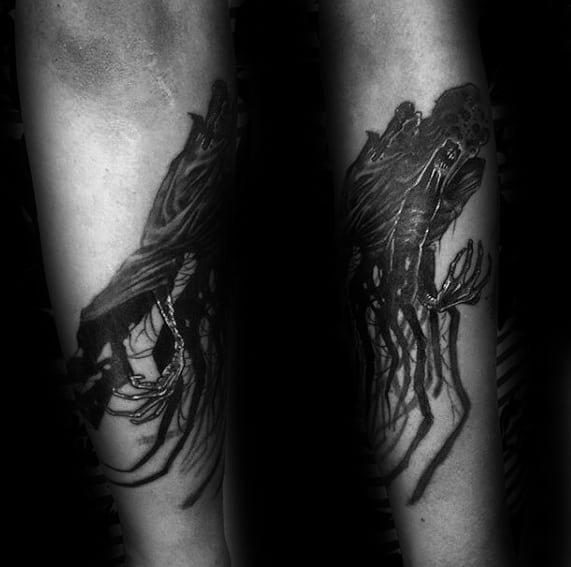 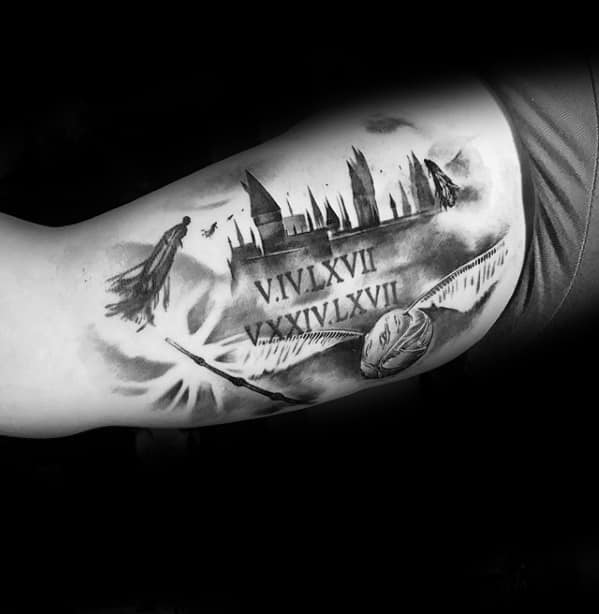 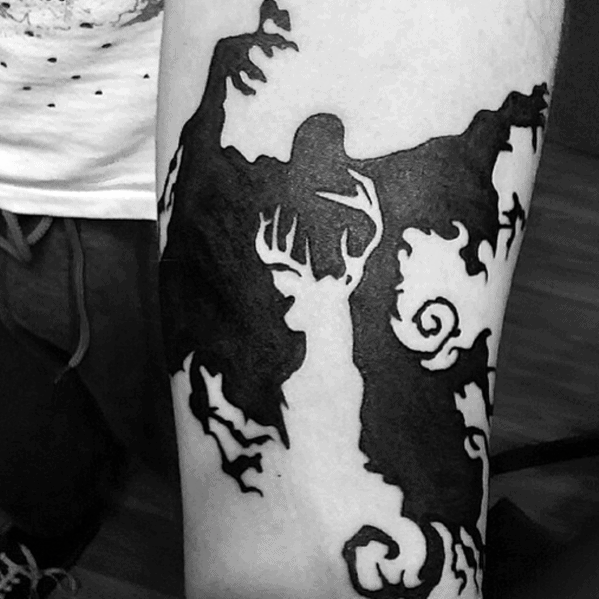 “Expecto patronum!” This is the Patronus charm that the wizard in this tattoo design must have cast as a defense against a dementor. It conjures a wizard’s dazzling spirit guardian, which channels all the caster’s positive emotions and drives a dementor away. 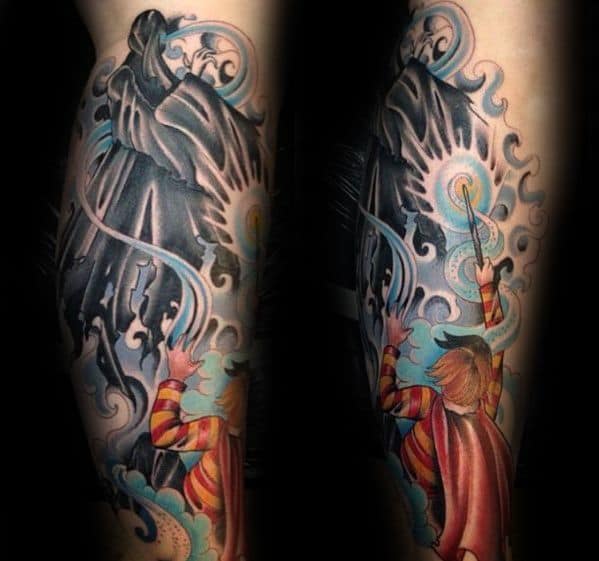 Here’s another dementor tattoo in black ink that covers the inner forearm. On the inner wrist is the word “Always” in script style, a reference to the promise of Harry Potter’s deceased parents that they would always be with him until the end. 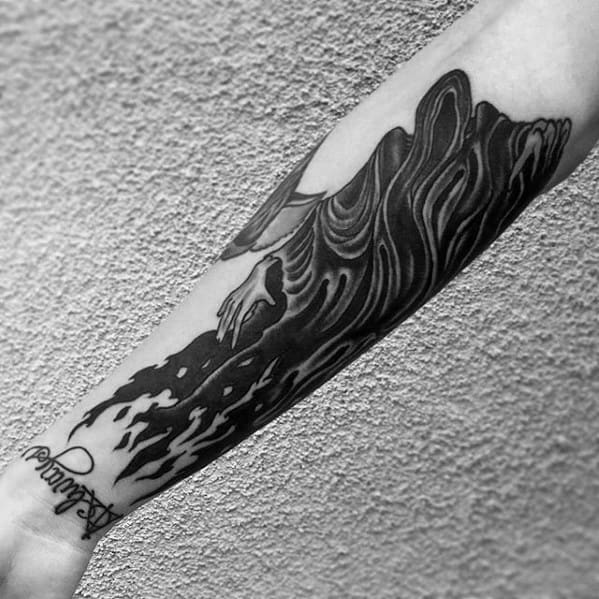 A tattoo artist’s interpretation of a dementor shows a faceless creature with a skeletal body. In the background is the Deathly Hallows symbol, which represents the resurrection stone, cloak of invisibility, and the elder wand. 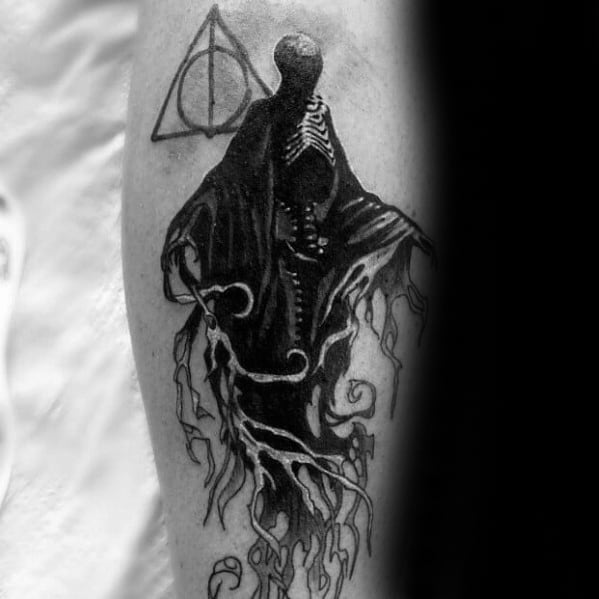 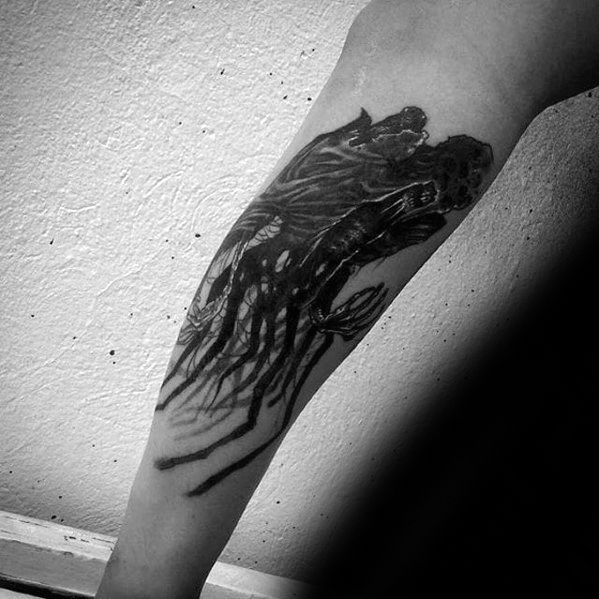 This tattoo design in black and gray shows a large sign of the Deathly Hallows in the sky, dementors flying over the magical castle that houses the Hogwarts School, and what appears to be the dark mark without the snake, a symbol of the Dark Lord and his Death Eaters. 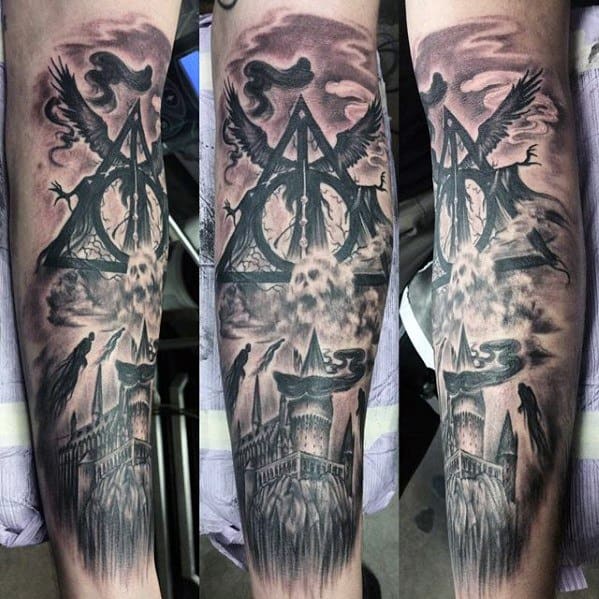 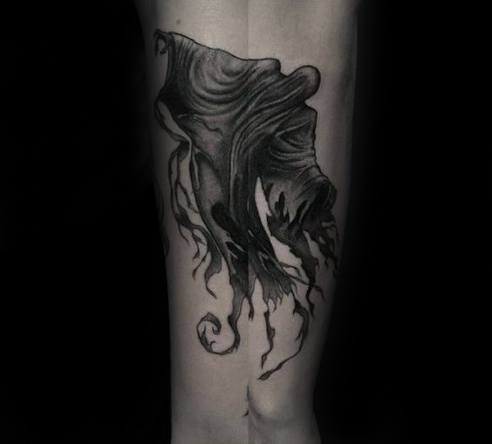 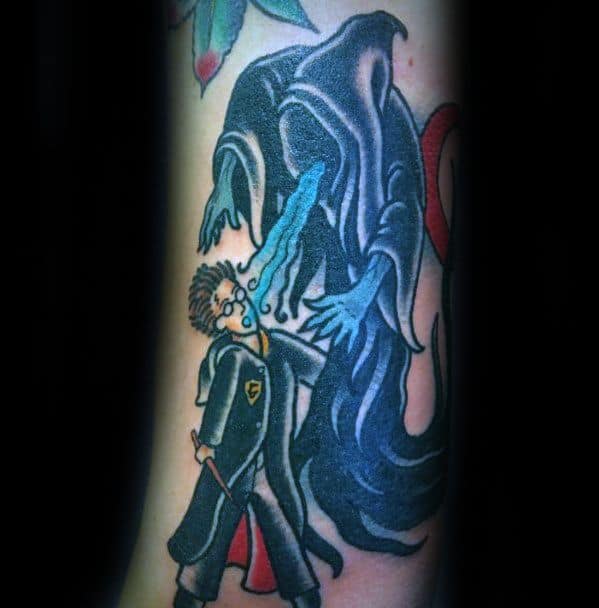 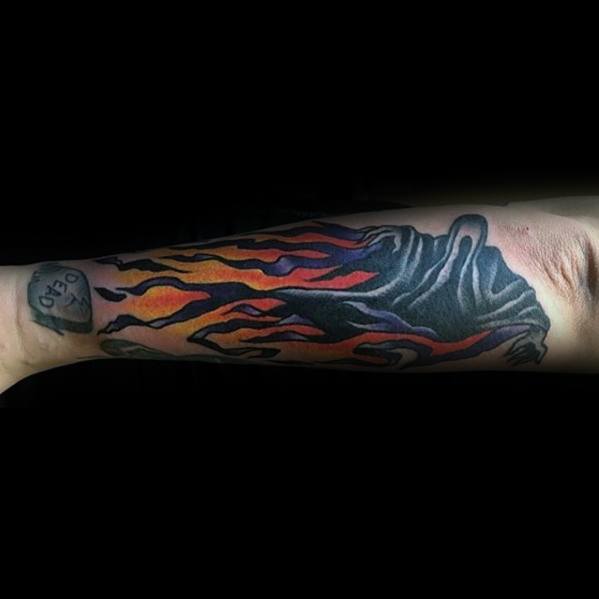 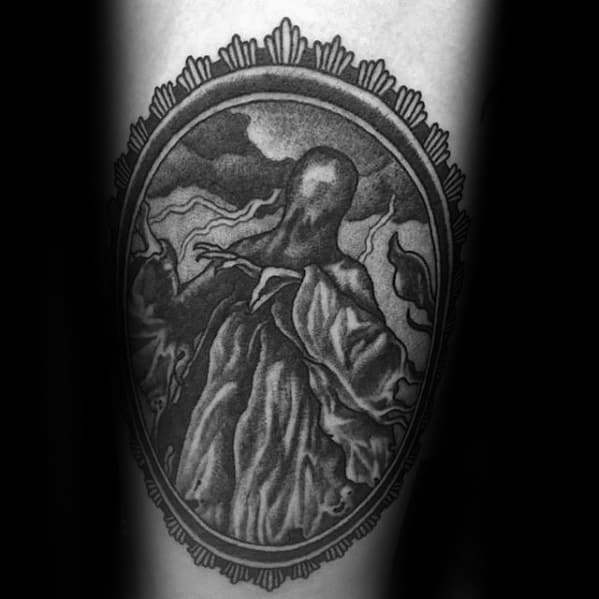 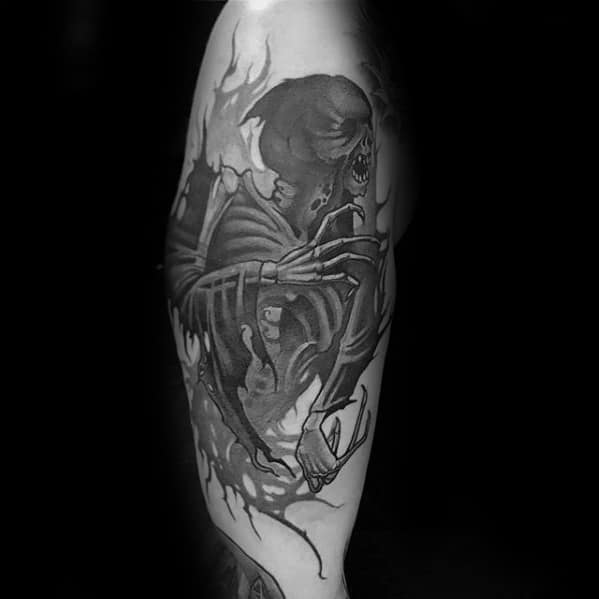 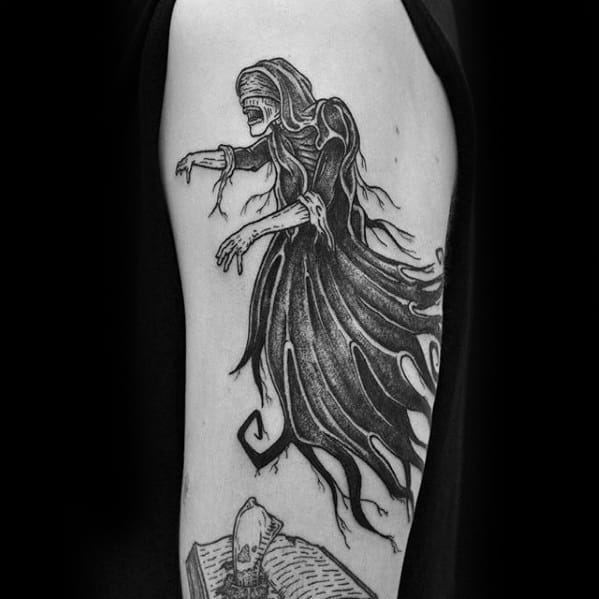 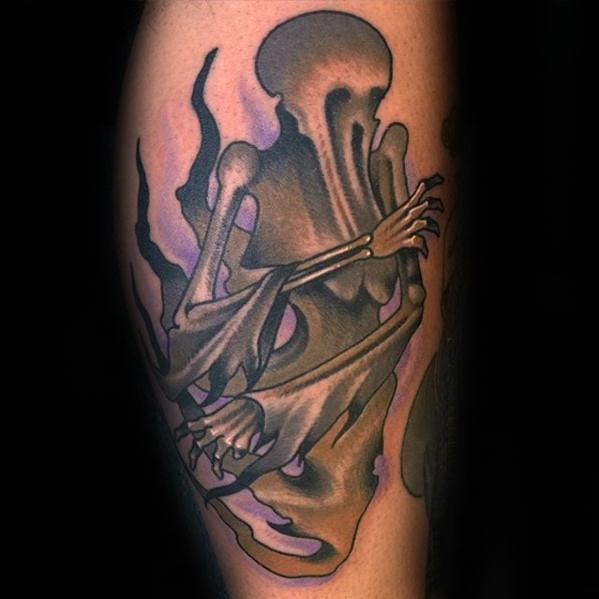 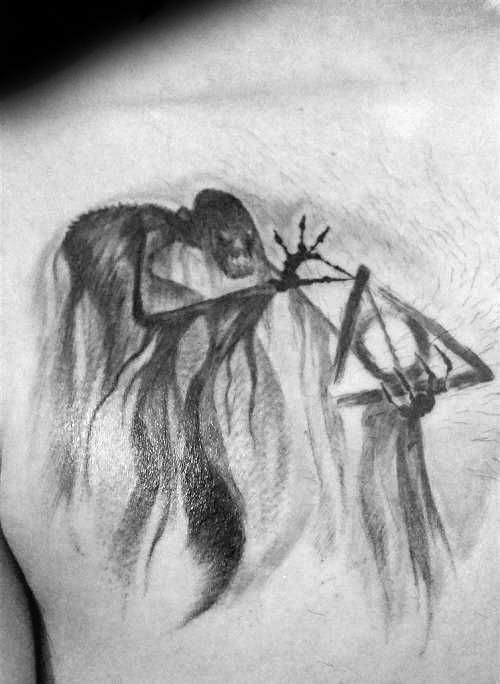 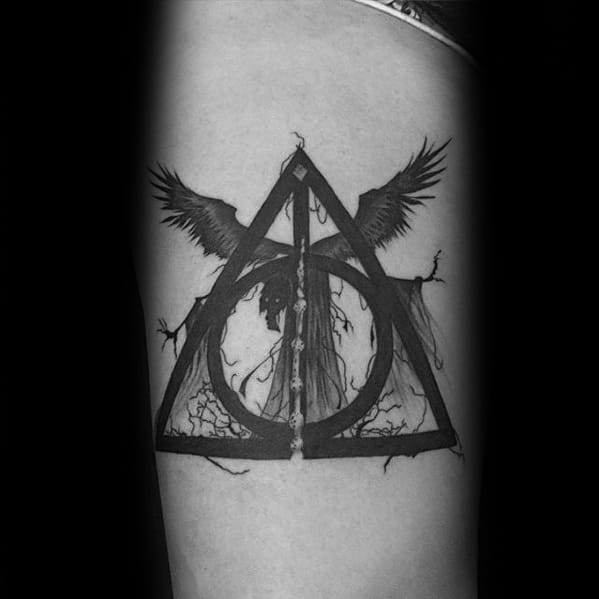 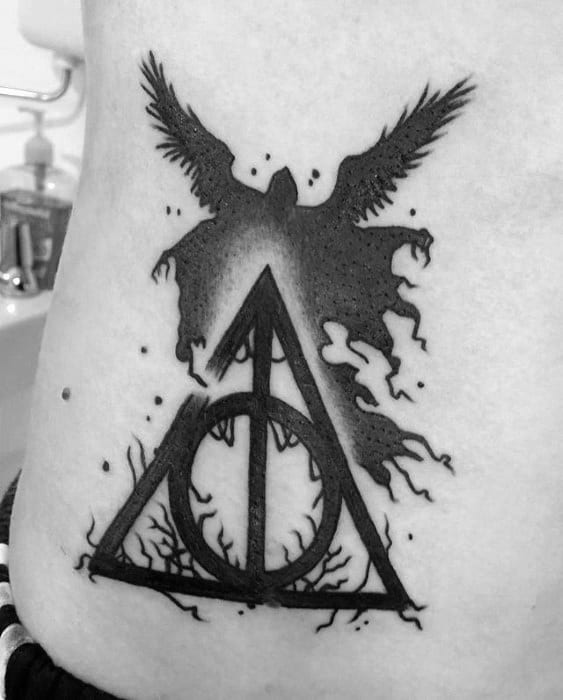 This Harry Potter fan chose a colorful tattoo design of Buckbeak, a magical creature known as a hippogriff. The Harry Potter universe is full of magic and fantastic beasts, including the hippogriff.

In the third book, Harry Potter and his friend Hermione saved Buckbeak from execution and Sirius Black from the Dementor’s Kiss. 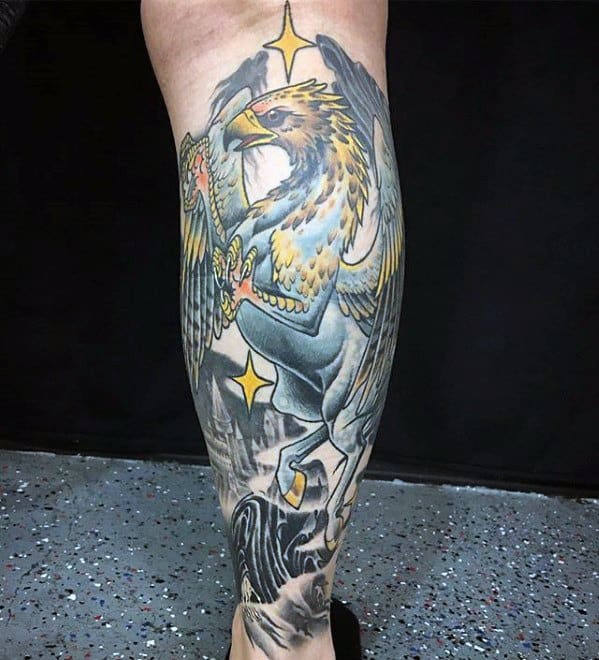 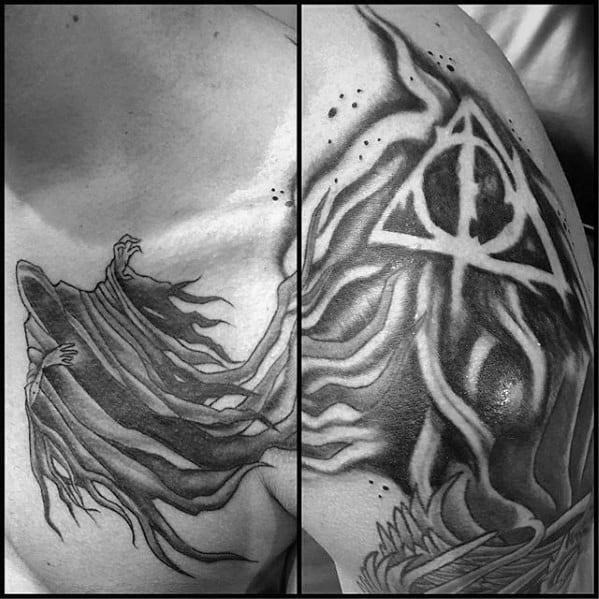 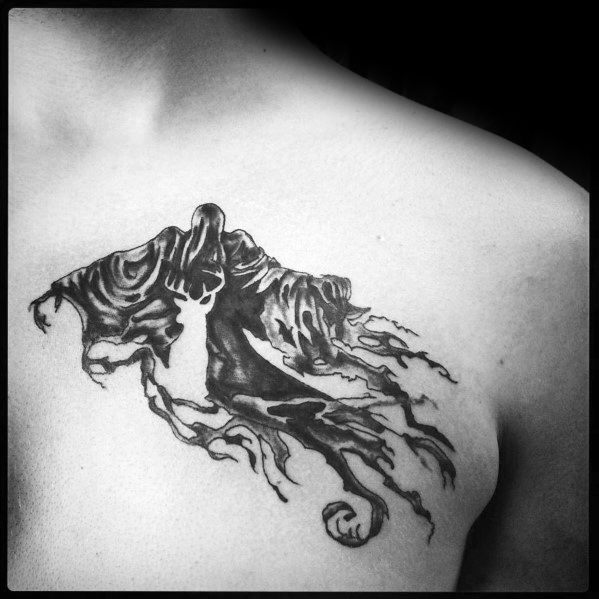 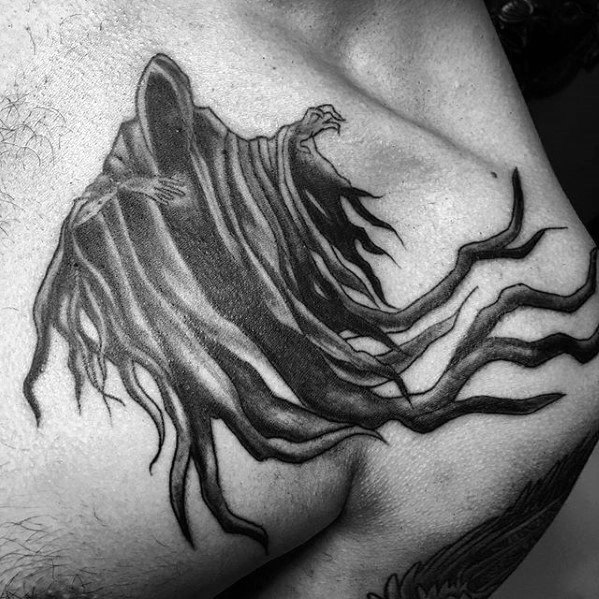 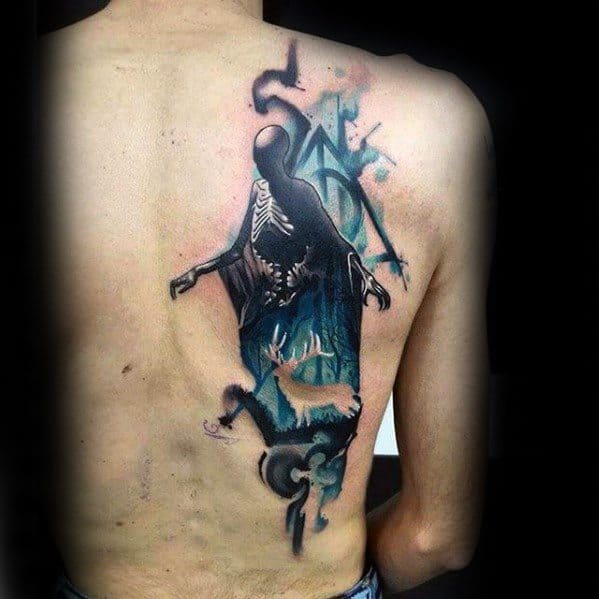 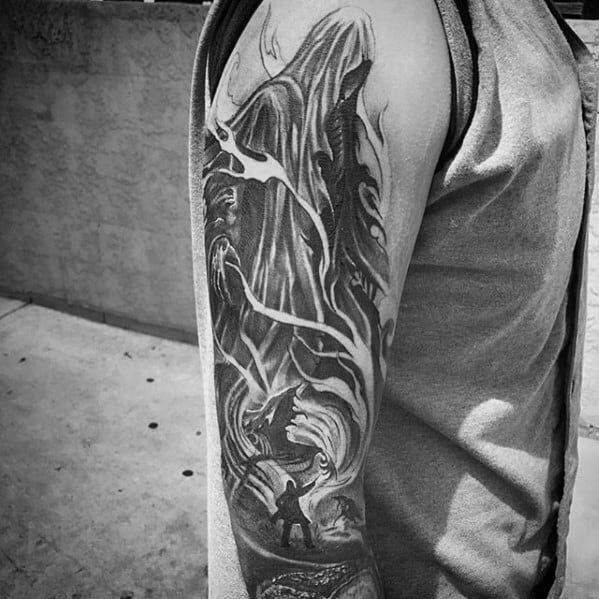 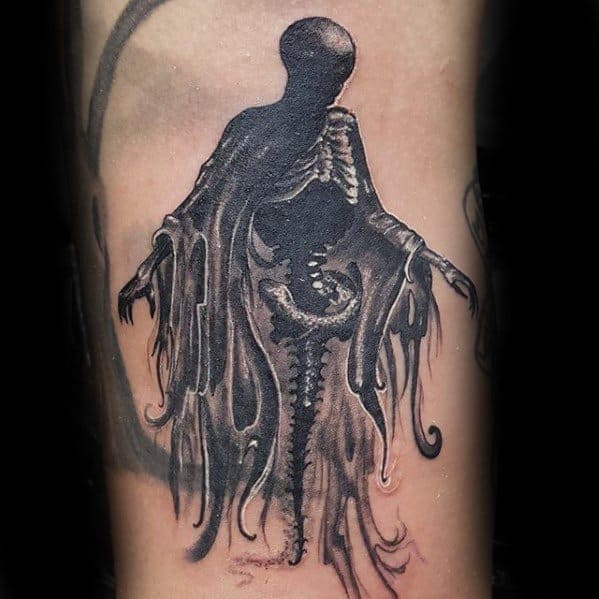 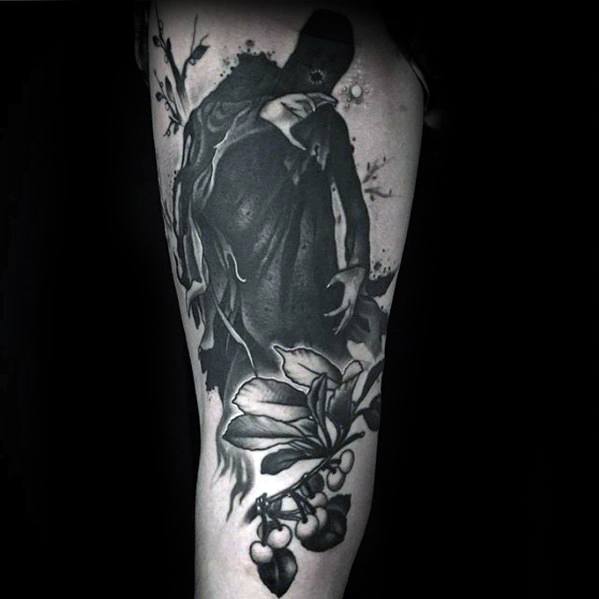 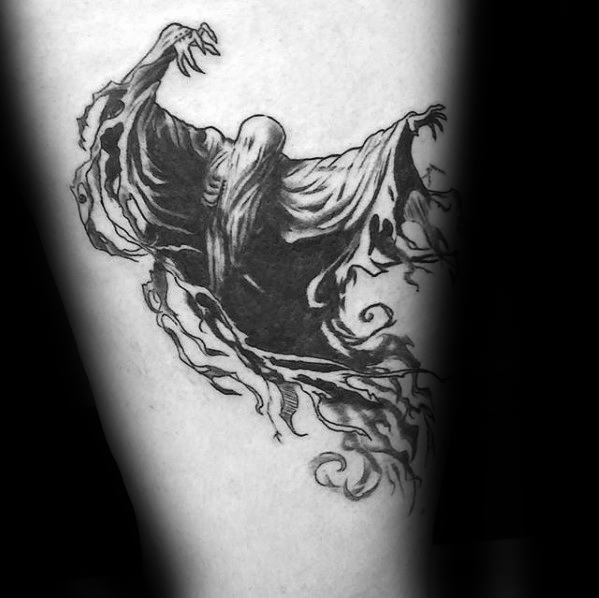 A hallows tattoo seems to be among the favorite Harry Potter tattoos. According to the legend in the Harry Potter universe, the person who possesses all three objects – the resurrection stone, cloak of invisibility, and the elder wand – will become the master of death. This tattoo reflects man’s desire to cheat death. 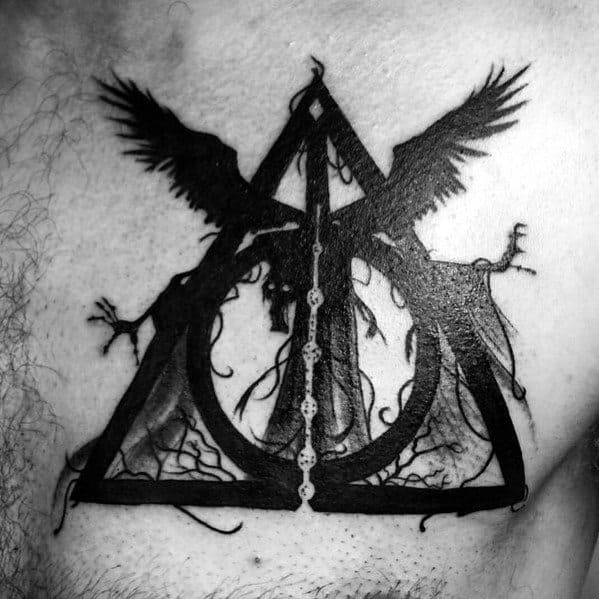 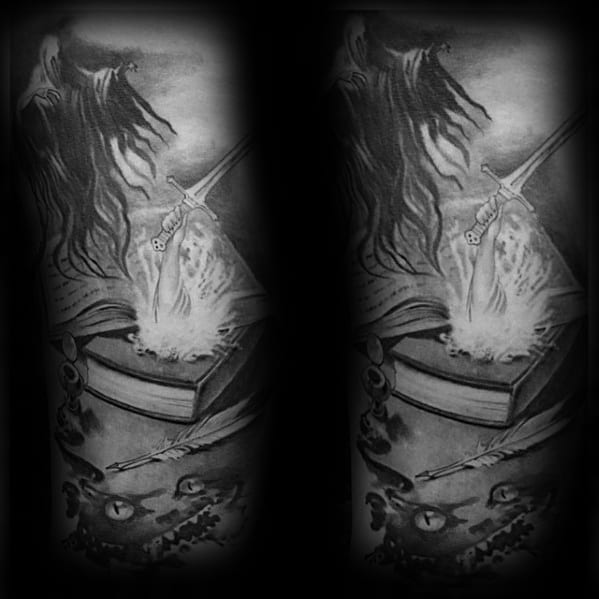