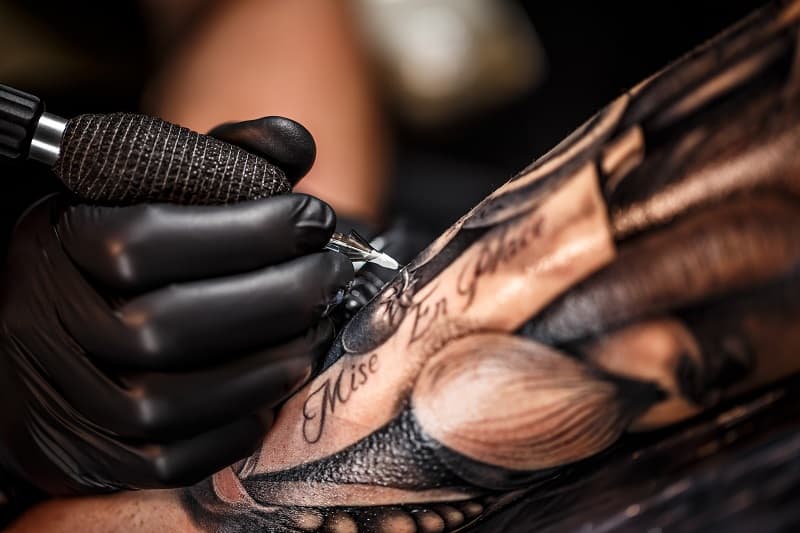 It can be hard to imagine a time when people with tattoos were looked upon as outcasts. While it is true there is still some hostility from small sectors of the public (mainly the elderly), tattoos have never been more readily accepted. Whether you are fully covered or a clean skin, there is no denying tattoo culture has impacted popular culture. Not only are movie stars, musicians, athletes, and all manner of celebrities getting inked, but there are countless tattoo shows airing on cable networks and streaming sites. Despite the practice of tattooing being around for thousands of years, tattoos continue to fascinate people the world over. There are many interesting facts about tattoos that have come about over that time. From how tattooing has evolved to the number of people tattooed, there is much to learn, with these 15 facts about tattoos sure to surprise you.

1.  More Woman Than Men Have Tattoos in America 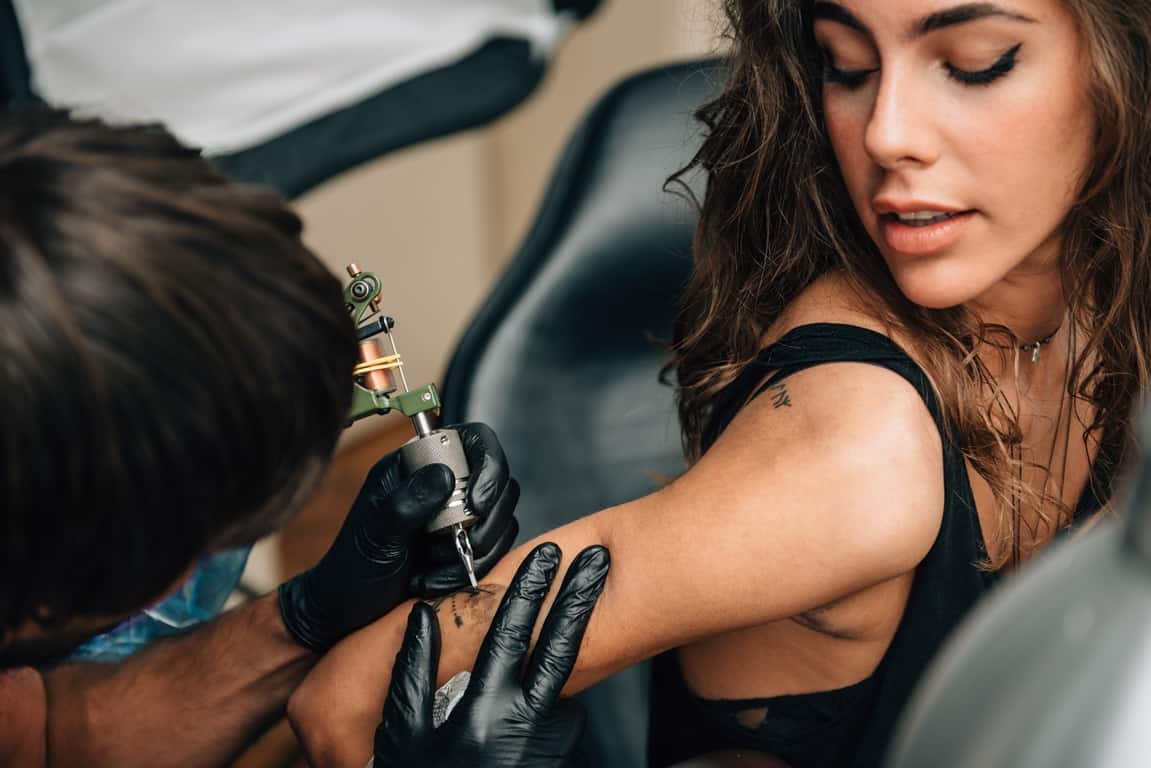 As crazy as it might sound, women are bigger fans of tattoos than men. A poll conducted by the TV series Best Ink and Lightspeed Research found 59% of women have tattoos compared to 41% of men. The poll also found 40% of women got their tattoo with someone else and that they take the process of getting inked more seriously than men.

“Women have a tendency sometimes of getting that little souvenir keepsake tattoo with deeper meaning, whereas men tend to go a little overboard and fill themselves up with larger pieces,” said Joe Capobianco, a 20-year tattoo artist who is also the head judge on Best Ink.

2. Urine Was Used by Russian Prisoners When Tattooing 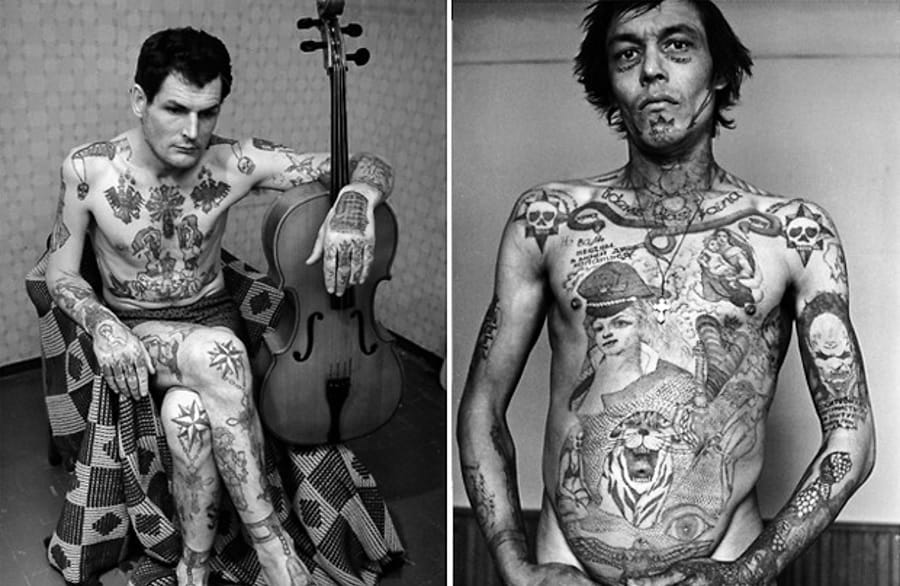 As absurd as it sounds, urine was often mixed with ink used by Russian prison tattooists. They believed urine carried an antiseptic quality that would help the tattoo heal. The ink itself was often taken from a ballpoint pen (this is why many Russian prison tattoos have a dull blue color), or if there were no pens, the heel of a shoe was burned and mixed with coal and urine to create the ink. To ink the tattoo, the prisoners used everything from sewing needles to sharpen guitar strings attached to electric shavers.

3. There Are Hundreds of Tattoo Skins Kept In Tokyo 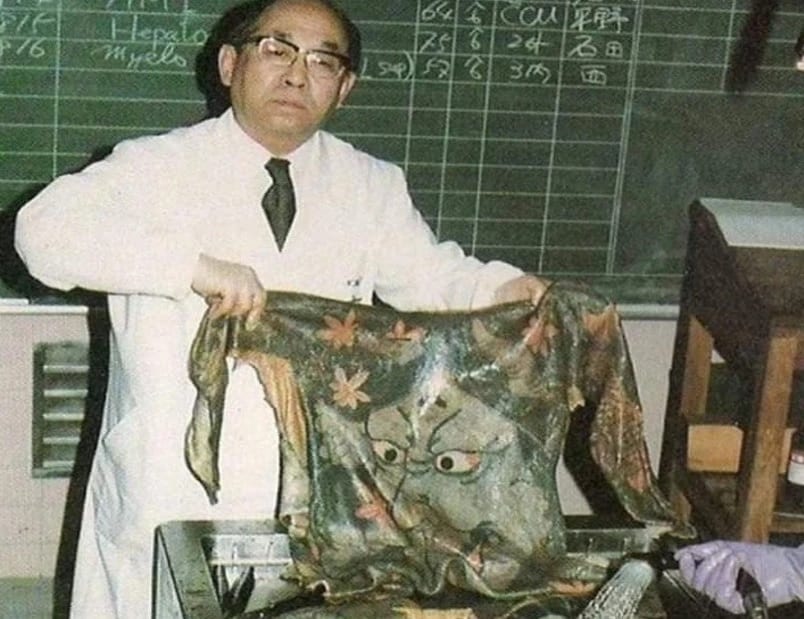 While tattoos are worn by the youth in Japan, they are more often than not associated with the Yakuza (the Japanese mafia). These powerful men often have their entire bodies tattooed with images that represent their standing in the criminal underworld. They keep them covered in public and are rarely seen unless they are bathing or sleeping. An interesting fact about these full-body tattoos is that many of them have been collected and cataloged by the Medical Pathology Museum at Tokyo University.

These were gathered by pathologist Dr. Masaichi Fukushi who was studying the effects of syphilis. When he found tattooed skin killed the lesions brought on by the disease, he began investigating tattooed corpses, removing the skin, and conducting experiments. It was believed Fukushi archived over 2,000 skins and took a further 3,000 pictures, but much of his research was lost during World War II, with the remaining skins ending up at the Medical Pathology Museum.

4. They Are Seen as a Status Symbols 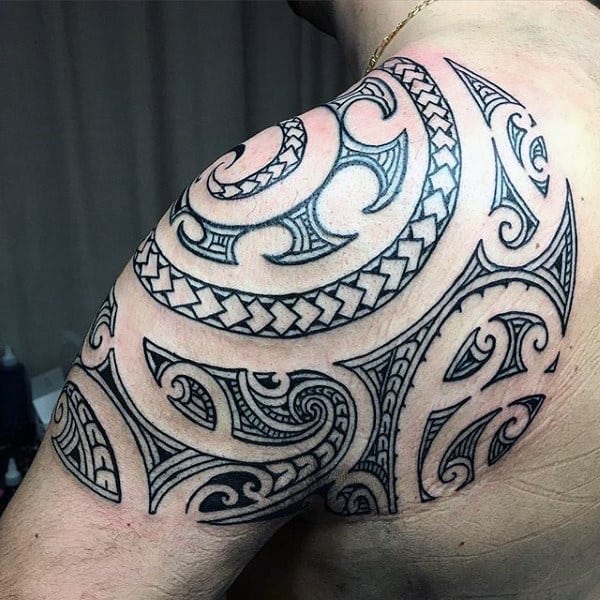 Whether you like it or not, if you have tattoos showing there is a fair chance you will be judged by someone who sees them. It is interesting how different people view a tattooed person. The Japanese fear people with tattoos as they associate them with the Yakuza. In America, they are often associated with the lower class, even though there are just as many middle-class people sporting them. Then you have New Zealand where tattoos are sacred and respected by others in society. The same goes for the Native American people, who would tattoo their victories on their bodies. At the end of the day, it shouldn’t really make any difference if a person tattoos on their skin or not.

5. There Was a Tattooed Barbie 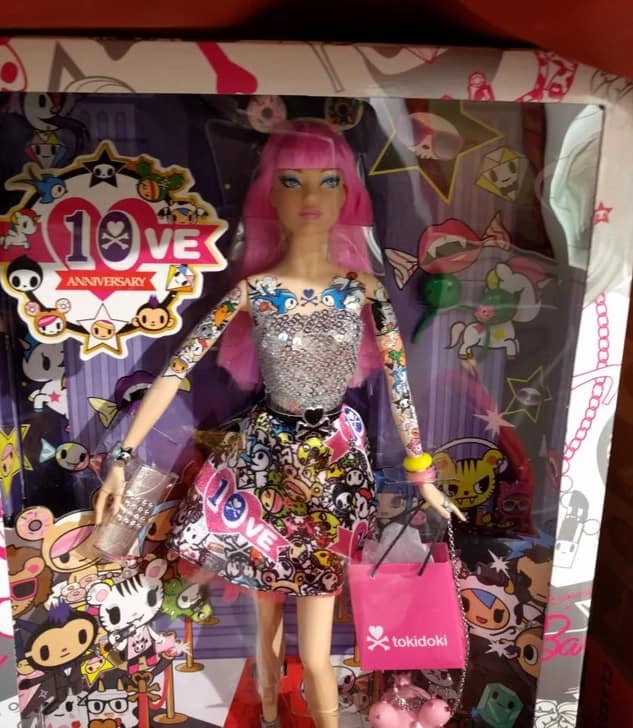 An American icon, Barbie has been the favorite doll of millions of girls across the world. Creator Mattel came under fire in 2011 when they partnered with Tokidoki, a Japanese-inspired lifestyle brand, and released a Barbie with tattoos. The offending doll had a pink bob and tattoos on her neck and shoulders. While parents were angered, Mattel assured them this Barbie was a collectors edition aimed at adults, with only 7,400 made (all sold out).

This wasn’t the first time they courted controversy with tattoos. In 2009 there was the Totally Stylin’ Tattoos Barbie that came with small stickers kids could put on the doll, along with a collaboration with Harley Davidson in 2008 that saw Barbie sporting a pair of tattooed wings on her back. 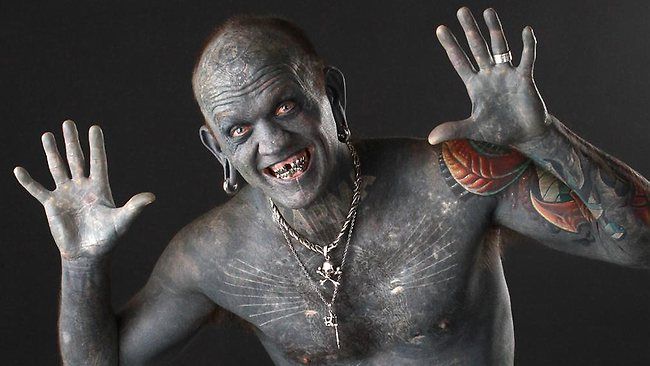 The Guinness Book of Records has many categories for those with tattoos, but the most famous record holder is Kiwi Lucky Diamond Rich. He is the official Guinness World Record holder of the most tattooed person in the world, with 100% of his body covered in ink. Incredibly every part of him is tattooed, including the insides of his eyelids, mouth, ears, and foreskin. He tattooed a black layer over his initial tattoos and has continued to add more since then. He has spent over 1,000 hours getting tattooed by over 100 various artists from around the world. A former performer known for juggling and sword swallowing, Rich is now a support worker at the Galiamble Men’s Alcohol and Drug Recovery Centre in St. Kilda, Victoria. 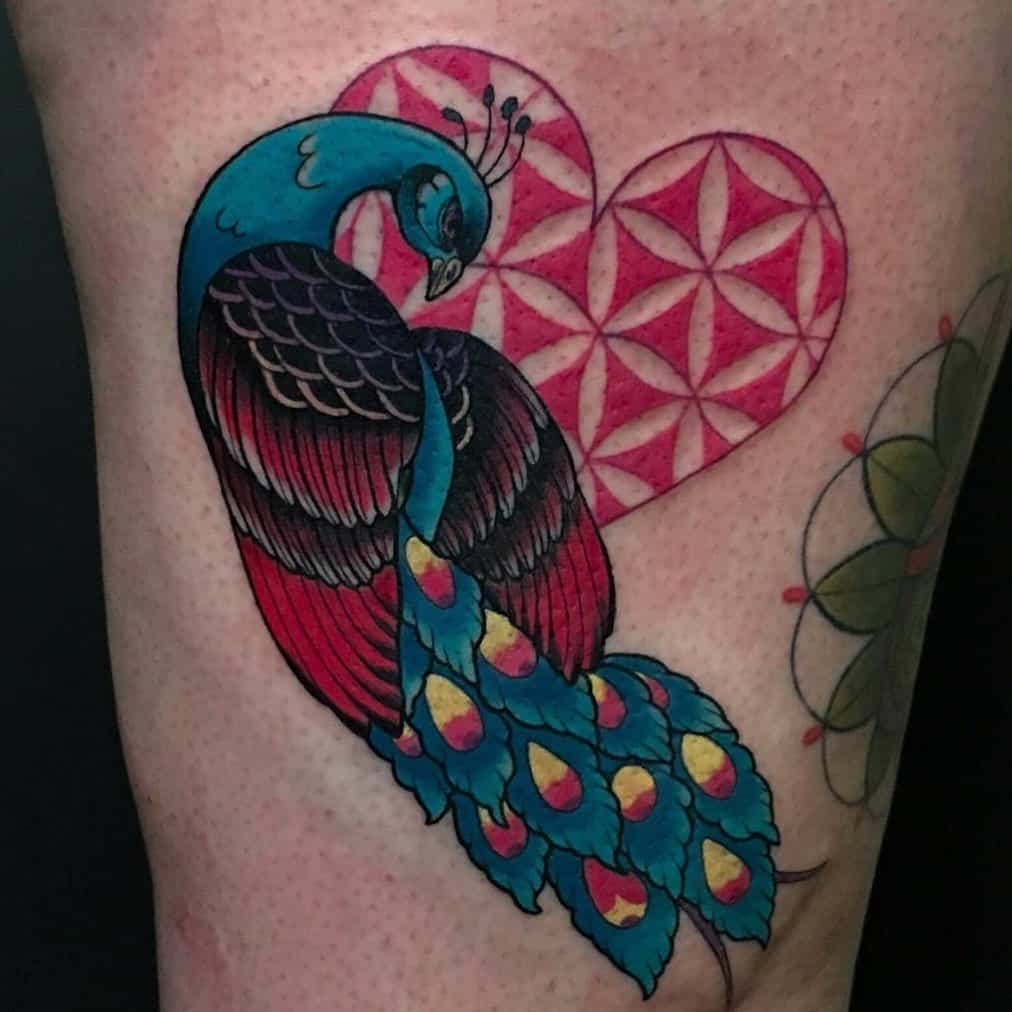 If you don’t eat meat you might want to make sure your tattooist is using vegan ink before getting tattooed. According to Urban Vegan, the majority of black ink used by tattoo artists around the world contains the charred bone remains of animals. Other parts of animals found in ink include animal-derived glycerin, gelatin (made from the tissue of pigs and cows), and shellac (crushed bottle shells). It all sounds rather disgusting, but these animal products help bind the ink. Vegan ink on the other hand uses all-natural ingredients. For example, vegan black ink is created using carbon or logwood. Vegan ink also uses vegetable-based glycerin to help bind the ink. The best way to know what your tattoo artist uses is by asking them.

8. Tattoo Ink Is Found on the Second Layer of Skin 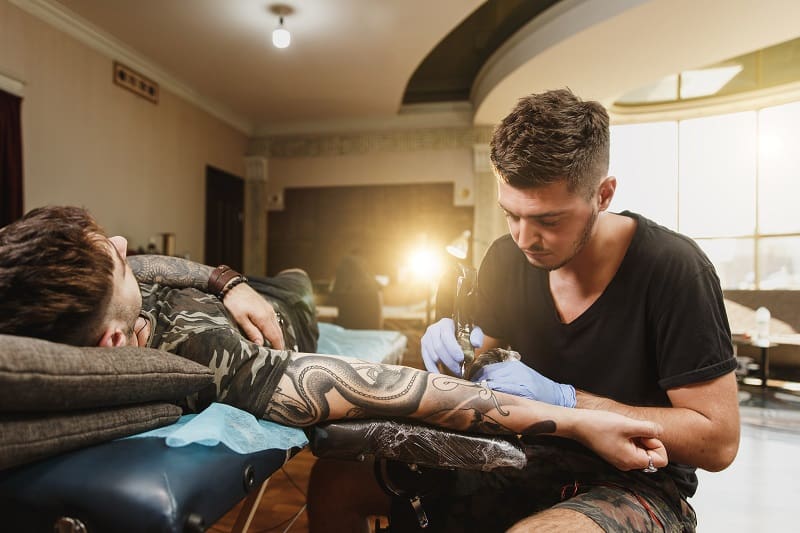 When you are tattooed, the electric tattoo machine actually injects the ink into your second layer of skin, known as the dermis. This is so the ink is secured and protected by the first layer of skin, known as the epidermis. As the skin is being damaged by the needles injecting the ink, the body responds by sending white blood cells to check out the problem. Due to the pigment particles of the ink being too large, the white blood cells cant break them down. This means the ink stays where it is and you are able to have a fantastic-looking tattoo on your body.

9. Confucius Wasn’t a Fan of Tattoos 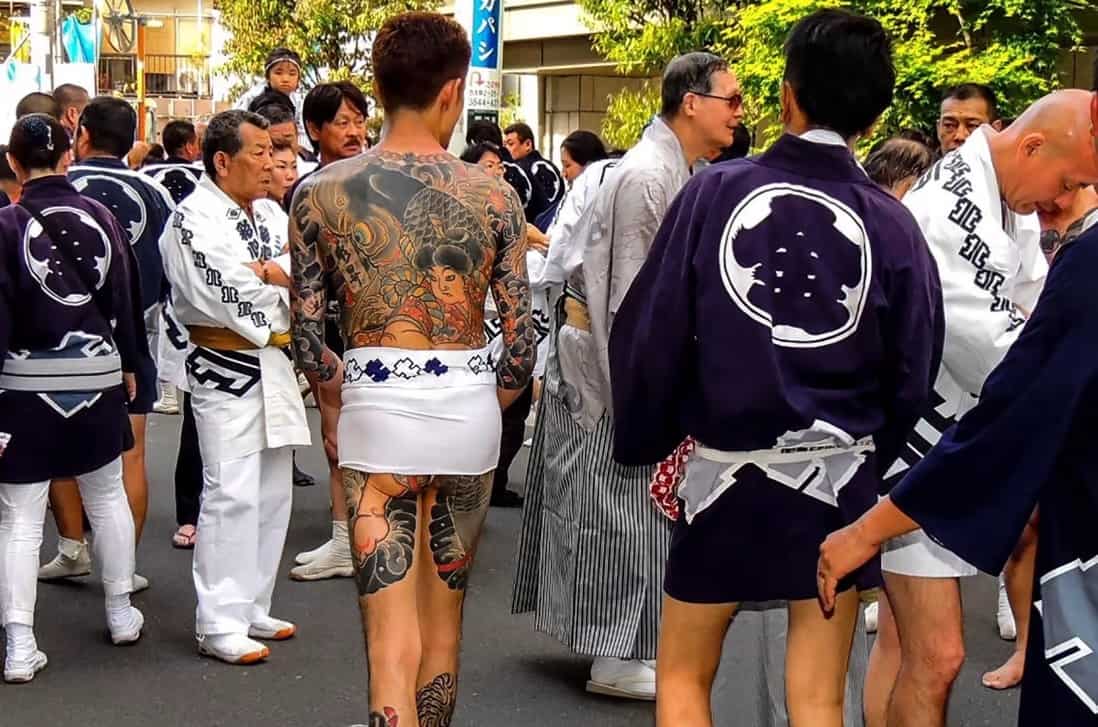 The great Chinese philosopher didn’t get tattoos. Confucious believed the body was a pure entity that shouldn’t be defiled by tattoos. His belief was held by many in ancient China. It was seen as immoral. Tattoos were used to define lower-class citizens. As Gareth Davey, an anthropologist and social psychologist at Webster University Thailand told the South China Morning Post, “In Chinese history, tattoos were used to denigrate ethnic minorities, punish criminals, and brand slaves.” While views have slightly changed over the years, tattoos are still taboo in parts of China. 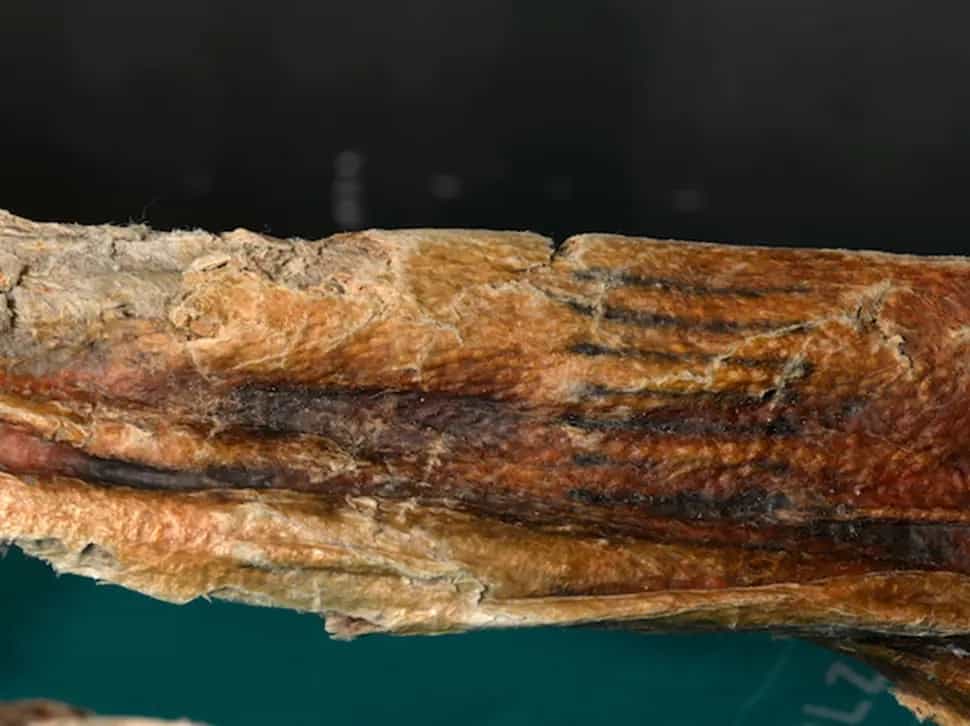 Nicknamed Ötzi the Iceman (he was found in the Ötztal Alps, near Hauslabjoch on the border between Austria and Italy), this mummy has the oldest recorded tattoos. He has 61 tattoos across his body, including his back, legs, and arms. Many of the tattoos are simple in design and are just lines or dots. The majority of the tattoos on the mummy’s body were in places he suffered from joint and spinal degeneration, leading experts to believe the tattoos could have been therapeutic.

11. The First Electric Tattoo Machines Was Inspired by Thomas Edison 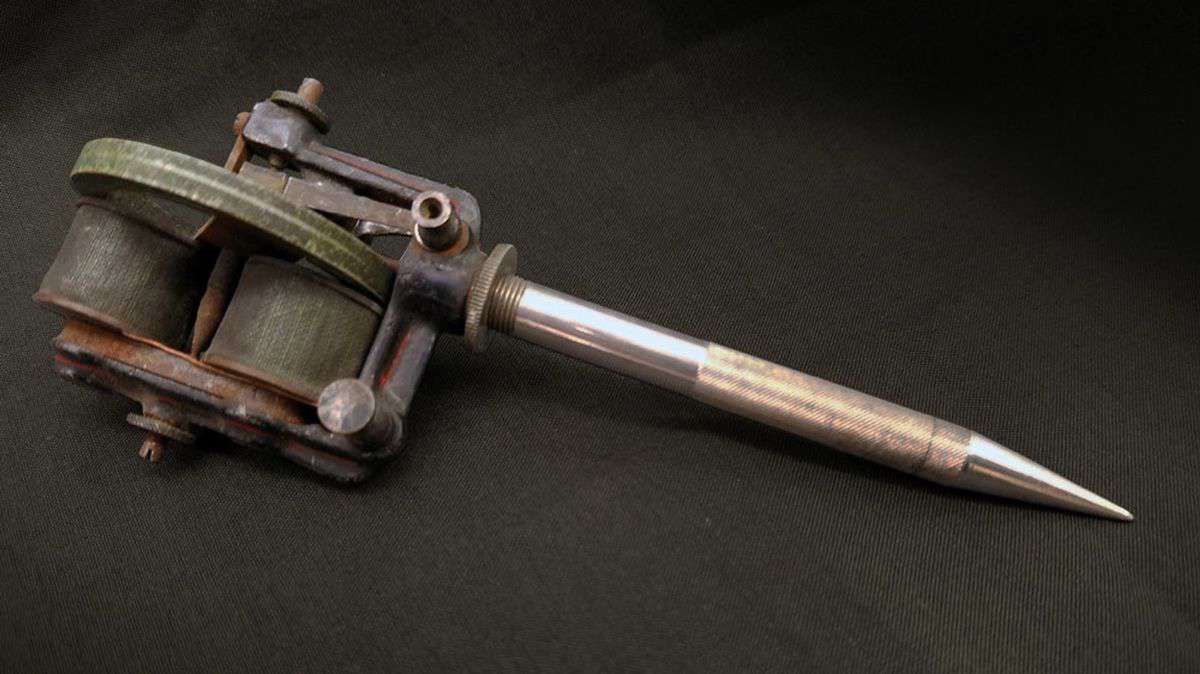 Simon O’Reilly was the man responsible for creating the first electric tattoo machine. Moving to New York in 1886, the tattoo artist made a name for himself as one of the city’s most respected tattoo artists. It was in 1891 when O’Reilly filed a patent for the very first electric tattoo machine. It was based on Thomas Edison’s 1876 rotary-operated stencil pen patent. While O’Reilly is credited with making the first tattoo gun, it’s believed there was another experimenting during that time with tattoo equipment. O’Reilly just happened to get the patent first.

12. Black Ink Is the Easiest To Remove 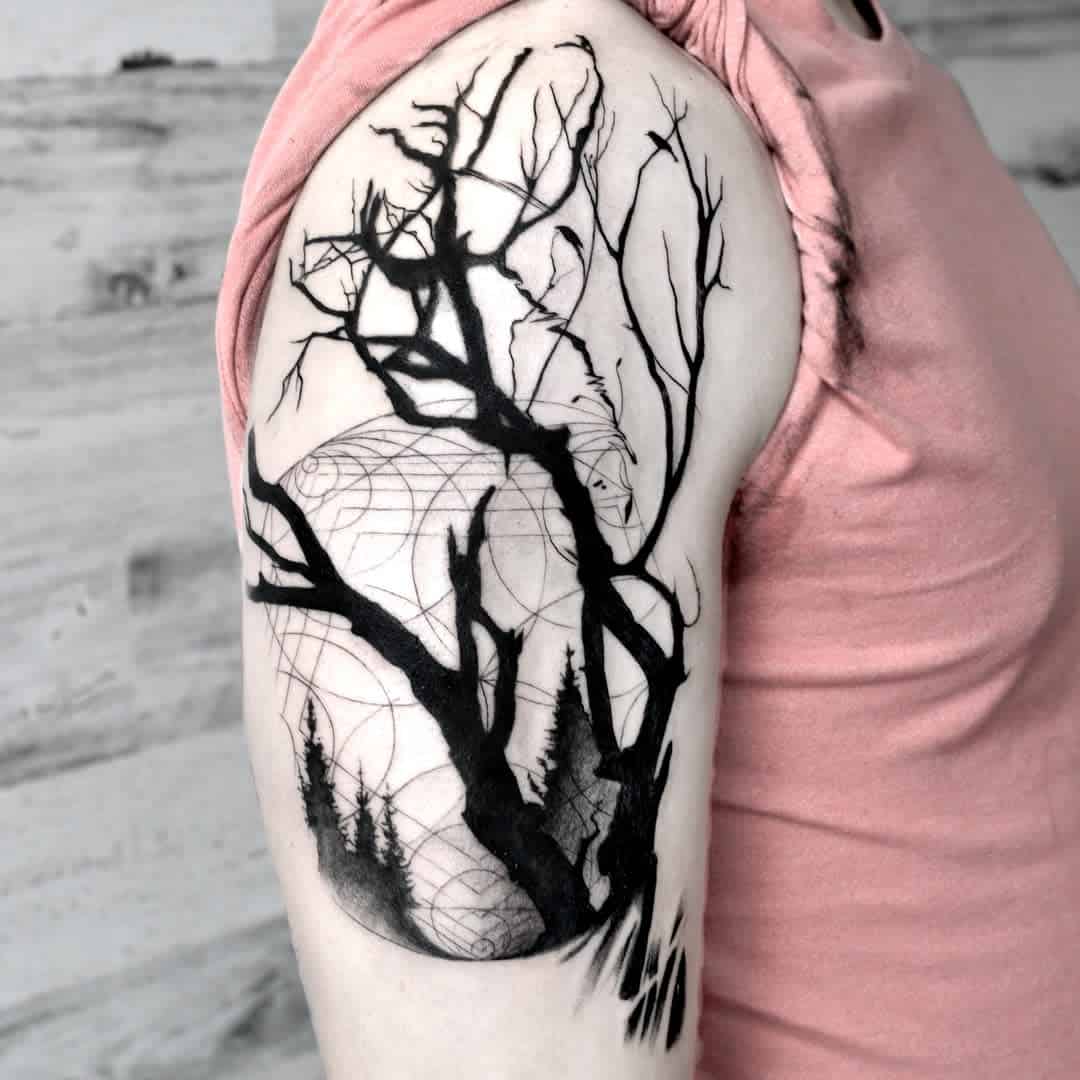 Here is an interesting fact about tattoos you probably aren’t aware of; black tattoo ink is the easiest ink to remove from the human body. The reason for this is that the lasers used to remove tattoos are configured to destroy black ink. Red is the second easiest tattoo color to remove. When it comes to other colored inks, blue, green, and purple are much harder to remove and generally take numerous sessions.

13. People With Tattoos Are Experience Seekers 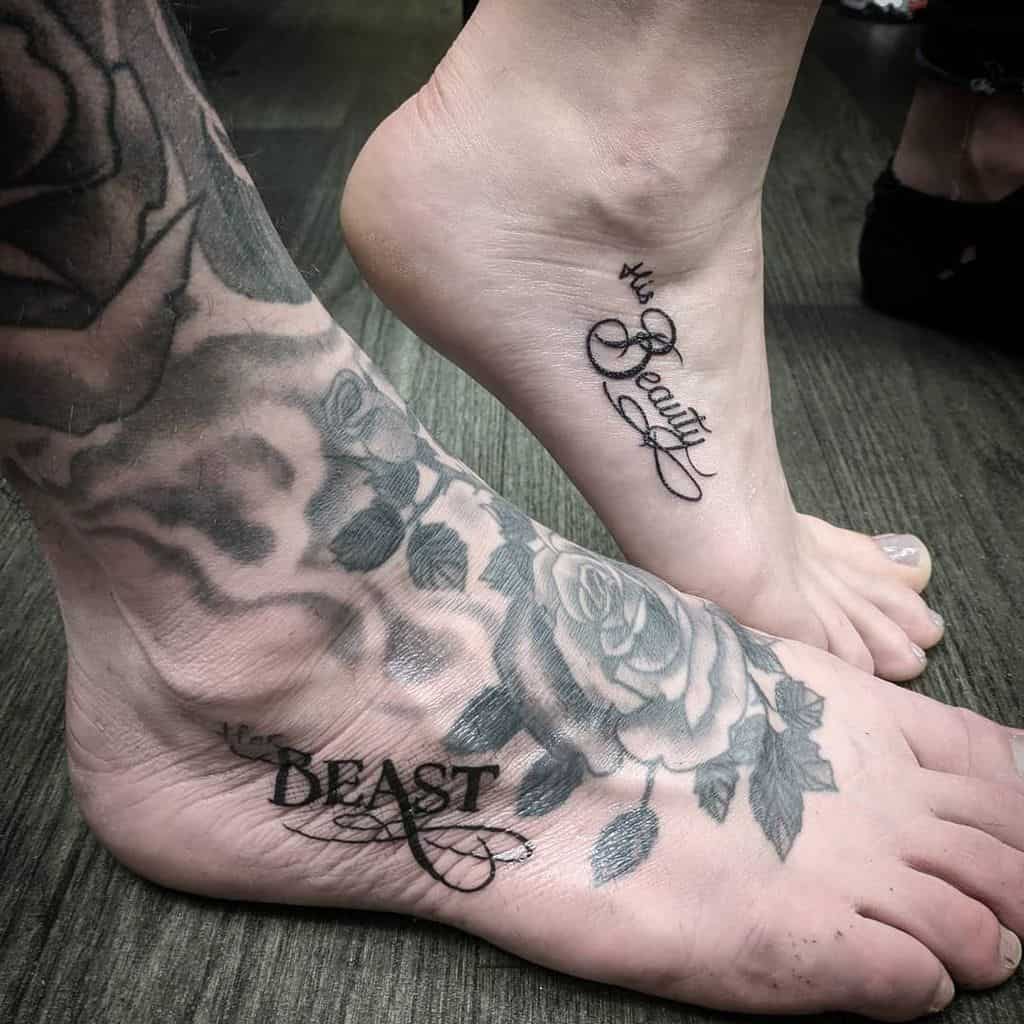 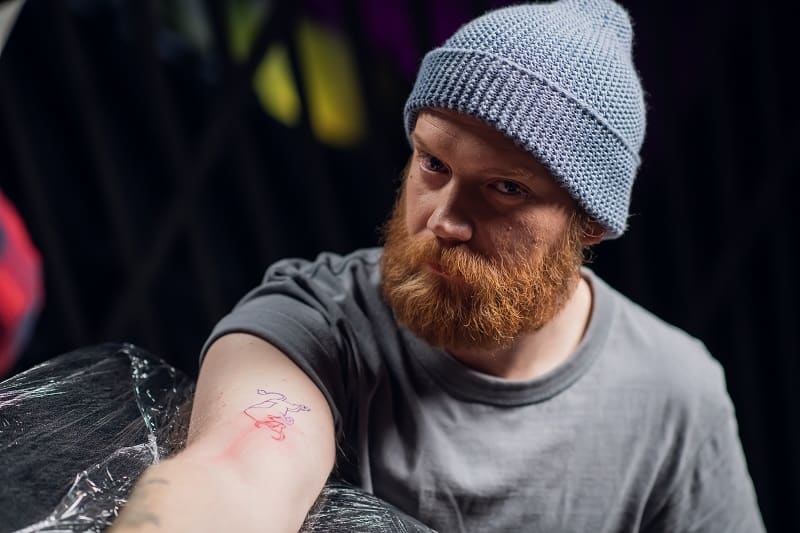 Fun fact: Americans love getting ink. Compare Camp did some research into tattoos and the art of tattooing and found that Americans spend a whopping $1.65 million a year getting their body tattooed. That is an unbelievable amount of cash. They also discovered that 27% of Americans are willing to pay up to $100 for their tattoos. It was also pointed out that 6% are happy to fork out $2,500. The bottom line is Americans really like getting inked.

15. Tommy Lee is Part of the Mile High Tattoo Club 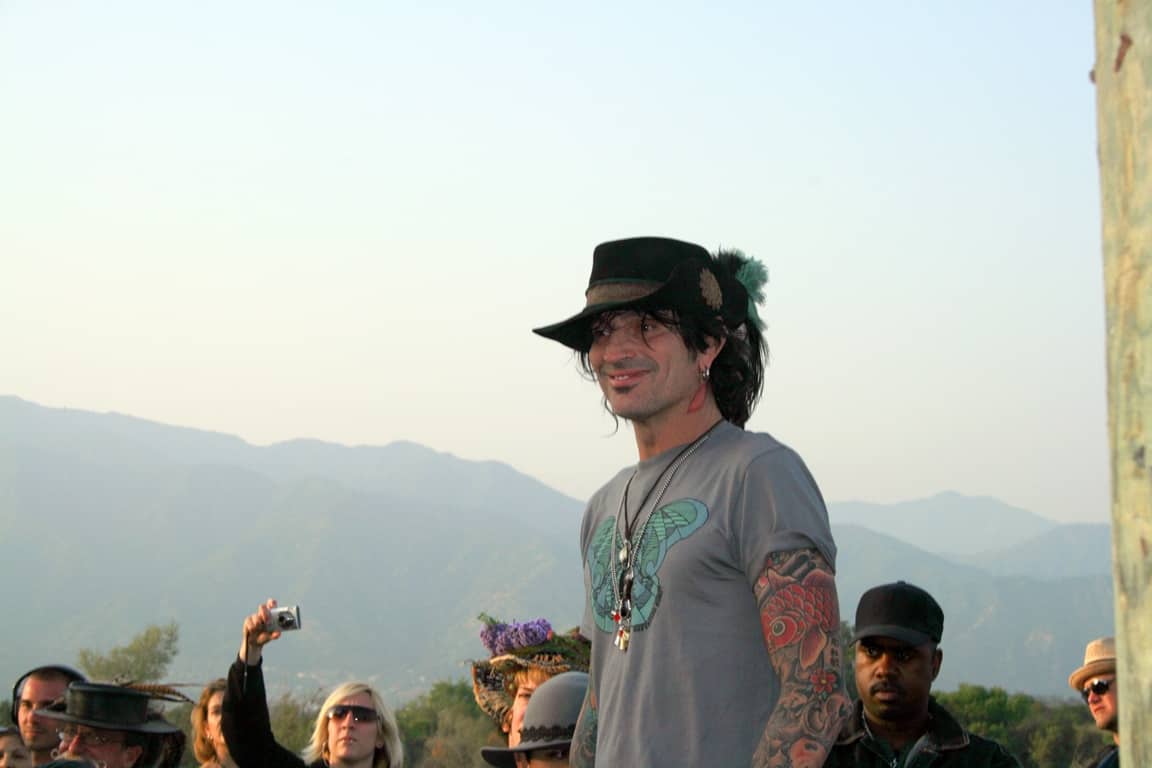 There isn’t much the Motley Crue drummer and one-time husband of Pamela Anderson hasn’t done in life. When it comes to tattoos, Tommy Lee has his fair share. He also holds the Guinness World Record for being the first person to get tattooed while flying. For some reason, the lovable larrikin decided to get inked 45,000 feet in the sky. While flying from Burbank to Miami in his private Gulfstream jet, Lee was tattooed by Mario Barth of Starlight Tattoo. The tattoo itself was a black and grey peacock that Lee got on his right thigh. It’s believed the tattoo cost a cool $150,000, but nobody is sure who paid for it.