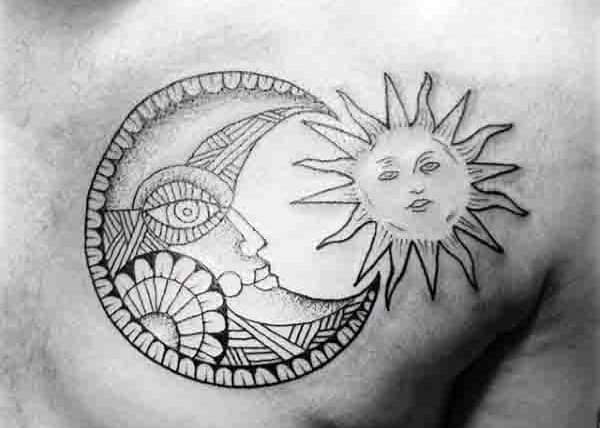 A moon tattoo idea is most often linked to motherhood, femininity, and fertility as a predominantly female symbolic tattoo contrasting the masculine sun.

Sailors, hunters, and seekers have been guided by the light of a new, crescent, or full moon, while the sea and women’s fertility cycles alike move with the waxing and waning moon phases.

A moon design can also emphasize the cyclical, the passage of time, or be utilized in geometric designs. They are a great way to use ink in expressing powerful feelings or behavioral characteristics.

Moon symbol body art reflects a variety of cultures and different concepts, gods, and beliefs about the celestial body, with links to everything from angels and space travel, to the Horoscope and pagan religion.

Below you’ll find different approaches to moon tattoo meanings and application styles that you can incorporate into your next piece of tattoo design, or use as the basis for your own interpretation of a classic tattoo idea. 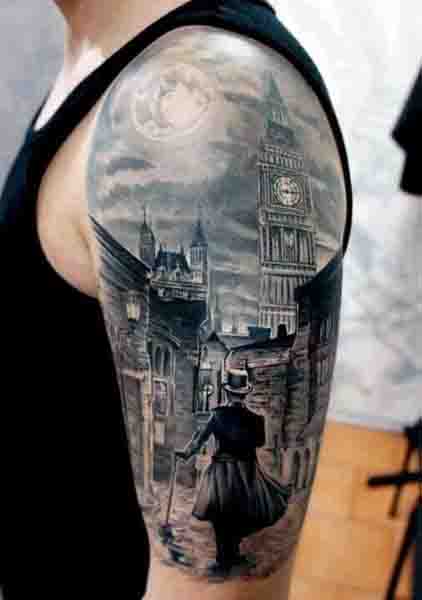 A moon tattoo is a powerful symbol that can be interpreted in many contrasting ways.

A half-moon tattoo is often used to represent balance, while a crescent moon can reference moving past difficult times to a moment of rebirth. The whole night sky with moon and stars can be linked to concepts of dreams and freedom.

A full moon can be linked with our animalistic side or represent eerie concepts of witchery.

The other classical moon tattoo idea ponders the duality of light and dark, sun and moon, and sometimes even good and evil. These can be represented by the moon god (man in the moon) or a more traditional moon goddess figure. 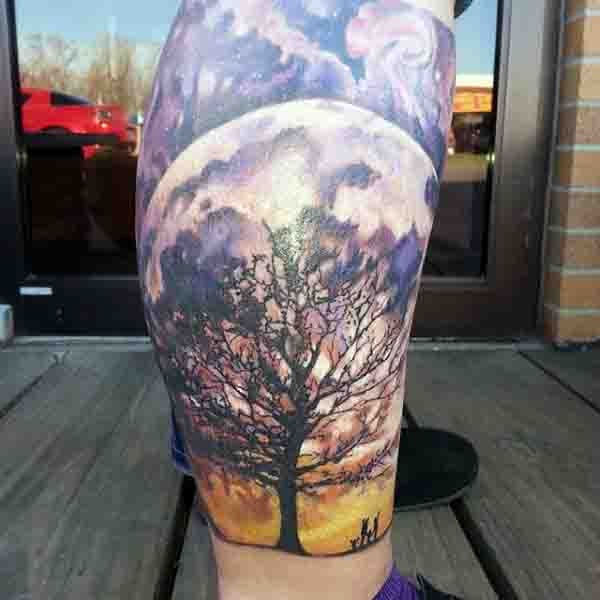 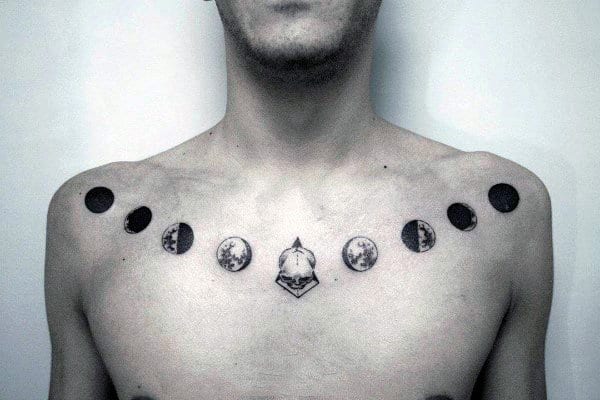 Another common concept for moon-inspired tattoos is imagery showing all the different stages in the lunar cycle – including the waxing moon and waning moon – that symbolizes the endless process of life, death, and rebirth.

A moon phase tattoo also emphasizes the passing of time and the fact that things recur cyclically.

This kind of moon cycle tattoo design lets the composition of the piece flow and makes for a dynamic, interesting body art interpretation.

It doesn’t matter if it’s a full moon tattoo, waxing moon, or even a blue moon, these lovely tattoos are full of symbolic meaning and are a great way to express powerful feelings of interconnectedness and unity with the night sky and natural world. 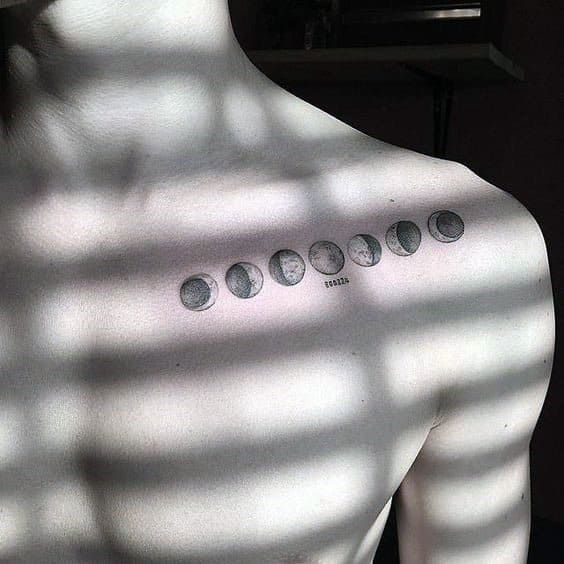 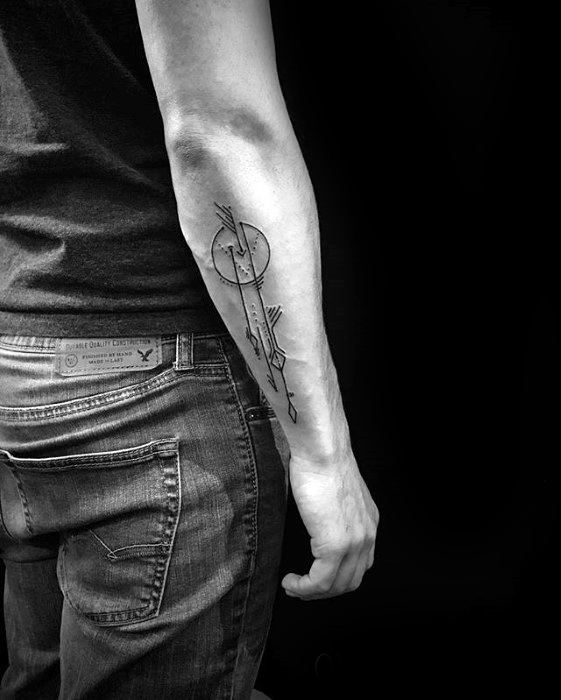 Arrow tattoo symbolism often involves traveling in a new direction (physically, mentally, or spiritually) and can reference anything from a new chapter in one’s life to a new relationship or career path.

Most often moon and arrow tattoos are linked to protection, positive momentum, and decision making.

They include compass tattoo ideas, constellations, Zodiac tattoos, or even matching tattoo arrow designs that reference the moon to create a nighttime aspect.

Arrow and moon designs can be in the form of a minimalist tattoo or feature geometric, abstract, or wild and colorful aspects. 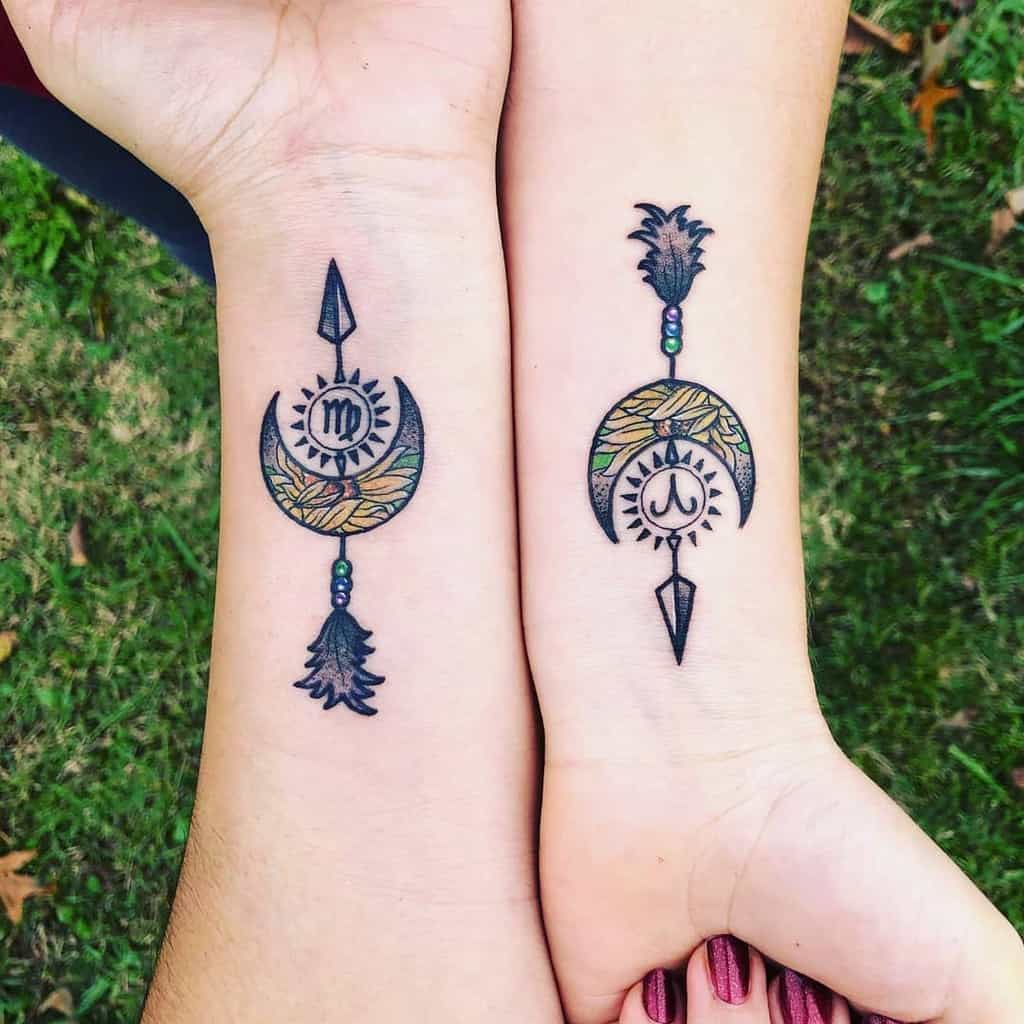 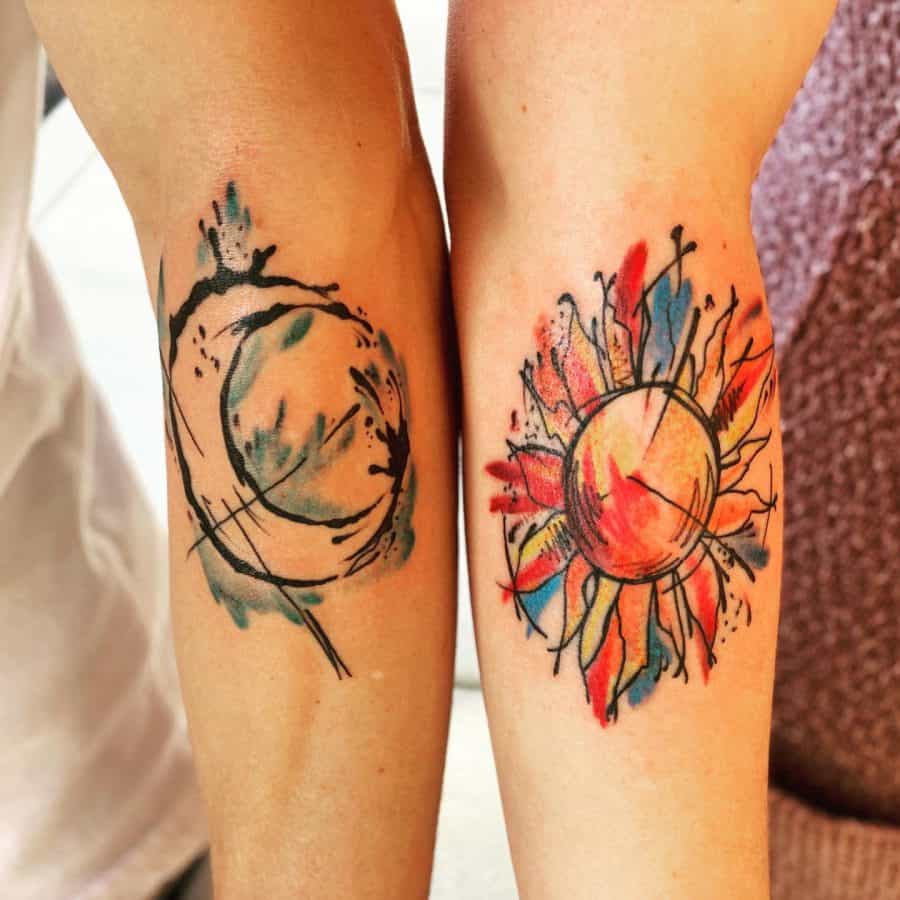 In every culture, in every era, in every place, there’s reverence, mythology, and superstition tied to the sun and the moon symbol – they are two sides of a coin central to the core of every society. It’s for this reason they’re so popular as a tattoo idea worldwide.

The sun and moon tattoo design symbolize the complementary unity of opposites. It’s polarity but without opposition. This isn’t good vs evil, it’s a masculine symbol and a feminine symbol, cooperation not conflict.

While the sun sacred symbol is the life-giver, the moon symbol is fertility and the cycle of birth and rebirth. Most of all, the sun and the moon together symbolize perfect wholeness and balance.

Images of the sun and moon make for a perfect matching tattoo: The sun can be as easy as a small tattoo circle with rays against a crescent moon outlined amongst other lunar traits. 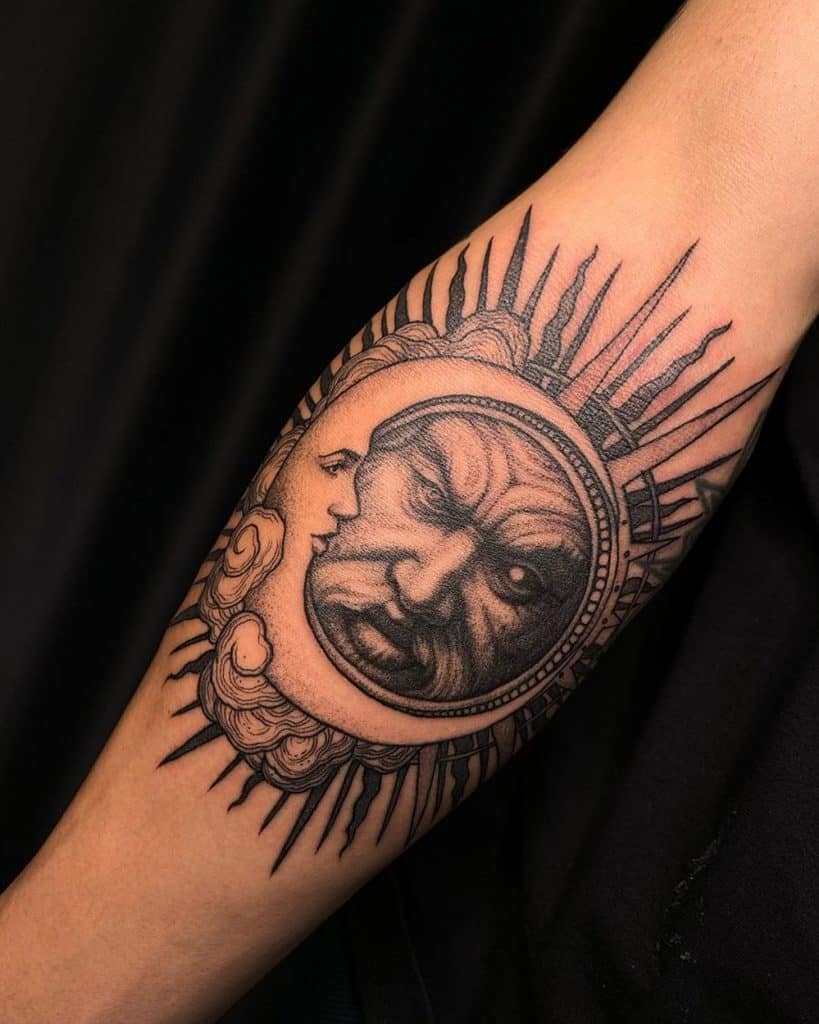 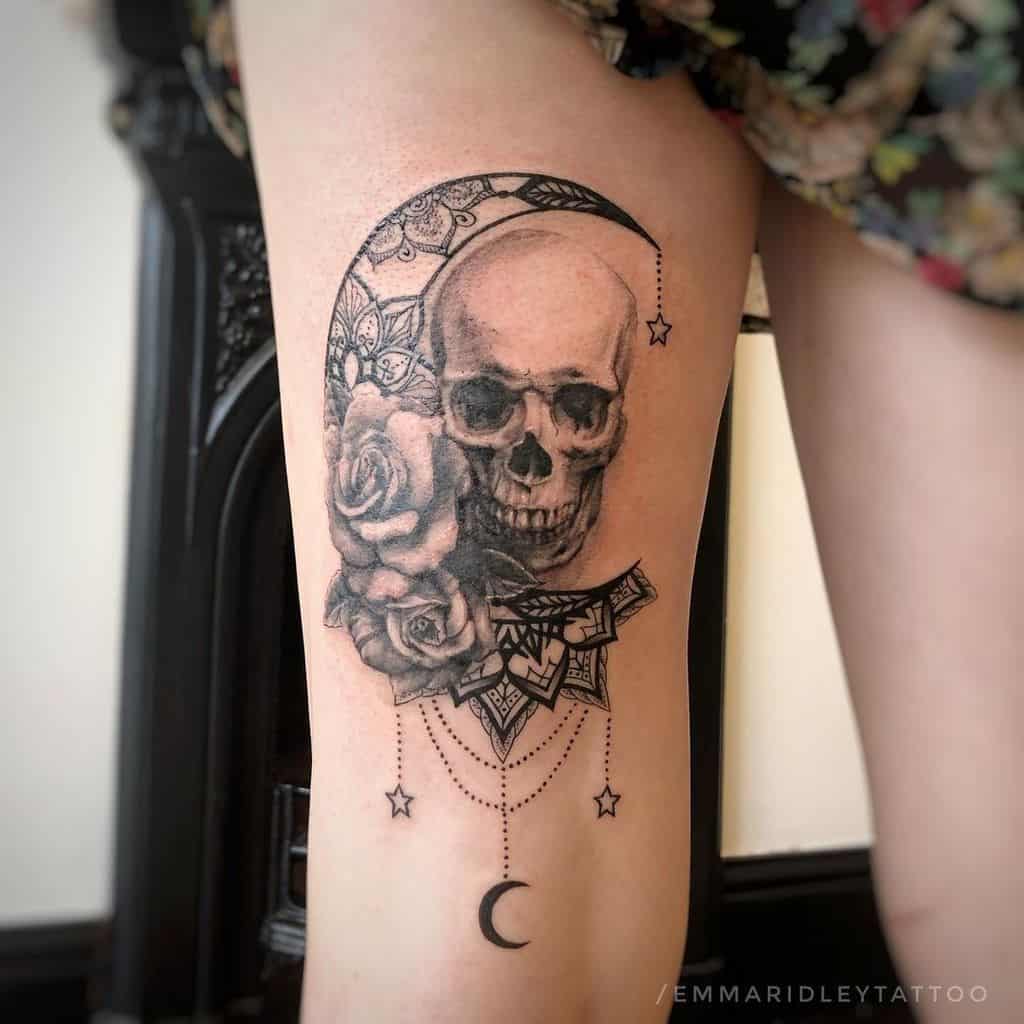 There are many family connotations between the moon and stars, with the moon seen as the mother figure and the stars all her multiple children.

Other types of moon designs represent the cyclical nature of life and positivity associated with new beginnings, while there are a few more now linked to the religion of Islam.

For other ink enthusiasts who dig the nighttime, their star tattoo can incorporate the moon sign and build on principles of astronomy, the Zodiac, or the night sky in wider imagery. 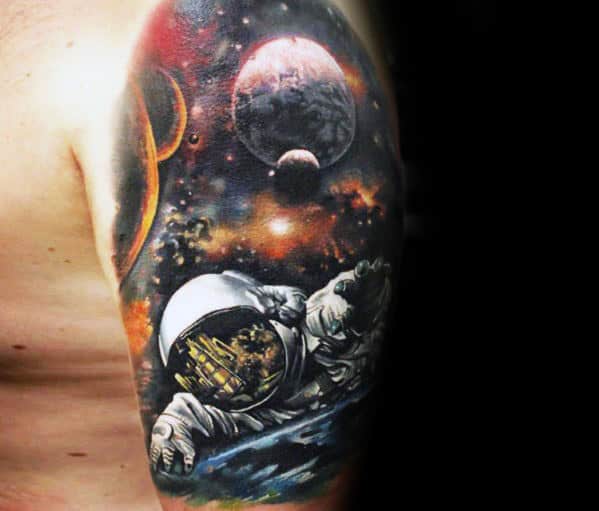 6. The Moon in Tribal Tattoo 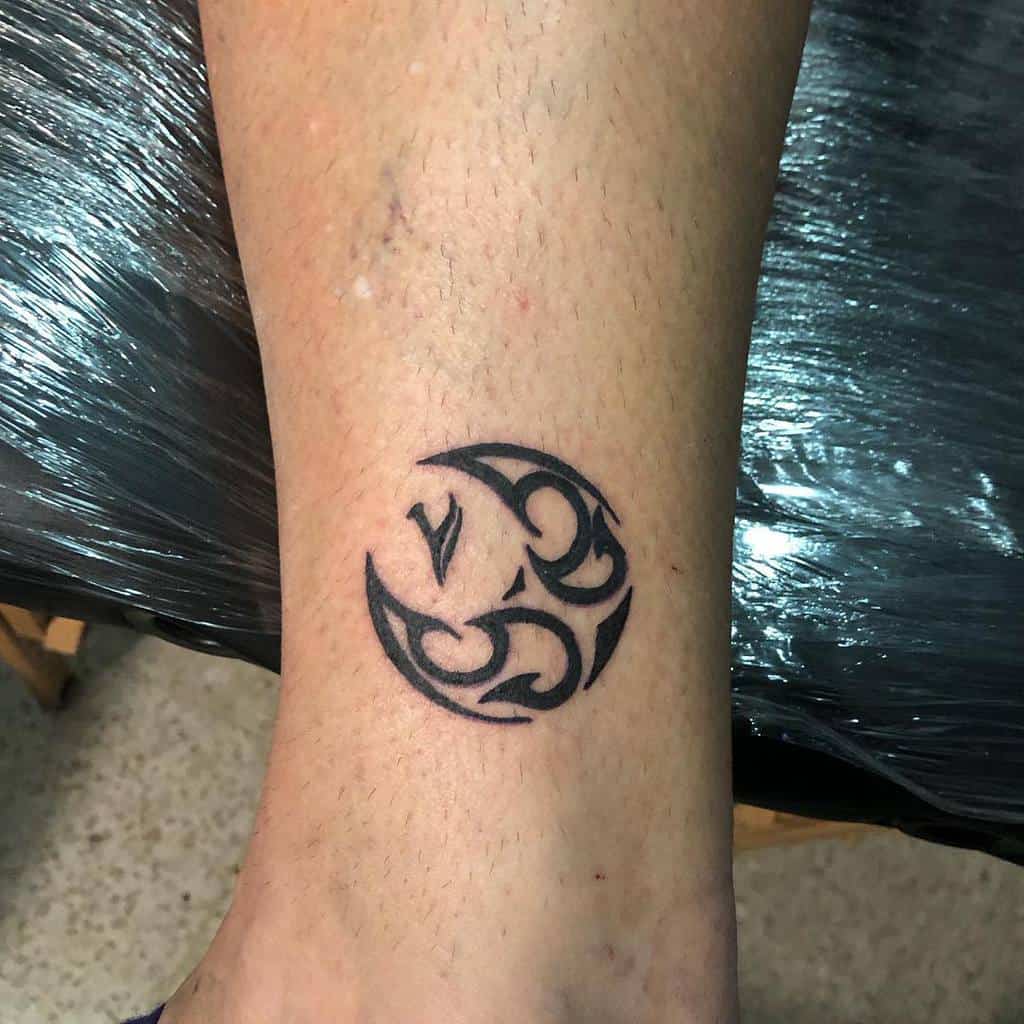 The moon is a powerful totem in tattoo art and a heavily used focus of tribal tattoo, especially from cultures with a warrior background, such as the Celts, Norse, and Native American cultures.

The moon is the companion of the hunter or the warrior who ventures out at night to serve his tribe, or the domain of the Wise Woman who heals, salves, and makes predictions.

The moon is also a symbol of tides, time, and Mother Nature’s effect on all creatures. 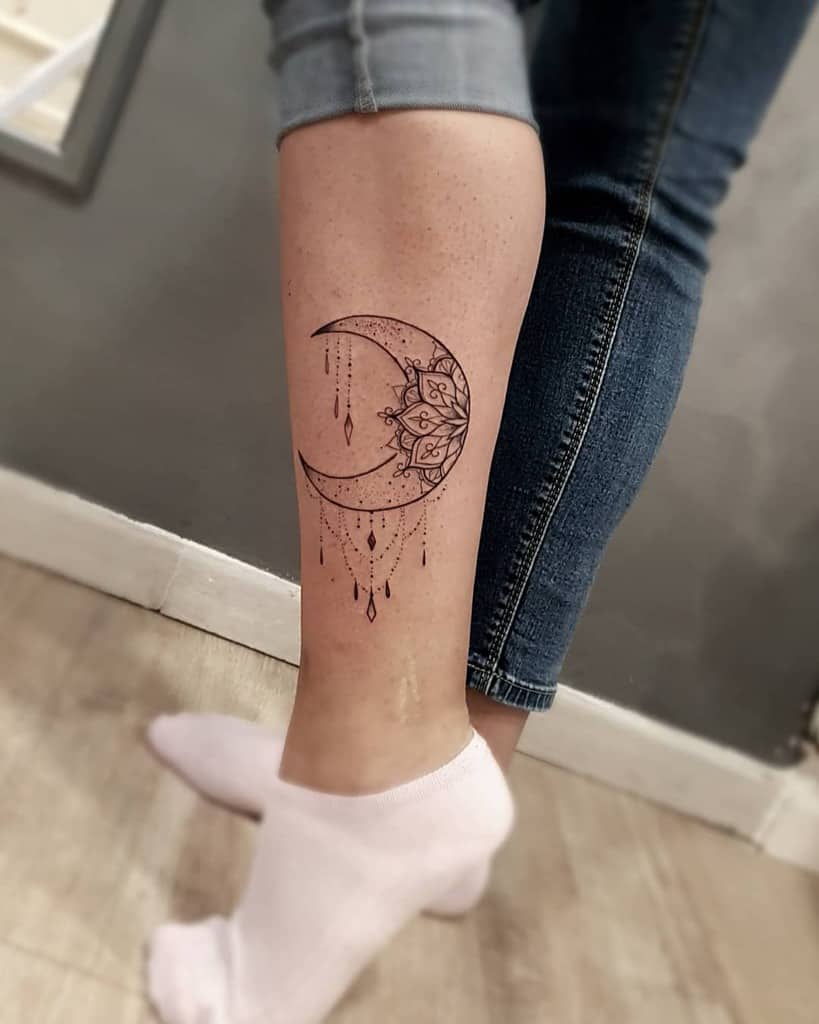 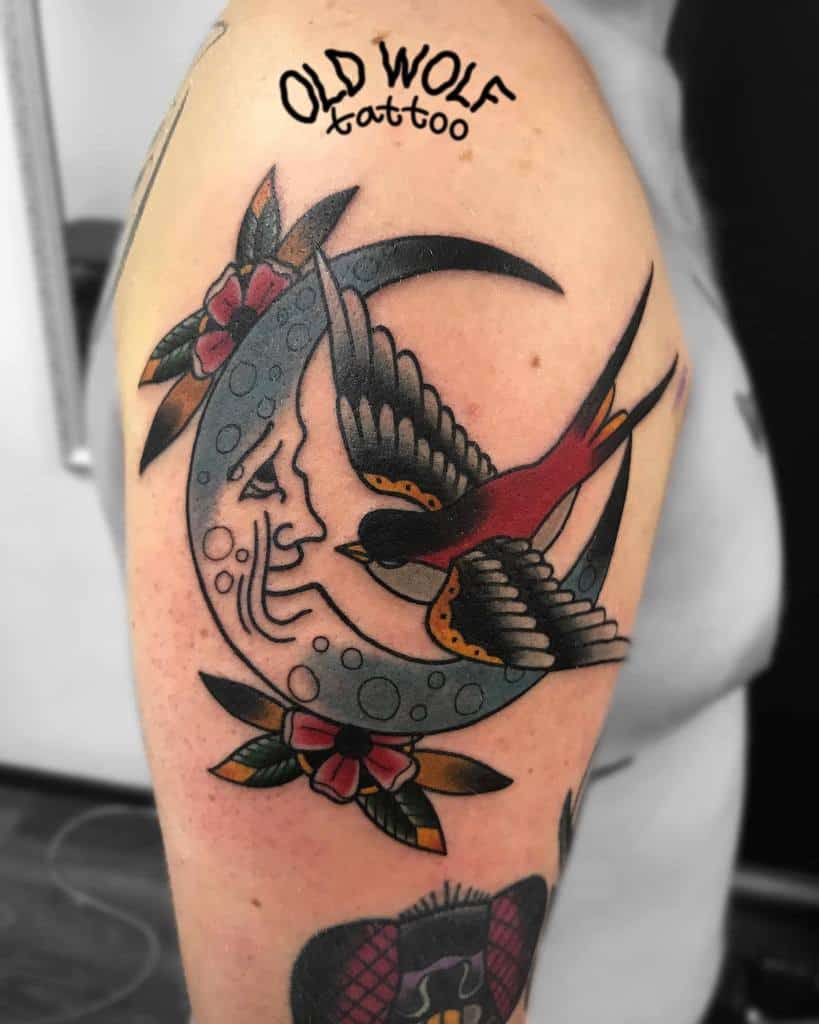 Concepts will develop differently depending on what you pair the crescent moon with. It’s a hugely personal symbol with important ties to every tattooing culture.

This view is further borne out by the half-moon tattoo being a symbol related to birth cycles, fertility, rebirth, and more general patterns of womanhood. 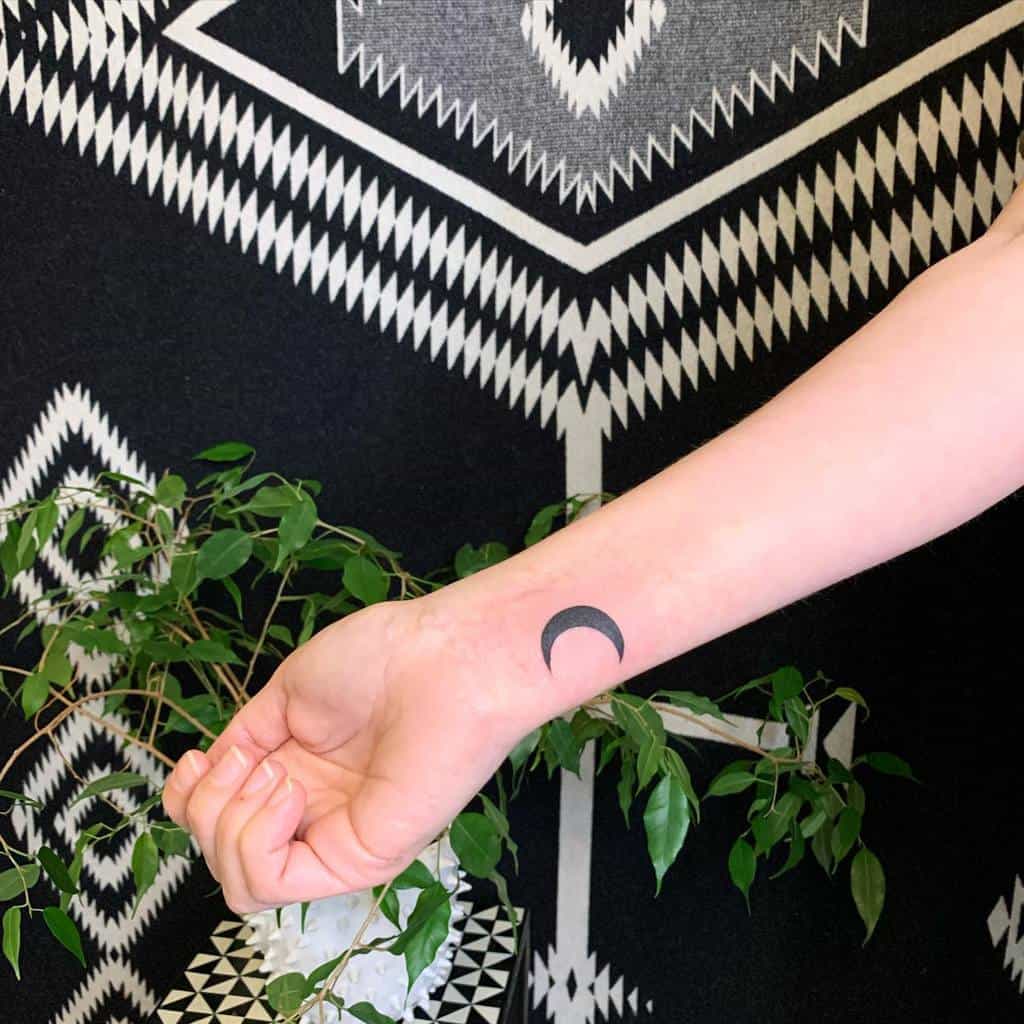 8. The Moon Symbol, Wicca, Witches, and the Triple Goddess Tattoo 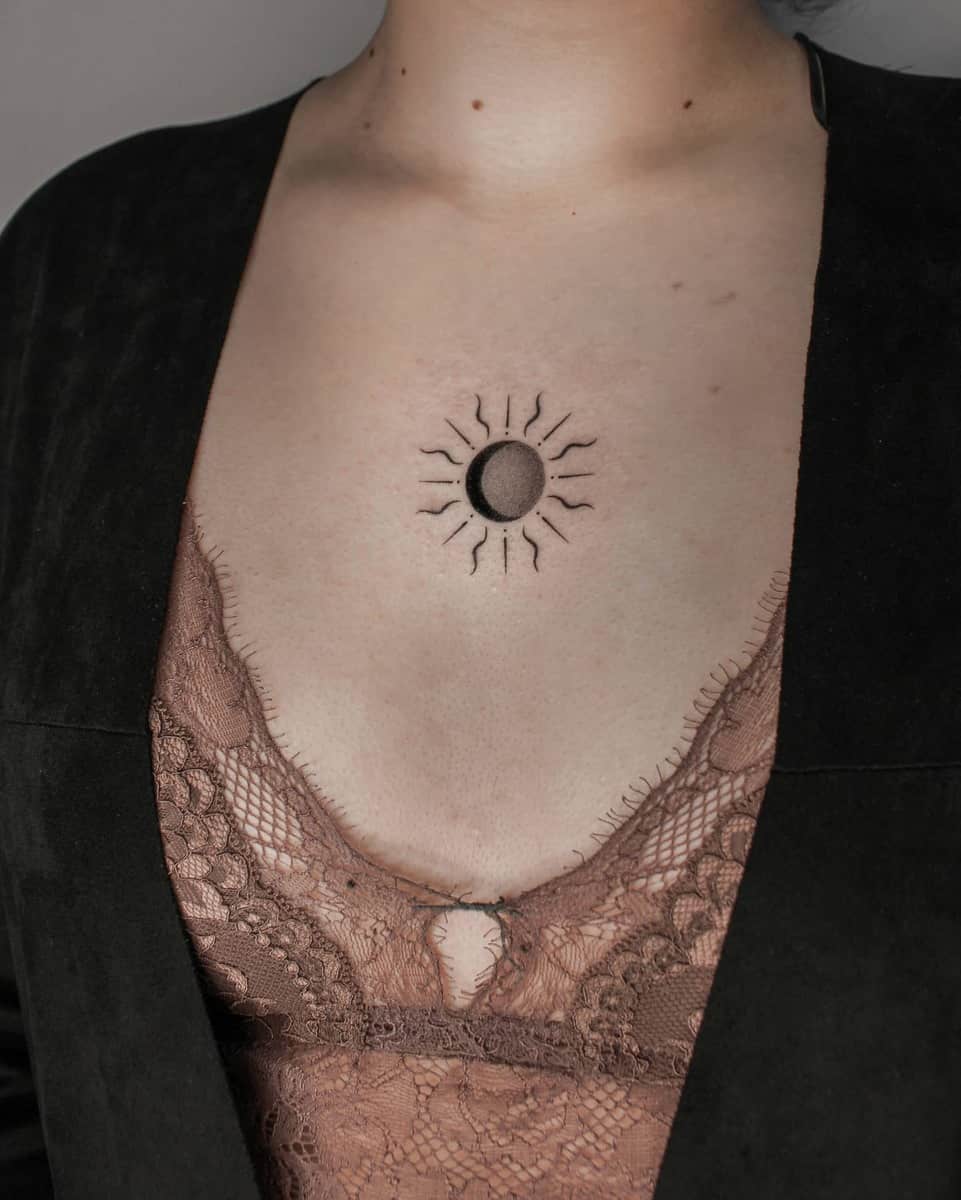 Witchy tattoo ideas come in a variety of descriptions linked to Wicca and the arcane or macabre. This imagery could include a skull, black cat tattoo, the moon, the triple goddess, a broomstick, and/or pentagram symbols.

The triple goddess is a feminine Wiccan symbol representing three phases of the moon aligned with the three phases that women go through in their lifespan.

Each life phase is represented by a Greek goddess: 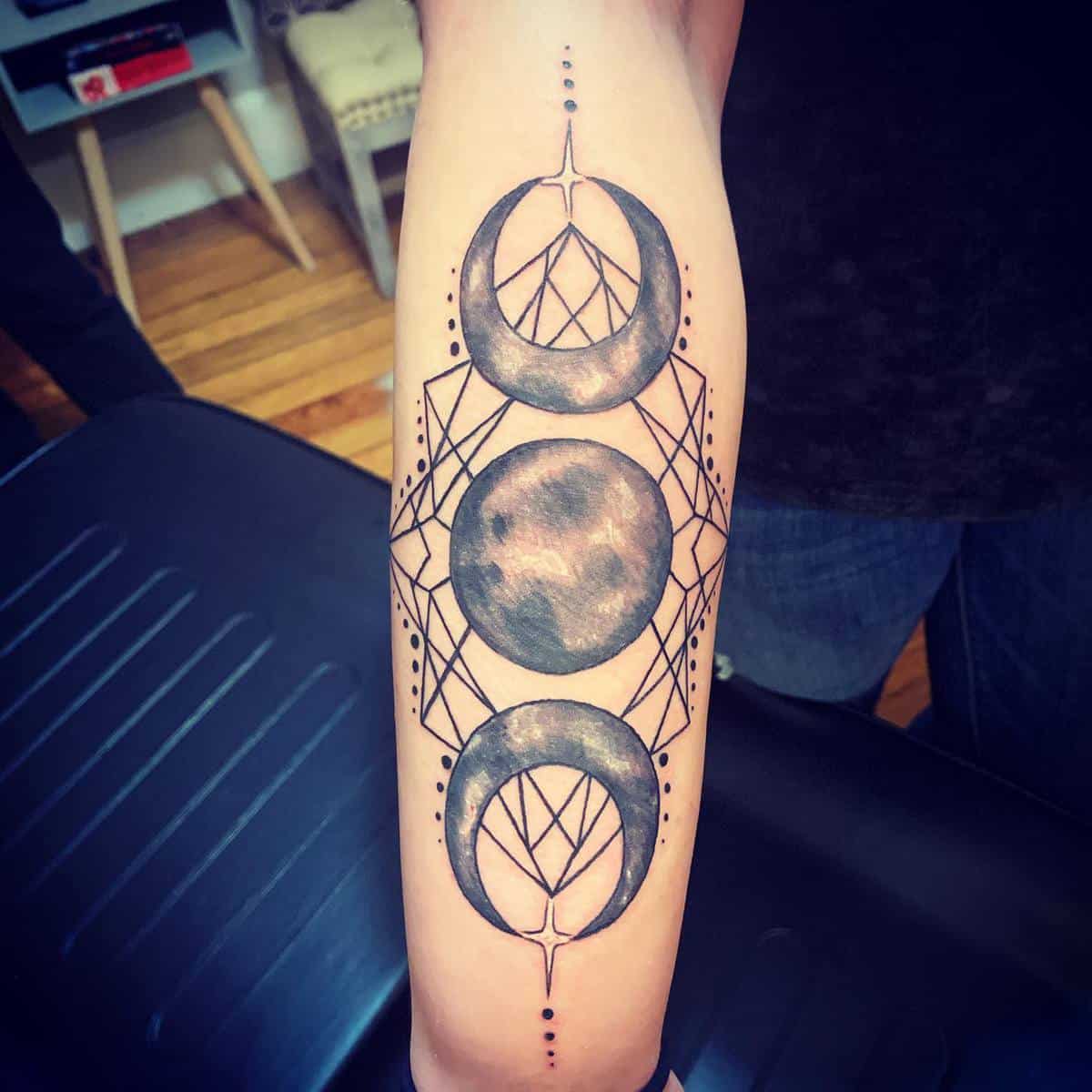 The Moon in Tattoo Style and Application 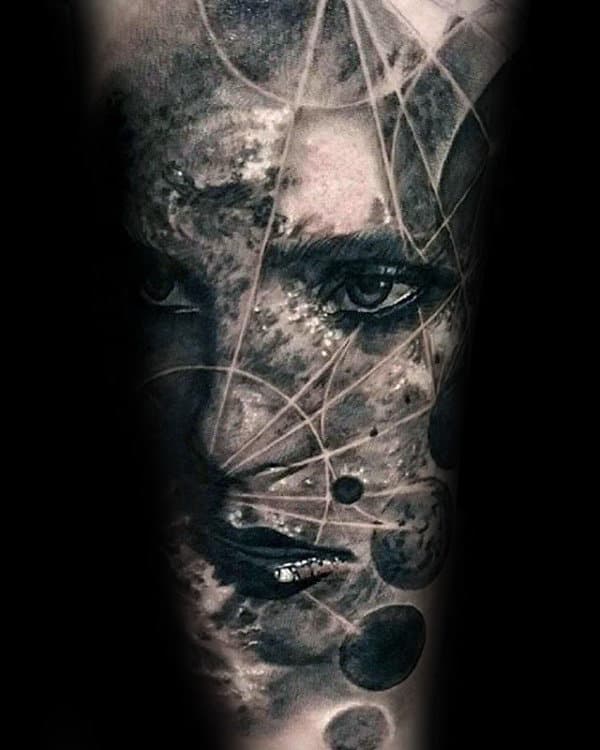 People have come up with a variety of ways to wear 3D and geometric tattoos, and the moon is no exception. These designs often turn intricate patterns and multifaceted shapes into some of the most original ink designs through optical tricks, shading, and shape usage.

A successful 3D or geometric moon tattoo is achieved by making the artwork look like it’s a part of your body, or as if it’s hovering over the top of it by magic.

A tattoo artist well versed in creating 3D pieces can create your piece through the application of line work, shading, color, and space manipulation to literally add that extra dimension needed to make it come alive. 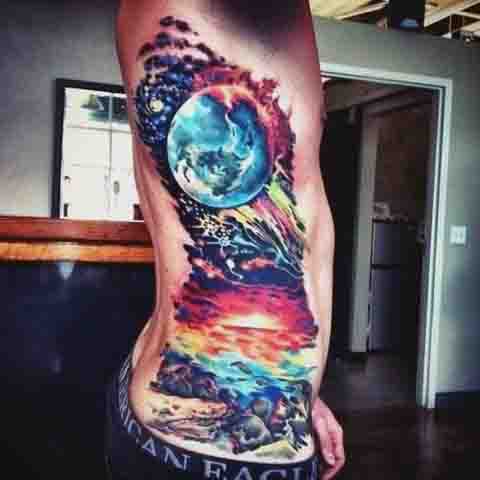 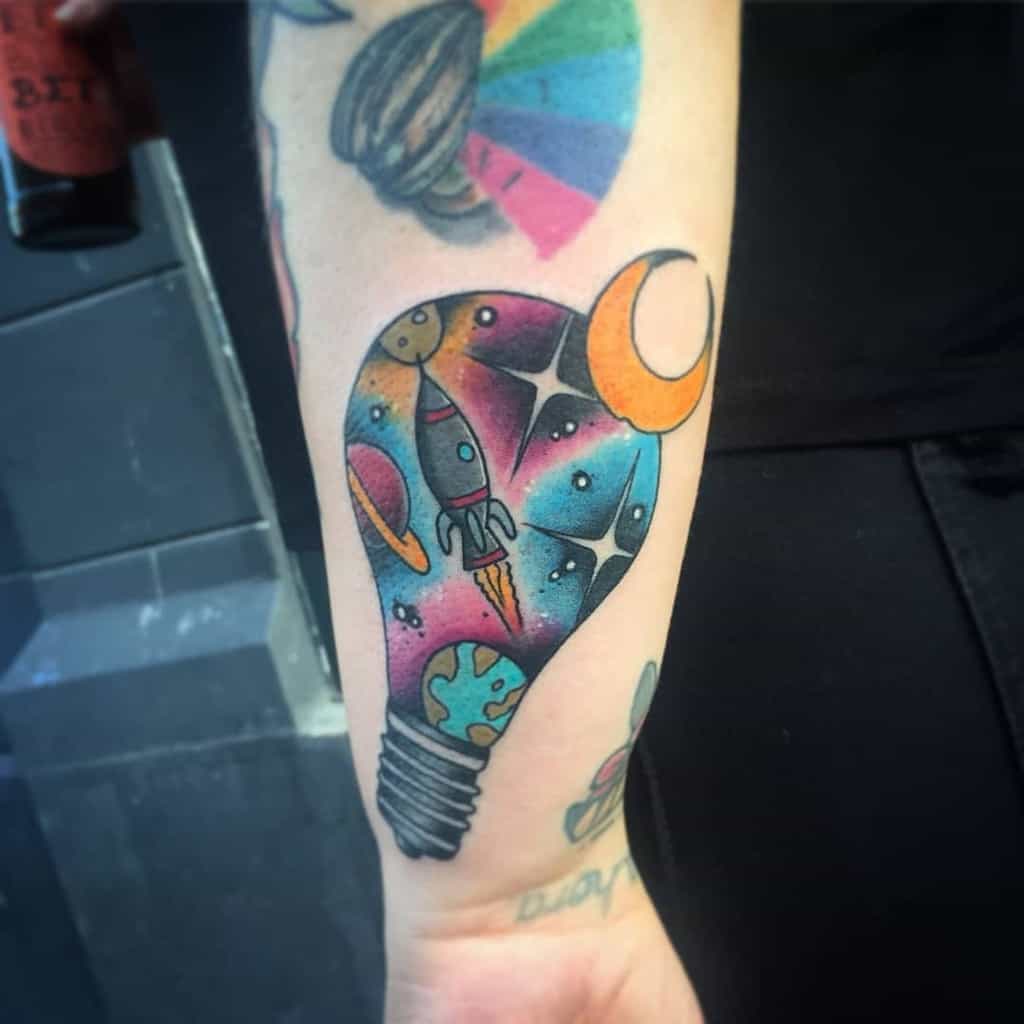 Neo-traditional moon tattoo ideas take old-school concepts of color and shape delivery but produce finished designs that are richer in color, combined with modern technical approaches to bring a piece to life.

This development can be done with bright colors and effects or through the use of different linework and shade techniques on black or grayscale tattoo designs.

A quality tattoo artist can take a simple direction from the collector and transform the concept into a truly remarkable piece of contemporary body art simply through subtle manipulation of color, shape, shading, and placement. 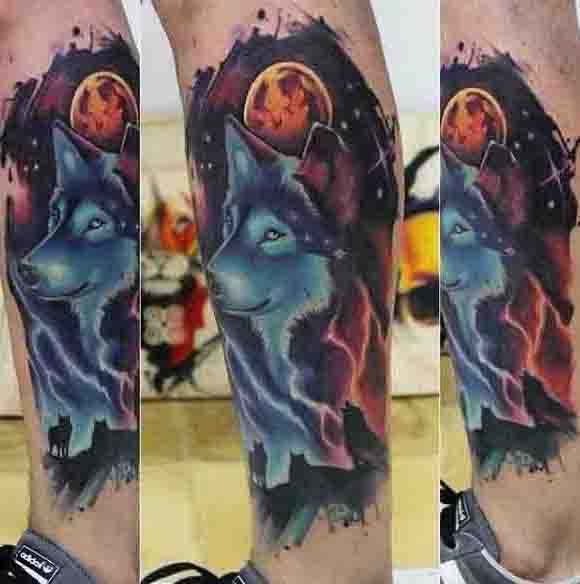 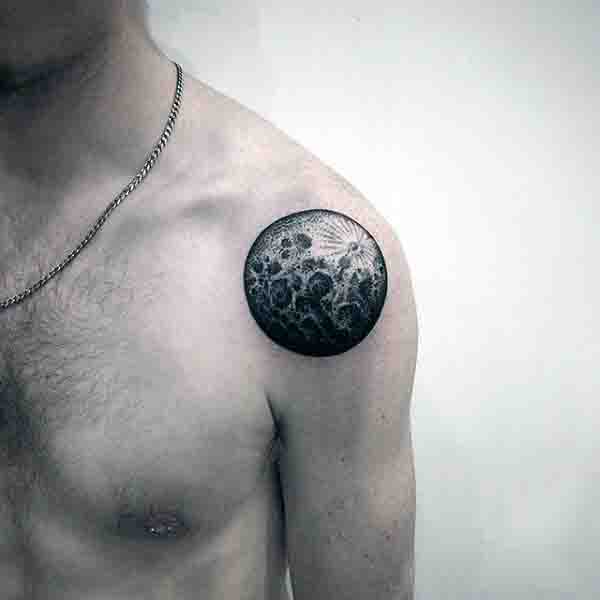 The moon is incredibly versatile as a tattoo symbol. A simple black moon tattoo makes for a popular tattoo choice, as they can be placed practically anywhere while being inked cheaply.

The moon is considered a feminine symbol; it is our symbolic mother, working with the sun to keep the earth (and us) on track.

Some moon symbolism is universal – nighttime, nurturing, and the feminine – while also being linked to fertility, birth, and transition.

Depending on the type of small moon tattoo or minimalist design your tattoo artist pairs it with – think of a detailed mandala tattoo or easy one color blue moon tattoo as examples  – the meaning will change to a more personalized viewpoint of the orb’s meaning to you. 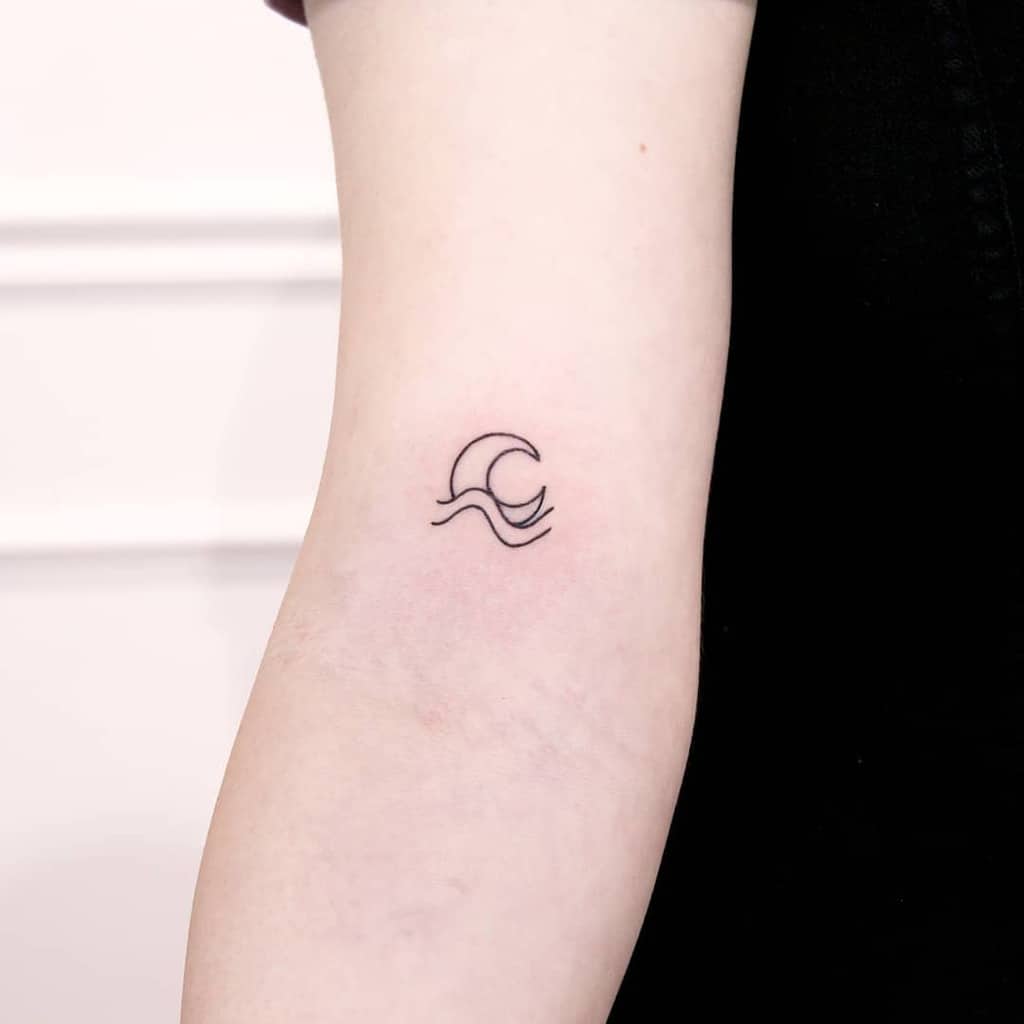 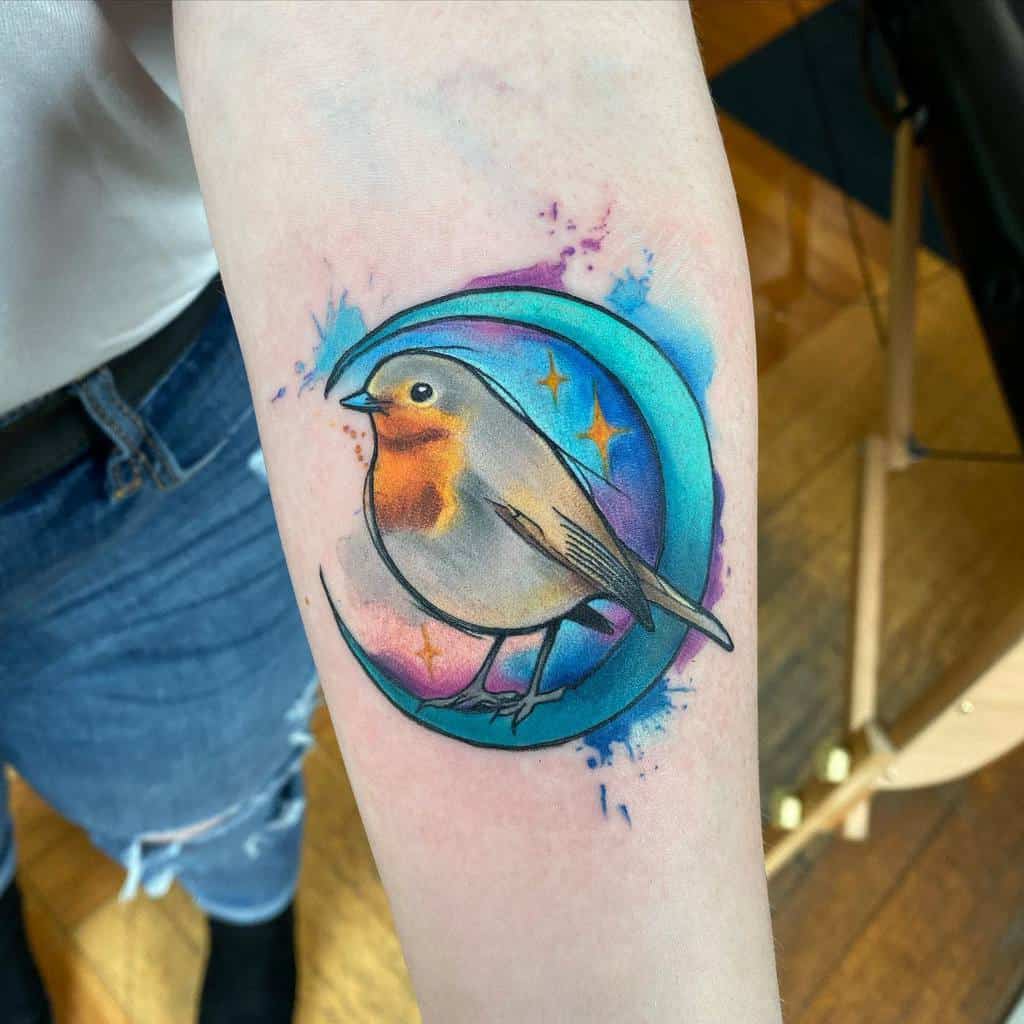 One design trend that continues to gain fans in the tattoo world uses bright colors and a loose application approach to create images reminiscent of watercolor paintings.

A watercolor tattoo looks great optically around a stylized crescent moon tattoo, or provides contrast within geometric tattoo ideas such as sun and moon or moon and stars tattoo designs. 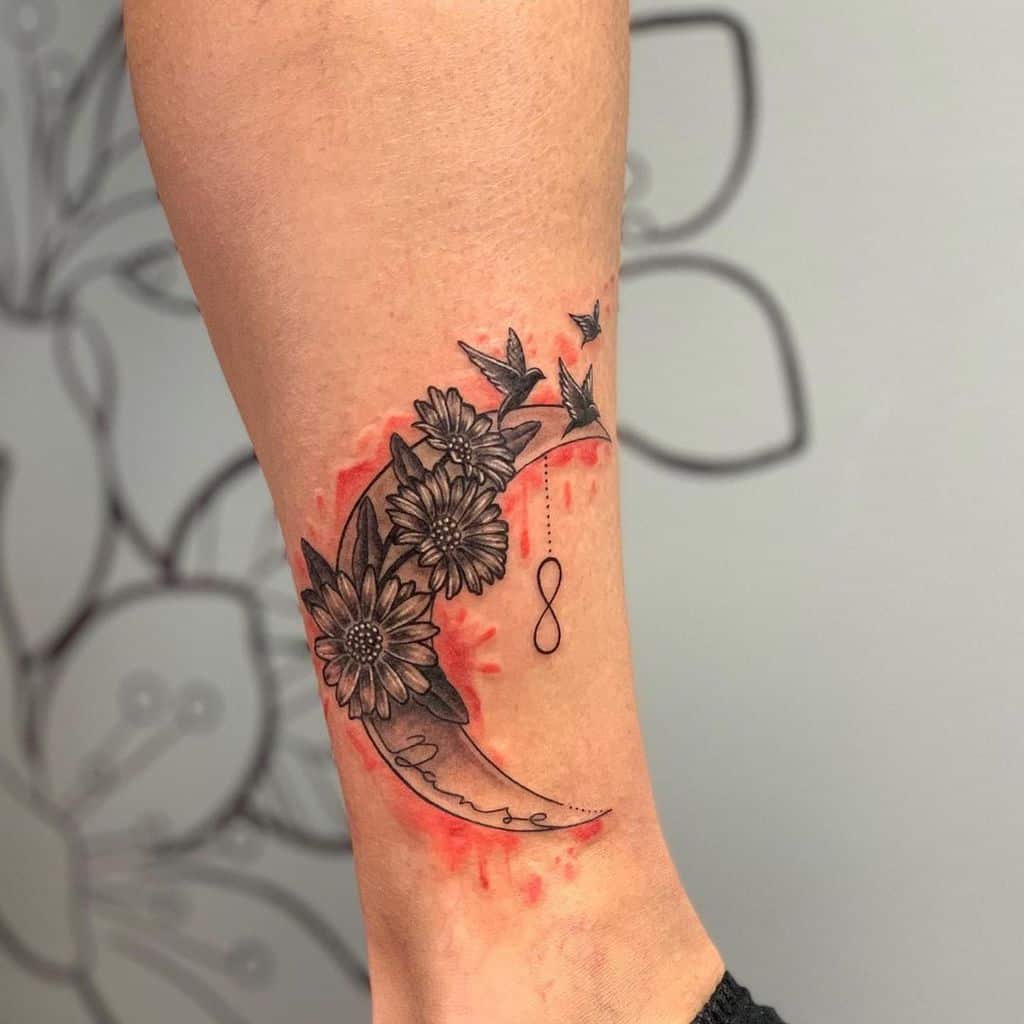 The moon is a universal symbol not just for tattoos and art, but for cultures and religions worldwide.

By exploring the many different moon tattoo themes, you will be able to figure out the perfect body art piece to bear on your skin permanently.