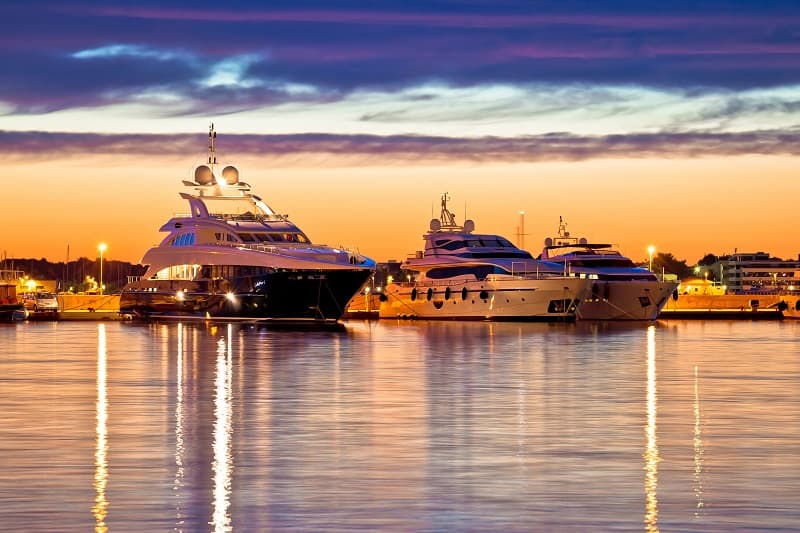 10 Of the Most Expensive and Luxurious Celebrity Yachts

Celebrities aren’t just known for their spectacularly expensive and luxurious houses. They’re also known for their many exquisite and exorbitantly priced toys. When you’re a celebrity, you have a unique lifestyle that comes with many perks and big paychecks.

With more money than they feasibly know what to do with, many celebrities have embraced a love for travel and the ocean. What’s a better way to embrace both than to set sail on a luxurious, privately owned yacht?

Luxury yachts come in a variety of different sizes and styles and are kitted out according to the wants and needs of their owners. With their large budgets, celebrities have been known to have some incredible features and amenities onboard their yachts. We may never have the opportunity to own one of these million and multimillion-dollar yachts, but we can live vicariously by learning as much as we can about them.

In this list, we’re going to look at 10 of the most expensive and most luxurious celebrity yachts. Continue reading if you want to explore these beautiful water homes and learn more about what makes them truly exceptional. 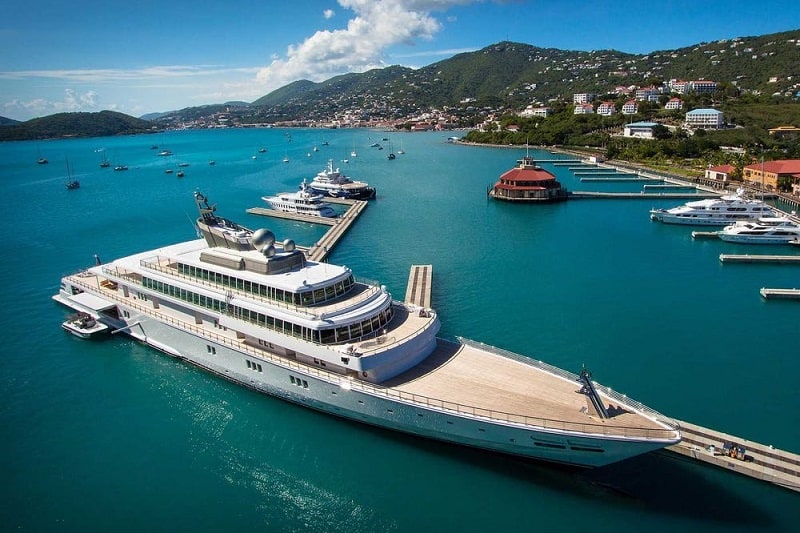 The Rising Sun is an uber-luxury yacht that the late legendary Jon Bannenberg designed. Originally this superyacht was bought by Larry Ellison, the CEO of Oracle Corporation, but it’s now owned by American philanthropist and owner of Geffen Records, David Geffen.

This celebrity yacht is one of the most expensive in the world, with a price tag of $590 million. The Rising Sun is approximately 452 feet long and was built by the renowned German mastership company Lurssen.

There’s no doubt this vessel is spectacular, as can be attested by the many celebrities that have frequented it over the years. The Rising Sun has an incredible 82 rooms.

There are nine cabins with a master suite and eight double cabins. This yacht is capable of carrying up to 45 crew onboard and can accommodate 18 guests overnight. Some of the notable features of the Rising Sun include a beautiful state-of-the-art kitchen, a gym, a basketball court, an onboard movie theatre, and a wine cellar. 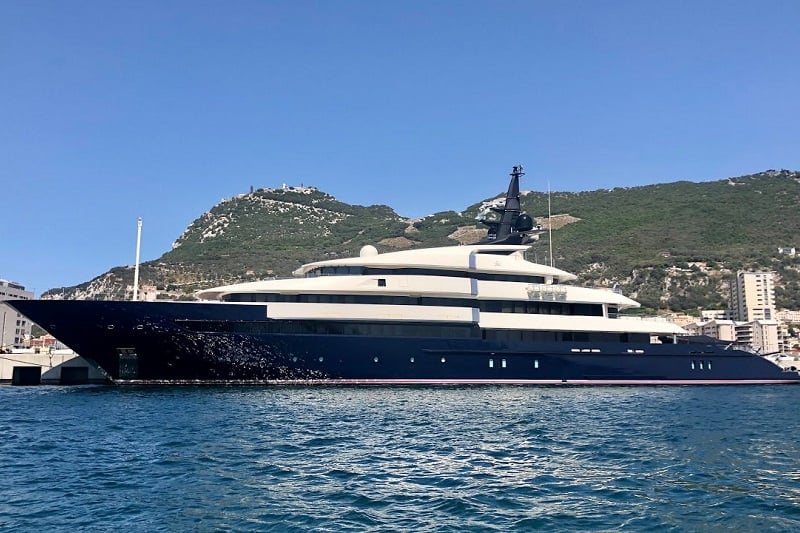 One of the most expensive boats in the world owned by a major celebrity available for charter is the Seven Seas. Interestingly, this yacht is owned by legendary film personality Steven Spielberg who is well known for directing some of the best contemporary films. The 282 foot long Seven Seas superyacht was built by the Dutch shipping company Oceano and is estimated to have a price of $200 million.

The Seven Seas has enough cabins to accommodate 12 guests and 26 crew members, and best of all, each of these cabins is designed to be comfortable and luxurious. There is a large master suite that has its own study, deck, and private jacuzzi.

The entire yacht has a classically elegant interior style as it was decorated by the renowned design firm Nuvolari Lenard. Throughout the vessel are rosewood, walnut, and teak textures.

Those wanting to charter the Seven Seas can expect to pay approximately $1 million for a week-long journey. However, this price point is well within reason when you consider the features and amenities on offer.

The Seven Seas has a fully equipped gymnasium, two cinemas, a helipad, a massage room, and a spa. There are also two custom onboard tenders. One is a 34 foot limousine boat, while the other is a 30 foot open sports boat. 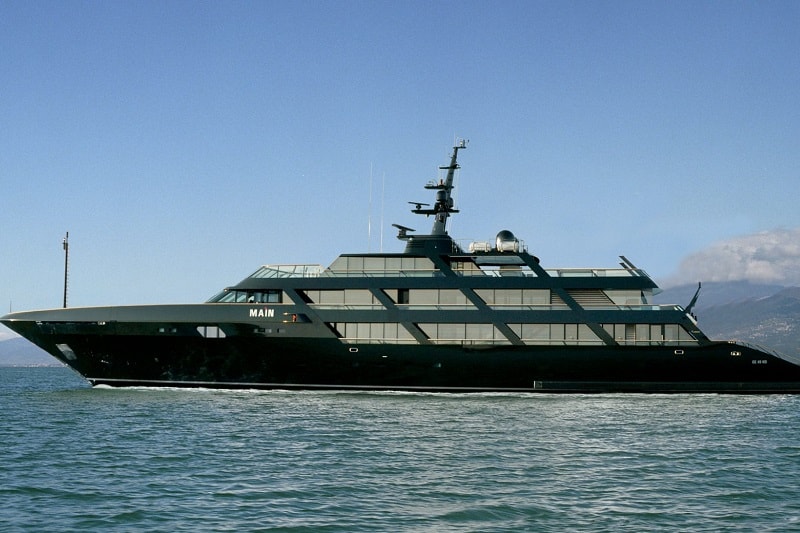 Not every celebrity is hands-on when it comes to designing their beloved yachts. This isn’t the case for famed fashion designer Georgio Armani.

For years Armani contemplated building a boat, but he held off on purchasing or building one as he wanted a yacht that would be unique. With a vision in place, Armani worked with yacht manufacturer Codecasa to build a luxurious dark green yacht that took 30 months to complete and has an estimated price of $76 million.

Armani’s yacht is called Main, and it is approximately 213 feet long. It is believed the vessel is colored dark green so that it’s camouflaged at sea. The Main can accommodate 14 crew and 12 guests in 7 luxury cabins. Interestingly the blinds and windows were designed by Armani himself.

Additionally, the furniture in the yacht is created by Armani’s Italian fashion brand. The minimalistic style and unique interior color scheme allow a panoramic view of the interior, allowing guests an unobstructed view of the luxury that surrounds them. Moreover, guests often enjoy the various features and amenities on this yacht, including a gym, whirlpool, cinema room, and marble bathrooms. 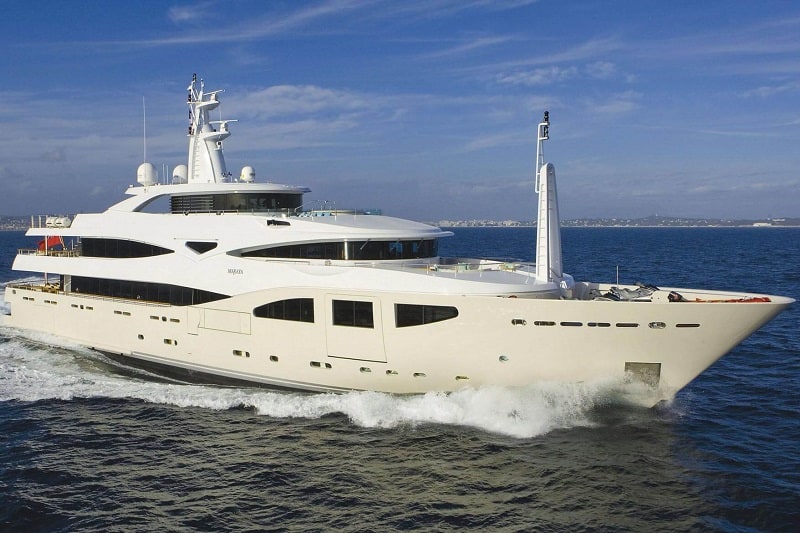 Notable philanthropist and platinum-selling artist Puff Daddy is the proud owner of one of the most innovative yachts. Maraya was built by the pioneering Italian superyacht construction company CRN Yachts, who collaborated with Claude Missir Architecture and the Zuccon International project. It’s believed that the 177 foot long Maraya is worth a whopping $65 million.

The Maraya offers the latest nautical innovation, paired with a lush and elegant Italian exterior and interior design. There is guest accommodation for 12 people in six luxury suites that each have a double master suite.

A VIP double suite is located on the upper deck, and two VIP suites are located on the lower deck of this yacht. Additionally, the master suite is incredibly lavish and comfortable, with its own private balcony that can be lowered when the ship is anchored.

With nearly 5,500 square feet of space, there is more than enough room for guests to laze about. The Maraya offers five decks that each have their own entertainment options. Additionally, the entire top deck is known as the “Party floor” and is similar to a nightclub. This deck has its own bar, stage for performers, and projector screen.

If you own a yacht, it stands to reason you’ll have it equipped with water toys. Some of the notable water toys on the Maraya include a ski boat and a few radio-controlled miniature yachts. 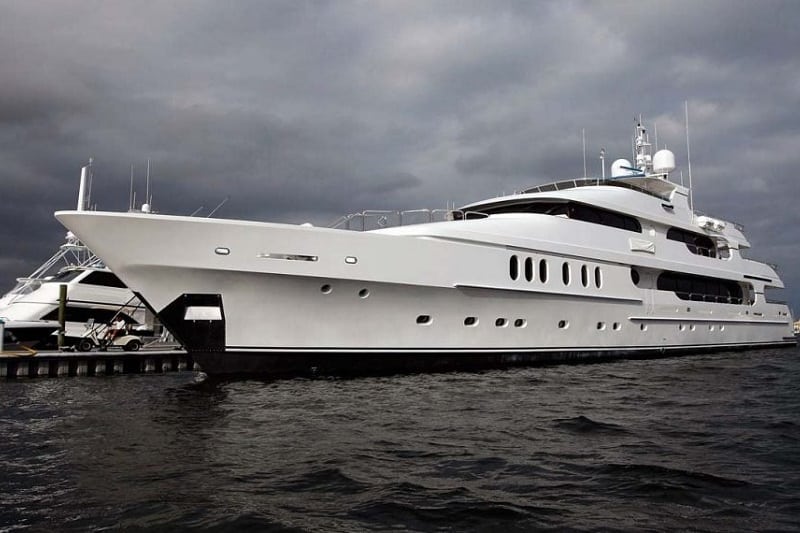 Tiger woods is certainly one of the most well-known golfing sports celebrities in the world, so, unsurprisingly, he has one of the most expensive and luxurious yachts. Even though his sporting career has died down, he still nets approximately $6 million a year, which is rather impressive.

Over the years, Wood’s has spent millions on expensive homes and toys, but one of his most costly purchases is his yacht called Privacy. The Privacy yacht is believed to be worth $20 million.

This 155 foot long yacht has five bedrooms that can accommodate 10 guests. There are also four separate rooms for the boat’s crew. Each of the cabins on the Privacy has been meticulously designed to provide luxury to its occupants. Additionally, this yacht has an operating range of 4,000 nautical miles.

A few of the incredible features and amenities on the Privacy include an observation deck and a jacuzzi that can accommodate eight people. Moreover, there is a fully equipped gym, a decompression chamber for scuba divers, and three jet skis. 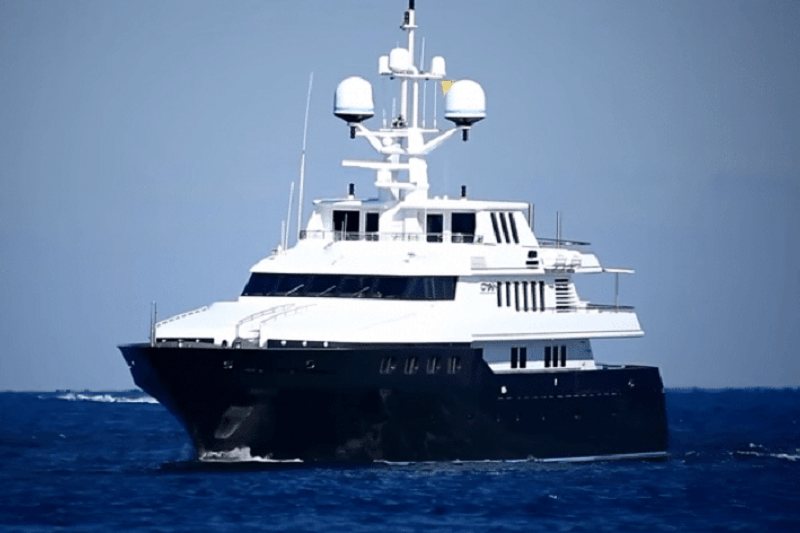 The Cyan is a luxury yacht fit for a rockstar, and it is, in fact, owned by one. The Cyan is a $20 million 141 foot long expertly crafted boat that was built by the highly respected shipbuilding company Codecasa and is owned by legendary musician Bono.

This yacht can accommodate 12 guests in six spacious and luxurious cabins. Each cabin has its own plasma TV and satellite TV. Additionally, this boat is designed to last with quality oak and mahogany lining.

The Cyan is built for relaxation with its numerous superb features. There are decks with sun pads and al fresco dining, a bar on the bridge deck, and an elegant dining saloon on the main deck.

Moreover, the Cyan is also equipped with a swimming pool, an outdoor cinema with a nine foot and three inch widescreen, a jacuzzi, and a storage area that houses many outdoor toys. Some of the notable outdoor toys include seabobs, fishing equipment, snorkeling gear, wave runners, and a kitesurfer. 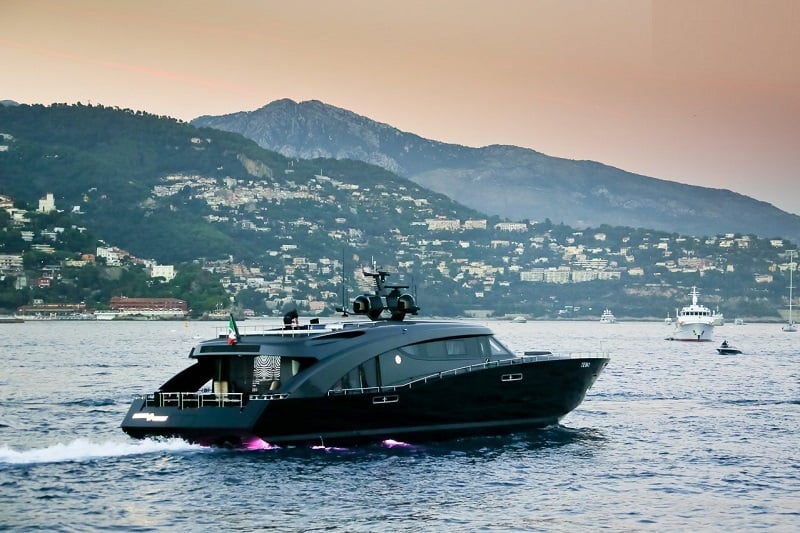 One of the most eccentrically designed yachts on our list goes to the Freedom, which acclaimed fashion designer Robert Cavalli owns. Despite its somewhat outrageous interior appearance, it was a finalist in the Best Exterior Styling and Best General Arrangement categories at the prestigious 2019 Boat International Design and Innovation Awards.

Its gorgeous interior design was completed by Tommaso Spadolini, while it was custom built by CCN according to the specifications of Cavalli. The Freedom is worth approximately $15 million, making it exorbitantly expensive considering it is one of the smaller celebrity yachts.

This yacht is only 92 feet long, making it cozy, but that doesn’t mean it isn’t luxurious. There is a master suite with a gorgeous skylight and two guest cabins that can accommodate four people.

Each of the guest cabins features customized furniture from Cavalli’s private home collection. The entire yacht is decorated with a colorful mix of animal prints and metalwork features, giving the Freedom a very glam chic appearance. 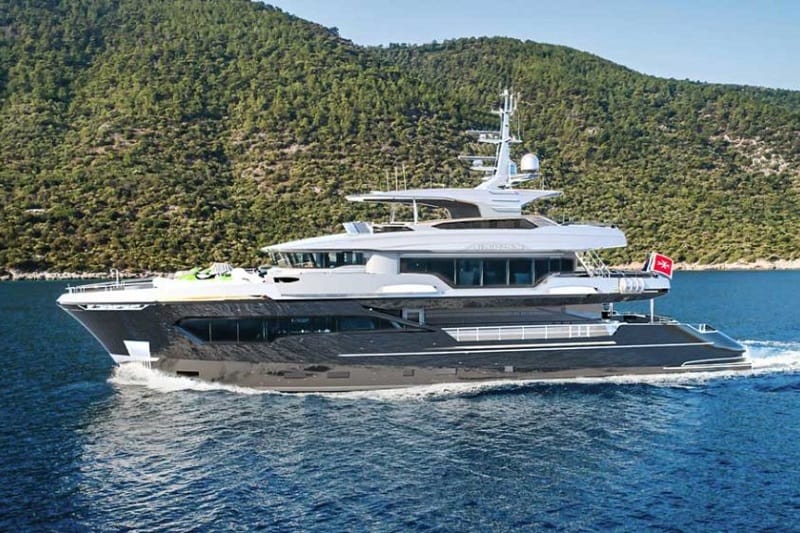 The Infinity Nine is a newly constructed luxury yacht with an exorbitant $9.2 million price tag. This yacht was built in 2020 and is in its final stages of completion. The Infinity Nine was commissioned by legendary NBA sportsman Tony Parker and designed and engineered by the AvA Yachts. Incredibly this four-decked superyacht has a 6,500 nautical mile range, Volvo Penta diesel engines, fin stabilizers, bow thrusters, and advanced electronics.

The beautiful Infinity Nine has five cabins that can sleep up to 10 guests. Inside the master suite, there are plenty of luxury furnishings and full-height windows that allow for unobstructed views. Additionally, some of the known amenities are impressive.

It’s believed this yacht has an extended swim platform near the stern, a fully equipped world-class gym on the upper deck, and stylish yet radical interior design touches. Moreover, the vessel is said to have a top speed of 14 knots with a cruising speed of 12 knots. 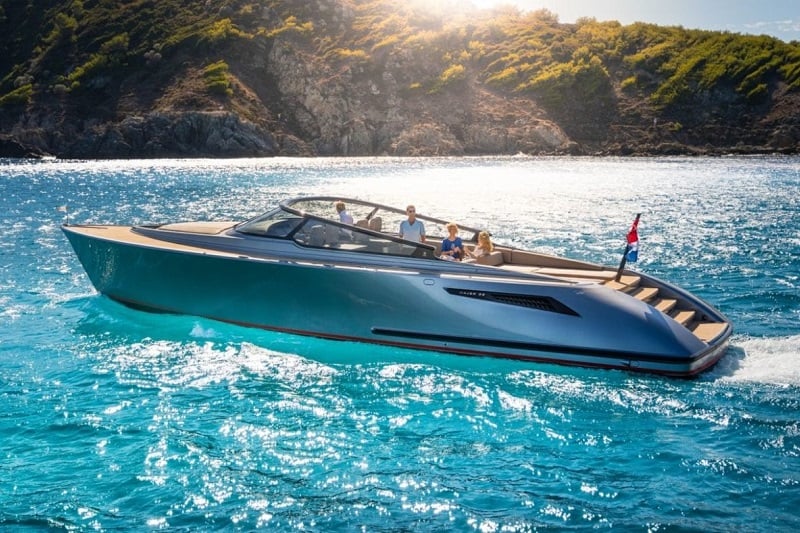 One of the fastest luxury yachts on our list belongs to sporting superstar Tom Brady. His yacht called Viva a Vida is believed to have a top speed of over 40 knots. Interestingly, Brady named the boat Viva a Vida in honor of his supermodel wife’s charity. For an estimated $7 million price, there are a few notable features and amenities that help this yacht stand out.

The Viva a Vida has three Volvo Penta engines as well as joystick driving. There is a helm station that is covered by a hardtop, and there is an open rear deck. Additionally, one of the most innovative features is the push button fenders. These fenders will automatically deploy to protect the yacht when it is in a marina. Another cool feature on this yacht is an extendable swim platform that transforms into a gangway.

Although this yacht might be on the smaller side, it has enough cabins that it can comfortably sleep between four to five people. The Viva a Vida has a fully equipped kitchen that includes a fridge, stove, and dishwasher. There is also a full bathroom fitted with a convenient shower, and there is a master suite. 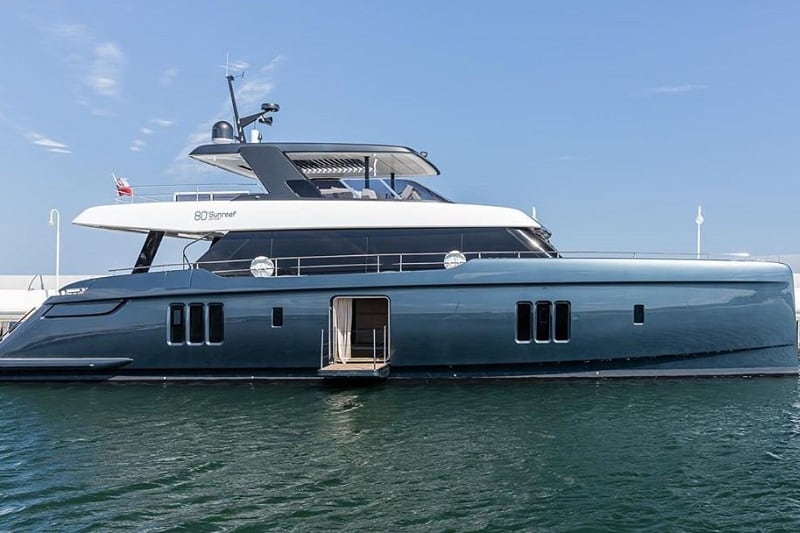 The Great White yacht owned by tennis legend Rafael Nadal might not be as big as other celebrity yachts, but it’s no less impressive. This compact superyacht has a length of 80 feet and is crammed with luxuriously modern furnishings and technological gadgets. It’s believed the Great White cost Nadal an estimated $6.2 million, which he believes was well worth it.

This semi-custom-built yacht has almost 4,000 square feet of interior living space and three cabins that can comfortably sleep, eight guests. An absolutely gorgeous stateroom features a flip-down ceiling television that settles above the bed, a private fold-out balcony, and a walk-in wardrobe.

A few of the features and amenities worth mentioning that are present in the Great White include a contemporary furnished saloon with an eight-seater dining room table and a living room with two 77 inch televisions installed back to back. This yacht also has a full-beamed alfresco dining outdoor space, a wide hydraulic swim platform, a weatherproof TV at the stern, and a garage housing outdoor toys.

See more about - 10 Of The Most Expensive Celebrity Homes