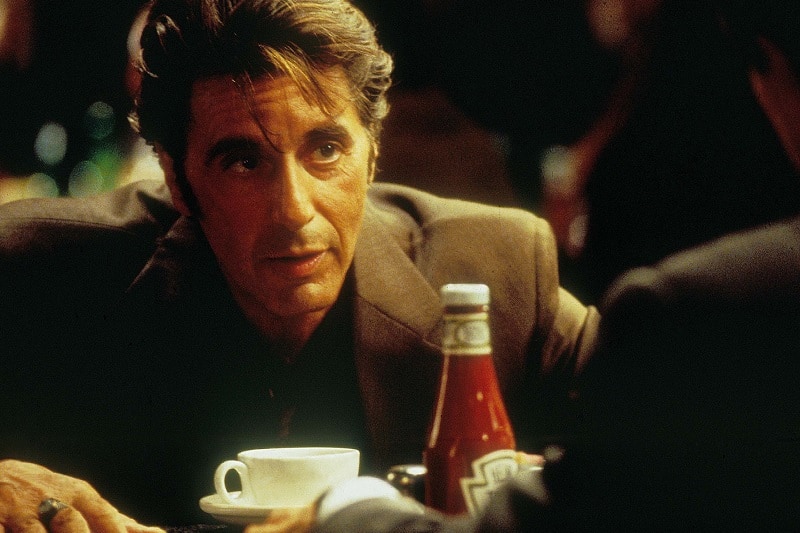 The 11 Best Al Pacino Movies of All Time

Al Pacino has been one of Hollywood’s most popular and most successful actors for decades, proving with each new project (minus Jack and Jill, because not even Pacino could save that dumpster fire) that he remains at the top of his game. Pacino’s impressive filmography includes countless classics, so we’ve put them all together for you to enjoy.

Check out our list of the 11 best Al Pacino movies of all time.

One of the greatest crime dramas of all time, Heat is Michael Mann’s masterpiece. Mann, who previously directed/co-wrote The Last of the Mohicans, originally developed the story for this film in the 80s as a (failed) TV pilot, L.A. Takedown, before retooling his story into Heat years later.

Heat is memorable for its opposing character-driven dramas, with Pacino starring as tired veteran LAPD officer Vincent Hanna who’s chasing Robert De Niro’s (Taxi Driver) career thief Neil McCauley (and don’t forget about Tombstone star Val Kilmer, who also puts his mark on the film). As Pacino pursues De Niro, their paths rarely cross, (they only have one real “coffee shop” scene together), but it’s remarkably memorable when they do.

Heat is one of those films you just have to see if you call yourself a movie buff. It’s a pulse-pounding slow-burn (emphasis on slow), but one that pays off in the end.

A recurring series on our movie lists, The Godfather Trilogy was directed and co-written by Francis Ford Coppola along with Mario Puzzo, who also wrote the novel on which the film is based. The original stars heavy-hitters Marlon Brando (Superman), James Caan (Elf), Robert Duvall (The Judge), Diane Keaton (Let Him Go), and Pacino.

Pacino’s Michael Corleone takes the lead as he guides us through New York City’s Italian Mafia scene, starting in the 1940s and progressing through to the 1980s. The series chronicles Michael’s initial reluctance to follow in his father’s footsteps as the head of the “family business” all the way through his descent into “villainy” and… Well, let’s not ruin the story.

The Godfather Trilogy has been hailed as one of the greatest film trilogies of all time (though Part III is often heavily criticized) and is hands-down some of Pacino’s best, and most important, work.

Directed by critically acclaimed filmmaker Sidney Lumet (The Verdict), Dog Day Afternoon is another Pacino starring crime drama film, this time based on real-life events. The film follows Pacino’s Sonny Wortzik (based on real-life bank robber John Wojtowicz) as he leads a robbery/hostage situation to pay for his lover’s sex-reassignment surgery.

The film’s cast was selected carefully by Lumet and Pacino, with Pacino casting various co-stars from his past Off-Broadway plays, including John Cazale (The Godfather), Charles Durning (The Sting), Chris Sarandon (The Princess Bride), and Lance Henriksen (Millennium). The stellar performances, Pacino included, bring to life this semi-biographical tale in a way that makes it stand out as one of Pacino’s best.

Maybe Pacino’s most famous role, Scarface (itself a remake of the 1932 film of the same name) is iconic. Written by Oliver Stone of Snowden and J.F.K. fame and directed by crime film legend Brian De Palma (The Untouchables), Scarface takes a story, originally inspired by Chicago criminal Al Capone, and makes it its own.

Set in Miami, Cuban refugee Tony Montana climbs up the criminal ranks and eventually becomes a wealthy drug dealer. It’s a tragic story that shows the life of a struggling refugee who is dragged into a life of crime, tearing both himself and his family apart. What makes Scarface memorable is Pacino’s unhinged performance as Montana, who slowly loses himself in a haze of cocaine as the film spirals towards its climax.

Scarface, and Tony’s “little friend,” is one of the most referenced, quoted, and memorable crime films out there, so if you’re into that sort of thing, or just like Al Pacino, this is the film for you!

Another Brian De Palma picture, this one based on two Judge Edwin Torres novels, Carlito’s Way stars Al Pacino as career criminal (a recurring theme on Pacino’s filmography) Carlito Brigante. Recently out of jail on a technicality, he attempts to leave the life that put him in prison behind, but as is often the case, gets dragged back into the criminal underworld. Alongside Pacino, Sean Penn (The Game) co-stars as his close friend and lawyer David Kleinfeld.

While many gangster films are about the gangster working to get out or retire from life, none compare to Carlito’s tumultuous journey here. Throughout the film, Carlito, called “Charlie” by girlfriend Gail (Penelope Ann Miller, Adventures in Babysitting), works hard to escape his destiny and remove himself entirely from his life of crime.

It’s an exciting feature with lots of drama and suspense to keep you invested along the way. Carlito’s Way may not have been well-received critically at the time, but it has since amassed a strong cult following and is widely regarded as a lost gem in Pacino’s filmography.

See more about - The 13 Best Gangster Movies of All Time

Another biographical-crime film by Sidney Lumet, Serpico stars Pacino (obviously), this time as real-life New York cop Frank Serpico, who became disillusioned with the NYPD and instead worked as a whistleblower to take down the corruption from within. His efforts eventually led to an investigation led by the Knapp Commission.

While not as well-known as Heat or The Godfather, Pacino still brings his A-game to the role of NYPD Officer Serpico in a way that only he can. Serpico is sent through the wringer by his fellow officers and superiors, who bully and belittle him nearly his entire time on the force.

He witnesses and experiences police brutality first-hand, forcing him to make a choice to do something about it rather than stay silent. Serpico is a timely picture that reminds us about the unjust abuses of power, while also giving us hope that we can stand up in the midst of it anyway.

Master playwright and screenwriter David Mamet (The Unit) adapted his Pulitzer Prize-winning play of the same name into this drama about four salesmen who are put on edge after a corporate trainer is sent to motivate them, proclaiming that two of them will be fired, and only the “top two” will remain.

The film stars some real heavy-hitters (you know, besides Pacino) such as Jack Lemmon (The Odd Couple), Alec Baldwin (30 Rock), Alan Arkin (Argo), Ed Harris (Apollo 13), and Kevin Spacey (House of Cards), that really help sell this as being both witty and (as one critic would call it) one of the “quintessential modern movies about masculinity.” Glengarry Glen Ross includes “one of the best American casts ever assembled” and must be seen to be believed.

The only sports drama on this list, Oliver Stone’s Any Given Sunday follows the fictional football team, the Miami Sharks, and their head coach Tony D’Amato (Pacino) as they fight to win (or lose) on “any given Sunday.”

If football movies are your thing, then this is a must-watch for you. Right up there with films like We Are Marshall, When The Game Stands Tall, and Field of Dreams, Any Given Sunday is about the power of brotherhood, unwinnable odds, and even overcoming one’s own self-centered nature.

The film features a great ensemble cast that includes Cameron Diaz (Shrek), Jamie Foxx (Just Mercy), James Woods (True Crime), and Dennis Quaid (The Rookie). Any Given Sunday feels like anything but, with lots of tackles and blow-outs along the way that prove that life is a contact sport.

Pacino and Johnny Depp (Pirates of the Caribbean) team up in this crime drama based on FBI agent Joseph D. Pistone’s time undercover as Donnie Brasco. Depp co-stars as the undercover FBI agent while Pacino takes the lead as hitman Lefty Ruggiero as they plow through the streets of 1970s New York.

As the film progresses, “Donnie” slowly descends deeper and deeper into the Mafia, only to realize that he might like crossing the line between law enforcer and career criminal. Meanwhile, he’s slowly setting up Lefty to not only take the fall but is also leading him into certain death.

The pair’s relationship is the clear driving force of the film that will keep you invested throughout. Donnie Brasco is an absorbing and gripping drama with two of the most bankable stars of its era.

God help Bobby and Helen. The Panic in Needle Park is Pacino’s second-ever role and one of his most impacting. Bobby (Pacino) and Helen (Kitty Winn, The Exorcist)  are heroin addicts who hang out in “Needle Park” together after becoming romantically involved.

As the film continues, Bobby’s hustling and Helen’s addictions overcome them, leading to one betrayal after another. This is definitely not the happiest, funniest, or even exciting film on this list, but it’s one of Pacino’s most gut-wrenching performances that will most certainly keep you from any needle parks in your area. The Panic in Needle Park is a heart-tugging drama that pushes boundaries, while still managing to feel all so real.

One of Christopher Nolan’s first American productions (between Memento and Batman Begins), Insomnia stars Pacino as an LAPD detective on loan to Nightmute, Alaska, along with his partner (played by Martin Donovan, Trust) to help with a homicide case. It also features Hillary Swank (Million Dollar Baby) and Robin Williams (Good Will Hunting) in a strictly dramatic role.

As the title suggests, Pacino’s Detective Wil Dormer suffers from insomnia, partly because of the things he’s seen and done as an LA cop, and the constant day of Nightmute doesn’t seem to be helping. Although this might not be one of Nolan’s most well-known films, it still holds its own as a psychological thriller that gets your blood pumping and pulse-pounding. Insomnia is most notable for its excellent cast, tight script, and clever direction that will keep you guessing until the end.