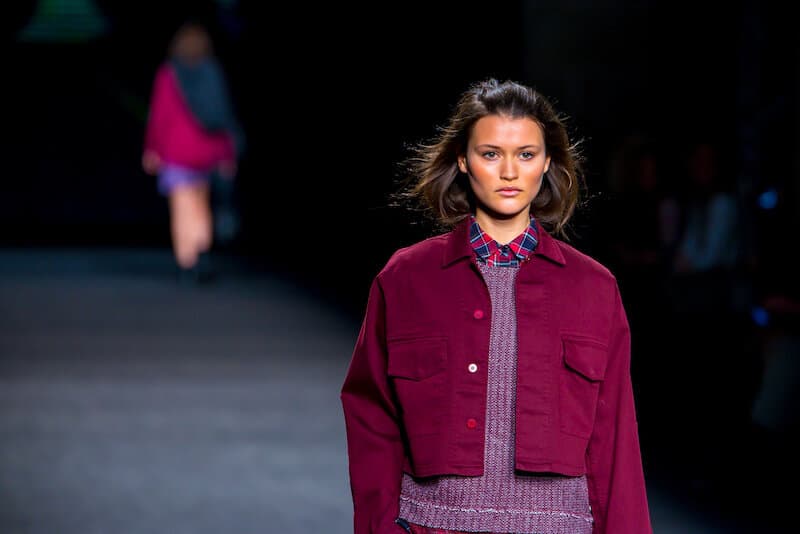 France is known for many things; croissants, the Effiel Tower, red wine, and fashion. Paris is home to its own fashion week (surprisingly called Paris Fashion Week) and has built a reputation as one of the fashion capitals of the world. Not only do the French know their fashion, but they produce some of the most beautiful catwalk models in the world.

French models rival those from any country with their European sensibility and attractive looks. Ever since the days of Carla Bruni, Vanessa Paradis, Laetitia Casta, Brigitte Bardot, and Ines de la Fressange, French models have been sought after to model for some of the biggest brands in the world.

This continues today, with the new breed of French models appearing on magazine covers and on runways around the world. To celebrate these gorgeous women, here are 15 of the top French models out there getting it done.

French model Camille Rowe caused a stir in 2016 when she appeared on the cover of Playboy magazine. Unfazed by the controversy, Rowe continues to land mega brand endorsements and appears in fashion shows around the world.

Born to an American mom and a French dad, Rowe split her youth between France and America, eventually following in the footsteps of her mother, who is also a model. Like many young models, Rowe was spotted by a talent scout while at a cafe and quickly became the face of Chloe in 2008.

Since then she’s gone on to model for Louis Vuitton, Abercrombie & Fitch, Tommy Hilfiger, Ralph Lauren, and Adidas Originals. Rowe has also appeared on several Vogue covers and even tried her hand at acting, with her last role coming in the 2021 horror The Deep House. She’s one of the most popular French models in the world.

Born in Lile, France, Constance Jablonski got her start after entering the French Elite Model Look Contest of 2006. While she didn’t win, she found herself inundated with modeling offers. Jablonski made her catwalk debut in September 2008 and quickly became a big star in the modeling world.

As well as modeling, Jablonski is part of French Bloom, an alcohol-free French Bubbly made with fine organic grapes.

Thylane Blondeau began modeling at the age of four and has been a mainstay in the fashion industry for the past 15 years. Despite her longevity, Blondeau has only just hit her 20s, meaning she has much more to achieve in her career.

Standing 5’7, Blondeau’s first big gig was modeling for Lacoste before she became the youngest international brand ambassador for L’Oreal. She has gone on to have tremendous success, modeling for designers Dolce & Gabbana, L’Oreal, and Versace while also starting her own clothing brand, Heaven May, in 2018.

With over five million followers on Instagram, she joins the long list of French fashion influencers making their mark in the world.

Model Louise Follain has a very French look with her brown bangs and angelic features. While her style has been described as everything from bohemian chic to vintage, Follain has her own thoughts as expressed in an interview with Lovers and Drifters.

“I never know how to answer that (laughs),” Follain said. “Experimental? But always feminine. I always like to try new stuff. Fashion is made to have fun! I do have some obsessions though, like striped stuff and vintage jackets.”

Scouted not long after graduating high school, Ophélie Guillermand was quickly on a plane heading for New York to start her modeling career. The ski lover has featured in campaigns for the likes of Prada, Fendi, Chanel, Tommy Hilfiger, and Laura Mercier and featured on the cover of Vogue Italia twice.

Guillermand has an elite model look that sets her apart from her peers. Both beautiful and smart with a definite French style, she is well on her way to being one of the greatest French models of all time.

French beauty Sigrid Agren exploded onto the scene after winning the French edition of the Elite Model Look contest in 2006. While she ended up signing with the Paris branch of Elite Model Management, Agren didn’t commit to modeling, instead taking small jobs while finishing her studies.

After graduating in 2008 she began taking on more modeling jobs. Agren has worn many of the top fashion brands, including the likes of Versace, Christian Dior, Ralph Lauren, Armani, Chanel, and Louis Vuitton. She also replaced Kate Moss as the face of Stella McCartney, which is an impressive feat.

Known for her short cropped hair and breathtaking features, Louise de Chevigny is another popular French model in the fashion industry. Represented by multiple agencies across the globe, de Chevigny has a striking look that is hard to forget.

de Chevigny has modeled for the likes of Chanel, Missoni, and Khaite as well as appearing on the cover of Vogue Paris, Marie Claire, and Elle. Having recently turned 30, de Chevigny is still a rather fresh face in the modeling game and has many more years ahead of her.

Adèle Farine was always destined to get into the creative side of life. Her father is a photographer, her mother an architect, and her grandmother a painter. Farine has chosen the path of modeling and is fast becoming one of Paris’ rising stars.

A model, painter, and actress, Farine is doing it all. Spotted on the sidewalk, she began modeling in her late teens and has recently moved to New York to continue her career. Falling on the alternative side of the modeling world, thanks to her love of vintage clothes, long tussled hair, and ever-present Dr. Martins, Farine is sure to be a name you hear more of in the coming years.

Chloé Lecareux is another all-rounder who is making an impact in a variety of creative areas. While best known as a model, she’s also a casting director at V Management and the founder of the swimwear label Bleu de Vous.

Born in Paris, Lecareux was scouted while waiting for a friend at a club at the age of 15. While she quickly became a full-time model and traveled the world, Leacareux has dialed down her modeling work, instead happy to focus on her other projects.

Inspired by the style of the 60s and 70s, Lecareux has achieved much for a 27-year-old and continues to strive for success in all aspects of life.

Tina Kunakey is something else. This stunning model is only 25 but has been wowing fashionistas around the world for several years. As well as her modeling career, Kunakey is best known for being the much younger wife of actor Vincent Cassell. Despite the 30-year age gap, the two seem genuinely in love and often share this on their social media accounts.

Plus-sized model Clémentine Desseaux is proving size doesn’t matter when it comes to modeling. While she should just be called a model without the plus-sized, Desseaux doesn’t seem too bothered by the title. The attractive French model has featured in some of the biggest fashion magazines in the world and walked many famous catwalks at fashion shows in all the major capitals.

As well as being a model, Desseaux is an activist and a staunch supporter of body positivity. She is a great role model to any young woman who wants to make it in the world, no matter how you look.

Listed as “a model, influencer, and beauty queen” by Vogue, Michaëla Thomsen is a stunning blonde bombshell. Born in Nice to a Swedish mother and Danish father, Thomsen has the quintessential Scandinavian look with a hint of French style.

Traveling the world as a model gave Thomsen enough exposure to become an influencer. She has parlayed this success into her own beauty label, Thomsen Beauty. Together with her sister, the brand creates beauty products that are 100% natural, free from chemicals, and made in France.

The face of Chanel Beauty is a model, dancer, and actress originally from the island of Guadeloupe. Mélodie Vaxelaire has an enchanting figure and curly locks that have helped her become one of the best models to come out of France in years.

She and her good friend Louise Follain designed a lipstick for La Bouche Rouge Paris while Vaxelaire is also taking acting classes in hopes of breaking into the entertainment industry.

Although one of the older French models on this list at 31, Gabrielle Caunesil continues to make moves in the fashion world. Along with modeling for some of the big designers, Caunesil also has her own label La Semaine Paris.

Citing her style icons to Vogue, Caunesil said, “By day, a mix between Jane Birkin and Audrey Hepburn. By night, Cher.” With over 1.3 million followers on Instagram, Caunesil’s reach is far and wide.

When it comes to the pure French aesthetic, look no further than Prune Pauchet. The short-haired wonder is exactly what you think of when someone says “French woman.” Known for her love of vintage clothes and lack of makeup, Pauchet is another rising star amongst the ranks of French models whose natural beauty is undeniable.