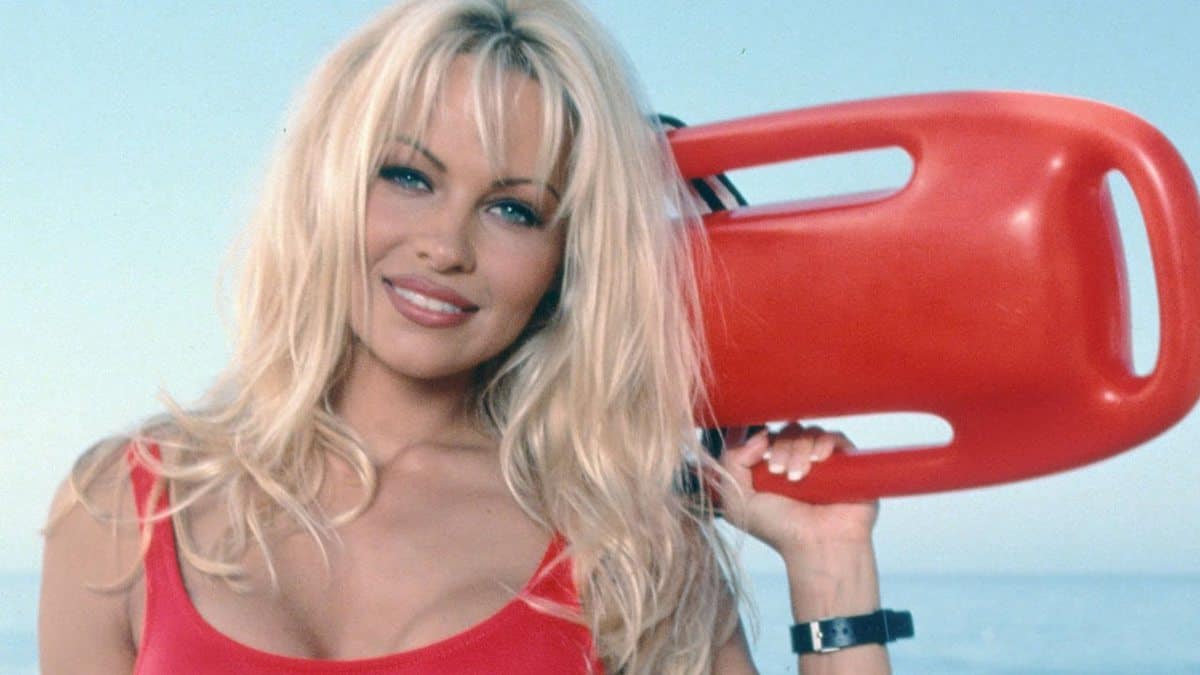 15 Pictures of a Young Pamela Anderson

Pamela Denise Anderson is one of the most gorgeous women in the world. She’s also been back in the news of late after the release of the Disney Plus series Pam & Tommy. This drama series is centered around her marriage to Motley Crue drummer Tommy Lee and their infamous sex tape that was stolen. While heavily fictionalized, both Lily James (as Anderson) and Sebastian Stan (as Lee) are excellent as the leads. Able support is provided by Seth Rogen as Rand Gauthier, the guy who stole the tape, and Nick Offerman as Uncle Miltie.

The release of the series got us thinking about the former Playboy model’s storied career in the entertainment business. First finding fame as a model, the Canadian beauty’s appearance on the cover of the October 1989 edition of Playboy magazine gained her significant attention. This led to a second spread in 1990 before the young Pam Anderson got cast as the ‘Tool Time Girl’ on hit comedy Home Improvement.

Things really took off when Anderson became one of the leads in the lifeguard drama Baywatch. Images of Anderson in her red swimsuit still take your breath away. The action-comedy V.I.P. followed as Anderson dominated the 90s. While her film career never quite took off, Anderson still enjoyed success throughout the 00s. She appeared in numerous reality TV shows (Big Brother, Dancing With the Stars), released several books, and is known for her activist work. Her personal life has been quite chaotic, with Anderson having been married six times and dated a string of famous men.

Anderson is a natural stunner who has wowed audiences with her looks and talent for over four decades. Here are 15 pictures of a young Pamela Anderson in her prime to celebrate her longevity. 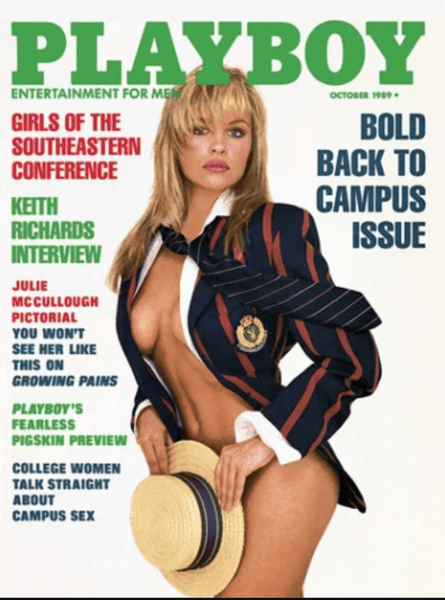 Dressed in a schoolgirl uniform, Pamela Anderson’s first cover for Playboy magazine is quite fetching. The British Columbia native looks every bit the innocent 22-year-old that she was at the time of the shoot. This would be the first of 14 Playboy covers Anderson would grace, making her one of the most featured models in the magazine’s history. It was known that Hugh Hefner was a big fan of Anderson and was somewhat of a father figure to her. 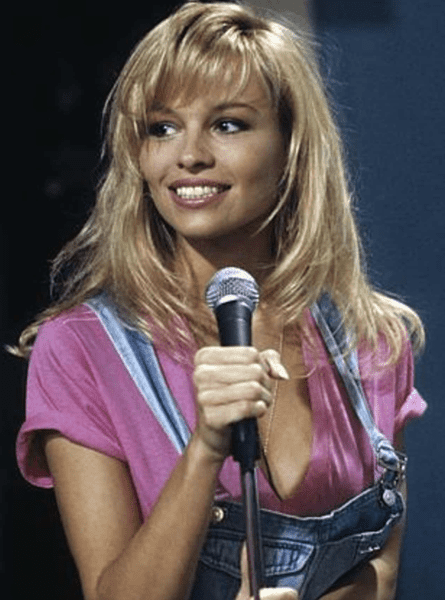 Anderson’s first re-occurring on-screen role was as Lisa on the first two seasons of Home Improvement. She plays the ‘Tool Time Girl’ who helps hosts Tim Taylor (Tim Allen) and Al Borland (Richard Karn) on the show within the show. As you can see from the image, Anderson is extremely young and spunky. She was a great foil for Taylor and Borland. 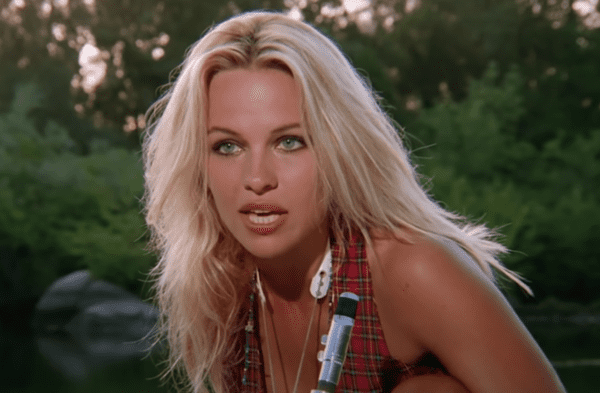 This image is taken from the first scenes of Pamela Anderson on Baywatch. Her character CJ Parker is seen whitewater rafting before David Hasselhoff’s Mitch Buchannon sneaks up on her while she is playing the saxophone (we kid you not). You can view her first scenes here if you want to relive the legend that would become Pamela Anderson. 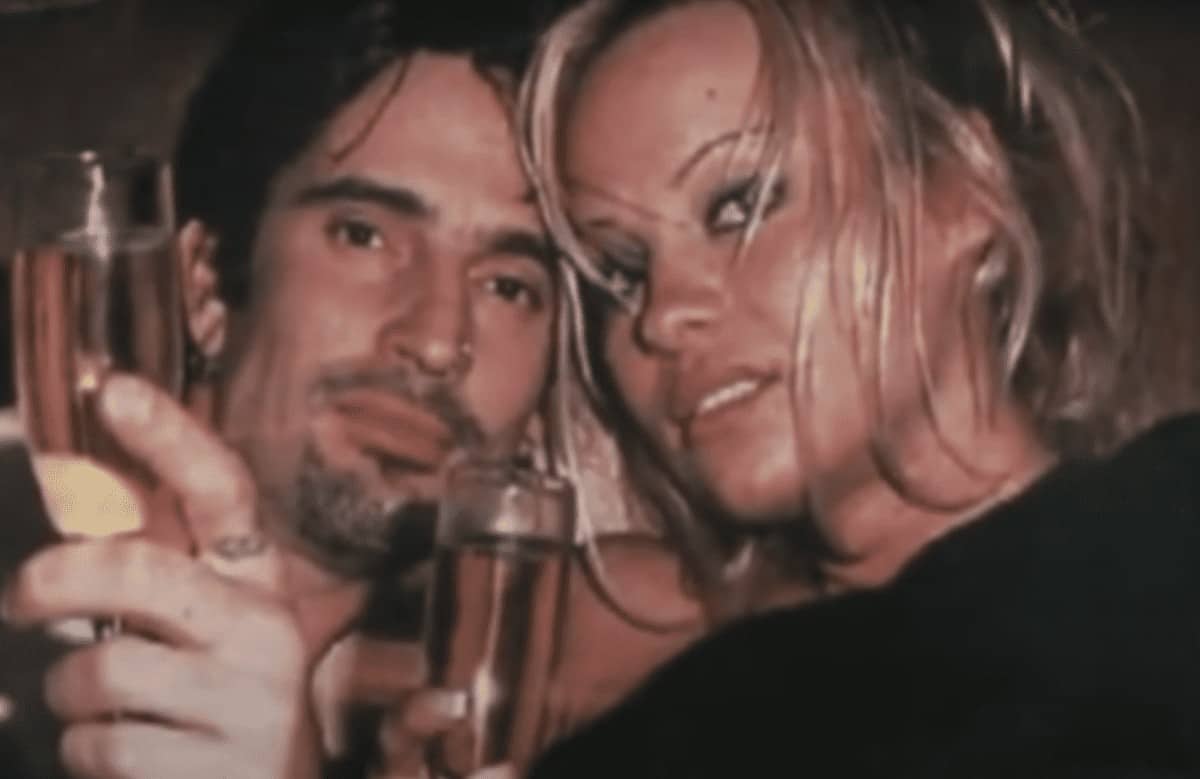 Pamela Anderson’s marriage to Tommy Lee was a rocky one. The two got hitched after having only met four days earlier. What followed was a wild romance full of controversy. The unauthorized release of their sex tape caused major issues for Pammy and impacted her marriage with Lee. Despite having two kids, Brandon Thomas Lee and Dylan Jagger Lee, the duo divorced after three years of marriage when Tommy Lee was convicted of spousal abuse. While they tried to reconcile in 2008, the two remain just friends for the sake of their children. 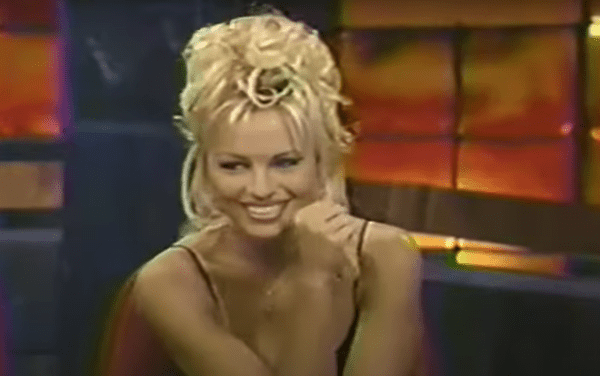 This image might be a little grainy, but you can still see how beautiful Pamela Andeson is. This is taken from her appearance on The John Stewart Show in the 90s. 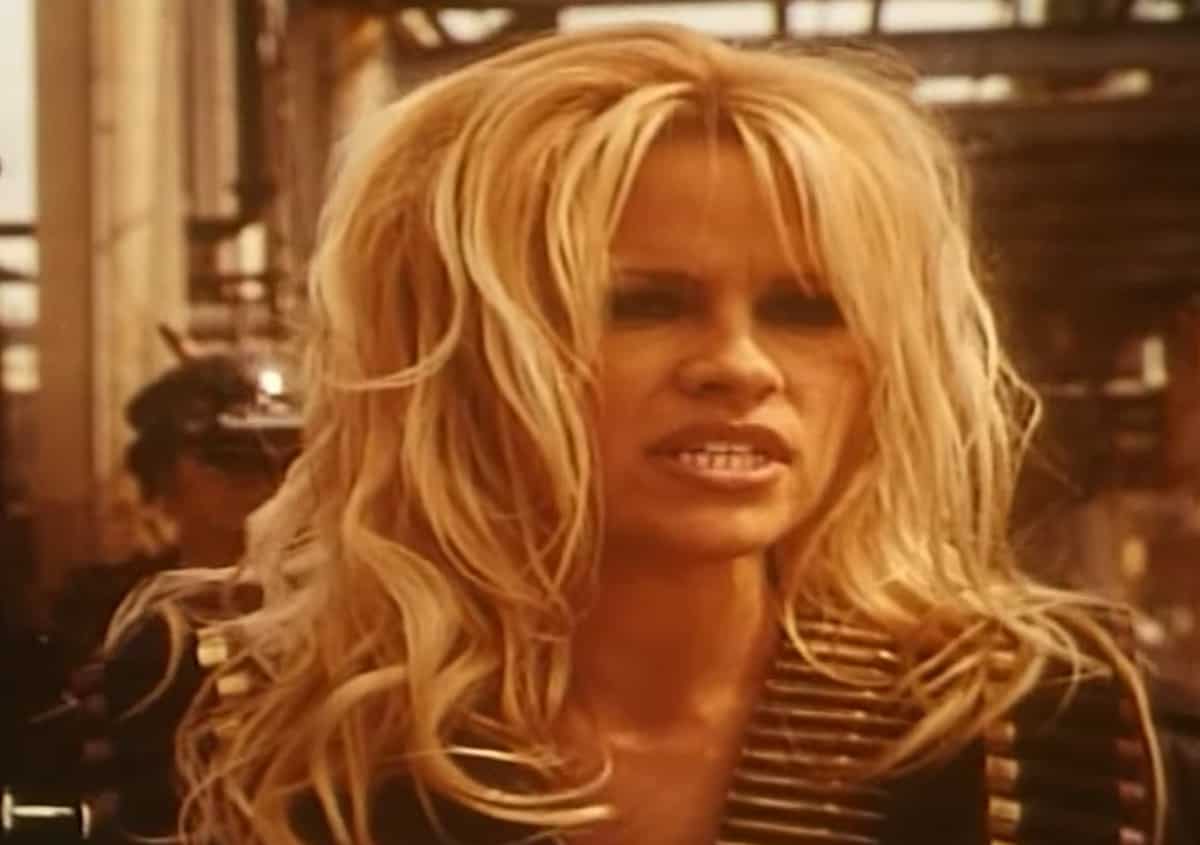 Pamela Anderson thought her movie career was set to take off with her starring role in the action flick Barb Wire. Instead, the film detailed her leading-lady status and turned her into the laughing stock of Hollywood. While not the worst film ever made, Barb Wire is pretty bad. It has developed a cult following over the years, thanks in part to the vibrancy of Andeson.

Here is an image of Pamela Anderson that everyone is familiar with. The blonde bombshell wearing her famous red swimsuit from Baywatch. The TV series is what Anderson is best known for and continues to play on cable stations throughout the USA. 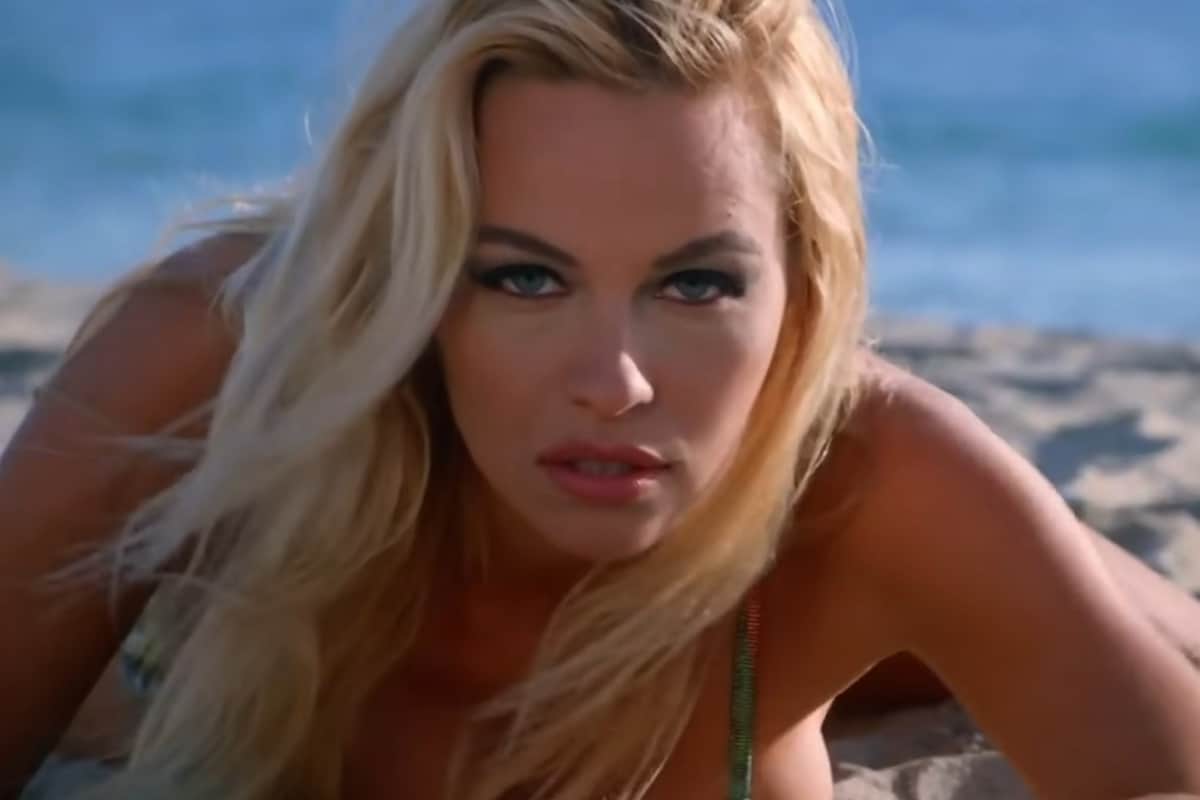 Here is another sexy shot of Pamela Anderson from Baywatch. While she isn’t wearing her red bikini, she is looking longing at the camera. Anderson oozes sex appeal and this image is a great example of how hot she is. A true beauty. 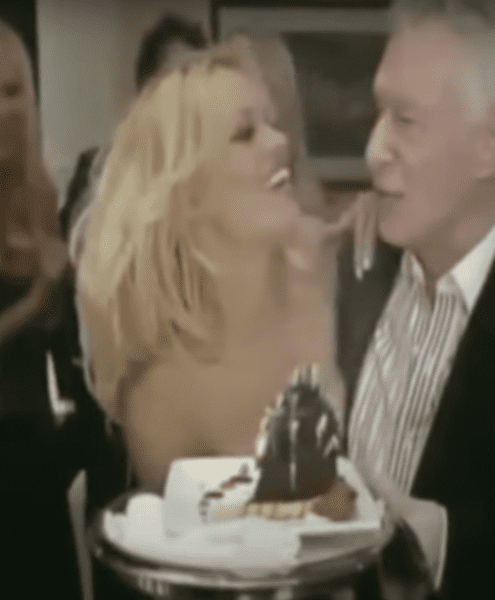 To celebrate Playboy founder Hugh Hefner’s 82nd birthday, Pamela Anderson visited the Playboy Mansion and gifted him a cake. Naked. That’s right, Anderson stripped down to her birthday suit to offer her birthday wishes to Hef. You can watch the full video here. 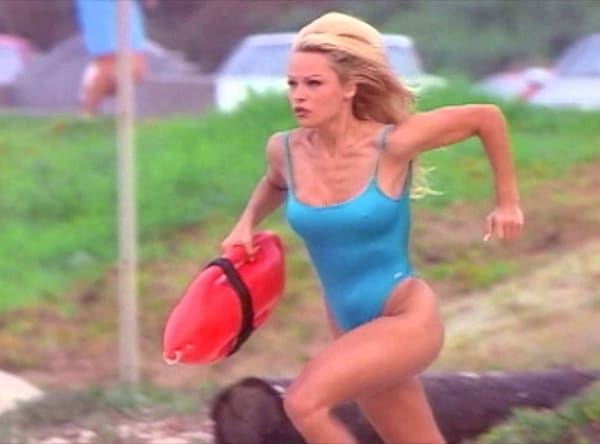 Here is another shot of a young Pamela Anderson from Baywatch. This time she is sporting a blue swimsuit as she runs toward the ocean on a rescue mission. As you can see from this image, Anderson is physically athletic. She possesses a raw sex appeal while also having a girl next door-type vibe. 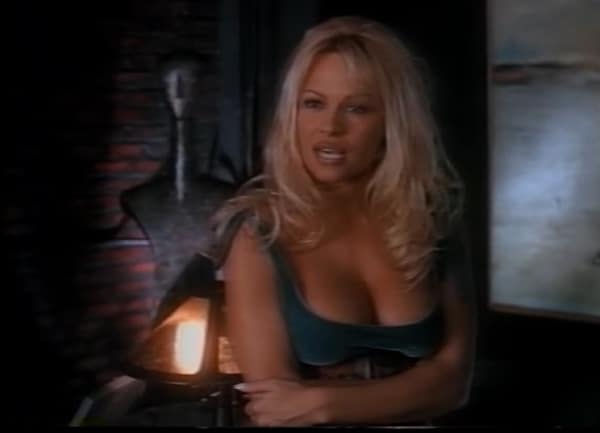 While critics gave V.I.P. mixed reviews, the show found a dedicated audience during its four-season run. Anderson stars as Vallery Irons, a woman who mistakenly saves a celebrity and is offered a job with a real-life detective agency. Her bumbling antics usually end up solving the cases the team is faced with each episode. It’s not going to win any awards but does feature Anderson in her prime, often wearing revealing clothing. 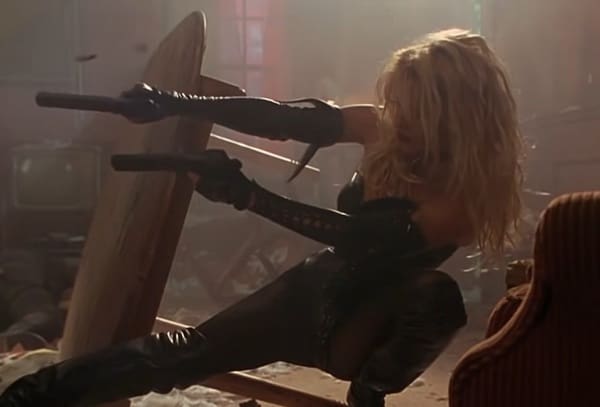 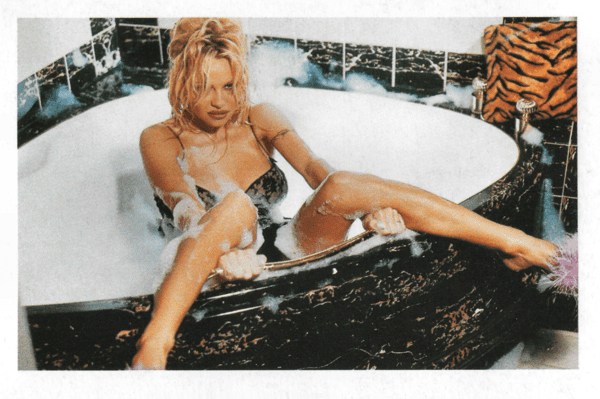 This sexy image of Andreson is taken from a postcard of the blonde beauty. Most likely taken around the time she starred in Barb Wire, it is quite the tantalizing shot and sure to please fans of Pammy. 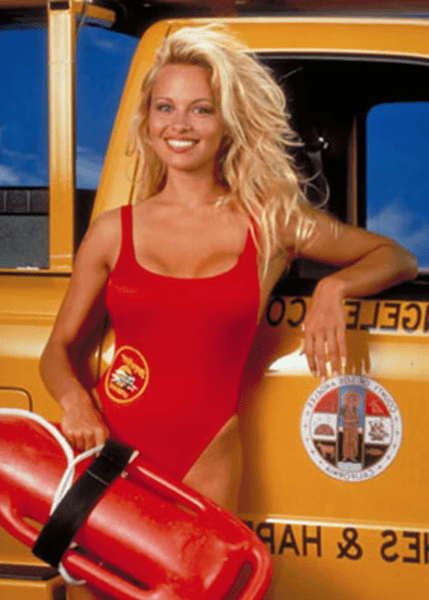 Here is another wonderful picture of Pammy in her red swimsuit. This promo image for Baywatch is another stunning example of how hot Anderson was in her younger days. 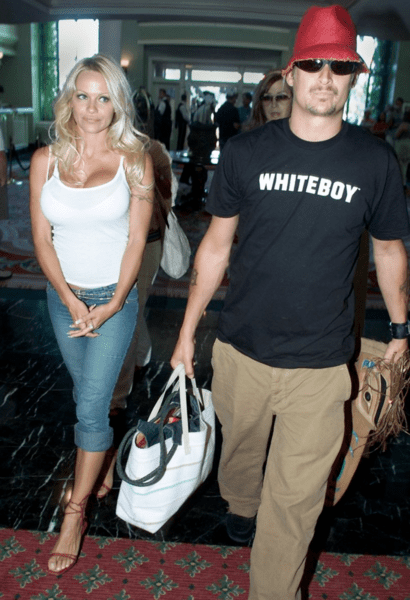 For some reason, Pamela Anderson and Kid Rock were a thing in the early 00s. Thankfully they didn’t last long as Pam deserves much better. This image of the two is quite alluring, and not because of Kid Rock. Pammy, wearing a tight white top and jeans is the image of perfection.