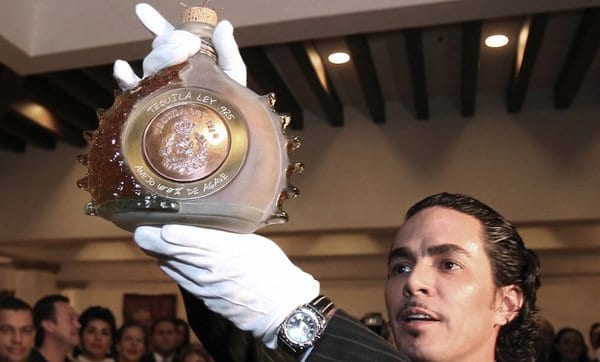 The 15 Most Expensive Alcohol Bottles in the World

Who doesn’t love a drink? What’s even better is when you splash out on the top shelf stuff. Nothing beats a little Black Label or maybe some good quality tequila. While forking out $100 for a tasty bottle of spirits is something most of us do when it’s a special occasion, for some, expensive alcohol drinks are the norm.

The rich and famous have no problem handing over hundreds, sometimes thousands of dollars for a unique blend of high-quality spirit. But sometimes even those making the big bucks are floored by the price of alcohol. There are some drinks out there that are worth millions of dollars! That’s right, over $1 million!

These one-of-a-kind tipples constitute some of the most expensive liquor and spirits on the market. Many of these expensive drinks are more than just incredibly tasting alcoholic drinks. They are packaged in bottles adjourned with jewels or come with extras that push the price into seven figures.

If you’re wondering what makes our list of the most expensive alcohol bottles in the world, read on and prepare to get thirsty. 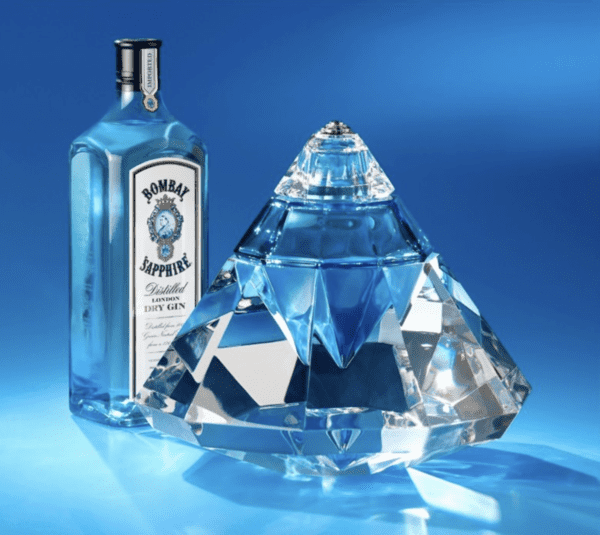 One of the most recognized gin brands in the world is also responsible for one of the most expensive alcoholic drinks of all time. Bombay Sapphire Revelation is your standard Bombay Sapphire gin, but it’s the bottle it’s housed in that makes this spirit so expensive. The bottle is cut in the shape of a diamond and is adorned with sapphires and diamonds. It has ten sides to the gem, each representing the different botanicals used in the process of making the gin.

The bottle is made in conjunction with jewelers Garrard and crystal brand Baccarat. As you can see from the image above, the results are spectacular. Only five of these bottles were ever produced with the profits from the sales going towards a variety of different charities. 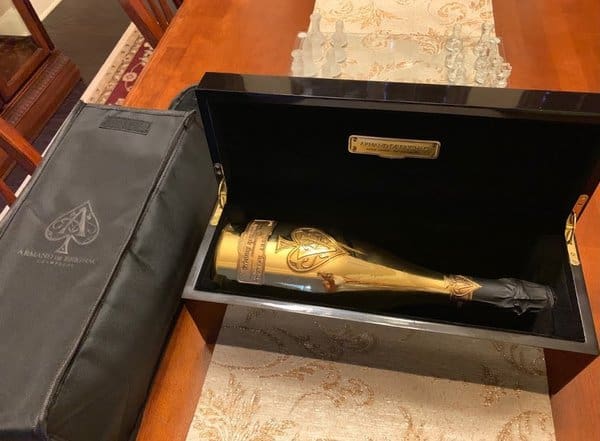 This champagne is loved by rappers, and for good reason. It’s owned by the legendary Jay-Z. The hip-hop mogul took ownership of the company in 2014 and has made millions of dollars selling the stuff around the world. What makes this version of Armand de Brignac so special is the gold bottle it comes in. Oh yeah, and the fact that it is a 30-liter bottle, which is equivalent to 50 750 ml bottles of Armand de Brignac.

Standing roughly four feet tall and weighing around 100 pounds, there is no bottle of champagne quite like Armand de Brignac Midas. 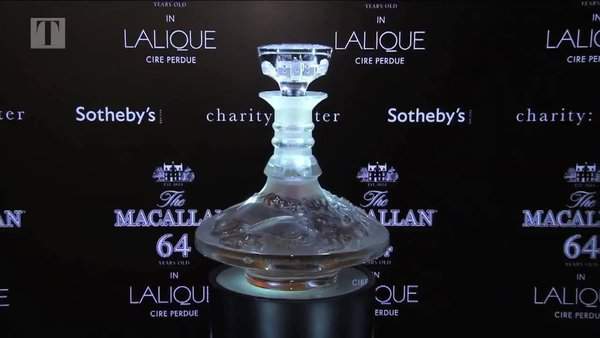 This is the first of many drops from The Macallan to feature on this list. This whisky, in particular, is considered extremely rare due to the way it is distilled and then matured. It is vatted from three sherry Spanish oak casks. The first was filled in 1942, the second in 1945, and the third in 1946. This process helps create the distinct taste of this whisky.

Only four of these bottles of The Macallan were produced, with each said to have been made from hand-cut crystal and weighing a whopping 25 pounds when full. 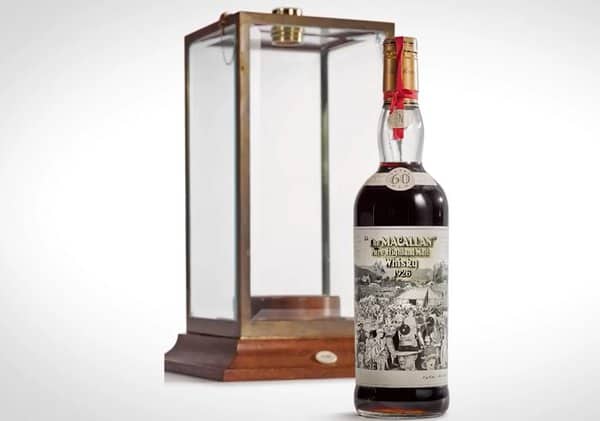 This bottle of wine sold at auction in 2018 for a touch over half a million in 2018. The single bottle of 1945 Romanee-Conti Wine is the highest-selling 750ml bottle of Burgundy in history. The reason for its rarity is that this particular bottle was not only produced in the fabled town of Vosne-Romanée, but only 600 bottles were ever made. Not only that, but the vines used to create this delicious drop were destroyed after this vintage and replaced with new grapes.

Described by Sotheby’s as “concentrated and exotic, with seemingly everlasting power – a wine at peace with itself,” it is easy to see why this exclusive wine got snapped up for such a price. 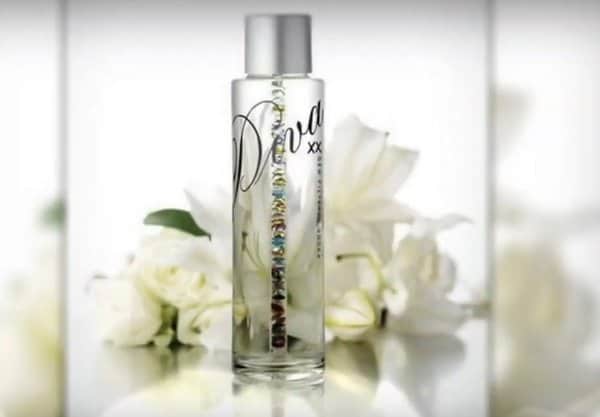 Diva Vodka is aimed at those who enjoy a high-quality spirit at an inflated price. Made from English grain, the vodka is filtered several times through different substances. Taking more than three weeks, the distillation process involves the vodka being filtered through ice water, activated charcoal, and diamond sand and crushed gems.

The finished product is then poured into bottles featuring diamonds, platinum, and gold, as well as a circular tube down the front containing 3,000 Swarovski crystals. This tube is also able to be removed, so you can use the crystals for other jewelry or sell them off to pay for the bottle. 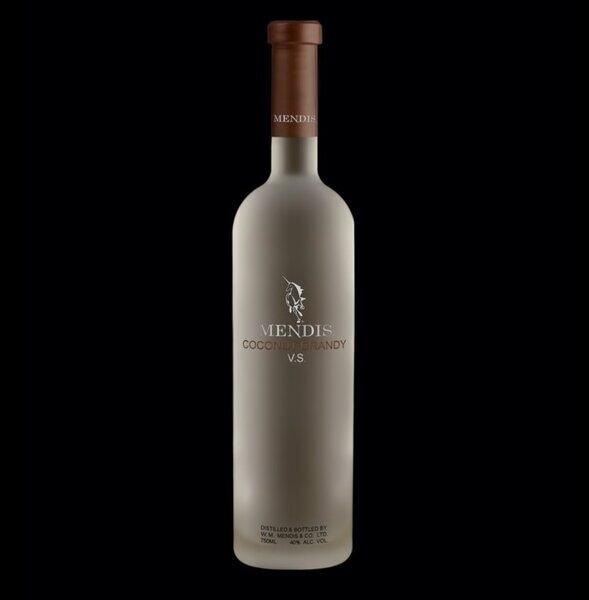 US-based distiller Mendis is responsible for this rather expensive bottle of brandy. Although it is called coconut brandy, not one actual coconut is involved in the distillation process. The brandy is actually made using the sap from the Borassus palm found in Sri Lanka. It is aged in wooden casks for two years before being bottled.

Unlike the majority of expensive alcohol on this list, the bottle Medis Coconut Brandy comes in isn’t that fancy. It’s just a clear bottle that is numbered and certified by the distillery founder W.M Mendis. What makes it so unique is that only 10 bottles were ever made, hence the massive price tag. 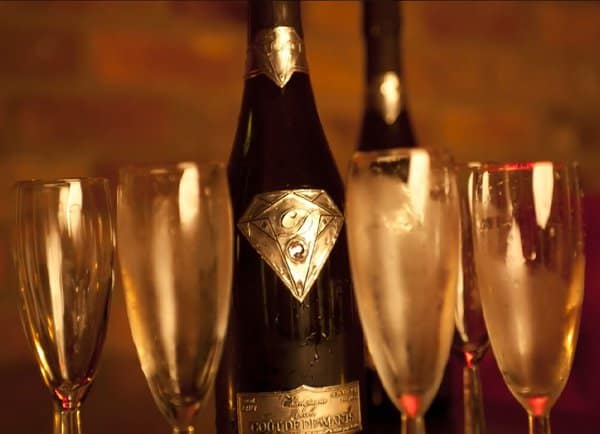 This handmade luxury champagne was curated in the village of Oger in France. This is a high-end alcoholic beverage that comes in an incredible looking bottle. Luxury designer Alexander Amosu is responsible for the sleek bottle that replaces the original crystal logo with one made from 18-carat white gold with a 19-carat white diamond placed in the center.

Speaking about the bottle Amosu said, “The bottle already has a distinctive look with its natural design, all I had to do is bring it to the next level of ultimate luxury.” Despite its price, the Goût de Diamants is a rather simple looking bottle that houses delicious champagne. 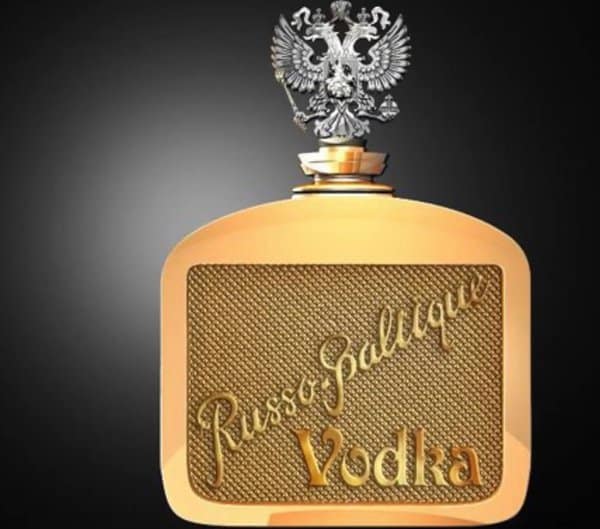 Here is something for vodka fans. This expensive vodka is surprisingly made by Russian car maker Russo-Baltique. The smooth spirit comes in a bottle that resembles the radiator guard used for the Russo-Baltique car. The bottle is 30 mm thick and made from bulletproof glass. The bottle top is crafted from pure gold and features a replica of the Russian Imperial Eagle encrusted with diamonds.

Created to celebrate the 100th anniversary of Russo-Baltique, the first bottle of this luxurious spirit was gifted to the Prince Albert of Monaco. It also popped up in an episode of House of Cards. 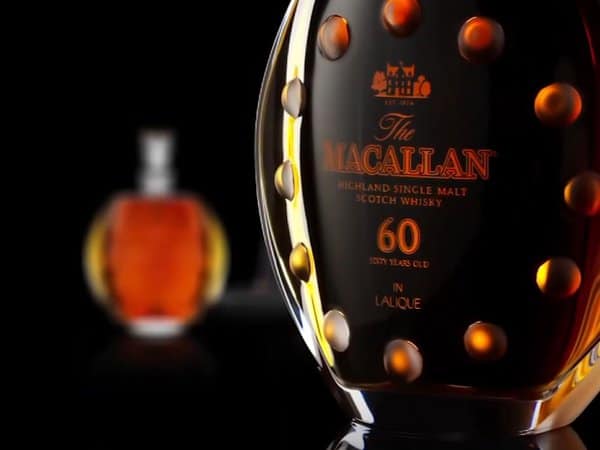 This rare bottle of The Macallan whisky has sold at auction several times for massive profits, with the last bottle going for a cool $1.4 million in 2018. What makes it so unique is the fact that it features a bottle design by Michael Dillon. The Irish artist took three months to hand paint the bottle that depicts the Easter Elchies House of The Macallan and the Scottish Highlands. For his efforts, Dillon is allowed to purchase any bottle of The Macallan range at cost price for the rest of his life, which sounds like a good deal to us.

Not only is the bottle fantastic, but the whisky inside is mouth-watering. The Macallan Michal Dillon contains a 60-year-old matured spirit first crafted in 1926. This makes it one of the rarest whiskies of all time. 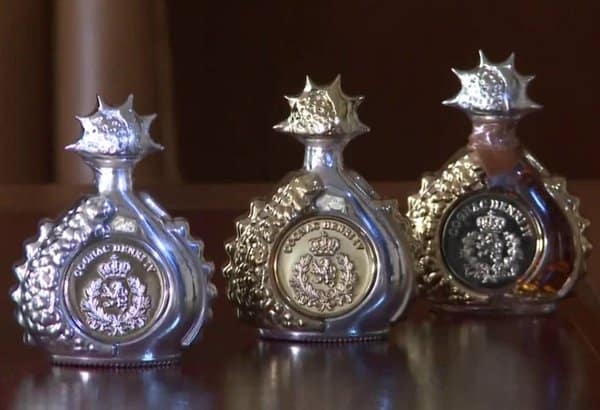 Also known as ‘the DNA of cognac,’ this tasty drop has been aged for an incredible 100 years. Produced since 1776, this expensive cognac has an alcholo percentage of 41% and comes in an extravagant bottle adjorned with jewels. The bottle is coated in 24 carat yellow gold and sterling platnimum, giving it a very regal look. If that’s not impressive enough, there is a whopping 6,500 diamonds decorating the bottle. Weighing around 17 pounds, it’s easy to see why this hefty bottle of congnac is so expensive. 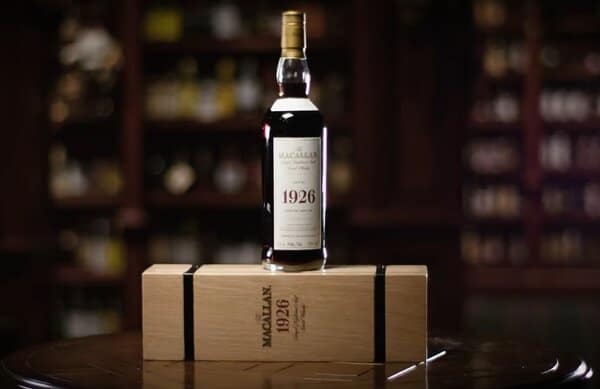 The Macallan single malt Scotch Whisky is one of the most famous whiskies on the planet. Distilled at the brand’s manufacturing plant in Scotland since 1824, The Macallan is loved by whiskey connoisseurs. The Fine & Rare series is a range of whisky distilled between 1926 and 1991 that is aimed at collectors. One such bottle from this collection sold at auction for $2 million.

The 1926 60-year-old vintage is one of the oldest bottles of whisky to sell at auction. It is often referred to as the ‘Holy Grail’ of whisky, with only 40 bottles ever produced. This is why it went for so much at auction. So while it might not come in a fancy bottle, it tastes like nothing else on this list. 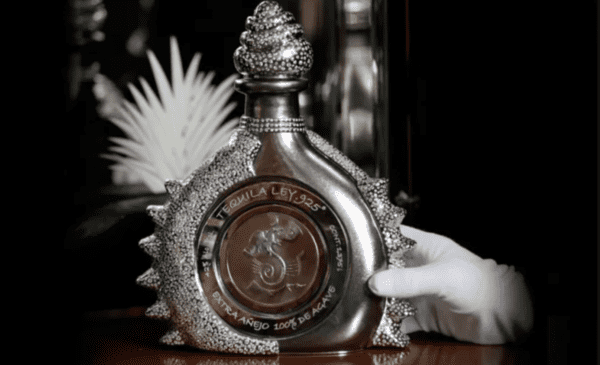 Priced at a whopping $3.5 million, Tequila Ley .925 Diamante is the most expensive tequila in the world. Tequila Ley is made from premium extra Anejo agave and barrel-aged for seven years. It is housed in an extraordinary bottle that took 17 artists ten months to create. The bottle is given the name the Diamond Sterling Bottle due to the materials that surround it. The bottle features 4.5 pounds of platinum and 4,100 perfectly white diamonds.

It is an impressive feat of construction and easy to see why the price tag for this tequila is so expensive. It is certainly one of the more expensive alcohol brands on this list that we mere mortals will never be able to afford. 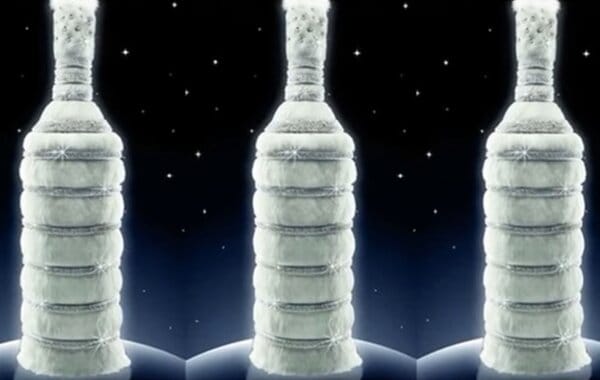 As the name suggests, this supreme vodka is suited for those who fit into the billionaire category. Billionaire vodka comes from the mind of luxury designer Leon Verres. Inside the bottle, you will find 18 liters of the purest vodka distilled according to the original Russian recipe. The vodka was even filtered using diamonds, adding to the luxurious appeal of this alcoholic beverage.

The outside of the bottle is the real star, covered in 3,000 real diamonds and Swarovski crystals. A known animal rights activist, Verres has made sure the fur surrounding the bottle and the cap is fake. It also comes with a diamond-encrusted ice bucket and a pair of white gloves to wear when pouring the vodka. 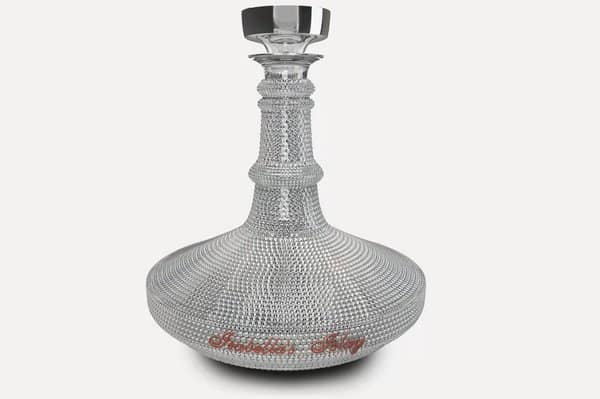 The world’s most expensive bottle of whisky comes from the Luxury Beverage Company in the United Kingdom. They are responsible for Isabella Islay Whisky, a single malt Scotch whisky aged 30 years. While no doubt tasty, it’s not the whisky that makes this drink so expensive. Once again it is the bottle it comes in.

Isabella Islay Whisky comes in a glamourous bottle with a white gold label. It contains a stunning 8,5000 diamonds and close to 300 rubies. If that isn’t enough, this luxurious whisky comes in a solid oak box embedded with 18-carat gold designs and a silver plaque. The bottle is selling for a tidy $6.2 million. 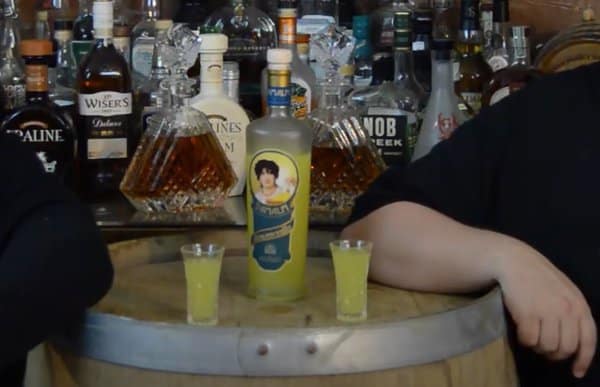 Limoncello is a favorite after-dinner drink enjoyed by Italians. It is a digestive meant to help with settling your tummy after a big meal. D’Amalfi is well known for their limoncello, so much so that they decided to commission a very special bottle for an unnamed Italian lady. While the liqueur inside the bottle is the same limoncello most people get to experience, the bottle itself makes this the most expensive alcohol ever produced.

The exclusively designed bottle sports three single-cut flawless diamonds on the neck totaling 13 carats. There is also a super rare 18.5 carat diamond on the front of the bottle. Two bottles of this liqueur were created, one for the lady and another for some lucky person to buy. That could be you, as long as you have a spare $43.6 million on hand.