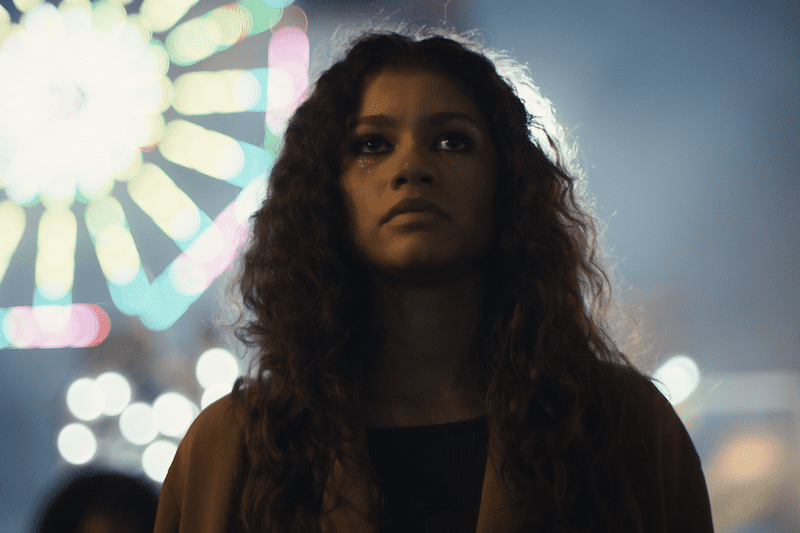 20 Relatable Euphoria Memes for Fans of the Show

Euphoria is arguably the most successful teen drama of the 21st century. It draws millions of weekly viewers and is HBO’s most watched show behind Game of Thrones. The series revolves around Rue Bennett (a magnificent Zendaya), a drug-addicted teen trying to get clean. As she struggles to find her true self, she interacts with a wide range of interesting and horrifying characters.

Euphoria deals with many heavy themes, such as drug addiction, sexual assault, power roles, and gender issues. It’s also full of sex, drugs, and rock and roll and has come under fire for the amount of nudity shown and the unrealistic portrayal of today’s youths. While it might sound rather weighty, Euphoria does provide some levity, often through Euphoria memes.

With social media enabling people to air their thoughts at the push of a button, the internet is quickly flooded with memes about Euphoria during each episode. Some of these relate to what is happening on the show. Others use certain scenes and moments from the show to make hilarious jokes. What they all have in common is how funny they are.

With season three of Euphoria not due until sometime in 2023, here are 20 relatable Euphoria memes to tide you over until then.

20 Relatable Euphoria Memes for Fans of the Show 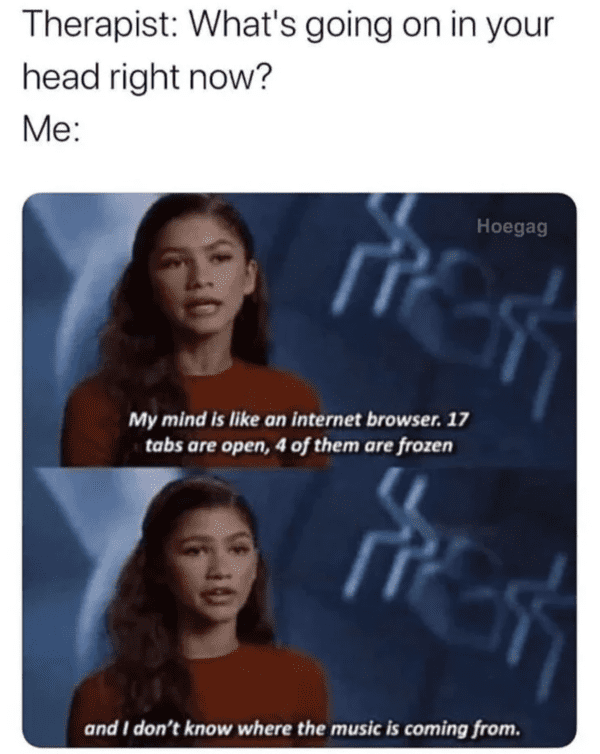 This is a very apt description of how most people feel when watching each season of Euphoria. There is a lot going on and there always seems to be music playing in the background. 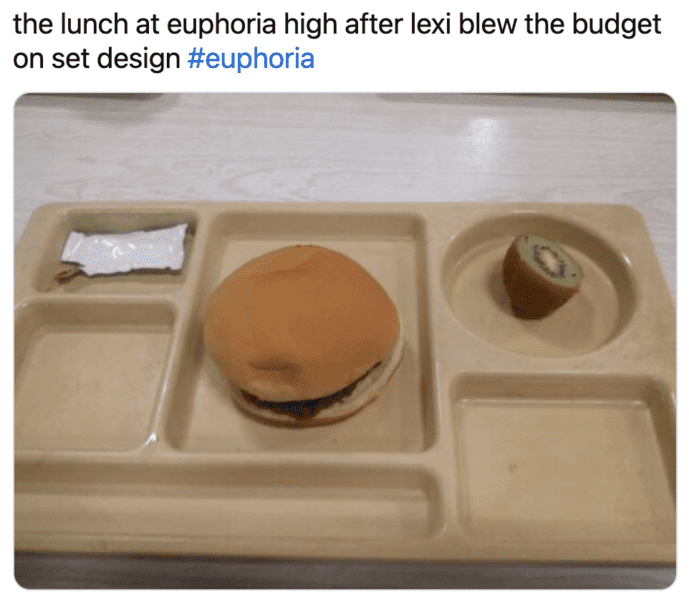 A lot of people went online to express their frustration at the East Highland High School play Lexi Howard (Maude Apatow) put on. Not because it was bad, but because it was so well planned and choreographed that it must have cost a fortune to put on. As you can see from this meme, the money for the play was taken from the cafeteria budget.

3. Bitch, You Better Be King 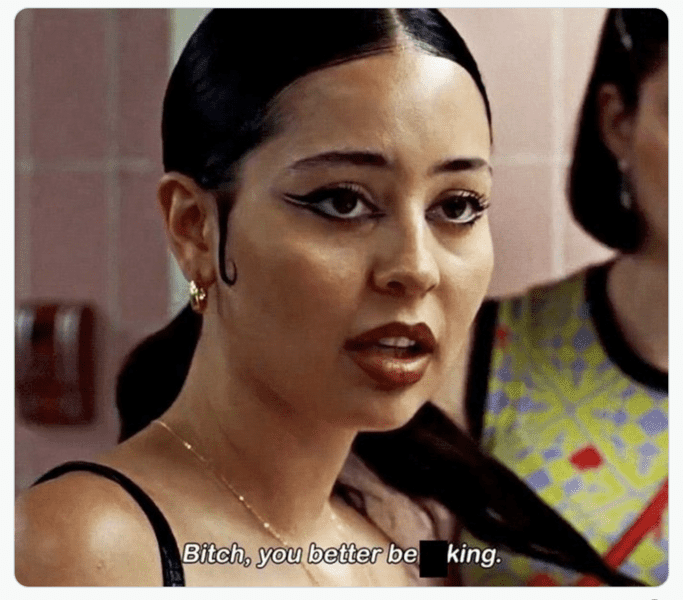 There is a moment during an episode of the season when Maddy (Alexa Demie) criticizes the way Cassie (Sydney Sweeney) is dressed. When Cassie doesn’t quite get the joke, Maddy replies, “Bitch, you better be joking.” This meme changes that quote to fit the narrative of Lady Macbeth and is sure to please Shakespeare and Euphoria fans.

4. When Violence Is the Only Answer 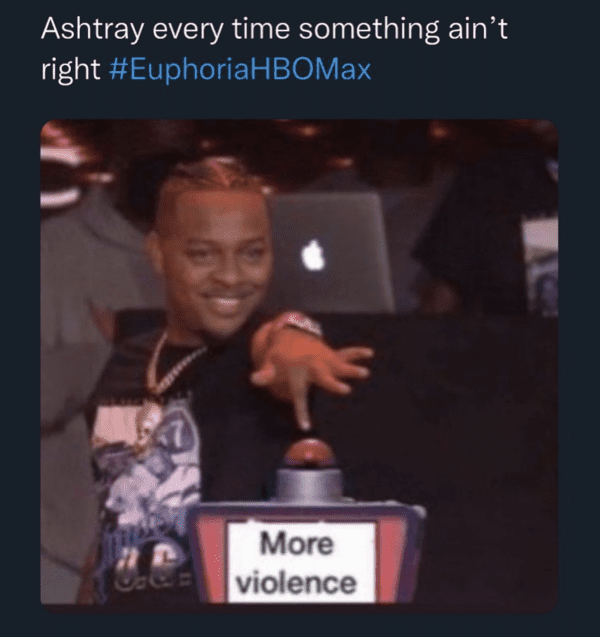 Ashtray (Javon Walton) is one of many Euphoria fans’ favorite characters, but he has a few problems. While he loves his brother Fez (Angus Cloud), he is quick to use violence as the answer to any situation that seems to be going south. This is especially true during Euphoria season two when shit really hits the fan. 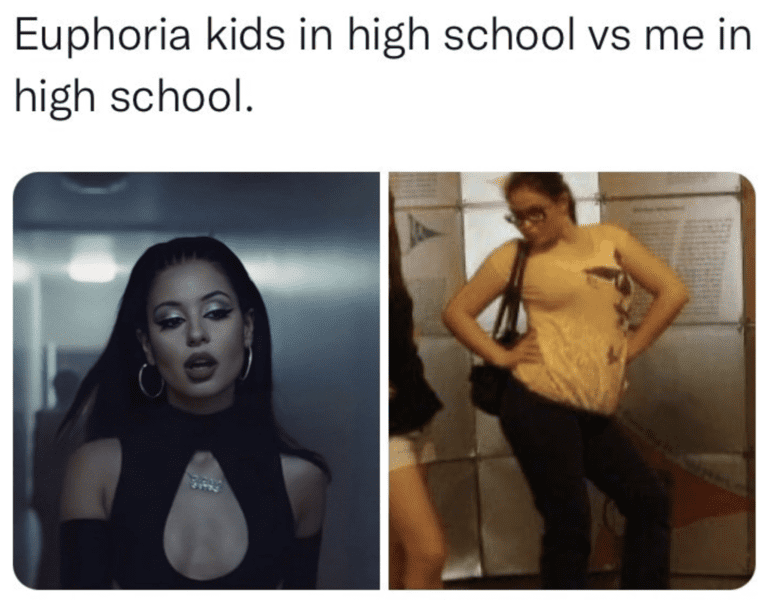 The characters in Euphoria are dressed incredibly well, especially when attending high school. Maddy is all about the fashion during the two seasons aired so far. I know I definitely didn’t dress like that in high school, as this meme proves. Euphoria memes don’t get much funnier and true-life than this one.

6. You Mean That Wasn’t the Whole Song?! 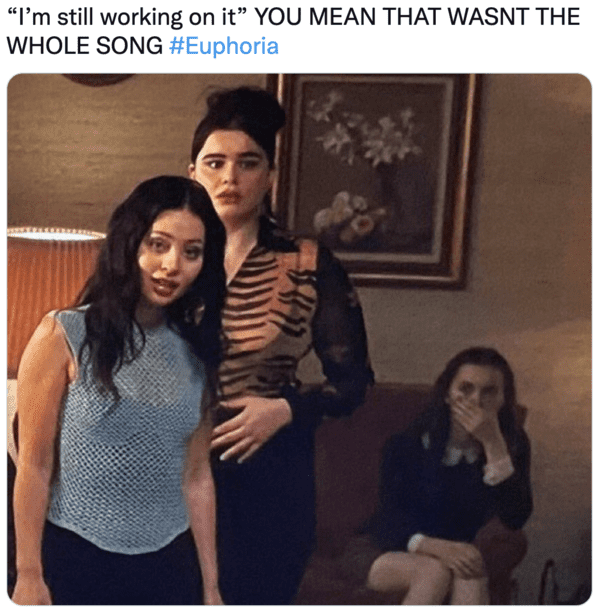 The season finale of Euphoria season two features Elliot (Dominic Fike) singing a song to Rue. Unfortunately, fans didn’t really vibe with the song which ends up going for almost four minutes. After playing the song, Elliot mentions that it’s not finished yet. This meme uses another scene from the show to show the reaction many fans had while watching. 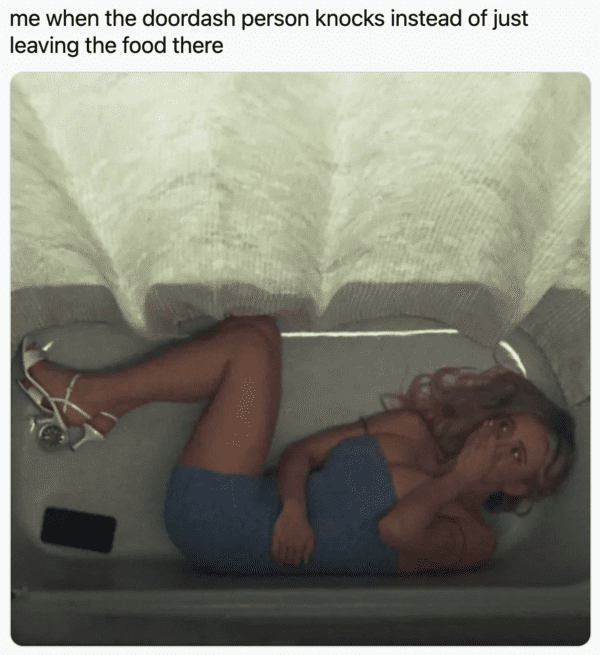 There is no reason for your Doordash delivery driver to knock when you clearly state for them to leave the food at the door. This meme of Cassie hiding in the bathtub is an exact representation of me when this happens. 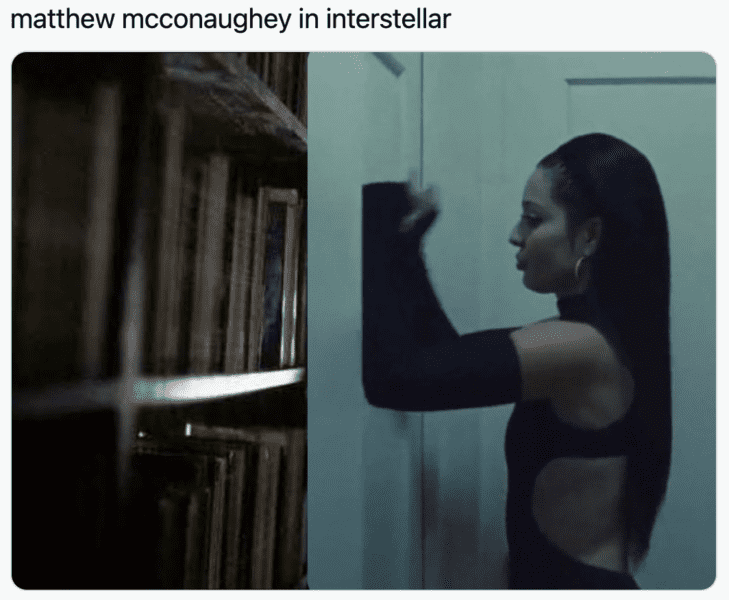 During the first episode of Euphoria season two, Nate Jacobs (Jacob Elordi) and Cassie have sex for the first time. It just so happens to be in the bathroom at a New Year’s Eve party where Maddie is also present. This meme captures the moment she is banging on the door to get into the toilet. It mirrors a scene from Interstellar when Matthew McConaughey is banging on a wall during the tesseract scene. 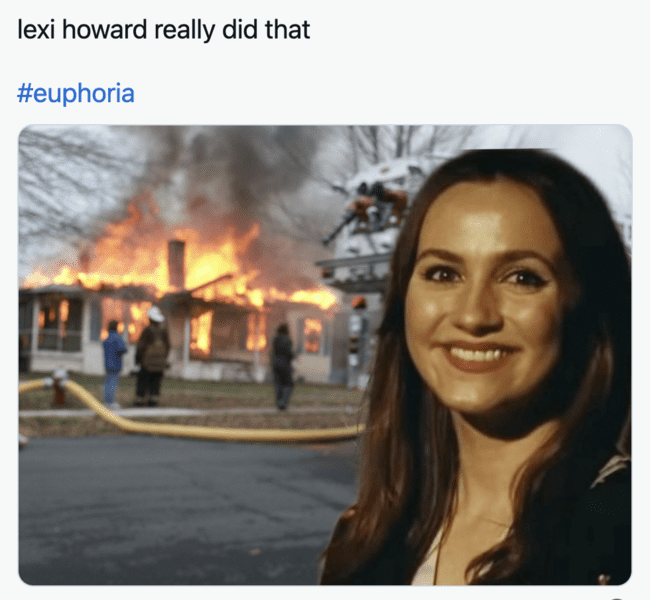 This is another classic meme that has been adjusted to suit Euphoria. The original features a young girl smiling as a house burns down in the backyard. This version replaces her with Lexi smiling and the burning house representing the play she wrote, which has burned a lot of bridges with her friends and family. 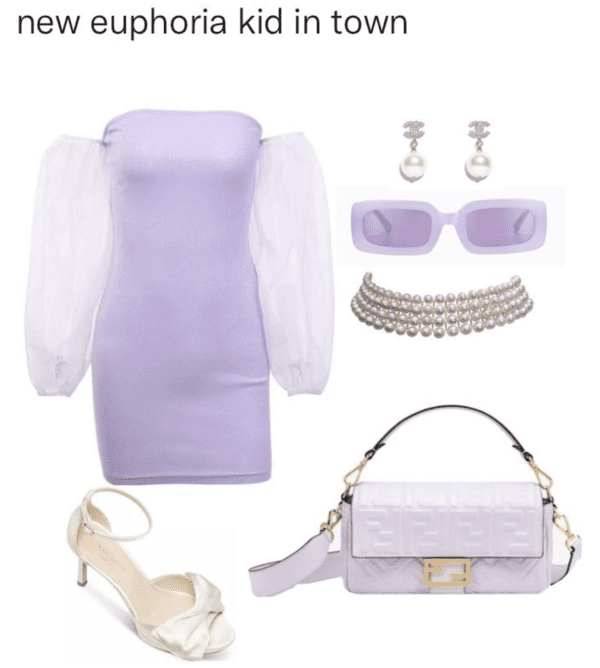 I’ve previously mentioned that the fashion sense of the Euphoria characters is something special. This meme is a great example of what any new kid attending the school needs to wear to fit in. Euphoria high school memes like this are sure to please fans of the show. 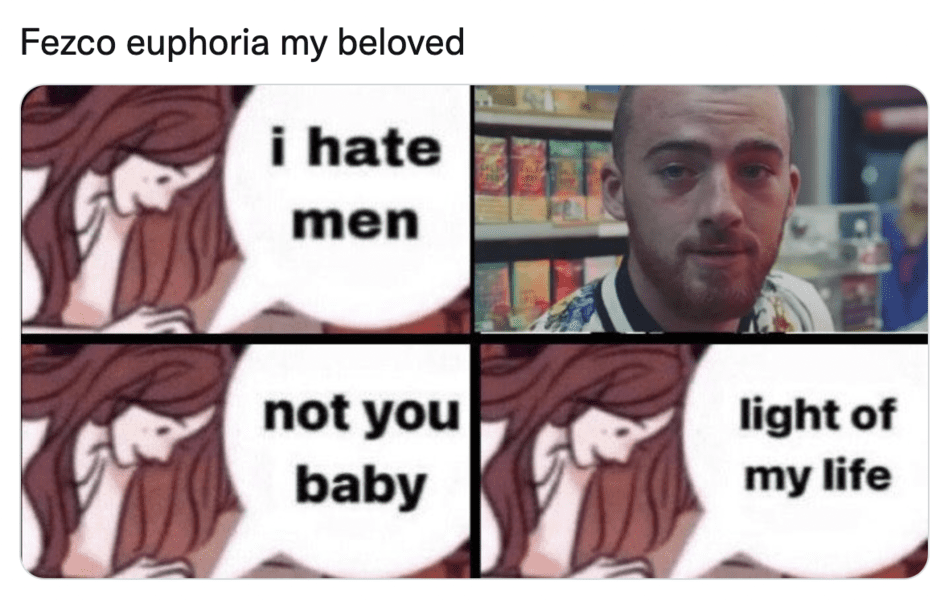 While the majority of the males on Euphoria are terrible people (this is aimed at you Nate Jacobs), Fezco is actually a decent dude. Sure, he sells drugs and covers up for his murdering brother, but that aside, he’s a really good dude. This meme sums up how we all feel about him. 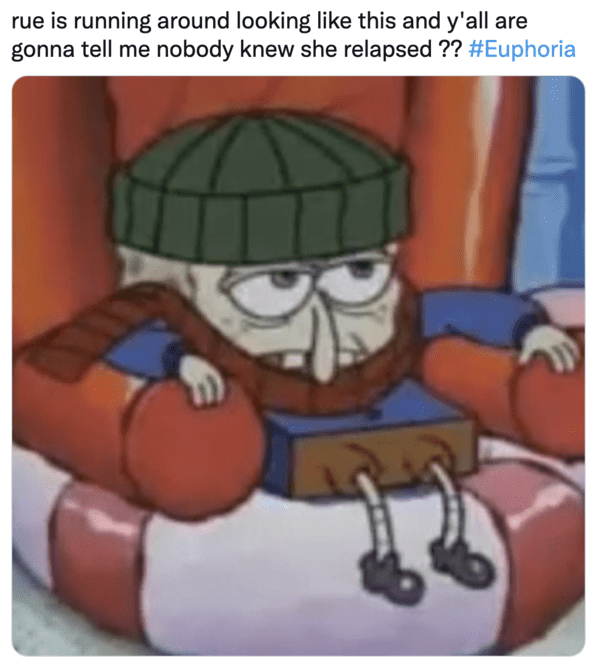 One of the major plot lines running through Euphoria is Rue’s struggle with substances. It’s funny how nobody realizes she has relapsed in the second season despite her dressing like someone who lives on the street. 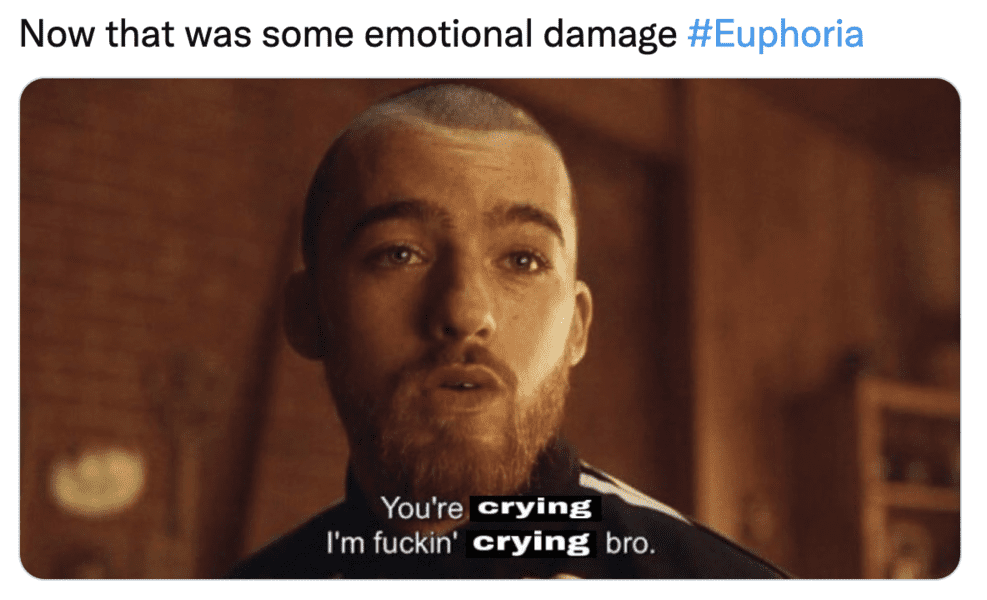 Taking a funny scene where Fez has no idea what is going on, this meme changes his classic “You’re confused? I’m fucking confused, bro” statement to “You’re crying? I’m fucking crying, bro.” It perfectly sums up how most of us felt watching the finale. 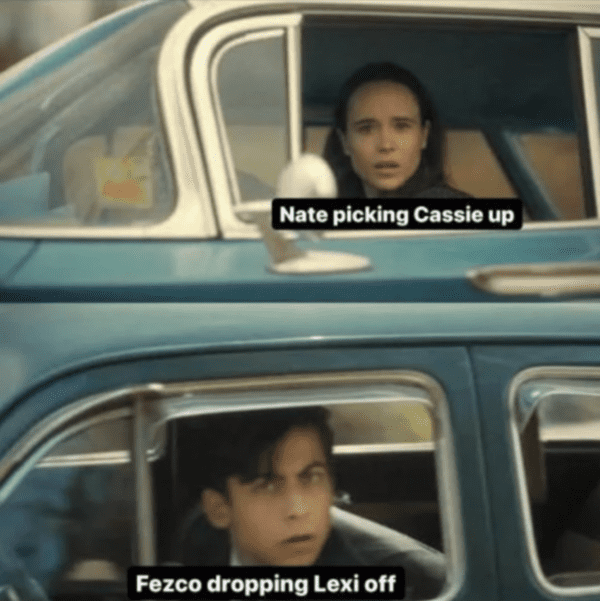 Nate and Fezco don’t like each other. This hilarious meme shows what it would be like if they drove past each other when leaving/going to the Howard sister’s home. 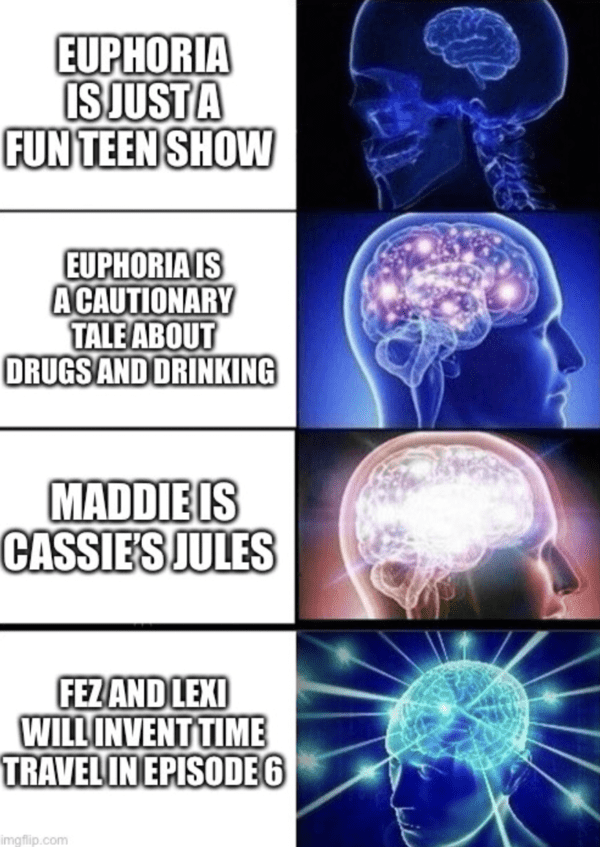 This Euphoria meme shows different levels of your mind being blown by events in the series.

16. I Took That Personally 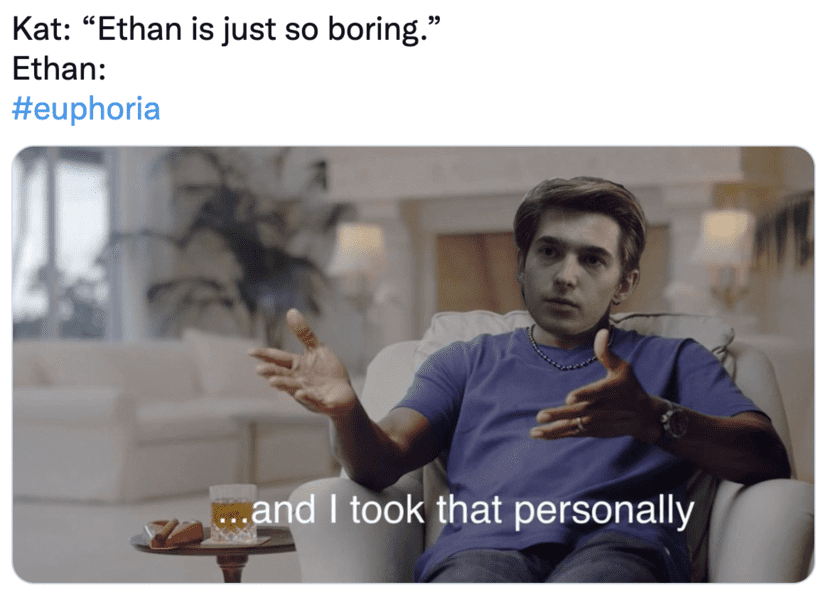 Memes within memes are the best. This one involves the Michael Jordan ‘I took that personally’ meme. Kat Hernandez (Barbie Ferreira) and Ethan Lewis (Austin Abrams) seemed like they were meant for each other until Kat got bored of him and gave him the flick.

He took that personally and turned himself into the star of Lexi’s high school play, making Kat think twice about why she dumped him.

17. When Cal Meets Fez in Prison 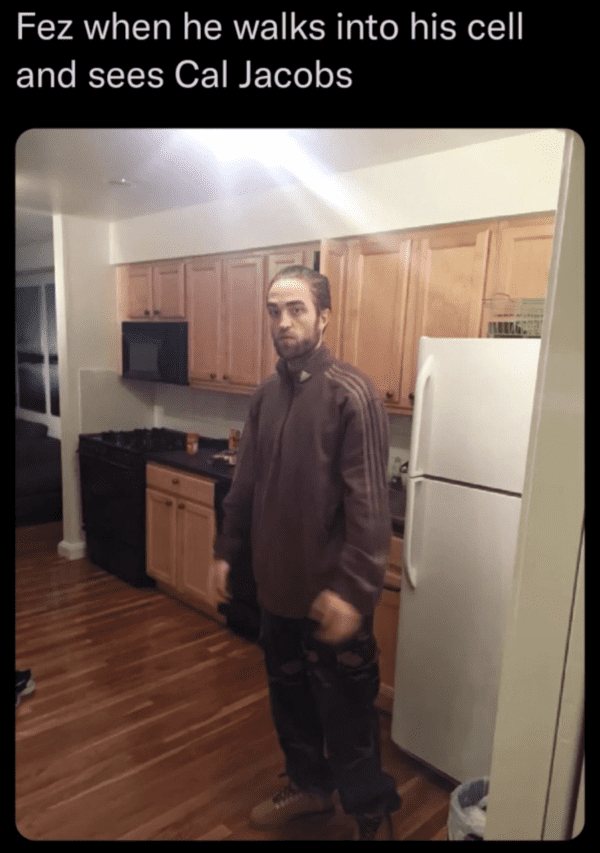 Cal Jacobs (Eric Dane) and Fezco aren’t friends, but they might need to stick together in prison. With both being arrested at the end of season two, it is highly probable they will be sharing a cell for at least one night. They might need to talk through their differences so they can survive.

Robert Pattinson looking perplexed wearing a tracksuit in the kitchen sums this up perfectly. 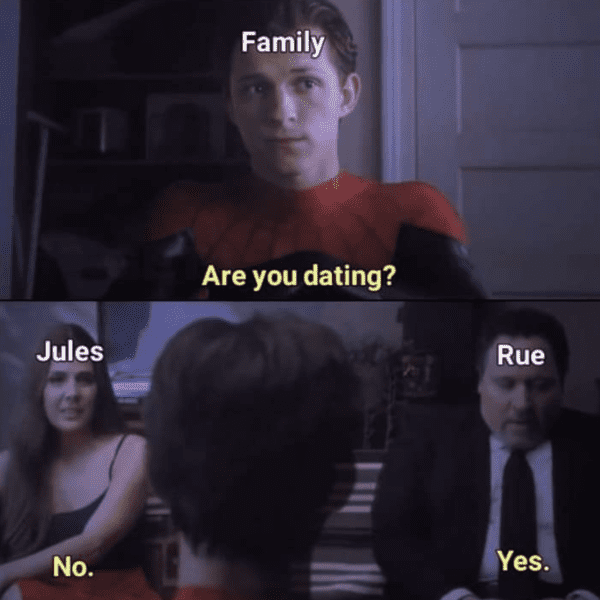 Rue and Jules Vaughn (Hunter Schafer ) have a complicated relationship throughout Euphoria, as articulated by this Spider-Man meme. The look of confusion on Tom Holland’s face is very relatable when watching this show. 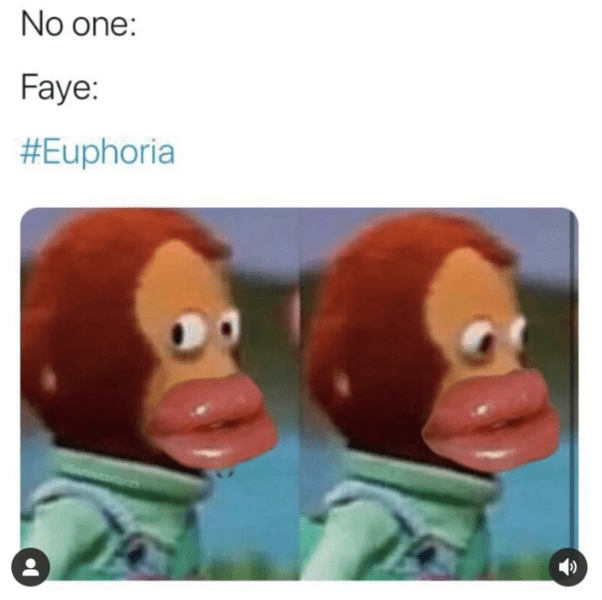 This one doesn’t need much explaining. Chloe Cherry is possessed with some big lips. 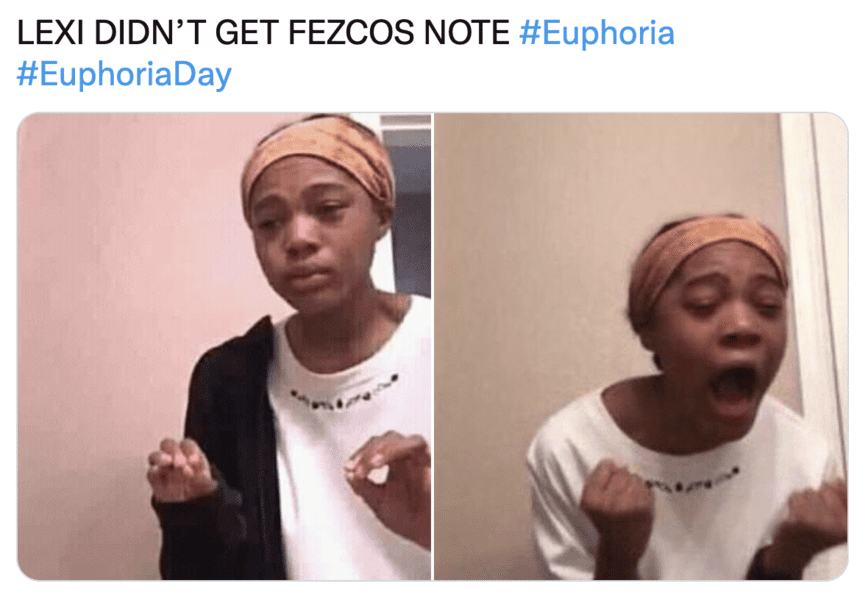 Will we ever learn what Fez wrote in the note to Lexi?