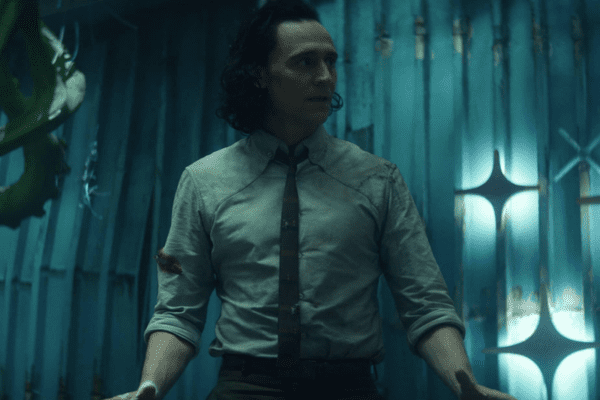 One of the more exciting Marvel series to be released over the past few years is Loki. Centered around the God of Mischief, played wonderfully by Tom Hiddleston, the show is a breath of fresh air in the Marvel Cinematic Universe. While initially positioned as a villain, Loki is more of an anti-hero. Having last been seen stealing the Tesseract in The Avengers: End Game, Loki picks up not long after. The prankster has been captured by the mysterious Time Variance Authority (TVA). The organization gives him a choice; help fix the timeline he messed up when using the Tesseract or be wiped from existence. Of course, Loki decides to save his own skin, leading to hilarious adventures through time. These events and moments from the series have also created some very funny Loki memes.

These Loki memes range from humorous comments on events and characters in the show to relating the series to moments in the real world. What they all have in common is that they will have you giggling along while reading them. So read on and enjoy these 20 hilarious Loki memes. 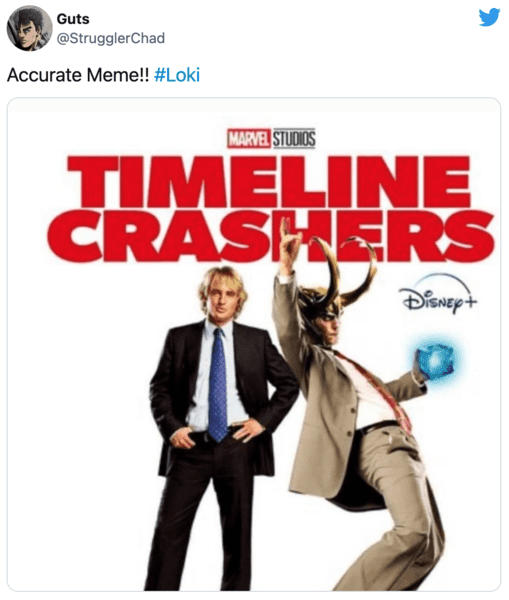 If Loki was a movie and not a series, this is what it would be called.

2. Loki the God of Kindness? 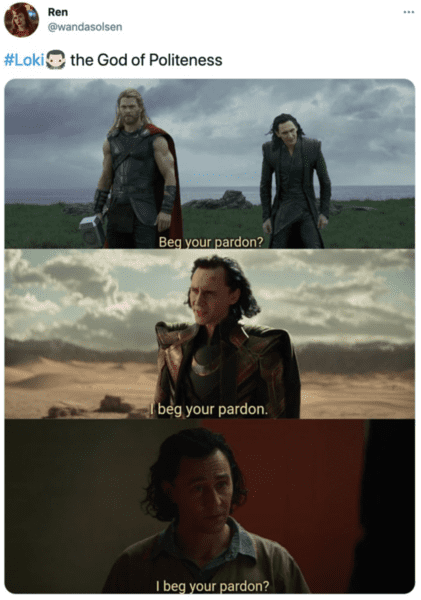 When you realize Loki has lowkey manners and is actually a nice guy. Sometimes. 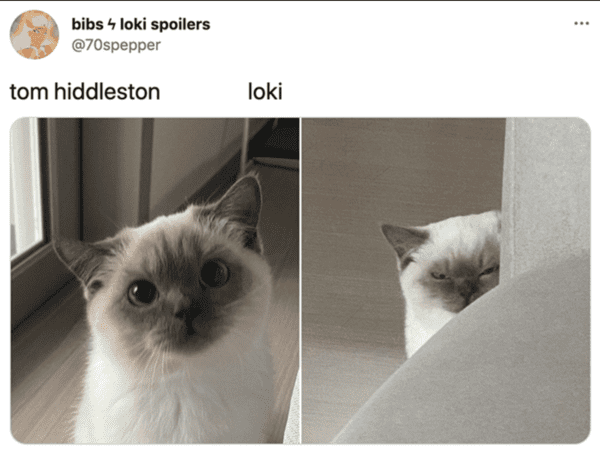 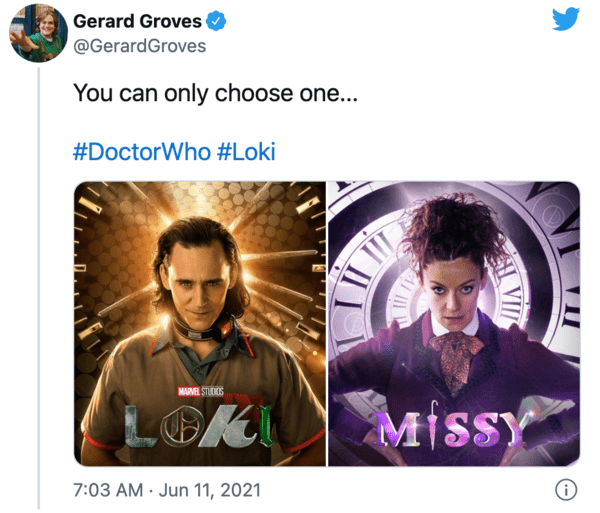 While they are two different shows, the advertising for Loki and Dr. Who are quite similar. Maybe a Loki/Dr. Who mashup is on the way? 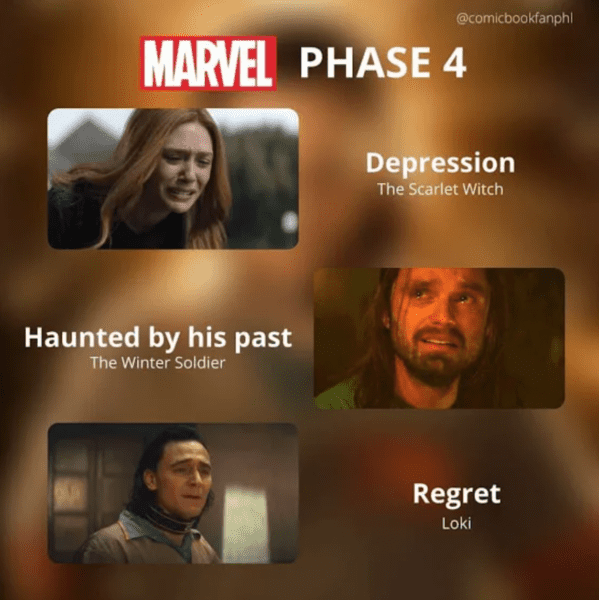 Why is it that this latest phase of the MCU focuses on series where the main character is going through a lot of hurt and pain? 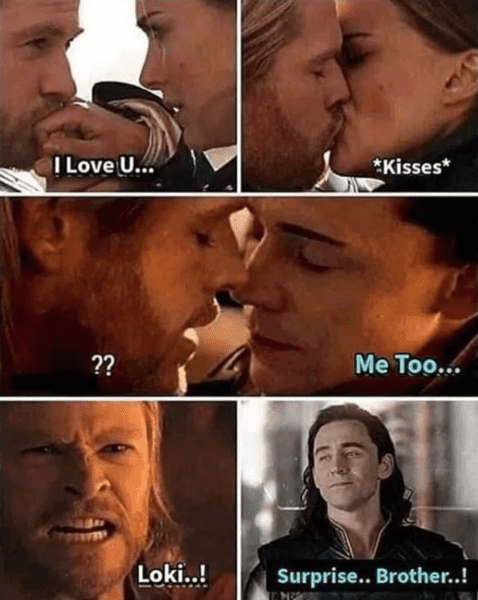 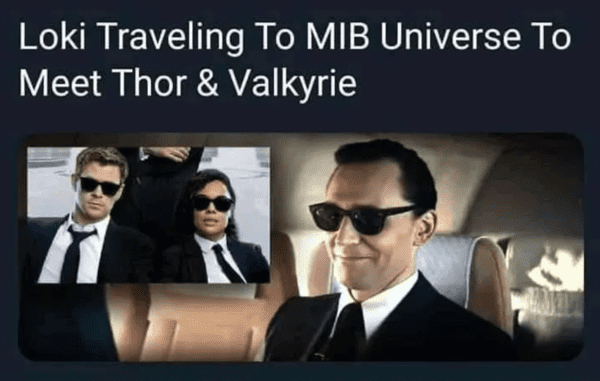 Here is Loki doing his best Men in Black impression. This is one crossover we would love to see! 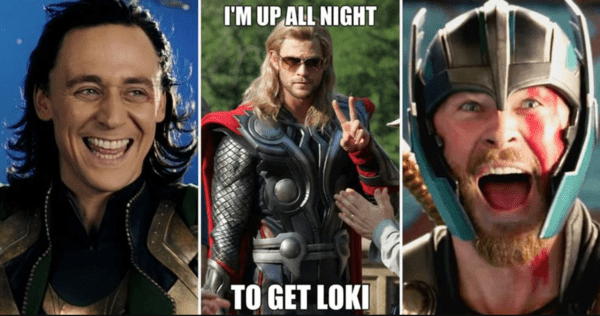 This one is a play on the Daft Punk song Get Lucky. Viewers of Loki are sure to find the humor in this one. 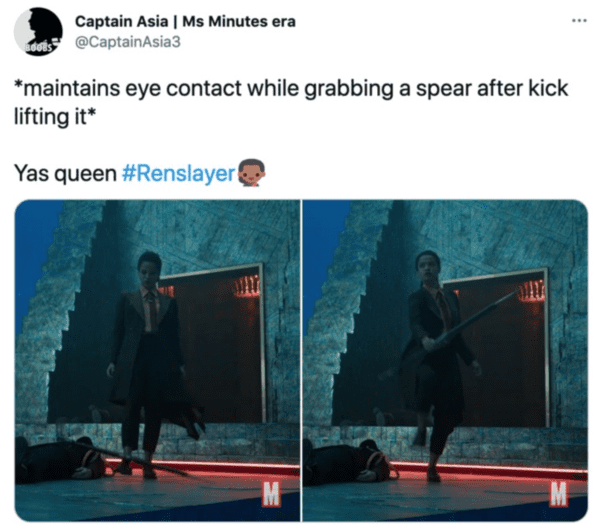 Originally appearing in the comic books, this version of Renslayer is a judge for the TVA who Loki doesn’t want to mess with.

10. Best Hair in the Marvel Universe 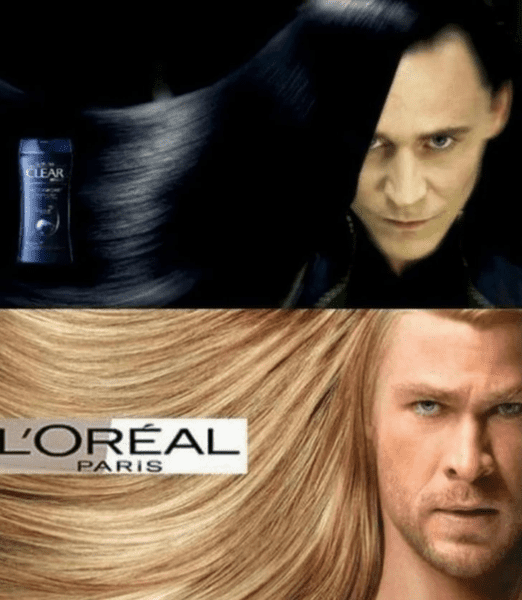 These two should definitely have their own hair product endorsement deal. Best hair in the Marvel Cinematic Universe. 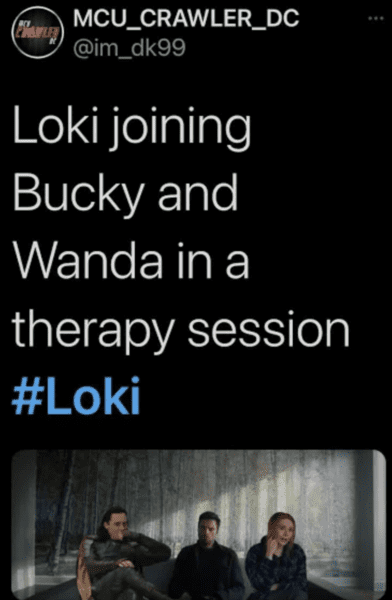 Loki, Wanda Maximoff, and Bucky Barnes could certainly do with some therapy after what they have all been through. 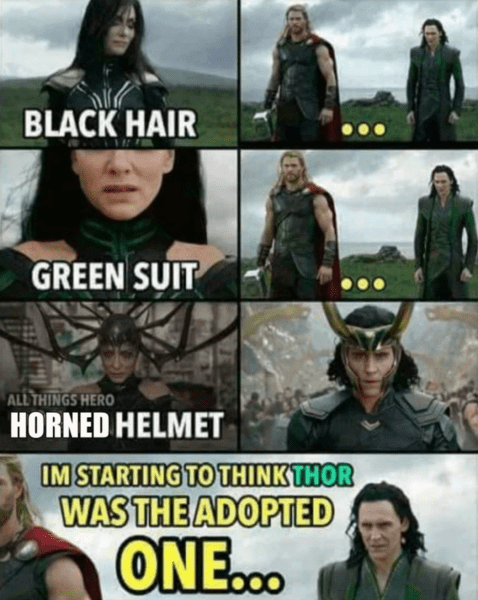 When the clues start to point toward the character of Thor being the adopted one. 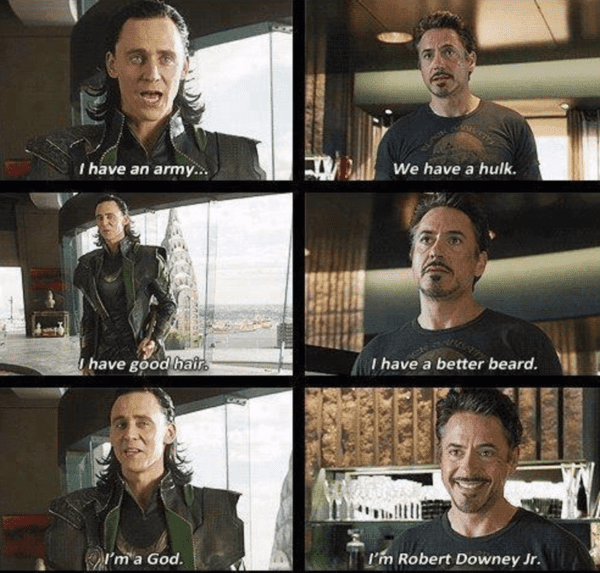 When Loki and Tony Stark (Iron Man) try and outdo each other. 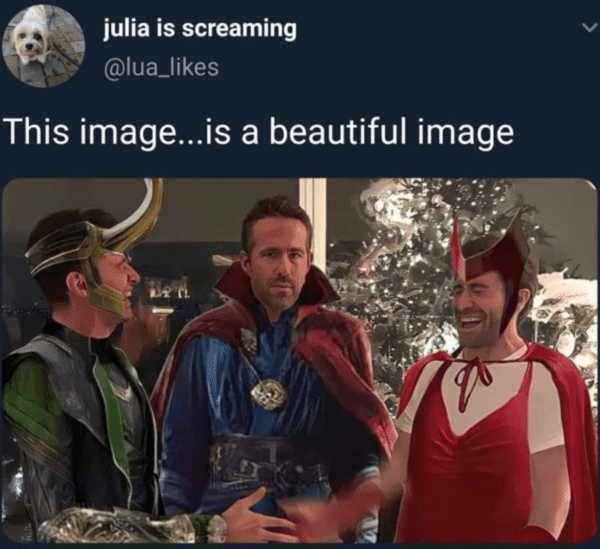 A few years back a photo circulated of Hugh Jackman and Jake Gyllenhal pranking Ryan Reynolds by inviting him to a Christmas party and telling him to wear a Christmas sweater. He showed up in one when nobody else did. This photo has been tweaked for the MCU, with Jackman as Loki and Gyllenhal as Wanda laughing at poor old Ryan Reynolds as Dr Strange. Classic. 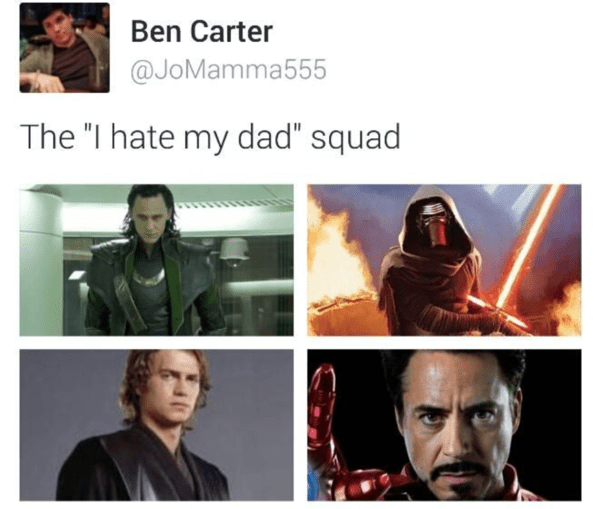 This Star Wars/MCU crossover features those with daddie issues. 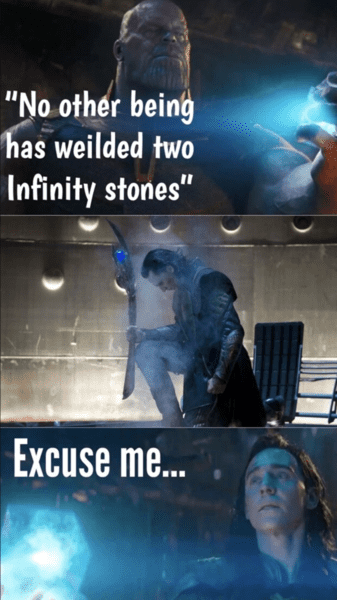 While Thanos would like to think he is the only one to have more than two Infinity Stones in his possession, little old Loki has also achieved that feat. Sure, he didn’t use either Infinity Stone at the same time but he still held them, so that counts. 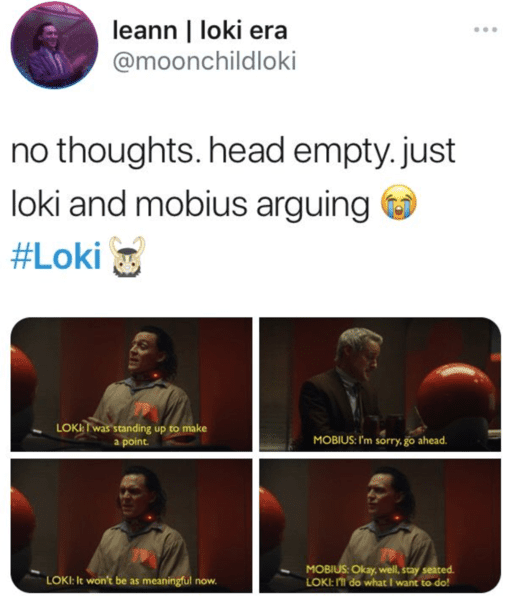 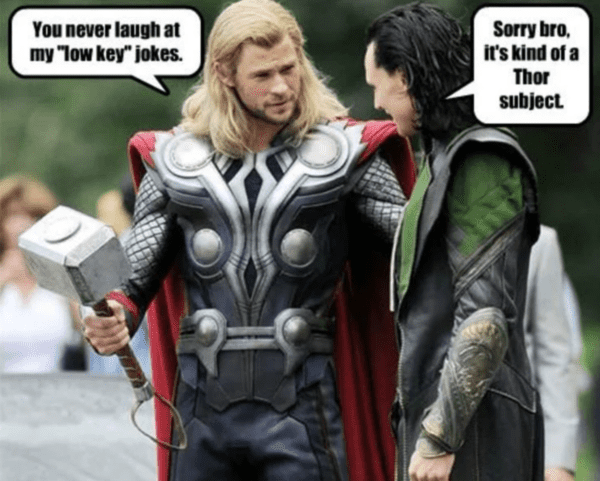 This one needs no explanation. Fans are sure to enjoy this meme that doesn’t provide any spoilers for the series.

19. What About the Avengers? 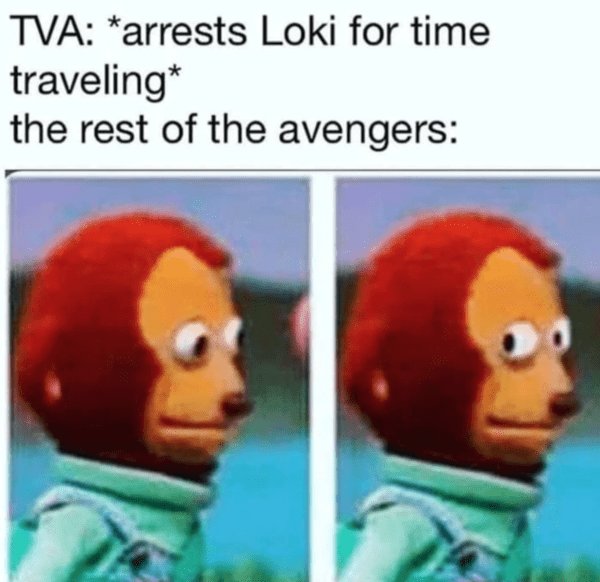 When the TVA conveniently forgets to look for The Avengers and goes straight after Loki. 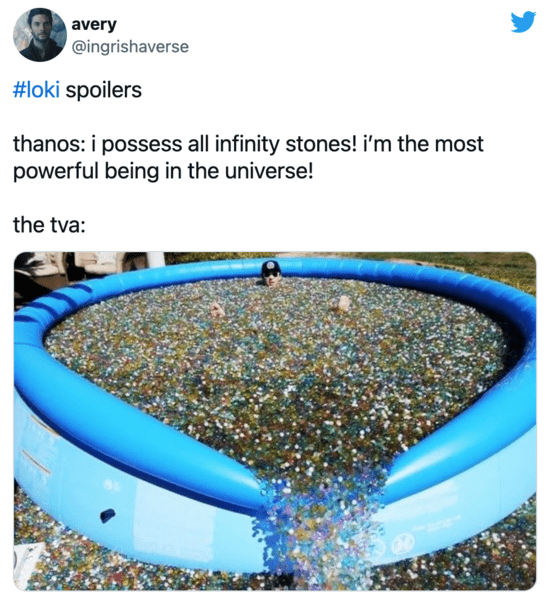 When you find out how powerful the TVA really is.