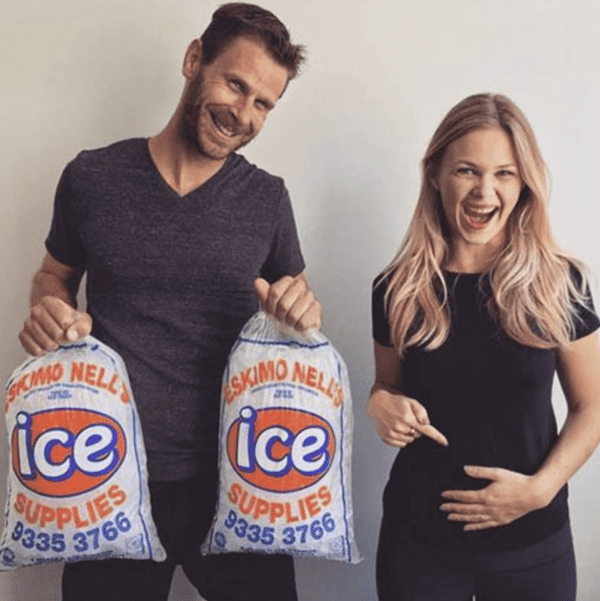 23 Funny Pregnancy Announcements That Will Have You Giggling

Having a baby is a beautiful moment but also a significant responsibility. There are a lot of things that parents need to do when expecting. But parents must complete one crucial task before rushing out to buy parenting books, a crib, baby shoes, and diapers. Yes, they have to announce to the world that they’re pregnant. Honestly, it’s the best part of having a child. Everything goes downhill from there. No ordinary or plain pregnancy announcement will do in this day and age. The only way to go is with funny pregnancy announcements.

23 Funny Pregnancy Announcements That Will Have You Giggling 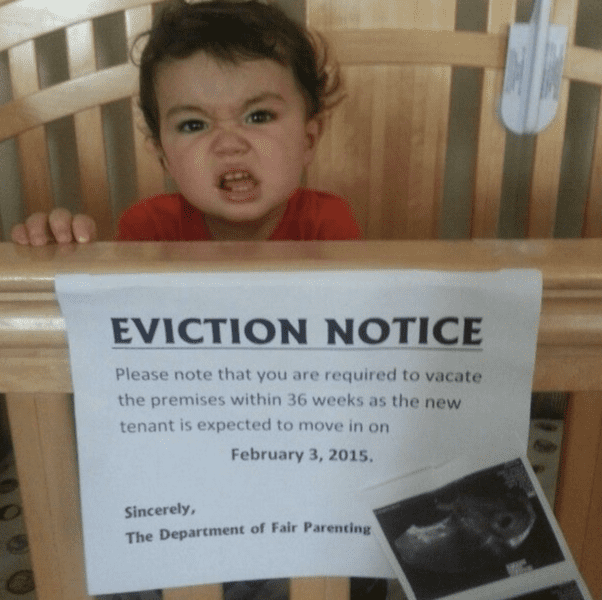 Here’s one of the funniest pregnancy announcements involving the first child. Parents expecting their second child often show more sense of humor the second time around. However, their first child usually doesn’t think it’s funny that they’re getting kicked out of their crib. 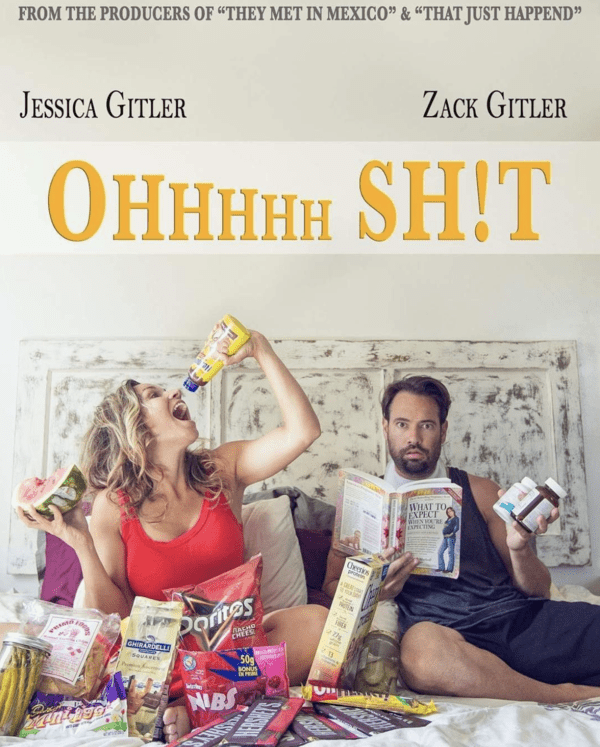 Funny movie posters are a creative and charming way to announce a pregnancy. Jessica and Zack Gitler raise the bar with this incredible fake movie poster, Oh Sh!t. Obviously, the plot revolves around Jessica and Zack’s relationship and future baby. He freaks out while she goes to town on a bag of Doritos.

The awesome pregnancy announcement idea also features nice little touches, such as this actually being the third movie in the Gitler trilogy following They Met In Mexico and That Just Happened. 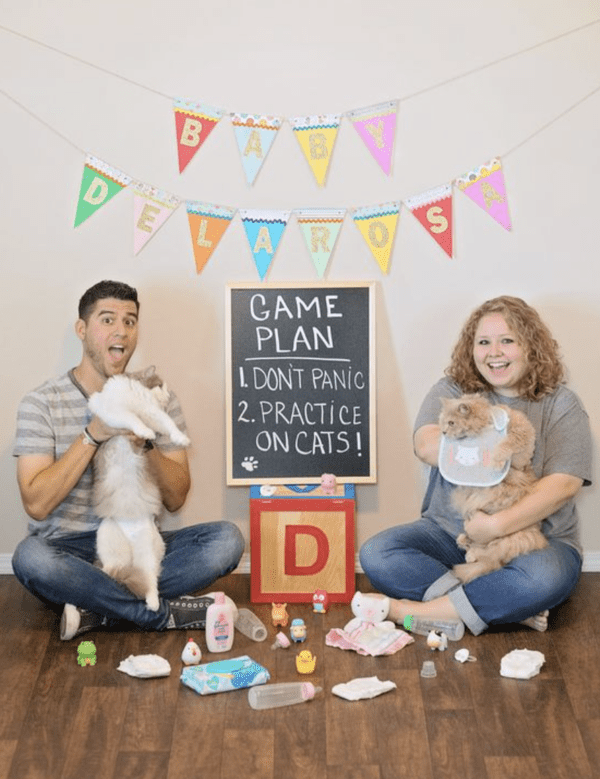 First-time parents might feel overwhelmed with all the advice and stuff that comes with having a child. No matter how many books they read, it still won’t prepare them for the responsibility. Well, it might be a good idea to get in some practice before the baby arrives.

Some couples practice with their cats or dogs first. It allows future parents to experience parenthood. The only problem is cats won’t talk back when they grow up. They’ll just scratch your eyes out. 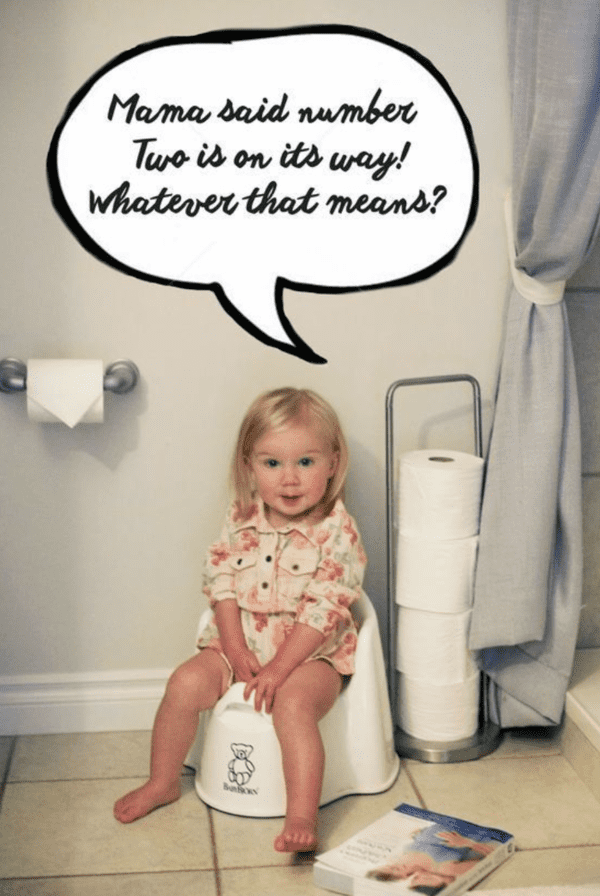 It’s always nice to see a big sister getting to announce her first sibling. It keeps the big sister involved in the significant change occurring in the family. The going number two announcement allows parents to brag about having a potty-trained kid too.

Soon the big sister will be teaching her little sibling about the benefits of going potty. It’s easily one of the funniest pregnancy announcements on this list. 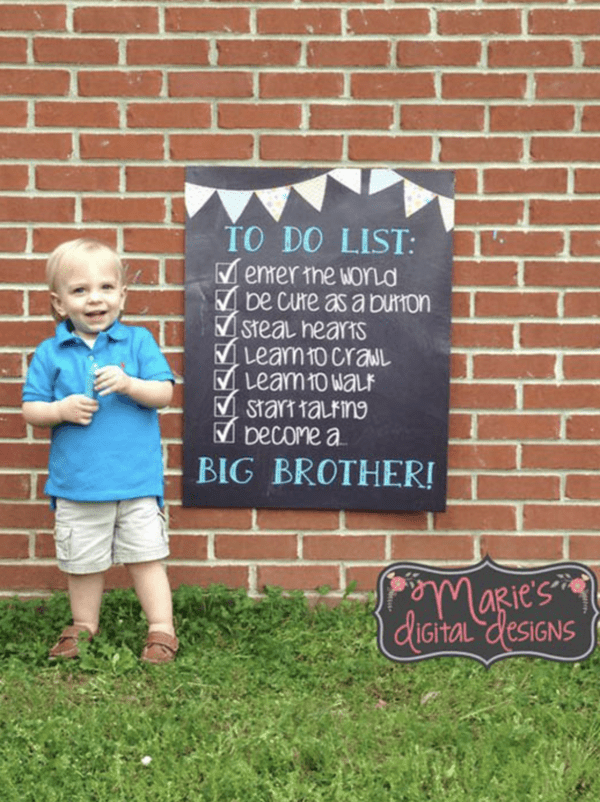 Sometimes, the simplest and cutest pregnancy announcements are the best way to go. Additionally, letting big brother break the news just increases the cuteness. Hence, both kids get a chance to get all the attention.

It’s a simple announcement to pull off with a memory that lives forever. All it takes is having a cute child and a hilarious list in the background.

The best baby announcements always include 90s references that the future little one will never understand. Most parents go for silly and obvious pregnancy announcements, but sly and cryptic messages are just as good.

The fun with these messages is seeing who can figure it out first. For example, simply pose next to your husband and have him hold two bags of ice. You’ll get a lot of Vanilla Ice jokes before everyone puts two and two together and realizes you are announcing your pregnancy. 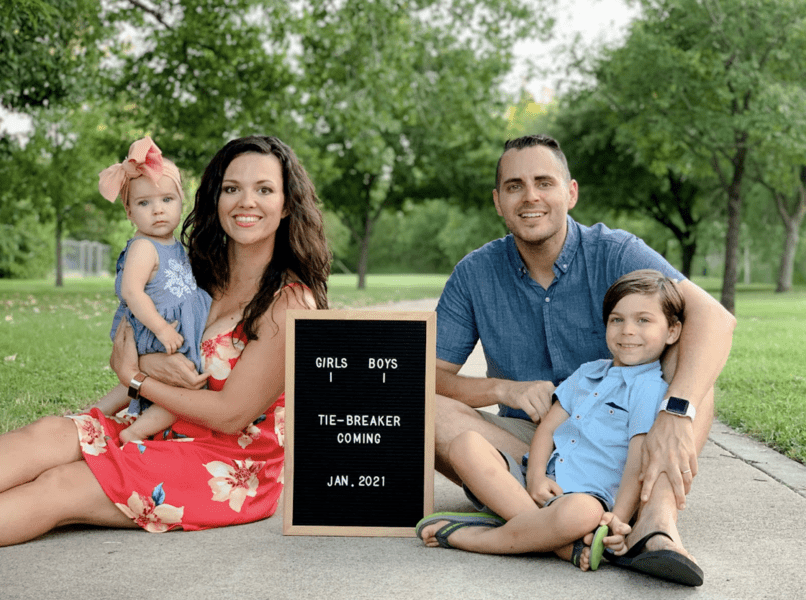 With each pregnancy announcement, parents become more creative. Despite being seasoned veterans, no parent is ready for baby number three. Some parents get a boy and a girl on their first two tries. That means the household is split even with two guys and two gals.

The tiebreaker announcement involves the whole family and a cliffhanger. One side will win and the other will quietly lose. These parents might be excited to see which gender ends up winning. In the end, they both lose since there are more kids than parents. This is one way to make a birth announcement. 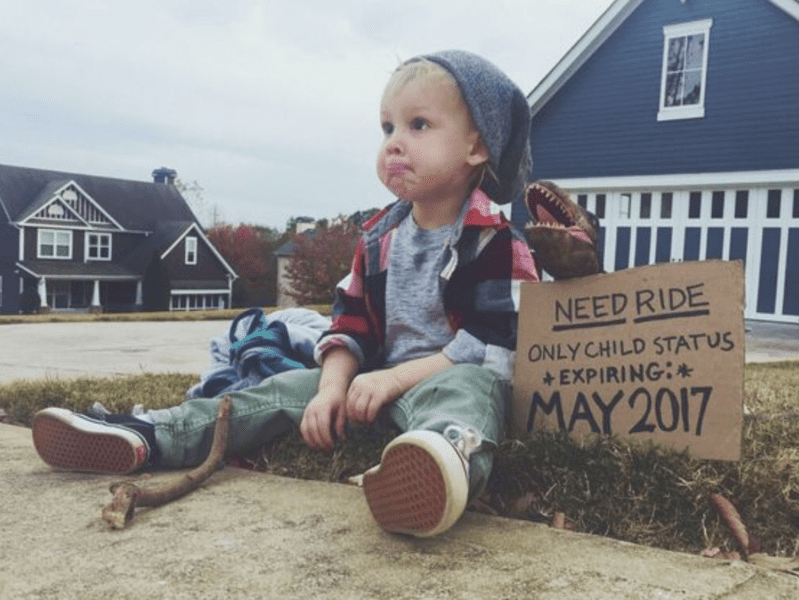 The only child is often the king or queen of the household. They don’t have to share any toys with anyone and get all the attention. That’s why the need a ride baby announcement is perfect for introducing the second child. It’s a funny idea that is simple to put together. All it requires is the first kid and a simple sign announcing the second baby’s arrival.

Bonus points if the first kid is already in a horrible mood. It’s one of the funniest ways to announce the good news.

10. Coming Soon To a Kitchen Near You 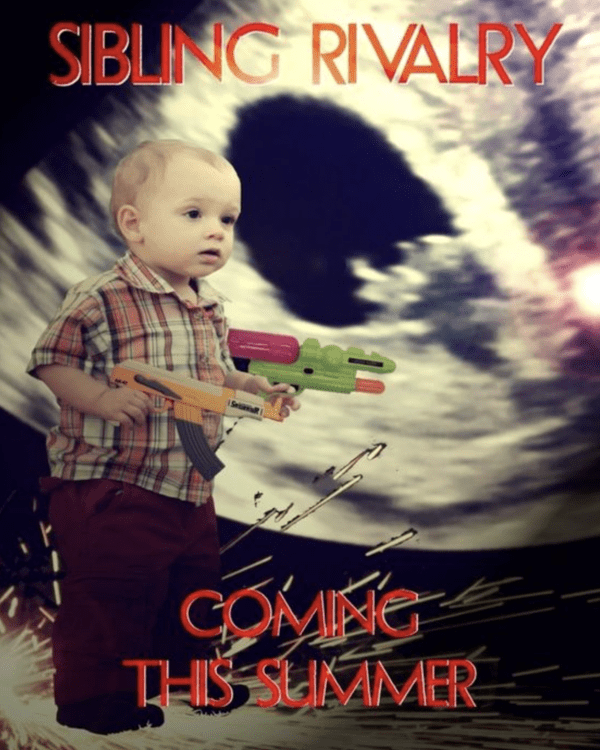 In Sibling Rivalry, the big brother prepares to battle with baby number two. They’ll fight over toys, food, and their parent’s attention. It all leads to an epic battle of screaming and crying. Although it won’t be long until they begin to understand each other like Superman and Batman.

They’ll need to put their differences aside as they team up against the newest threat to their toys in Sibling Rivalry II: New Baby in Town. 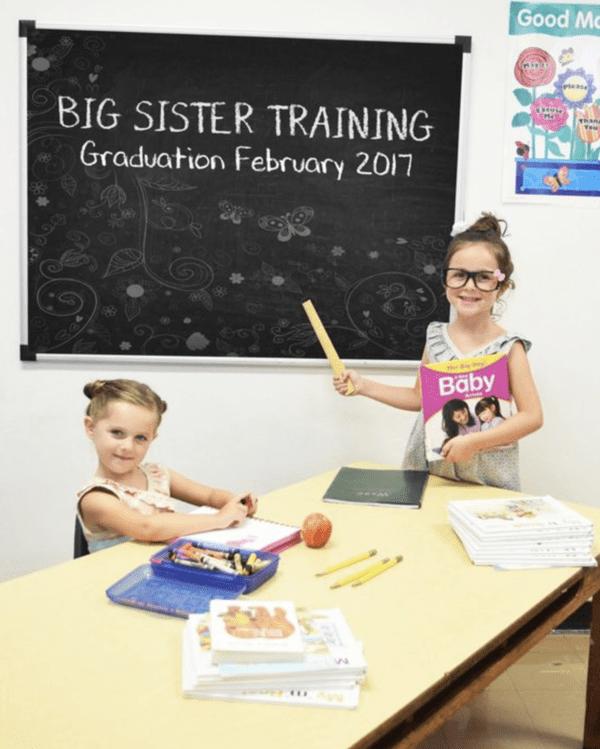 Including the older siblings in the pregnancy announcement is always a good idea. The eldest child has spent years training sister number two for the day the little one arrives. Furthermore, the big sister training announcement is cute, funny, and creative.

It’s easily one of the cutest baby announcements on social media.

See more about - 120 Funny Family Quotes Everyone Can Relate To 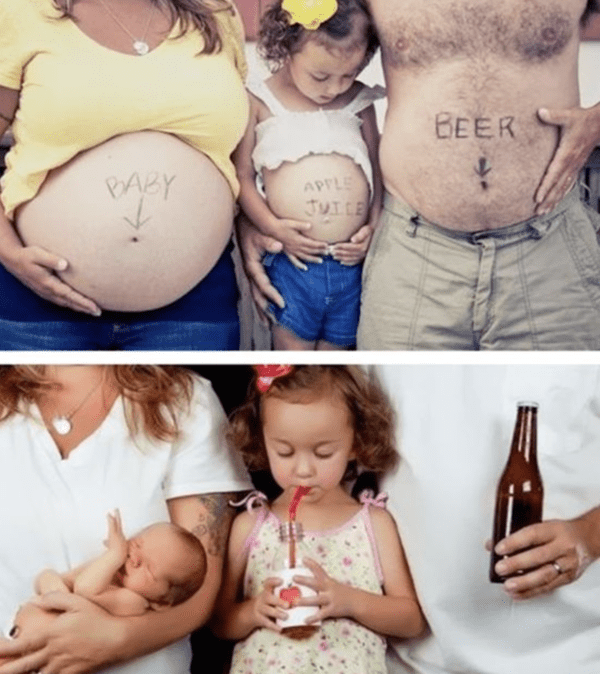 A simple pregnancy announcement is sometimes the funniest type. For instance, there’s no need for photoshop, special effects, or a witty caption. Simply have everyone in the family write on their stomach the contents of their belly.

Mom has a baby in her belly, dad has beer, and the little one’s full of apple juice. This is one of the most creative pregnancy announcements. 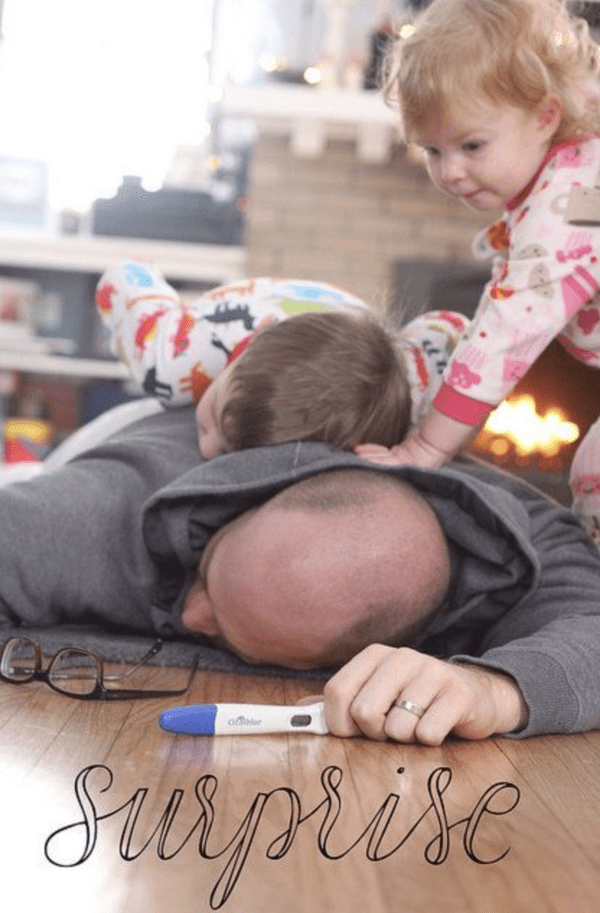 A passed-out father holding the pregnancy test with two kids crawling on him is the only way to make that announcement. It’s easily one of the funniest ways to announce a pregnancy. 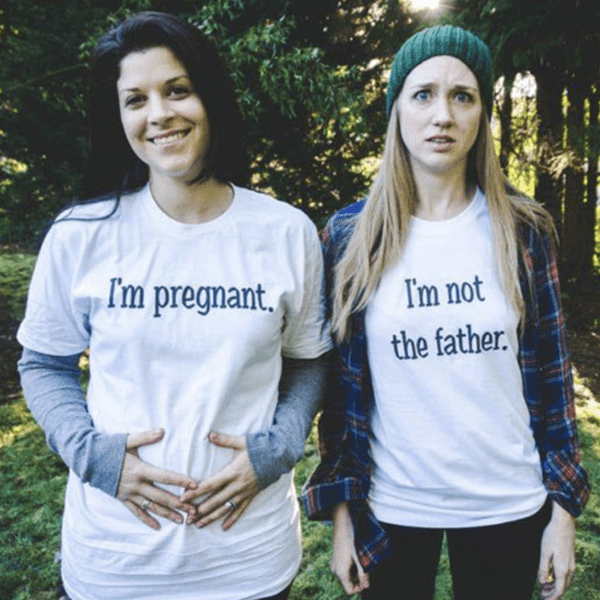 There are several good ways to make a pregnancy announcement. The “I’m not the father” announcement is ideal for same-sex couples. It’s also simple, funny, and doesn’t require spending a lot of money. However, it’s still a creative and brilliant idea.

This same-sex couple proves that sometimes an old joke with a twist is the way to go. Funny pregnancy announcement ideas don’t get much better. 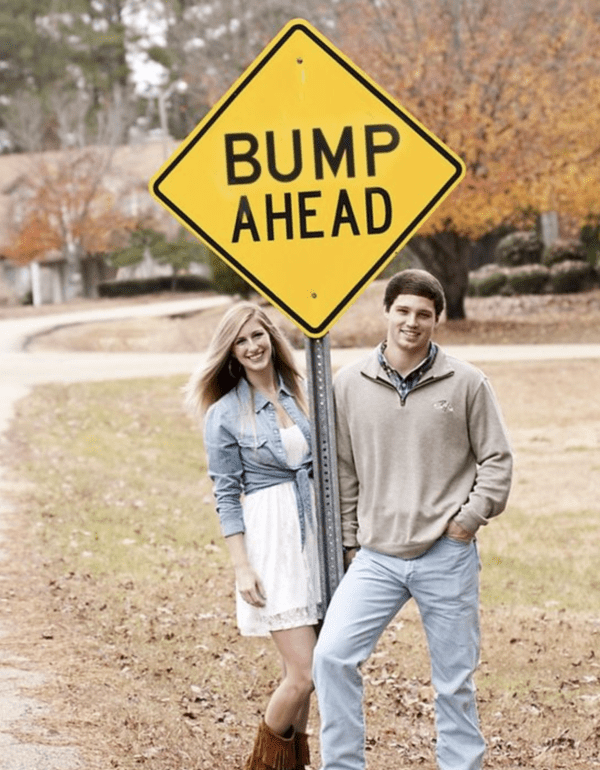 Not all couples want to make a grand announcement that goes viral. A simple yet creative approach is always a winner. Simply find the perfect road sign and pose. Like this couple found the ideal sign to help make their major announcement.

They don’t need to say anything and just let family and friends figure it out. The baby bump pregnancy announcements will always get a laugh. 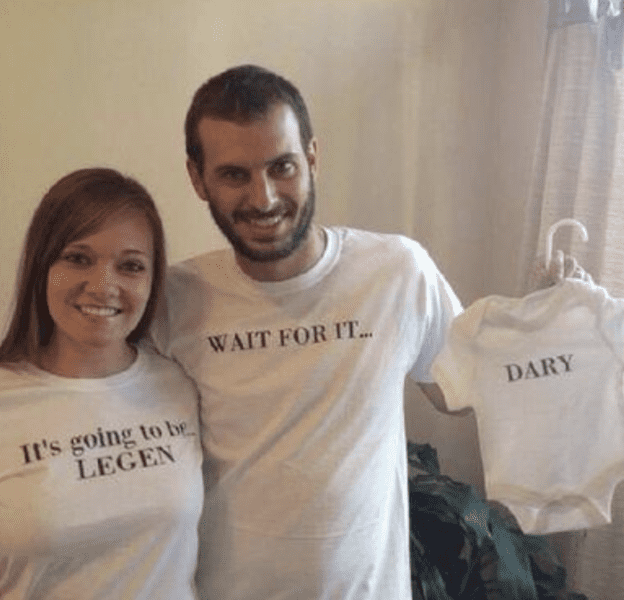 When looking for pregnancy announcement ideas, look no further than How I Met Your Mother. The critically acclaimed series revolved around love, marriage, and starting a family and is chock-full of ideas. 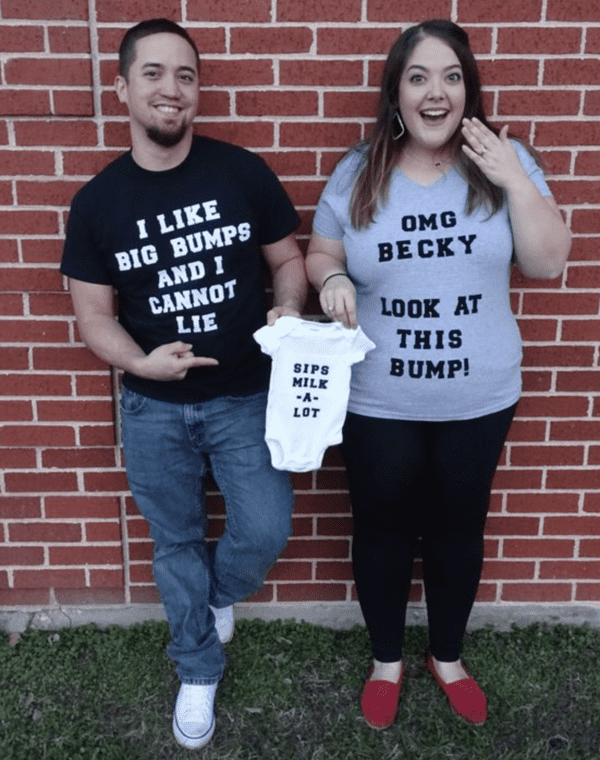 Everyone loves a good pun. That’s why a pun is perfect for any baby announcement. Throw in some Sir Mix-A-Lot to turn every baby shower and gender reveal into a wild celebration. All it takes is making t-shirts featuring lyrics from a classic Sir Mix-A-Lot track.

This is one of those cute pregnancy announcement ideas everybody can get around. The future Sips Milk-A-Lot is lucky to have parents that have good taste in music. 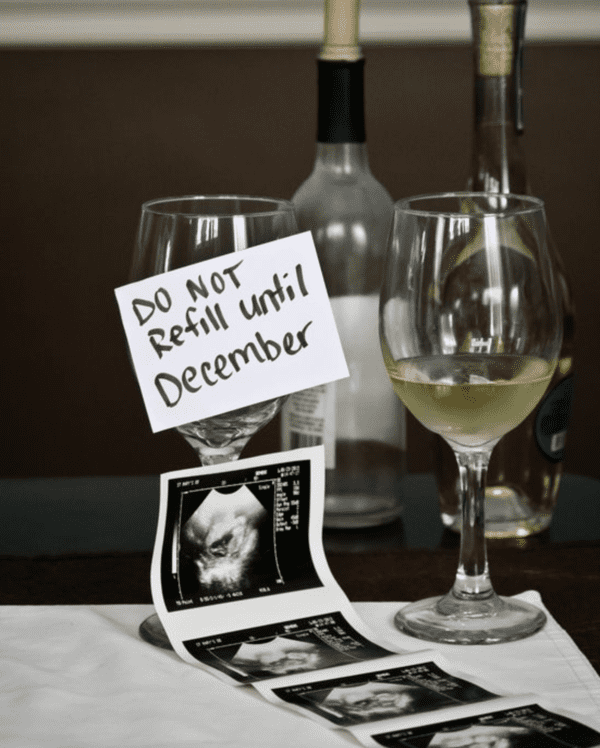 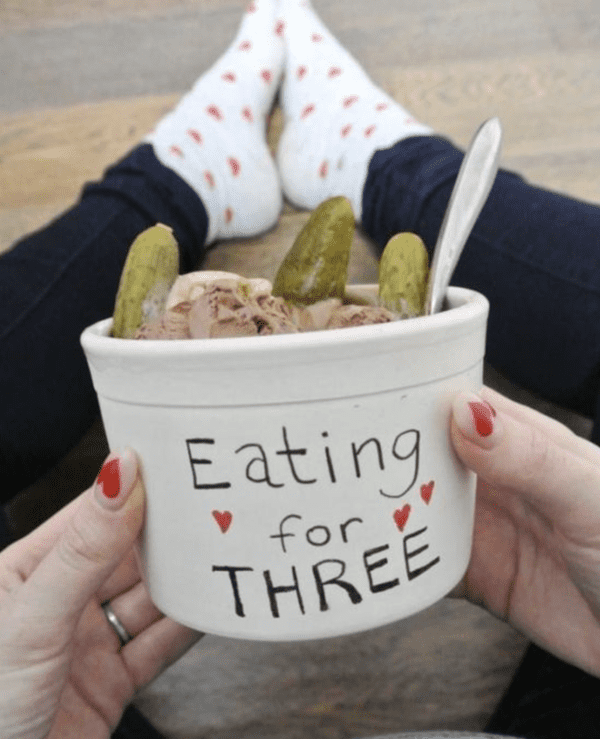 Having twins can be exciting and scary all at the same time. Parents need to get double everything to prepare for the big day. It also means the pregnancy announcement needs to be twice as funny.

The eating for three baby announcement is a play on the classic phrase “eating for two.” Not everyone will get the joke right away, but they’ll soon celebrate the big news. 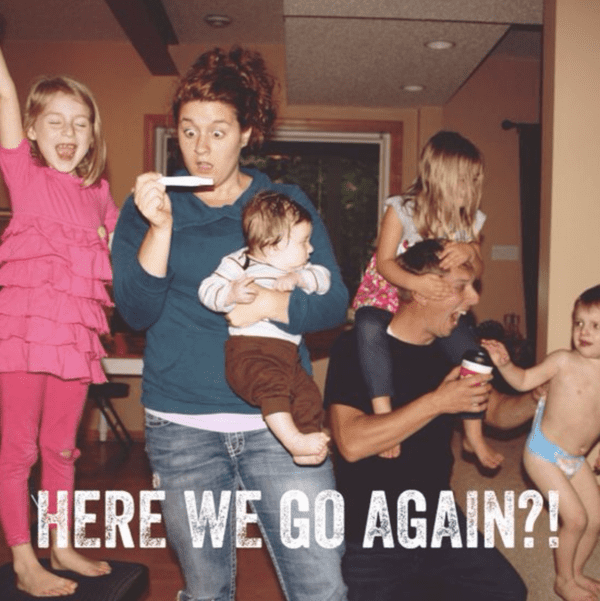 The cute, sweet, and loving pregnancy announcements go out the window when baby number five is on its way. With four kids of various ages, the fifth kid is when parents get creative and honest. They don’t even care if everyone knows about their chaotic family life.

All we have to say is good luck baby number five. Regardless, this is one of the funniest pregnancy announcements. 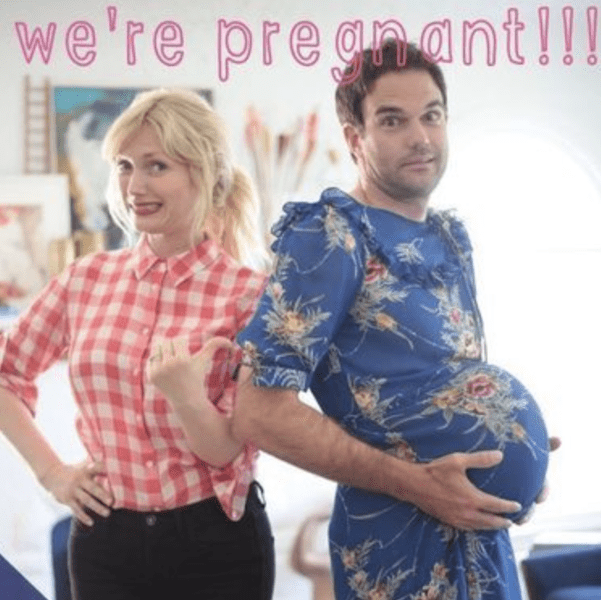 With the rise of social media, everyone announces their pregnancy in a funny or creative way. The funniest couples always find a way to raise the bar. For instance, maybe try switching gender roles for the big announcement.

At least for the announcement, make the husband know what the wife’s life will be like for the next nine months. Wives could always take it one step further and make him carry the watermelon around for nine months.

22. Eating for Two and Drinking All Night 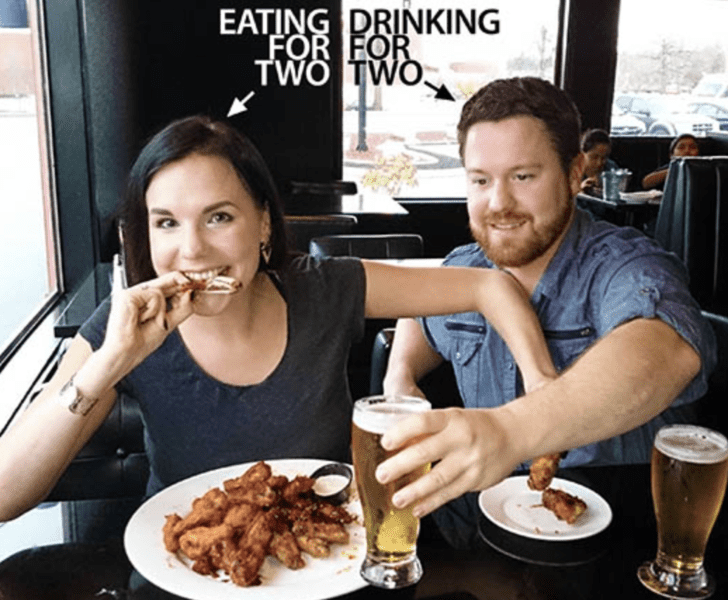 There are a few classic pregnancy announcement jokes that never get old. For instance, the eating for two joke will always get a laugh and is a cute way to reveal the pregnancy. Many couples often find a way to add a little twist.

In this case, the wife eats for two while the husband drinks for two. A faithful, loving husband will drink an extra drink every night for the woman he loves. 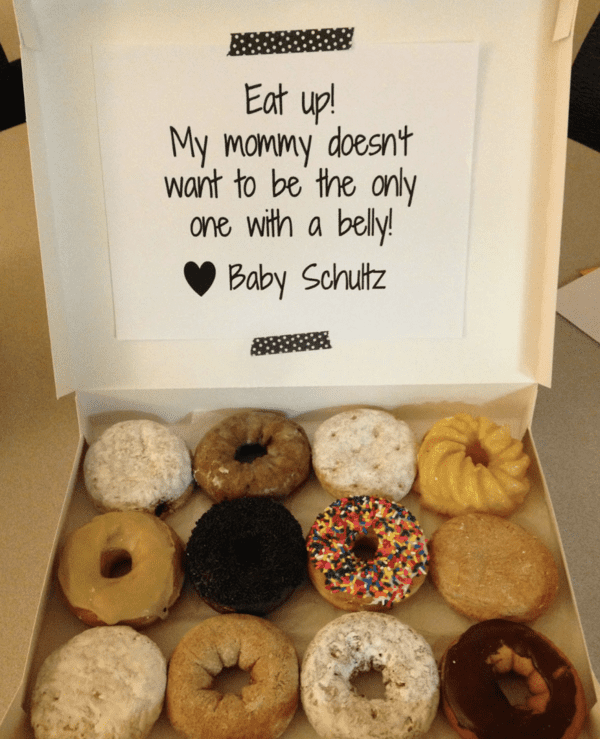 There’s one type of pregnancy announcement that trumps all other kinds. That’s an announcement involving food. In fact, there’s no better way to break the news to family, friends, or co-workers. It’s actually a good idea to give co-workers food while making the announcement. That way, they won’t think about the maternity leave and extra workload they gain.

It’s also one of the simplest ways to reveal the good news. All it takes is a note and a box of delicious donuts.

See more about - 11 Hilarious Senior Pranks To Try Before Graduation