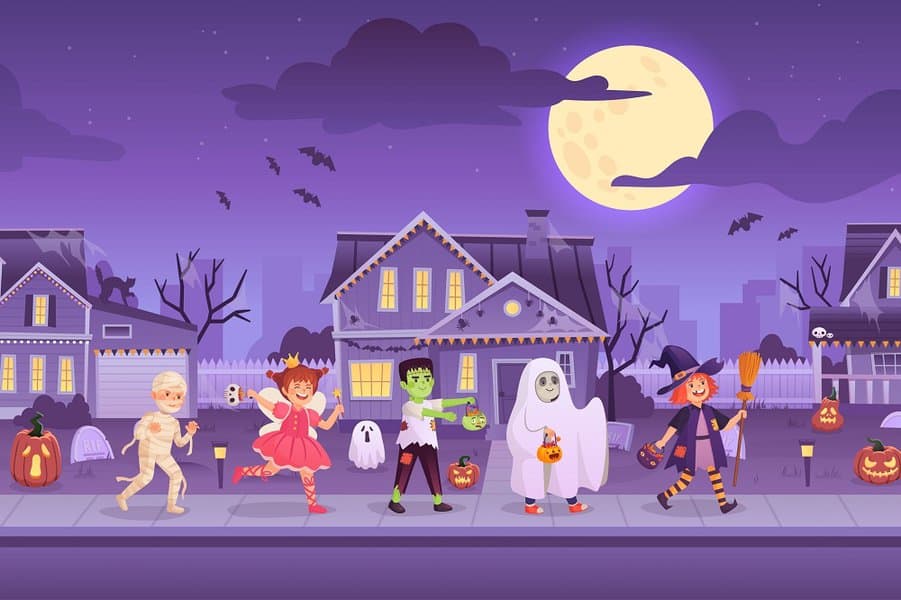 Halloween is right around the corner. The favorite holiday of many, it’s the one time when it’s acceptable for strangers to give children candy and when you can dress up as a serial killer and binge-watch horror movies without feeling guilty. Generally a time for frights and scares, Halloween can also be a time of great laughter. One way to have everyone chuckling is by telling Halloween jokes.

Whether you’re telling corny Halloween jokes about Count Dracula, a zombie attack or a spooky Halloween joke about ghouls and haunted houses, jokes based around October 31st will have all your family and friends cracking up. If you need some help with your joke telling, we have collected a bunch of the best Halloween jokes for you to tell at the end of the month. 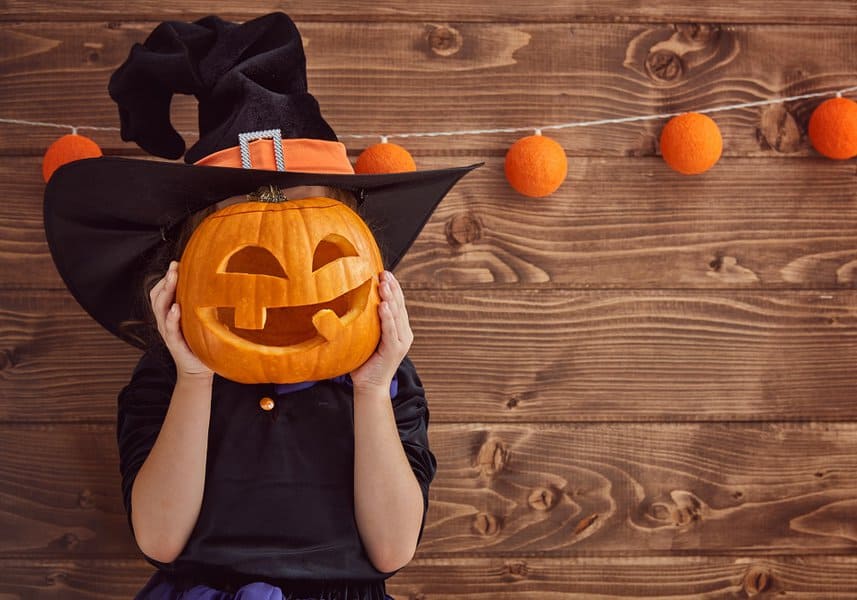 We’ve written a lot about witches, from the best movies featuring them to famous witches throughout history. So it only makes sense we include some witch jokes in this list of funny Halloween jokes. Go cast some spells with these great gags.

1. What is a witch’s favorite class? Spelling!

2. How does a witch know the best time to go trick or treating? She checks her witch watch.

3. What do you call a witch’s garage? A broom closet.

4. What do witches use on their hair? Scare-spray.

5. What sound do witches make when they eat cereal? Snap, Cackle & Pop!

6. What makes trick or treating with twin witches so challenging? You never know which witch is which!

7. Why didn’t the mom let the little witch go trick or treating with her friends? She was ex-spelled from school.

8. What do you call two witches trick or treating together? Broommates.

9. What do witches put on their bagels? Scream cheese.

10. Why do witches stay in 5-star hotels? Because of the excellent broom service.

11. What happened to the witch with the upside-down nose? She blew her hat off every time she sneezed.

12. What game do witches play on Halloween? Hide and ghost seek.

14. Where does the boogie man pick up witches? In the broom closet.

15. What do the fastest witches use to get around? Vroomsticks. 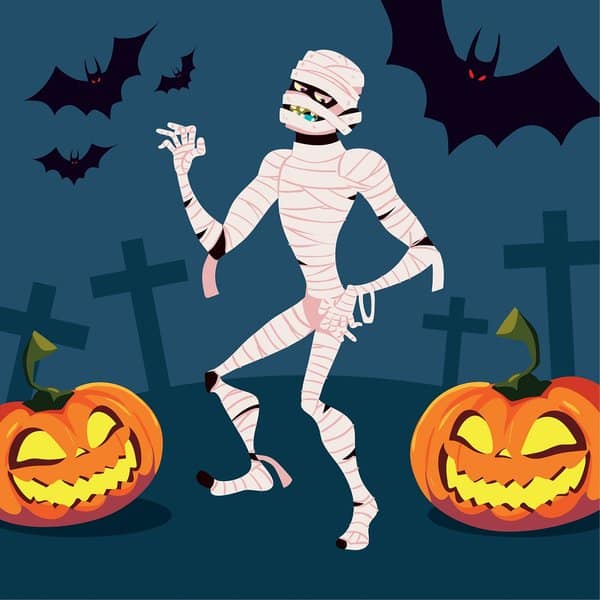 Wrapped up in bandages, mummies are a classic horror character that makes a great costume for Halloween. They are also the subject of some hilarious jokes that you will discover below.

16. What do you call Ryan Gosling in a mummy costume? Ryan Gauzeling

17. Why didn’t the mummy have any friends? He was too wrapped up in himself.

18. What kind of music do mummies like listening to on Halloween? Wrap music.

19. Why don’t mummies take time off? They’re afraid to unwind.

20. Where does a mummy go on vacation? The Dead Sea.

21. Why did the headless horseman go into business? He wanted to get ahead in life.

22. Why couldn’t the mummy go to school with the witch? He couldn’t spell.

23. How do mummies tell their future? They read their horror scope.

24 What do you call a mummy covered in chocolate and nuts? A Pharaoh Roche.

25. What is the most important day in Egypt? Mommy day. 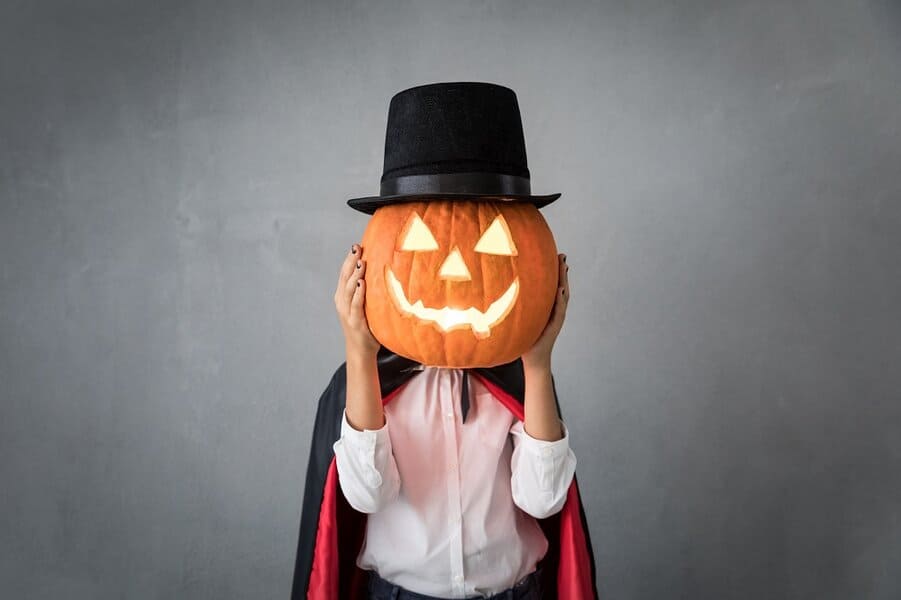 Vampires came back into the spotlight when Twilight took the movie world by storm. While the vampires in the movie franchise aren’t your typical bloodsuckers, they helped make vamps popular again. This is evident by the number of vampire jokes there are.

26. What was the first thing Count Dracula wanted to see when he went to New York? Vampire State Building.

27. How do vampires get around on Halloween? On blood vessels.

28. What can you catch from a vampire in winter? Frostbite.

29. What’s it called when a vampire has trouble with his house? A grave problem.

30. How can you tell when a vampire has been in a bakery? All the jelly has been sucked out of the jelly doughnuts.

31. What would be the national holiday for a nation of vampires? Fangs-giving!

32. Why didn’t the vampire attack Taylor Swift? Because she had bad blood.

33. What’s it like being kissed by a vampire? It’s a pain in the neck.

34. Why did the vampire read the newspaper? He heard it had great circulation.

35. What is a vampire’s favorite fruit? A blood orange. 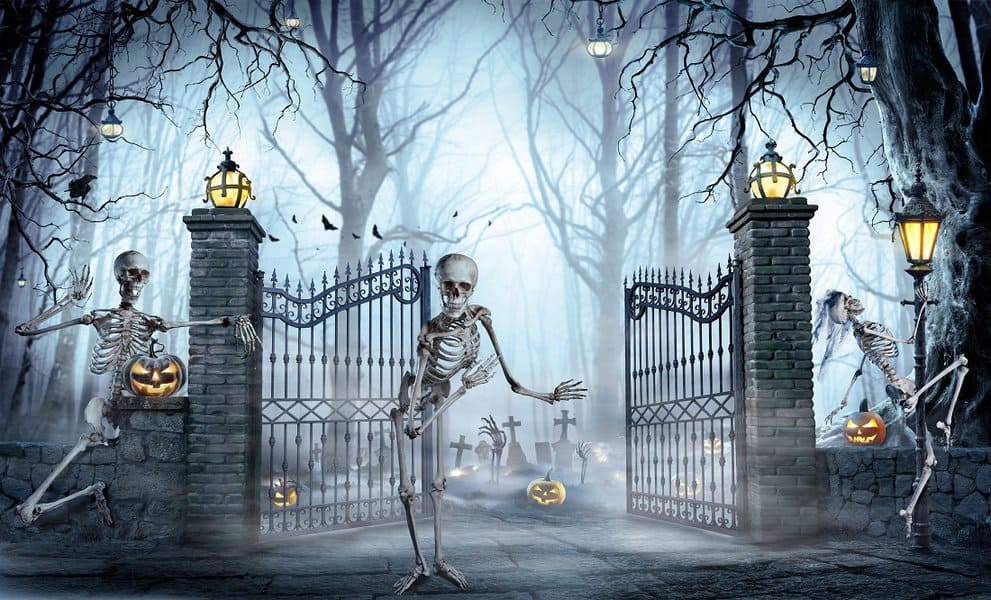 Yep, even skeletons get a look in when it comes to funny Halloween jokes. These jokes all play on the boney skeleton stereotype and will provide a few giggles.

36. The skeleton couldn’t help being afraid of the storm. He just didn’t have any guts.

38. Why are skeletons so calm? Because nothing gets under their skin.

39. Why can’t skeletons play church music? Because they have no organs.

40. What do you call a skeleton who goes out in the snow? A numb-skull.

41. What does a skeleton order at a restaurant? Spare ribs.

42. How do you make a skeleton laugh? You tickle his funny bone!

43. What do you call a skeleton who rings the doorbell? A dead ringer.

44. Why did the skeleton go to jail? Because he was bad to the bone.

45. Did you hear about the skeleton who dropped out of medical school? He didn’t have the stomach for it. 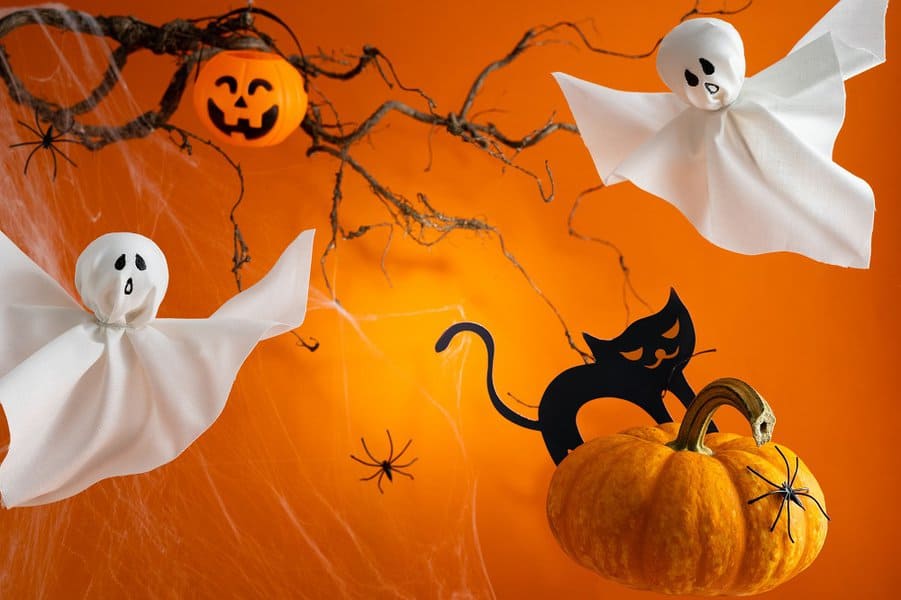 Have a happy Halloween by telling these funny ghost jokes. Ghosts can be anything from evil spirits looking for revenge to friendly apparitions like Casper.

46. Why do ghosts love going to Six Flaggs? Because they can ride lots of roller-ghost-ers.

47. What is a ghost’s favorite meal? Spook-ghetti.

48. What do ghosts wear when their eyesight gets blurred? Spooktacles.

49. Who did the scary ghost invite to his party? Any old friend he could dig up!

50. What do you get when you cross Bambi with a ghost? Bamboo.

51. Why do ghosts make the best cheerleaders? Because they have spirit.

52. Why do girl ghosts go on diets? So they can keep their ghoulish figures.

53. How do ghosts search the Web? They use ghoul-gle.

54. What is a ghost’s favorite dessert? Ice-scream!

55. Why did the baby ghost cry? He missed his mummy. 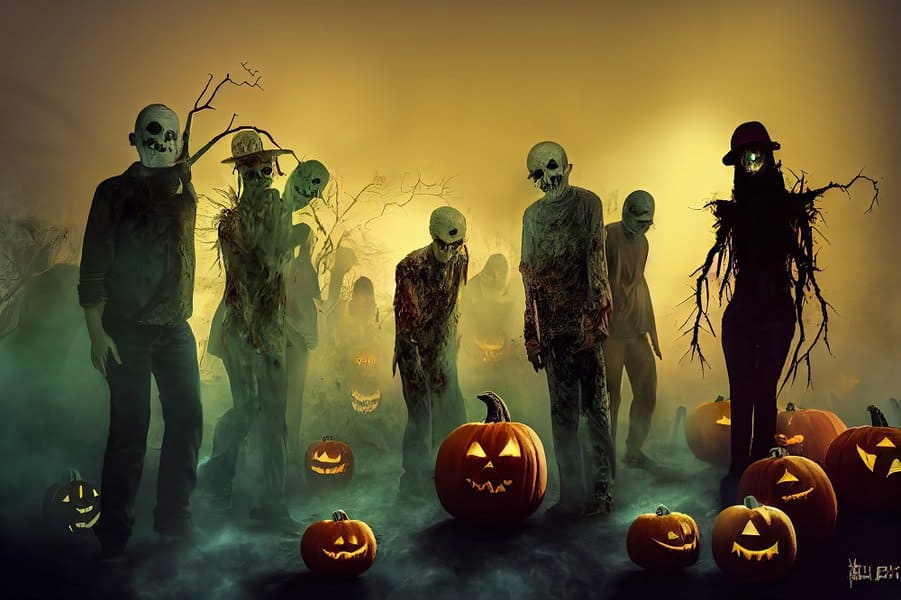 Like vampires, zombies have become a big part of modern pop culture. You can thank The Walking Dead. There are lots of great zombie jokes with some of the best collected below for you to enjoy.

58. Why didn’t the zombie go to school? He felt rotten.

59. Why are zombies never arrested? Cause they can never be taken alive!

60. What is a zombie sleepover called? Mass grave!

62. What is a zombie s favorite language? Latin, because it is a dead language.

63. Why was the zombie comedian boo-ed off stage? Because most of the jokes he said had gone bad.

64. Why didn’t the zombie cross the road? Because it did not have the guts to walk.

65. What shampoo does a zombie wash his hair with? Head and Shoulders! 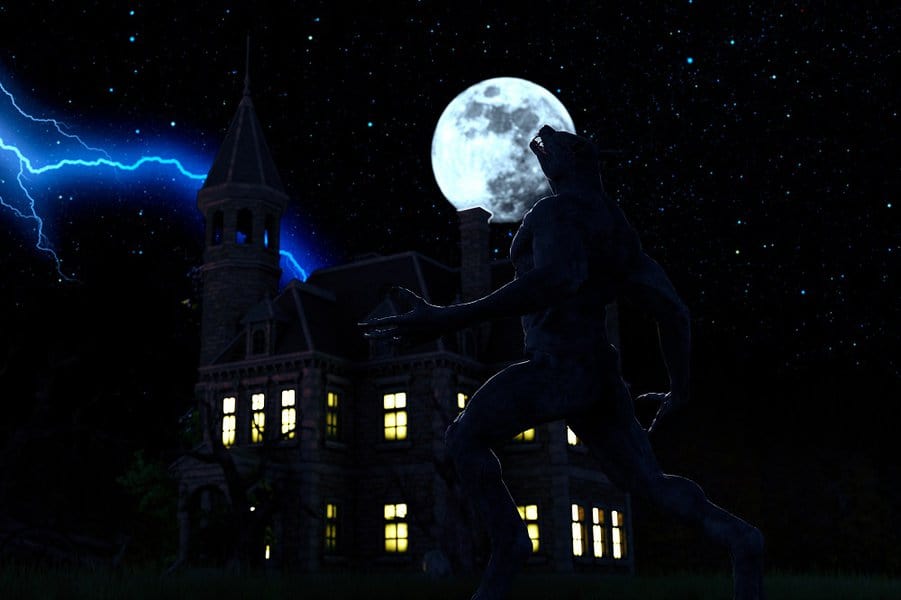 When creating a list of the best Halloween jokes, you have to include funny remarks about werewolves. These hairy creatures might be super scary in movies and literature, but they are also very funny and feature in lots of great jokes.

66. Why did the werewolf go to the dressing room when he saw the full moon? He needed to change.

67. Who are the werewolf’s cousins? The what-wolf and then when-wolf.

68. What do you call a sleeping werewolf? An unaware-wolf.

69. When do werewolves go trick or treating? Howl-o-ween.

70. What did the werewolf eat after getting his teeth cleaned?  The dentist.

71. What’s a werewolf’s favorite day of the week? Moonday.

72. What happened when the werewolf swallowed a clock? He got ticks.

73. Why was the werewolf arrested at the butcher’s shop? He was caught chop-lifting.

74. Did you hear about the comedian who entertained at a werewolves’ party? He had them howling all night.

75. Where are werewolf movies made? Howl-lywood. 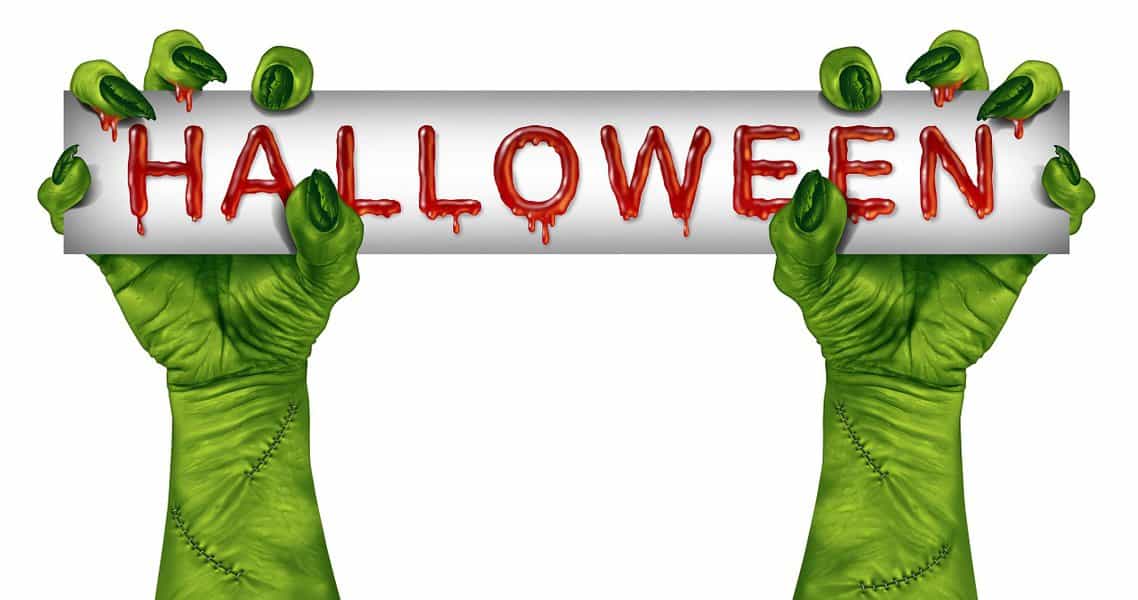 Monsters can be all sorts of different creatures from the supernatural and paranormal world to mythical beasts from history. They can also be the butt of some pretty funny jokes.

76. What kind of monster is the best dancer? The boogieman.

78. What goes “Ha-ha-ha-ha!” right before a gigantic sounding crash and then keeps laughing? A monster laughing its head off!

79. Why can’t Frankenstein fly? He can never make it through the metal detector.

80. What game do monsters play? Hide and go shriek.

82. Where can a monster get a tattoo? At Monster’s Ink.

83. What is the best thing to give a seasick monster? Plenty of room

84. How can you tell if there is a monster in our fridge? You can’t close the door.

85. What do you do with a green monster? Wait until it’s ripe. 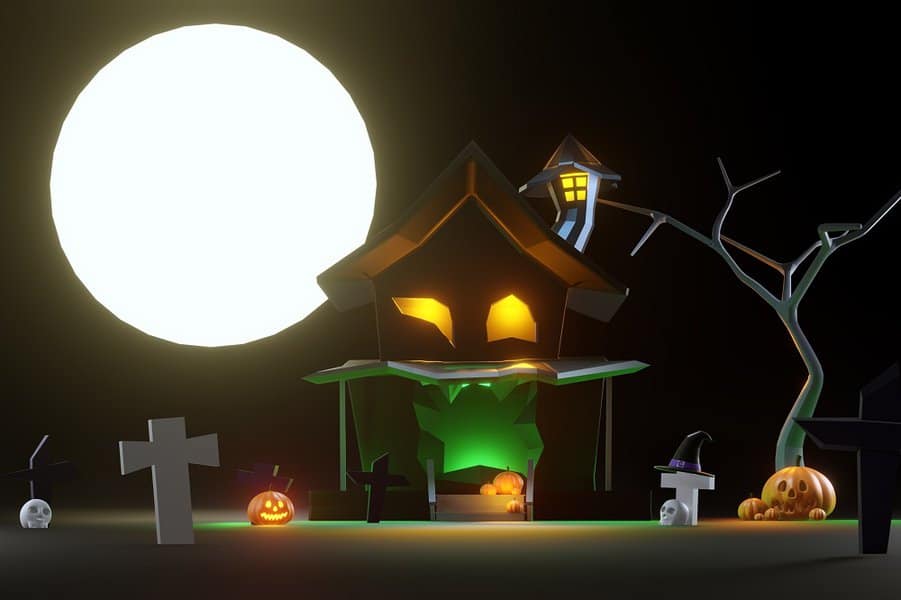 Here are the best of the rest. These jokes cover all types of Halloween-related subjects and creatures. While some are a bit random, they are all very funny.

86. Why didn’t the coffee bean go to the Halloween party? Because it was grounded.

87. What do you call a chicken that haunts your house? A poultrygeist.

88. Why are there fences around cemeteries? Because people are dying to get in.

89. What has hundreds of ears but can’t hear a thing? A cornfield!

90. Where is the best place to party on Halloween? The g-RAVE-yard.

91. What goes around a haunted house and never stops? A fence.

92. Why did the Headless Horseman get a job? He was trying to get ahead in life.

93. What is a recess at a mortuary called? A Coffin Break!

94. Why is a cemetery a great place to write a story? Because there are so many plots there!

95. What happened to the cannibal who was late to dinner? They gave him the cold shoulder. 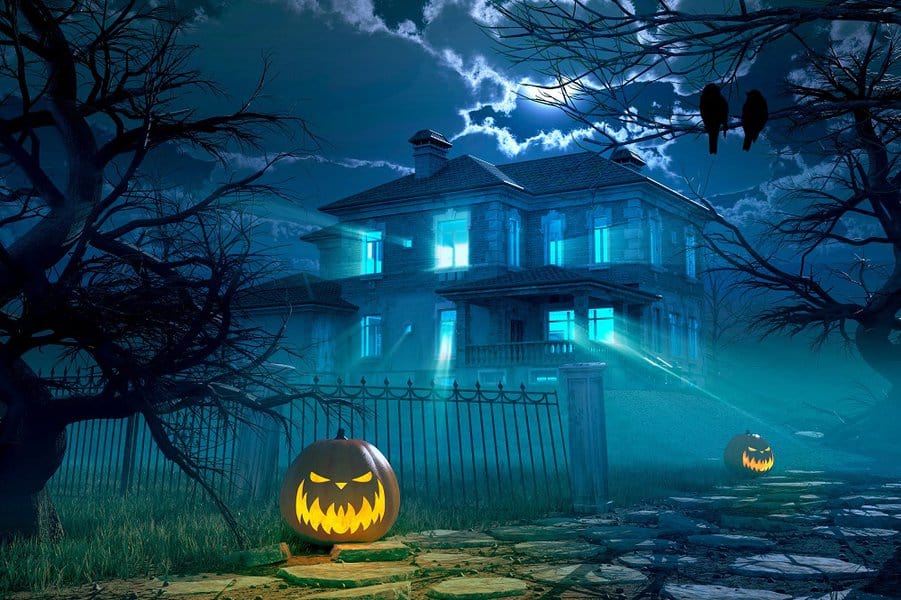 99. Knock, Knock. Who’s there? Justin! Justin who? Just in time for Halloween.

101. Knock, Knock. Who’s there? Canoe! Canoe who? Canoe please give me more candy.

103. Knock, Knock. Who’s there? Tyson! Tyson who? Tyson garlic around your neck to keep the vampires away.