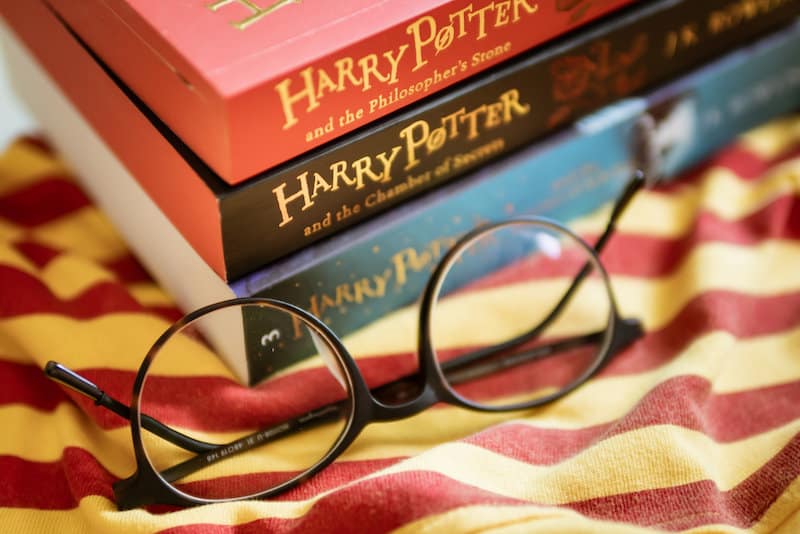 Author JK Rowling might be a controversial figure these days, but she is still responsible for one of the greatest young adult novel series of all time. The Harry Potter series of fantasy novels has sold over 500 million copies worldwide. The seven books have spawned spin-off novels, movie adaptations, stage shows, and even video games. The world of wizards and witches continues to be popular with fans today. So much so that Harry Potter memes are big with the online community of Harry Potter fans.

So if you are a Harry Potter fan and are looking for a couple of laughs about Hogwarts and the Deathly Hallows, read on and enjoy these Harry Potter memes. 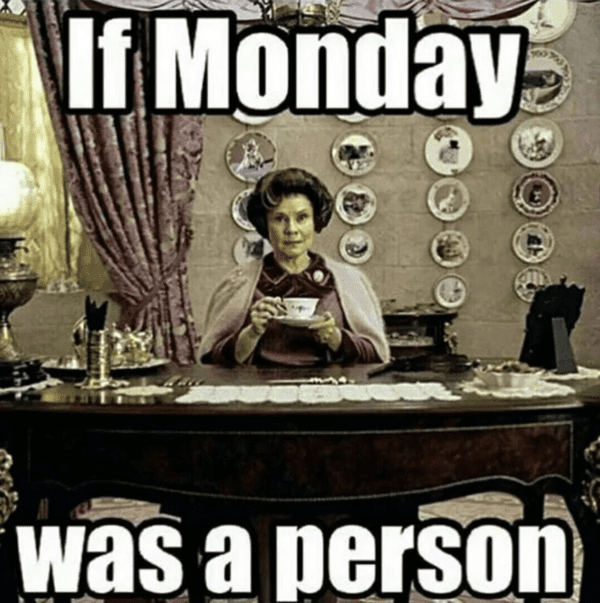 Nobody likes Mondays, and if you had to compare the day to a person, Dolores Umbridge would be a good fit. One of Harry’s enemies at Hogwarts School of Witchcraft and Wizardry, she is certainly a mood killer.

2. When Harry Potter Is Life 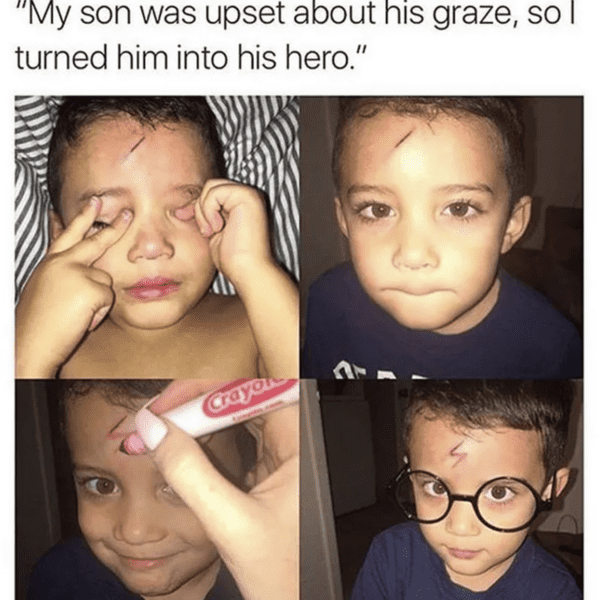 This poor Harry Potter fan got a cut across his forehead and was very unhappy. But thanks to the creativity of his mom, he got his graze turned into the same scar Harry Potter sports. This is a feel good meme that demonstrates how much people love Harry and his mates.

3. Don’t Feel Too Embarrassed About Your Outfit 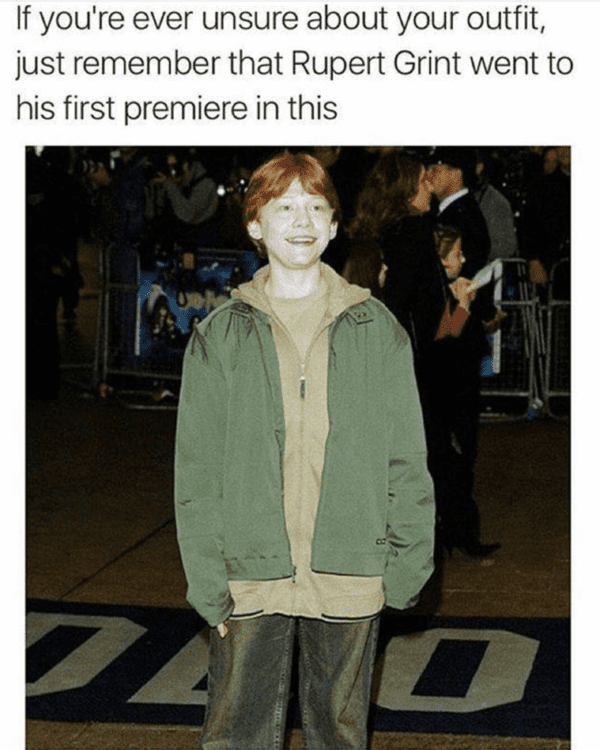 It’s amazing to think Ron Weasley, aka Rupert Grint, wore this outfit to the premiere of Harry Potter and the Sorcerer’s Stone back in 2001. At least he kept things color-coded. 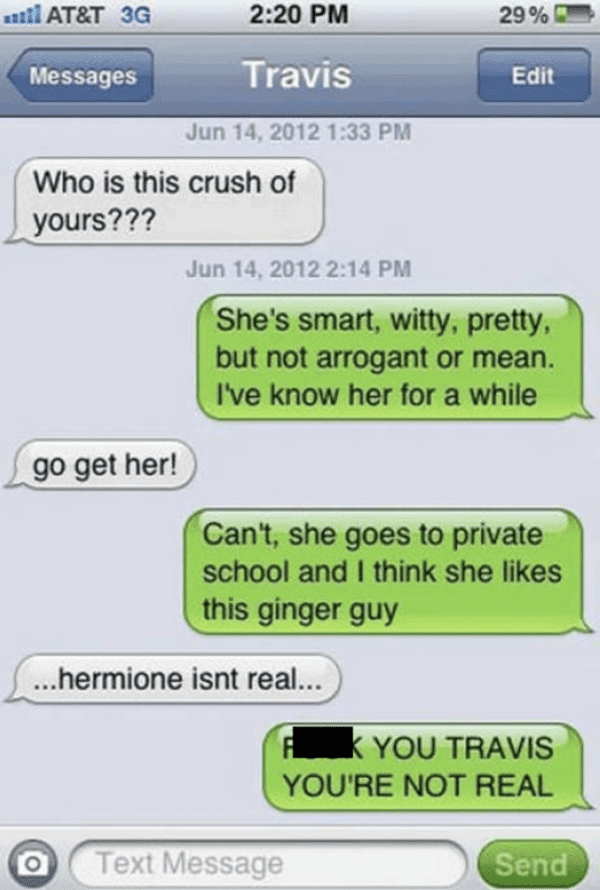 Travis is a funny guy. When his mate is telling him about the hot chick who goes to the private school he’s keen on, Travis jokes that Hermione Granger isn’t a real character. Good stuff.

5. Dobby Has No Master 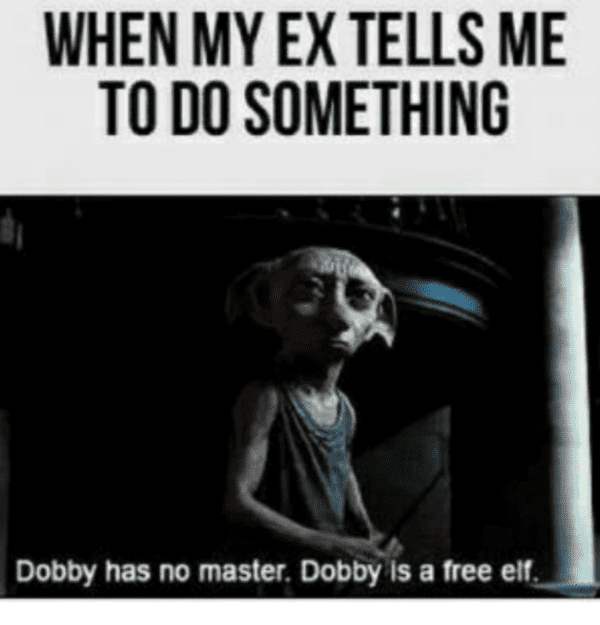 Dobby is a great character in the Harry Potter series and this Harry Potter meme is sure to resonate with those who have a clingy ex. Dobby is a free elf, just like you are free from any responsibility of your ex.

6. Was Hogwarts Really Worth It? 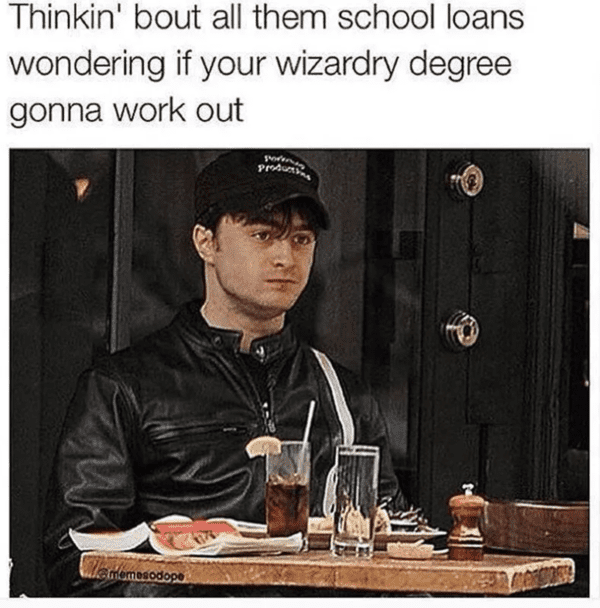 The majority of people who have paid their own tuition fees understand how Daniel Radcliffe feels in this meme. It’s a great tie-in with the Harry Potter franchise and one of the best Harry Potter memes on this list. 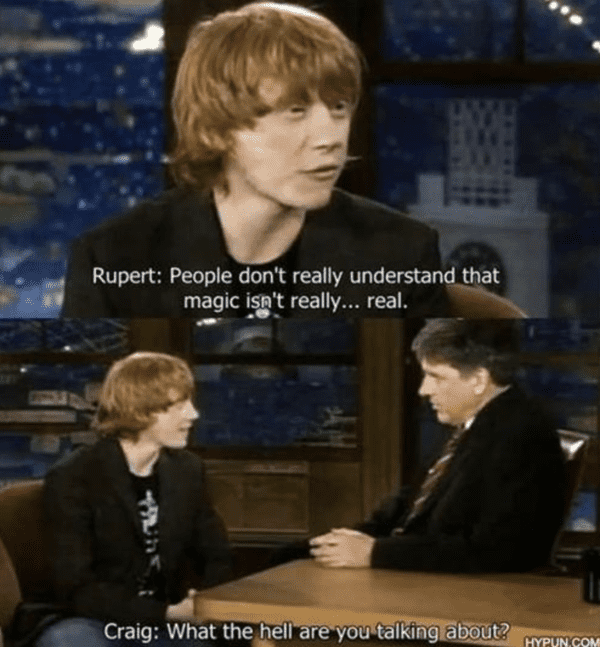 It seems some people think the magic seen in the wizarding world of Harry Potter is actually real. This is illustrated in an interview between Rupert Grint and Craig Ferguson on the Tonight Show, with Ferguson adamant what happens in each Harry Potter book is gospel. 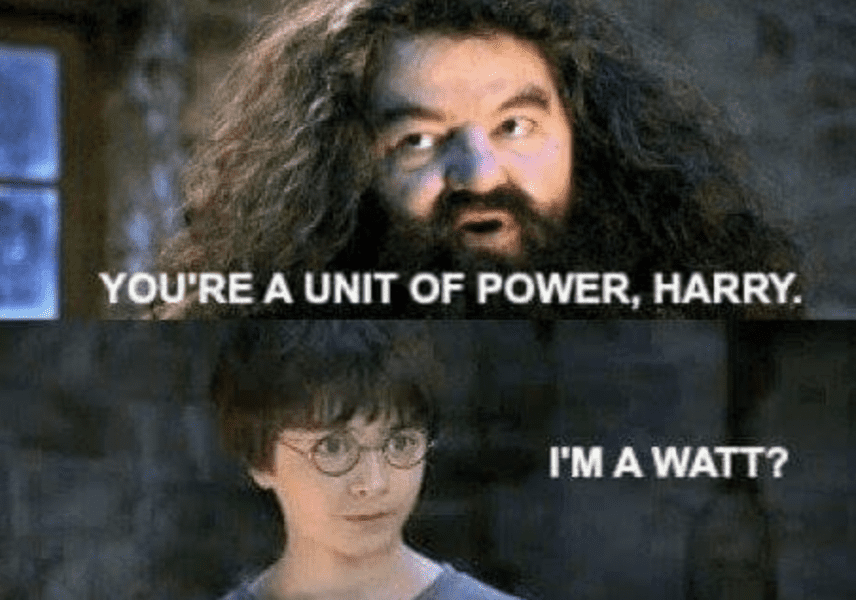 9. The Most Awkward Hug in Hogwarts History 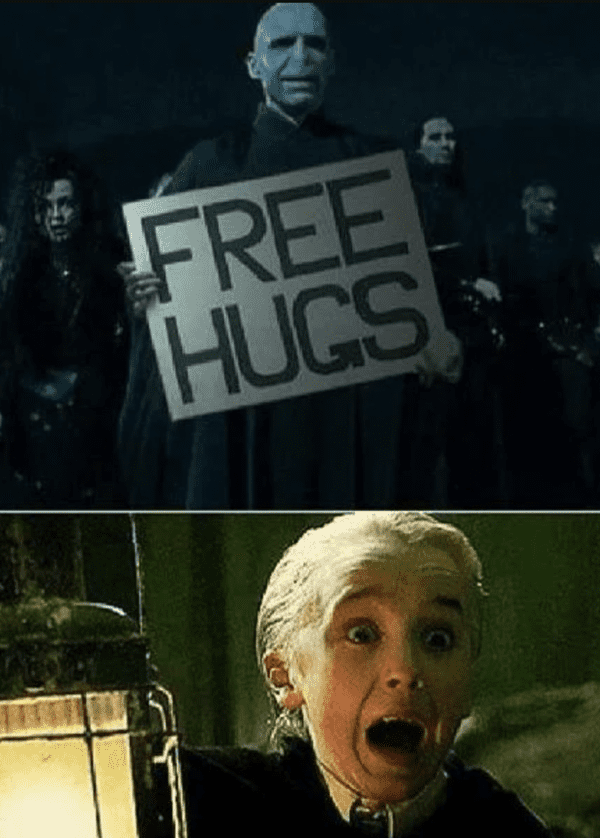 This meme makes reference to one of the weirder things that happens in the Harry Potter film franchise. When Lord Voldemort hugs Draco Malfoy, it’s pure awkwardness. There is no way Malfoy ever wants to get that close to the Dark Lord again, even when he’s giving out free hugs as shown in this meme. 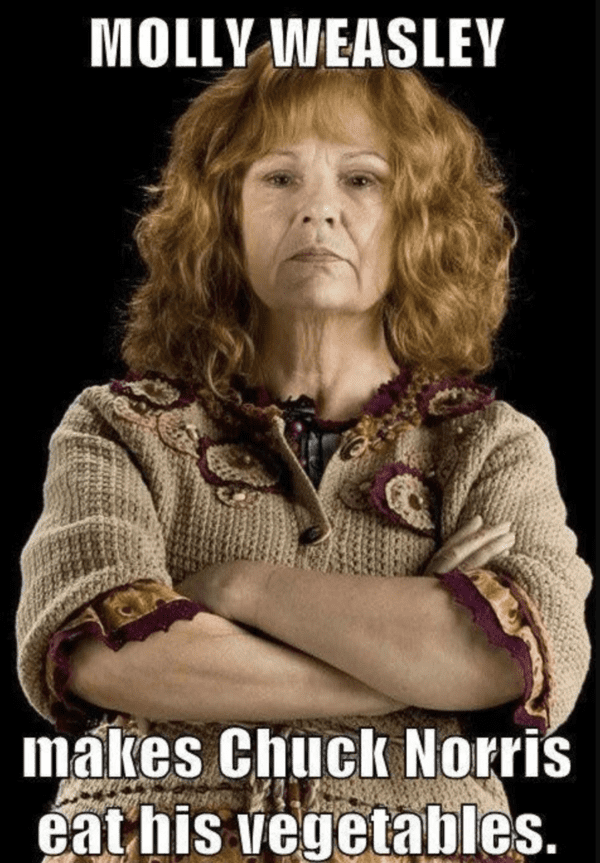 She might seem harmless but Molly Weasley can bring the authority when need be. While caring and kind, she is also disciplined and tough and will make sure you’re eating your vegetables. 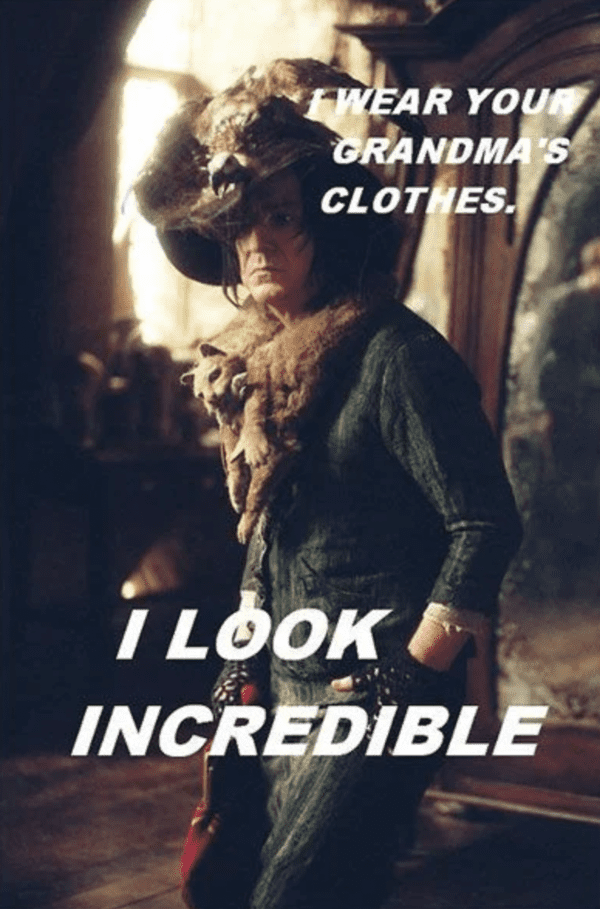 Alan Rickman is amazing as Severus Snape. He is a highlight of the Harry Potter movie series and can do no wrong. He steals every scene he is in. Even when he is dressed up as a woman, he still looks incredible 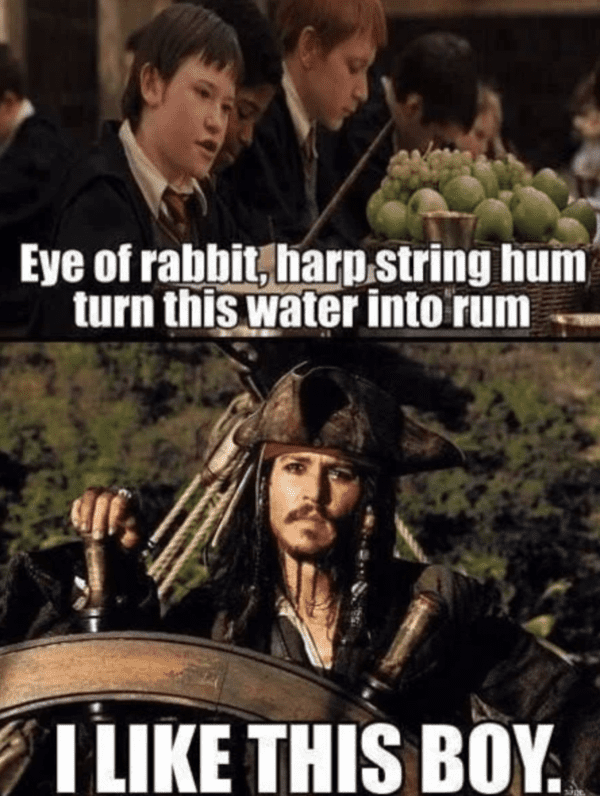 Imagine if Captain Jack Sparrow (Johnny Depp) was a teacher at Hogwarts? This meme shows exactly how that would go.

13. Whose Parents Are Those? 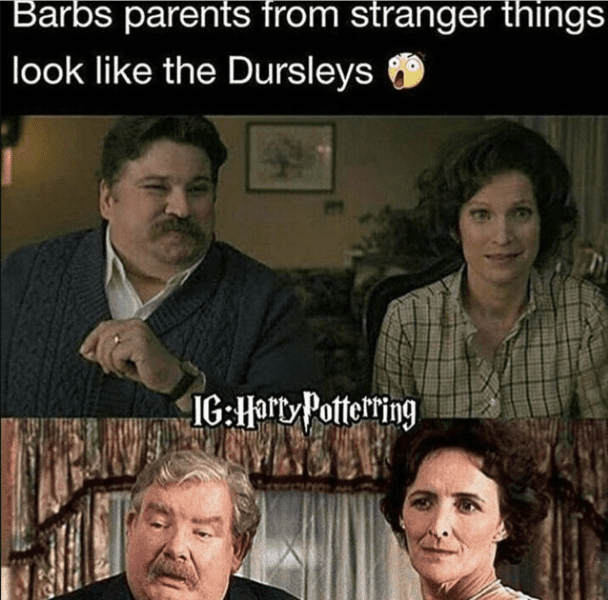 Ever notice how Barb’s parents in Stranger Things look similar to those of Dudley’s in Harry Potter? Very interesting… 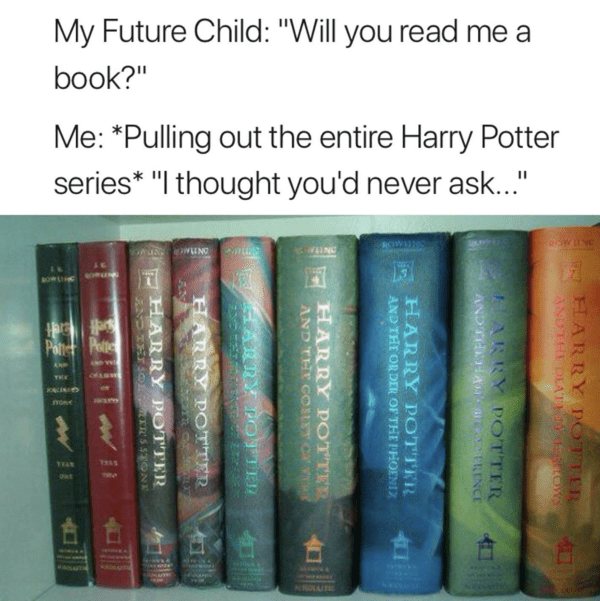 This is the day many parents are waiting for. Not their child’s first day at school or when they turn 16, but when you get the opportunity to read them the Harry Potter books.

15. Dumbledore Has Lived a Hard Life 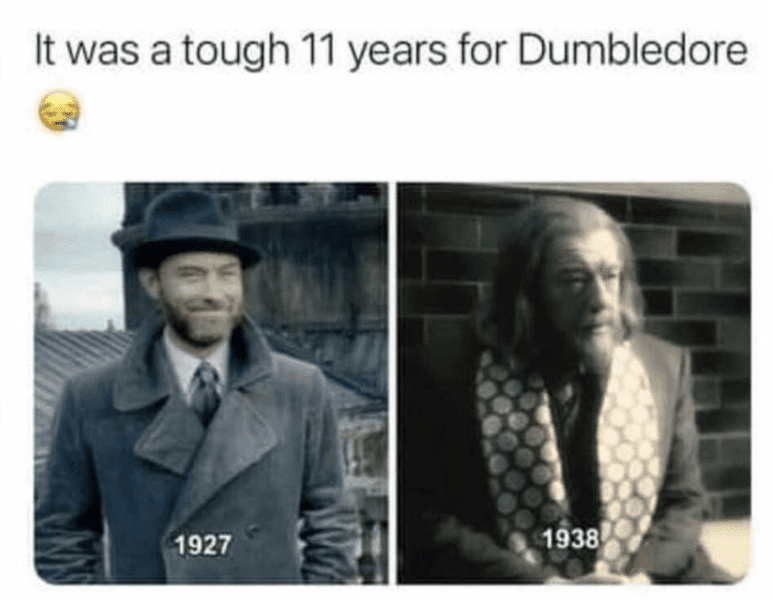 Dumbledore has lived a tough life if this meme is anything to go by. It shows a younger version of himself from Fantastic Beasts alongside another image of him 11 years later from the Harry Potter movies. 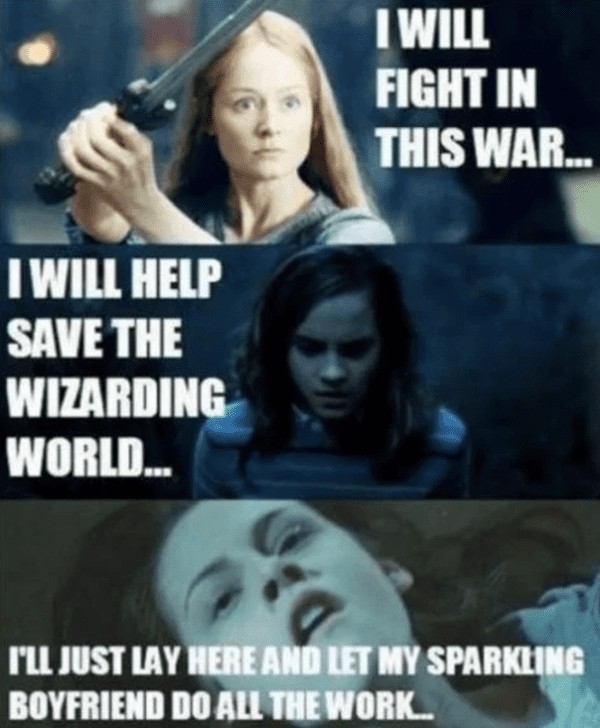 This meme takes a stab at the Twilight franchise, in particular Bella. While Hermonie is a true heroine putting her life on the line in the Harry Potter saga, Bella just lets her vampire lover get the job down. This meme is sure to cause some controversy amongst Twilight and Harry Potter fans.

17. Started From the Bottom Now We Here 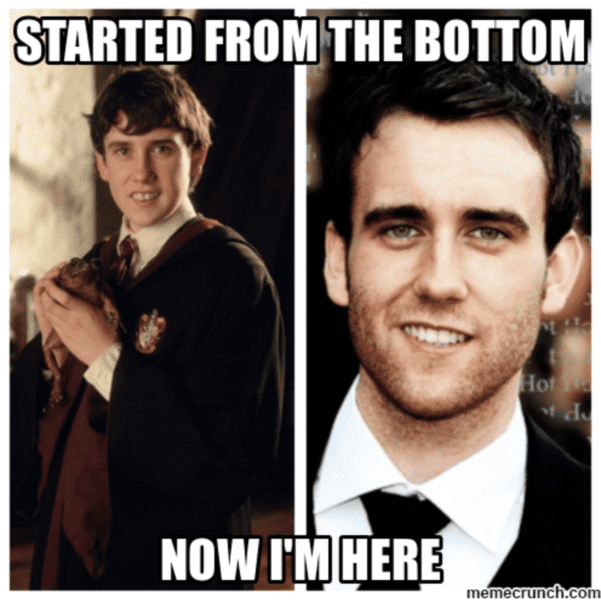 Referencing the Drake tune, this meme is a great inspiration for anyone who thinks they might be an ugly duckling. Neville Longbottom (real name Matthew Lewis) wasn’t the most attractive of characters in the Harry Potter universe. But once he got through those awkward teenage years he turned into one hell of a good looking lad. There is still hope for us all.

These images of Daniel Radcliffe on the set of Victor Frankenstein are exactly what he would look like if Lily Potter had married Severus Snape. New spin-off maybe? 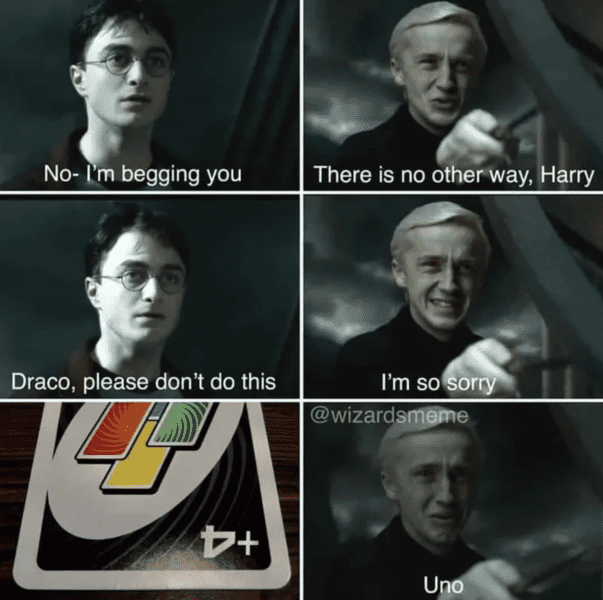 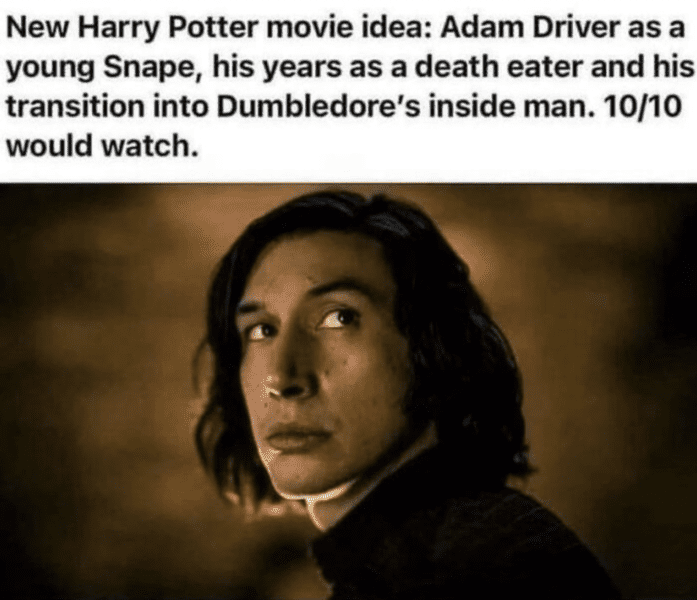 This is a pretty good idea for a Harry Potter spin-off. Adam Driver does look like a younger Snape. If you’re a fan of the movies, you will surely be keen on seeing this one on the big screen. Sign me up!