If you’re American you are no doubt familiar with Laffy Taffy candy and its Laffy Taffy jokes. This sweet-tasting candy was created during the 70s and quickly became a staple of Kathryn Beich Candies. First produced as flavored caramels (even though they aren’t caramels and in fact fruit flavored), the name of the candy soon changed to Beich’s Laffy Taffy.

The candy was bought by Nestles in 1984 and renamed Laffy Taffy. It originally came in thick squares but is now available in thin rectangle shapes. It became part of the Willy Wonka brand before being sold once again in 2018, this time to Italian chocolate company Ferrara Candy Company.

There are many different flavors of Laffy Taffy available, with the most common being strawberry, green apple, watermelon, cherry, grape, and banana. Rarer flavors include strawberries and cream, orange sorbet, chocolate mousse, and pumpkin donut.

Along with being a tasty sweet, each Laffy Taffy wrapper contains a funny joke, known as Laffy Taffy jokes. These one-liners, puns, dad jokes, and question-and-answer style gags are usually very silly but give kids something else besides another horrid candy bar to chow down on.

2022 appears to be a big year for the confectionary, with the Ferrara Candy Company launching a competition to find the next set of Laffy Taffy jokes. Rapper T Pain helped launched the competition and is one of the judges who will select the best gags. Not only do the winners get their jokes printed on Laffy Taffy wrappers, but they’ll receive their own Laffy Taffy mini bars with their jokes printed on them. The person who submits the best joke will also be awarded a cash prize of $5,000. 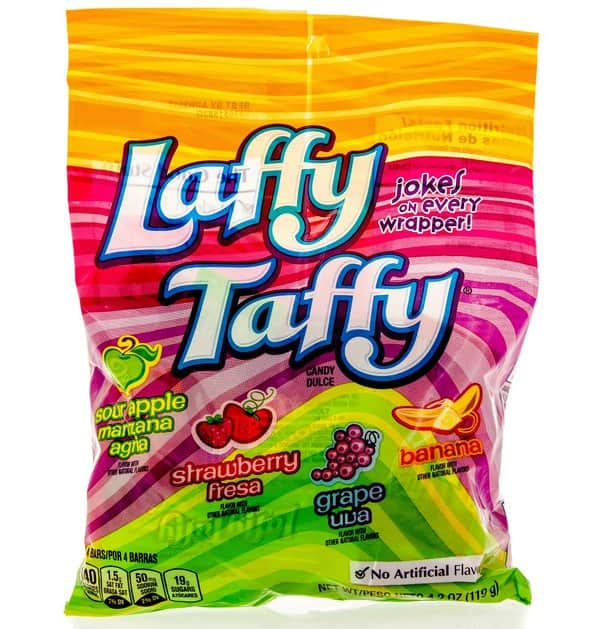 1. What do you call an avid gardener?

2. Why did the chicken go to the library?

To check out a bawk.

3. What happened after David had his ID stolen?

We had to call him Dav.

4. How do you mend a broken jack o’ lantern?

With a pumpkin patch.

5. What did the egg say to the frying pan?

You crack me up.

A place you go in Paris.

9. How do you get an alien baby to sleep?

10. Why does Where’s Waldo wear stripes?

He doesn’t want to be spotted.

11. What did the house wear to the party?

12. What did the hurricane say to the island?

13. What did the horse say when he fell down?

14. How do you communicate with a fish?

You drop it a line.

16. Why did the basketball player bring a duck to the game?

He wanted to shoot a foul shot.

17. What did the girl sea say when the boy sea asked her for a date?

19. How do billboards talk?

20. What kind of shoes do frogs wear?

21. What do you all a fancy sea creature?

22. What do you call a grandmother who tells jokes?

23. Where can you find an ocean without water?

24. What did the lunch lady say to Luke Skywalker?

Use the forks, Luke.

25. What kind of tea is sometimes hard to swallow?

I forgot… it is on the tip of my tongue.

27. What is the definition of a farmer?

Someone who is good in their field.

28. Why did the bones cross the street?

They didn’t, the dogs ate them.

Because of its bark!

30. What do you call a horse that likes arts & crafts?

31. Why do bananas have to put on sunscreen?

32. Why did the student eat his homework?

The teacher said it was a piece of cake.

33. Why do shoemakers go to heaven?

They have good soles.

Because they are shellfish.

36. What prize do you get for putting your phone on vibrate?

The no bell prize.

38. How do you organize a space party?

39. What are sailors’ favorite fruits?

Don’t stick your tongue out at me!

The hare to the throne.

43. What do you call a broken window?

A plain in the glass.

44. Why don’t ducks tell jokes while they are flying?

Because they would quack up.

45. Did you hear the joke about the toilet?

Because you can’t tuna fish.

47. Why do marsupials make such good tea?

When there is a change in the weather.

Numbers not divisible by 2.

50. Where do hamsters go on vacation?

When you’re eating a watermelon

Between us, something smells.

54. What did the music teacher say when her students asked if they sing their favorite song?

56. What word is always spelled incorrectly?

57. Why do we not tell secrets in a corn patch?

58. What do cats eat for breakfast?

When you’re eating a watermelon!

60. What kind of horses go out after dusk?

61. Did you hear about the fire at the circus?

It was in tents!

62. What do frogs order at a restaurant?

63. What do you call it when a dinosaur crashes his car?

64. Where does a penguin keep his money?

66. Why did the banana go to the doctor?

68. What do you call a sad strawberry?

71. What did the pancake say to the baseball player?

72. When can peanuts laugh?

When you crack them up!

With a sea saw!

74. What did the buffalo say to his kid when he went to work?

75. What should you do if your dog is missing?

Call the lost and hound.

76. What building has the most stories?

Because it rises in the yeast.

Saturn; it has three rings!

79. What’s green and fluffy and comes from mars?

80. What do you call a sleeping bull?

Because they can’t talk!

No, but April May.

85. What do sharks say when something radical happens?

88. What did one campfire say to the other?

Let’s go out one of these days!

90. Why was the tomato blushing?

Because he saw the salad dressing!

91. Why should you never use a dull pencil?

92. What runs around a soccer field but never moves?

93. What do you call a lazy baby kangaroo?

95. Where do kittens go on their class trip?

99. Why did the orange lose the race?

It ran out of juice.

He was feeling crummy.