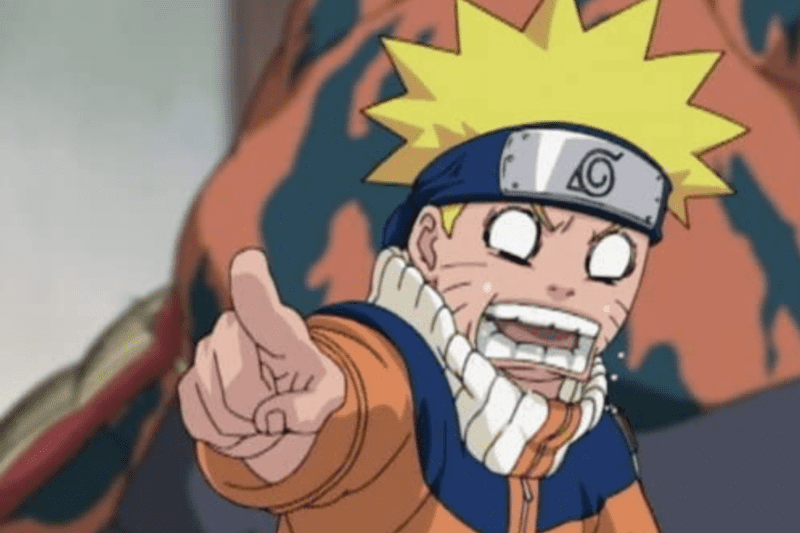 12 of the Funniest Naruto Memes for Anime Lovers

The only thing more popular than the critically acclaimed anime series Naruto is Naruto memes. The beloved manga follows beloved ninja Naruto Uzumaki as he battles formidable enemies and earns his villagers’ respect. Series creator Masashi Kishimoto created a fantastic world with an off-beat hero. It’s only fitting that the Naruto memes are equally as hilarious. Fans of the series love these popular memes that put smiles on their faces.

12 of the Funniest Naruto Memes for Anime Lovers

1. Today’s the Day I Become Useful 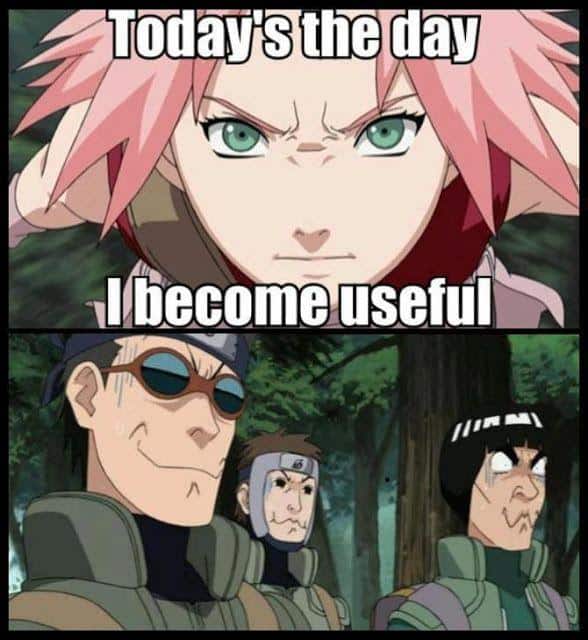 Anime fans often create Naruto memes that sum up a character or storyline faithfully. For instance, Naruto fans felt Sakura didn’t add much to the series early on. Later, she briefly became a skilled ninja and was more valuable. Regardless, fans quickly jumped on this funny meme, which remains a popular inside joke. 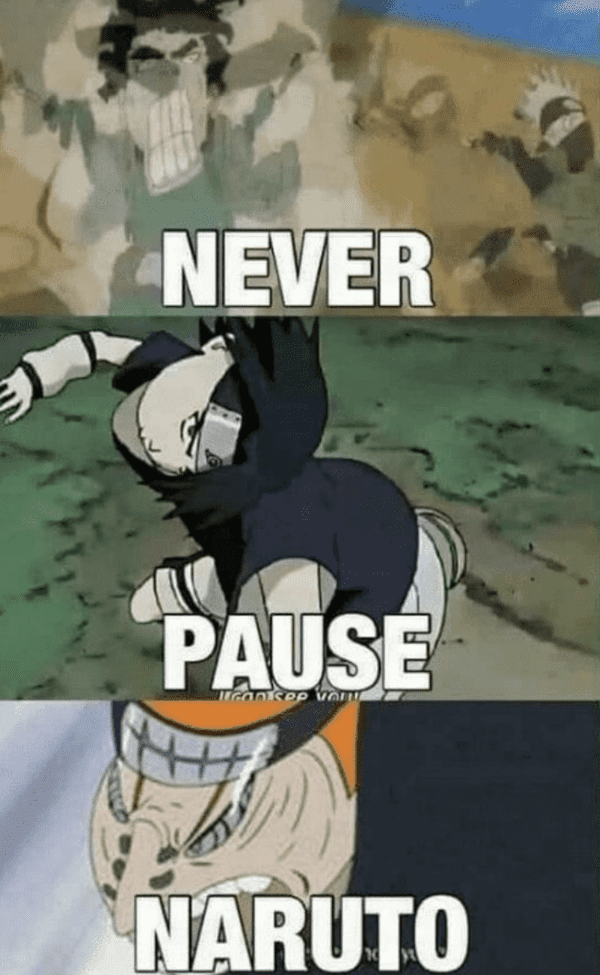 Naruto’s a complicated anime with fast-moving fighting sequences. The animation won’t always be perfect. Regardless, this isn’t just a hysterical meme. It also offers excellent advice to fans who don’t want the illusion broken. 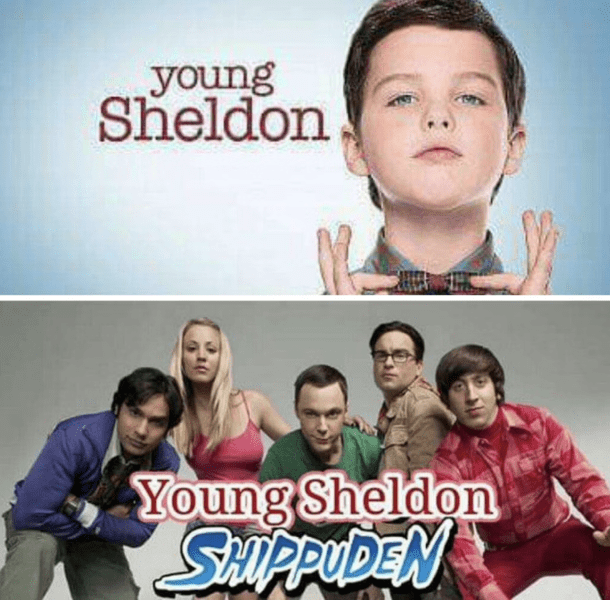 The Naruto Shippuden and The Big Bang Theory meme makes perfect sense. Fans of both series feel they have too many filler episodes. The fillers don’t evolve the characters or progress the series. It’s the perfect meme since it takes shots at two shows. 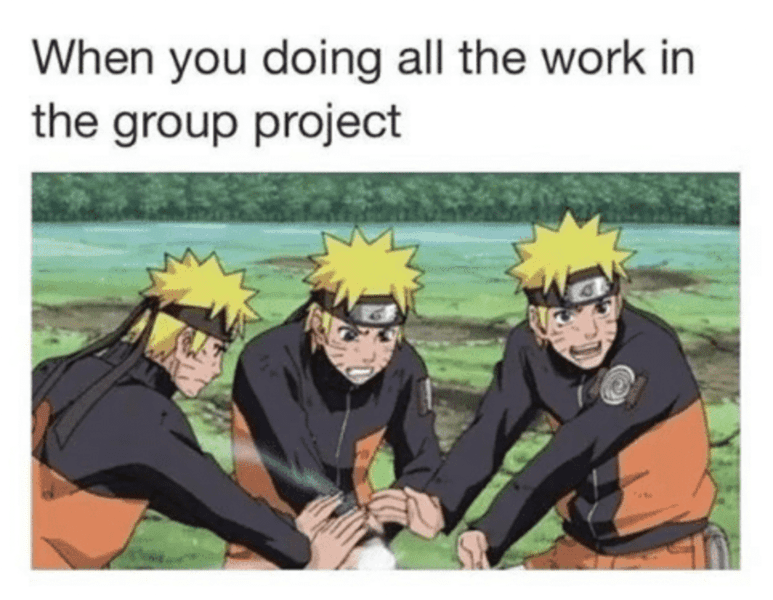 Here’s a Naruto meme that accomplishes two goals. It takes shots at Naruto and school projects. Naruto’s character is very skilled at clone technique. He often uses it when battling his enemies. It would also come in handy for school projects when the rest of the group is slacking off. 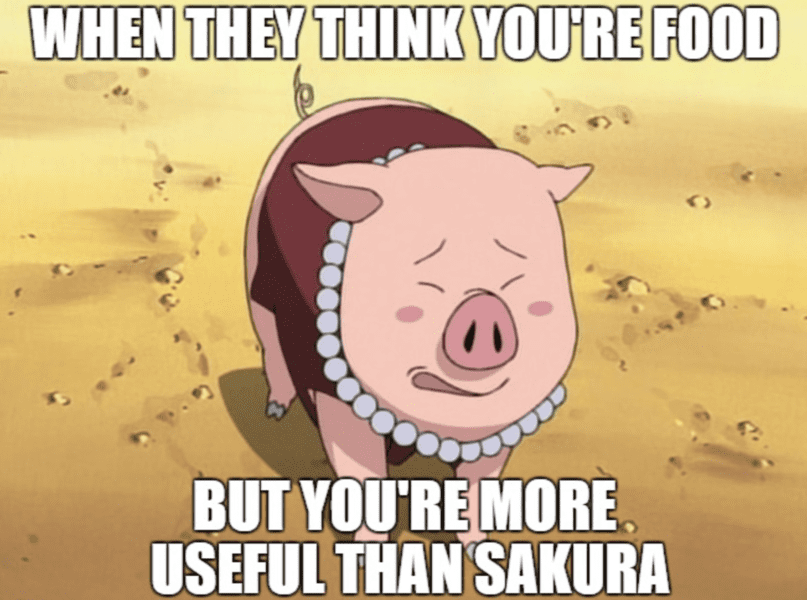 Since the beginning of Naruto, fans have been taking shots at Sakura. She’s an essential character in the manga but didn’t serve much of a purpose early on. Her character improved over time, but the hilarious memes keep coming.

6. The School of Our Dreams 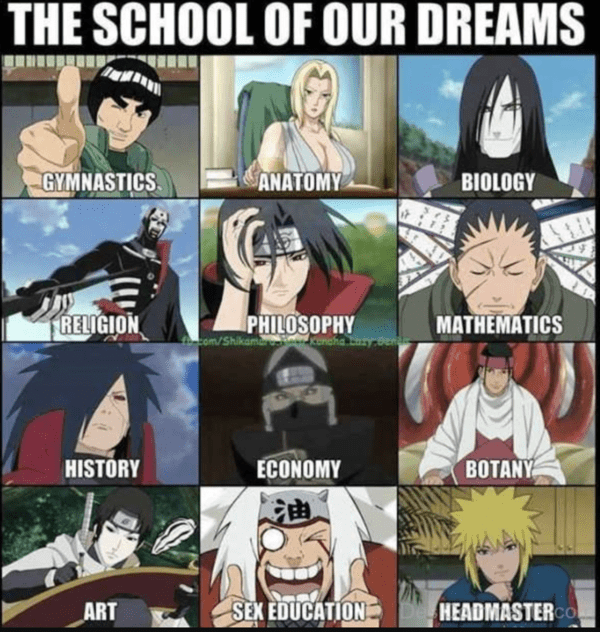 For most kids, going to school is a tedious task they’d rather not do. Well, unless they’re going to ninja school. This hysterical Naruto meme speculates on the classes and teachers at the school. It appears to be a fun school, unlike the others. However, don’t upset the sex education teacher. 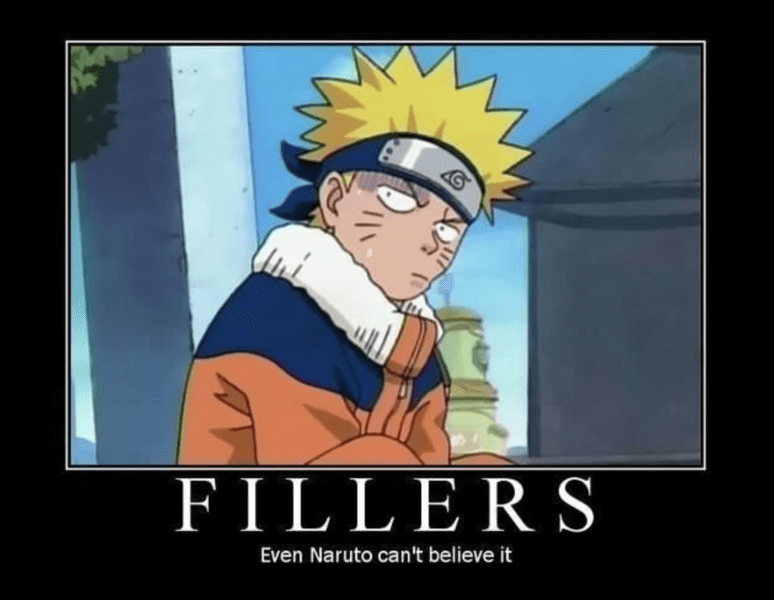 Naruto fans love the anime series’ complex storylines that follow the manga. On the other hand, fans absolutely hate the filler episodes. They feel the fillers hurt the series and add nothing to it. Even Naruto appears to agree.

8. The Most Dangerous Weapon: Rasengan 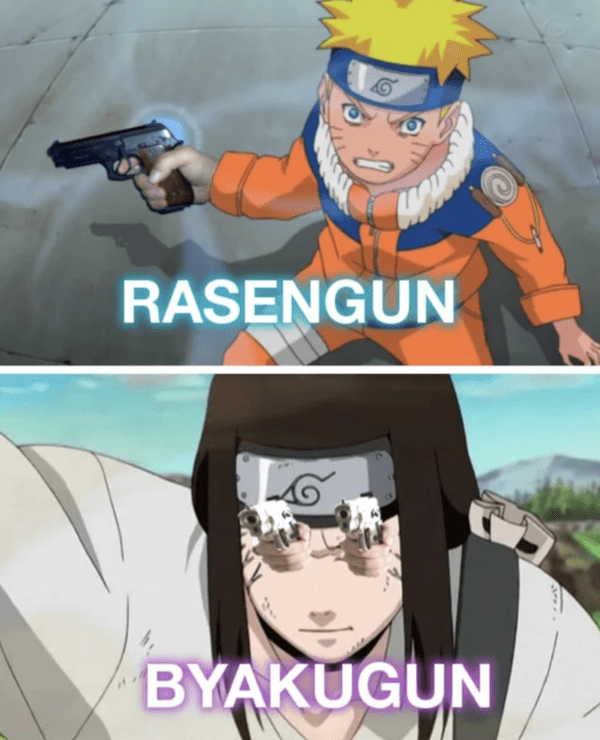 Naruto often uses the Rasengan technique to destroy his hated rivals. Of course, fans quickly mocked the particular skill with a hilarious meme. Fans replaced the ball of chakra with various guns. They wisely point out that a gun would probably be a better weapon to use in a battle with a dangerous villain.

9. The Fastest Way To a Girl’s Heart 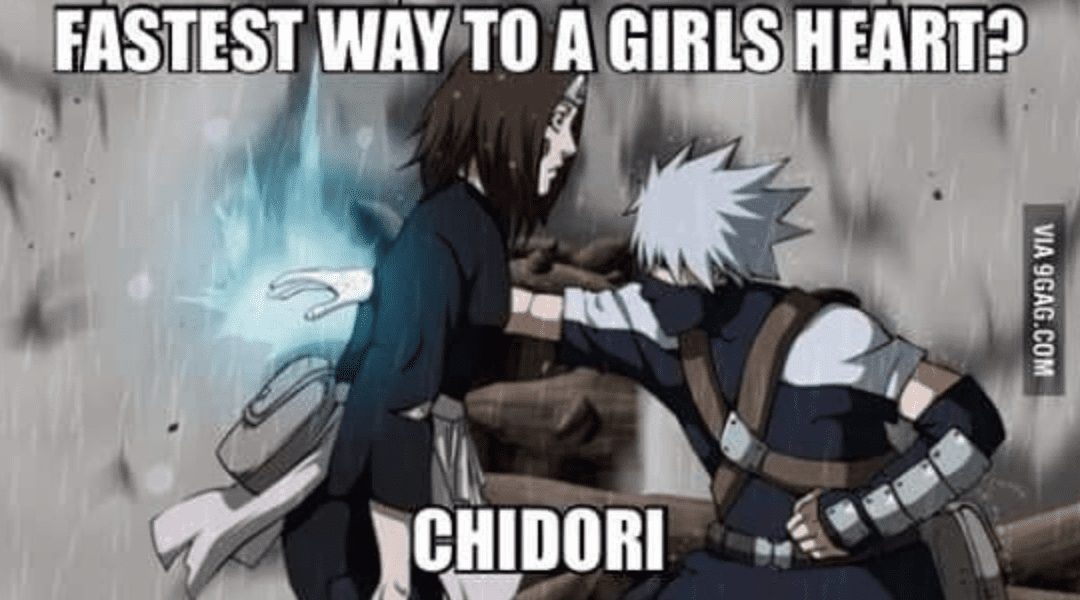 Kakashi’s greatest technique, Chidori, is also one of the funniest memes. His unique skill allows him to strike through a person’s heart during combat. Of course, he could literally steal a girl’s heart if he wanted. It’s a powerful skill but isn’t helpful in relationships. It would make a great pickup line though. 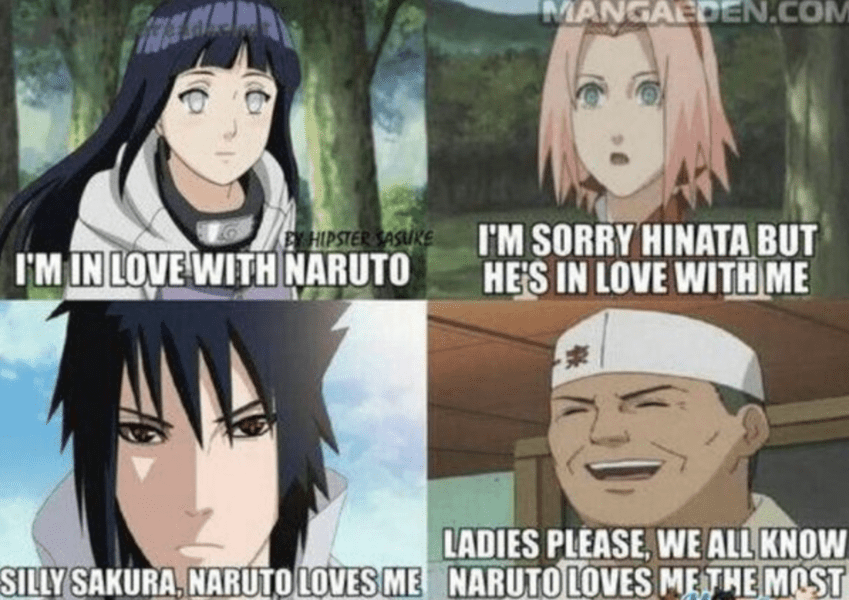 There is plenty of romance in the Naruto series with all the cutest anime couples. Fans of the manga and anime know Naruto has two main love interests in the series, Sakura and Hinata. Well, it turns out there’s a third true love. According to this Naruto meme, Naruto’s soulmate is his true love ramen. Food is the quickest way to a guy’s heart.

11. Kakashi Reading 50 Shades Before It Was Popular 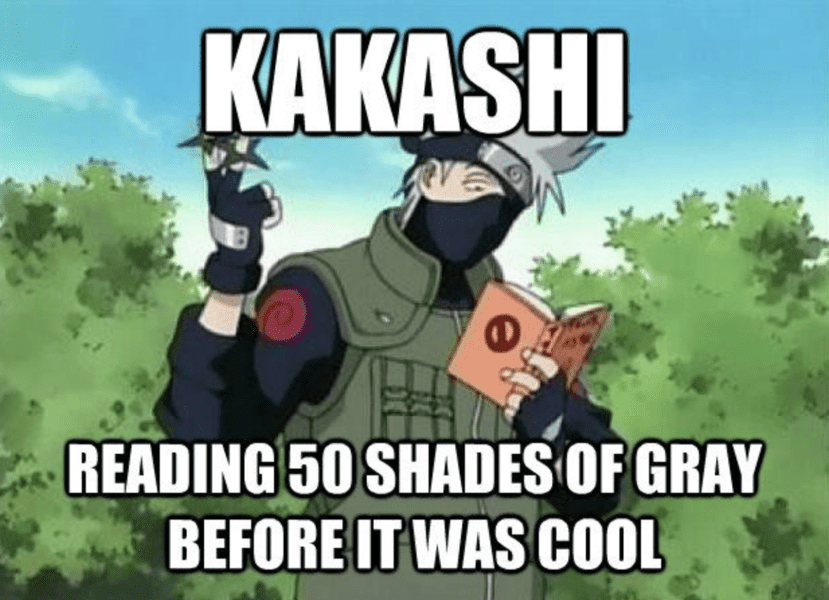 Kakashi’s character is a skilled ninja and trendsetter. Indeed, he read adult novels before they became all the rage. Kakashi enjoys beating up ninjas, romance, and hot steamy love scenes. The hilarious meme ties the dangerous Kakashi’s love for the adult series Make Out Paradise with the steamy novel series 50 Shades of Grey. 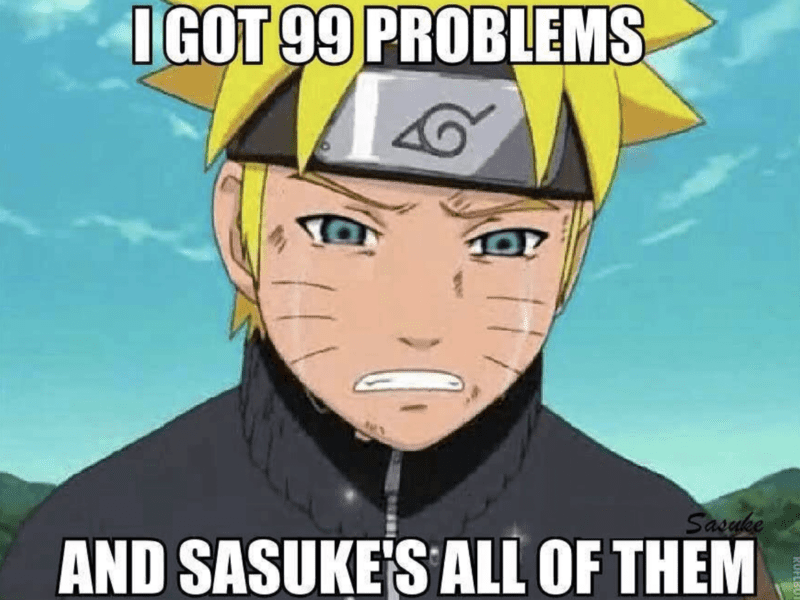 The lovable hero Naruto Uzumaki is a skilled ninja, but he’s got problems like everyone else. Namely, Sasuke Uchiha. Sasuke’s cool attitude and incredible skills drive Naruto crazy. The funny meme plays off Jay-Z’s classic 99 Problems. Apparently, Naruto can relate.