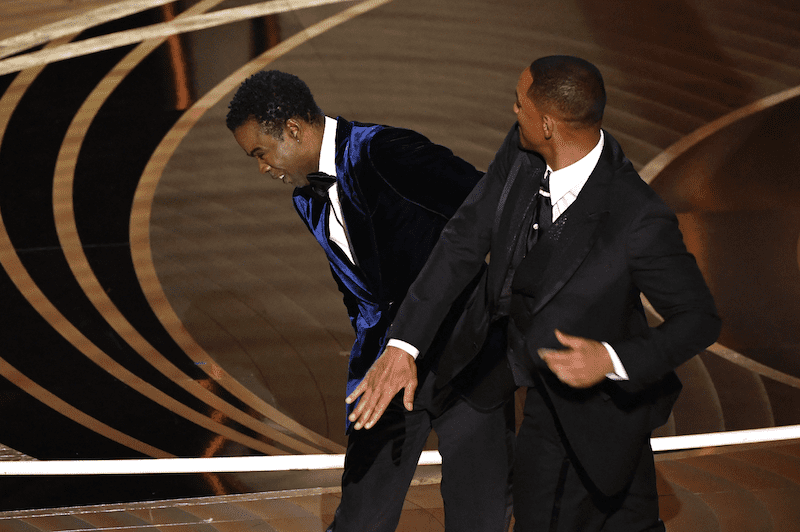 Will Smith became perfect meme fodder after the 2022 Oscars. The slap heard around the world is one of the most shocking and hilarious moments in Academy Award history. For anyone living under a rock (pun intended), Will Smith took offense to a joke host and comedian Chris Rock made about his wife Jada Pinkett Smith having no hair. Instead of laughing along and ignoring the crack, Will Smith got up out of his seat, approached Chris Rock, and slapped him on live television. It’s an incredible moment that is still reverberating around the world months later. It was all over social media and resulted in a raft of hilarious Will Smith Memes. Twitter, Instagram, Facebook, and even Tik Tok started making fun of the incident.

Now we in no way condone violence and believe Smith should have to answer for his actions, but we also believe you can still have a laugh at the situation. This is something the majority of people on the internet also agree with. There have been hundreds of memes about the incident that not only make fun of Smith and Rock but relate to other issues and events. So if you’re still not over Smith slapping Rock, read on and enjoy these 20 hilarious Will Smith Memes. 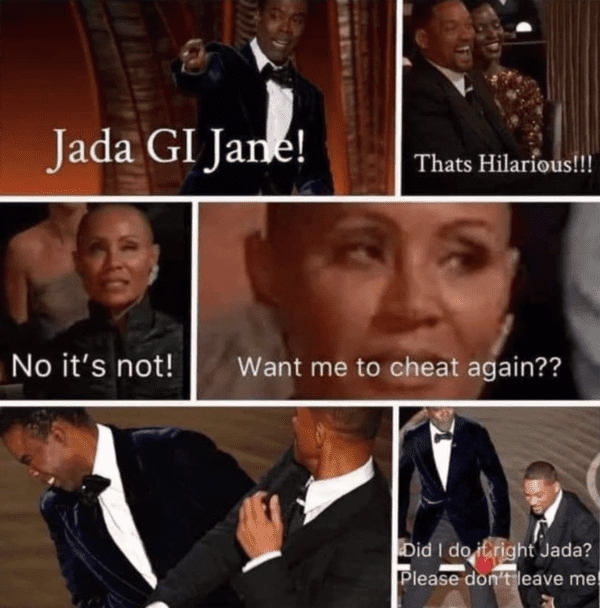 This meme goes straight for the jugular. It proposes that after Chris Rock made his GI Jane (sorry Demi Moore) quip and Will Smith laughed along, he got the side-eye from Jada Smith who reminded him about her previous affair that went viral. That’s the reason he got up and slapped poor old Chris Rock. So Jada wouldn’t leave him. Ouch. 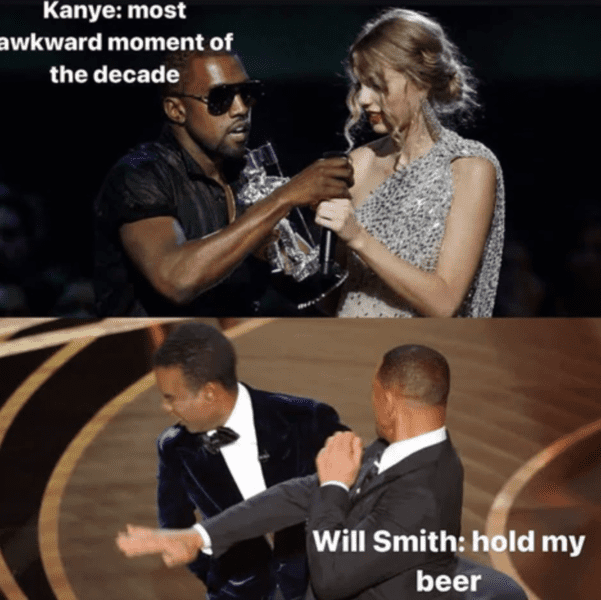 When you out Kanye Kanye, you know you are doing something wrong. King Richard needs to settle down and leave Chris Rock alone.

3. The Fresh Prince of No Hair 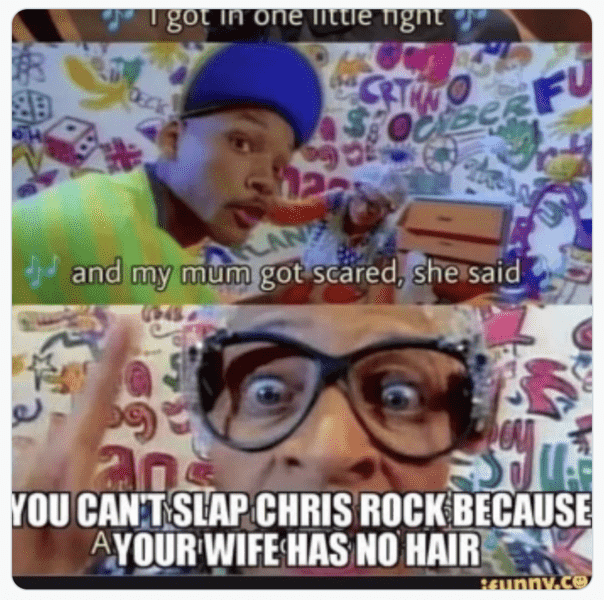 This great meme changes the lyrics of the Fresh Prince of Bel-Air theme song to add some words about Smith slapping Rock. 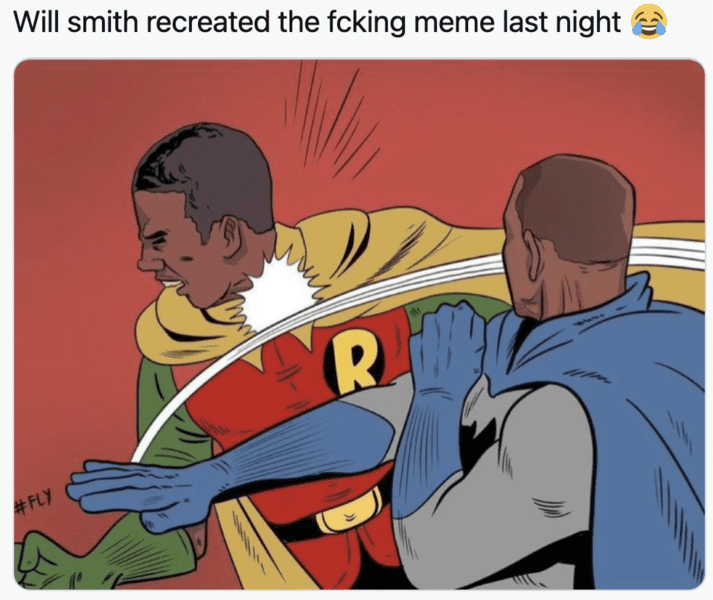 Batman slapping Robin is already a funny meme that’s gone viral. It seems Will Smith and Chris Rock wanted to recreate this meme in real life to get their own version as seen above on Twitter. 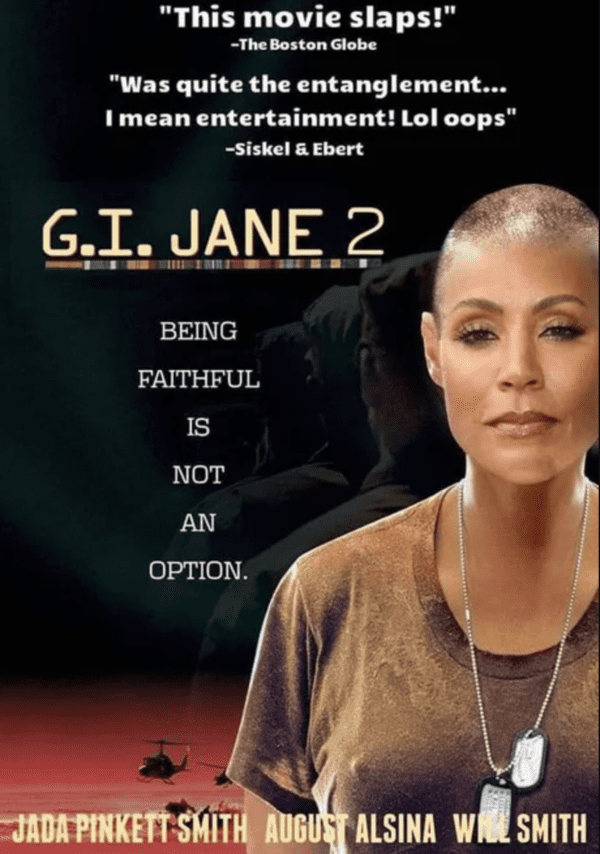 Ouch. This fake movie poster for GI Jane 2 not only features Jada but references her affair. The killer blow might be the review from The Boston Globe that reads: “This movie slaps!” 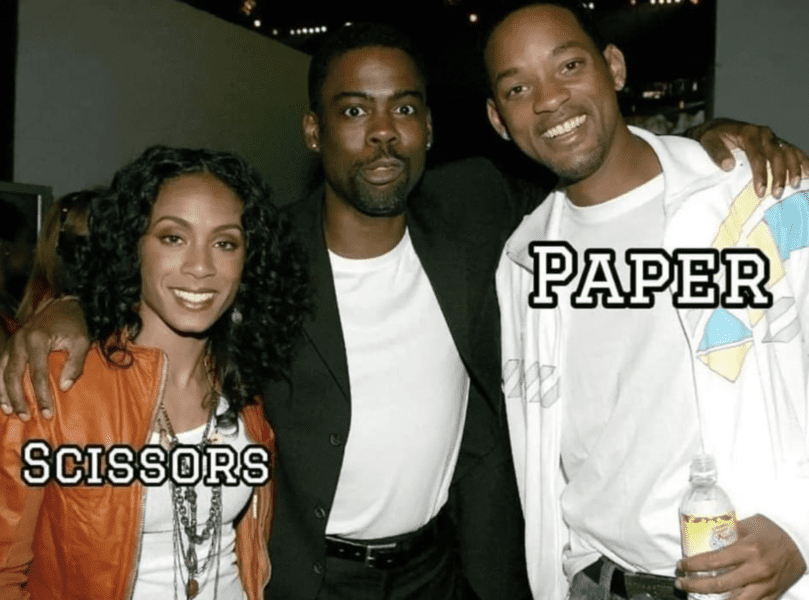 This is another great Will Smith meme. Which one are you choosing? 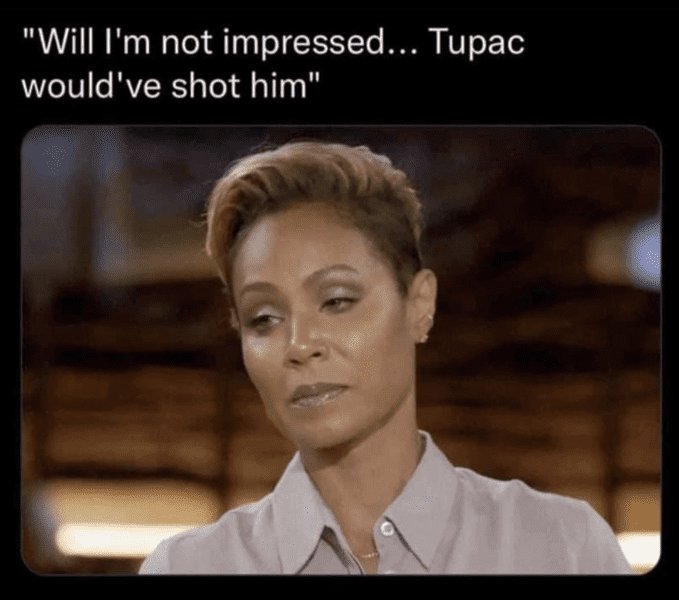 Jada expects a lot more from her man. When you’ve dated someone as gangster as Tupac, a slap doesn’t really make a huge difference. 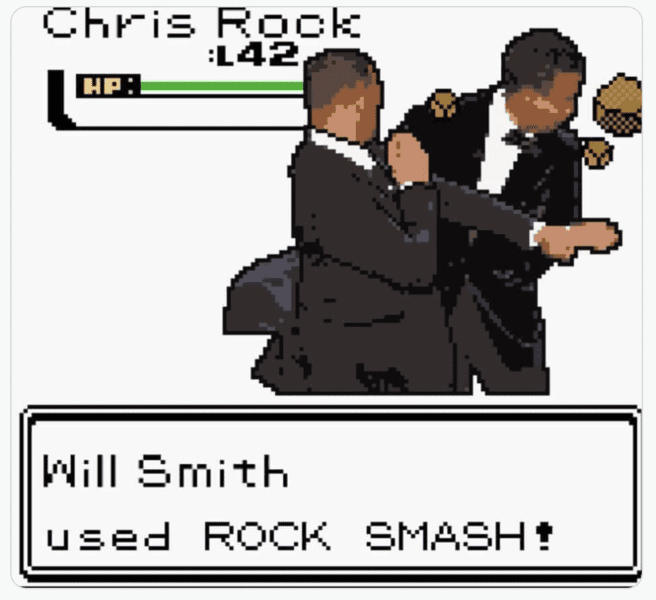 If the confrontation between Will Smith and Chris Rock was a video game it would look something like this meme.

9. Gotta Catch Them All! 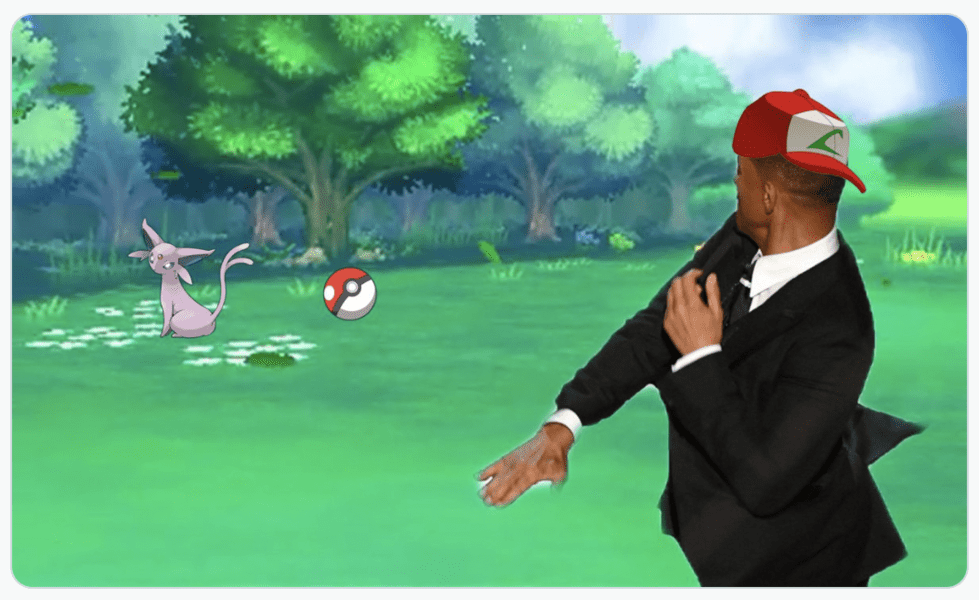 Will Smith enjoys playing Pokemon. This is one of the funniest memes on this list in my opinion. 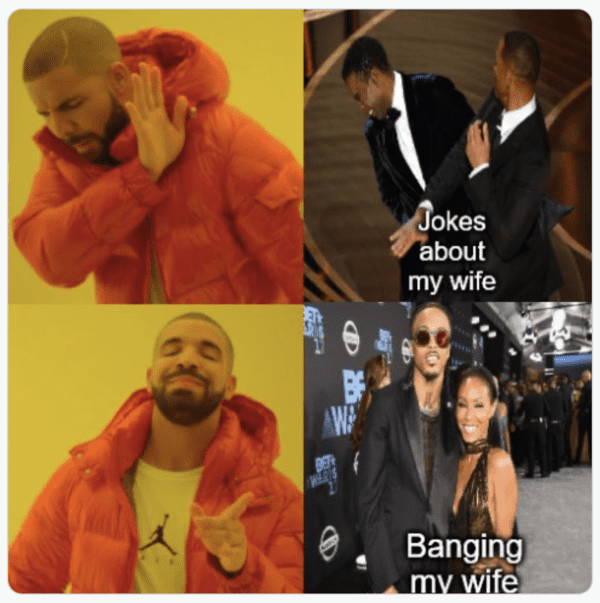 When you use an iconic Drake meme to make more fun of Will Smith slapping Chris Rock. Good times. 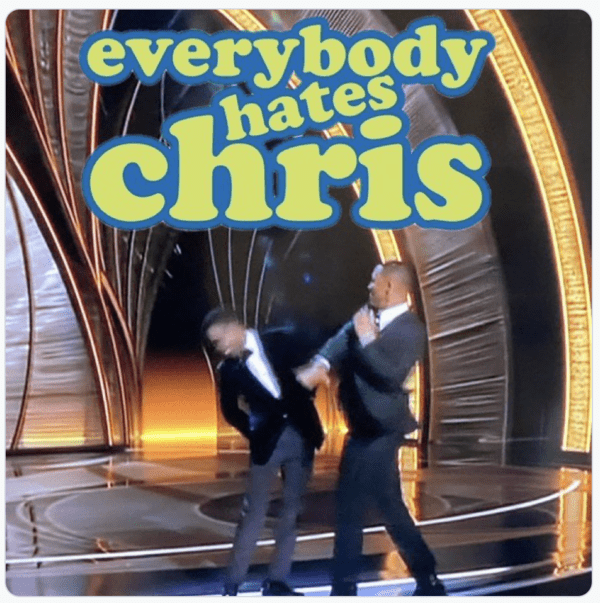 A great use of the title from Rock’s TV show about his youth. While more of a Chris Rock meme, it’s still worth a mention. 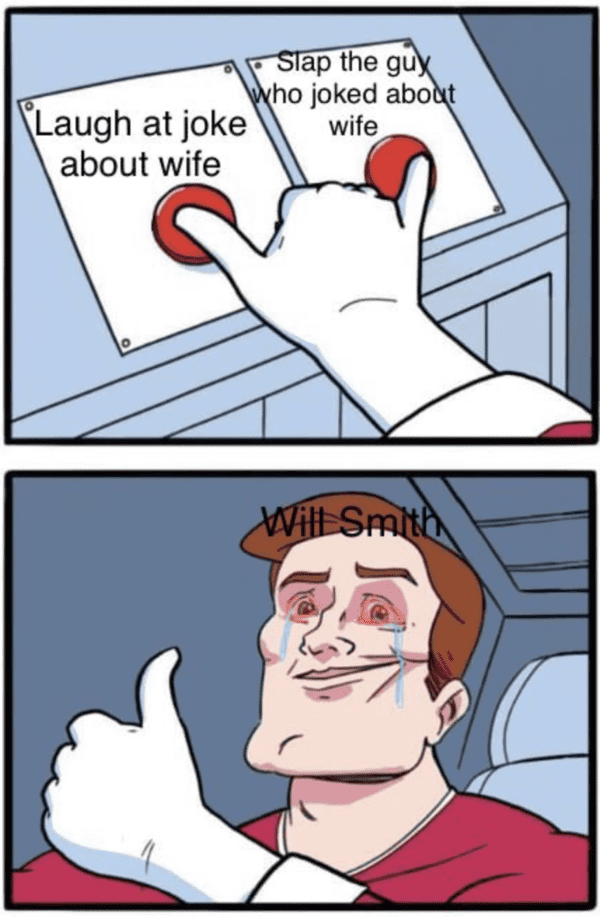 The ‘two buttons’ meme is another classic that depicts a cartoon character having to choose between two different choices, none of which result in great outcomes. 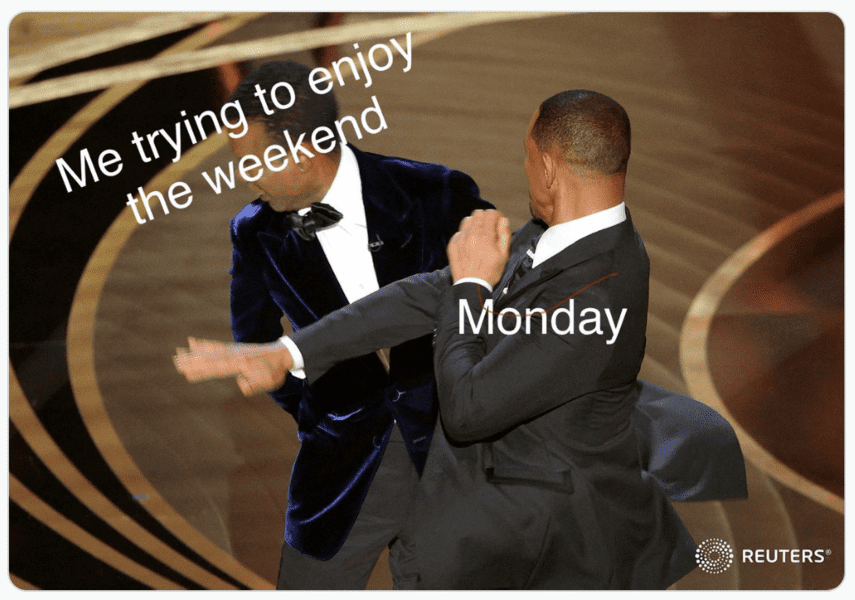 When you’re enjoying your Sunday and then Monday suddenly creeps up on you like Will Smith slapping Chris Rock. 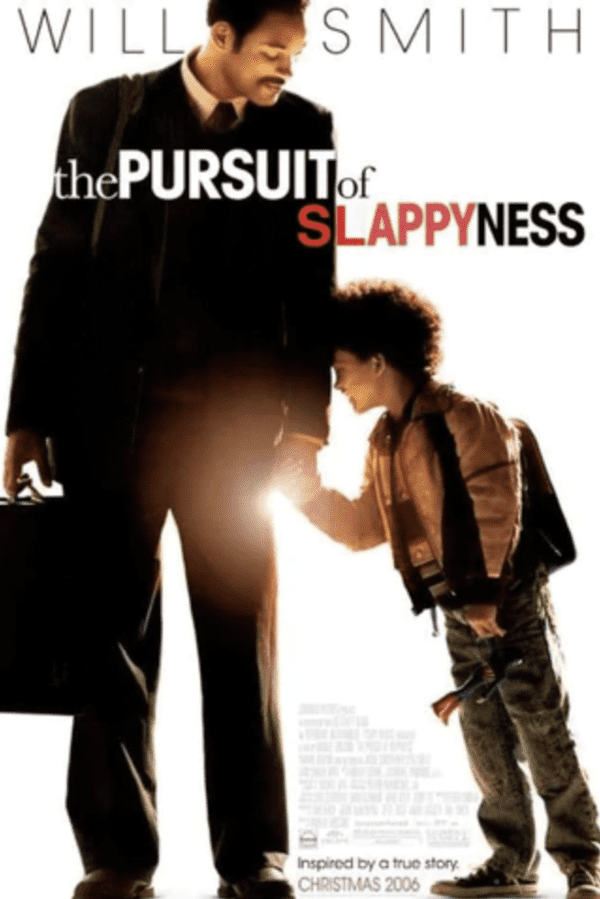 15. Zendaya Filling in Tom Holland on the Oscar Goss 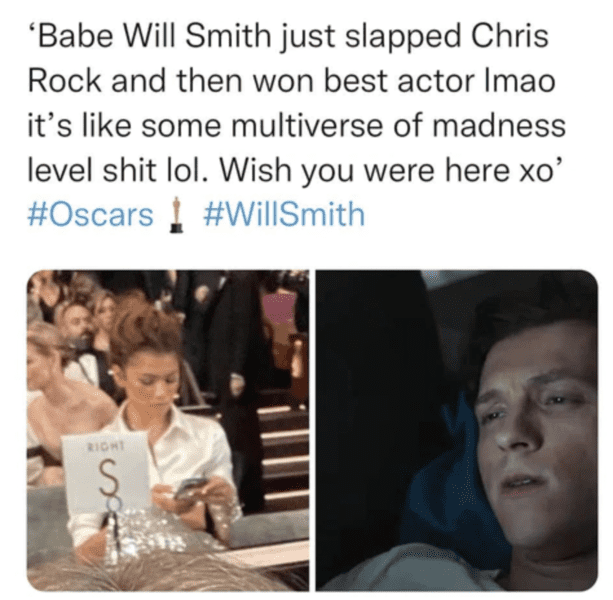 Everyone loves Zendaya and Tom Holland, so here is some wholesome content about Will Smith’s slap. 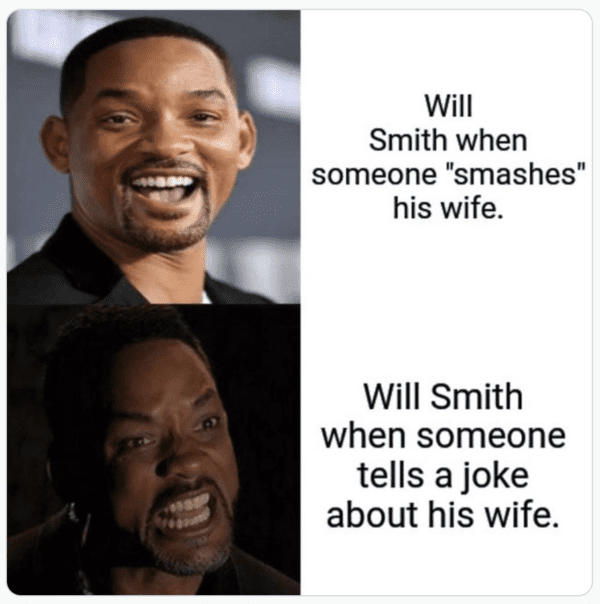 Will Smith gets angrier when someone makes a joke about Jada than when they sleep with her. Strange times. 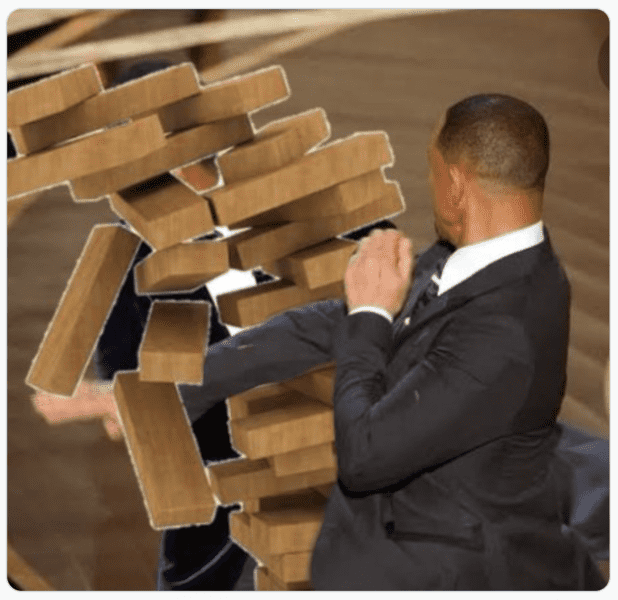 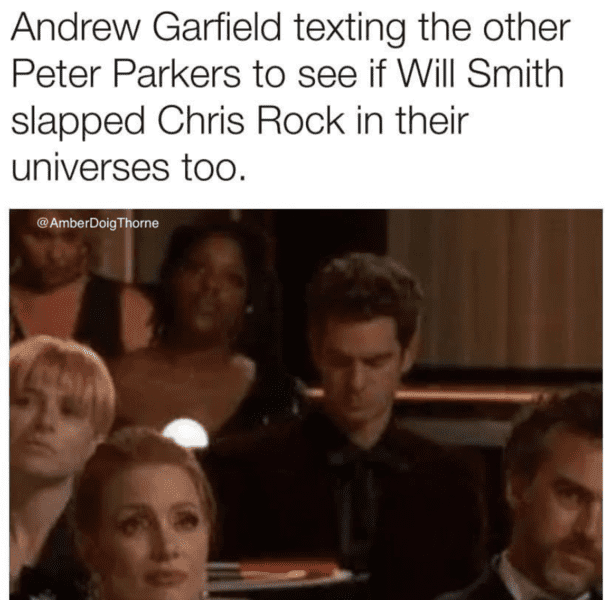 If someone gets slapped in our world, does it happen in the other universes? Andrew Garfield is trying to find out by texting his fellow Spider-Man freinds.

19. Trying To Act Cool in Front of Your Friends 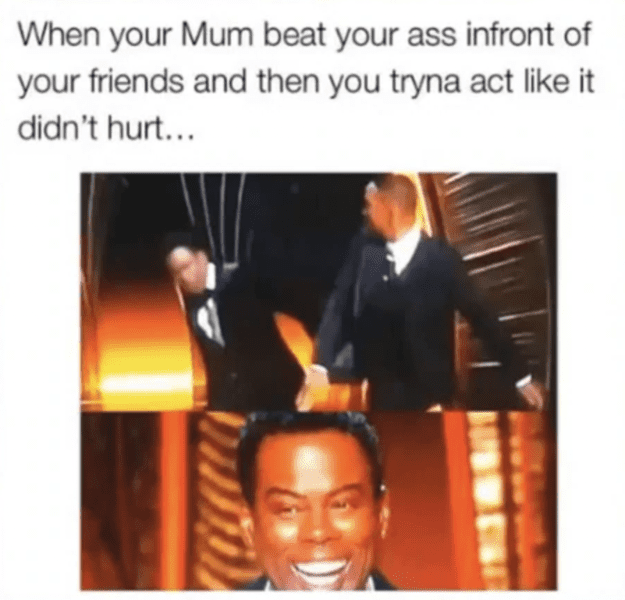 We’ve all been there. You have some friends around and your mom gets angry and gives you a whack but you try your best to stay cool, even though you want to cry. 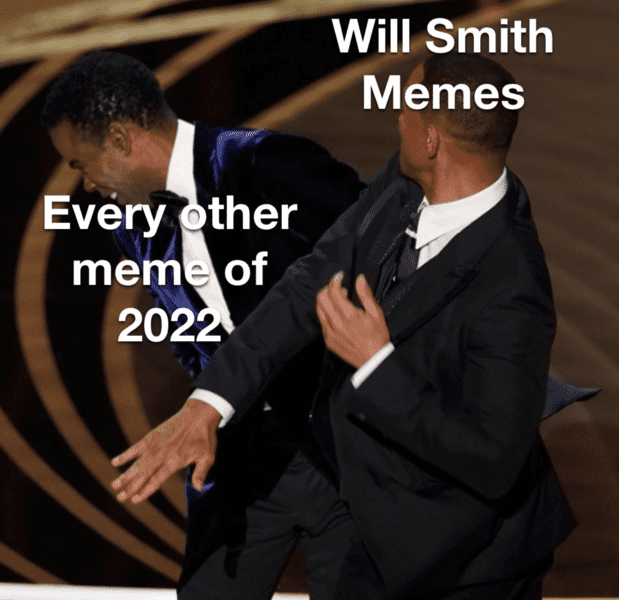 There really is no competition when it comes to the best meme of 2022. Will Smith has the award all sewn up.