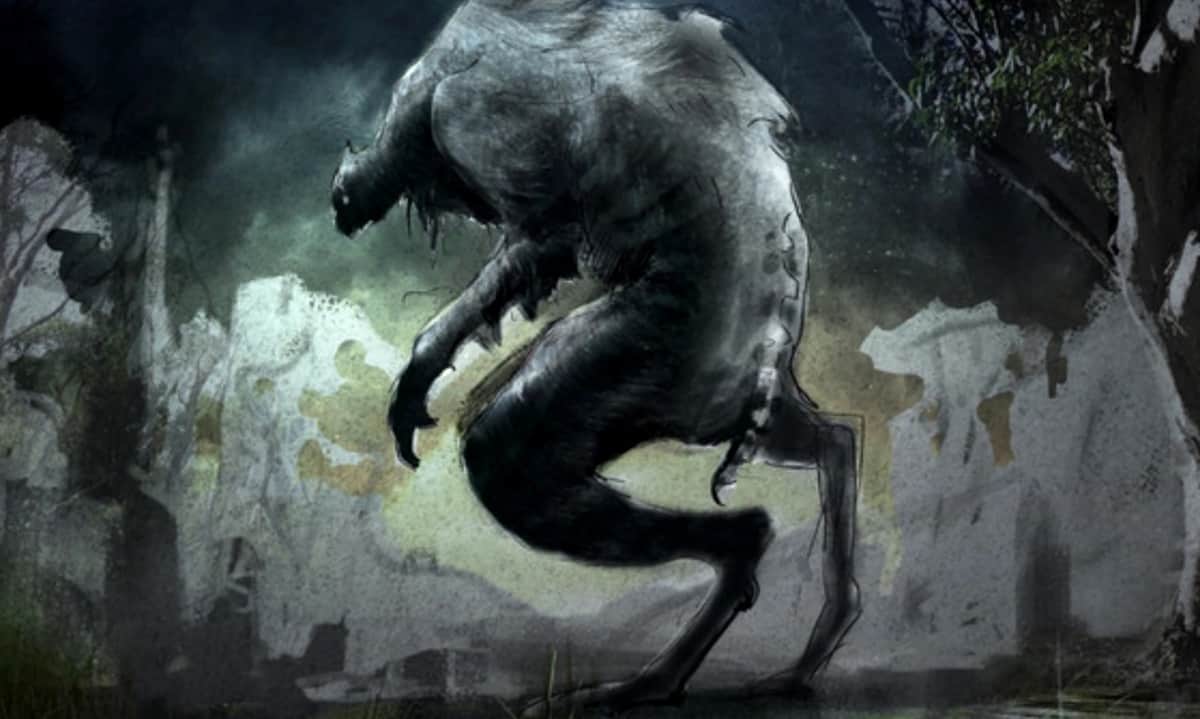 The 10 Most Interesting Australian Mythical Creatures

Australia is known for being home to some of the world’s most dangerous creatures. From deadly spiders to poisonous snakes, it feels like something will get you at every turn. But it’s just not real-life critters you need to look out for Down Under. There is a host of Australian mythical creatures that live in the bush and stalk the outskirts of the big cities.

Many of these Australian mythical creatures are part of Indigenous folklore. They have been part of the local people’s culture for some 65,000 years. While many will say they don’t exist, sightings throughout the years lend credence to some of these so-called mystical creatures actually being real.

Whether you believe is up to you, but many of the Indigenous people think these creatures exist. So here are 10 of the most interesting Australian mythical creatures for you to judge whether they are real or not. 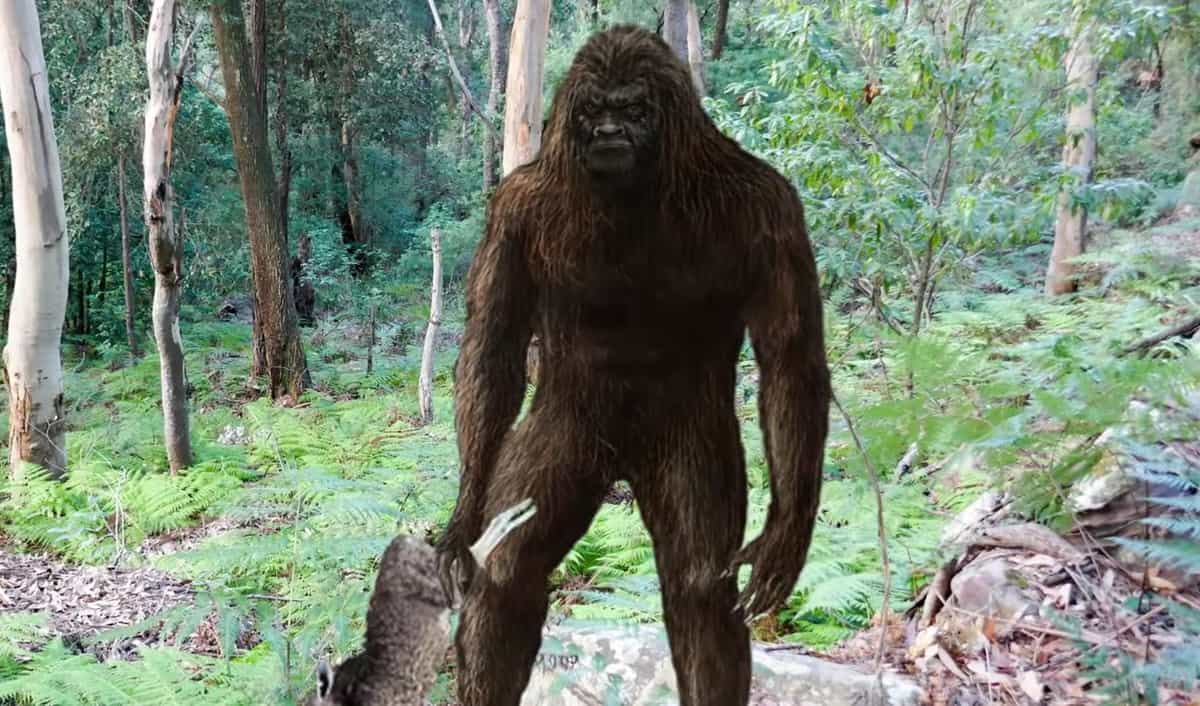 This humanoid creature goes by many different names, depending on part of Australia you come from. In New South Wales it goes by several names, including Ghindaring, Myngawin, and Thoolagal, while in Queensland it goes by the name Quinkin and Joogabinna. But its most common name is the Yowie.

The Yowie is a hairy, ape-like monster standing well over six feet tall. They have large feet with a flat nose and are said to be very hard to track. Personality-wise they vary from being shy and timid to aggressive and violent. The first sightings of this mythical creature date back to the 1850s, with the local papers describing the Yowie as an ‘Indigenous ape.’ Since then there have been multiple reports of Yowies throughout Australia, with one man even comparing the Yowie to Chewbacca from Star Wars. 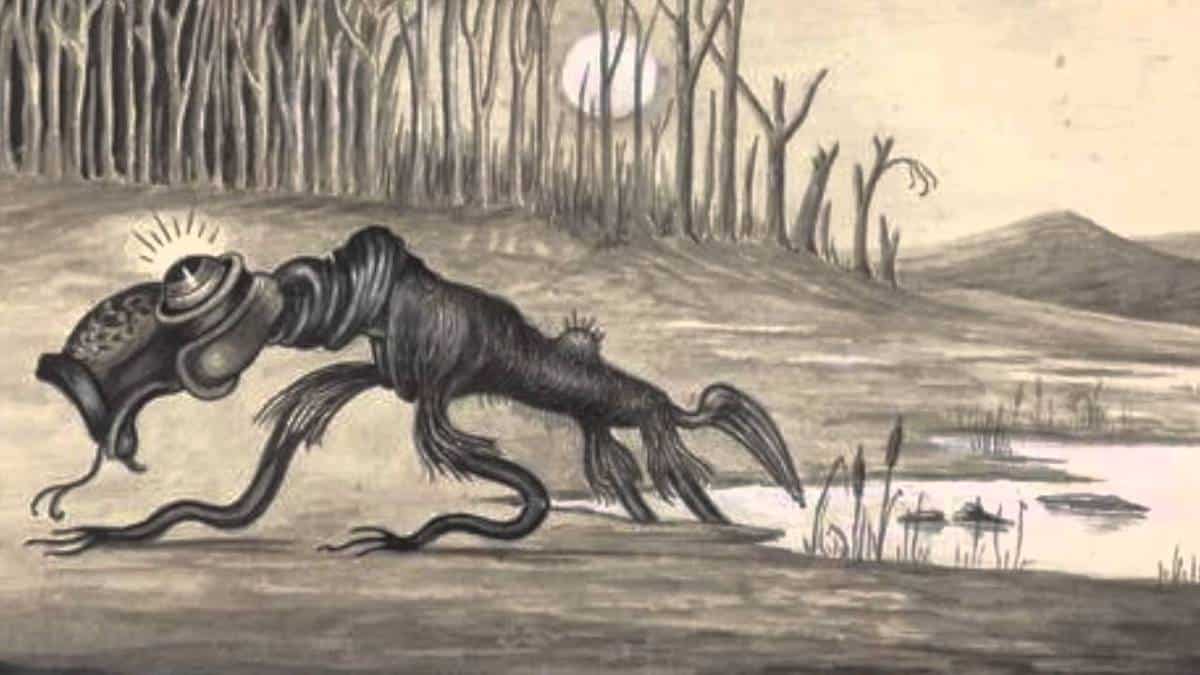 The Bunyip is a dog-like animal said to live in and near the water. Most often seen near waterholes, swamps, and billabongs, the Bunyip is often described as looking like some sort of dog meets seal creature. Varying reports throughout history say it is covered in fur, has large ears, a horse-like tail, and small tusks. They are meant to be good swimmers and their demeanor varies depending on each Indigenous tribe. Some believe it to be a water spirit that protects the fish and other sea creatures in lakes and reservoirs, while others say it is a violent predator that feeds on humans, particularly women and children.

The earliest report of a Bunyip was in 1818 when explorers Hamilton Hume and James Meehan found a strange carcass at Lake Bathurst in New South Wales. The majority of reports of this mythical creature came during the mid-1800s, with few modern sightings having had occurred. Today it features more in other media properties, such as books and video games, than it does in real life. 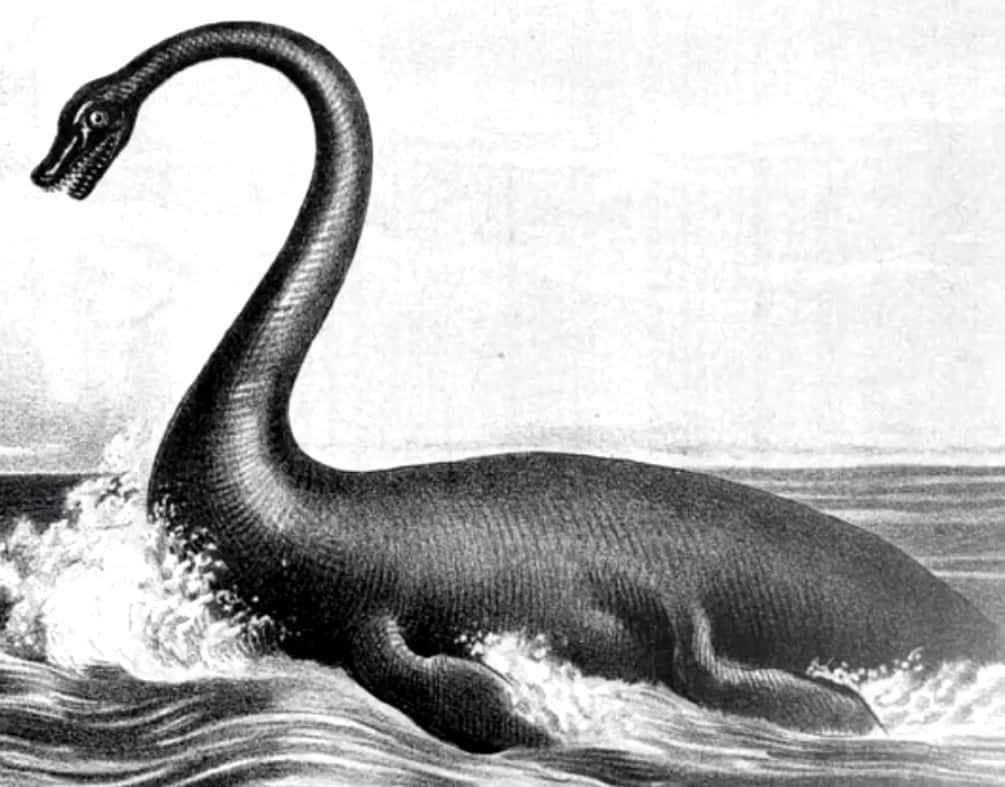 Australia’s own version of the Loch Ness Monster is said to reside in the Hawkesbury River in New South Wales. This water creature is believed to have existed for thousands of years, with the Dharuk people having created rock paintings depicting the creature. Similar to Loch Ness, the Hawkesbury River Monster resembles a prehistoric dinosaur and has a thick body, long neck, and flippers. There have been countless sightings of this monster over the years but nobody has managed to get a clear picture of the beast. In the majority of accounts, the Hawkesbury River Monster doesn’t seem to be aggressive. It stays away from humans and regards them with curiosity before disappearing below the surface. 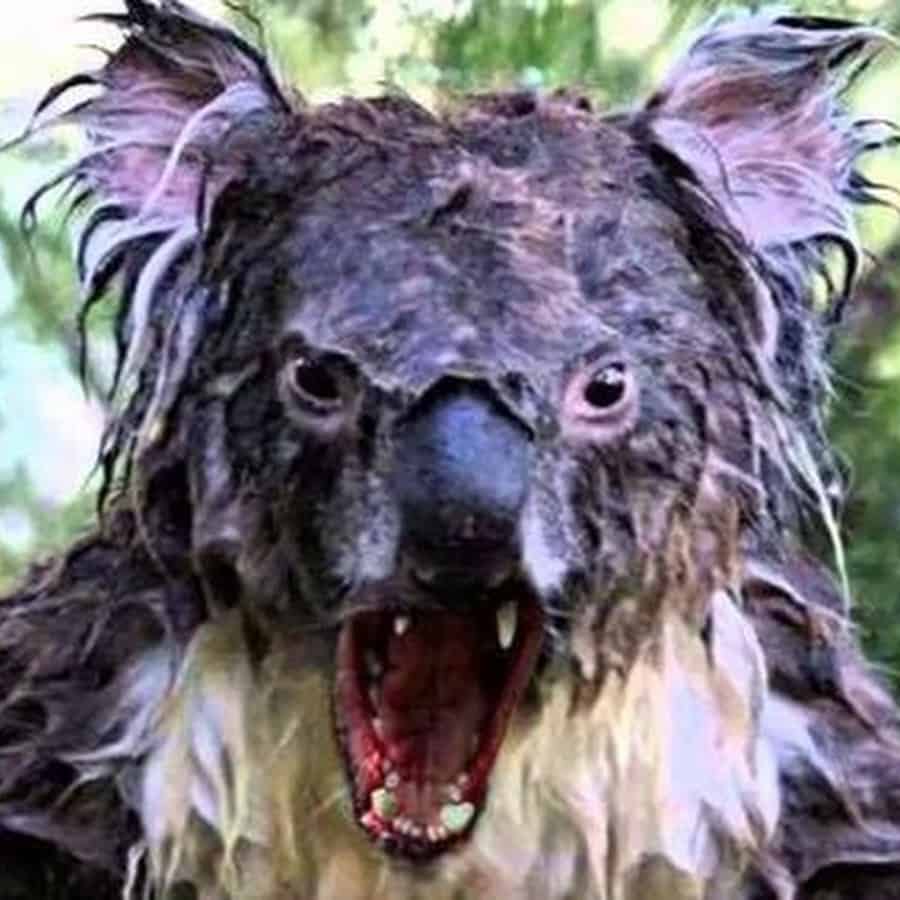 This riff on the cuddly koala is said to be a marsupial that inhabits the tops of trees. Large and vicious, Dropbears are said to attack unsuspecting people who walk past by dropping onto them from the trees above. They are believed to mainly attack foreigners and the best way to stop being a target is by placing forks in your hair, dousing yourself in urine, or putting vegemite under your armpits.

While the Australian Museum does include a serious write-up about the Dropbear, most understand it to be a hoax conjured up by locals to scare tourists. There has never been a real sighting of this Australian mythical creature but it remains a popular animal that has featured in everything from movies to advertisements for Bundaberg rum. 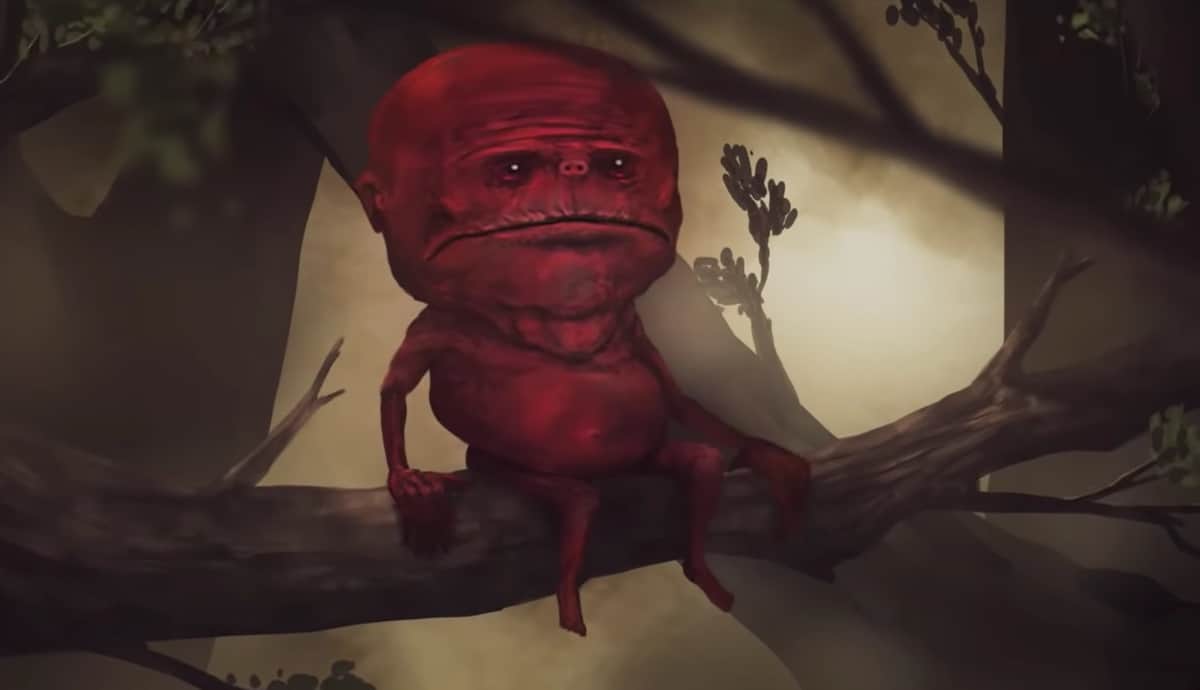 Now here is a creature that would get your heart pumping if you encountered it in real life. The Yara-ma-yha-who is a vampire in Indiengous mythology. While resembling a man, this bloodsucker is a red, frog-like man with a large head and big mouth that has hands and feet with suction grips.

Unlike your typical vampire who hunts at night, the Yara-ma-yha-who is strickly a day hunter. The creature lies in wait by hiding in trees before dropping down on its unsuspecting victims. It then uses its suckers to drain the blood from the unlucky passerby. Then it swallows the body, takes a nap, and regurgitates the human. The good news is if you suffer this ordeal you will be fine, although your skin might have a tinge of red. If you are unlucky enough to be digested multiple times you will eventually transform into a Yara-ma-yha-who yourself. 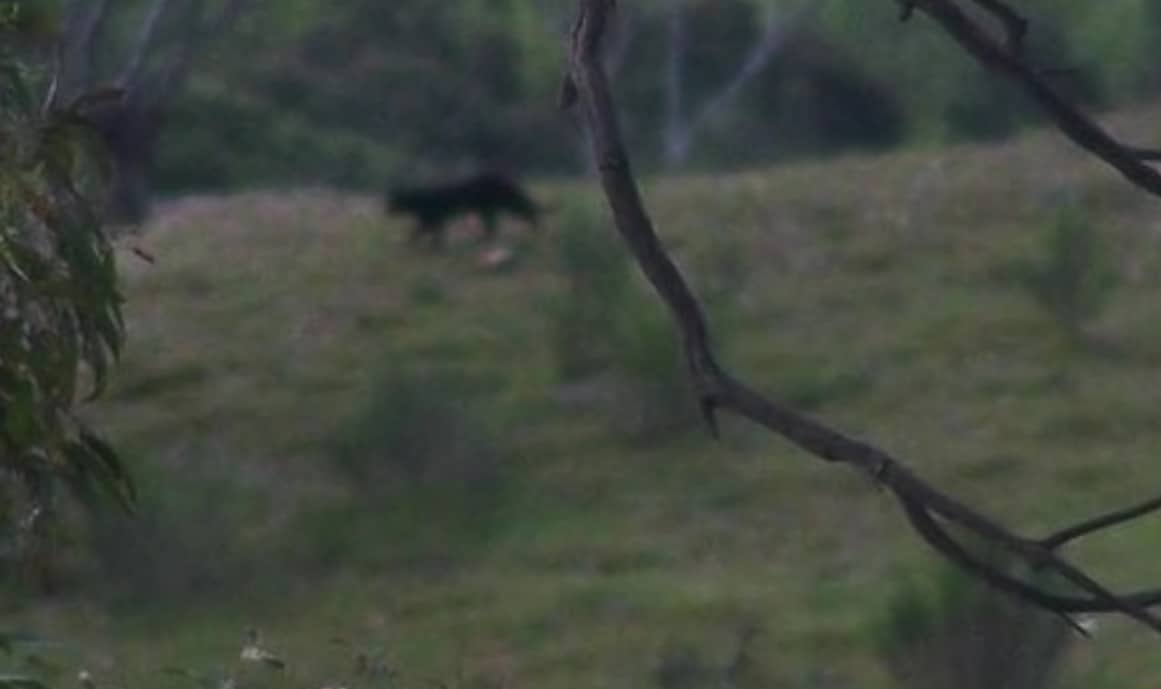 The last thing you would expect to see in the Australian bush is a panther, but apparently one prowls the Blue Mountain region. The panther is said to have escaped from a circus or is a descendant of the big cat’s American soldiers released in Australia during World War II.

There have been over 500 recorded sightings of the big cat over the past 20 years. Hair and stool samples collected by the district veterinarian of the Moss Vale Rural Lands Protection Board concluded that some type of large Panther does exist in the area, although they haven’t confirmed it to be a panther. 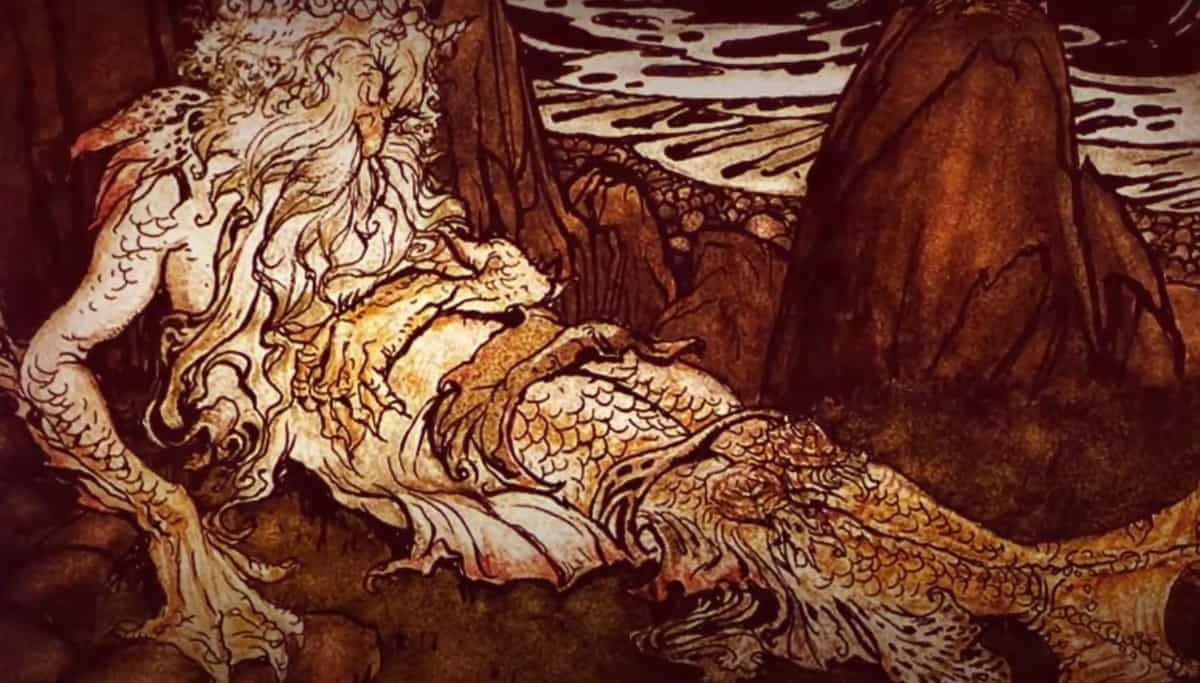 This creature from Australian Aboriginal mythology is another water-dwelling animal. The Muldjewangk inhabits the Murray River and Lake Alexandrina in South Australia. It looks like a cross between a man and a fish (some sort of mare-man) and there is no clear definition if there is just one creature or many.

Aboriginal folklore tales of the Muldjewangk were told to scare children from playing near watering holes at night. If you get too close the Muldjewangk will jump out and take you. Despite being a myth, there is a legend that tells of European settlers on a steamboat who were attacked by the Muldjewangk. Grabbing his gun to protect himself and the crew, Aboriginal elders on board warned him to leave the creature alone. Of course, like most white men, he ignored the warning and shot the Muldjewangk. Not long after the captain broke out in painful blisters all over his body. Six months later he was dead. Moral of the story: listen to your elders. 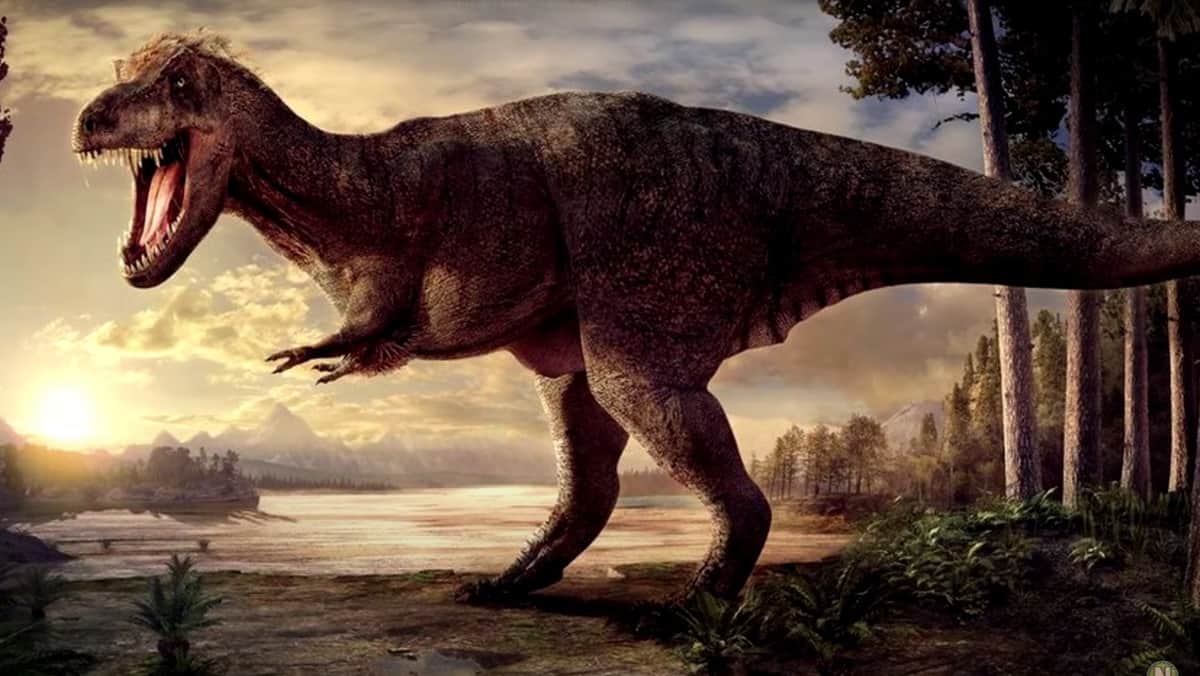 The Burrunjor is a giant lizard creature said to be a descendant of the. T. Rex. The giant reptile has been reported to walk on two feet. They are said to be 20-25 feet in length and have small clawed hands. Sightings of this mythical creature were rampant between the 1950s to the late 1980s. The local Aboriginal Australian people refer to the Burrunjor as ‘Old Three Toes.’ It feasted on native animals such as kangaroos, as well as European settlers’ livestock.

The last official sighting of the Burrunjor occurred way back in 1985. A family traveling to Roper River claimed to have seen a being resembling this mythical creature. Since then it has stayed hidden for decades, but the locals believe the Burrunjor is still out there. 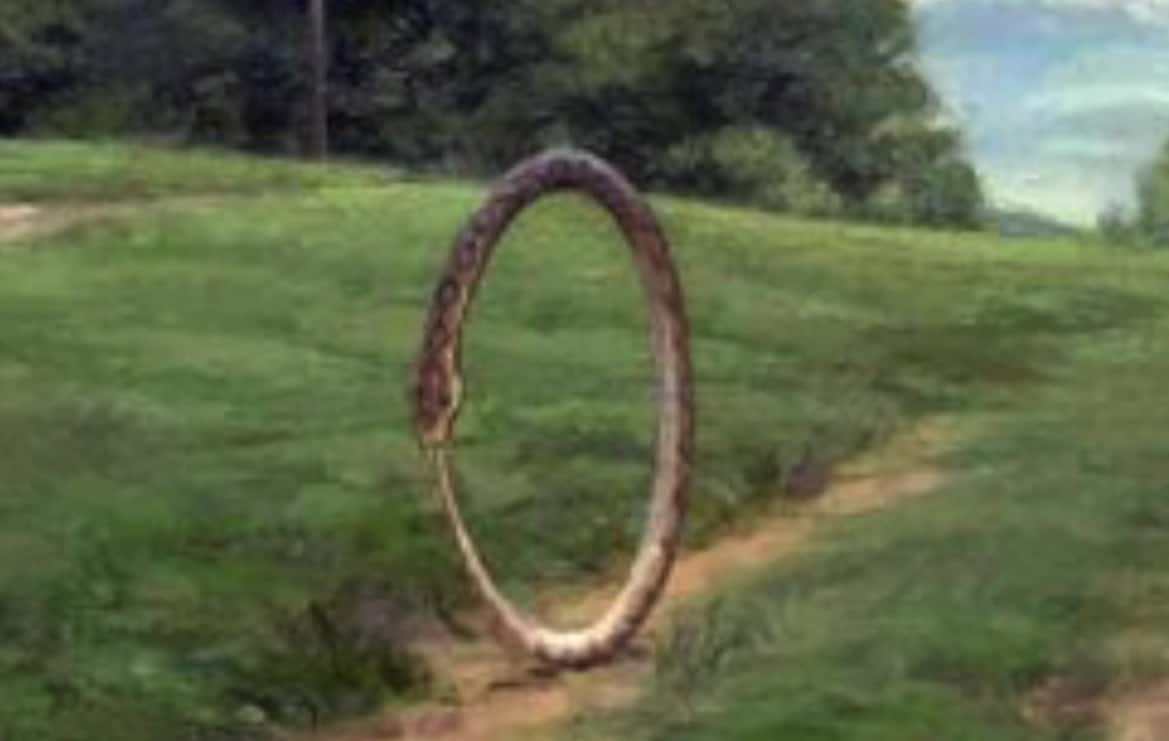 Snakes are bad enough, but one that is smart enough to turn itself into a makeshift wheel to roll after its prey is terrifying. The Hoop Snake can do just that. It is able to put its tail between its mouth to form a circular shape so it can roll along the ground. Once they reach their prey, the Hoop snake extends itself into a straight arrow and launches at its victims. They can grow up to four feet and are capable of speeds of up to 37 mph, which is insane. Thankfully these legendary creatures are just that, legend, but there are plenty of snakes in Australia you need to be wary of. 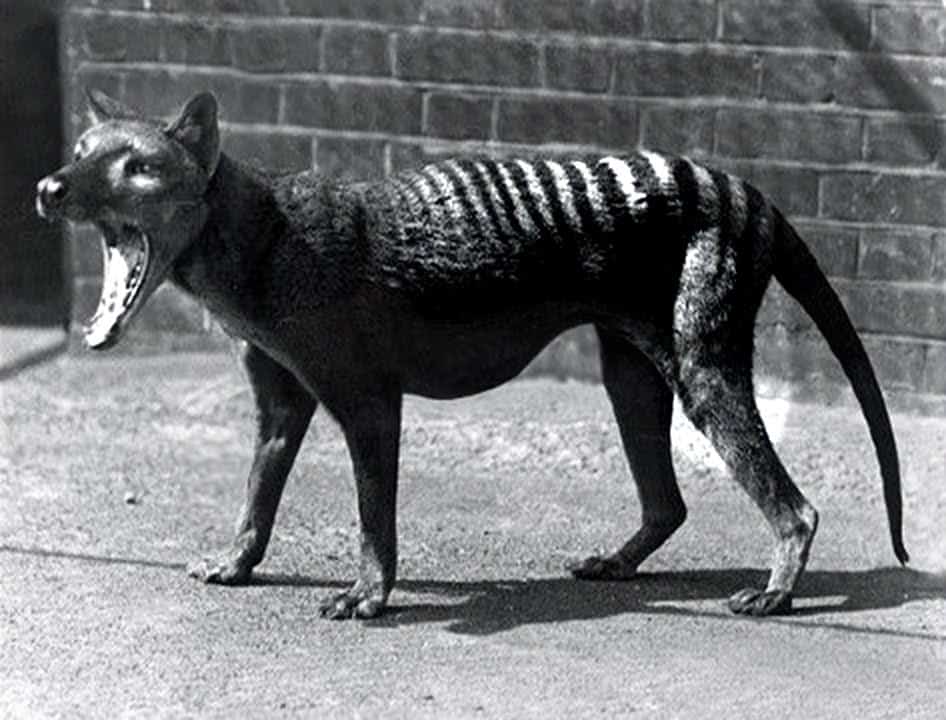 Ok, this one isn’t a myth. The Tasmania Tiger actually existed and has been well documented throughout Australian history. Officially known as a thylacine, this native marsupial resembles a small wolf with a stripped lower back similar to a tiger. This is where it gets its name from. The last known thylacine died in captivity at Tasmania’s Hobart Zoo in September of 1936. They are believed to have gone extinct due to increased hunting by European settlers and new diseases introduced by dogs and humans. While they may no longer exist, there continue to be sightings of the Tasmanian Tiger to this day. Similar to the Burrunjor, many still think the Tasmanian Tiger continues to survive deep in the uninhabited forests of Tassie.