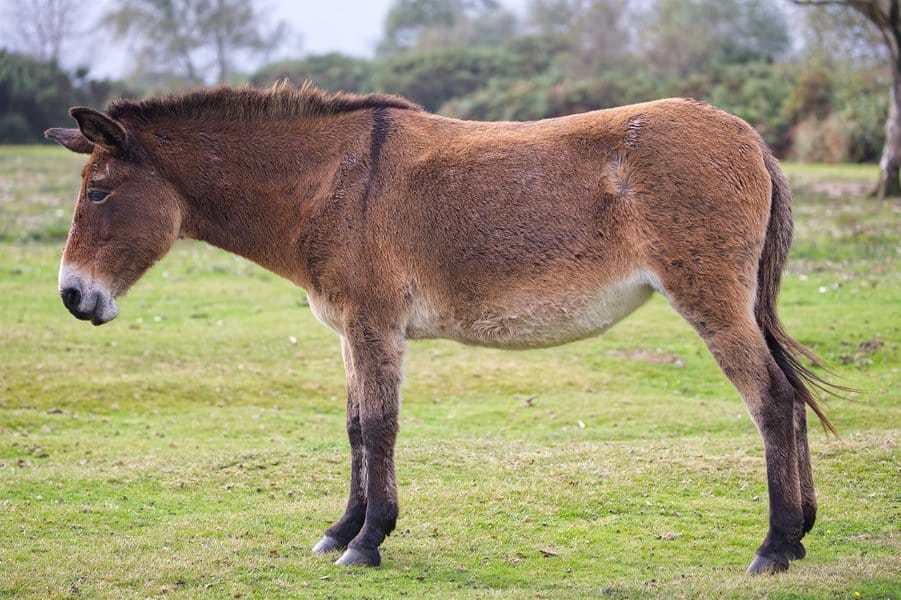 Growing up we learn about the various animals around the globe. Everyone loves domesticated animals like dogs, cats, and birds. Then there are farm animals such as goats, cows, and horses. Of course, animals like tigers, lions, and bears, are only found in the wild or at zoos.

For centuries, humans have attempted to crossbreed several animals in an attempt to create new animals with the best traits of their parent species. In some cases, the hybrid animals manage to thrive but are often sterile, but it’s common for the hybrid animal to live only a few years before dying or, in some cases, come out of the womb stillborn.

The world is full of hybrid animals that only the imagination can conjure up. But they’re not some fictional animal terrorizing New York City in the latest summer blockbuster. These hybrid creations are genuine animals that are currently roaming the Earth enjoying life.

It’s very rare, but animals sometimes crossbreed in the wild, but it’s more likely to happen in captivity. It’s common for animals such as tigers, lions, and jaguars to mate, resulting in exotic-looking and dangerous animals. Certain animals, like zebras, are known to crossbreed with every animal in the horse family, leading to some fascinating results. While it’s rare, several animals in the wild or ocean manage to mate, creating new species. It might be shocking to know that these real hybrid animals are roaming the planet. 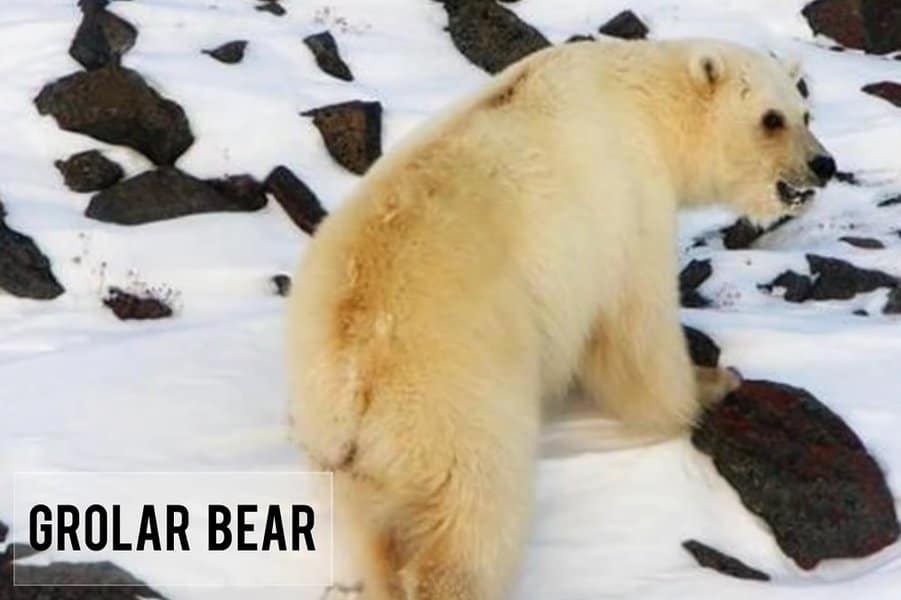 In 2006 in the Northwest Territories, a hunter shot what he assumed was a polar bear. On closer inspection, this particular bear had interesting traits. It had long claws, brown patches around its body, and a humped back, which are common attributes of a grizzly or brown bear. It also had thick white fur like a polar bear. Officials soon realized the hunter had stumbled upon a grizzly-polar bear hybrid known as a grolar bear.

Living in captivity and the wild, there have only been a handful of cases suggesting grolar bears have a polar bear mother and a grizzly for a father. Scientists are still trying to understand the grolar bear’s existence. While grizzly and polar bears come from the same species, they live in two distinct regions. Grizzly bears usually live a terrestrial lifestyle in the woods, while polar bears live on the sea ice. One explanation is that as the winters change, grizzly bears expand their regions and hunt for fish, bringing them into contact with polar bears. 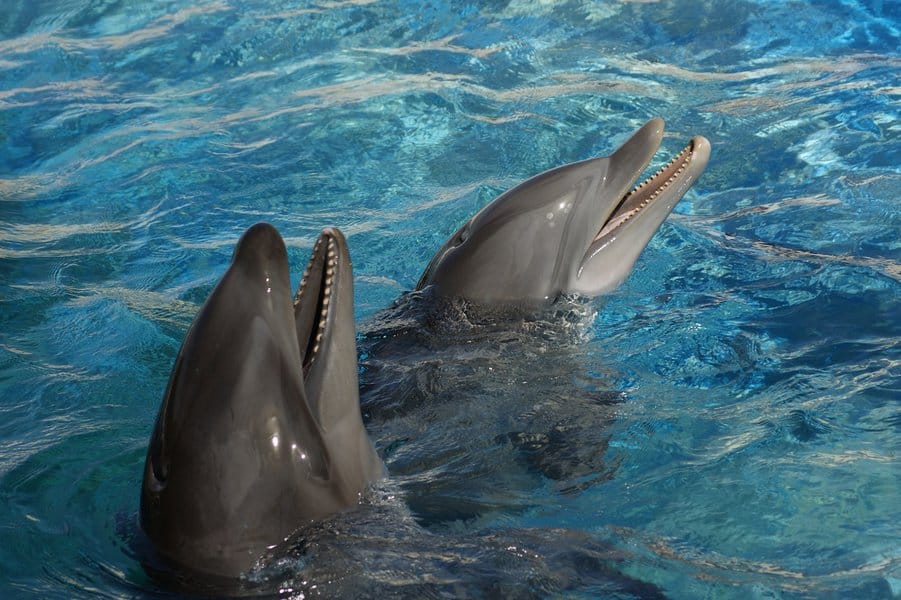 One of the rarest hybrids in the ocean is the wholphin. The wholphin is the offspring of the male false killer whale and female bottlenose dolphin. For the most part, dolphins and whales mate in captivity, although it also happens in the wild. One of the most famous wholphins, Kekaimalu, currently lives with her daughter Kawili Kai at Sea Life Park in Hawaii. 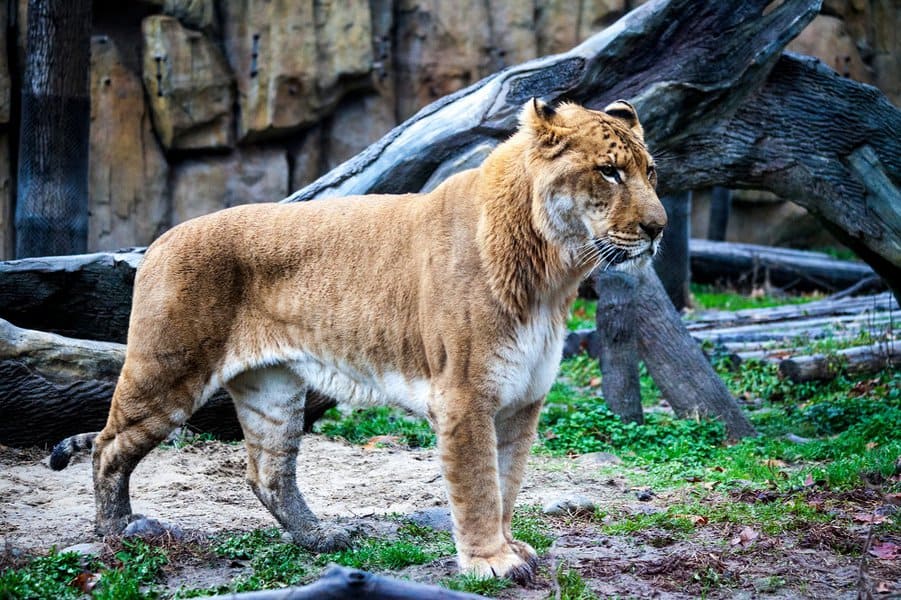 While the lion (Panthera leo) and tiger (Panthera tigris) are different species, they come from the same genus. The offspring of a male lion and a female tiger is known as a liger. Ligers often grow very large and dwarf all other lions and tigers.

Ligers take after their fathers and are sociable animals but also love to swim like their mothers. They’re often sterile and live for an average of 18 years, although they struggle with various health issues, including cancer and arthritis, which can cut their life expectancy short.

While the mule is common, the hinny is quite rare. Furthermore, a hinny has a lighter head, a tasseled tail like its mother, and shorter ears. The donkey-horse hybrid is smaller than a mule in size, with the hinny one of the most fascinating hybrid animals. 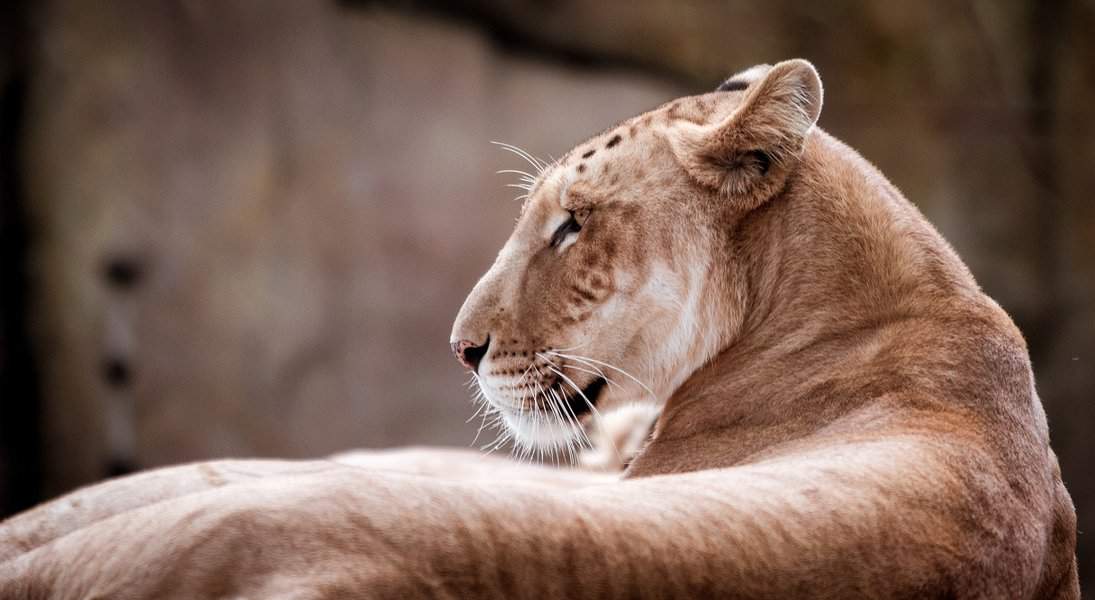 The combination of fierce tiger and fearless lion creates the tigon hybrid. The male tiger and female lion’s offspring differs from the liger, a female tiger-male lion hybrid. A tigon may or may not have a mane, but if they do, it’s more like a lion’s mane than a tiger’s.

They also tend to adopt both the spots of a lion and the tiger stripes. They don’t grow as big as a liger but manage to reach the same size as their parent species. Unfortunately like the liger, tigon struggle with numerous health issues and can’t survive in the wild. 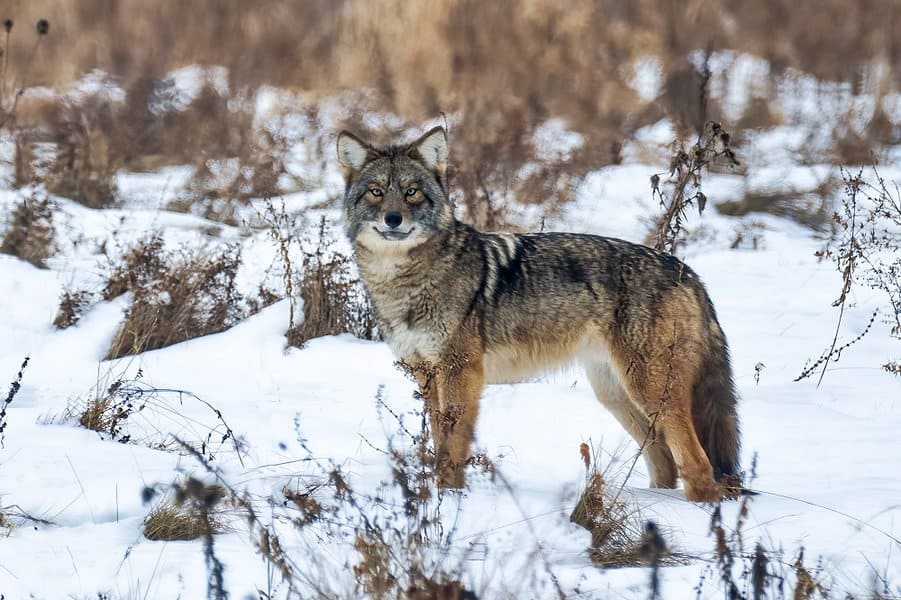 Since gray wolves, coyotes, eastern wolves, and dogs are all Canis, they’re closely related and can interbreed. Coyotes often mate with gray and eastern wolves in the wild. This results in the hybrid animal, the coywolf, being the offspring of these animals.

The coywolf is usually smaller than the average wolf but is much larger than a coyote. Coywolf pups are heavier and larger at birth than coyote pups. The coywolf hybrid often has a howl that starts as low intense vocalization like a wolf but turns into a coyote-like high-pitch yip midway through. 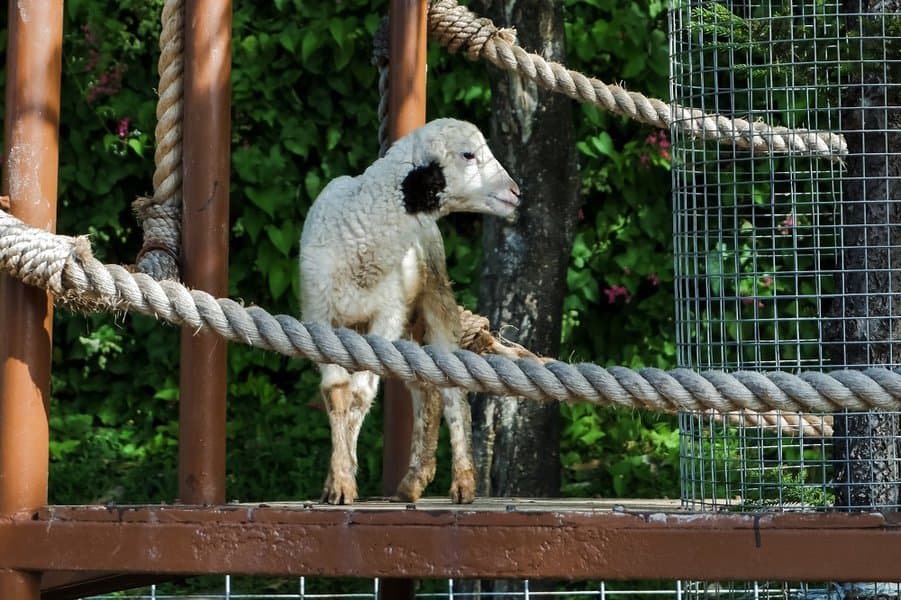 A sheep-goat hybrid is a rare animal that’s the offspring of a goat and sheep. Despite sharing many similarities, the two animals are in separate categories in several ways. For instance, goats belong to the genus Capra while sheep belong to Ovis. Even though sheep and goats have a history of mating, their offspring are usually stillborn and die before taking their first steps.

Also known as geep, a sheep-goat hybrid is very rare due to the difference between goats and sheep. It’s more likely to happen in a lab, where scientists have artificially created a sheep-goat chimera by combining the embryos of a goat and sheep. 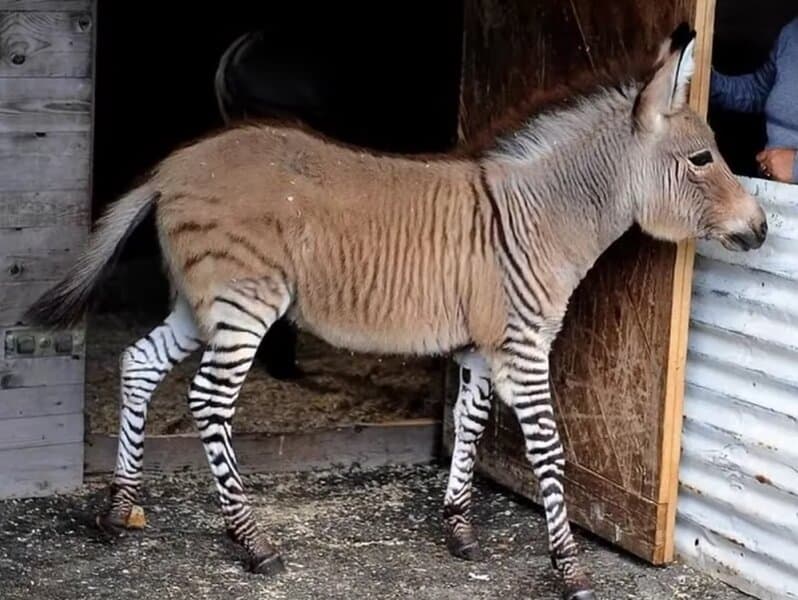 During the third millennium BC, in ancient Mesopotamia and Syria, the kunga was an elite animal that was essential to the economy and politics of the time. The Kingdom of Ebla used the kunga to maintain power and control over the region.

While the breeding process remains a mystery, kunga was the offspring of a female domesticated donkey and an untamed male Syrian wild ass. The kunga disappeared after the introduction of horses at the end of the third millennium BC. 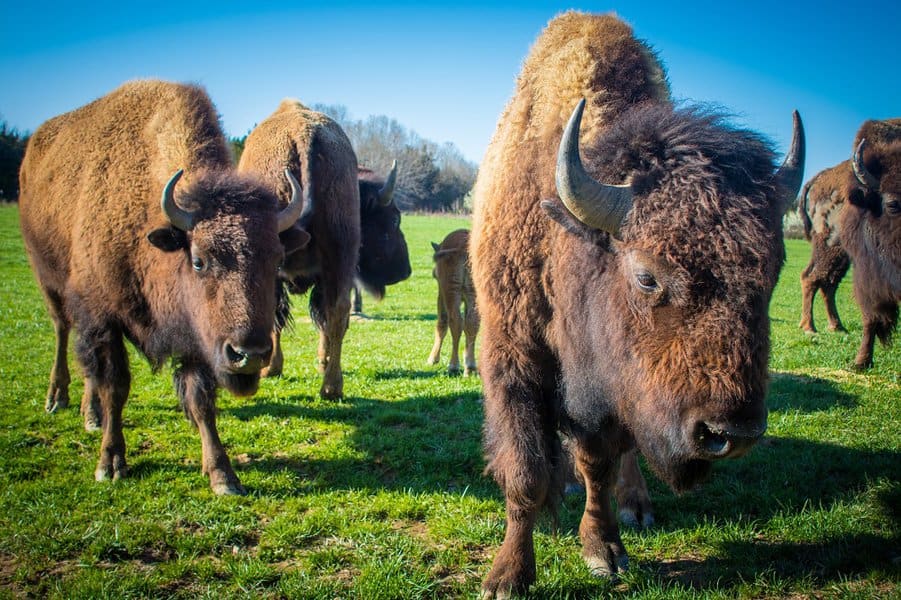 The offspring of domestic cattle and American bison is the hybrid animal beefalo. Mating the female bison and male cattle often occurs in captivity. Since the 19th century, farmers around the globe have attempted to breed the two animals.

The first attempt in the mid-1930s led to the creation of the cattalo. Unfortunately, the cattalo didn’t catch on with the general public. In the 1960s, farmers successfully crossbred domestic cattle and American bison, resulting in the hybrid animal we know as the Beefalo.

See more about - 13 Immortal Animals That Can’t Be Killed 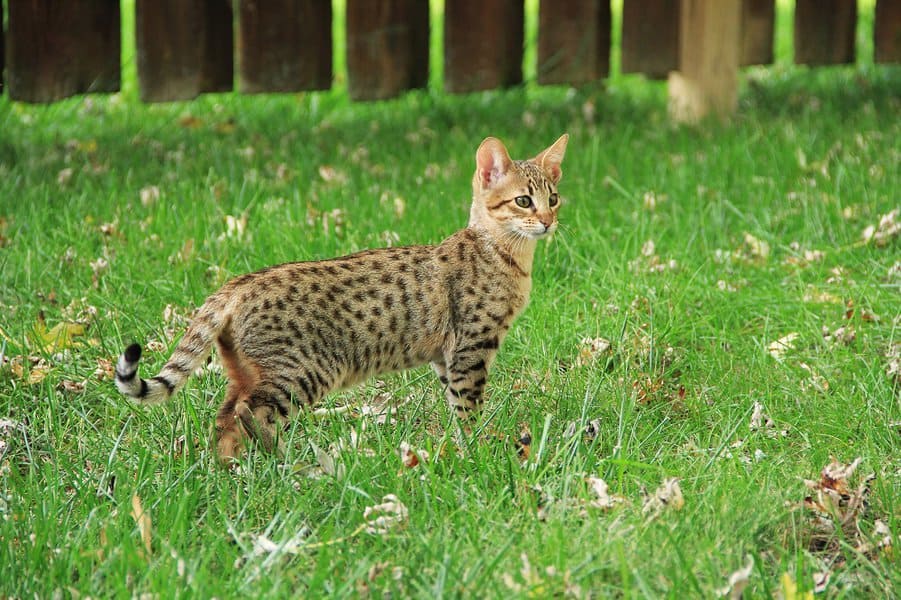 With dynamic spotted coats, Savannah cats are easily recognizable with their large and slender bodies. First appearing in the mid-1980s, a Savannah is a cross between a domesticated cat and a medium-sized wild African cat known as a serval.

For decades there were rumors of a hybrid creature in the sea known as a narluga. A narluga is the hybridization of a female narwhal and a male beluga whale. However, there was only confirmation of the existence of a narluga in the 1990s.

It’s such a rare creature that only 20 known narluga hybrids exist and only seven of those were born in captivity. While they have several beluga traits, they don’t have the narwhal’s tusk or horn. They did inherit spiraled teeth, similar-looking to the narwhal’s tusk. 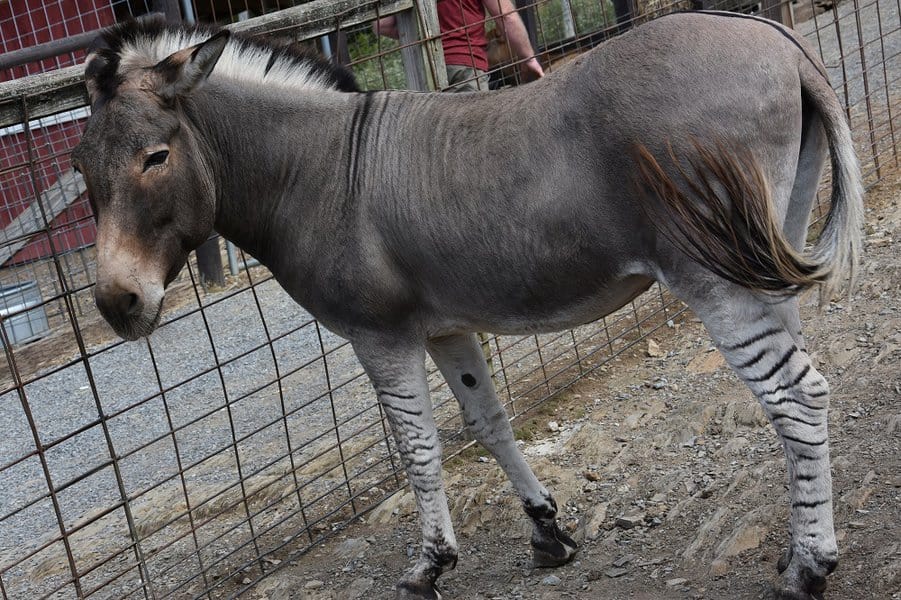 Any animal hybridized with a zebra is known as a zebroid. Hence, zebras crossbreed with several animals of the horse family. For example, a zebra-donkey hybrid is a rare animal known as a zonkey.

While zonkeys are extremely scarce, they are often found in South Africa where zebras and donkeys live near each other. Zebras crossbreed with several other animals as well. 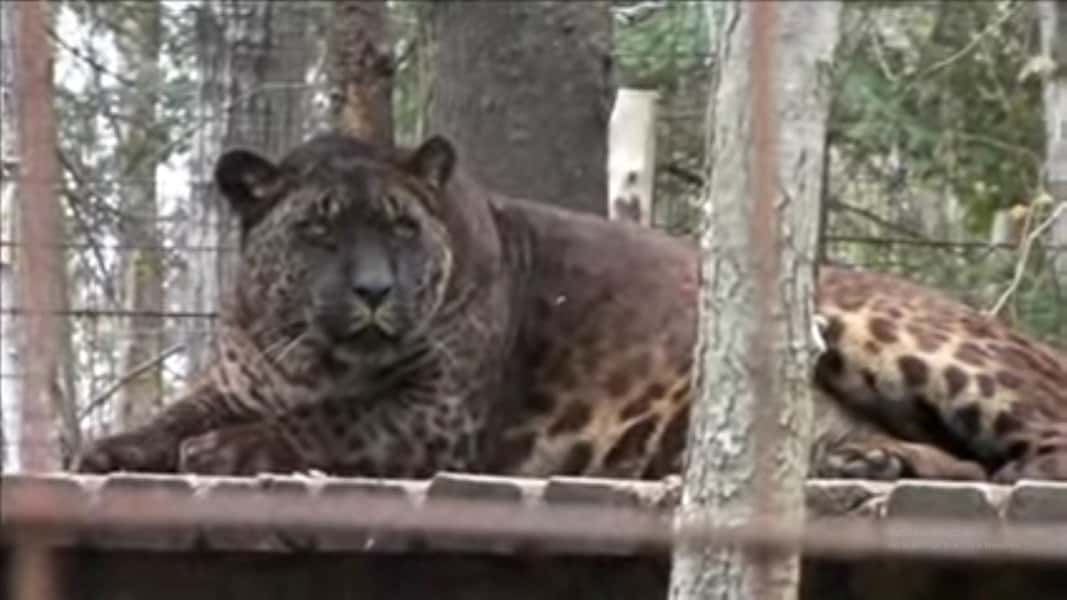 Anytime tigers, lions, leopards, jaguars, and snow leopards crossbreed, it falls under the Panthera hybrid label. Since the animals rarely live in the same regions and have vastly different lifestyles, it’s rare to see them mate in the wild. In fact, most mate in captivity, such as a jaguar and lions. A jaglion is the result of a male jaguar and female lion mating.

At the Bear Creek Wildlife Sanctuary in Canada, a black jaguar, Diablo, and a lioness, Lola, grew up together and were attached at the hip. Unintentionally, Diablo and Lola mated, giving birth to two jaglions, Tsunami and Jahzara. 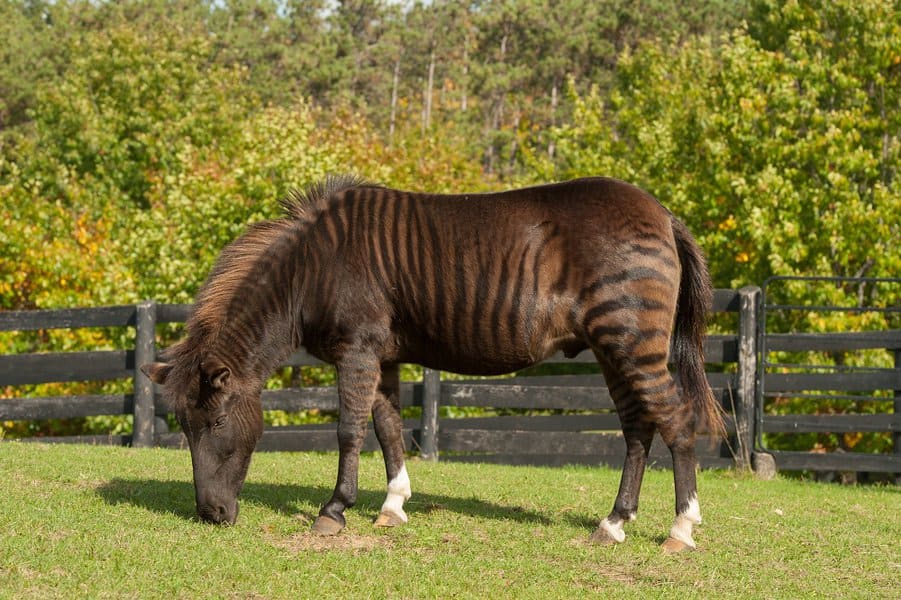 As noted, Zebras often crossbreed with other members of the horse family. The downside is that animals that hybridize with a zebra often result in their offspring having dwarfism. An excellent example of that is the zebra-horse hybrid, zores.

A zorse is the result of a zebra stallion and horse mare mating. The opposite pairing produces a horsebra or hebra. Furthermore, a zorse is often sterile and unable to reproduce. 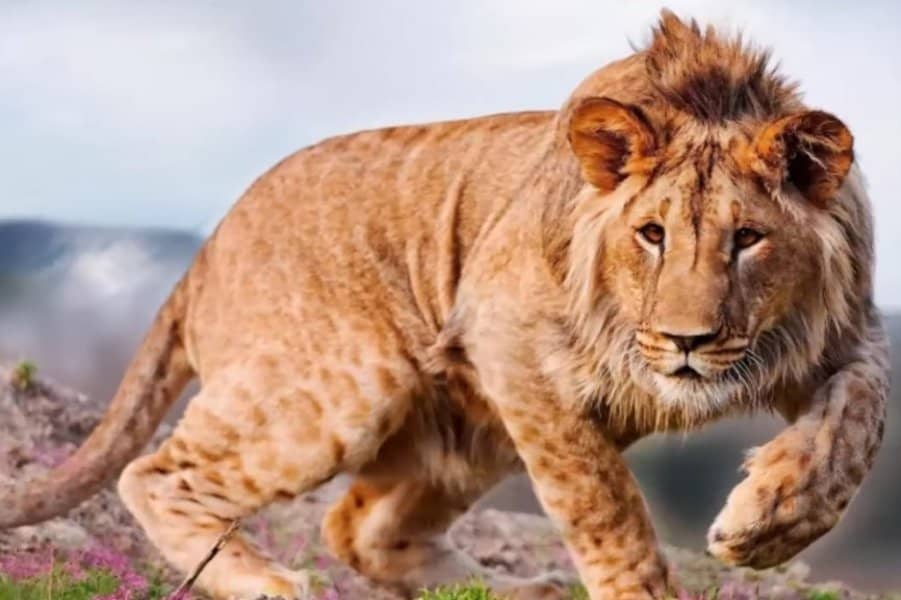 A leopon is another rare Panthera hybrid. The exotic-looking leopon is the offspring of a female lion and a male leopard. It’s a rarity for the two animals to run into each other in the wild.

Leapon’s are usually born in captivity as opposed to the wild. A leopon often takes after its mother and has a similar-looking head, but their bodies resemble that of a muscular leopard. 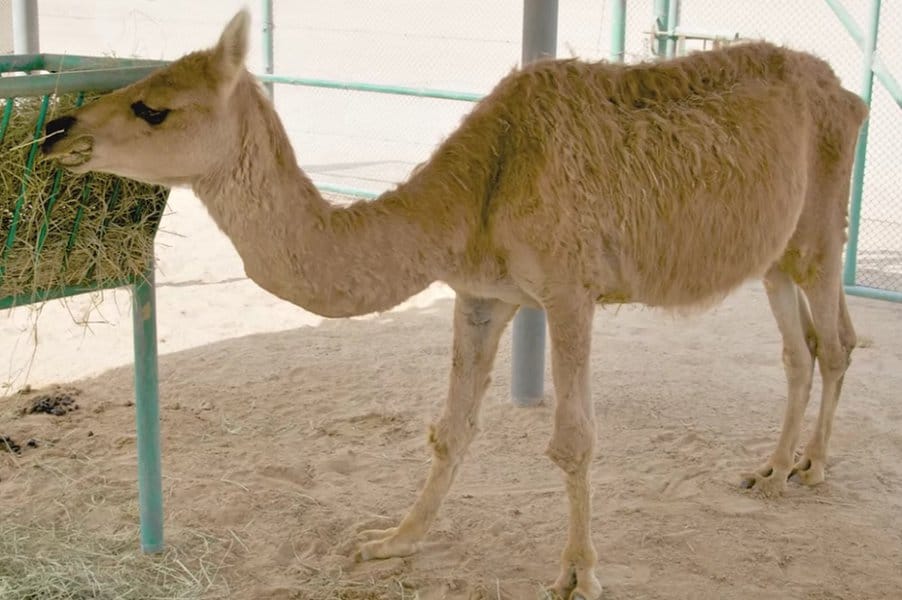 In the 1990s, the Camel Reproduction Center in Dubai sought to create the perfect animal by hybridizing a camel with a llama. The goal was to combine the camel’s easy-going nature, size, and strength with the high wool production of a llama. The center created the first camel-llama hybrid, a cama, using artificial insemination.

Since that time the center has made five camas with varying levels of success. For instance, one cama displayed a llama’s stubborn behavior instead of a camel’s cooperative temperament. 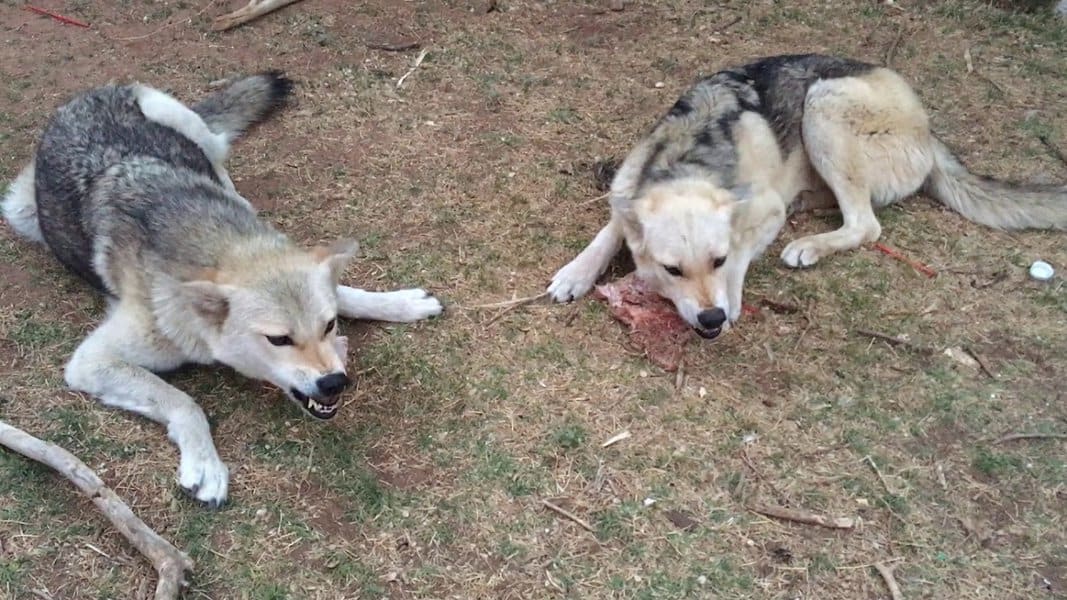 Coyotes and dogs have been crossbreeding for centuries, even before humans had the idea. Coydogs are extremely rare in the wild. A coydog is the offspring of a female dog and a male coyote. The opposite pairing produces the dogote.

See more about - What Animals Cause The Most Dangerous Bites?