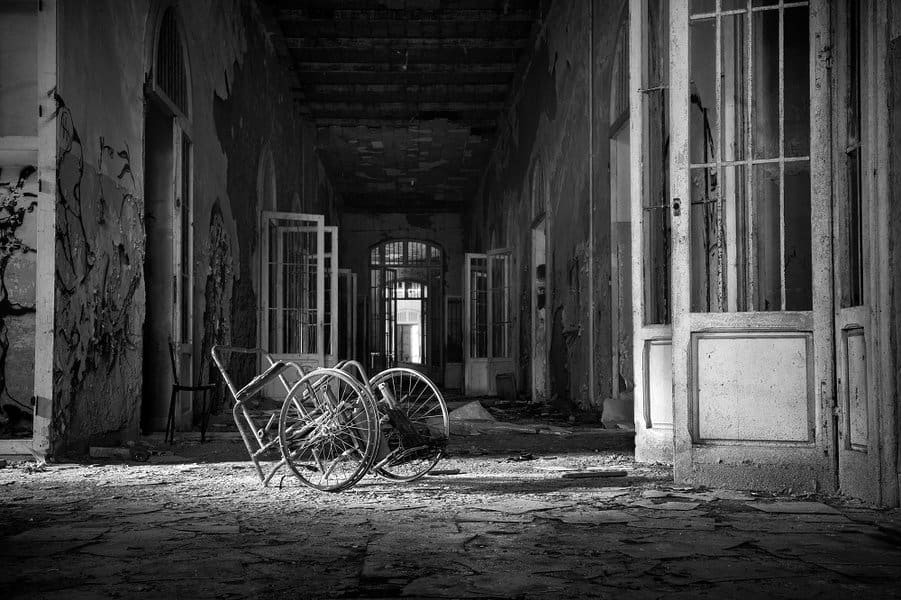 11 Real Insane Asylum Pictures Sure To Give You a Fright

Insane asylums, or psychiatric hospitals as we call them these days, are places where the mentally ill can be supervised and get the help they need. Throughout history, there have been many different facilities around the world where people have gone to receive treatment for their problems. The majority of modern psychiatric hospitals are well-designed places with all the amenities needed to treat patients, but this wasn’t always the case.

As these real insane asylum pictures presented below illustrate, these types of facilities weren’t always up to scratch. Many were responsible for terrible atrocities committed against those who stayed there. The buildings of these asylums have been destroyed or left to decay after being closed. Along with photos of abandoned asylums, we’ve also included some photos of those who spent time at these facilities. Be warned, some of these images are slightly disturbing.

11 Real Insane Asylum Pictures Sure To Give You a Fright 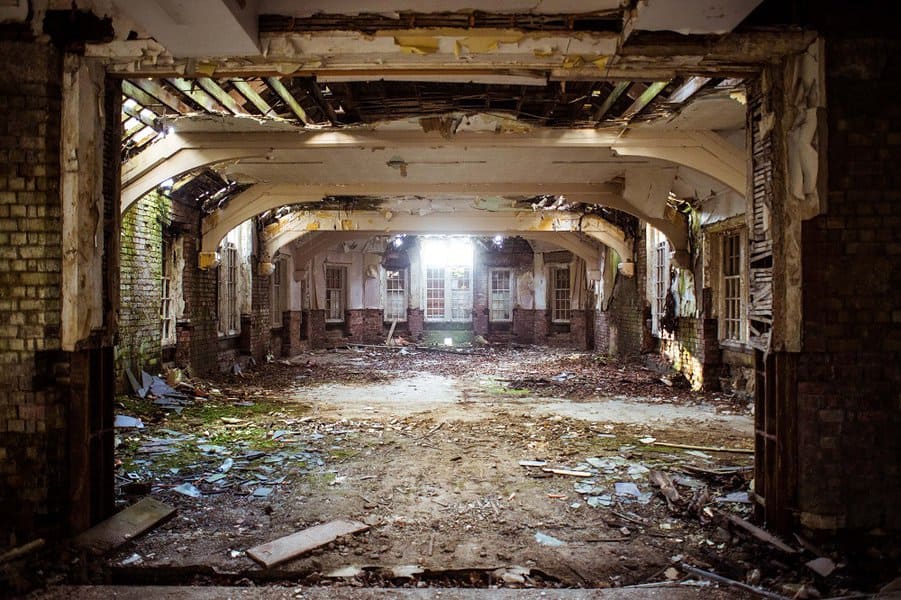 This is part of what’s left of Denbigh Insane Asylum. Designed by architect Thomas Fulljames, it took four years to complete the North Wales Hospital, with the building officially opening its doors in 1848. It was originally only meant to hold 200 patients but halfway through the 20th century, that number had skyrocketed to 1,500.

The healthcare facility was eventually closed in 1995 and fell into disrepute. There have been several fires lit and the remains of the building looted by thieves. The land the building sits on was purchased by Denbighshire Council in 2018 and is set to be turned into housing in the near future. 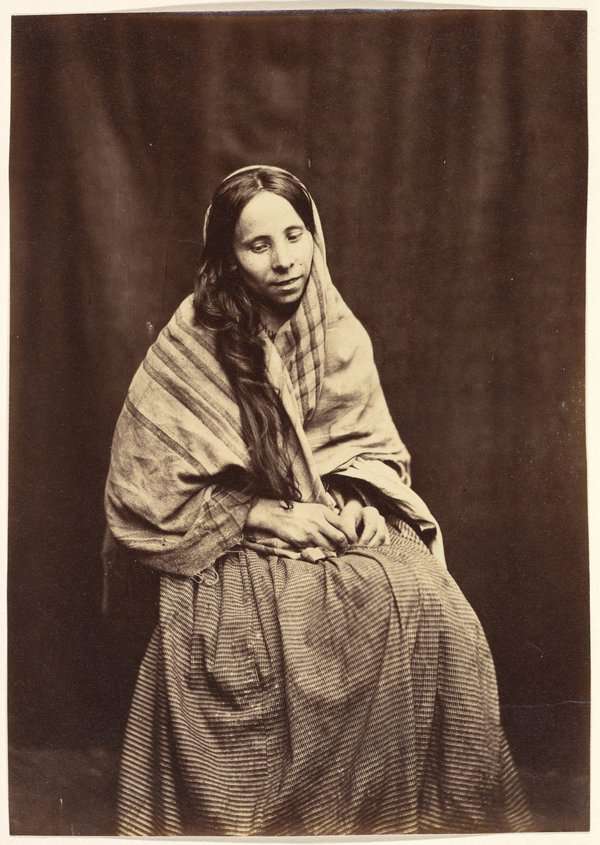 This photo is of a woman who was a patient at Surrey County Lunatic Asylum. The facility opened in 1841 and this image was captured by photographer Hugh Welch Diamond sometime between 1850 – 1855. He was the Superintendent of the Female Department of the Surrey County Lunatic Asylum and used photography as a way to label the types of mental problems people in the institute suffered from.

He believed he could capture moments in photos that could not be seen in everyday life. He described himself as a photographer who “catches in a moment the permanent cloud, or the passing storm or sunshine of the soul, and thus enables the metaphysician to witness and trace out the connexion between the visible and the invisible.”

There is no account of who this lady was or what was wrong with her, but the photo is a little creepy with the way the woman is not looking at the camera but has a strange grin on her face.

3. Psychiatric Hospital of Volterra in Tuscany

Volterra was a psychiatric hospital in Italy known for its brutal treatment of patients. At its height, it’s believed some 6,000 people lived on the premises at one time, with just 20 sinks and two toilets for every 200 patients. Electroshock treatment was the norm and many new drugs were tested on patients. Nurses were addressed as “guards” or “superiors” and did not allow patients any interaction with the outside world.

Founded in 1888, Volterra remained open until 1978 when Law 180 was passed. This bill – also known as the Italian Mental Health Act of 1978 – saw all existing asylums closed and huge reforms in mental health initiated throughout the country.

Now left in ruins, Volterra Psychiatric Hospital has become a sightseeing attraction for urban explorers. Video cameras have been installed to detract people from entering the facility, but as the image above shows, people are still accessing the asylum. 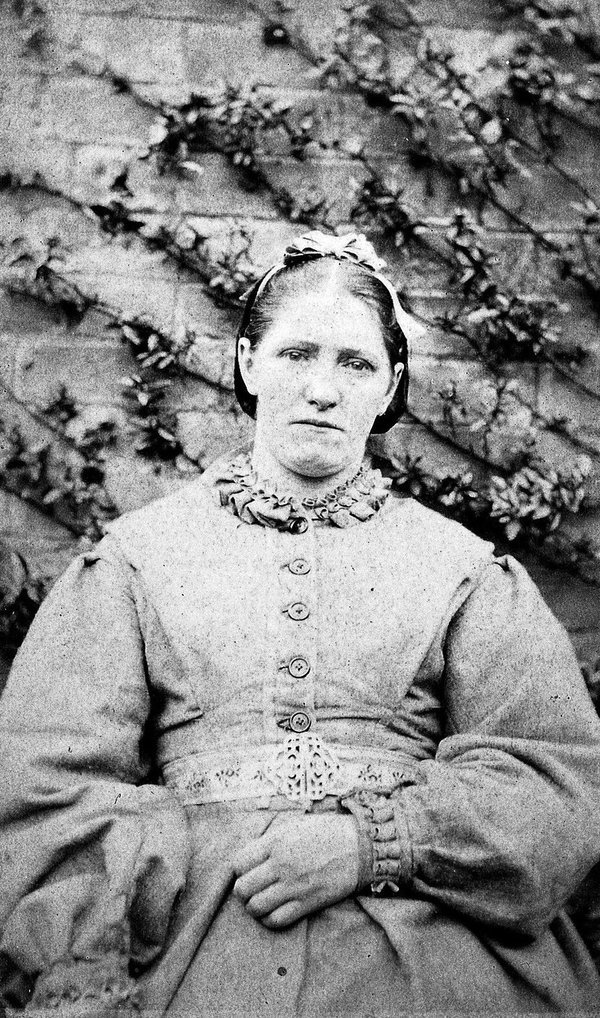 This image is of a female patient at West Riding Lunatic Asylum, Wakefield, York. Her name was Mary Shaw. She was admitted to the asylum at the age of 35 shortly after giving birth to her fourth child who sadly passed away after one week. This was the fourth child Shaw had lost after her first three didn’t make it past the age of two.

The image was taken by David Scrimgeour, with notes saying that Shaw would “send her husband to gaol then get a velvet dress and have a second husband,” due to the black eye he gave her. Shaw most likely suffered from postnatal depression and other mental health issues stemming from the death of her children. She spent almost a year at West Riding Lunatic Asylum before being discharged in good health. 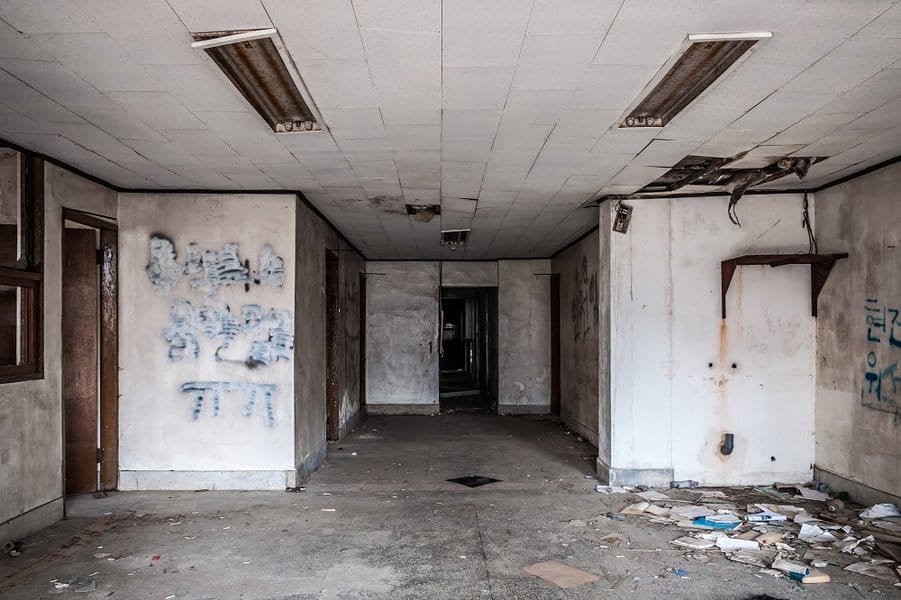 Gonjiam Psychiatric Hospital is another facility with a murky past. Built in 1982 and located just outside Gyeonggi-do, South Korea, this state hospital was open only for 14 years before closing in 1996. There isn’t a heap of information regarding what went on in Gonjiam, but Curious Archive details several horror stories about how the patients were treated at the asylum.

It is believed many patients died mysteriously while staying at Gonjiam. One theory suggests the owner of the building, Mr. Hong, kept patients locked inside the facility against their will and was responsible for murdering many of them. When authorities began to investigate, he fled to America. Another spooky story suggests the doctors and nurses who worked there went insane while working with the mentally ill, leading the director to take his own life.

Both stories, it turns out, are untrue, with the asylum recording no mysterious activity and closing due to financial reasons. That didn’t stop people from trying to explore the location, especially after the release of the film Gonjiam: Haunted Asylum. This found footage horror features a group broadcasting live from the facility when supernatural phenomena begin to happen, putting their lives in danger.

The release of the movie caused a lot of people to visit the abandoned asylum searching for ghosts. It became so bad the area had to be fenced off and Gonjiam was eventually destroyed in 2022. 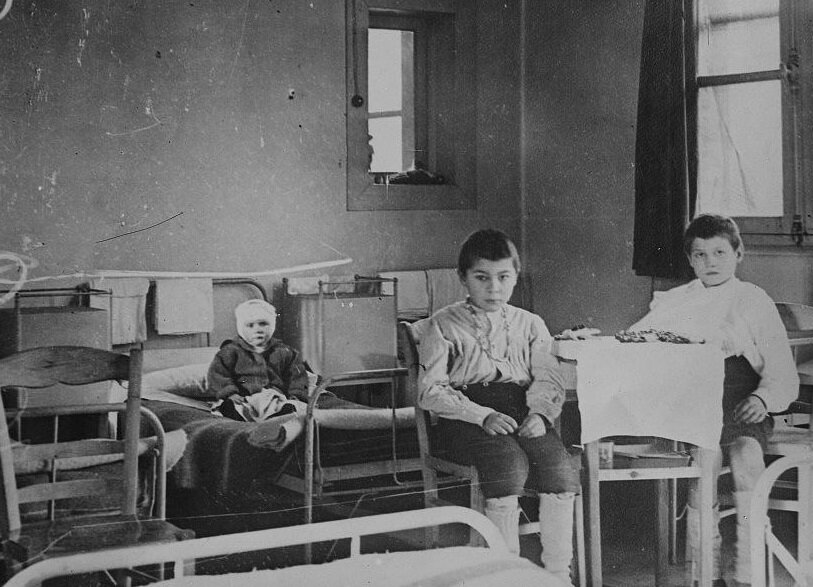 The Library of Congress, Public domain, via Wikimedia Commons

This is another image with not a lot of background. It shows three young children in the Red Cross Asylum somewhere in France. It is not known why they have been committed, but as this facility was owned by the Red Cross, there is a chance they could just be orphans or sick children and not kids suffering from mental illness. Whatever the reason, they don’t look overly happy to be there.

See more about - 15 Creepy, Strange, and Wonderful Abandoned Places You Can Visit 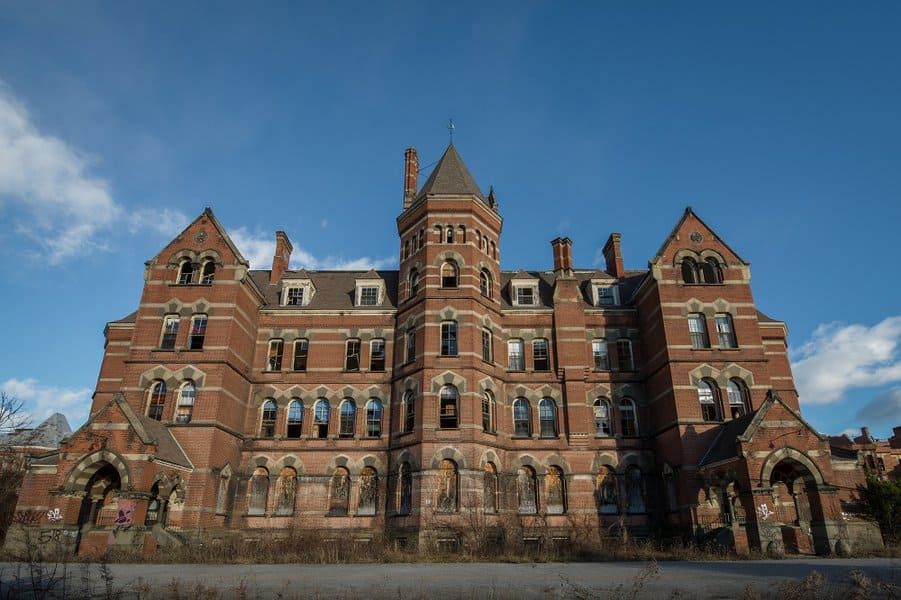 The Hudson State Psychiatric Hospital was in use for over 130 years before shutting down in 2012. The state-run hospital was highly regarded, not due to the way it was run, but by the architecture of the main building. The image above shows the High Victorian Gothic architecture of the main building, known as the Kirkbride, which was the first time it had been used for an American institutional building.

The asylum housed all manner of different patients, from those suffering treatable mental health conditions to the criminally insane. The biggest controversy with Hudson State Psychiatric Hospital was the amount of money spent building and upgrading the facility, with construction ongoing for 25 years after it first opened. The site is now being redeveloped as a residential area. 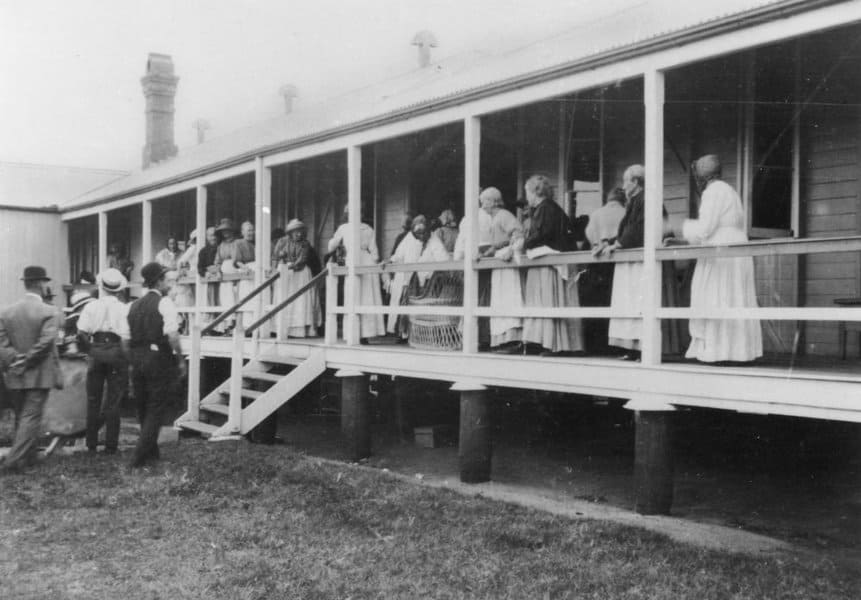 Owned and operated by the Queensland government, Dunwich Benevolent Asylum opened in 1865 and was one of many similar facilities that opened across Australia that housed vagrants, the homeless, and those too sick to look after themselves. Over 21,000 people passed through Dunwich before it was finally closed in 1946.

The above photo shows the women’s quarters, with all those living there standing out front of the building. Much of the property has been destroyed by fires, but those buildings that remain include the heritage-listed St Mark’s Anglican Church and Dunwich Public Hall. 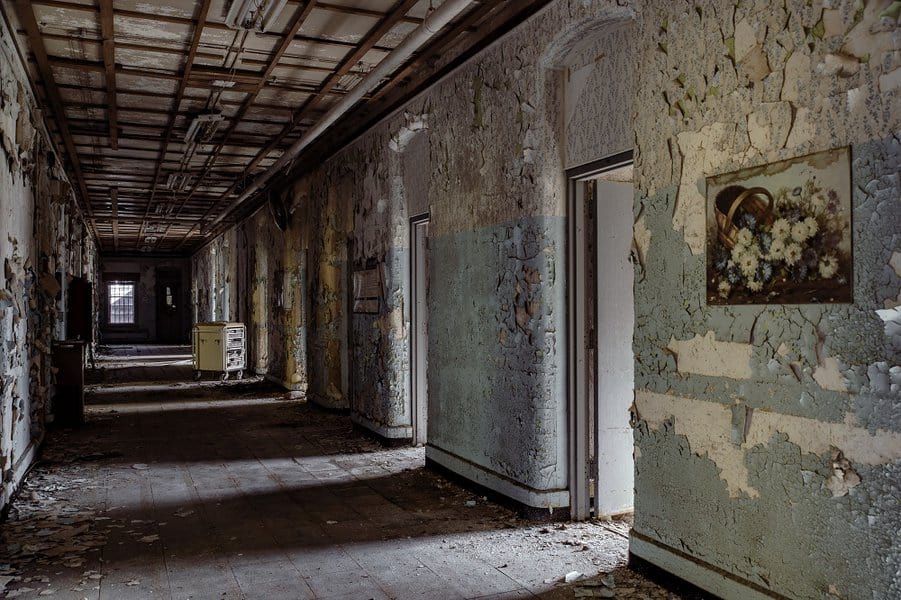 Willard Asylum for the Chronic Insane is now an abandoned psychiatric institution that first opened in 1869. The mental institution was known for admitting patients who had suffered greatly and quickly became the go-to place to send any mentally ill person who was deemed “insane” or “crazy.”

Patients were allowed to wander freely through the grounds, with a bowling alley and movie theatre some of the attractions they could enjoy. But it wasn’t all sunshine and lollipops, with shock therapy and ice baths often used to treat patients. After Geraldo Rivera’s famous 1972 expose of poor conditions at the Willowbrook Asylum, fewer people were admitted to Willard, with the hospital eventually closing in 1995.

9. A patient of the Friern Hospital 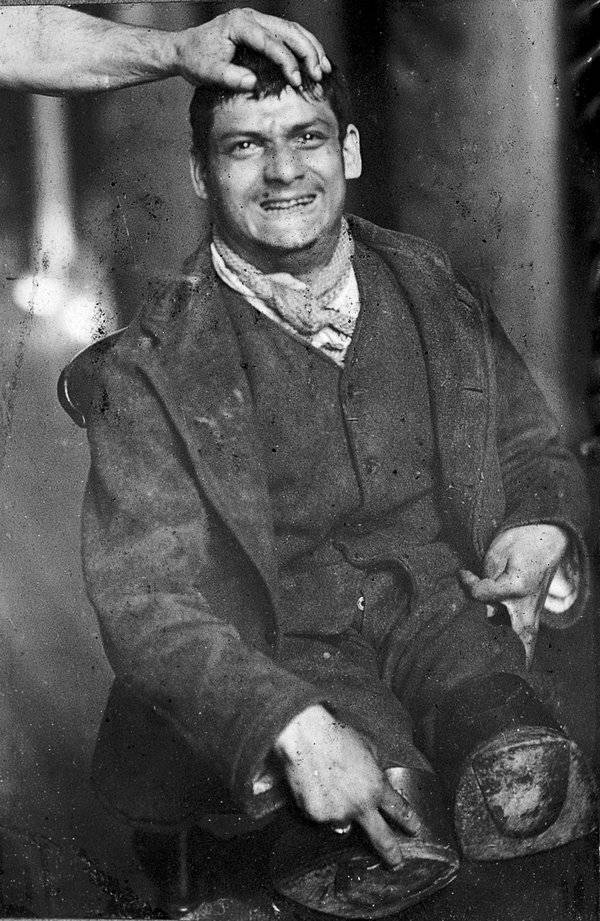 Friern Hospital, or Colney Hatch Asylum as it was also known, was a former psychiatric hospital just outside of London. It opened in 1849 and closed in 1993 and was home to around 2,500 patients with various mental disorders. Several famous people passed through its doors, including singer Adam Ant (following a suicide attempt in 1976) and Aaron Kosminski and David Cohen, who were both suspected of being Jack the Ripper.

The image above is of an unknown man at the facility who had both legs amputated. There isn’t any more information about him or what happened, but he does seem to be in some distress in this photo. 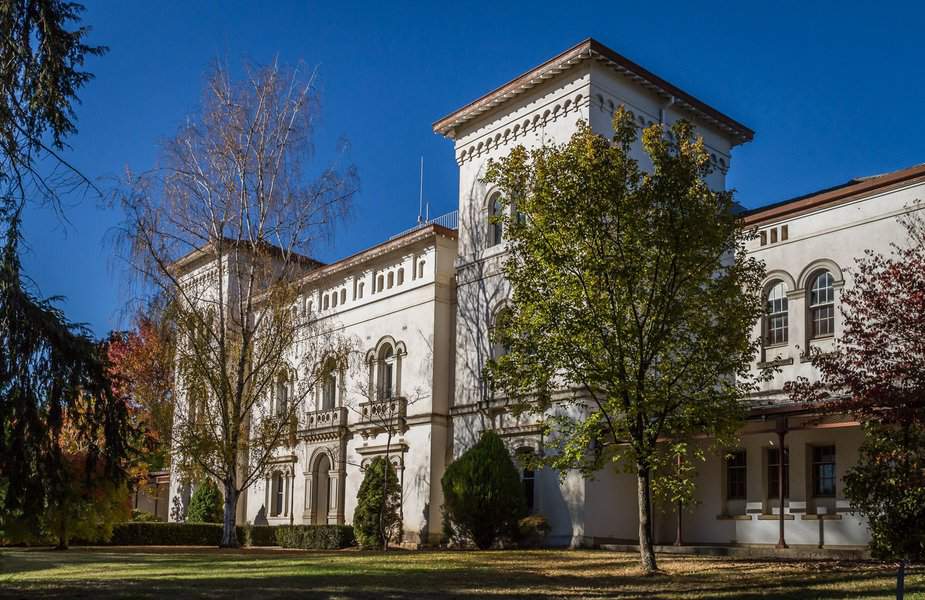 Another Australian hospital for the mentally unstable, Beechworth Lunatic Asylum has a much darker history than others on this list. During its time in operation (1867 – 1995) it’s believed around 9,000 patients died while at Beechworth, with many people who were committed not even suffering from clear mental health issues.

Now owned by La Trobe University, there are still many reports of strange activity occurring on the premises. People who work there have reported seeing floating faces in windows and hearing the laughter of children. The ghost of former nurse Matron Sharpe is said to walk the corridors as if carrying out her nightly rounds while a former groundskeeper has also been spotted around the grounds.

Beechworth Lunatic Asylum is one of the few places people can still visit legally on this list, with nightly ghost tours conducted for those who like a good scare. 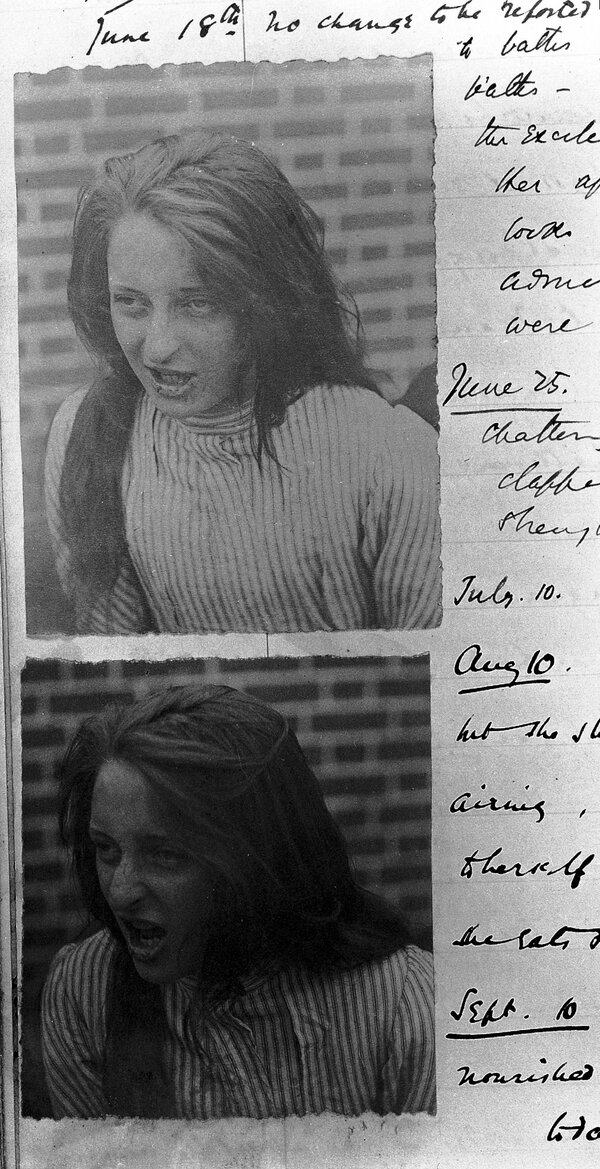 Miss Constance Coddington was a resident of Holloway Sanatorium during the late 1800s. While it is not known why she was committed, the photos show she was in an agitated state when first arriving. Opened by entrepreneur Thomas Holloway, the facility was all about progressive medicine, with the patients being treated with innovative therapies like massage and gym work, although restraints were still used at times for those who got unruly.

A fire broke out at the sanatorium in 1978, destroying many buildings and causing thousands of dollars in damage, leading to the facility closing two years later in 1980. The area is now home to a gated community although several of the old buildings that made up the sanatorium have been restored and remain as the last evidence Holloway Sanatorium existed.

See more about - Signs Of A Psychopath: 18 Things To Look Out For