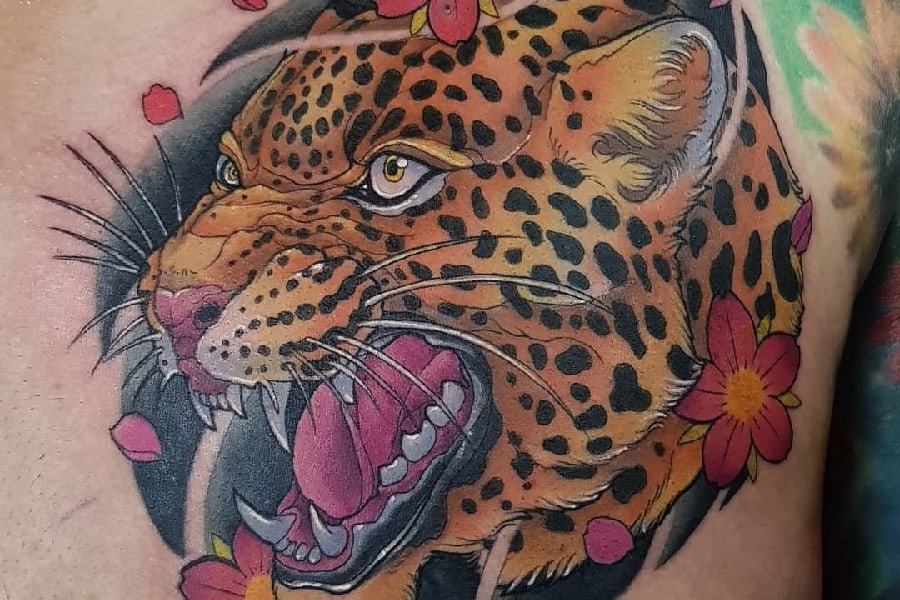 The mysterious jaguar is a powerful symbol of bravery and strength.

Much like its brethren in other parts of the world – lion, tiger, panther and snow leopard – the Jaguar is a big cat that fascinates and intrigues with its mix of force, speed, cunning and camouflage.

Given the symbolism associated with the jaguar it is no surprise that so many people choose to get this cat in a tattoo design. Found in Central America, the jaguar is the perfect subject for a variety of tattoo styles: from tribal tattoo art inspired by the complex Mayan and Aztec cultures, to American traditional depictions and wild animal realism, there are many way to create a compelling jaguar tattoo design.

These pieces provide just a glimpse of what is possible when top artists apply their skill and knowledge to jaguar tattoos.

The Modern tattoo artist continues to push the boundaries of what is possible when it comes to permanently applying a tattoo idea on the skin of their clients. One of the most dramatic styles showcasing an artist’s skill and dedication are pieces employing a photorealistic approach.

This realistic style is not limited to the human face. As these pieces demonstrate, top artists can apply this stunning realism to jaguars to create tattoos that come straight out of the pages of National Geographic.

Whether in full color or black and gray; placed on the shoulder of a woman or stretched across a man’s entire chest, a realistic jaguar motif is some of the most exciting designs you will come across.

The Jaguar and Eagle played an important role in Latin American culture thanks to their fierce nature—an attribute highly valued by the Aztec and Maya civilizations. It’s no surprise then that many people choose jaguar tattoos incorporating motifs that draw on warrior and animal totem inspiration from this ancient and fascinating jungle culture.

Some people choose to integrate the cat into a tribal tattoo design recreating Aztec art, while others choose an Aztec idea for the opportunities they provide to bring other elements into a tattoo: the eagle, warrior and jungle scenes are all important elements in Aztec symbolism that can help create more exciting and unique jaguar tattoos. These pieces are great examples of how well the jaguar animal totem can be used when inspired by Aztec traditions.

At their core, tattoos are tools for self-expression and the ink someone wears should represent their sense of style and taste. For some people this means bright colors, for others the beauty of ink means black and gray work is better suited to their personality.

There is a classic sensibility to black and gray work, plus those that choose this approach don’t have to worry about colors fading over time, as black and gray tattoos tend to age better than color work. This monochromatic approach to tattoo design is especially well suited to jaguar tattoos thanks to their unmistakable spots: even without color, anyone who sees one of these pieces will now instantly what kind of big cat is being depicted.

These tattoos demonstrate the variety of styles that can be successfully applied without the use of vibrant color.

Without a doubt, the most important element that contributes to a successful tattoo is linework: without precise and consistent line work tattoos run the risk of turning into formless blobs over time.

A growing trend in the world of tattoo design sees more people eschewing the intricate shading that is often associated with black and gray work, taking a more subtle approach that uses simplified designs and black line work to create interesting tattoos. When applied to the jaguar motif, this approach can be surprisingly successful. This can be attributed to a talented tattoo artist , but also to the fierce subject matter of big cat and prey.

The Jaguar’s distinctive spots mean the essential characteristics can be perfectly captured with this subdued approach.  This also works for other big cats such as the leopard, cheetah, snow leopard, panther, or tiger tattoo.

For some people there simply is no other way to fully capture their personality and exuberance than with bright colors. While we have seen that jaguars can be successfully applied in a number of different styles and approaches, these big cats can make for some incredible full color tattoos.

Their unique pattern, with the stark black spots over a tawny yellow background, provides artists with ample opportunity to show off their skill when applying a gradation of color tones. Some may prefer the bold stripes of tiger tattoos, or the pitch-dark tones of a black panther, but many people feel the jaguar’s coat is the most interesting.

These pieces are great examples of the different styles and approaches that can be applied to jaguar tattoos that utilize colors to perfectly capture the essence of this beautiful big cat.

With the strongest bite force of any of the large cats—stronger than the lion, tiger and cheetah—it makes sense that many people choose to get portraits of a jaguar’s head to symbolize strength and bravery. Many people think of photorealistic black and gray work when they hear “portrait”, although these exciting pieces demonstrate that it is just one of many approaches to jaguar portraits.

Some of these pieces take an illustrative approach with a looser feel, while others use a stylized frame to improve the overall composition of a piece and put the jaguars fierce visage at center stage, however with such a compelling animal as subject matter it is difficult to go wrong.

Born from the bold lines and vibrant colors of American traditional tattooing, neo-traditional tattoo design retains many of these traits while freeing the artist to use a wider color palette on a broader selection of motifs and subject matter.

Neo-traditional work allows artists to tackle a limitless selection of subjects and ideas – such as skull, tribal, or floral imagery – making it a great choice for a jaguar tattoo since many people incorporate a variety of elements into one tattoo design.

The tried and true warrior, skull, prey, and fierce woman ideas are all fair game when it comes to neo-traditional work. These pieces demonstrate just how successful this approach can be when top artists have jaguars as subjects for their work.

More than any single style or approach, new wave often refers to a freedom to create bespoke designs that hold special meaning to the wearer. Whether this means tribal Aztec temples and UFOs or a realistic jaguar smoking a pipe in a knit cap, new wave work gives the artist the reigns to create a one of a kind tattoo for the wearer.

These unique tattoos are just a glimpse of what is possible when this unchained approach is applied to jaguar tattoo designs.

While it is true that tattoos are expressions of taste and personality, they are also works of art and everyone prefers a well-executed tattoo over a shoddy one. The level of technical skill that is displayed by modern tattoo artists is a far cry from the rudimentary work that typified tattoos from earlier generations.

From hyper-realistic portrait work, to the complex geometric mandalas that continue to grow in popularity, these jaguar tattoos are a great cross section of what is possible when talented artists flex their technical muscles to achieve beauty in each animal.

This is where the Western tattoo tradition started, and despite the fact that many modern artists regularly showcase work that would blow the minds of their forebears, American traditional work still retains an appeal after all these years. Interestingly, jaguars and black panthers were common elements in some of the earliest of these American tattoos; in fact, Sailor Jerry himself regularly used jaguars and other big cats in his flash sheets and tattoos.

There are few things that can evoke feelings of power and bravery like a snarling jaguar wrapping up someone’s forearm, and it is for this very quality that American traditional jaguars remain such a popular choice for tattoo enthusiasts around the world.

What do jaguar tattoos represent?

Jaguar tattoos have been popular for decades; some of the most striking and earliest American traditional designs featured big cats, notably jaguars and panthers. The main reason that these animals remain so popular is the way they perfectly convey a sense of bravery and power. Along with these traits, jaguars are also closely associated with ferocity and killer instinct, given the that they have the strongest bite force of any of the large cats, this is a well-earned reputation.

What did jaguars represent to the Mayans and Aztecs?

Among the ancient indigenous cultures of Central America, where jaguars roam, these big cats played special roles in the traditions of the Aztec and Mayan peoples.

The Aztec people associated jaguars with ferocity, power and fertility; the Aztec term ocelotl had roots in their word for jaguar and was used to describe those people that belonged to the warrior elite of this war-like culture. To be a Jaguar Warrior was a point of pride.

The other famous Central American culture, the Mayans, had an even deeper symbolic relationship with these jungle cats. The Mayans had a number of gods that were depicted with jaguar features, although the most powerful jaguar totem was that of the God of the Underworld. One of the oldest of the Mayan gods, the Jaguar God of the Underworld played an important role in the overall world view of the Mayan people and contributed heavily in their myths and legends.

Did you enjoy this collection of Jaguar Tattoos. Click on the links below for more coll galleries featuring killer cat and Central America symbolism: