Defenders of the Second Amendment are all united behind a tactical skin art campaign! Proud gun owners everywhere are courageously joining the ranks of their peers by flashing the firepower of a “molon labe” tattoo.

“Molon labe” roughly translates to “come and take them,” and this one Greek phrase has been feverishly revived by avid constitutional supporters, especially in regards to the right to bear arms.

These proud gun owners are showing their political passion with matching tattoos of the foreboding statement. Anyone who wants to flash a defiant personality can ink this streamlined quotation from King Leonidas I, who uttered the infamous lines during Battle of Thermopylae.

This simple statement is loaded with personal resolve in the face of undue adversity. The three words indicate individuals who will not be defeated without a tremendous resistance. It’s basically the same as saying, “I’d like to see them try it!”

To make a stand and start a one-man resistance, simply take a gander at the “molon labe” options we’ve generously compiled for your viewing experience. As you will see, a lot of the diversity comes through variations in typography.

Naturally, the most committed activists are combining the phrase with ink of their favorite weapon and Roman warrior helmet combo! 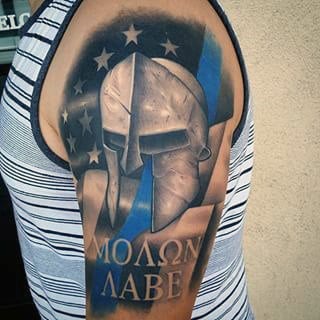 A patriotic themed tattoo on a very brave arm. Taking the spotlight is the metallic and sinister Spartan helmet which is a symbol for strength, loyalty, courage and power. At the background is the stars and stripes of the American Flag with highlighting a blue singular stripe as a reminder that it is a time of peace. This design is a great choice to include in your short list of Molon Labe tattoo inspirations, primarily because of the high definition Spartan Helmet is over the top impressive. 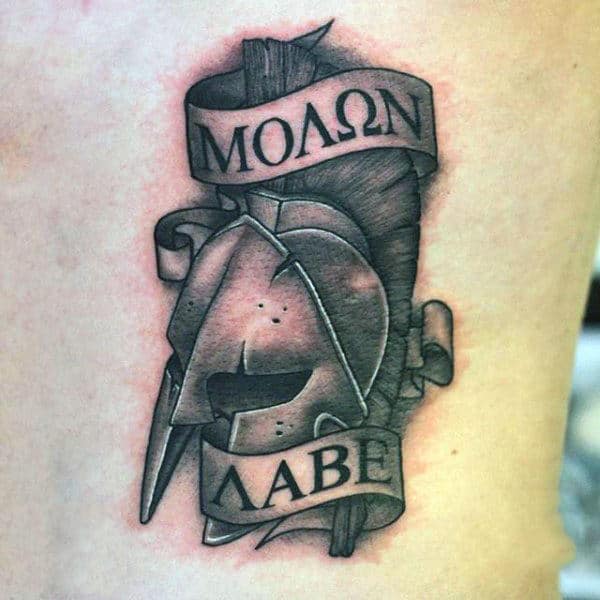 This is a rustic and traditional illustration of the Spartan helmet. This ink work is in gray and black, a highly contoured illustration with, “Molon Labe” inscription. The details of the horsehair crest are admirably fine. The artist added character into the metal helmet by providing more details such as the three holes per section of the helmet plus its crack along the forehead area suggesting that it also survived a few battles. 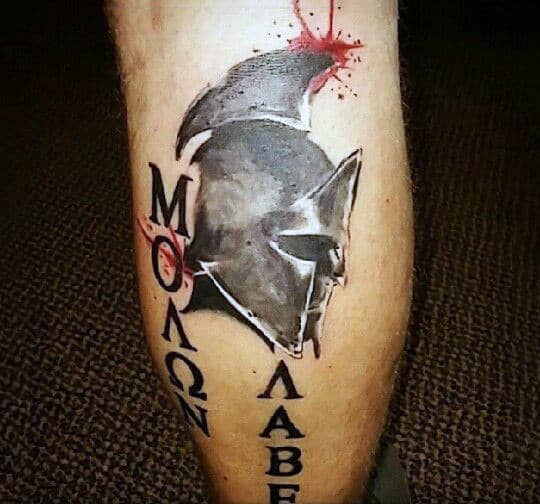 This is a captivating tattoo of the Spartan Helmet with its corresponding inscription of “Molon Labe”. The splash of color, blood red in particular, is a tribute to the fallen soldiers/warriors who fought and died for Sparta and its people. This tattoo is done on the calf of the customer, worn like a leg armor invoking the same courageous and brave spirit of this fierce warrior. 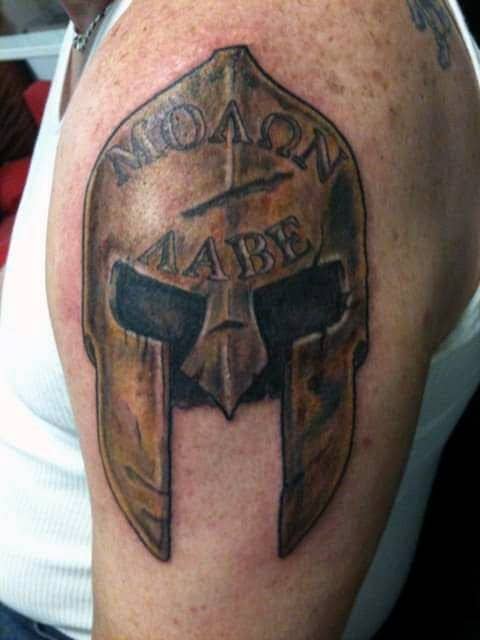 The Spartan head gear also called the Corinthian Helmet, in which the name is taken from city of Corinth. This specific design was favored by everyone in Greek army as a helmet. The Spartan soldier profile is not complete without the bronze helmet. This realistic tattoo deserves the shoulder spot like a badge of honor. 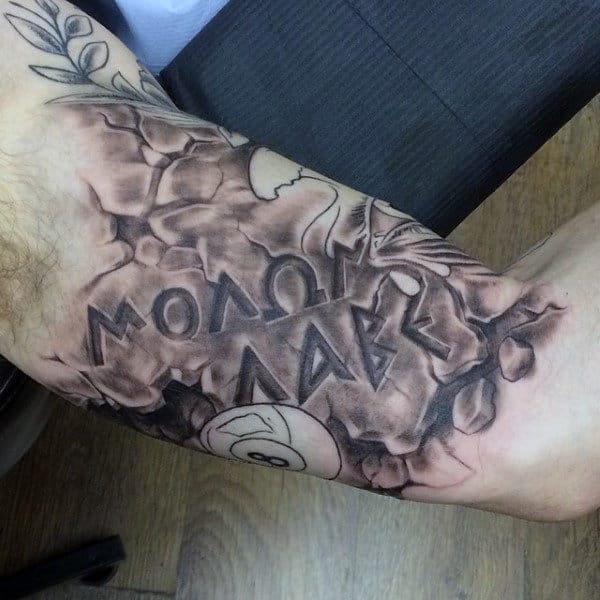 The two words of “Molon Labe” tattooed on the inner arm of this well-toned gentleman, against an illusion of a crumbling cemented wall. It is in black and gray with so many details, as well and in high definition. 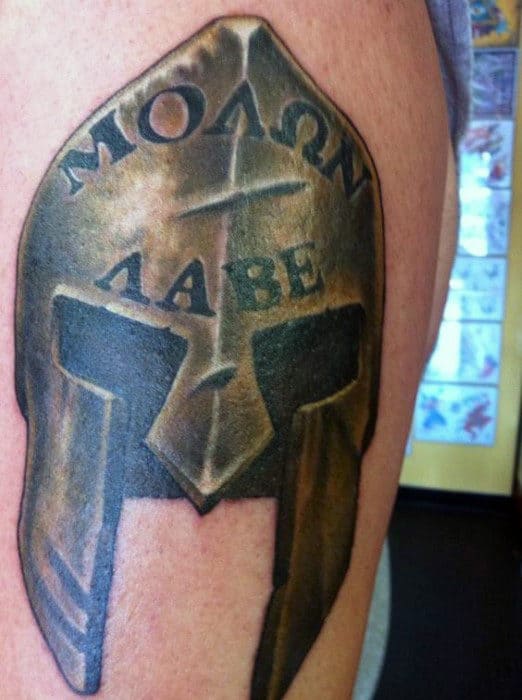 A soldier’s pride and glory, next to the sword or any weapon of choice. This is an incredible rendition in black and bronze ink. It is highly detailed even some of the dents were added so she’ll receive. 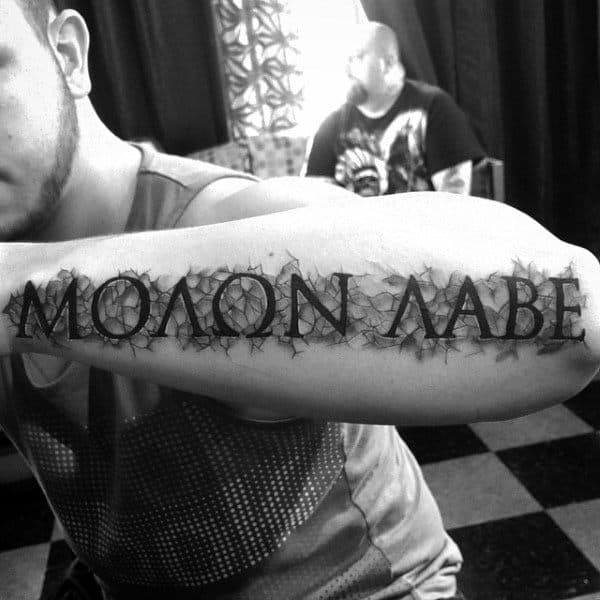 The outer arm of showcasing King Leonidas two powerful words that inspire an army. The tattoo is in black and gray with realistic rubbles as background for the black letters. It is indeed symbolic to carry this phrase on the arm when it symbolizes defiance for the modern day patriot who supports the right to bear arms. 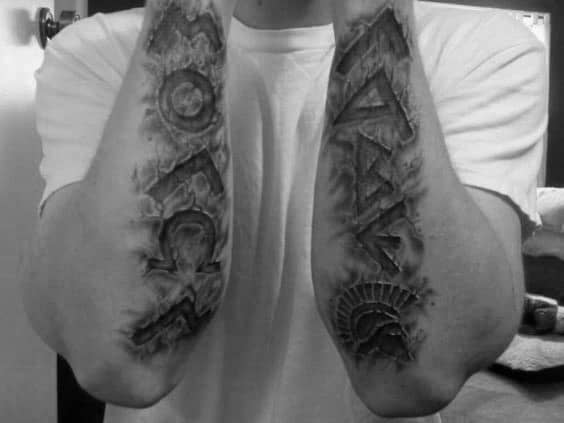 This skin modification is literally lit! The words and helmet are flaming and reversed the contouring of the letters, the result is a visual feast. 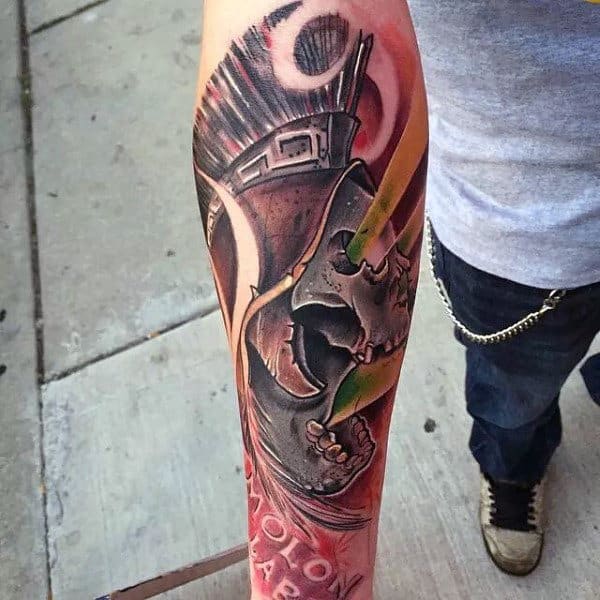 This skull piece of a Spartan warrior with glowing light effects shooting from the inside of the skull. This brave and fearless warrior, immortalized and well-preserved its fierce and loyal spirit captured on this powerful tattoo. 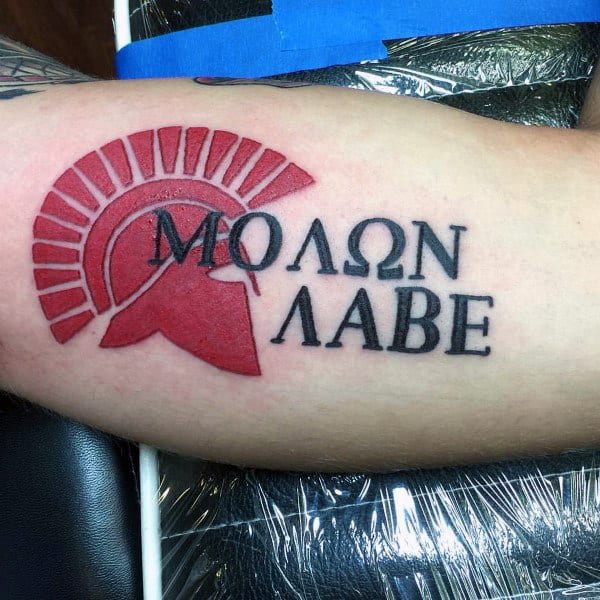 This is another concept of this Spartan battle cry tattooed on the bicep of the canvas, showcasing its muscle tone and slope. The helmet illustration is in deep dark red, in contrast against the black letters of “Molon Labe”. 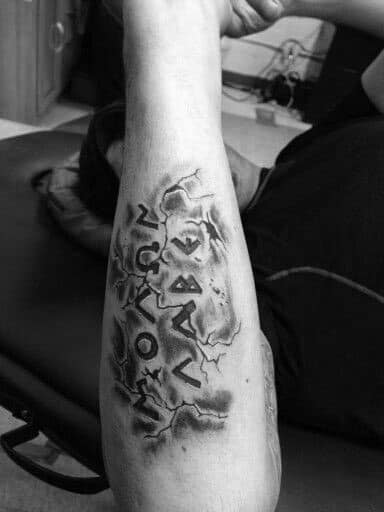 The background of the dark Molon Labe letters gives it a battle scene theme wherein the Greeks were slaughtered by the Persians. The cracks on the stone is impressive and helps achieve the destruction theme. 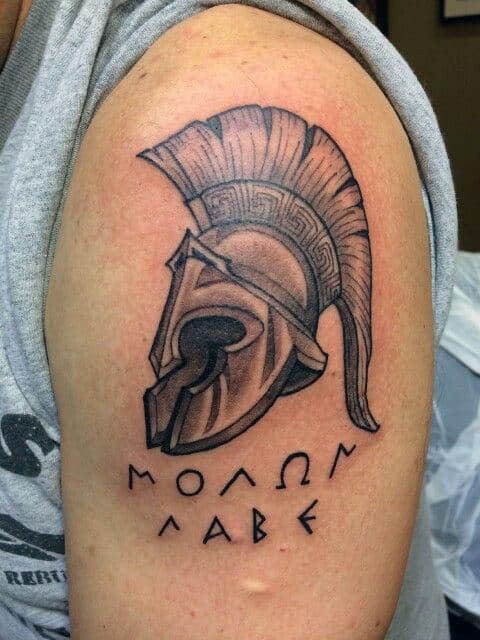 This is modern and minimalist design of the Spartan warrior with the elaborate horsehair crest on top of the metal. The helmet is illustrated in black and gray outlined with extra fine lines and shaded delicately. 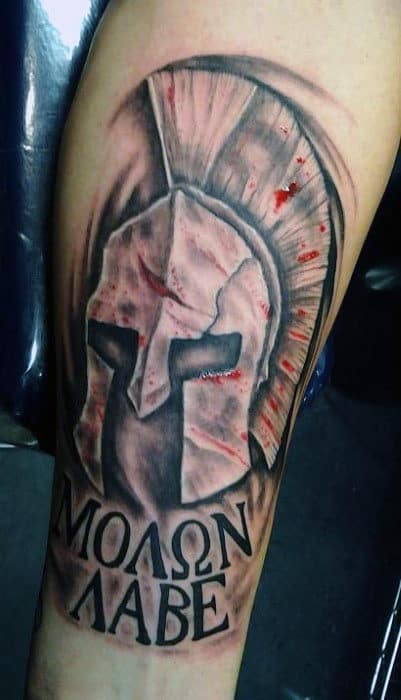 The brave patriotic arm bearing the modern day battle cry of defiance against tyranny. The added blood splatters on the helmet makes this tattoo brutally cold. The helmet, Spartan in every detail, looks worn and been into countless of battles. Win or lose, the Spartan warrior will honor his vows same as the modern day patriot, he will uphold and defend the constitution, especially the people it serves. 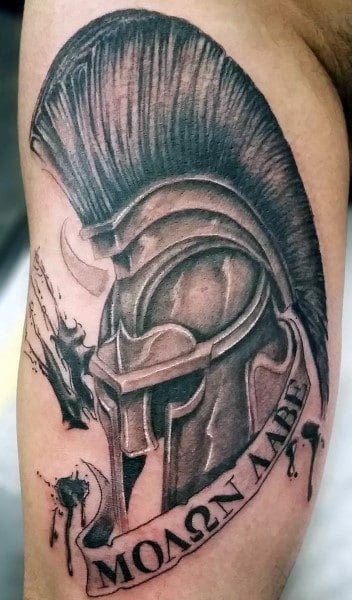 The inner forearm adorned with this stunning tattoo of the Spartan helmet bearing the famous retort of King Leonidas to King Xerxes. The soldiers with helmets adorned with transverse horsehair crest are called hoplites and were regarded as officers. 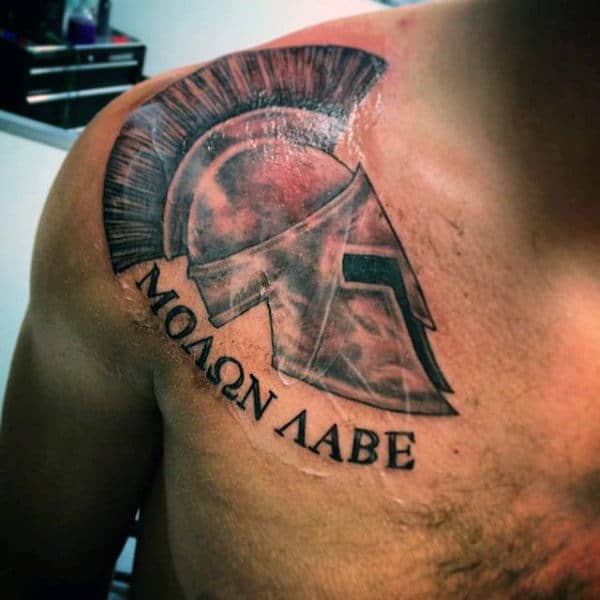 This is a simple design of the Spartan helmet and its battle cry. The black and gray details, the contouring and strategic negative space to deepen the dark shading. The letters are inked finely, precise and placed to complement the curve of the edge of helmet. 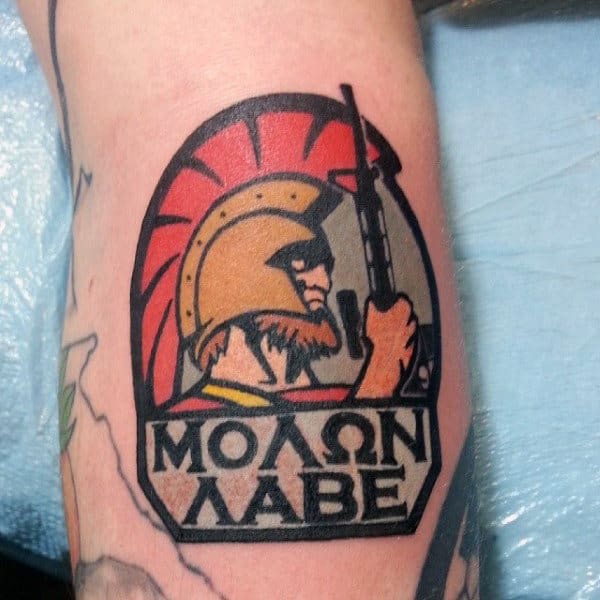 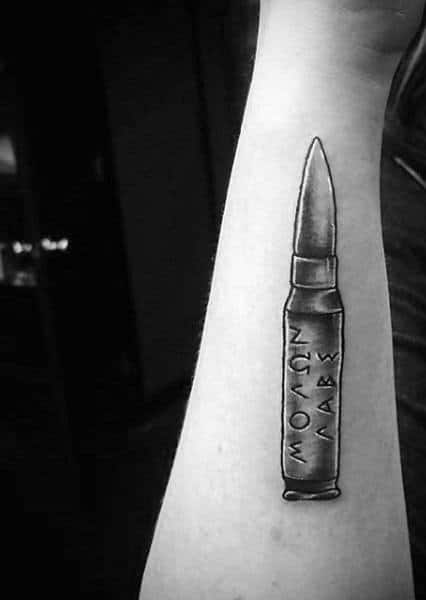 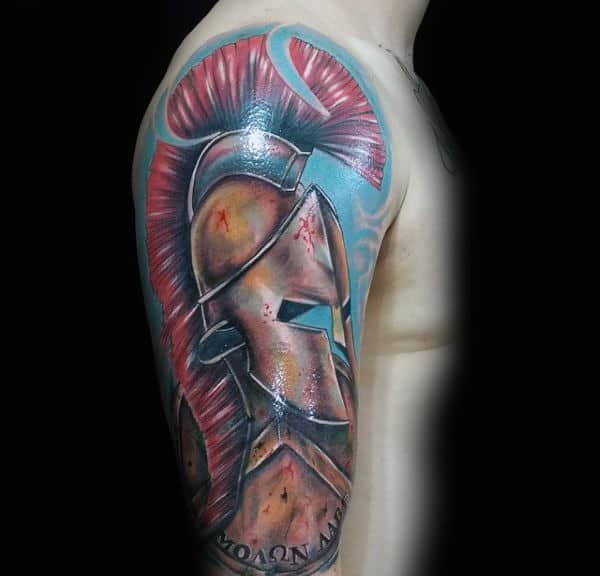 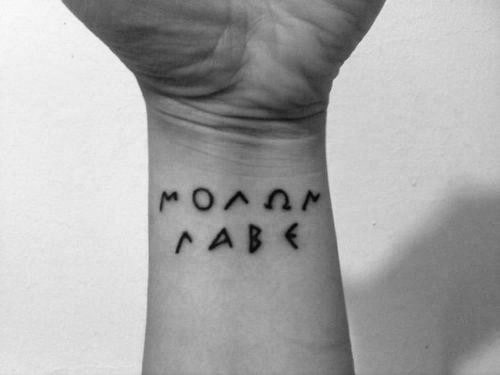 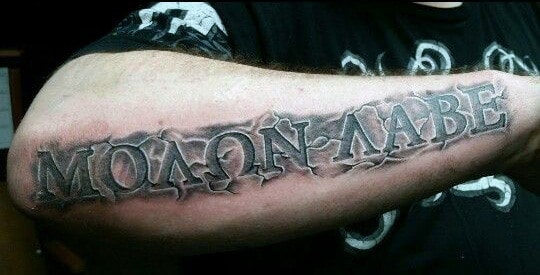 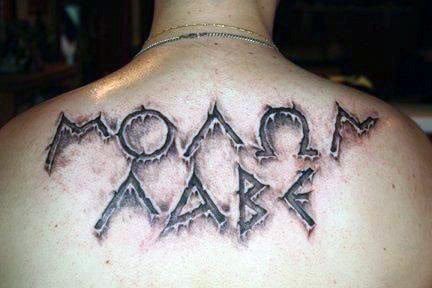 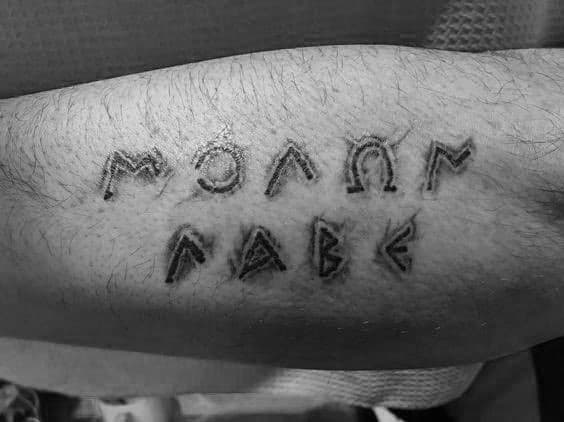 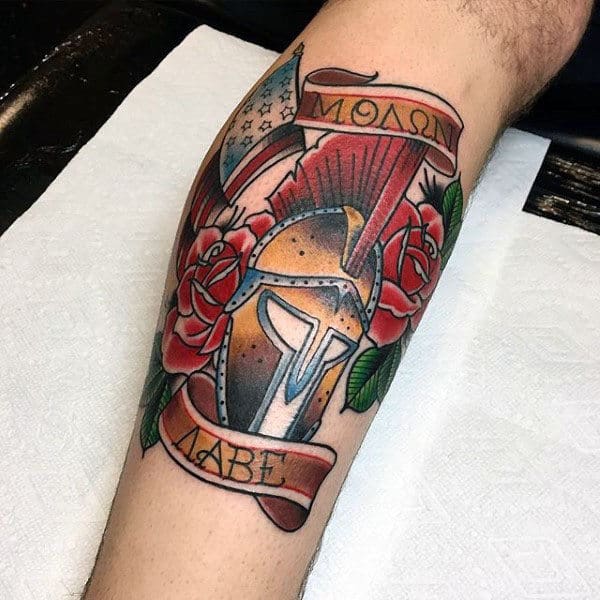 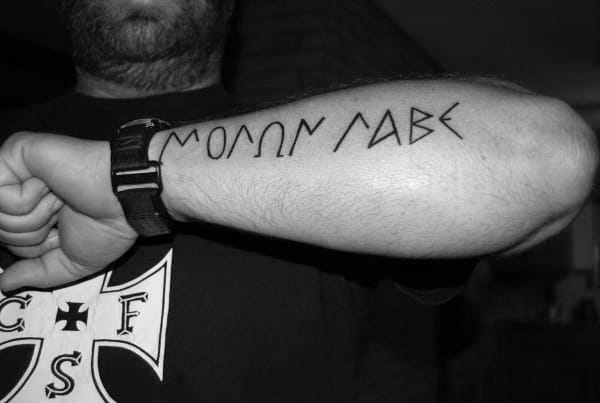 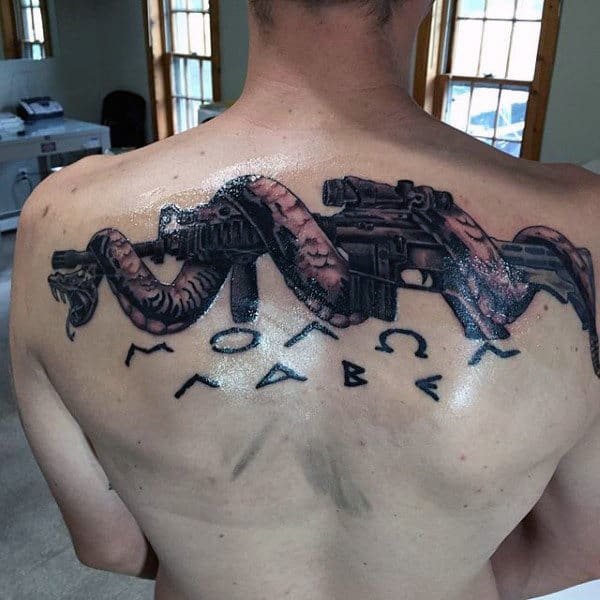 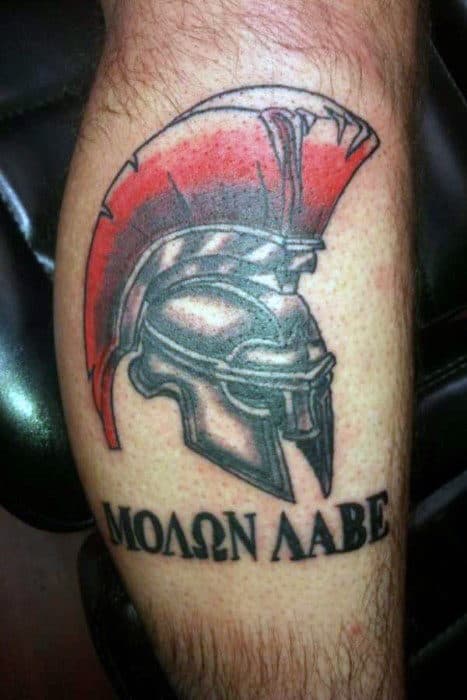 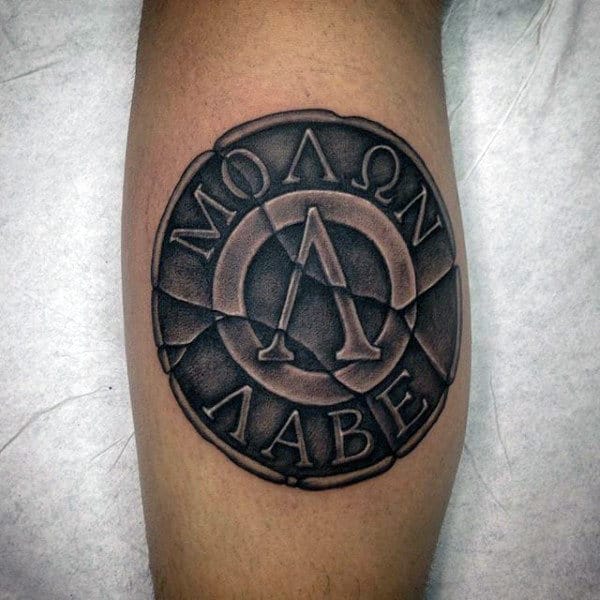 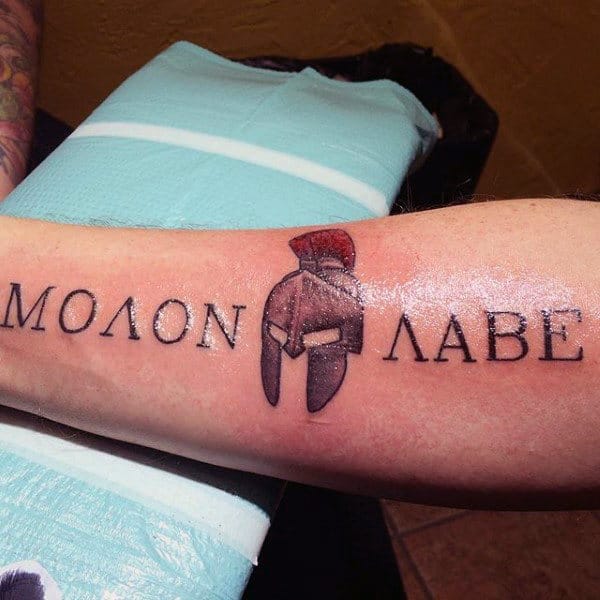 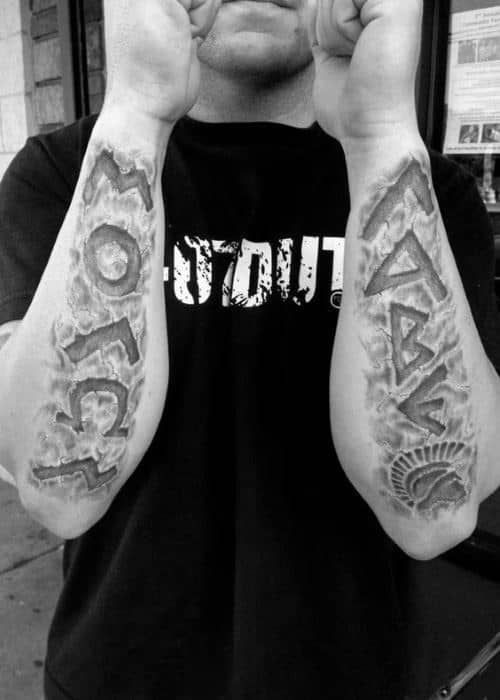 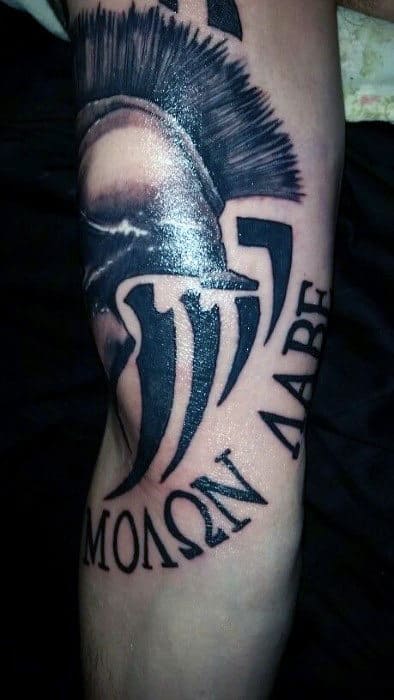 What does molon labe mean?

Molon Labe is an ancient Greek phrase which means “come and take (them)”.  This is a term widely use among the firearms community and, supporters of the 2nd Amendment and the right bear arms.  It is in the emblem of the first Greek Army Corps, and in the United States, it’s the model for the Special Operation Command Center.

These are the powerful and timeless words spoken by King Leonidas of Sparta to King Xerxes of Persia right before the battle of Thermopylae in 480 BC. When King Xerxes ordered the small army of Spartan to lay down their weapons. The Spartan King responded, “Molon Labe!”

The Spartans lost in this battle, all 300 Thespians and Thebans who stayed behind to fight along with King Leonidas died. King Leonidas was found dead and his corpse beheaded by the Persians.

The Greeks were massacred in this battle, but morally and tactically, a victory for Sparta and its citizens. It provided ample time for the people to evacuate to the island of Salamis. Later, the Greeks would further defeat the Persian in the battle of Battle of Salamis and crushed them a year later during the Battle of Plataea.

King Leonidas famous words was documented by a priest and biographer, Plutarch, in his book 70 Essays.

And so, how are these bold words still relevant today? A tyrannical government of today is the same threat to freedom and liberty as it was back then. This is the battle cry of the firearms and community and supporters of the 2nd Amendment of the constitution, the right to bear arms.

“Molon Labe” are the same words that gun owners are bannering when gun control is brought on the table. This is a controversial and deadly issue but they also won’t bend and falter to the tyrants trying to take their firearms and their right to defend themselves.