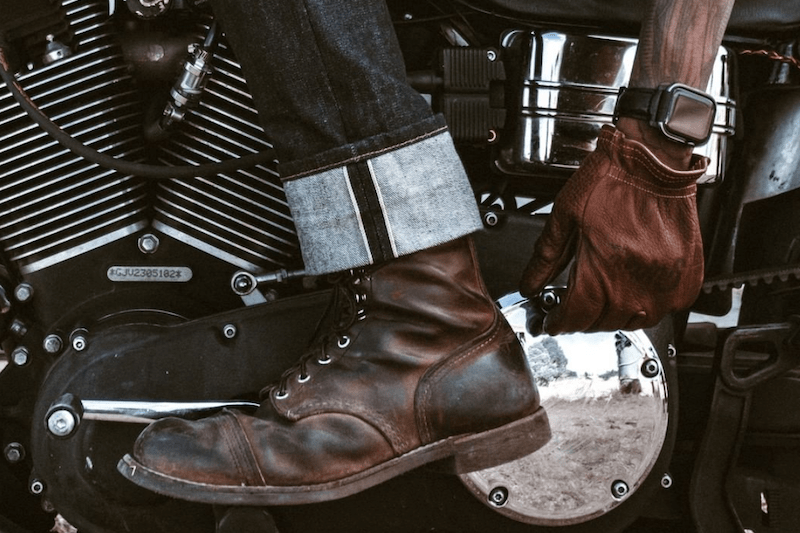 Having a solid pair of heavy-duty boots is not a necessity reserved for only a select few men. In fact, every man should invest in a quality pair of work boots by the time he is 30, regardless of if the reason for purchasing them is purely out of fashion or function. While browsing through options, you will probably arrive at the undeniable conclusion that Red Wing has your best options.

Between the Heritage Iron Ranger and the Heritage Blacksmith, Red Wing is a brand that knows how to craft boots in the classic yet innovative way that they should be crafted. From their pristine leather insole to their Goodyear Welt construction, these boots take footwear to a whole new level. Though both boots boast an equal level of quality, there are a few key differences between each option that you’ll want to be aware of before purchasing one or the other. That being said, here is our guide to everything you need to know about the Red Wing Heritage Iron Ranger and the Red Wing Heritage Blacksmith.

Though they look quite similar (actually, nearly identical) there are few stand-out characteristics on each boot. For the Red Wing Heritage Blacksmith, it is its lack of a cap-toe. In addition to having some extra wiggle-room and space around the toes, this missing toe-cap also allows for the Blacksmith’s to be a bit sleeker in style. Another way to recognize a Blacksmith is by the brass hardware, which tends to complement a variety of leather colors more than the nickel which is found on the Iron Ranger. The Red Wing Heritage Blacksmith’s come in a handful of different leather types, none of which are as iconic as the Iron Ranger’s options. However, the most popular leathers for the Blacksmith boots are briar slick, black prairie, and roughout. 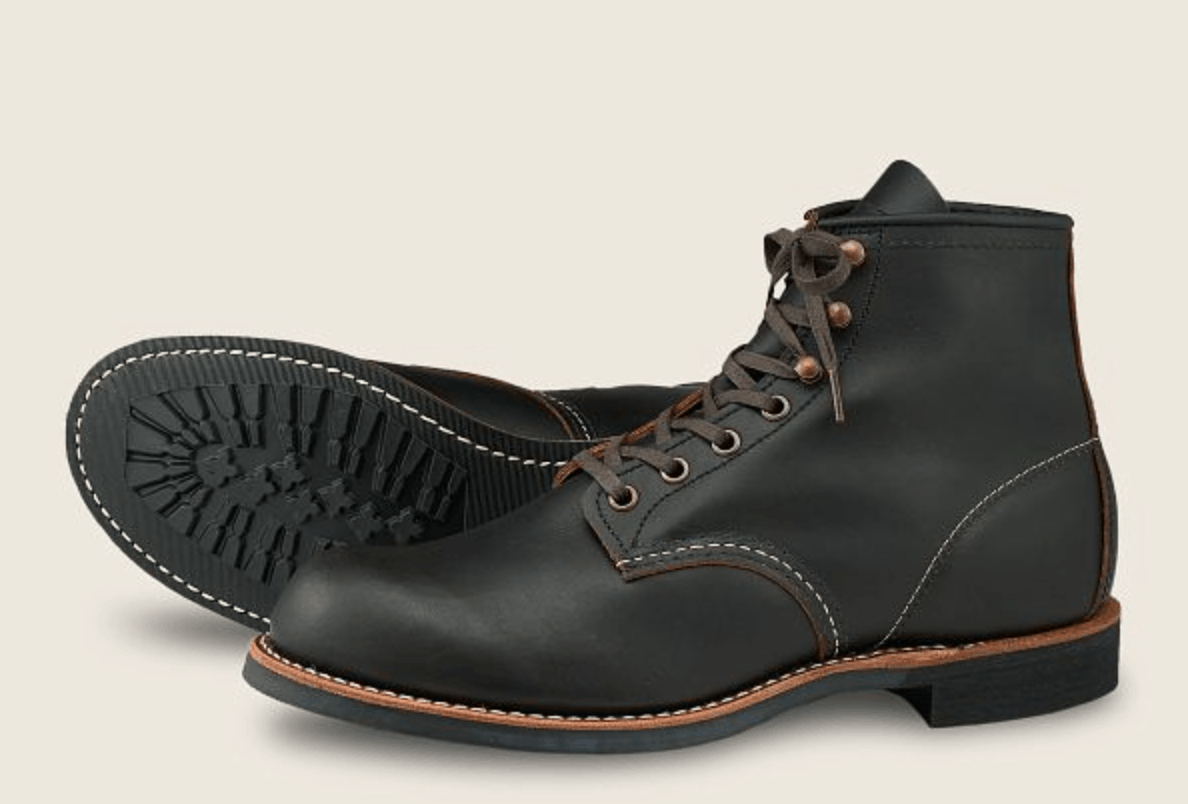 The Blacksmith is a boot beloved for its highly wearable, everyday versatility. A sleek, smooth toe leads the way, and solid brass eyelets and Flat Waxed laces are every bit as durable as they are dignified.

With a distinctive cap-toe and nickel-plated eyelets, a pair of Red Wing Heritage Iron Rangers can be spotted from a mile away! This timeless classic manages to nail a perfect mixture of ruggedness and elegance, giving it a range of style for those who wear it. Keep in mind that it is definitely a thicker boot, however, the slim sole and full-grain leather upper allow for the boot to retain its classic appeal. The Iron Rangers are also made from Amber Harness and Roughout leather, which can be a bit of a hassle to break in. However, after a few months, the leather patinas quite nicely, giving you a nice surface. 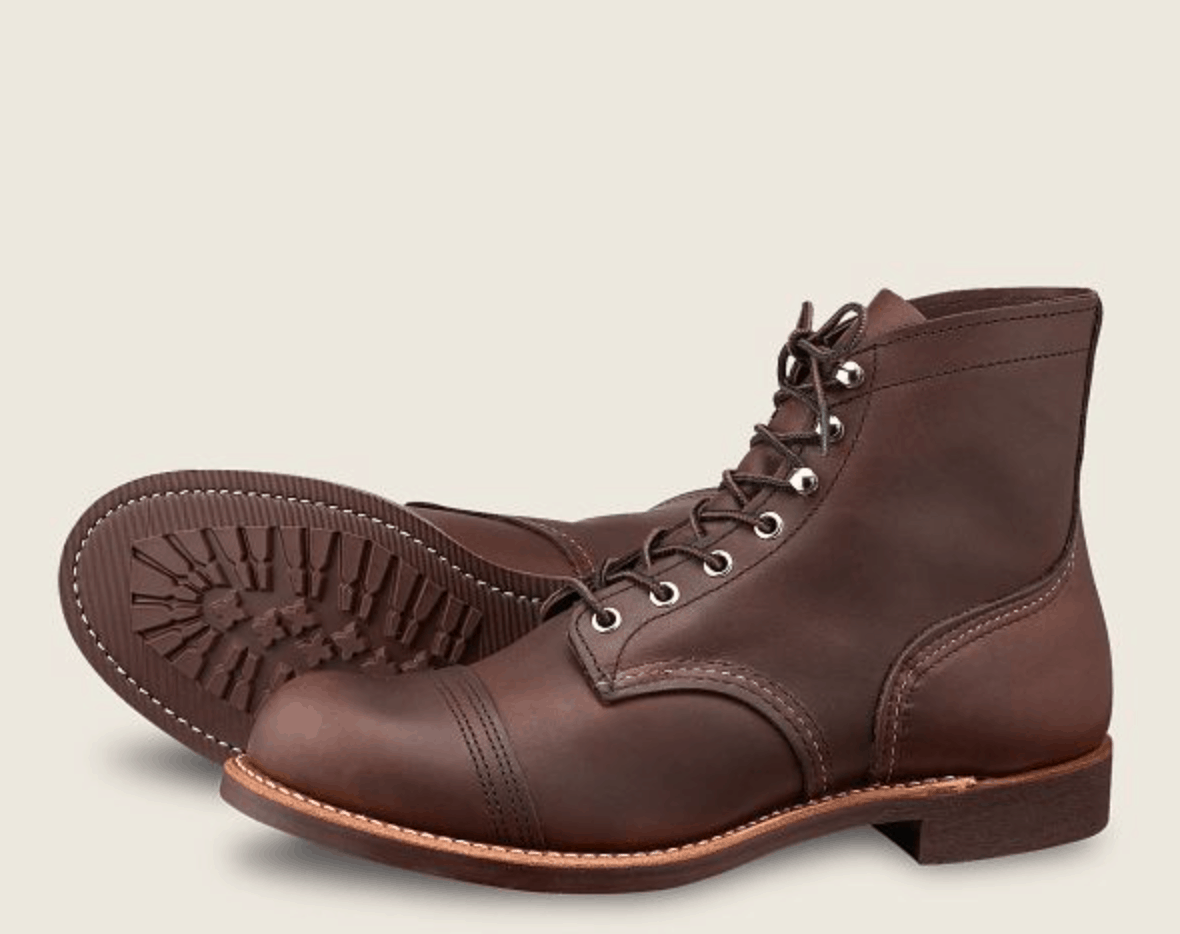 Pros and Cons of Each 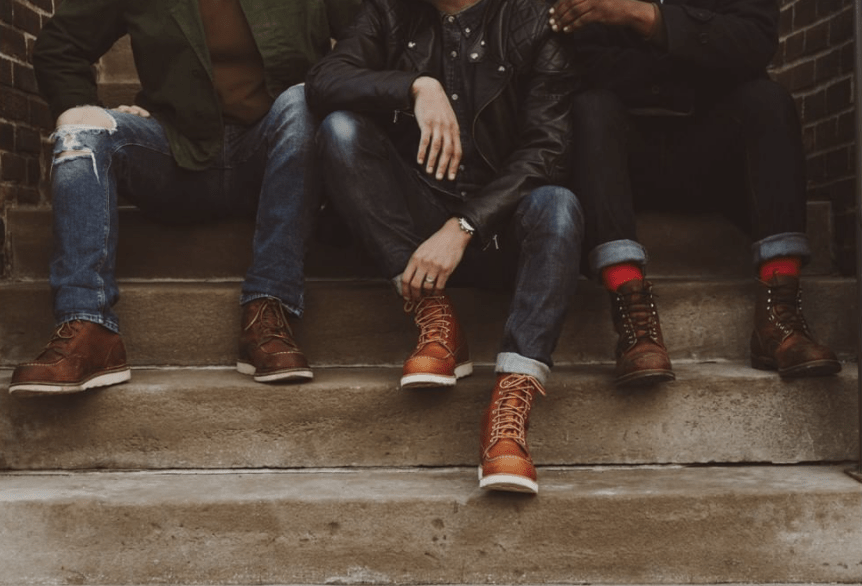 While you may be able to decide between the Red Wing Heritage Blacksmith boots and Red Wing Heritage Iron Ranger boots based purely on looks, there are a few other key points to be aware of before making a firm decision.

In regards to the Red Wing Heritage Blacksmiths, the first pro comes from the round or plain-toe. This aspect of the boot not only looks more modern and polished but also allows for more flexibility and comfort while sporting them. Another plus of the Blacksmiths is the brass hardware which tends to match the leather options with much more ease. Lastly, though some prefer the more iconic and classic leathers such as Amber Harness, the funky and new leather options on the Blacksmith are both unique and versatile, giving you some more room for styling. On the other hand, the biggest downfall of the Blacksmith boots is the fact that they are not available in some of the leathers that the Red Wing Heritage brand is most known for.

For the Iron Rangers, men are able to maintain the iconic Red Wing style with nickel eyelets and a round toe box. Also, the in-house tanned leather with 270-degree Goodyear welt makes a huge difference in the look and feel of the boot. Lastly, while the toe-caps do take away some extra wiggle room at the front of the foot, they also give a more masculine look (and prime durability). When it comes to the cons of the Iron Ranger boots, most are based purely on look preferences, with the only true con being that you will most likely need shoe trees in order to keep the vamp from sinking and to prevent the toe-caps from looking too bulgy.

Which Should You Buy? 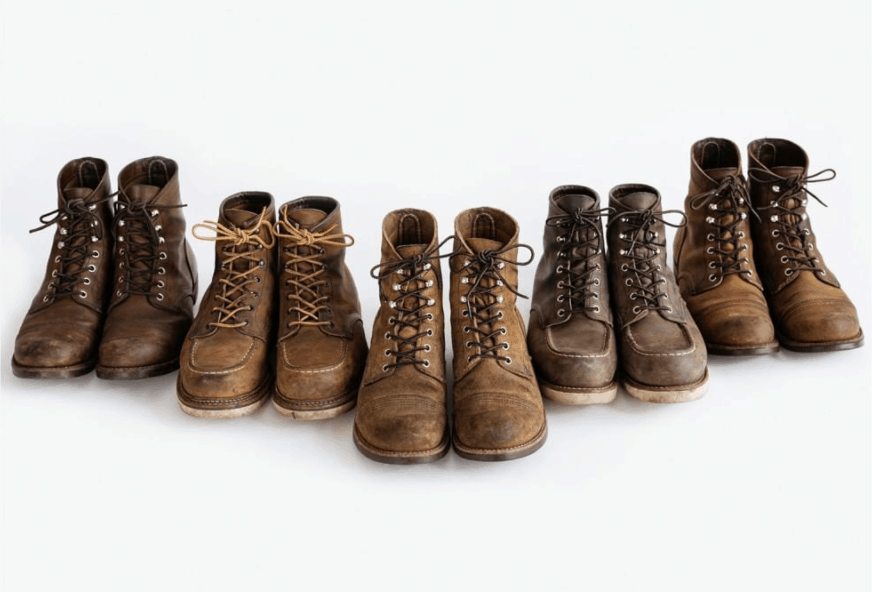 The best part about both of these Red Wing boots is the fact that you truly cannot go wrong when picking one. Though the differences definitely make an impact, they are slight enough to avoid any major regret in choosing either-or. When truly weighing both options, it appears that the Blacksmith boots and the Iron Ranger boots remain equal across the board, meaning that your decision will need to come down purely to personal preference. However, if you’re seeking something more iconic and statement-making, go with Iron Ranger. In turn, if you prefer something more understated and sleek, give the Blacksmith’s a go.

The only real mistake when deciding which boots to purchase would be passing up both altogether. Between the style, quality, and functionality, both the Red Wing Heritage Blacksmith boots and the Red Wing Heritage Iron Ranger boots are at the top of their game, making them some of the best heavy-duty boots on the market. Of course, you certainly can’t go wrong with buying both!

See more about - Wolverine 1000 Mile vs. Red Wing Heritage: Everything You Need To Know