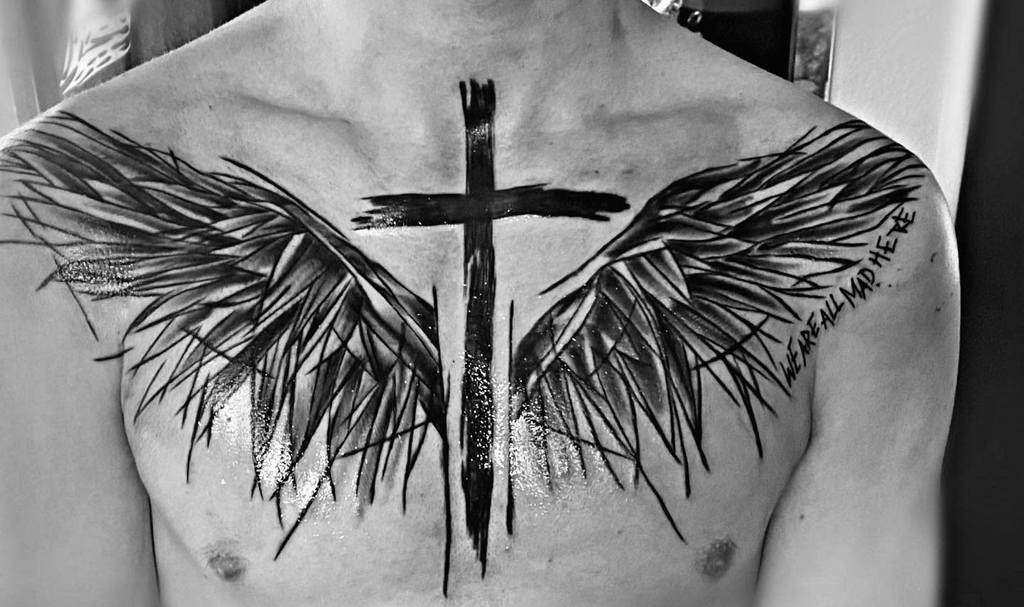 Angel wing tattoos are a popular design choice for those wishing to memorialize and remember the loss of a loved one.

They can also be used in tattoo design as symbols representing everything from pain and suffering to protection, guidance, and positivity.

Christian religious themes feature in classical angel wing tattoos, however, beautiful angel or wing tattoo designs shouldn’t be reserved for the religious. They are often associated with bird wing body art, freedom, and the desire to fly. 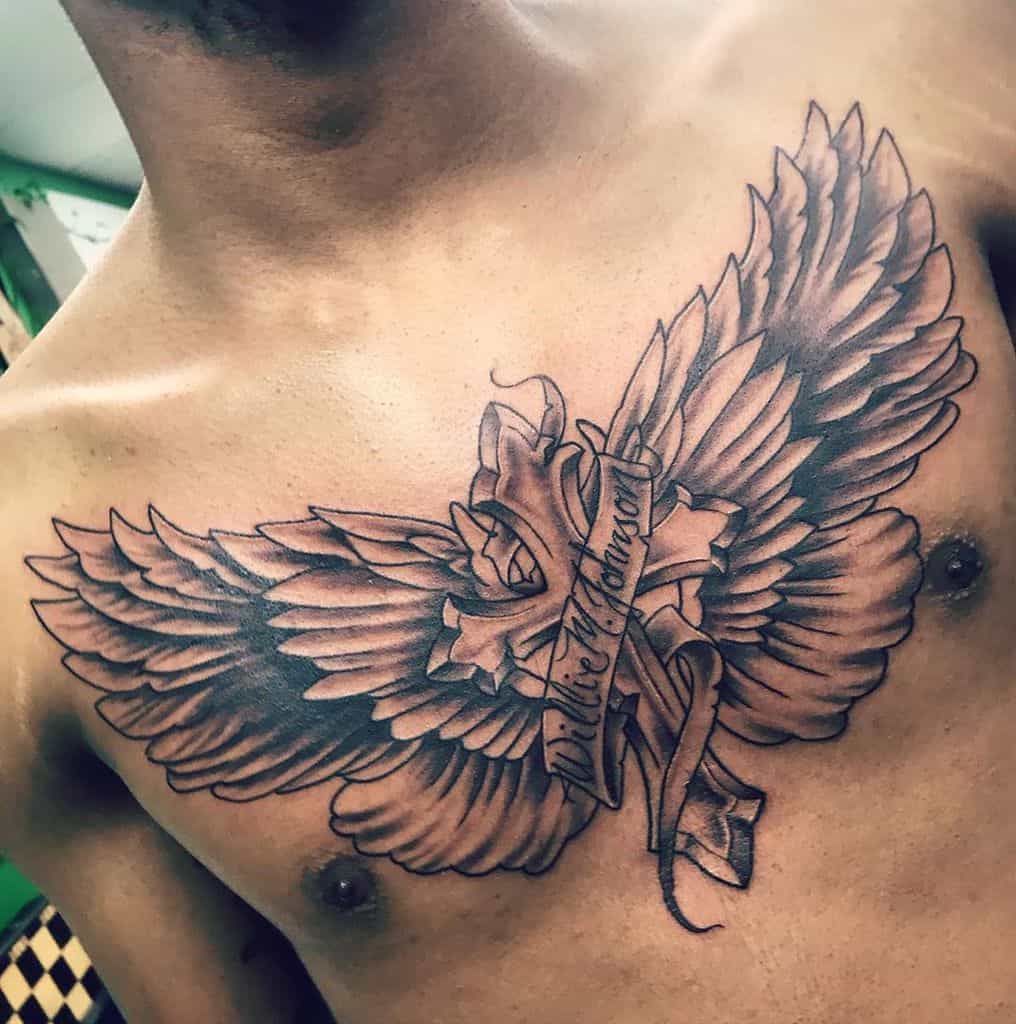 For many modern collectors, angel wing tattoo designs are etched to signify and remember the loss of a person close to them (and can also refer to beloved pets).

They are often depicted in conjunction with their name, date of birth, or quotes (both biblical and more esoteric) that remind the subject of how that individual was important to them.

The deeper meaning of the tattoo style is both a reminder of their relationship, but also an indicator that the lost loved one is now a powerful protective guardian in the wearer’s life.

Others opt to create a small angel wing with halos or use other religious imagery – a guardian angel, a broken wing, tombstone, saints – in the design, or even mesh activities that the deceased used love into the memorial ink to give it a different meaning. 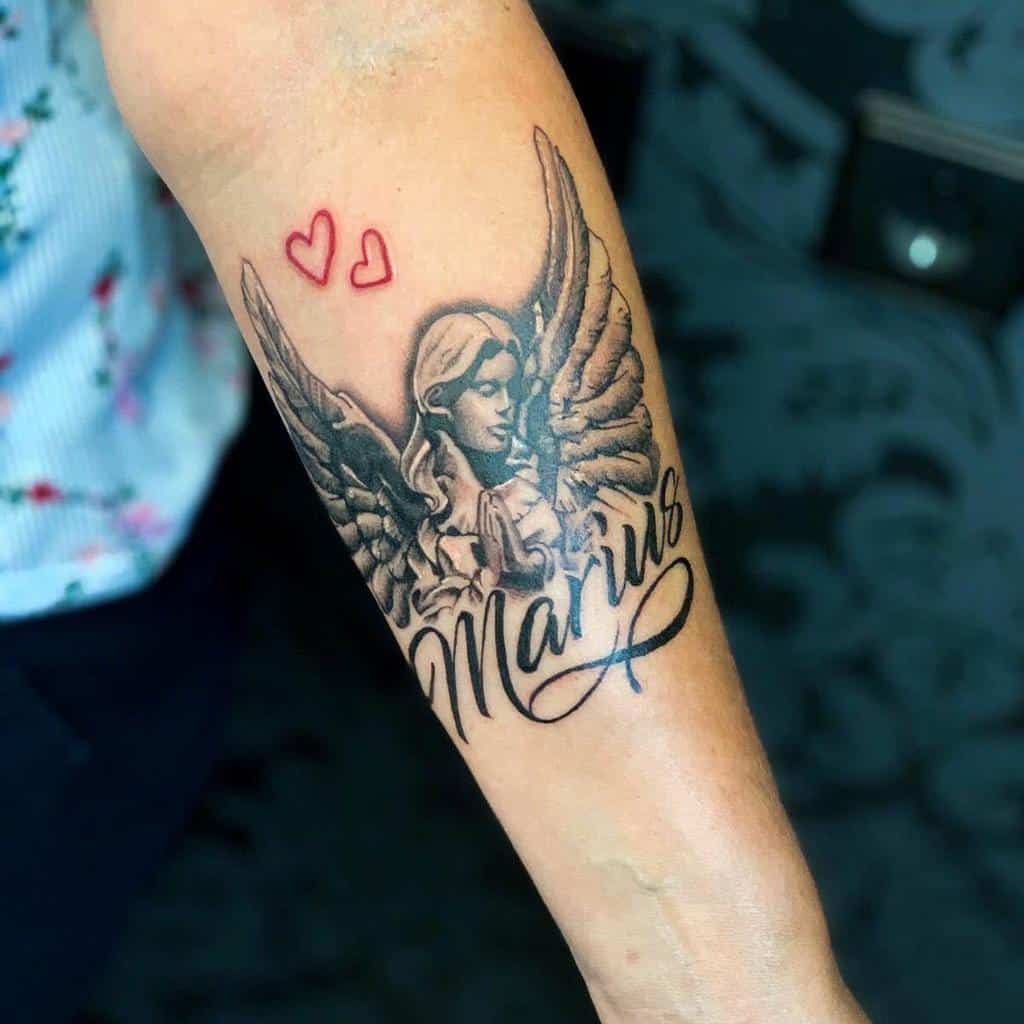 Winged angels are guardians that are literally messengers from God, their wings allowing them to travel to and from heaven to do the work of God. These winged creatures are essential to many tributes as huge wings or singular praying angel pieces.

As servants of God, they protect the realm between the heavens and earth as watchful guardians. They provide protection and guide us against evil and our destructive desires. 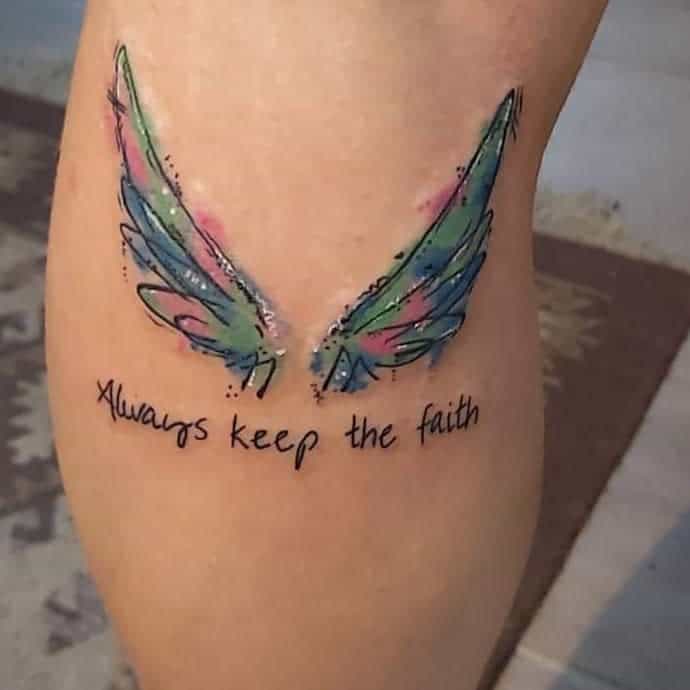 Angelic wing tattoo designs are often pursued in remembrance of a lost relative or friend, while different designs can be guardian angel or wing tattoo ink one gets after surviving a near-death experience.

This may also be the true meaning of a wing tattoo for people who feel like they are lucky to have a second chance at life. Angel wing tats are a recurring trend among recovering addicts, released prisoners, or those that have overcome serious illness and injury to bounce back and move forward with life in a positive way. 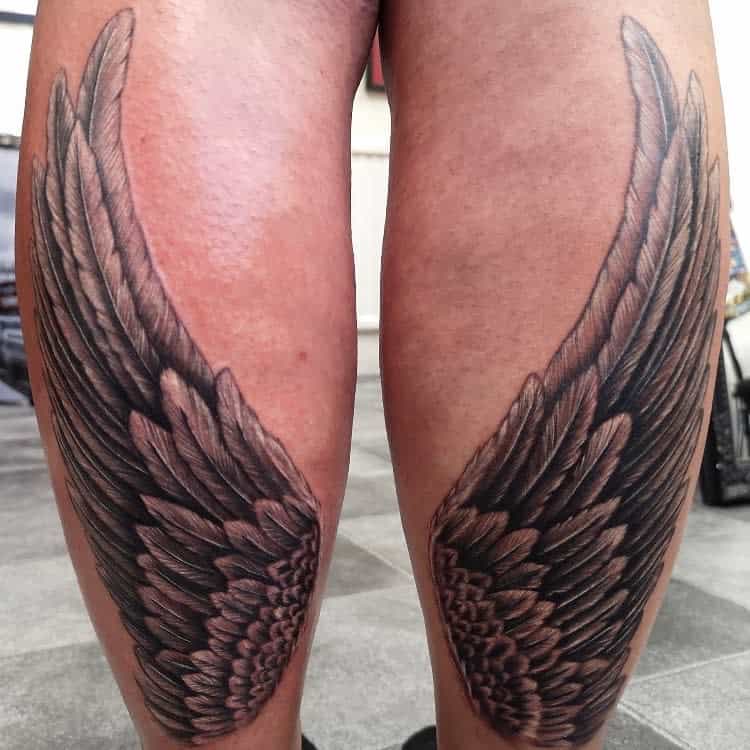 Angel wing tattoos are also linked heavily with classical Greek mythology and art, and the Gods of the Greek pantheon which differ greatly from contemporary religion.

One very specific type of small wing symbol belonged to Hermes. Both a deity and a mythological figure, Hermes effectively ushered souls into the afterlife, among many other roles.

In legend, he is able to move quickly between our world and the world of the divine, aided by his winged sandals.

Wing tattoos depicting Hermes are often winged sandals, a single wing, or a pair of wings etched by the tattoo artist near the foot or ankle. 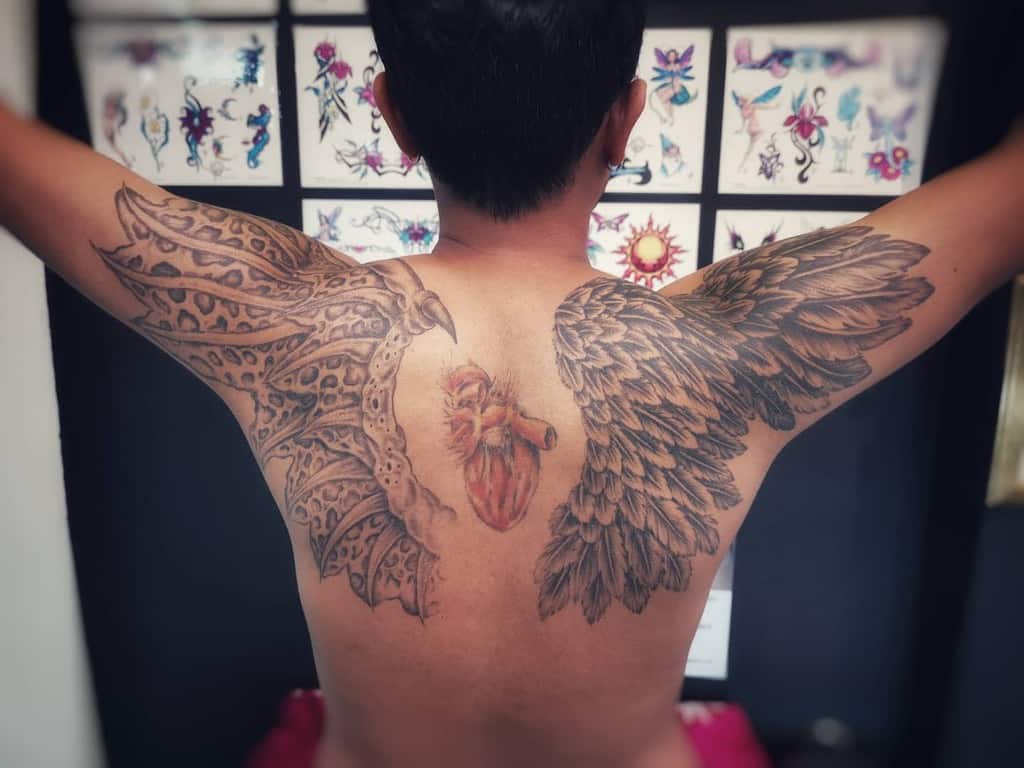 Fallen angels reflect the path Lucifer took when he was dumped from Heaven and cast down into Hell.

The devil wing is deployed to remember difficult choices, memories, and challenges that may not have ended with a satisfactory outcome, but deserve to be referenced.

Others prefer a demon wing or dark angel to meld an aesthetic design with the true meaning of tough experiences. 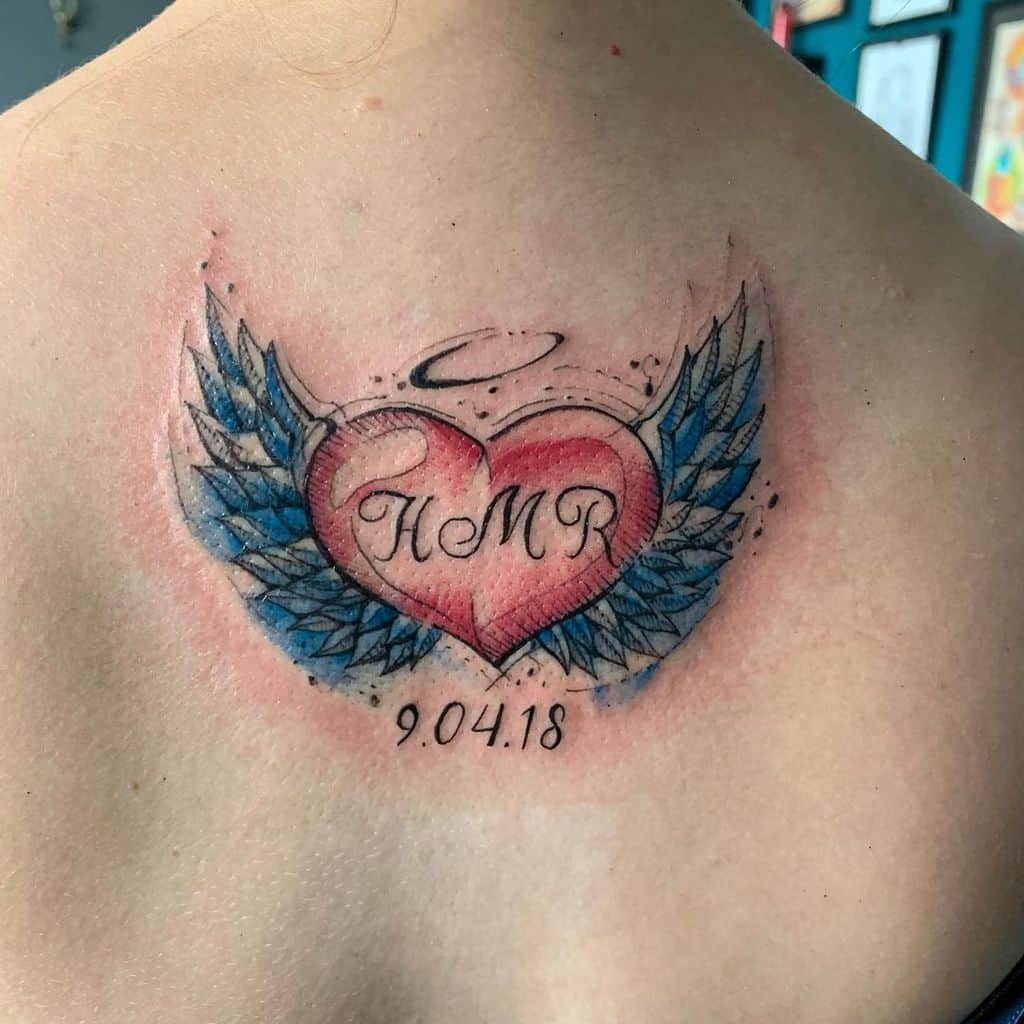 Heart with wings tattoo designs combine the heart’s theme of eternal love with the grief of loss represented by the wings of an angel.

Winged heart tattoos most often memorialize the loss of a lover or close family member.

They are a powerful, beautifully symbolic tattoo idea that can be expressed in a multitude of technical applications, ranging from old school and linework designs to contemporary ink of great detail, bright color, and individuality. 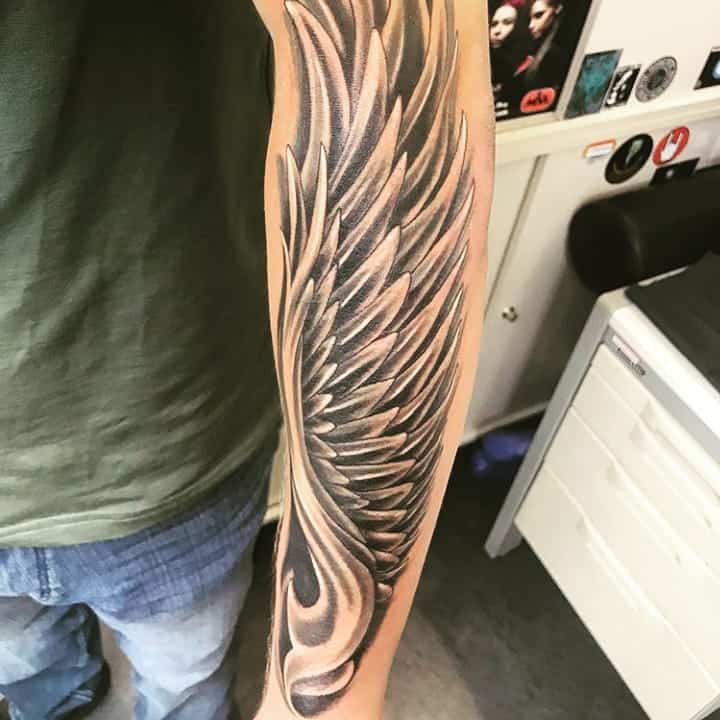 Outside of religion and protection – although also maybe as part of their desirability – wings have made their way into ancient tales from practically every culture across the globe.

Man’s desire for wings goes back to the dawn of time – enviously watching birds soaring through the sky – and is used in tattooing as a way to depict and explore concepts of flight, freedom, and power.

They are commonly associated with both birds and angels. Tattoo depictions of these often look very much alike, with a specific portion of the tattoo differentiating it as one or the other. Dark angels can be referenced by dark or black wings, as can birds such as crows and ravens.

A wing tattoo can also represent flying away from something towards new, better experiences. These old circumstances could be a difficult childhood, dead-end hometown, or a different version of yourself that you’ve left in the rearview. 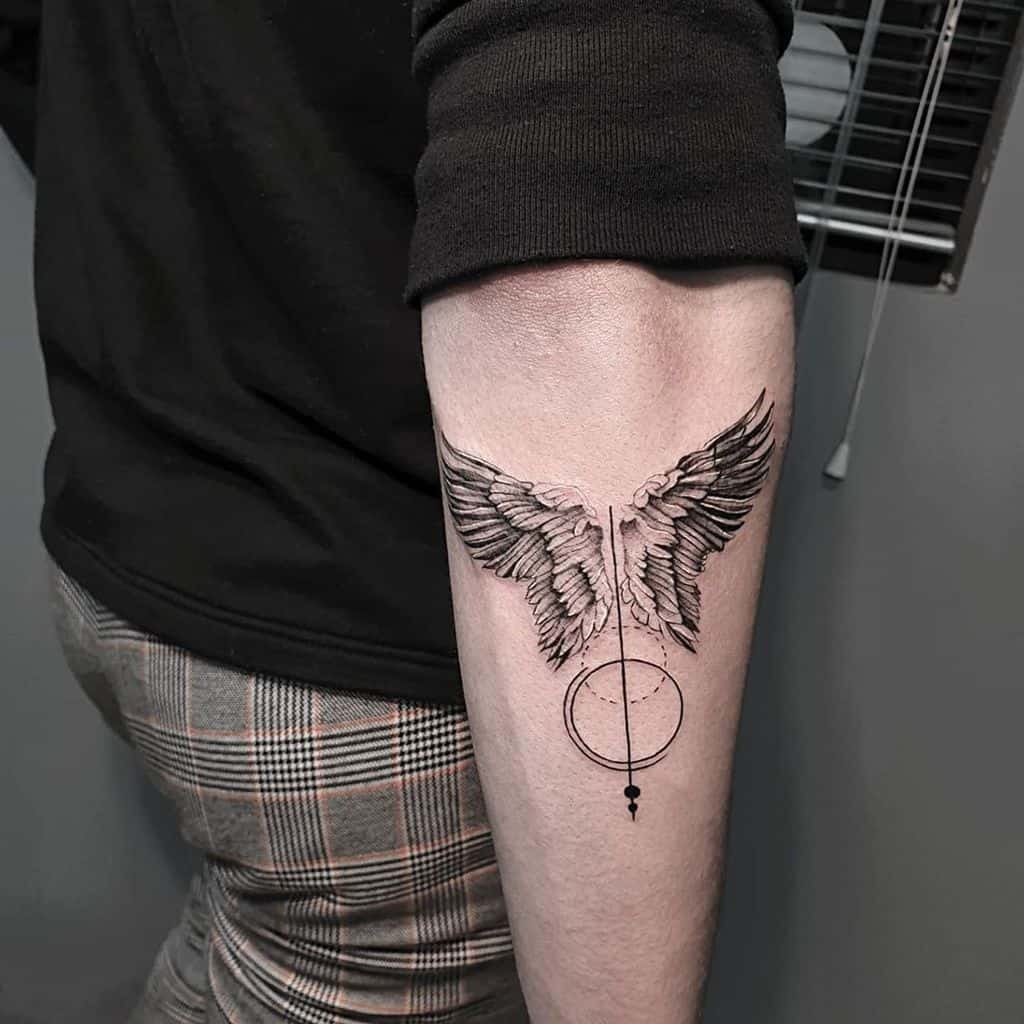 For some body art collectors, the decision to get simple, smaller designs has absolutely nothing to do with symbolic meaning.

They are often a purely aesthetic and economic wing design choice based on the application style that appeals most to the subject that fits into the desired placement.

Some individuals prefer bold black ink wings, complex single needle rose design, or more nuanced angel wing tattoos because they fall in line with the style of tattoo art that they like, or mesh best with other tattoos they possess.

Many contemporary collectors enjoy tiny wing tattoo ideas that they can place in visible areas. These placements may include the fingers and hands, behind the ear, or on the neck and shoulder blade.

See more about - Peony Tattoo Meaning – What Do Peonies Symbolize?