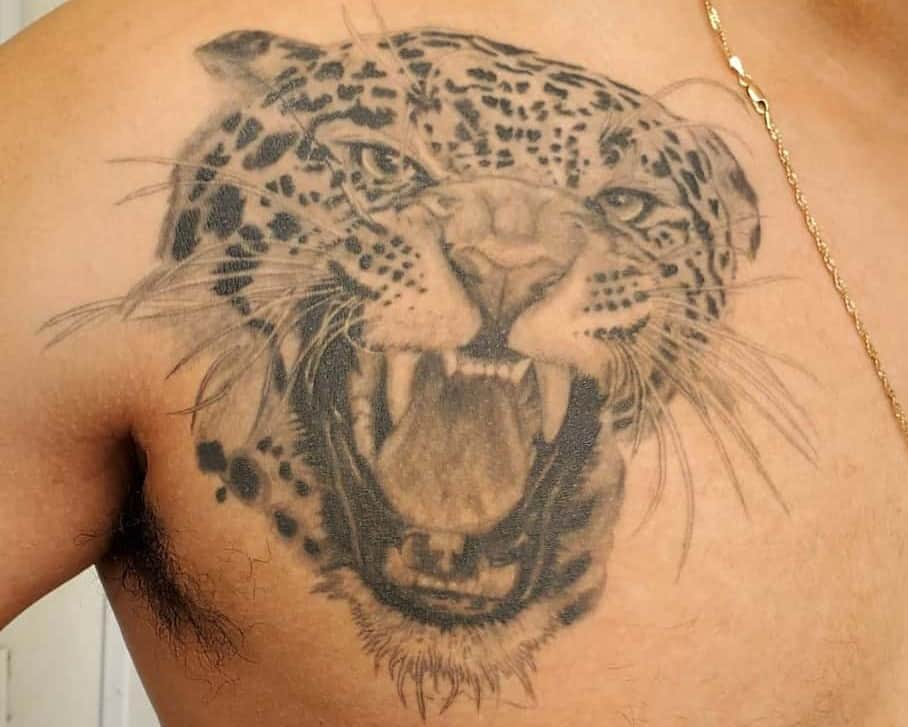 The jaguar tattoo is a powerful symbol of bravery, strength, and determination.

The big cat is a popular and enduring tattoo subject for both the old school wearer who likes symbolism and the neo-traditional collector looking for realism and aesthetic value in the Jaguar body art.

The Jaguar is also hugely influential with collectors that have roots in Aztec and Mayan culture who are looking for symbolic tattoo designs.

The story below outlines the major symbolism linked to jaguar tattoo ideas and how the beast is used in different technical approaches. 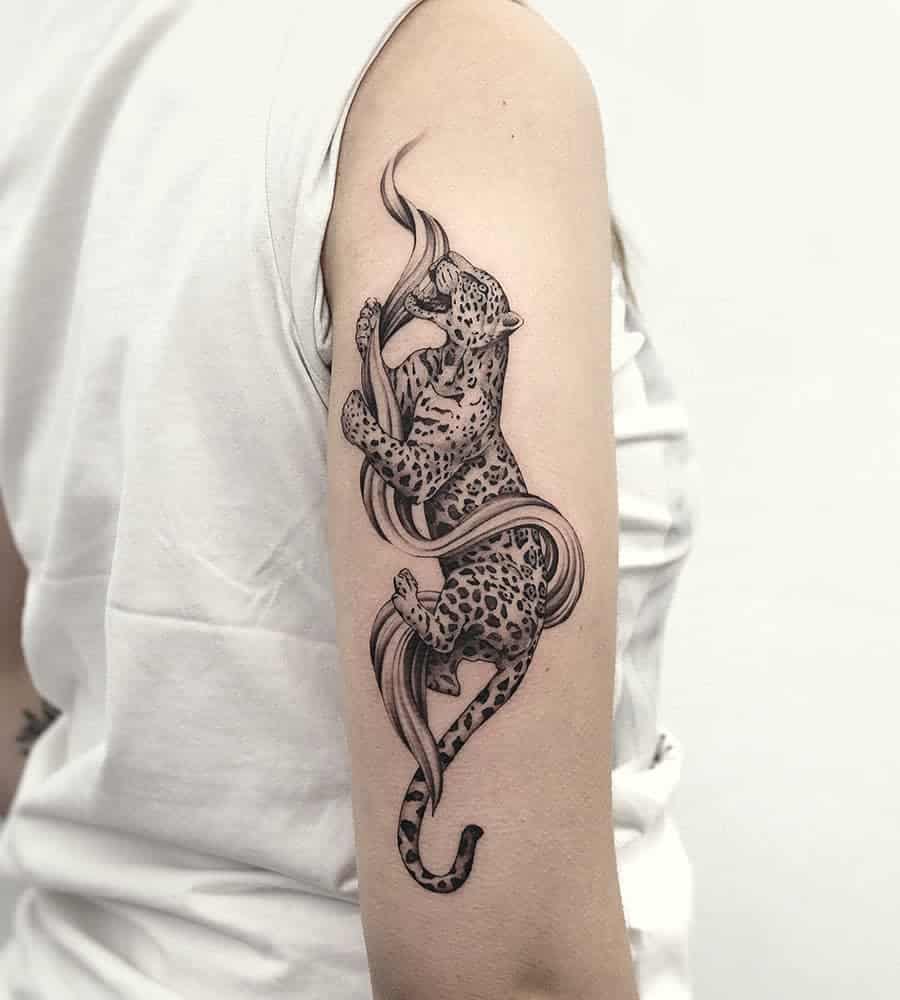 The main reason that animal tattoos depicting a jaguar (and other sleek big cats like panther tattoos) remain so popular is the way they perfectly convey a sense of bravery, power, determination, and inner strength.

Jaguars are also closely associated with ferocity and killer instinct, given they have the strongest bite force of any of the large cats, this is a well-earned reputation.

In more contemporary tattoo ideas, the jaguar is used primarily as an aesthetic choice in geometric tattoo design or realistic jaguar tattoos that are meant to look like a mirror of real life. 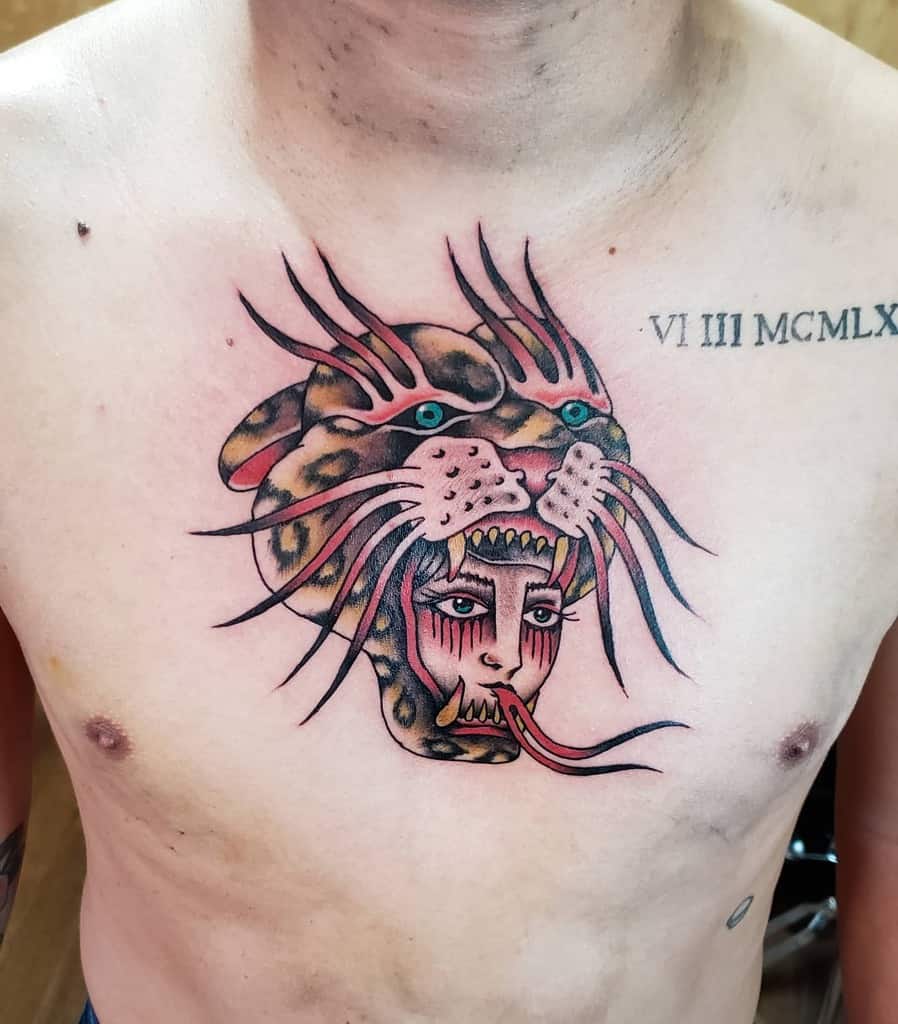 Legendary tattoo artist Sailor Jerry used jaguar and panther tattoo designs a lot in the images and flash art he produced for American Servicemen and women.

They were often used with other imagery to depict the conquering of fear and doubt with elements of inner strength and determination.

Examples of this old school symbolic aesthetic include: 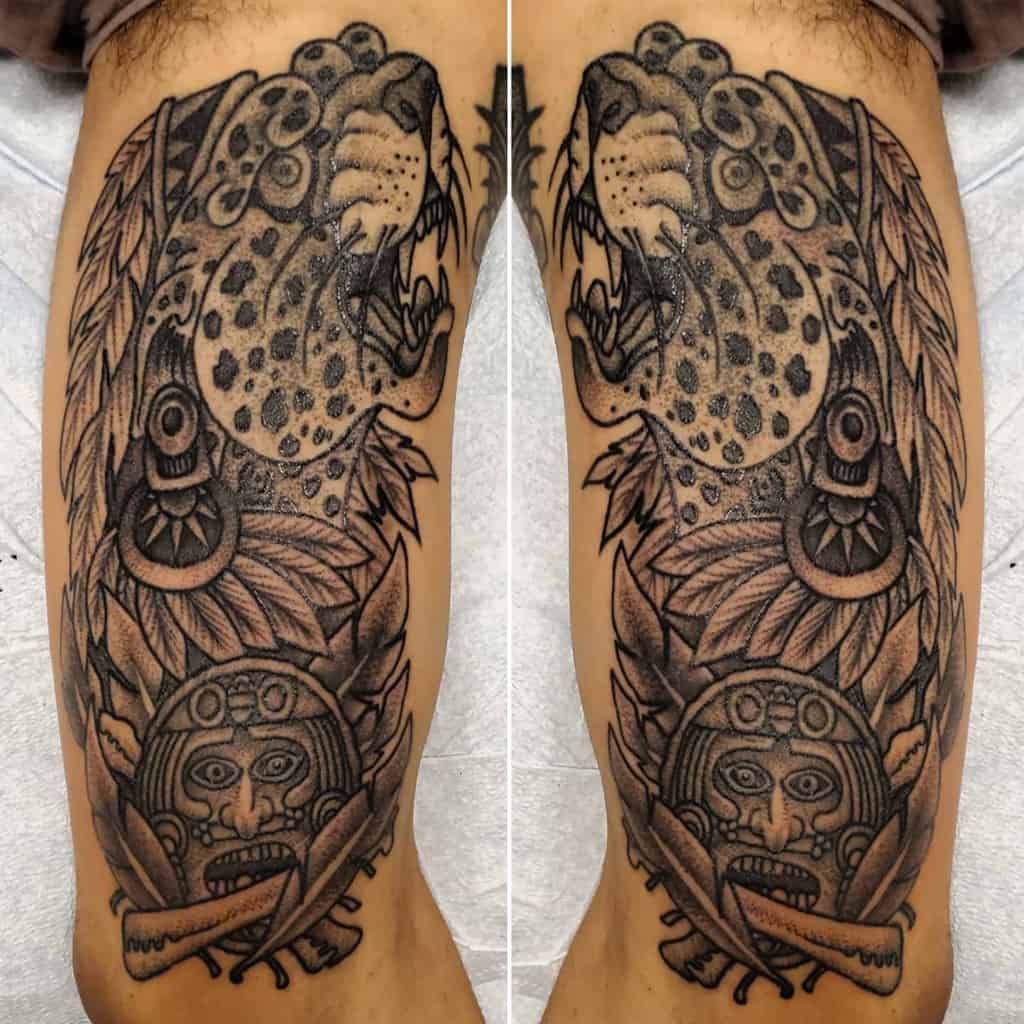 The Jaguar played an important role in Central and South America thanks to its fierce nature – an attribute highly valued in the Mayan and Aztec cultures.

The prototypical Aztec warrior associated the jaguar with ferocity, power, and fertility; the Aztec term ocelot had roots in their word for jaguar and was used to describe those people that belonged to the warrior elite of this war-like culture. To be a Jaguar Warrior was a point of pride.

The Mayans had an even deeper symbolic relationship with these jungle cats. The Mayans had a number of gods that were depicted with jaguar features or as a black jaguar, although the most powerful jaguar totem was that of the God of the Underworld.

One of the oldest of the Mayan gods, the Jaguar God of the Underworld played an important role in the overall worldview of the Mayan people and contributed heavily to their myths and legends.

Some people choose to integrate the big jungle cat into tribal Maya or Aztec tattoos, or ink designs recreating their favorite tattoo style. Others choose a Maya or Aztec idea for the opportunities they provide their tattoo artist to bring other elements into the piece, from battle scenes and landmarks to imagery such as flags and family names. 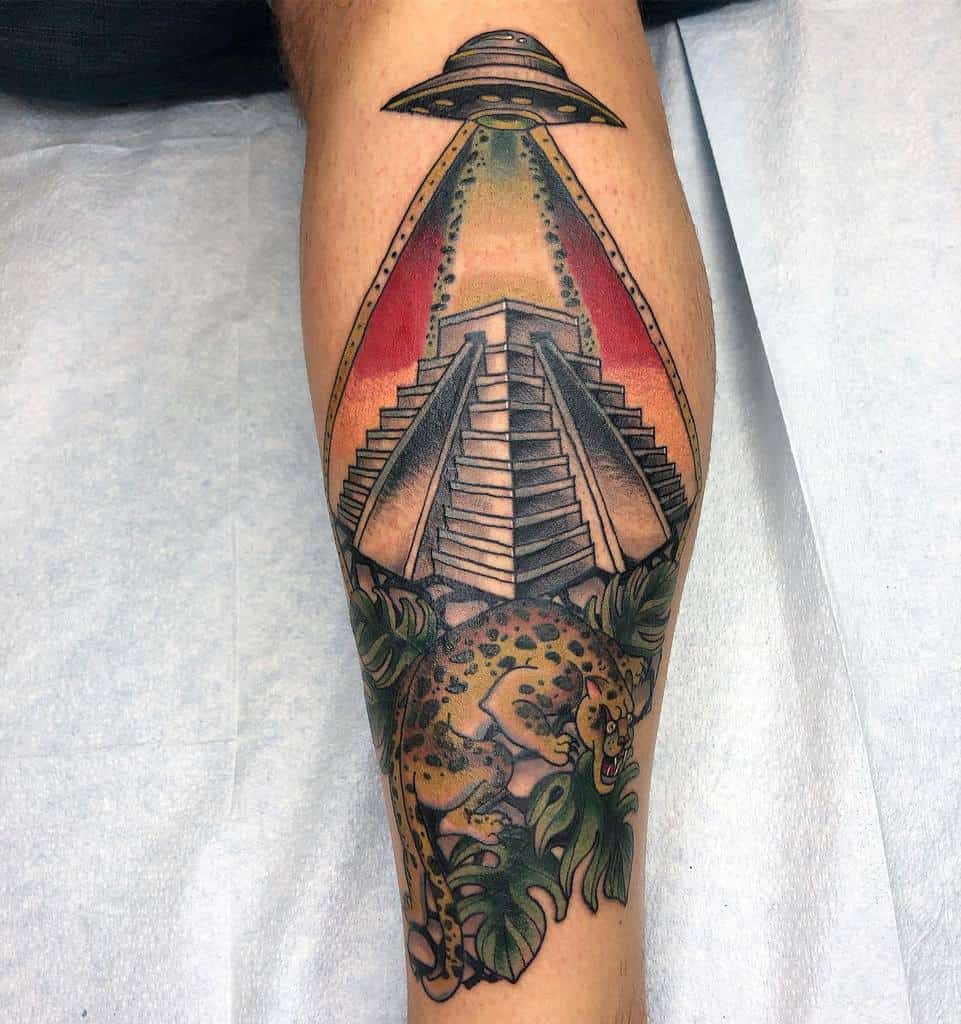 Born from the bold lines and bright solid colors of American traditional tattooing, neo-traditional tattoo design retains many of these traits while freeing the artist to use a wider color palette on a broader selection subject matter, from your classic spirit animal tattoo wilder and more fantastic body art.

Neo-traditional work allows artists to tackle a limitless selection of subjects and ideas – such as skull, tribal, or floral imagery – making it a great choice for a jaguar tattoo or even simpler central imagery such as (black panthers) 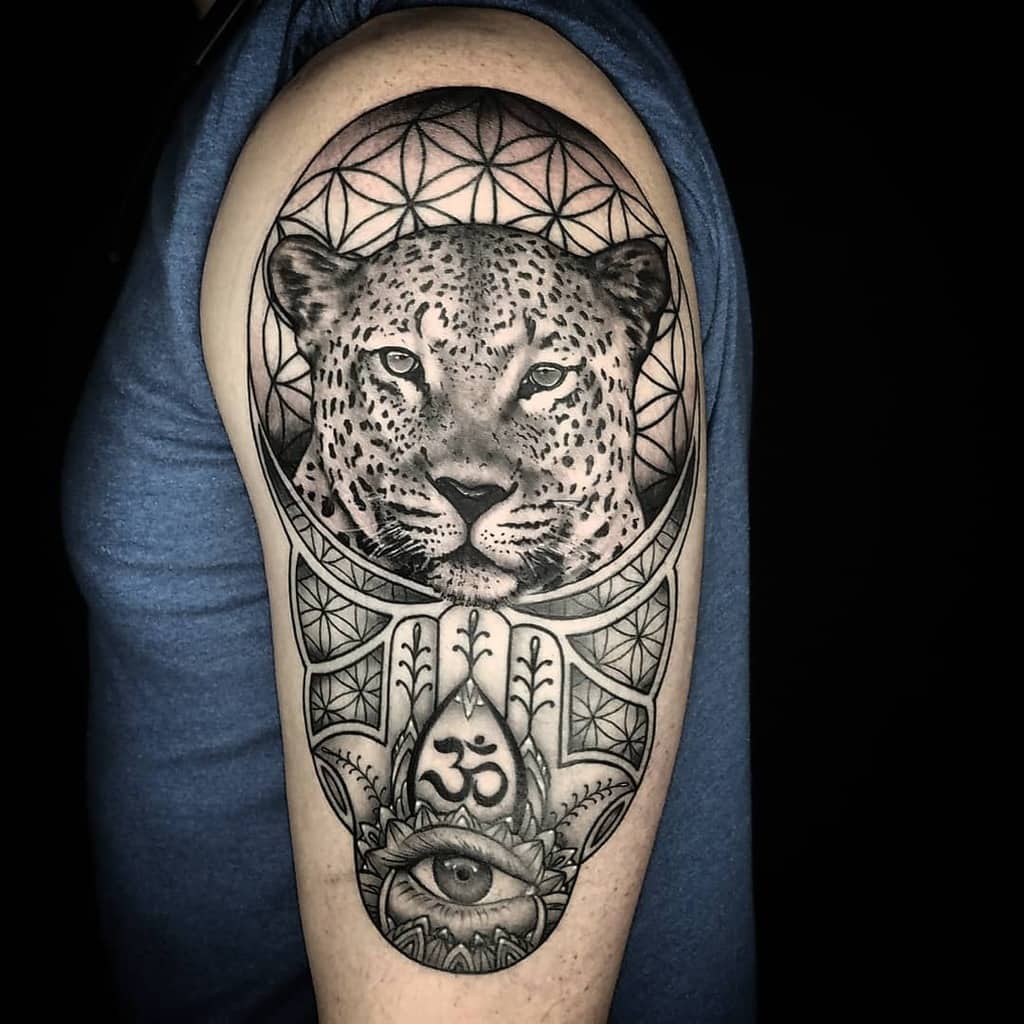 There is a classic sensibility to black and gray work, plus those that choose this approach don’t have to worry about colors fading over time, as black and gray tattoos tend to age better than colorwork.

This monochromatic approach to tattoo design is especially well suited to jaguar tattoos thanks to their unmistakable spots: even without color, anyone who sees one of these pieces will know instantly what kind of big cat is being depicted.

A growing trend in tattooing sees more people eschewing the intricate shading that is often associated with black and gray work to take a more subtle approach.

Much like Native American tribal tattoo or Polynesian body art, the focus is on the relationship between line work, pattern, and negative space when creating interesting feline tattoos. 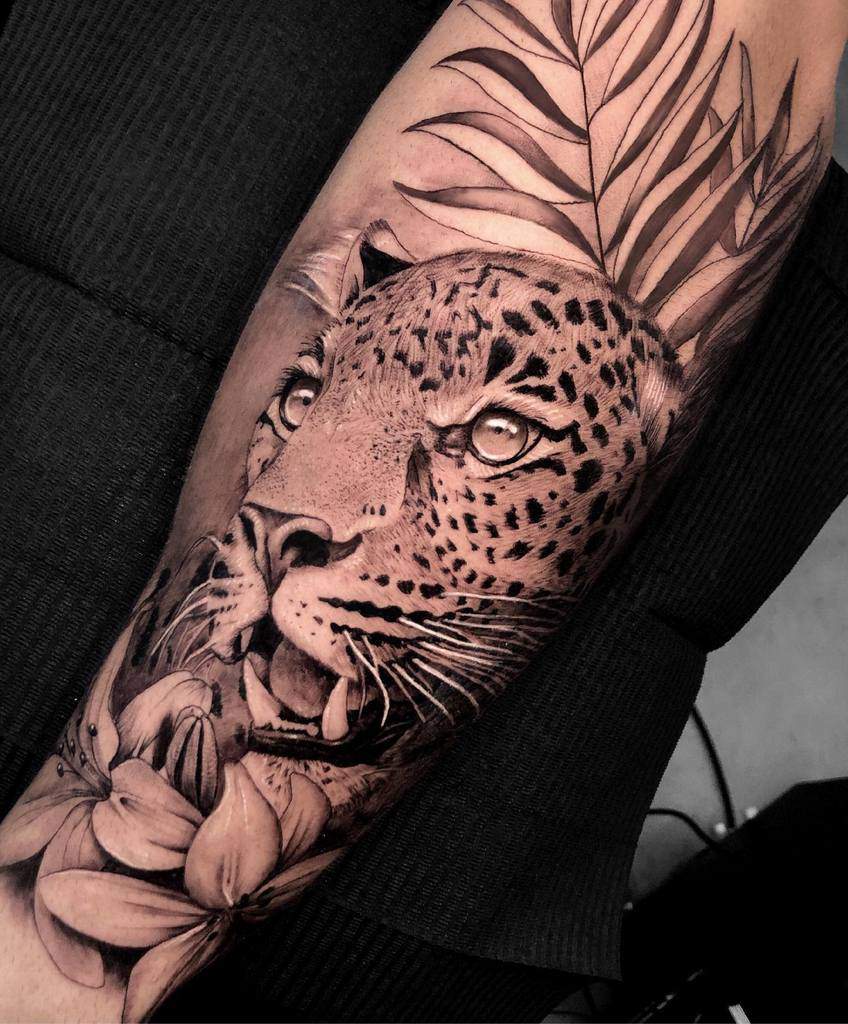 One of the most dramatic styles showcasing an artist’s skill and dedication are animal tattoos employing a photorealistic approach. The wearer who goes for this approach is less likely to establish deeper symbolic meaning – it’s all about the real animal.

This realistic style is not limited to the human face or bringing portraits to (near) life. Top artists – who often work solely on these realistic tattoos – can apply this stunning realism to jaguars to create tattoos that come straight out of the pages of National Geographic.

Whether in full color or black and gray; placed on the shoulder of a woman or stretched across a man’s entire chest, a realistic jaguar motif is one of the most arresting, unique designs you will come across.