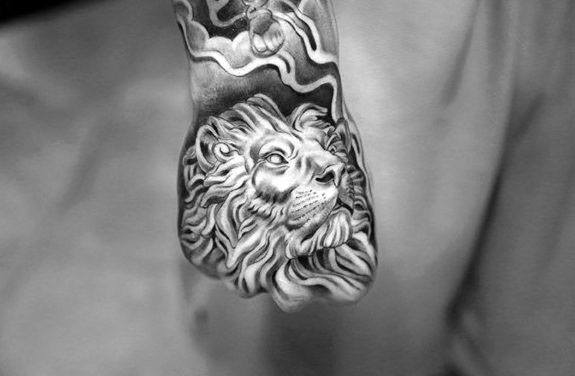 Lions are often used in animal tattoo art to describe power, physicality, or leadership due to the big cat’s position as the King of the Jungle.

From the proud astrological sign of Leo to Aslan, the fabled ruler of Narnia, the lion is the king of both man and fellow beast, a symbol of courage and regal bearing.

Famous across world history and the breadth of tattoo culture, the following article defines the different kinds of lion body art and the range of symbolic or application meaning attached to big cat tattoo art.

You’ll find plenty of useful knowledge that you can take to your tattoo artist to create your perfect lion tattoo design. 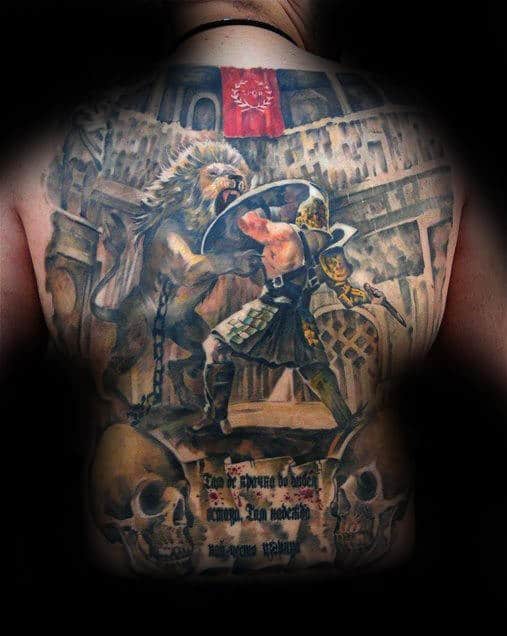 The ancient Romans often used the symbol of the lion to express their love, while ancient Egyptians carved great statues of two lions with their backs touching in representation of eternal balance.

Alternatively, the lion tattoo idea can be used to represent one’s Christian and Islamic beliefs. The Chinese were the first to grace their palaces and monuments with guardian lions made from stone.

Medieval Europeans held the lion as one with royalty, even keeping them as courtly pets, while in African belief systems the lion is linked to self-control and discipline.

Lion symbolism is also hugely popular in England due to its association with the three lions banner of King Richard the Lionheart, which is used as the country’s badge in popular sports such as football, cricket, and rugby. 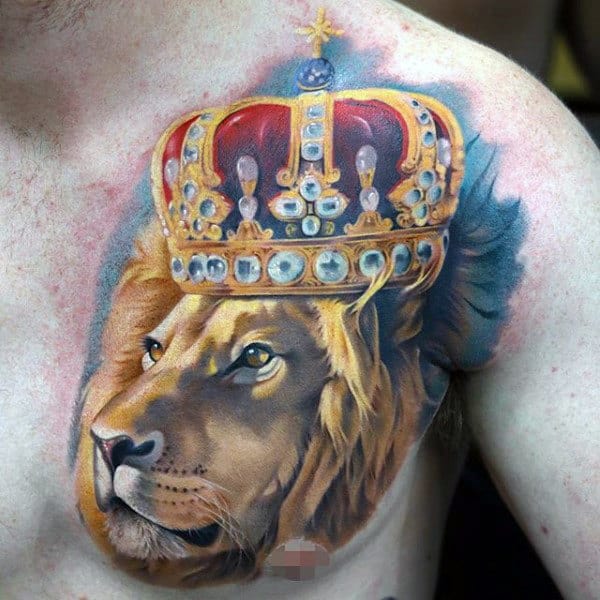 No animal approaches the lion in regards to regal sentiment, which is why you’ll see a lot of crown tattoo ideas.

Not only has the United Kingdom flown the crowned lion on its flags and coat of arms for centuries, but the beast itself is also chief among royalty in the animal kingdom.

A crown tattoo on a lion’s head can indicate a regal bearing and noble nature. And since the male lion is the King of the Jungle, no king is fit to rule without a crown. 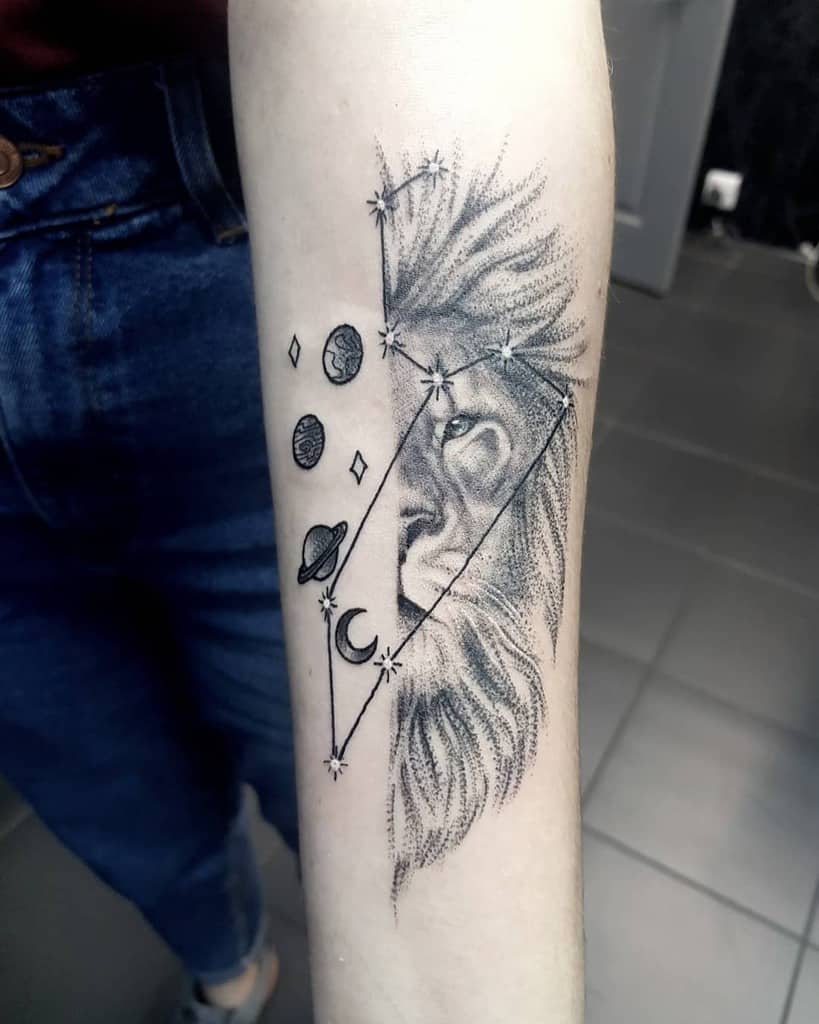 Originally, the Leo constellation was deciphered to be the shape of a lion by early astrologers and stargazers.

The astrological lion tattoo is used more often than the simple constellation, strengthening its position as the chosen lion symbol used to represent a Leo tattoo.

Not coincidentally, traits of the lion’s behavior and personality are attributed to people sharing the Zodiac sign and Leo constellation. 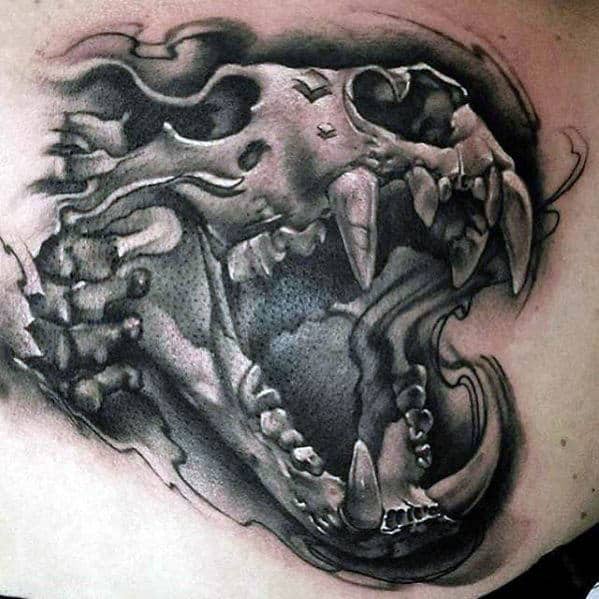 The skull of a lion is a deeply symbolic icon that weaves a complex tapestry of strength, wisdom, and death.

The skull is a classic tattoo subject for many reasons, but it’s the fact that such an image conjures immediate feelings of fragility and mortality that draws so many to it.

The decision to select a lion skull tattoo is one that speaks to the innermost core of someone’s character. There are numerous ways to create an abstract or literal image of a lion skull for a tattoo, but they all have the same core meaning.

They represent an acceptance of the true nature of the world and show that nothing is fully alive or fully dead.

Different Types of Lion Tattoos and Their Meanings 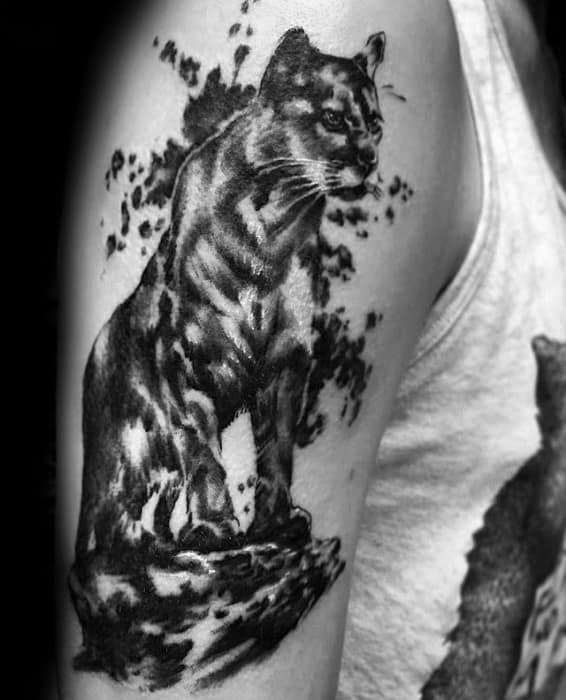 People choose the mountain lion tattoo to symbolize their solitary natures. They rely on themselves and that’s just fine with them. They keep to their own territory and won’t tolerate anyone blowing up their spot to feed on prey that should have been theirs.

Puma, panther, catamount, whatever it is in your region, these mountain lions are the biggest cats in North America.

A mountain lion can leap 15 feet in the air and move as silently as a shadow. They always attack from behind and prey never hear them coming until it’s too late. Their jaws are strong enough to crack the spine of any creature around. 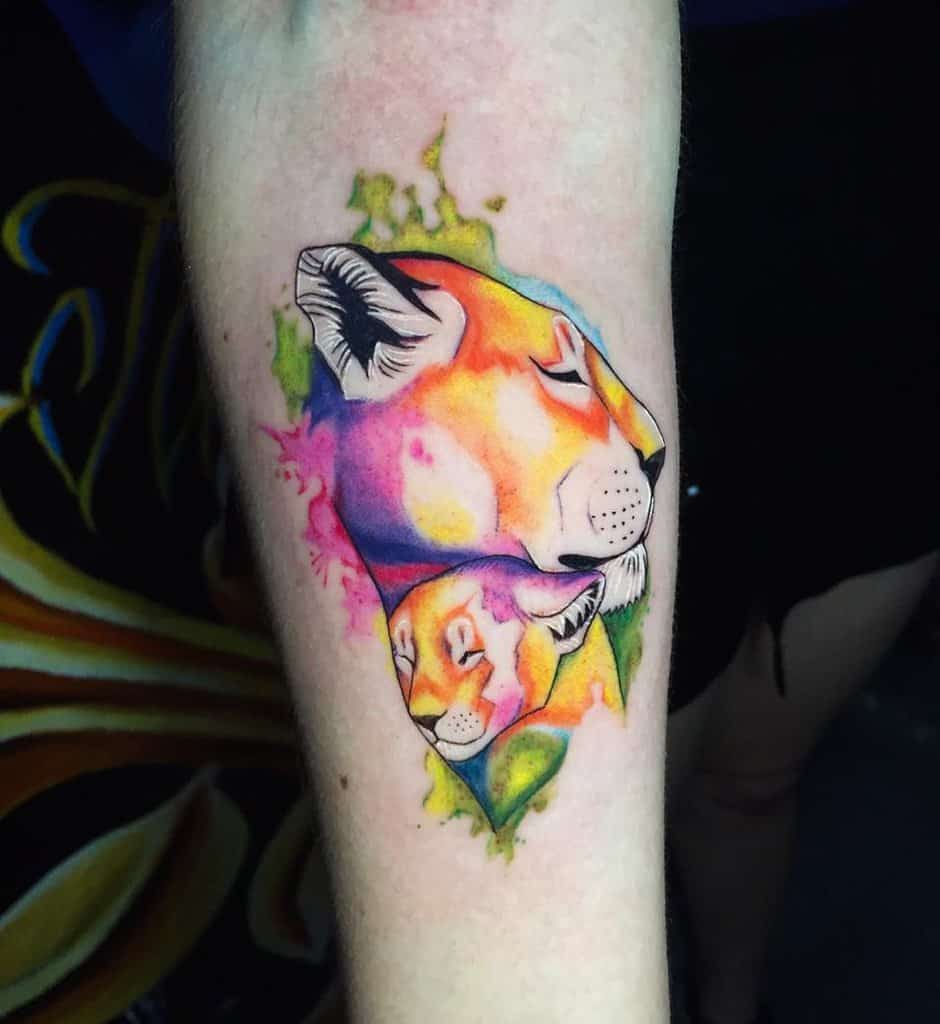 The lioness is a powerful animal perfectly suited to the subject of tattoos, either individually or in conjunction with male lion body art, often as a matching tattoo of a lion face of two halves.

Whether female lion tattoos are prominently placed and meant to be publicly displayed, such as a rampant lion on the hand, or are more private and intimate thigh tattoo pieces, a lioness serves as a powerful statement of the wearer’s strength and determination. 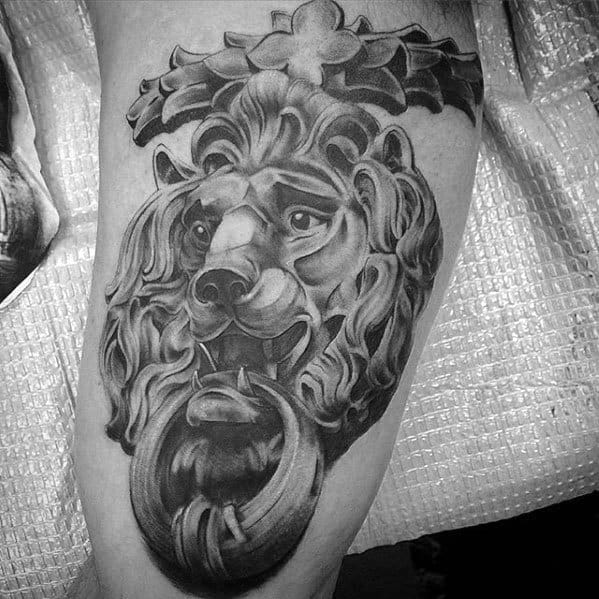 Beginning first under the Han Dynasty, statues depicting the Chinese lion soon spread throughout Southeast Asia. They were believed to act as spiritual protectors over the premises they guarded.

Lions also played a significant role in Arthurian legend. In Chretien de Troyes’ medieval romance, Yvain, the Knight of the Lion, the hero rescues a lion from a serpent. This tale solidified lions as the symbol of the conquest of good over evil through might and valor.

Lions accompany the monument of Trafalgar Square in London, the Monument of the Unknown Soldier in Sofia, Bulgaria, and a monument in Lucerne, Switzerland, that stands in memory of Swiss Guards who lost their lives in combat. 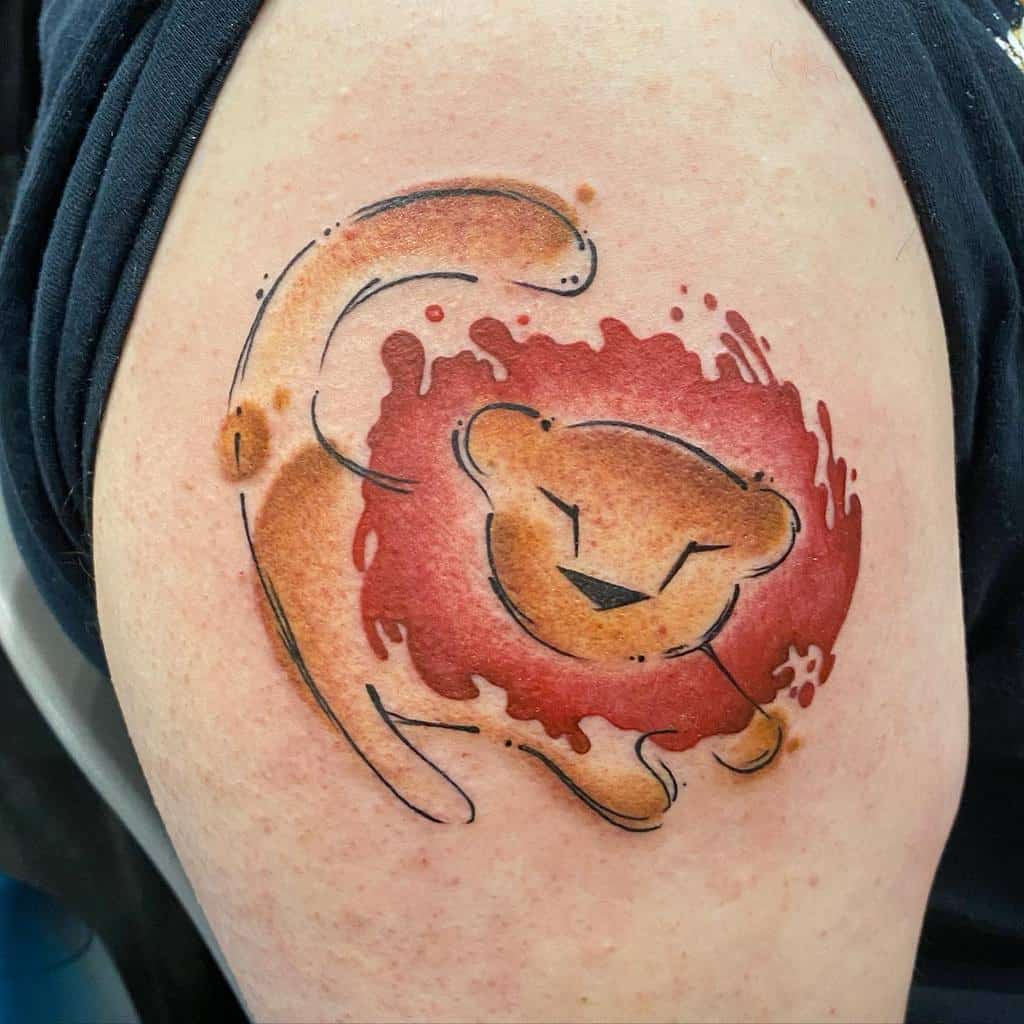 Disney’s Lion King movie has captured the imaginations of countless fans around the world.

With the recent reboot of Disney’s greatest movie, it’s no surprise many people choose a Simba tattoo to demonstrate their love for all things Lion King. 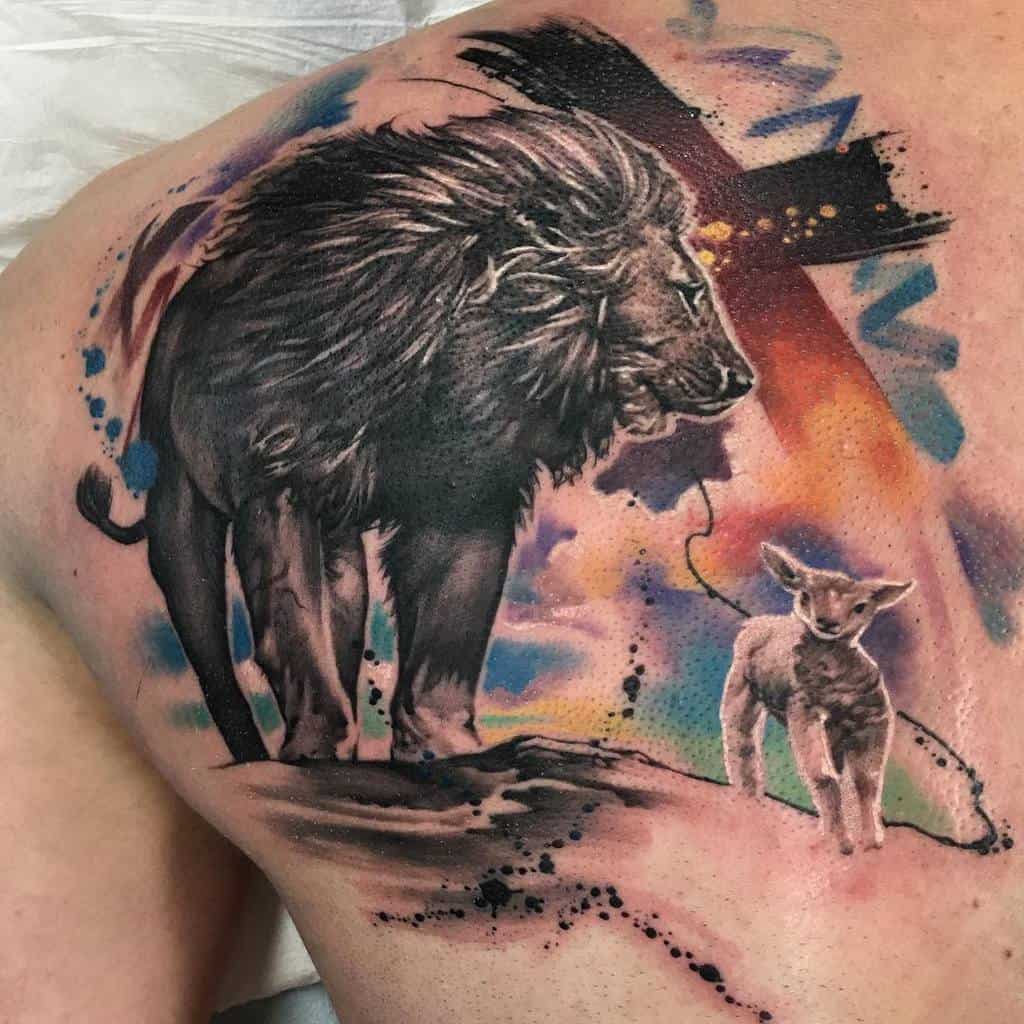 The relationship between the lamb and lion is primarily a Christian theme representing Jesus Christ, his sacrifice, and the resurrection. Saint Augustine once gave a sermon relating to Jesus as “enduring death as a lamb; he devoured it as a lion.”

For those not inclined to religion, a quote from the Russel Crowe film Robin Hood, “Rise and rise again until lambs become lions,” also suffices for a lion and lamb tattoo.

Both examples look to juxtapose the lamb – innocent, meek, and gentle – with the power, nobility, and ferocity of the King of the Jungle. 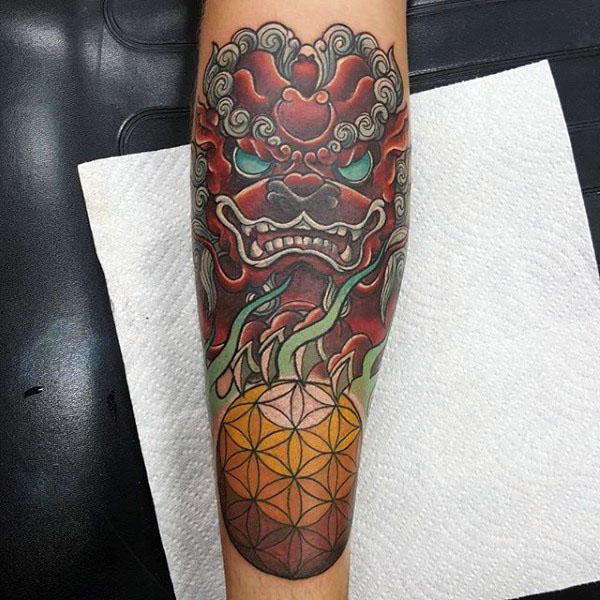 With ties to ancient Chinese temples, Foo dog tattoo ideas offer profoundly spiritual connotations to anyone who flaunts them.

Foo Dog tattoos are a homage to Buddhism and their presence on Earth stems back thousands of years as guardians of spiritual worship centers throughout Eastern culture.

Although their title inherently summons the nature of canines, Foo Dogs actually possess the resemblance of mythical lions but differ somewhat from other Chinese lion tattoo ideas. 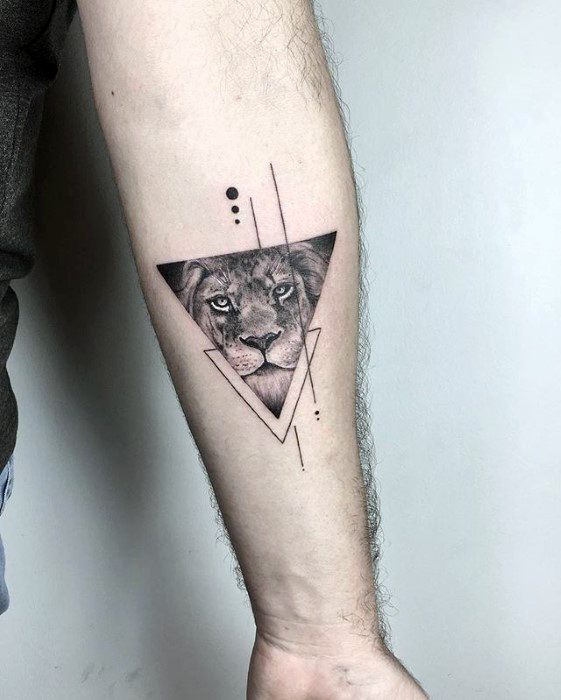 A roaring lion tattoo need not be large and imposing; it can be equally ferocious when etched in small designs.

Lion tattoos are a great animal symbol linked with nobility, strength, and honor, and these characteristics can be aptly defined in small body art.

The choice is yours whether to go for something realistic or geometric, a colorful lion or even a classic design incorporating Simba or Mufasa. 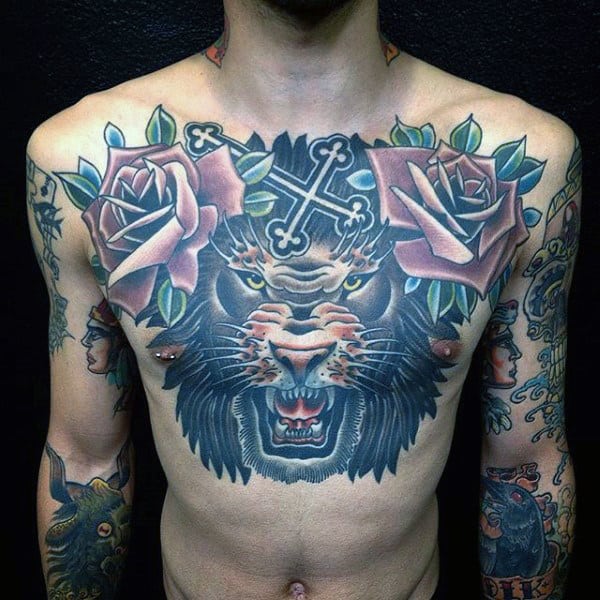 Some see the lion head as a symbol of royalty and strength, making American traditional lion designs a very liberating style of application.

There are others who see the lion as a religious symbol. This stems from the times that a lion was mentioned in religious texts or in literature that used the lion to represent a higher power. 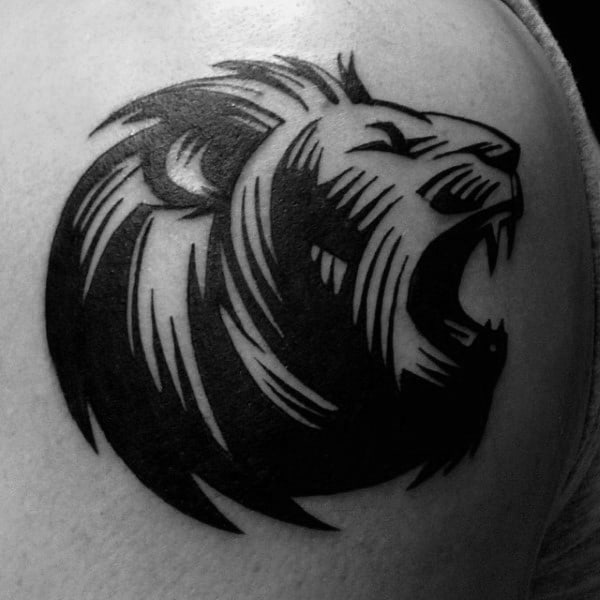 A lion Tribal tattoo is a ferocious embodiment of enormous strength and physicality played out on skin. 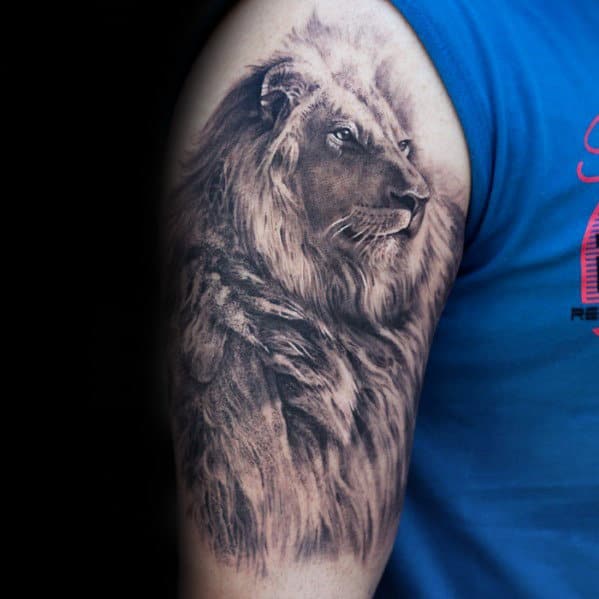 Not all lion tattoo designs require a stylized or cartoon depiction; many prefer a realistic lion face or roaring lion tattoo.

Survivors of physical trauma may choose to tattoo the figure of a lion over previous scars or injuries, as a mark of triumph over adversity.

Others opt for a life-like rendering to raise awareness for this endangered species. And some will tattoo the lion’s profile directly over their heart, a declaration of the true “lion heart.” 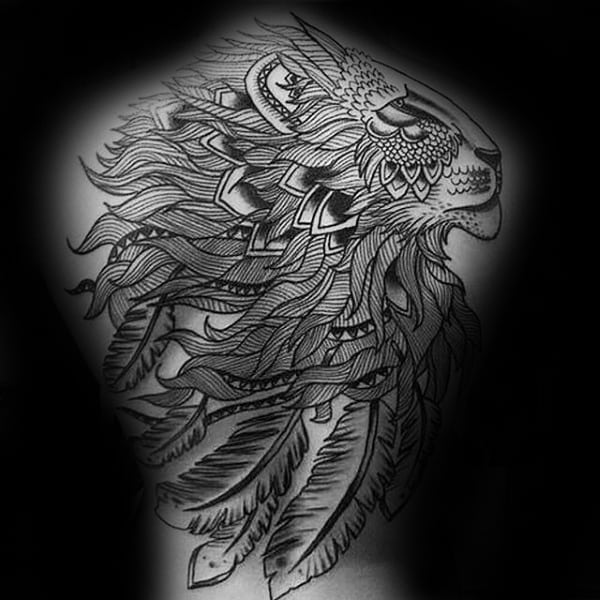 Whether you are looking to celebrate your astrological Leo tattoo in a more sophisticated rendering, or drawn to the ruler of the animal kingdom in general, the geometric lion is nothing short of a work of art.

The geometric tattoo style of ink ideas is gorgeously suited to the lion’s likeness, offering a counterpoint of shape and line to the beast’s more fearsome characteristics. 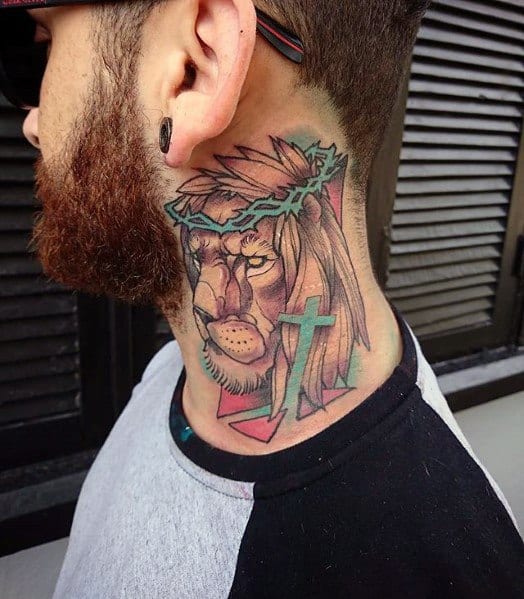 The neo-traditional style can help you modernize your lion tattoo and add a unique, abstract flair.

Your lion tattoo can be strong, fierce, courageous, loyal, noble, and proud.

Oftentimes, a neo-traditional lion tattoo is just his face or profile, so it can be especially detailed, while a kaleidoscope of colors and shapes can make it more vivid and interesting.

If you’re looking for a lion design with individuality and pop, a cool neo traditional piece will stand out.

No matter what avenue that you take, a lion tattoo can be varied and compelling in practically any style, with a huge range of symbolic concepts that you can apply to make an excellent and unique piece of body art.