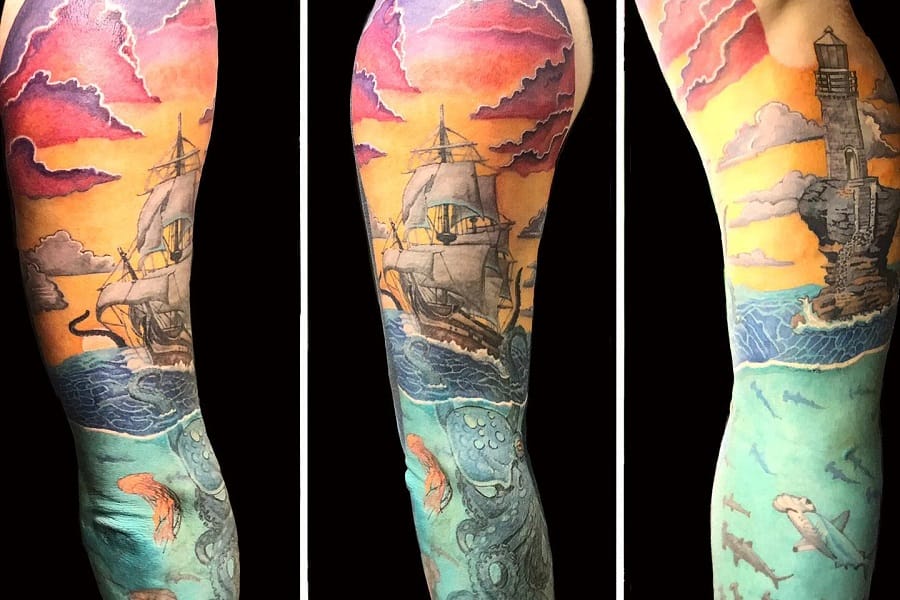 Many individuals use an ocean tattoo as a metaphor for mystery, depth of character, and the intricacy found in the human mind.

The depth of oceans, their dark vastness making up more than 90% of the world’s surface, and the fact we humans cannot breathe underwater unaided in provides traction to the concept of mystery. Their sheer size and difference within them make for brilliant tattoo ideas.

The innumerable strange, interesting creatures that live underwater, from the massive, ponderous whales, the ancient turtle, or the blind fish in the darkness, also hold mystery and magic.

Surfers, sailors, swimmers and fisherman – who hail from coastal cities, towns, and villages – often get tattoos to signify their love for the deep blue seas, the beaches, or for its providence. Their respect and love for the ocean is often depicted with body art.

Read on for our beautiful tattoo gallery celebrating the ocean, the coast, and the animals that call it home.

A talented tattoo artist can take any ocean concept you wish for and turn it into a top-quality sleeve. If you’re looking to combine an idea laden with symbolic meaning – such as the ocean’s depths and personality – with frolicking/dangerous sea creatures or a color effect like the sun’s red ocean sheen – then these examples will serve nicely as inspiration.

The artists here have applied bright and rangy color palettes, realistic detail in the sea creature – that hungry Great White and the torpedo looking killer whales are amazingly bad ass – and shadow/shading effects and white ink fills in the patterns of the water.

I love the red ocean tattoo effect of the sun glinting on the surface of the water and approaching blue barrel. It’s something you’d find in a landscape painting or water photography collection of a gnarly long boarder from Santa Monica.

I love the different application each tattoo artist in these examples have used to convey the sheer size and scale of these whales. Some have been given the chance to go large and deploy more than one of the massive sea creatures on skin.

Other tattooists, with more restricted room to work with, have either simplified their whale by creating a water frame to shape the image, or deployed an alternative such as breaching or image splitting to convey size.

Check out the killer whale color fishbowl idea – it stands out by creating a border to operate within and conveys the Orca’s size and potential menace despite containing a brightly cheerful image of clown fish and coral inside.

The range of technical applications in these ship tattoo ideas are brilliant. There’s even variety from the classical pirate or clipper ships a sailor would have gotten inked back in the day.

Each example above features a small piece of brilliant technical work. There’s the use of scrubby black hatchwork that’s in between dotwork and slash, some cheeky white pigment highlights to give the art some glow, or canny use of negative space.

I like how the larger upper arm tattoos create their borders quite naturally with wave or rope or octopus tentacle, while other tattoos on the leg or forearm go for an alternative light bulb, or even no border but an ending of color.

If you could ‘pause’ life for a bit on one of those Boston whalers (I think that’s what it is), things can’t be going too bad.

Such a tremendous range of ideas expressed in these landscape tattoo designs. All have concepts tied to the ocean, whether it’s a sunrise or sunset over the still water, crashing, churning waves, water filled with all manner of ocean creature, or even a memento mori tattoo reminding you that death waits for us all.

I love how any person can walk into a tattoo studio with the same basic idea, but have it expressed in any one of 1 million different ways. I think that’s part of the mysterious aspects of an ocean tattoo – that it affects everyone profoundly, but on an individual level as well.

You can’t have a watercolor tattoo without some water effect, so it’s an application that works well in an ocean tattoo idea. These examples display the tremendous range in blue color you can apply to your ink, or even other colors that can be used to accentuate the central linework and concept.

To be able to put a large amount of color in the body art, but have it complementary to the central design (such as geometric linework) or overall concept (such as a semi colon tattoo) works well for those looking to use color with more nuance.

These color waves don’t differ much from the watercolor tattoo examples above, they tend toward more standard blue ink. In a paint store they’d be filed under some variation using the term ocean, and for good reason.

What’s impressive about each example – whether Japanese influenced, or more western application – is that they look to complement their waves with smart use of white pigment. In some, it’s a clear design feature and focal point, while in others it’s a very subtle highlight meant to finish off the art.

I have a life size octopus tattooed on my right side, an army of koi fish, and a couple of churning waves here and there. I’m all about ocean creature and water tattoo, mostly because they’re badass, but also partly because they’re weird, interesting, and mysterious.

These examples tackle the amazing groups of sea creature in myriad different ways, all with great skill in application technique. The only one I wouldn’t consider myself is the sting ray – and that’s purely because of Steve Irwin – but the rest all offer the kind of wonder you get when visiting an amazing aquarium, or gaze through a glass bottom boat

You need not go large under the water. There’s variety to be had in minimalist, delicate, or small tattoo idea. The natural advantage to these types of tattoo image are that they can be placed demurely away for you and the chosen few, or proudly front and center for everyone to admire.

A tattoo artist that loves linework can have a lot of fun with different ocean tattoo ideas. Waves flow and heave in different types of lines, as do sea creatures like the jellyfish, turtle, marlin, or shark. All it takes is to figure out how a subject wants these lines displayed, then get stuck in.

Both conventional old school tattoo and more hyperactive offshoot fundamentally need to work with designs of the ocean. A man walks into a tattoo shop… for 40 years would most like have been a sailor or serviceman of some description, so these designs are bread and butter.

Putting these examples under one heading allows for good comparison of the similarities and differences. The linework, color application, and central imagery align, however the color palettes and peripherals don’t. It doesn’t really matter when you get results like these.

Waves are linked to the idea of motion and the inexorability of tides and time. They never cease travelling, even in motion when seeming completely still. Being able to depict the movement of waves and tides in black and gray ocean tattoo design takes skill and mastery.

These tremendous ocean wave tattoo ideas show off all the techniques displayed in other techniques. It’s like without shackles of color, the application behind each piece can be explored to the fullest.

Looking for more inspiration in planning you new tattoo? Click on the links below for more cool tattoo galleries:

Many individuals use an ocean tattoo as a metaphor for mystery, depth of personality and intricacies of the human mind. Other ocean tattoos holding symbolic are simpler: many people live by the sea, are tied to waves and the tides, or love the creatures living underwater.
In contemporary tattoo, the ocean (and forests) have also become symbols synonymous with environmental conservation and sustainability.

Many individuals use an ocean tattoo as a metaphor for mystery, depth of personality and intricacies of the human mind. Other ocean tattoos holding symbolic are simpler: many people live by the sea, are tied to waves and the tides, or love the creatures living underwater.

In contemporary tattoo, the ocean (and forests) have also become symbols synonymous with environmental conservation and sustainability.

What does a wave tattoo mean?

Waves are also a popular symbol for displaying emotions, everything from calm tranquility through to epically raging meltdown can be described in the depiction of a wave

What is the meaning of mountain and wave tattoos?

The mountain wave tattoo represents the meeting of ocean water and earth, or the balance between elements of dreams and practicality. Water symbolizes our deepest emotions, the earth represents practicality and necessity