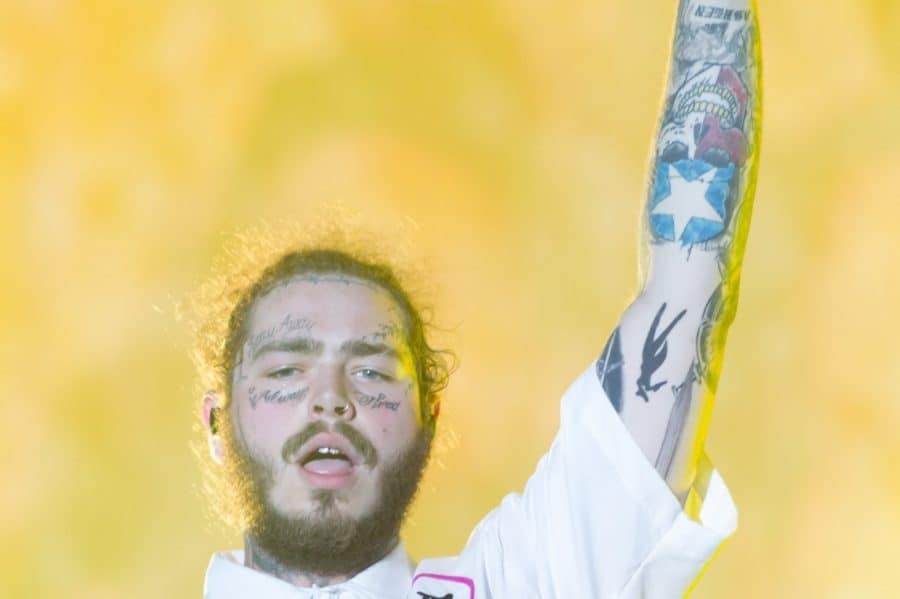 Known as much for his tattoos as for his unique vocals and genre defying blend of hip hop, grunge and country music, producer singer, and rapper Post Malone has inspired a new generation to embrace bold, innovative ink and tattoo placement. 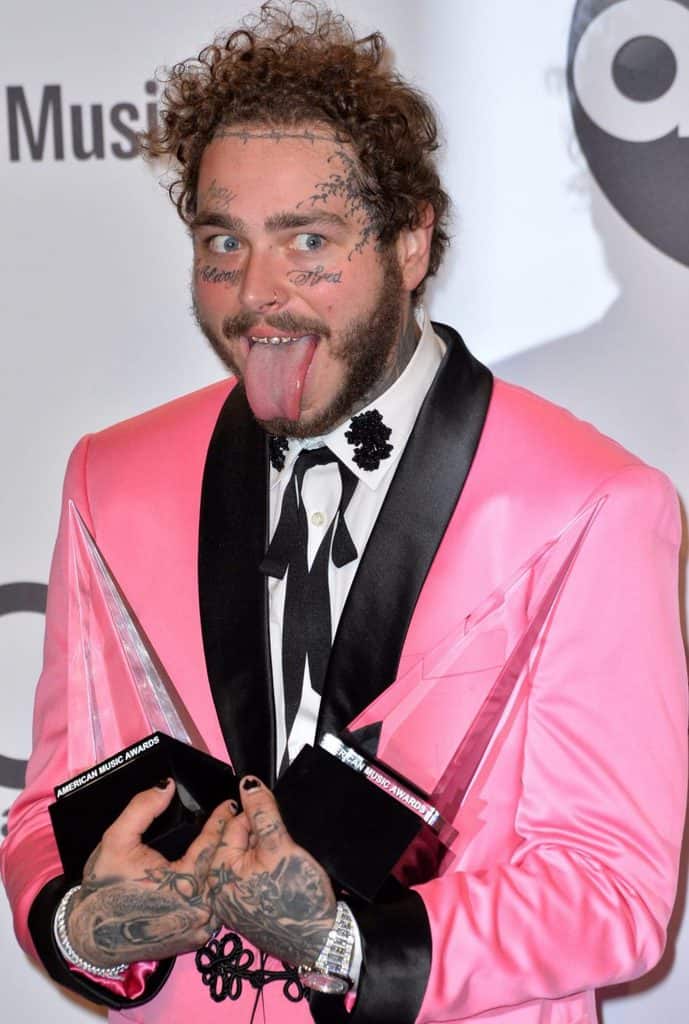 Despite the growing acceptance of tattoos, ink on the face is still considered extreme, although even this is changing rapidly thanks to notable musicians such as Post Malone and Justin Bieber.

It’s been widely reportedly that it was Bieber who set the tattoo blaze alight for Post Malone by telling him in 2016 that tattoos didn’t hurt. Since then, he’s from a first tattoo, to getting inked more often than kids get temporary tattoos from the convenience store.

With well over sixty tattoos –from the classic skull tattoo through to circles, and body art paying homage to civilizations such as Ancient Rome and Ancient Egypt– Post Malone is in the middle of a full-blown ink explosion.

Read on to take a look at some of Post Malone‘s most prominent and exciting tattoos.

Look, it’s hard to keep up with all of Post Malone’s tattoos, whether you’re a fan of the artist or not. We’re pretty sure that this is his latest: a new face tattoo featuring a bloody buzzsaw blade! It was tagged by tattoo artist Ruben Reza from Junction City Tattoo, who’s done more than one interesting piece for the rapper. 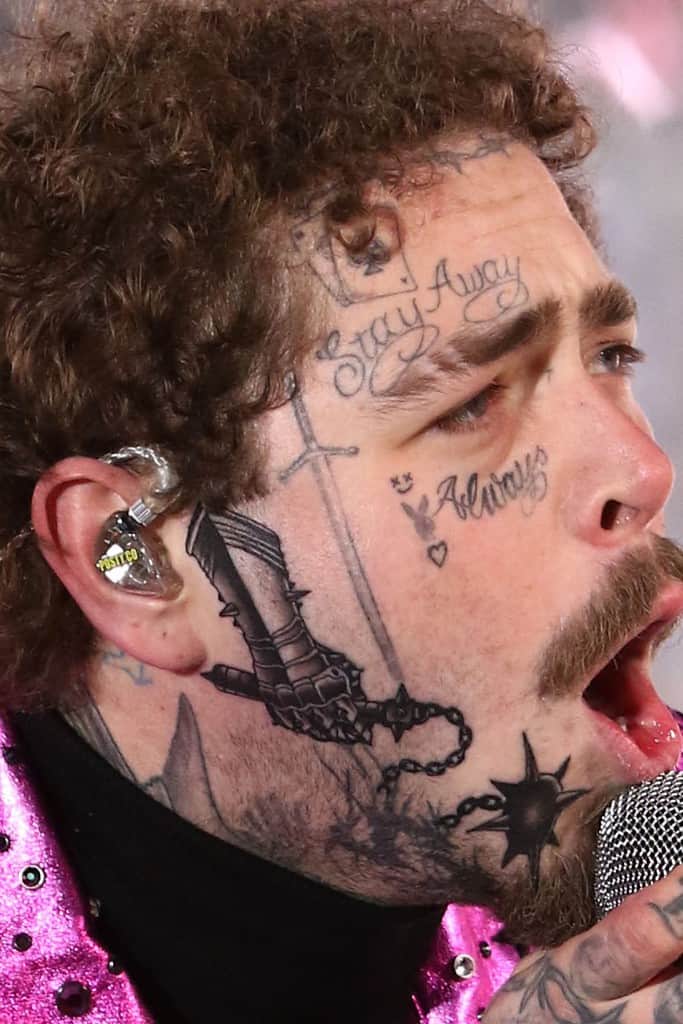 You don’t often see featured face tattoos , even amongst celebrity rappers. The medieval gauntlet and morningstar Post added towards the end of 2019 is certainly eye catching, even in comparison to his other facial tattoos and neck ink.

The gauntlet shoots down the right side of his face near his previously drawn Claymore bastard sword, while the Morningstar – a wicked spiked mace swung like an Olympic hammer by a knight on horseback in battle – snakes along his jawline. The whole piece is done in bold, traditional style featuring heavy use of black line ink, and was inked by artist Kyle Hediger.

In the past, tattoos were restricted to the world of sailors , bikers and convicts. Anyone sporting ink was viewed as part of the fringes of society. A lot has changed, and famous entertainers like Post Malone and Justin Bieber are central to the current explosion in visible ink expression. 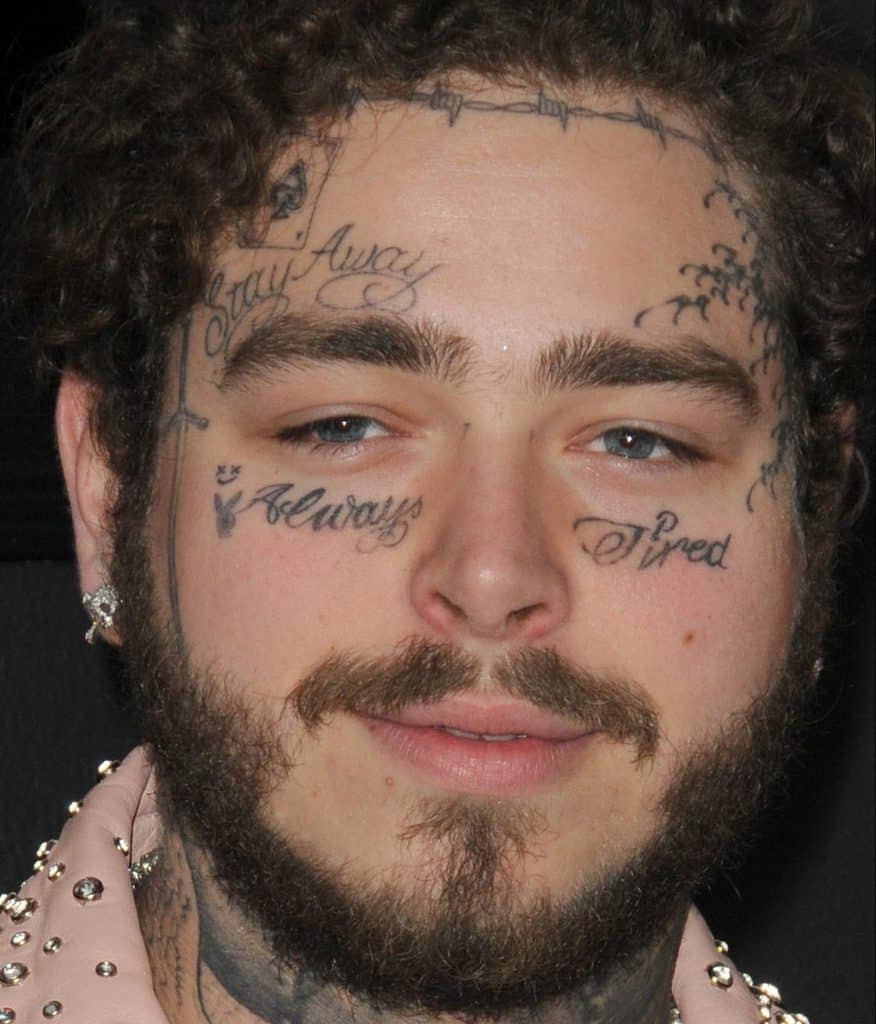 According to some polls, as many as 40% of millennials sport some kind of ink, and it isn’t uncommon to see visible tattoos on people from a variety of backgrounds and walks of life. Even police officers rock tattoos these days.

In the past, the forehead and face were the last parts of the body to get inked; many artists wouldn’t even apply ink to someone’s face unless they were mostly covered in tattoos. While Post Malone has plenty of ink on the rest of his body, the unique style of self applied face tattoo he favours represent his most dramatic work.

While those of an older vintage – even the tattoo heavy generation of the 1990s and early 2000s – shudder at the thought of even one face tattoo. For an artist like Post Malone, it’s just another personal way to try and be comfortable in an increasingly difficult world.

In a fascinating cover story Malone told GQ Magazine recently:“It does maybe come from a place of insecurity, to where I don’t like how I look, so I’m going to put something cool on there so I can look at myself and say, ‘You look cool, kid,’ and have a modicum of self-confidence, when it comes to my appearance.” 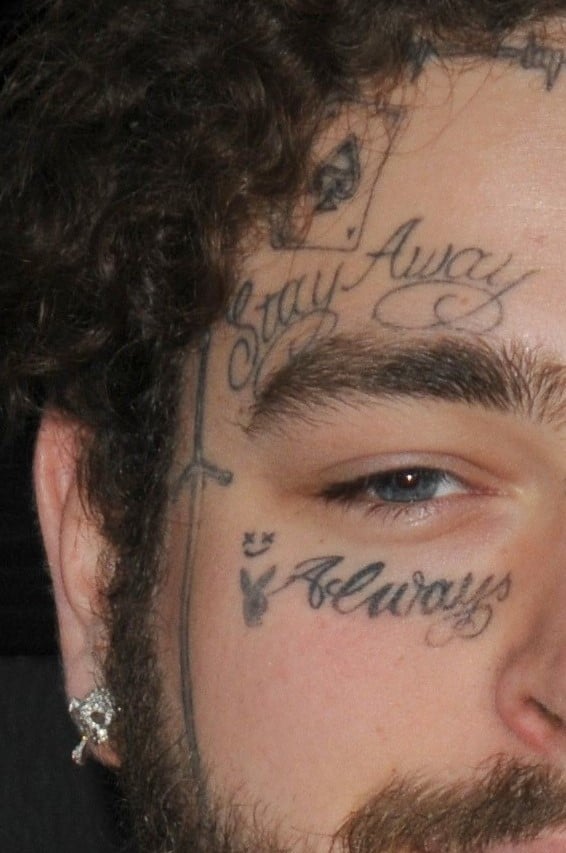 Located at the top of his forehead, Malone has a section of barbed wire applied in clean black and gray ink. While many people have suggested that the barbed wire tattoo came about as an expression of Post’s ongoing mental health issues and, he has never confirmed speculation.

The top of his head is only one of the spots where barbed wire is etched into Post Malone‘s skin. He also has a tat of barbed wire running across each hand above the knuckles, and there’s another barbed wire tattoo on his left arm.

Centered below the eye at the top of each cheek, Post Malone has “Always Tired” applied in a stylized cursive script. Despite theories about the deeper meaning behind the ink, Malone has responded with a more lackadaisical explanation: “I tried to do something that’s relatively the same length of letters. But I guess ‘always’ is more letters than ‘tired’…but I was tired, so I didn’t realize.”

Another interesting piece of script work that utilizes a similar cursive typeface as the other script on the right side of Post Malone‘s forehead, just above the hair of his right eyebrow. He explained that they are song lyrics, and that he also got the piece “to piss off my mom.”

Running down the right temple of his face Post has a medieval Claymore sword, also known as a bastard sword, tattooed in black and gray ink. Malone has mentioned in interviews that this piece stems from a childhood fascination with medieval weaponry.

“I’ve always been obsessed with knights and medieval times and ancient Egypt and ancient Rome and shit like that,” he said, again to GQ Magazine. 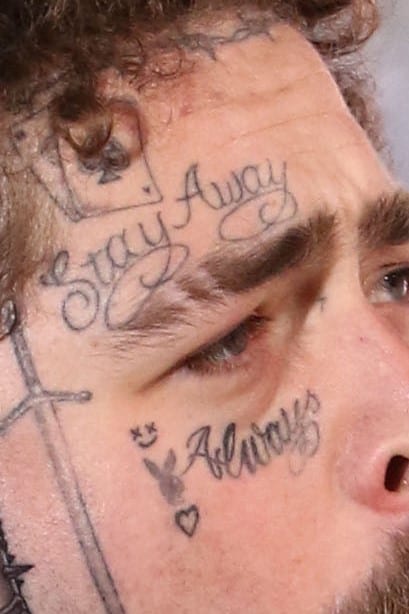 Coming out from the hairline on the left side of his face Malone has a stylized, black ink variation on the wave designs commonly found in traditional Japanese irezumi tattoos. Post got this ink while in Tokyo.

Located below his right eye, Post has a small and simple smiley face, with “X” eyes, and according to the man himself, this is another attempt to annoy his mother.

Below the smiley face is a tiny Playboy Bunny, one of several that Malone has inked on various parts of his body. While the connotations of Hugh Hefner’s unmistakable logo are fairly obvious, Malone has never spoken about this piece.

Below the Playboy Bunny, on his left cheek, Malone has a tiny, heart produced with black ink and negative space. Malone has never explained the motivation or significance behind this simple design.

Above his right eye, Post has a pair of black and gray playing cards with the ace of spades in the foreground. The deep symbolism associated with this card and placement at the forefront of rock and roll imagery thanks to Mötör Head, as well as the fact the Malone has never addressed the piece, leaves the meaning behind this tattoo up for speculation. 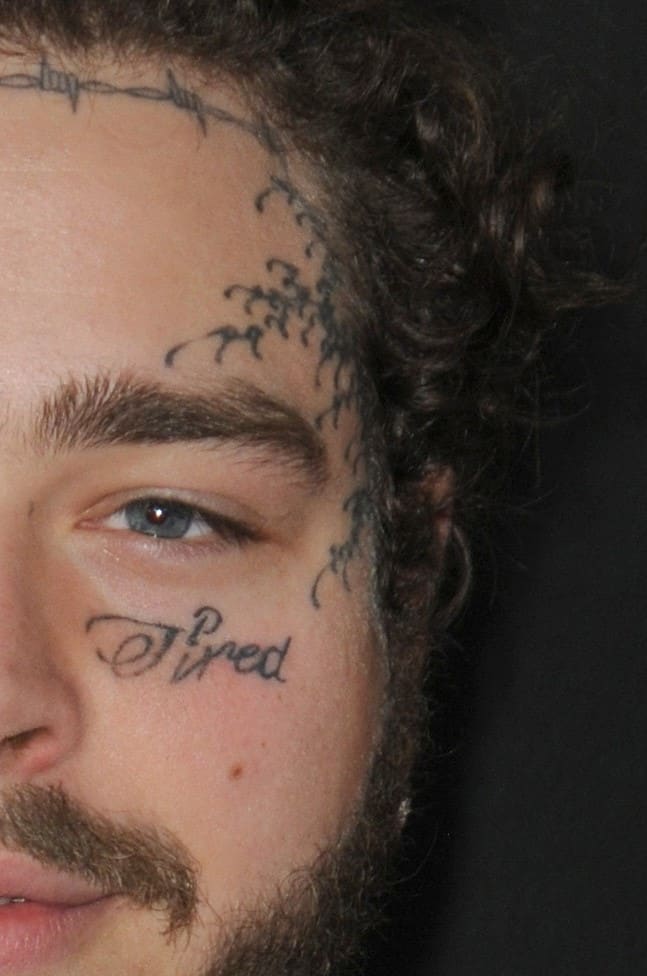 Malone has a variety of black and gray portraits of different figures that are important in his life. 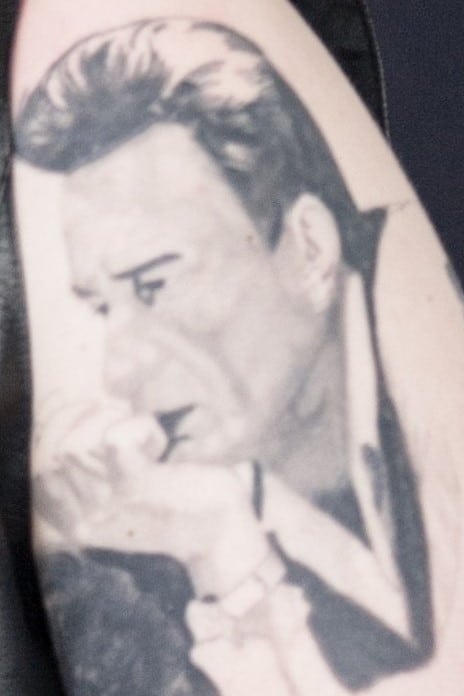 Located on his left bicep and completed using a photo-realistic approach with black and gray ink, Malone has a portrait of “The Man in Black.” This piece is a tribute to the musician and the impact the bad ass singer had on Malone’s pursuit of music as a lifestyle.

On his left hand, near the thumb, Post has a realistic black and gray portrait of the 35th president of the United States. Malone has mentioned that JFK was someone he felt people should “model their Americanism” after.  This brilliant piece was delivered by tattoo artist Victor Modafferi of Bullseye Tattoo in New York.

After the sudden death of friend and fellow rapper Lil Peep in 2017, Malone got the portrait as a memorial to the musician. Malone has stated he felt Peep died much too soon and never got the chance to fully influence the music industry and world the way he was destined to do. Despite their short friendship, Malone used this piece to honor the late musician.

On his right forearm Malone has a lightly etched World War 1 era soldier just below the elbow join. Below that is a fully armored medieval knight in battle, stabbing at an opponent with a long spear. Tattoos of this kind are often associated with courage. 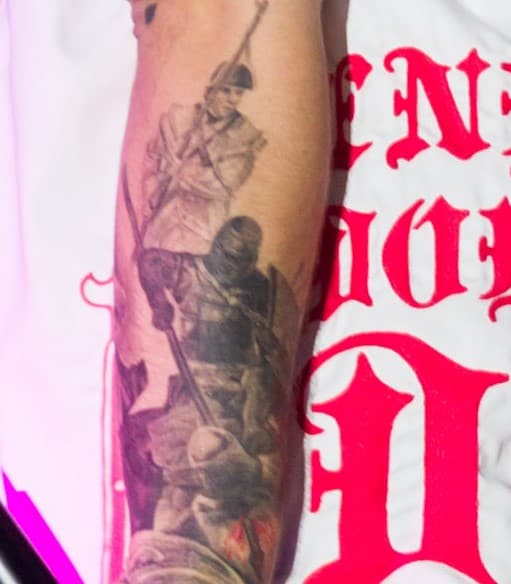 Along with a portrait shot of the Nirvana front many on one of his left finger and the classic lyrics ‘whatever’ and ‘nevermind’ on his palms – etched by tattoo artist JonBoy – Post has a black and gray action shot of Kurt Cobain smoking a cigarette and playing guitar, in the crook of his left elbow. 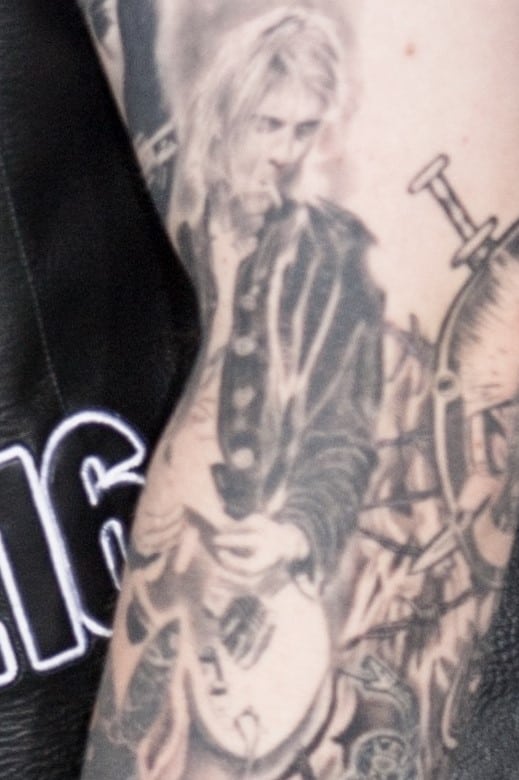 6. Dylan on the harmonica

Just above Cobain and next to Lil Peep Post Malone has a grayscale tribute to folk music legend Bob Dylan: the popular songwriter with a harmonica close by his mouth.

Malone has a series of small, black and gray portraits on the fingers of both hands. These represent different musicians that have inspired him over the years. Bankroll Fresh, Dimebag Darrell, George Harrison, John Lennon, Stevie Ray Vaughn, Kurt Cobain and Elvis all have their places on Malone’s digits. 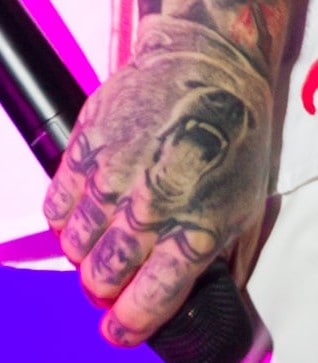 On his right hand above musician’s row and some barbed wire, Malone sports a bad ass animal realist roaring bear tattoo done in black and gray. Bears are another symbol of courage, but also strength and unwavering concentration.

Malone has a simple black and gray lit match tattoo at the outside base of his right thumb. 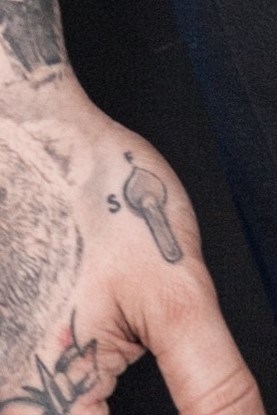 Another black and gray portrait piece, Malone has St. Jude tattooed on his left forearm, facing forward. While he hasn’t directly commented on the significance of this piece, St Jude is the patron saint of lost causes, which most likely informs Malone’s choice for this specific tattoo. 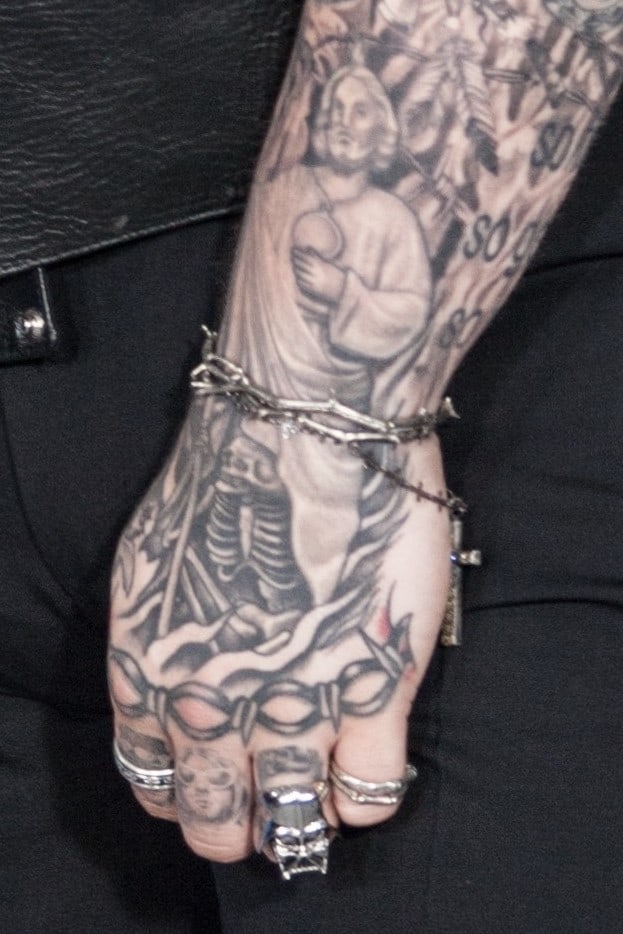 On his left arm Post Malone has one of his few full color tattoos, a skull piece done in red, white and blue. It has a lot of Texas about it with the large negative space star image at the center of the forehead, and red/white halving of the rest of the skull. 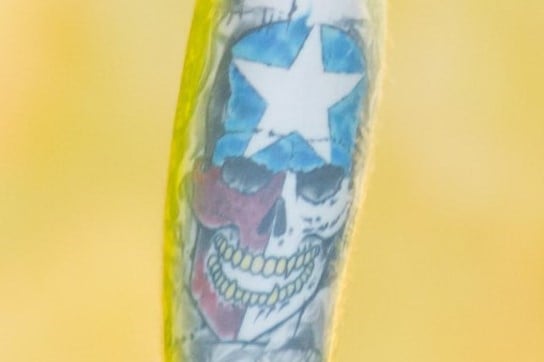 Post Malone has a few different skull tattoos stashed across his body – but his most visible is the black and gray one nestling in his throat that features the skull of a bovine, replete with horns tucked under his chin, and empty eye sockets. 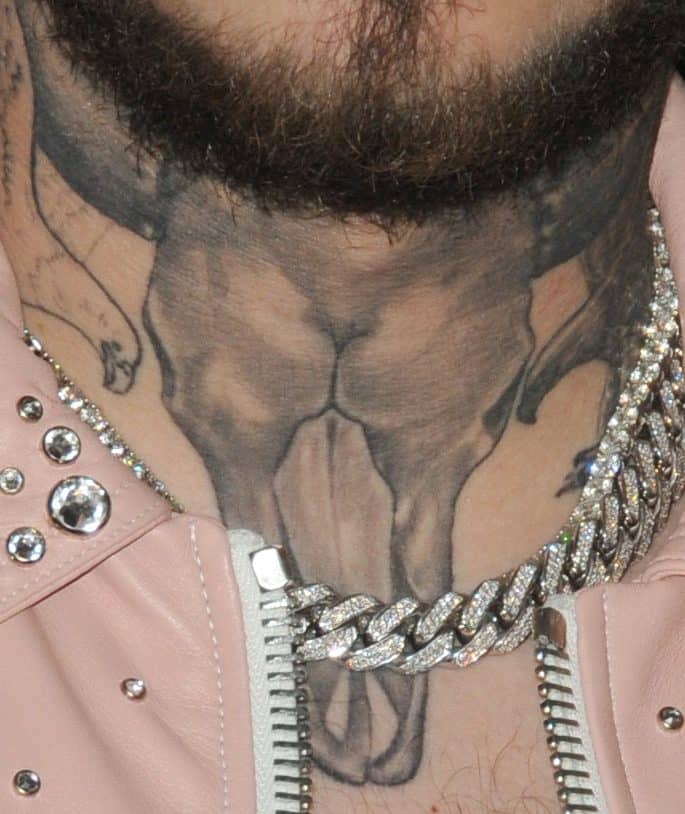 One of Post’s older pieces of body art is a playboy bunny tattoo on his left forearm that’s now almost obscured by newer work.

Located on the right side of his chest, Malone has a black and gray portrait of a decomposing Jesus. One of his larger tattoos, Malone has never spoken to the significance of this intriguing and unique piece.

While we may not know the significance for each item in rapper Post Malone’s tattoo catalogue, he embodies one of the greatest parts of getting ink: doing it for yourself. Even though the whole world sees when he gets new designs, there is no doubt that the only person Malone is getting tattooed for is Malone. 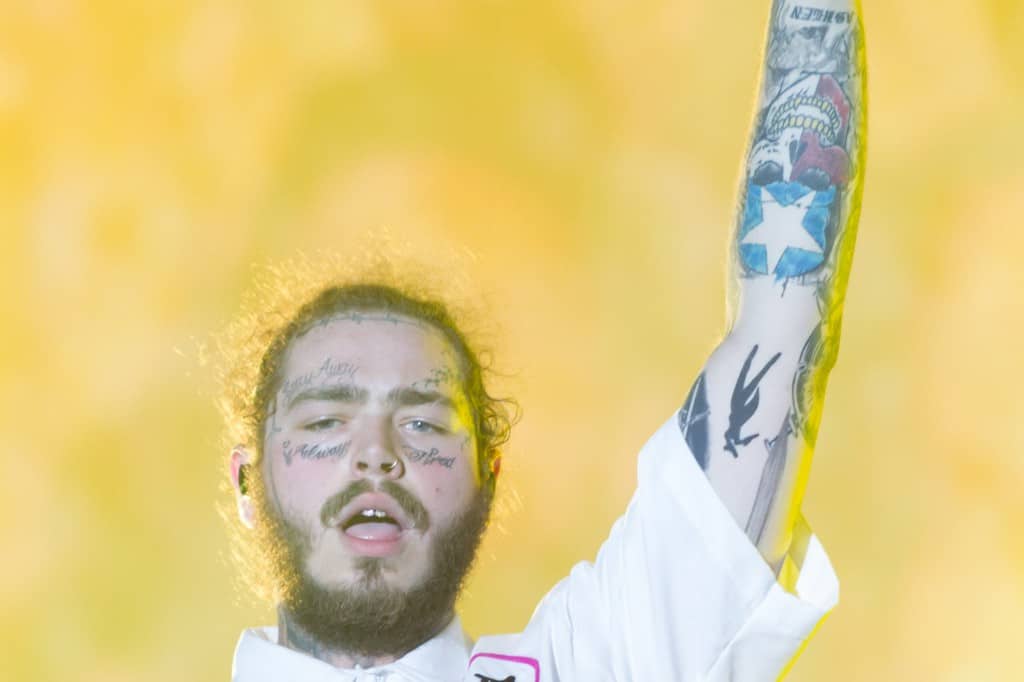