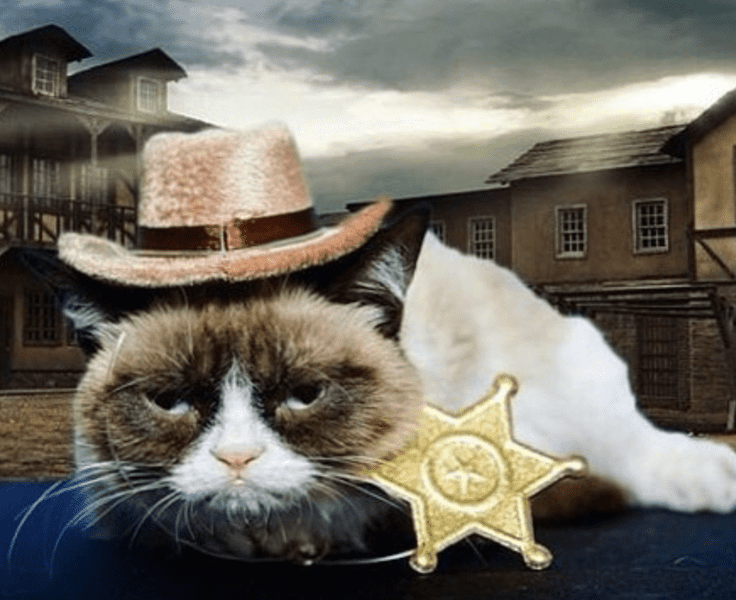 Grumpy Cat became an internet sensation in 2012. The cat, real name Tardar Sauce, had a permanently grumpy facial expression, hence the Grumpy Cat moniker. This was caused by an underbite and feline dwarfism, giving the cat its fed-up look. Grumpy Cat became famous when her owner’s brother, Bryan Bundesen, posted a photo of her on the social media site Reddit on September 22, 2012. The image blew up and Grumpy Cat was everywhere. Grumpy Cat memes littered the internet while television shows reached out to get the cat on their shows.

She became so big she released two books (Grumpy Cat: A Grumpy Book, The Grumpy Guide to Life: Observations by Grumpy Cat) a comic book (The Misadventures of Grumpy Cat and Pokey), and even a video game, Grumpy Cat: Unimpressed. Grumpy Cat appeared in advertising campaigns for Friskies and General Mills’ Honey Nut Cheerios and released a stack of merch, from mugs with her face on them to calendars.

But she never let the success get to her head, with owner Tabatha Bundesen making sure she stayed grounded. With almost 8 million total likes on Facebook, 2.6 million followers on Instagram, 1.5 million followers on Twitter, and 277,000 subscribers on YouTube, it’s safe to say Grumpy Cat is a cultural phenomenon.

Sadly, Grumpy Cat passed away in 2019 at the age of seven. Although gone she will never be forgotten and lives on thanks to the plethora of memes found on the internet. In celebration of the funny feline, we have collected some of the best Grumpy Cat memes for you to enjoy below. RIP Grumpy Cat. 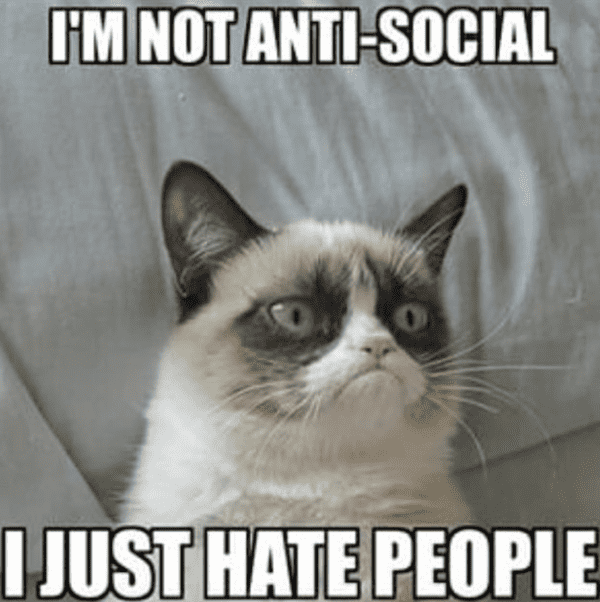 The perfect meme that sums up how many of us feel. Grumpy Cat is actually super friendly and fun to be around, she just doesn’t like anyone else, especially humans. Can’t blame her really.

2. So Many Reasons To Be Grumpy 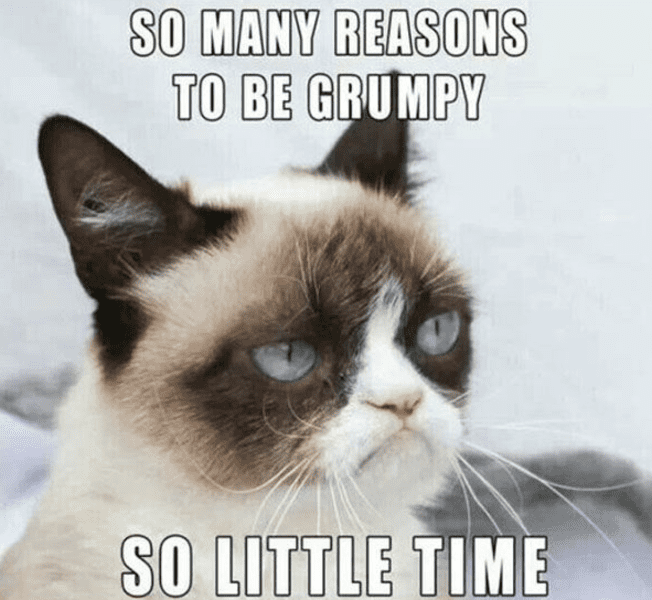 It’s hard not to agree with this meme. There are so many reasons to be grumpy these days, but hopefully looking at this meme will give you a laugh. 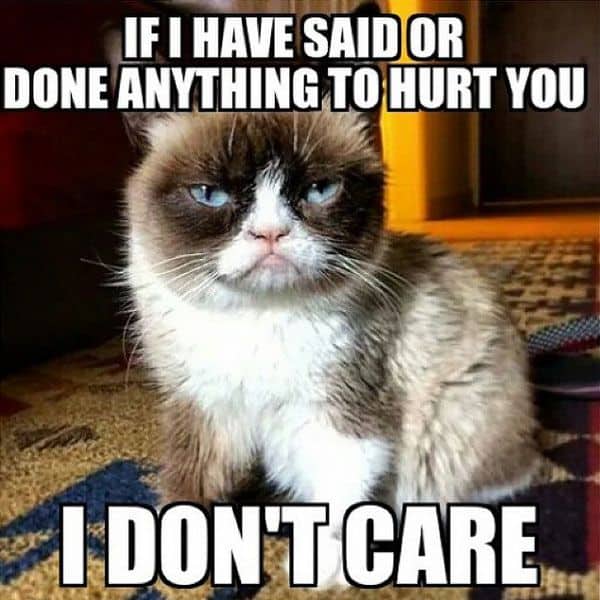 This is a great Grumpy Cat meme to send to someone when you just don’t care. Classic Grumpy Cat. This meme uses her non-plussed facial expression to remind everyone she had fun once too. But not anymore. Hard to disagree with this meme. Nobody, including Grumpy Cat, likes Mondays. 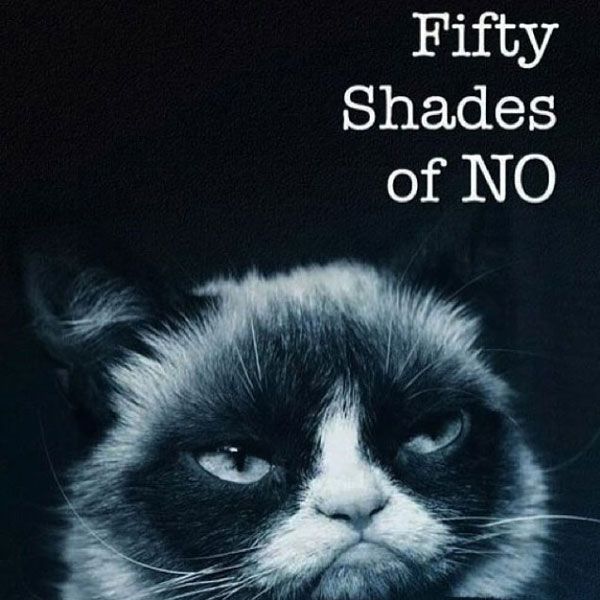 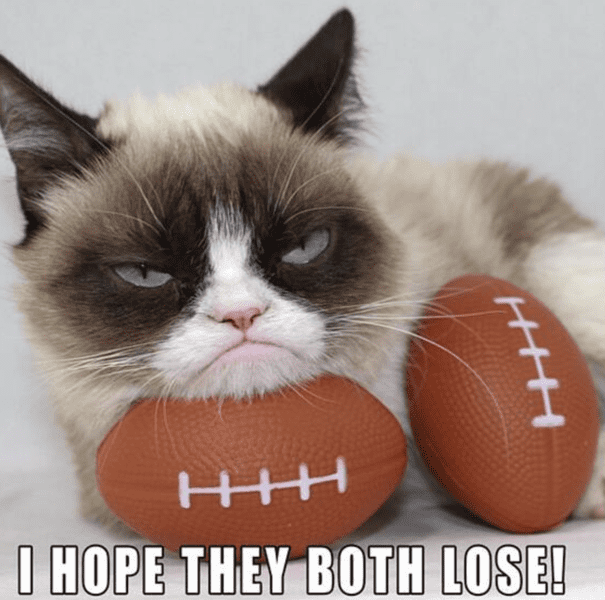 When you really don’t care who wins, just as long as your multi comes off.

9. I Don’t Wanna Know What Love Is 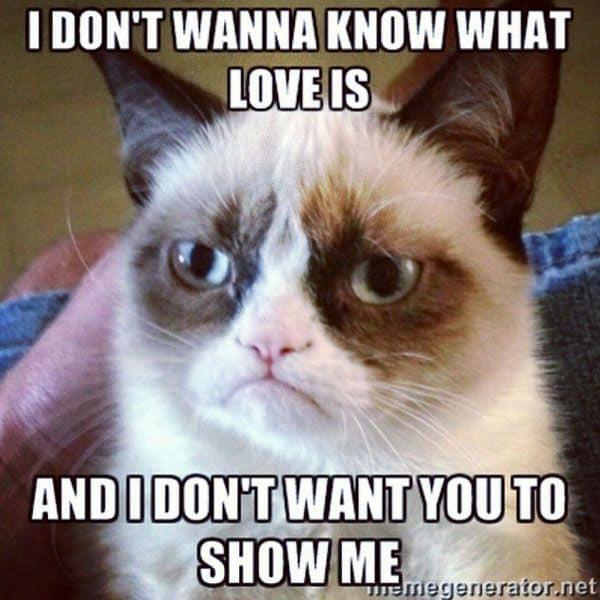 Taking the classic Foreigner song and turning it into a Grumpy Cat meme is genius. She doesn’t know what love is and really doesn’t care either. 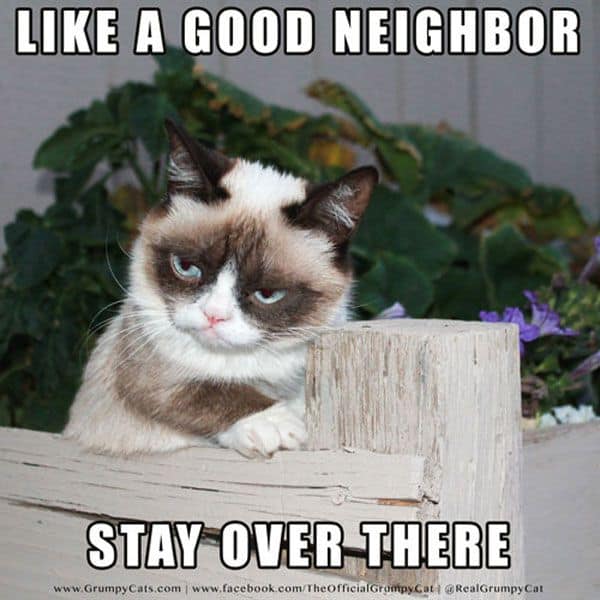 When you like your neighbors but don’t want them anywhere near you so they don’t try to chat with you. This meme speaks the truth. 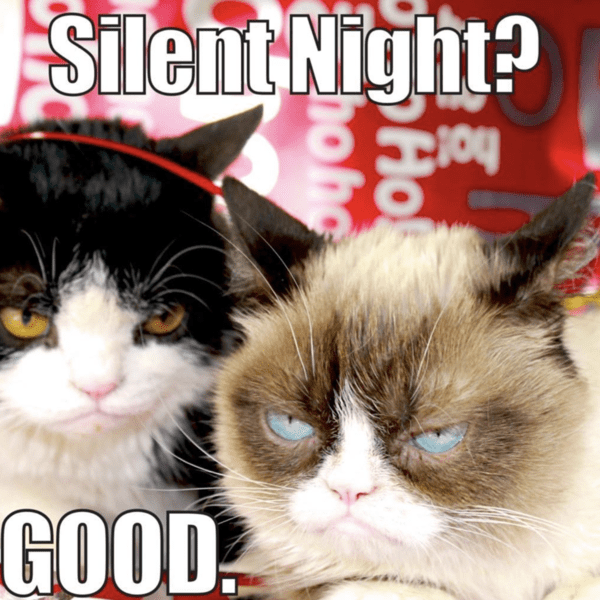 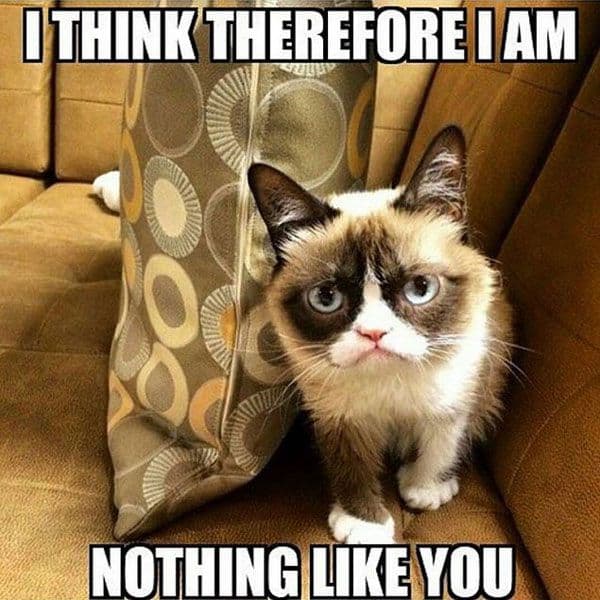 Grumpy Cat is certainly not like any other cat, as this meme attests.

See more about - 20 Of The Funniest Betty White Memes 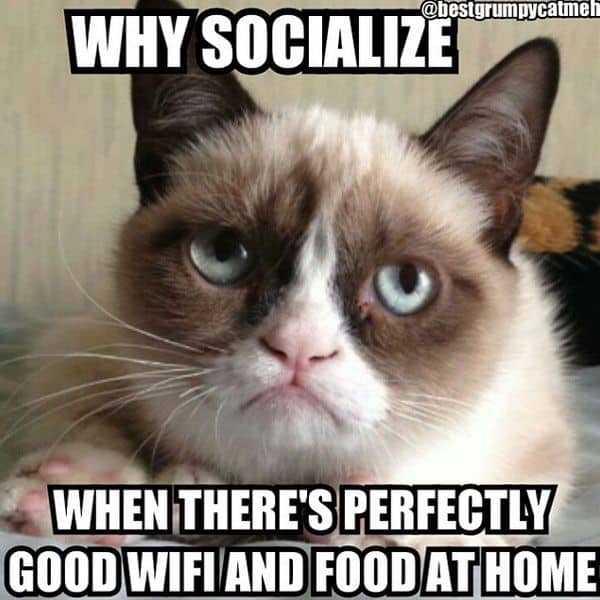 Similar to the first meme on this list, this entry asks the question, “why socialize?” Especially when there is Wi-Fi and food at home.

14. How Could You Be So Heartless? 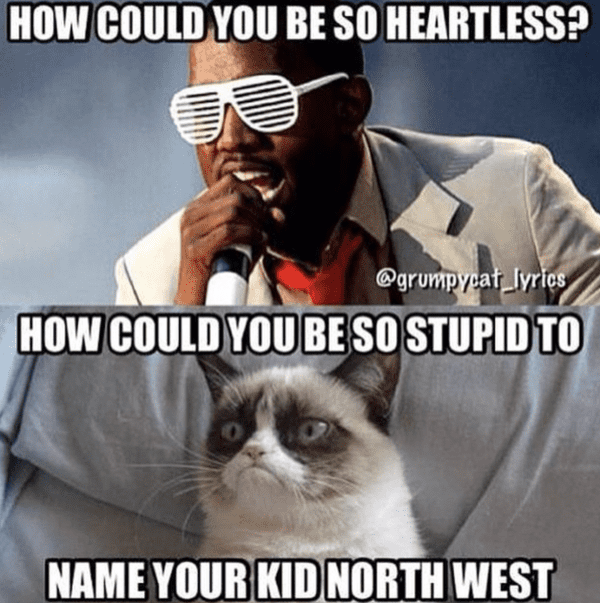 Nobody is safe from the wrath of Grumpy Cat, not even Kanye West. To be fair, North West is an interesting choice for a name.

15. Your Gift Is in the Litter Box 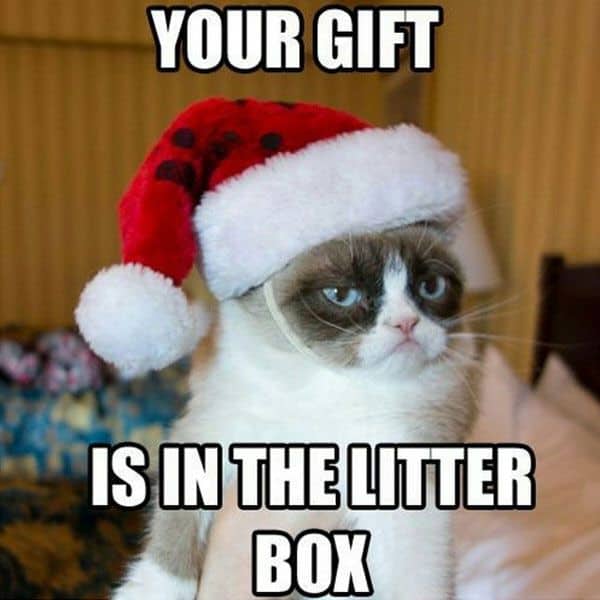 Another Christmas-themed Grumpy Cat meme, this one shows the softer side of the cat, who is more than happy to give her owners a gift. They just have to sift through her litter box to find it. 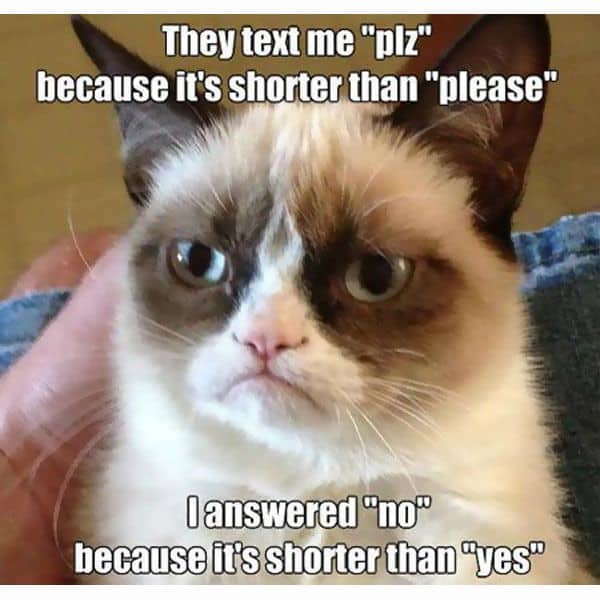 It’s hard to argue with the logic shown by Grumpy Cat in this meme. Yes is shorter than no. 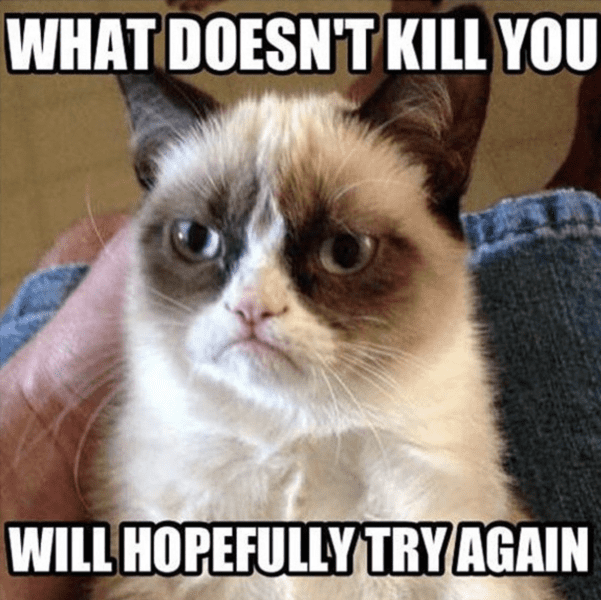 Feel the burn. Grumpy Cat takes no prisoners and this is another great internet meme from the influential cat. 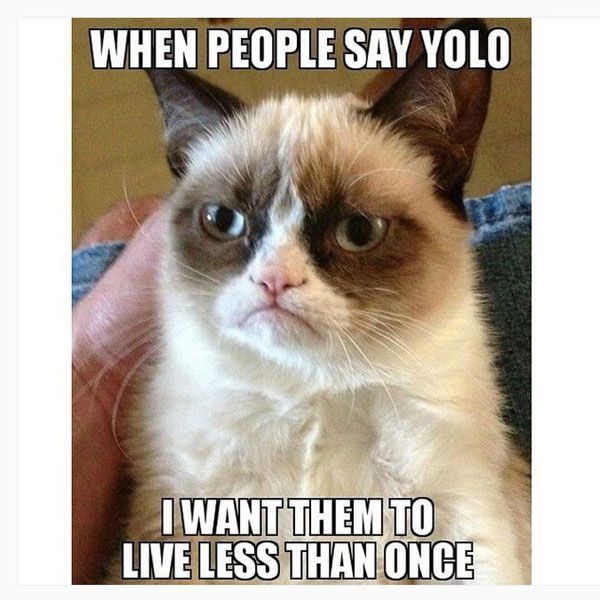 Grumpy Cat isn’t here for any modern slang, She also doesn’t want you living more than one life. How mean. 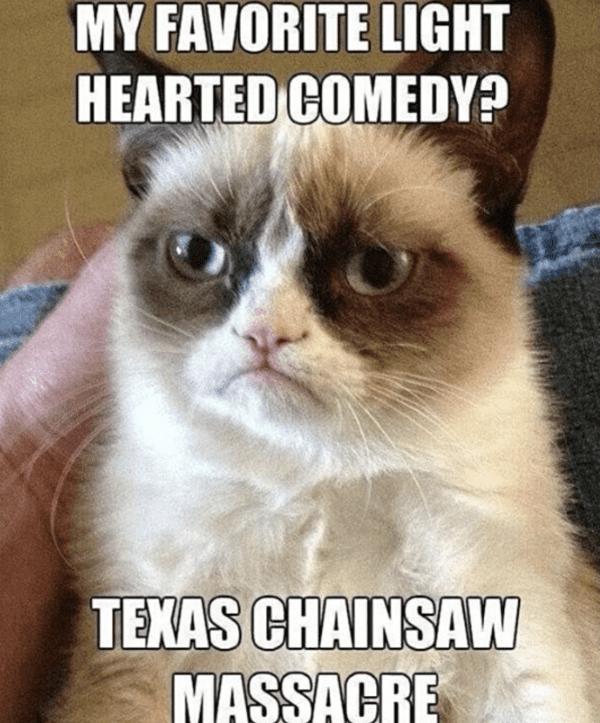 What Grumpy Cat enjoys as a comedy movie is totally different from most people. The Texas Chainsaw Massacre anyone? 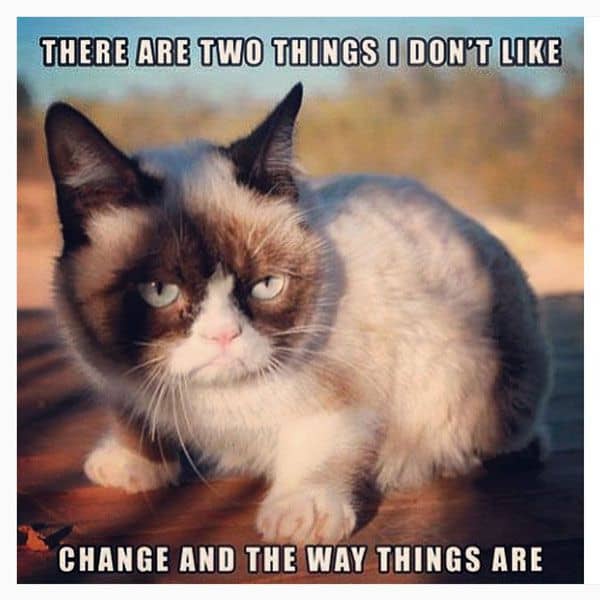 Not a lot of options left for Grumpy Cat if she doesn’t like change or the way things are. 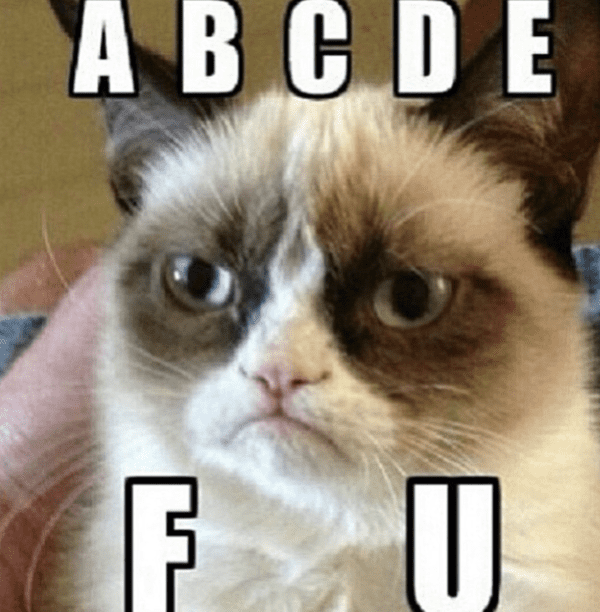 Grumpy Cat knows her ABCs, with her favorite letters being F and U. 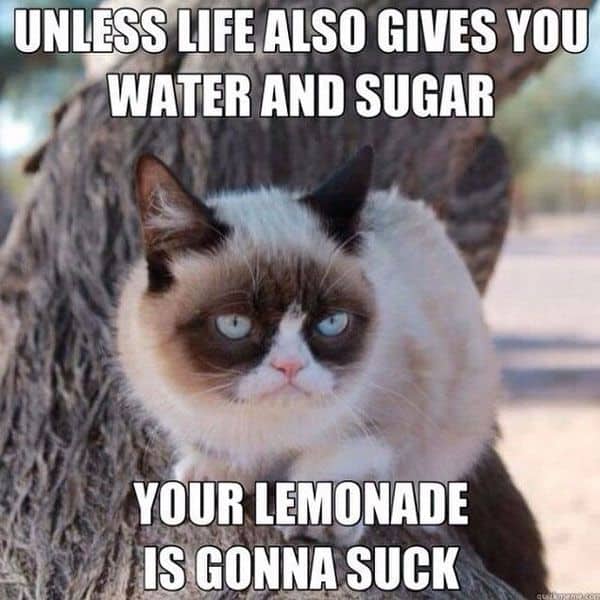 Fair point to be honest. Drinking lemon juice without any sweetener isn’t going to taste good. 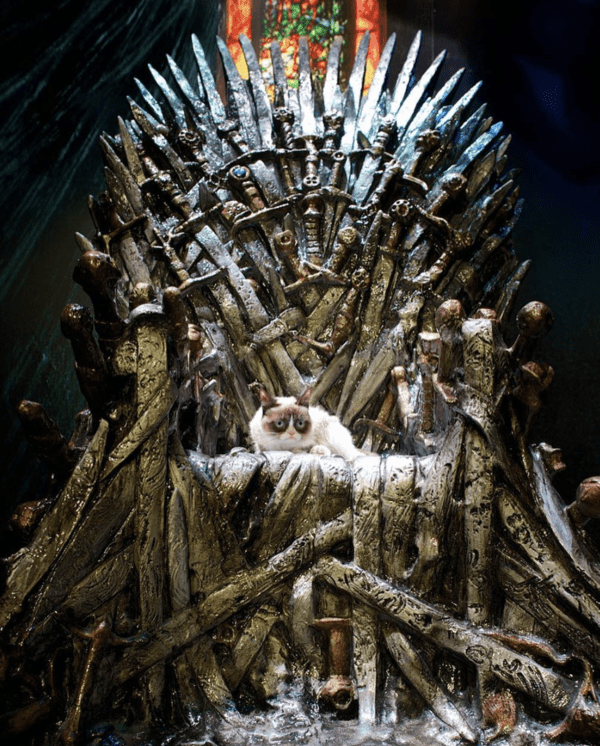 The true heir to the Iron Throne. 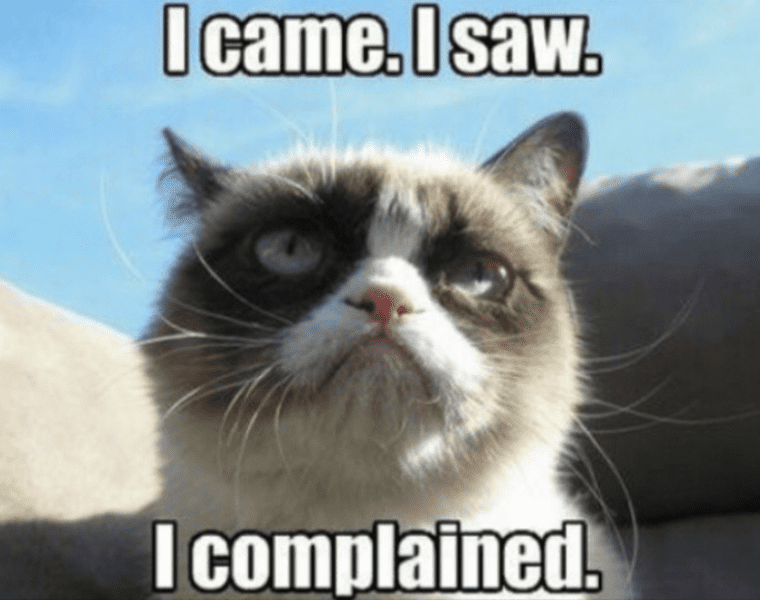 This a funny take on the classic phrase; “I came, I saw, I conquered.” Grumpy Cat loves to complain.

There’s a new sheriff in town and her name is Grumpy Cat.