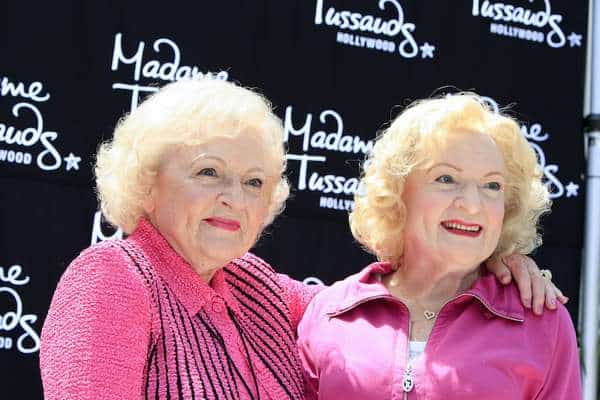 20 of the Funniest Betty White Memes

Betty White was a national treasure. The actress and comedian had been a mainstay in popular culture for more than 80 years. After getting her start in the world of radio, White transitioned to television. This is where her star really shone, hosting numerous hit game shows and appearing on many talk shows and serials. The ‘First Lady of Television’ then found another level of fame with her appearances on The Mary Tyler Moore Show in the 70s and comedy hit The Golden Girls in the 80s/90s. She also appeared in many films, often as herself, and found a new youthful audience with the 00s sitcom Hot in Cleveland. Appearing on shows such as Saturday Night Live and popping up in Snickers commercials kept White in the spotlight. This resulted in White being the brunt of many jokes, including some hilarious Betty White memes.

Never afraid to laugh at herself, White embraced her resurgence as a comedy icon in her later years. While thought of as a conservative elderly lady, White would often play up to this stereotype. She became known for playing risque characters and leaning into her sexuality. All of this helped cement her legend in Hollywood.

Unfortunately White passed away in her sleep at the age of 99 in 2021. She lived one hell of a life that provided lots of laughs, especially for the younger generation in the form of memes. To celebrate her life, here are 20 of the funniest Betty White memes on the internet. 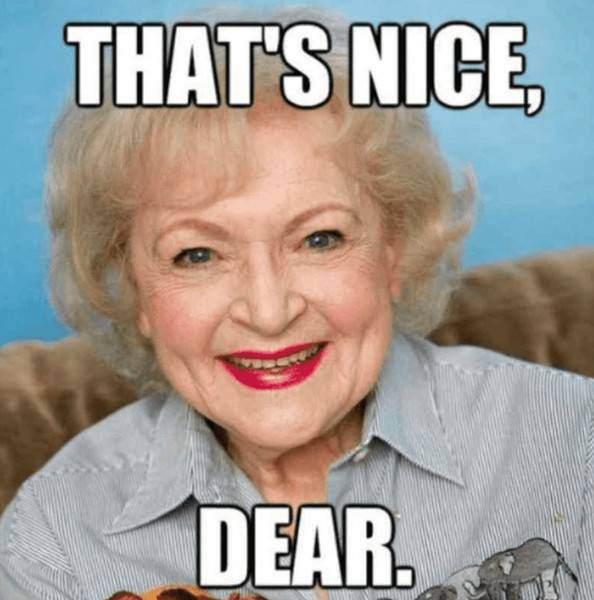 This is a great meme to send to anyone when you want a sarcastic reply about something they have done. Betty White’s sweet demeanor makes it seem so genuine, but we all know you don’t really care.

2. The Most Notorious Gangster That Ever Lived 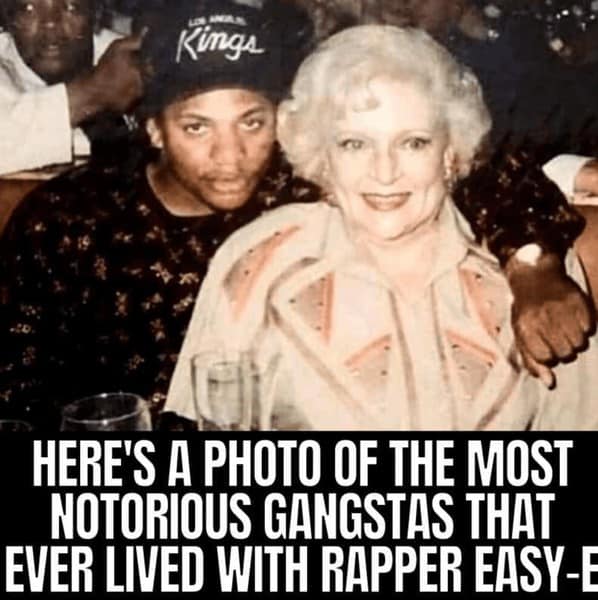 This funny meme shows Betty White hanging with Eazy-E and declaring her the gangster, playing into the stereotype of her being such a nice lady.

3. The Greatest Thing Since Betty White 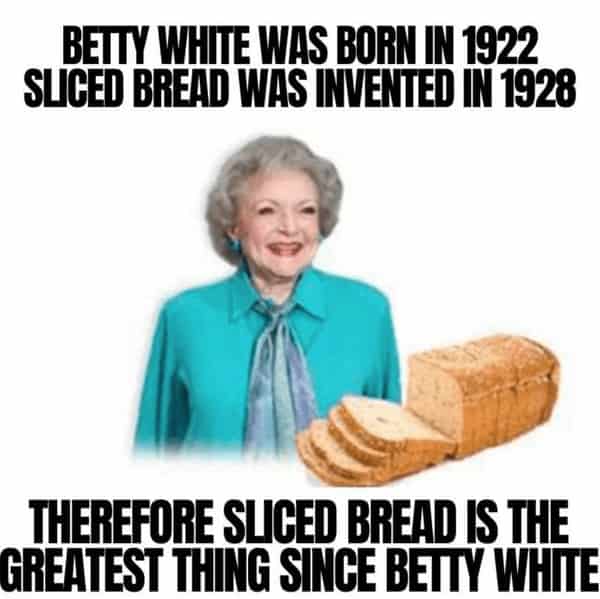 Ok, so bread has been around a lot longer than Betty White, but not sliced bread. As this meme points out, White was around before, so she deserves to have the phrase changed to suit her greatness. 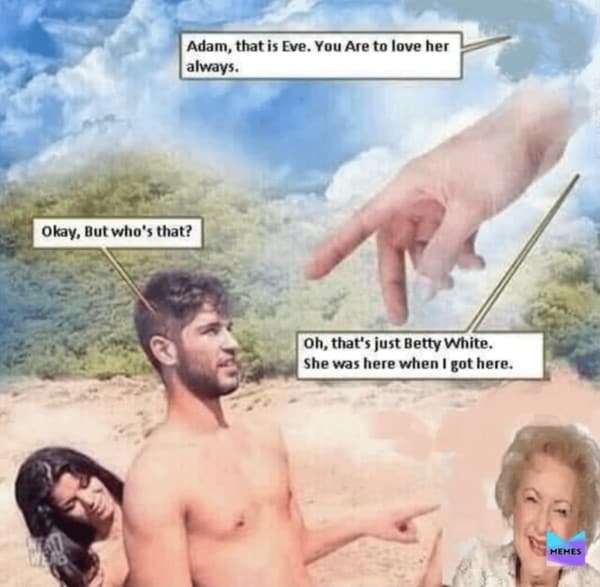 Betty White’s longevity in the entertainment industry meant she was often the butt of ageist jokes. This one implies she was that old she had been around since the dawn of time. 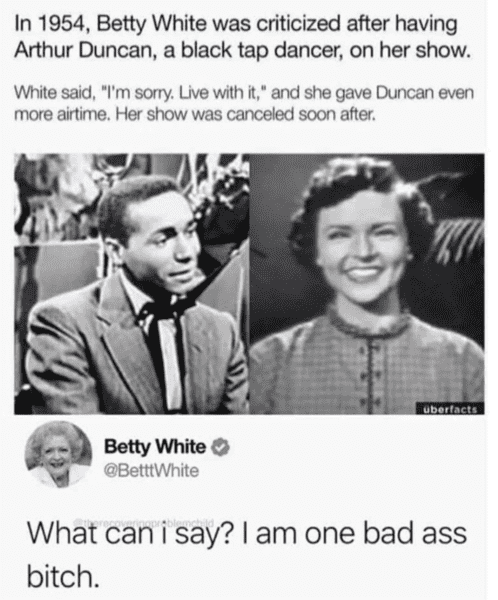 While the tweet isn’t real, the story of Betty White fighting for the rights of African Americans is true. She was a big supporter of racial equality and wouldn’t back down from her beliefs, even when it caused the axing of her show. A true icon. 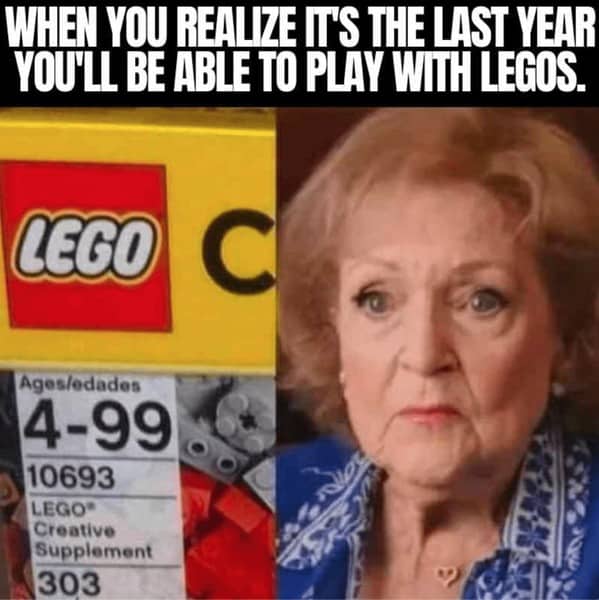 Another crack at Betty White’s age, this one shows her claiming she rode a dinosaur. Not sure these animals were around during White’s life but it makes for a funny meme.

8. The Older the Better 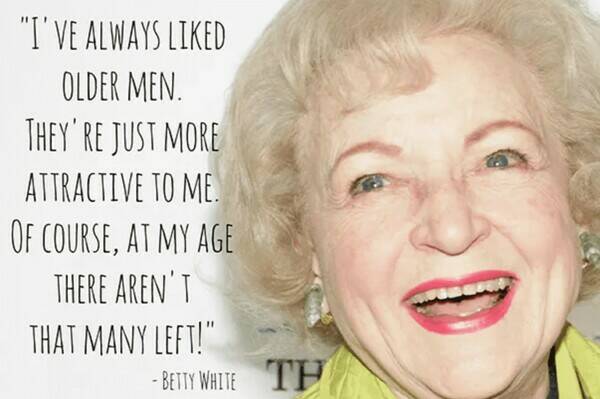 Betty White discusses her love of older men while also making a joke about her age. A great quote from The Golden Girls star. 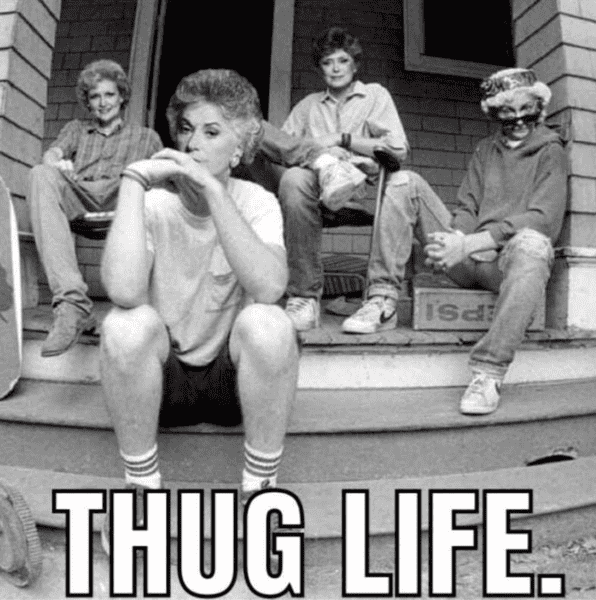 Betty White and her Golden Girls co-stars Bea Arthur, Rue Mcclanahan, and Estelle Getty living that thug life. You wouldn’t want to meet these four ladies in a dark alley.

This one isn’t funny, but a gentle reminder that you are never too old to chase your dreams. Wise words of advice. 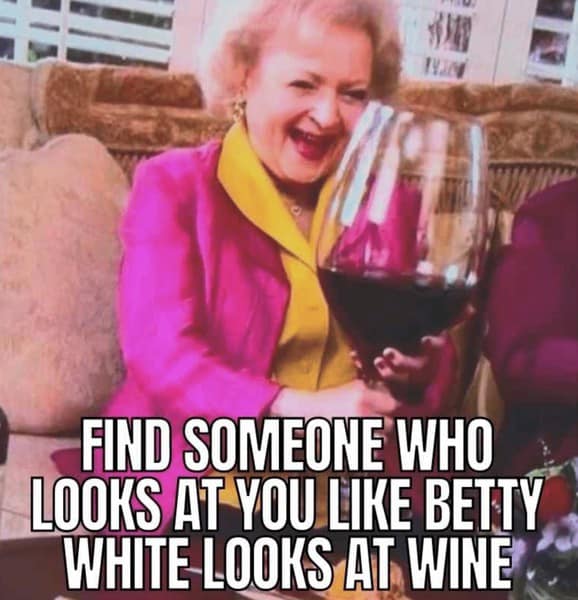 12. Her Relationship With Ryan Reynolds 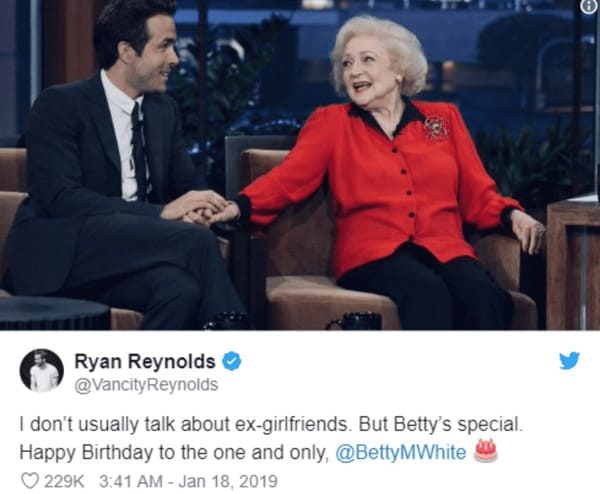 This might not be a regular meme, but it does illustrate the sweet and hilarious relationship between Betty White and Ryan Reynolds. The Canadian actor was always referring to White as his former girlfriend, as seen in the tweet above. White was always willing to play along too, telling People magazine, “I’ve heard Ryan can’t get over his thing for me. But Robert Redford is the one.” 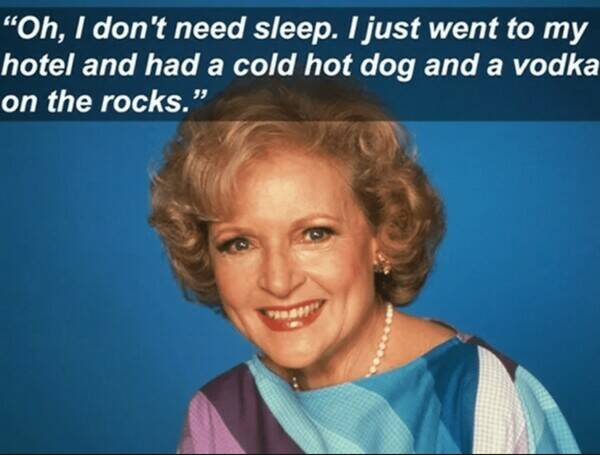 Here is another classic quote from the legend that is Betty White. Hot dogs and vodka are all you need. 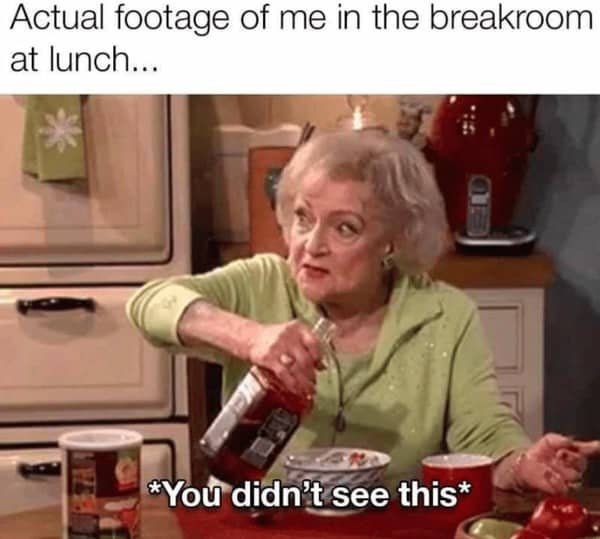 When you get caught and want to make sure your co-worker saw nothing. 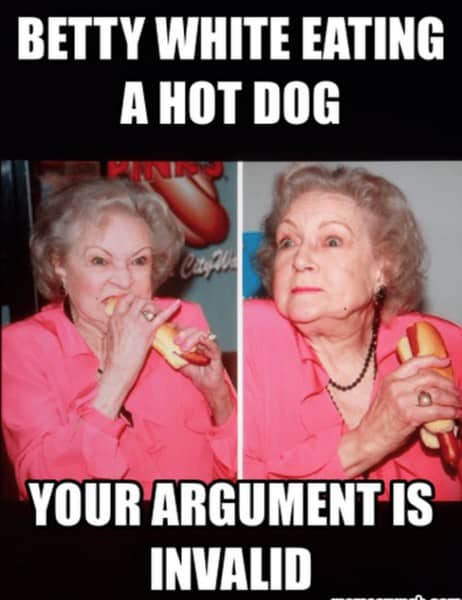 Betty White was a known lover of hot dogs. Along with drinking vodka, she said eating hot dogs is why she lived so long. This image of her chowing down on one is the perfect way to end any argument. Who can compete with White eating a hotdog? 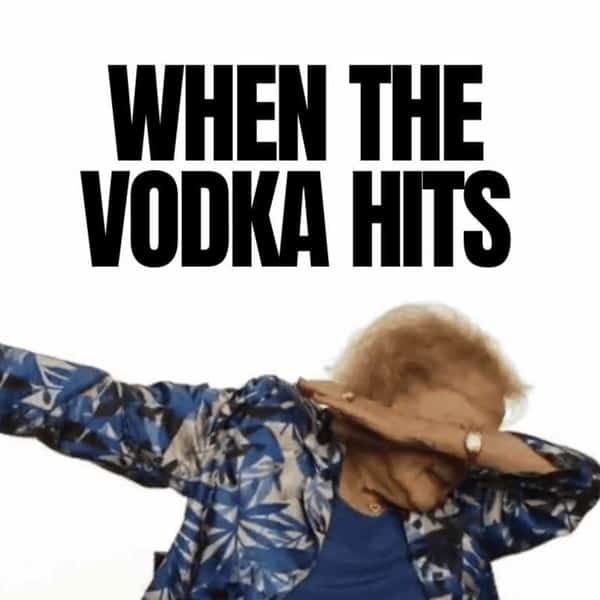 Who doesn’t have a friend like this? Has a couple of drinks and seems fine and then the next minute are dabbing all over the place. 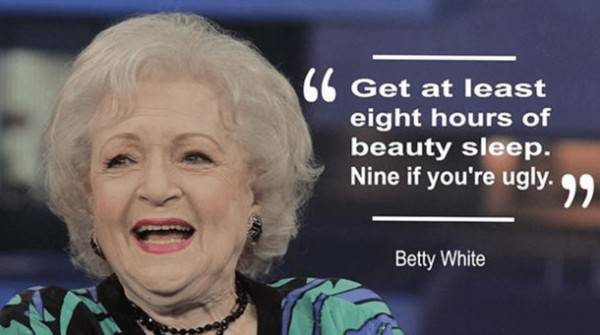 Here are some words of wisdom from Betty White. Sleep is important. Especially if you’re ugly. 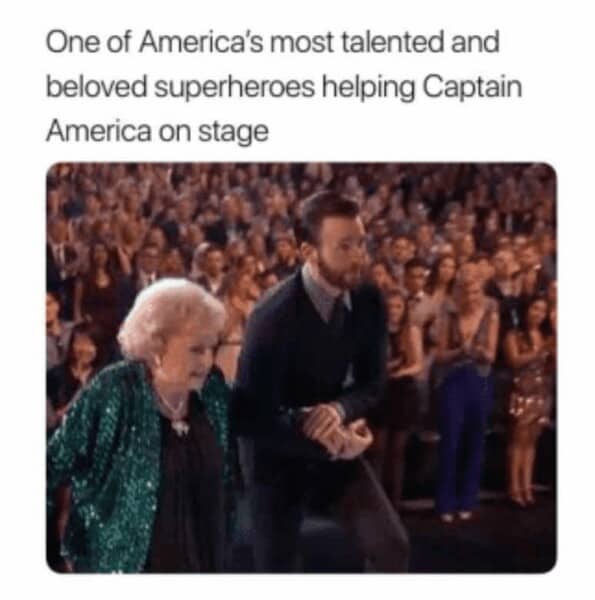 This one features Betty White and Captain America, Chris Evans, walking up to the stage during the People’s Choice Awards. While it looks like White is needing help, it’s actually Evans who is being escorted by the true Captain America.

19. The Only Person Chuck Norris Is Afraid Of 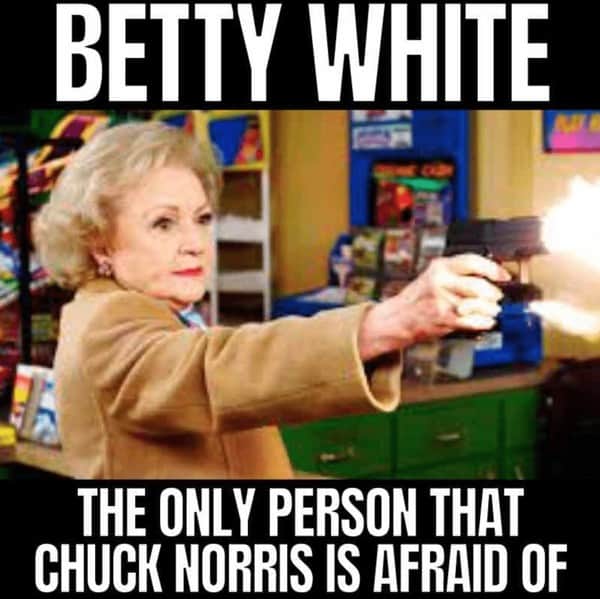 There were a lot of classic Chuck Norris memes that went around a few years back. These often focused on how everything was afraid of him. This meme turns that on it ahead by positioning Betty White as the one thing that scares Norris. We can’t blame him. 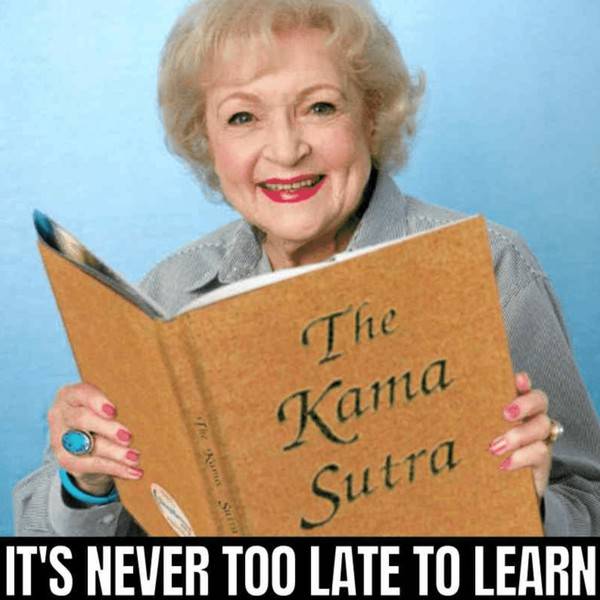 Playing into her racy side, Betty White brushes up on her sex game in this hilarious yet cheeky meme.