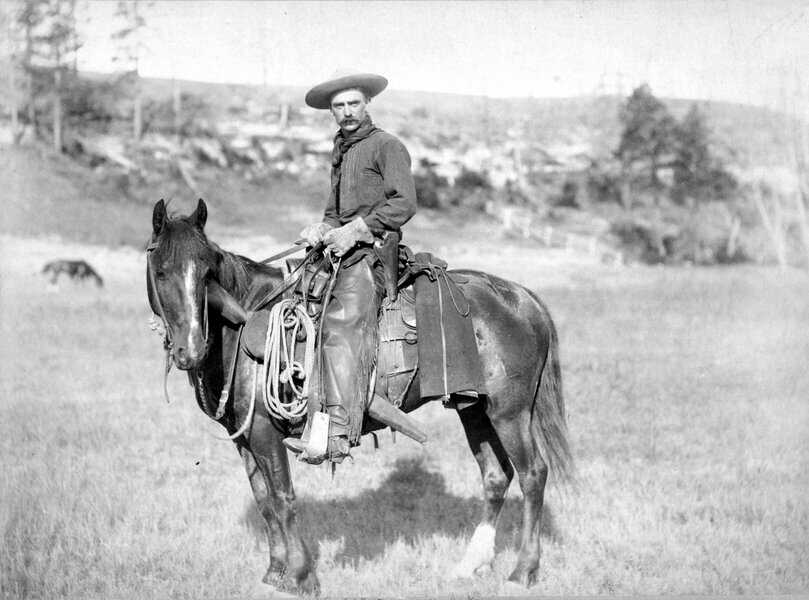 The Old West was an important time in America’s history. It’s the moment when people began their journey across America in search of new lands to settle. The Civil War had just ended and the country was trying to come together as one nation. Towns began to spring up as Europeans migrated to America and set up shop. It was during this defining period of growth that the Wild West became a cultural phenomenon. It was an era of cowboys, outlaws, prospectors, and pioneers, with the lawlessness of the Wild West slowly coming to an end in the late 1800s with the creation of the railroad. We know much of what happened during this time thanks to the authors who wrote down the exploits of the period and the photographers who took Old West photos detailing moments, events, and people of that time.

The American frontier has been mythologized by those who lived through it. The Old West photos from that time show us what legends like Wyatt Earp, Buffalo Bill, Jessie James, and Billy the Kid looked like, while also shedding light on the landscapes and towns where people lived.

The Old West photos below cover all this and more, highlighting how tough life really was back then. From Wild West shootouts and sprawling ranches to Native American Indians and the gold rush, these are 10 vintage Old West photos detailing what life was really like.

The cowboy is the archetypical image most people think of when they hear the words “Old West.” These hard-working individuals were hired by ranchers to help round up cattle and move them across the lands during the different seasons. They had a certain look with their boots, chaps, shirts, and cowboy hats. They enjoyed somewhat of a drifters lifestyle, riding from town to town looking for work, often spending their free time in saloons drinking and gambling.

This image is by American photographer John C. H. Grabill. Taken somewhere in Sturgis, Dakota Territory (now South Dakota), it shows a cowboy sitting on his horse in full regalia ready for a hard day’s work. 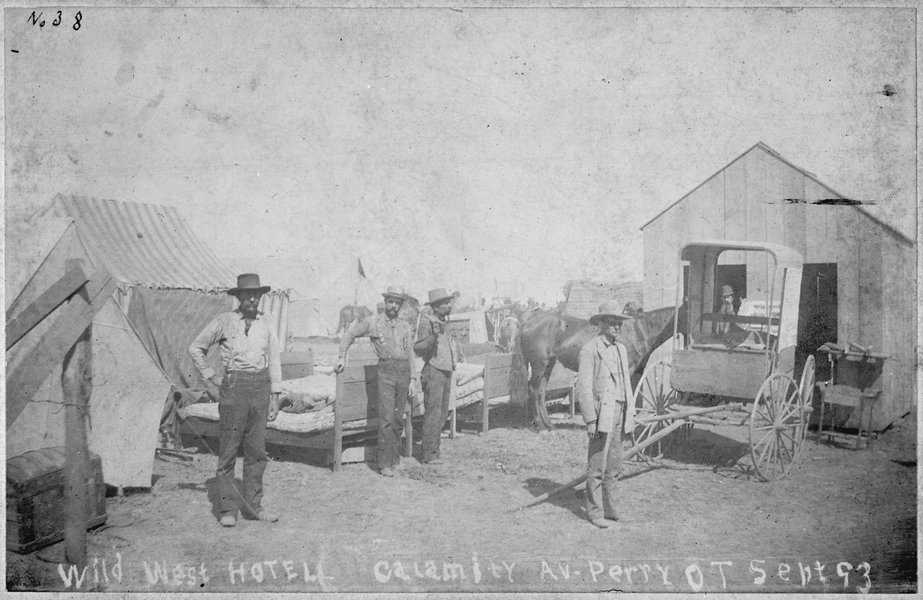 This image features several cowboys posing for a photograph. It is not known who took the photo or where it occurred, with the only details about the photo found in writing at the bottom. It reads; “Wild West Hotel, Calamity Av., Perry, 0. T., Sept. 93.” This could be a small settlement that is just beginning or perhaps a place where cowboys come after a hard day to relax with a beer. It does show the men dressed in familiar cowboy garb, with many also sporting healthy mustaches. 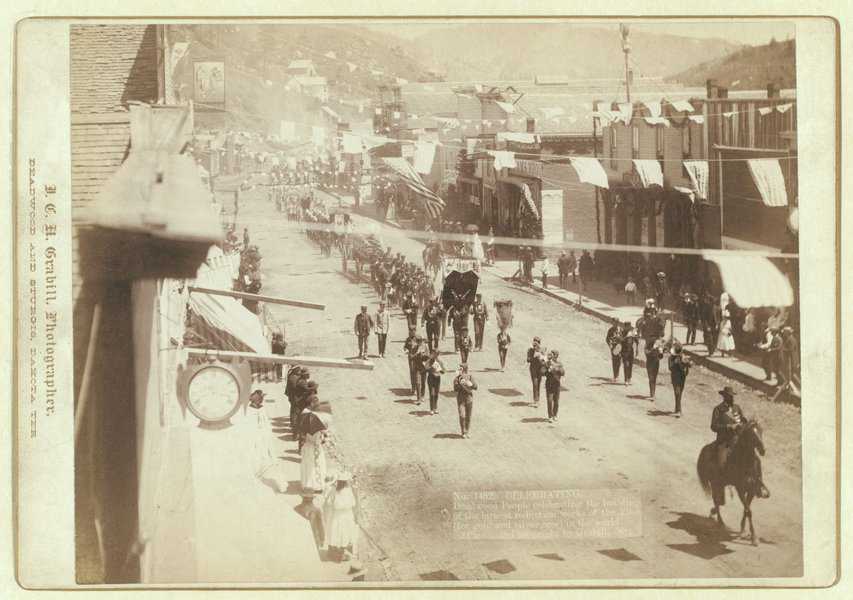 If you have seen the incredible television series Deadwood, then you are aware of this famous town from the American West. The fledging town in South Dakota became famous after gold was found nearby, bringing all sorts of weird and wonderful characters to the area. Along with prospectors, Chinese immigrants, and families looking for a fresh start, many legendary Wild West figures also arrived, including Wyatt Earp, Wild Bill Hickok, and Calamity Jane.

This image, taken in 1888, shows the people of Deadwood “celebrating the building of the largest reduction works of the kind (for gold and silver ores) in the world.” It’s another of many Old West photos that give a glimpse into what life was like back then. 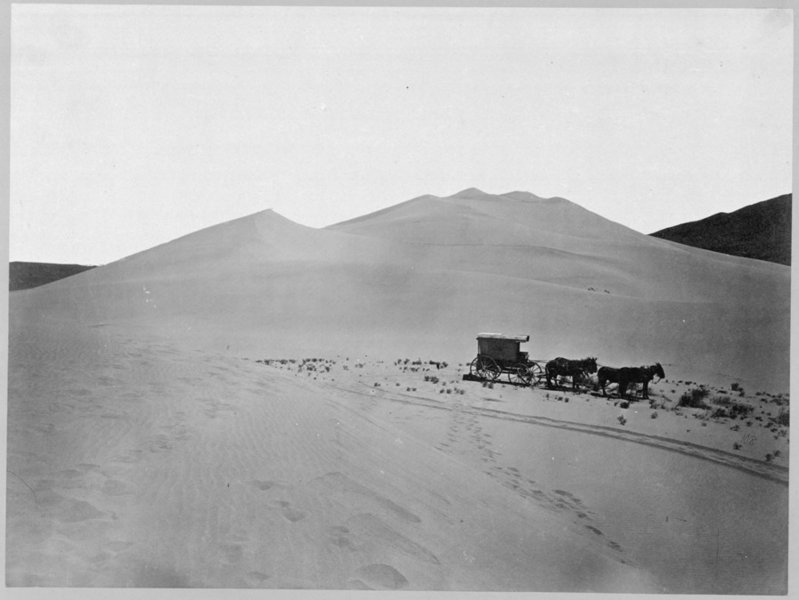 This old time photo shows a wagon heading across the Carson Desert in Nevada in 1867. As you can see, the land is bare and there wasn’t much in the way of scenery. People from the American frontier would often be faced with landscapes like this as they traveled from town to town. The Wild West could be a desolate place, with photographer Timothy H OSullivan really capturing the isolation of traveling during that time. 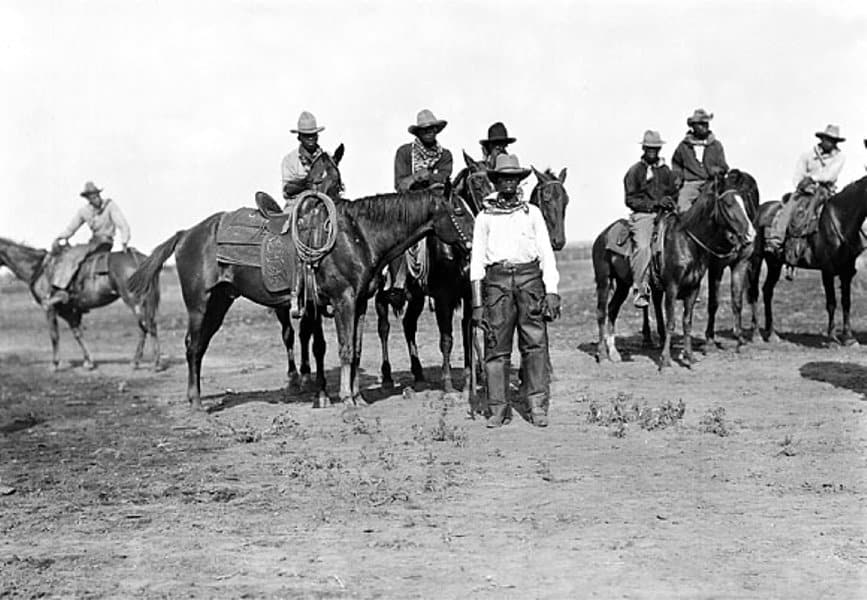 While they aren’t talked about as much as they should be, African American cowboys were a big part of the United States during the Old West. After the end of the American Civil War, there were many African Americans who were now free slaves. They wanted to make a better life for themselves and became cowboys.

Some, such as Nat Love and John Ware became icons of the time who had great success and were respected by other cowboys for their exploits. There are many Old West photos that show these hard-working men in action. 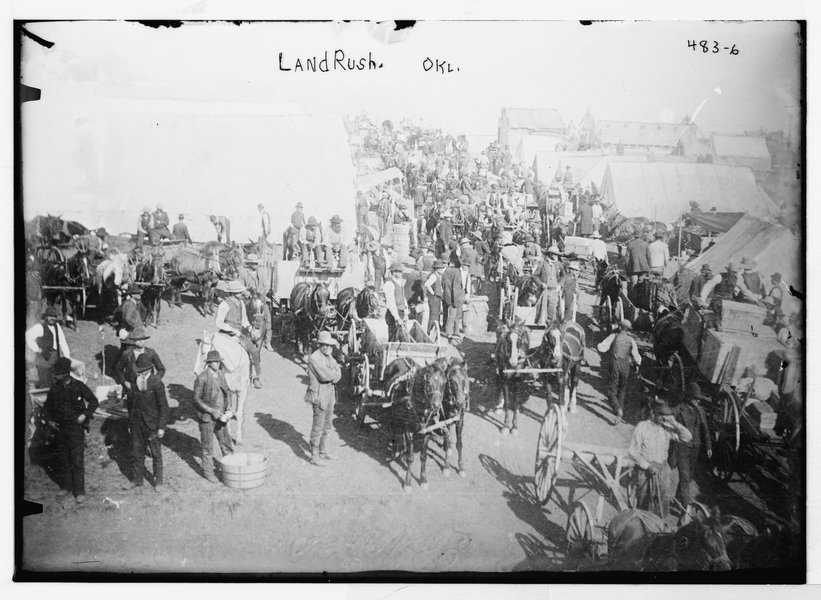 The Oklahoma Land Rush of 1889 was an initiative by the United States government where settlers could claim any piece of land over a two million-acre area now known as Oklahoma. It’s reported that 50,000 people turned up to stake their claim, with the land rush kicking off at high noon on April 22, 1889. Once people claimed their plot, they had to live there and improve the land as part of the deal.

While great for people looking to start a new life in the Old West, as was often the case during this period, the Native Americans were impacted. The land was originally left for them as part of the Indian Treaty, but as expansion happened and the government wanted more land, the Native Indians were relocated elsewhere. 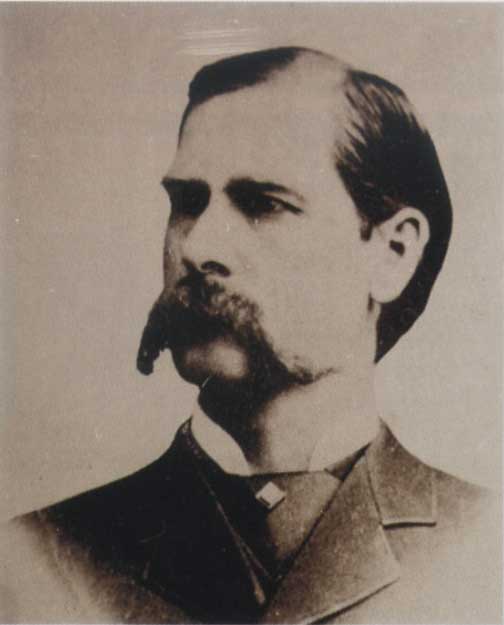 One of the most iconic people to live during the Old Wild West was the great Wyatt Earp. A lawman, gambler, and all-around mischief-maker, Earp is best known for the shootout at the O K Coral. Following his brother James to the town of Tombstone in Arizona, he became a sheriff and clashed with a group of outlaws known as the Cowboys.

Wyatt and his brothers (Morgan and Virgil had also come to Tombstone) got in several skirmishes with the gang, culminating in the shootout at the O K Corral on October 26, 1981. Wyatt, his brothers, and close friend Doc Holiday killed three Cowboys during this incident.

But that wasn’t the end of things. The Cowboys were out for revenge, shooting Wyatt’s brother Virgil and maiming him while killing his other sibling Morgan. Earp was given permission from the government to form a posse and go after the Cowboys, hunting down the final members before he moved to San Francisco. This is where he spent the remainder of his life, involved in numerous pursuits, including mining for gold, becoming a boxing promoter, and owning a bar.

There is a lot of mystique surrounding Earp and his deeds. The documented history about him often blurs the line between fact and fiction, but there is no doubt he had a massive impact on that period of time. 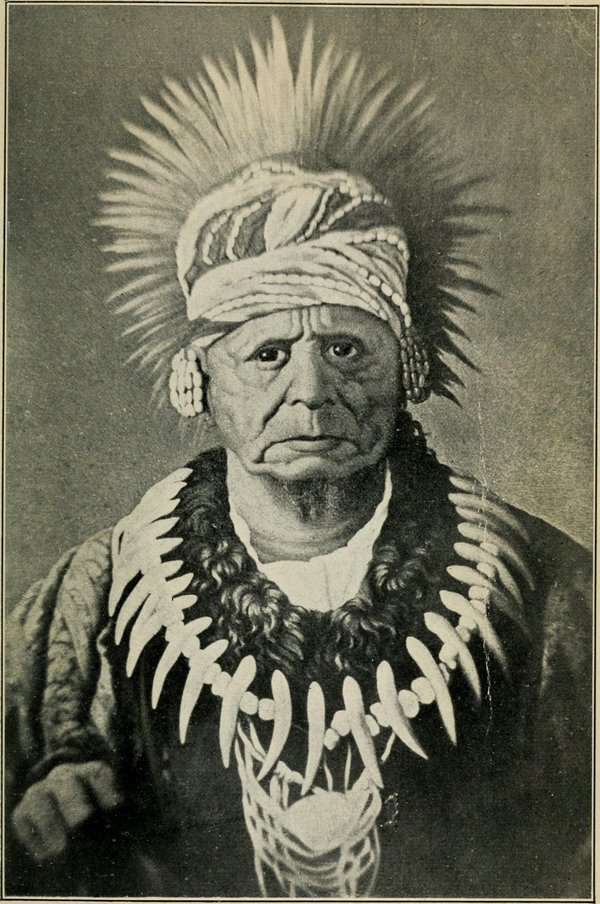 The leader of the Sauk tribe in central North America, Chief Keokuk is one of the most famous Native American tribesmen from the Old West. Unlike many of his people, Keokuk understood the white man was never going to stop taking their land, so he was always friendly to the government, often moving his tribe from land to land to accommodate the American settlers who quickly began to take over.

He was said to have been a fine warrior and an even better politician, often able to convince other tribes not to go to war with the Americans and make deals for their land. 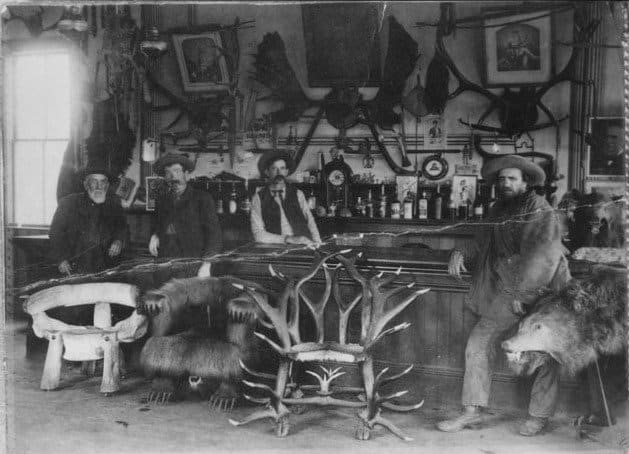 Here is a photo of a group of cowboys and settlers relaxing in the Table Bluff Hotel and Saloon. The men are all dressed in the traditional Wild West costume of that time, complete with cowboy hats. The bar itself is decorated with deer and moose antlers and furniture that appears to be made from animals. 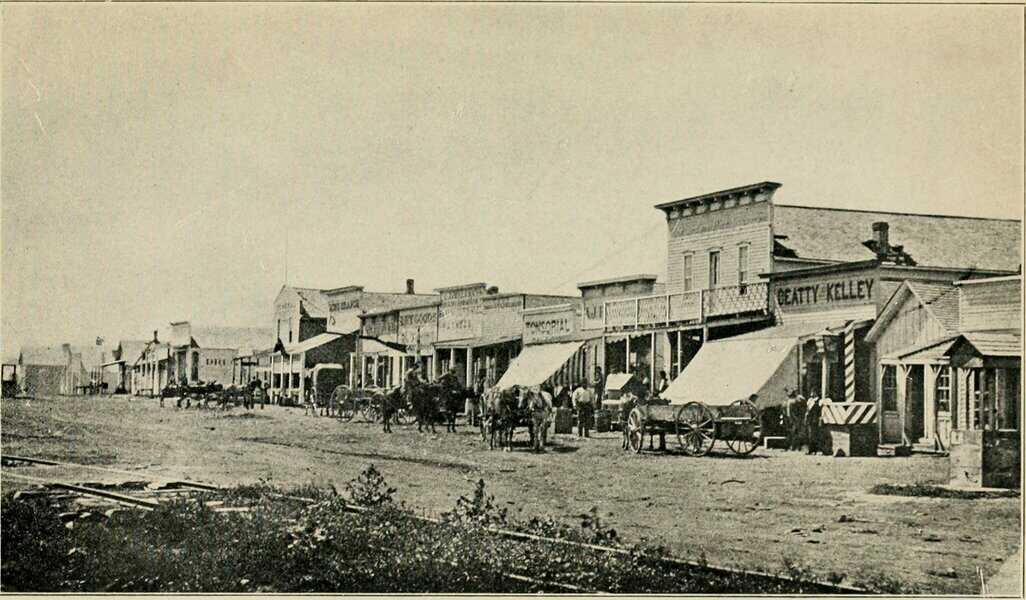 Along with Deadwood and Tombstone, the most infamous town of the Wild West was Dodge City in Kansas. One of the frontier towns of the American West, Dodge City became a boomtown after cattle trails were diverted through the outpost. It had countless saloons, gambling halls, and brothels and was frequented by many outlaws, including Billy the Kid, Doc Holiday, and Jessie James.

Although it attracted thousands of settlers looking for a better life, Dodge City was full of violence, with many shootouts occurring in the streets. Taken in 1878, during the height of the city’s popularity, Old West photos like this show the town in all its glory without a weapon in sight.

See more about - 10 Photos Of People Before And After War