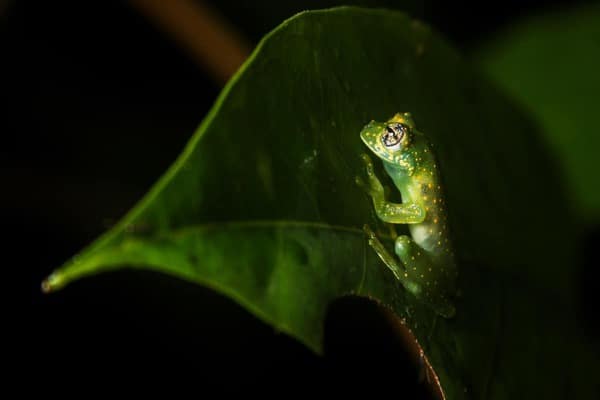 20 of the Weirdest Animals in the World

According to National Geographic, a study found there are some 8.7 million species on the planet. While we haven’t even discovered a quarter of these creatures, the ones we have range from domestic pets to some of the weirdest animals ever seen. While everyone knows what a lion or a shark looks like, have you ever seen a sparklemuffin? Or how about the infamous Tasmanian devil? These weird animals are found in all parts of the globe but are rarely seen by humans in our everyday lives.

To shed some light on these bizarre creatures, we have chosen to highlight some of the weirdest animals going around. These species can be found on land, in the water, or in the air. Some are small animals you wouldn’t even notice if you walked past them, while others are larger beasts that could do you a lot of damage. Read on to discover some of the most unusual animals on the planet. 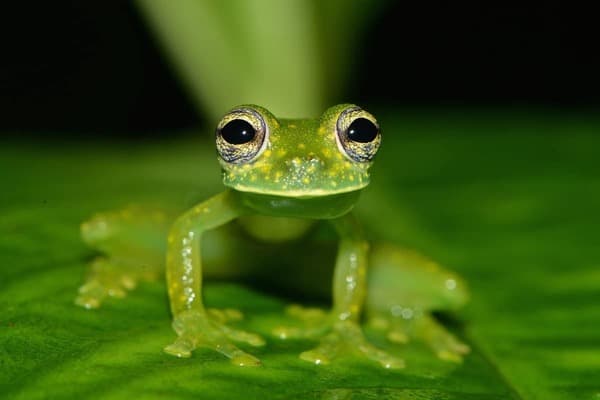 While most glass frogs are green in color, they can also be transparent and translucent. This is where the amphibian gets its name from. You can actually see the insides of the frog, which makes for remarkable viewing. Found around South America, the glass frog lives along rivers and streams. When threatened, it has the ability to change its skin color to match its surroundings 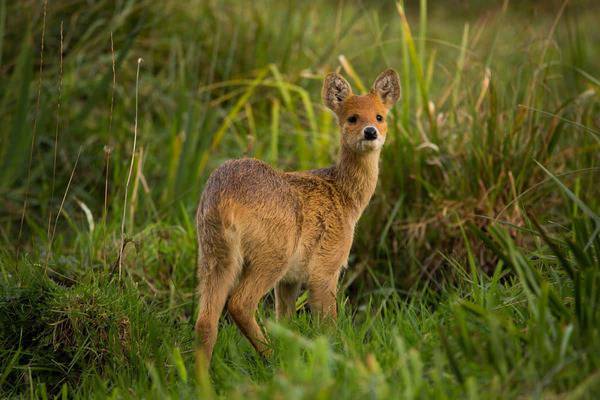 From a distance, the Chinese water deer looks like any other deer. Get closer and you will see why it is on this list. The Chinese water deer has developed two long canine teeth that stick out of its mouth. It looks like a vampire, which is why this species is often known as vampire deers. Despite the scary looking teeth, these deer don’t eat meat, preferring to graze on grass and other vegetation. 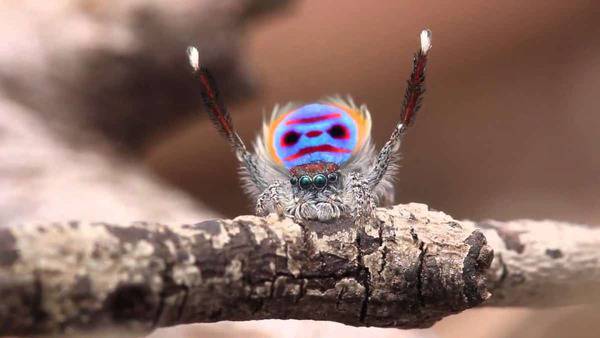 Officially known as Maratus jactatus, this species of spider is commonly referred to as a sparklemuffin. The name comes from University of California researcher Madeline Girard, who discovered the jumping spider in the woodland forests of Wondul National Park in 2015. Along with the name, this strange variation of the Australian peacock spider is just five millimeters in length. While the females have black bodies, it’s the colorful bodies of the males that make these spiders stand out. Vibrant and eye-catching, the spider’s bodies, along with a strange mating dance, help them find a female to procreate with. 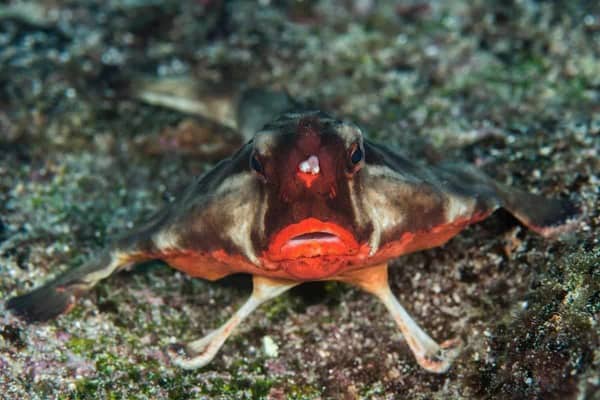 The red lipped batfish or Galapagos batfish is found off the coast of the Galapagos Islands. They are a closer relative of the rosy lipped batfish found off the Pacific coast of Costa Rica. These small fish are dull in color besides their bright red lips. Scientists believe the red lips are part of the batfish’s genetic makeup to differentiate from other batfish. They also believe the red lips could be part of their mating ritual. Whatever the case, this is one weird looking fish. 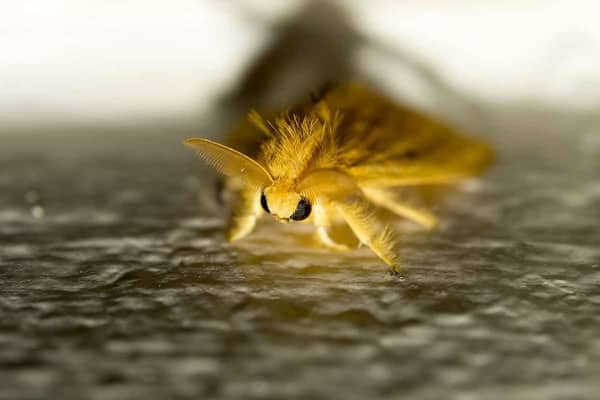 First photographed in 2009 by Kyrgyzstani zoologist Dr. Arthur Anke, the Venezuelan poodle moth is yet to be classified. Nobody has been able to capture one in the wild. It gets its name from the fact that it looks like a poodle crossed with a moth thanks to its furry coat. From the photos taken, Anke believes the moth is just one inch in length, which makes it understandable why this insect has not been seen regularly. 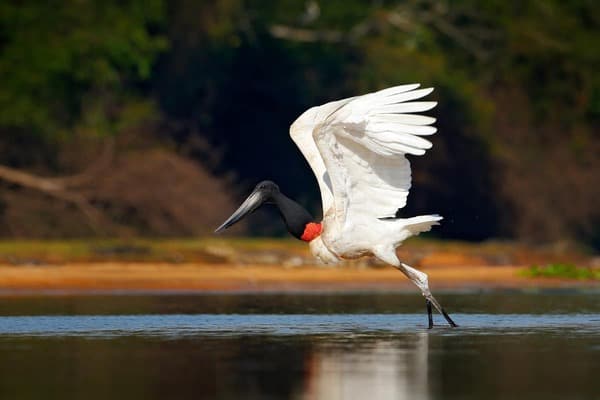 Storks are generally thought of as placid creatures that deliver babies. This could be further from the truth. Especially when it comes to the Jabiru Stork. One of these creatures attacked a patron at the Belize Zoo. The bird tried to stab the unlucky zoogoer with its beak. Thankfully he didn’t kill the lad, but the experience showed how dangerous this interesting looking bird is. With a black head and beak and red neck, it looks unlike any other stork on the planet. 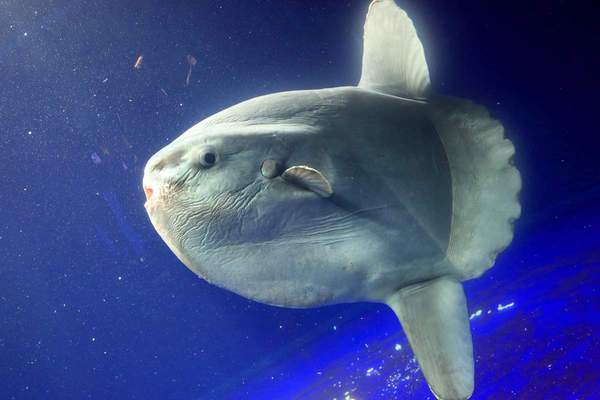 The ocean sunfish is one of the heaviest bony fish in the ocean. This tropical fish has a completely flat body that makes it look like a thin piece of debris floating in the water. This fish is a predator that feeds on all manner of sea creatures, from larger fish to crustaceans. Incredibly these fish can grow up to ten feet ten inches long and 13 feet nine inches tall, yet they pose no threat to humans. 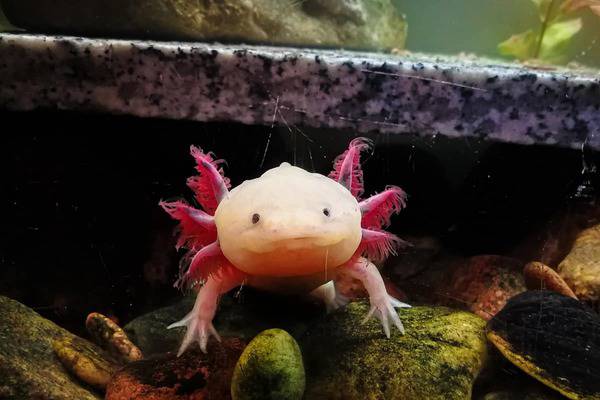 Similar to the salamander, the axolotl is an amphibious species that live in the water instead of evolving to walk on land. Found in the lakes and canals of Mexico City, these creatures are listed as critically endangered, with only a handful left. Looking something like an underwater snake with legs and fins, these creatures appear quite cute. They were a popular exotic pet until their numbers dwindled. 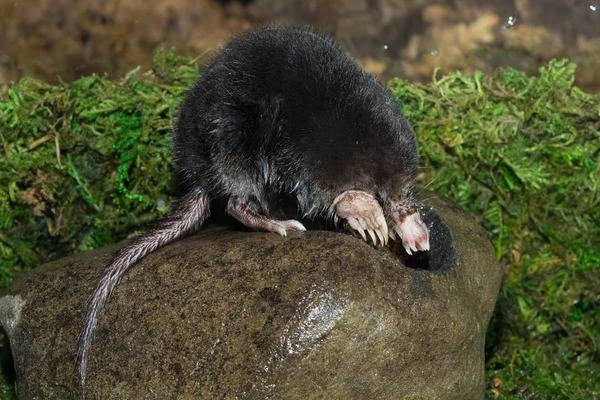 When it comes to odd beasts, look no further than the star nosed mole. Found in parts of North America, this animal has a star-shaped structure on the tip of its nose. Known as Eimer’s organs, this hideous looking appendage is actually quite useful. It contains over 25,000 receptors that help the blind mole find its way around. The star nosed mole is the only creature on earth with this organ and relies on it to survive. 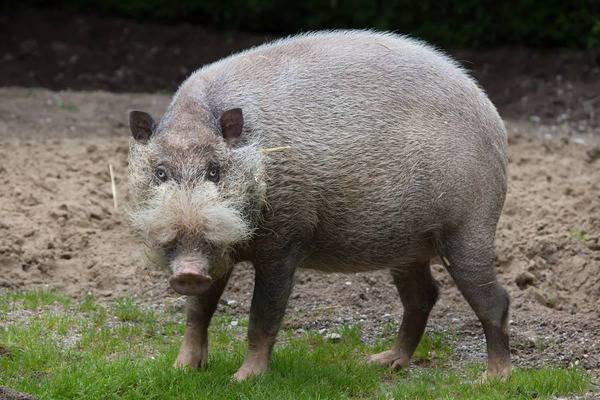 Found in Southeast Asia, the bearded pig is exactly what you think it is. A pig with a beard. Living in swamps and mangroves, the pig isn’t any different from other pig species, besides the beard. There are a number of these animals in captivity but there is no plan to continue to put them on show, meaning they will soon only be found in the wild.

See more about - The 10 Most Interesting Australian Mythical Creatures 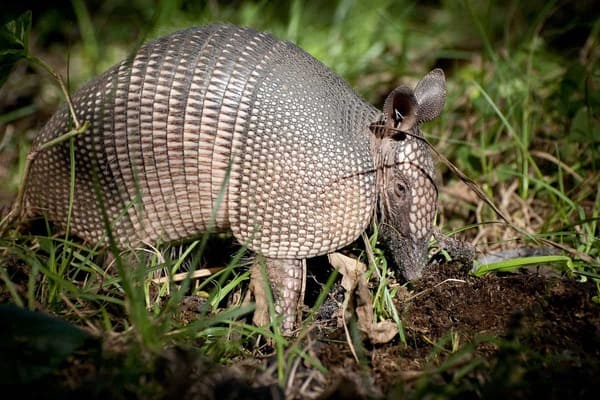 This is the smallest member of the armadillo family and can fit comfortably in the palm of your hand. Highlighted by its pink shell, the pink fairy armadillo lives a solitary life in the deserts of Argentina. The odd creature is nicknamed the ‘sand-swimmer’ because it is said that it can “burrow through the ground as fast as a fish can swim in the sea.” Pretty impressive for such a small animal. 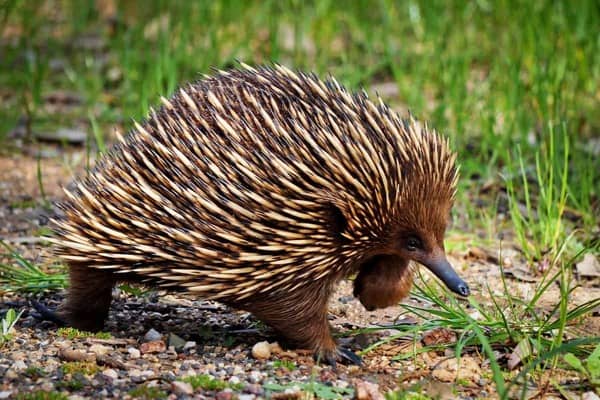 Here is one weird animal you don’t want to get anywhere near. The echidna has sharp spikes all over its body that can cause harm. While many believe they come from the same family as the porcupine, they are actually closer related to the platypus. They have been on the planet for somewhere between 20-50 million years, evolving from sea creatures to land dwellers. They feed on ants and are very timid creatures who are easily scared. 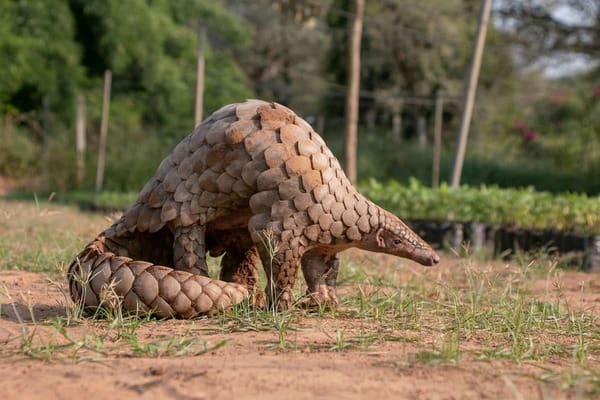 The pangolin is the only known mammal on the planet with scales. It can be found in Africa, Asia, and India. The scales that cover the pangolin are similar to fingernails. When threatened, they roll up into a ball and resemble a pine cone. The scales act as a defense mechanism against attack. Their scales are believed to have medical benefits, meaning the population of pangolins is much smaller than it once was. Although on the endangered species list and banned from being traded, poachers continue to hunt these animals. 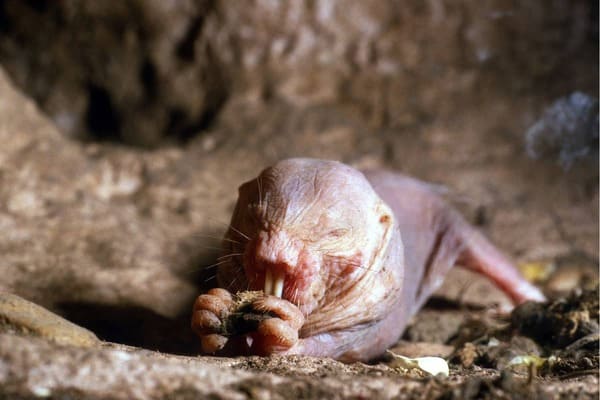 Another mole to appear on this list, the naked rat mole is just as freaky looking as the star nosed mole. These hideous creatures have little hair and possess sharp teeth that help them bury underground. Located throughout Africa, the naked rat mole is a scientific marvel. Not only do they live extraordinarily long lives for a rodent, but they are resistant to cancer and acid and can survive with very little oxygen. 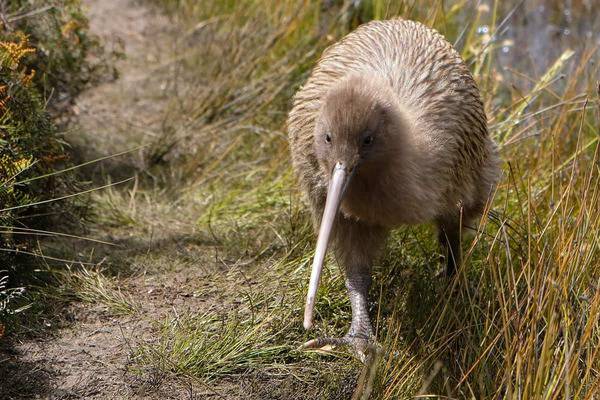 The national animal of New Zealand is a bird resembling a small emu or ostrich. There are five main species of Kiwi bird, each varying in size. What they all have in common is the large beak they possess. They are also one of the only flightless birds whose eggs are just about as big as themselves. The Maori people of New Zealand hold the Kiwi bird in high regard, believing they are protected by the Tāne Mahuta, god of the forest. While they use their feathers for the Kahu Kiwi–ceremonial cloaks–they now only use the feathers of dead Kiwi birds to keep the population thriving. 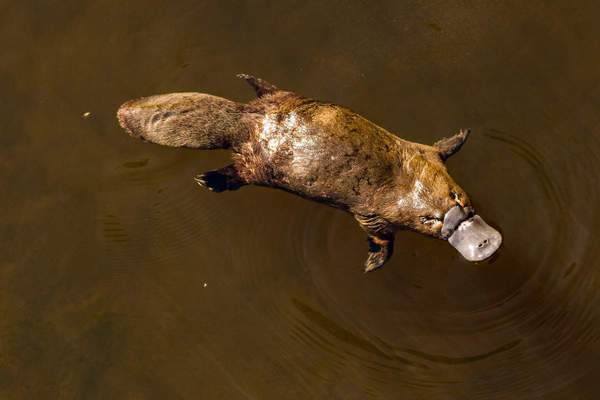 Mainland Australia is home to a variety of weird and wonderful creatures. The platypus certainly fits that criteria. This strange creature is like a large mole with flippers and a duckbill. There are no other species like it on earth. Both the male and female members of the species have poison in their ankle spurs, but it is only the male who can deliver the venom. While not lethal to humans, it can kill smaller creatures like dogs or cats. 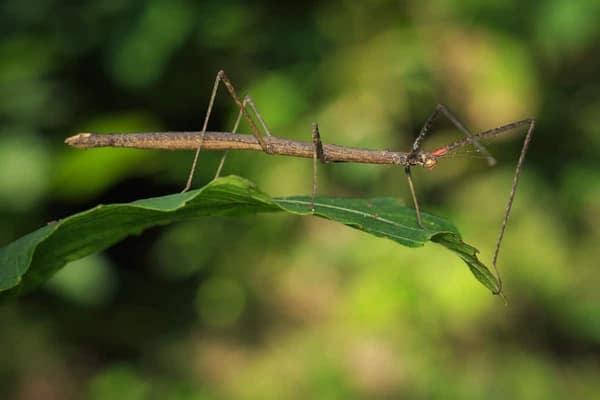 Part of the Phasmatodea order of insects, these creatures resemble sticks. They have a natural camouflage that helps them blend in with their surrounding. Their skinny and stick-like nature means they can easily hide from their prey. They are found all over the world, apart from Antarctica and Patagonia, where the weather is too cold. They also play an important role in the ecosystem and are often kept as exotic pets. 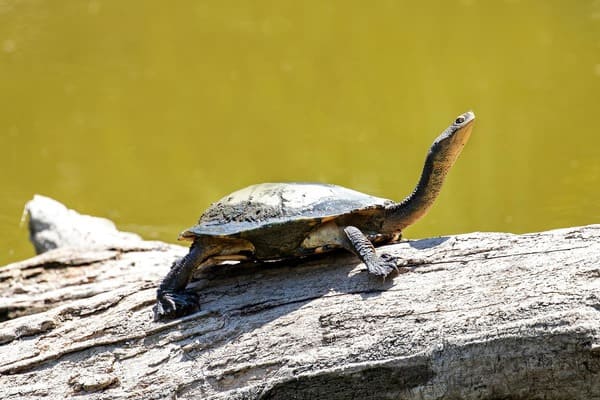 This Aussie turtle is different from your standard turtle thanks to its long neck. Instead of pulling directly back into the shell, its neck and head bend sideways like a snake. Besides that, they are pretty much everything you imagine a turtle looks like and lives. But if you saw one out in the wild you would definitely get a shock at the way its head moves in and out of its shell. 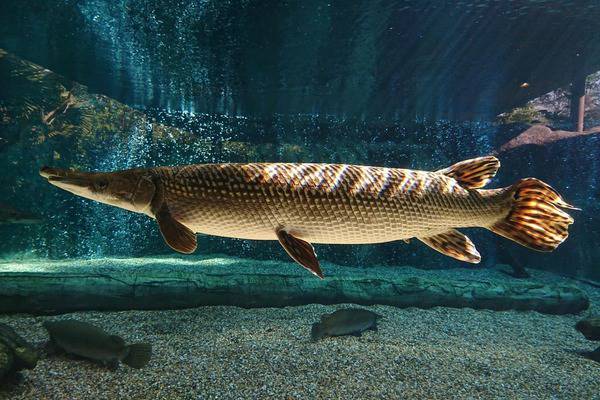 This species of fish appears to be a normal member of the gar family. That is until you open its mouth. The alligator gar has a snout like a gator that is lined with sharp teeth. This fish is said to be over 100 million years old, which is incredible. They can grow up to ten feet long, and while they look menacing, are rather placid. Found primarily in the United States and Mexico, these fish are an important part of the local ecosystem. 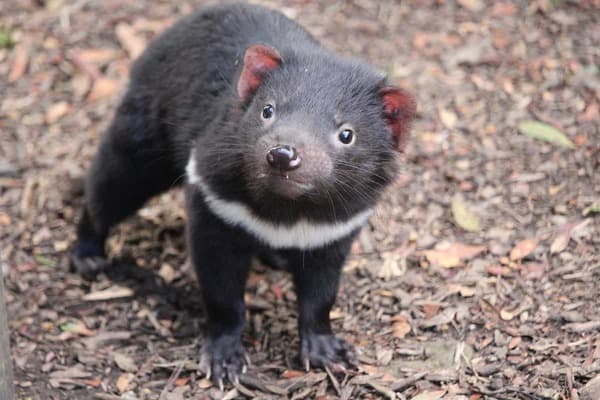 Native to Tasmania, the Tasmanian devil is the largest carnivorous marsupial in the world. As well as funny looking, it is an aggressive creature possessing speed and strength. It has a powerful bite that can easily tear into flesh and crush bones. These solitary animals are nocturnal, although they do enjoy the odd day laying in the sun.

While culling was responsible for a decrease in the population, the new threat is devil facial tumor disease (DFTD). The disease typically kills a Tasmanian devil within six months. Steps have been carried out to secure the future of the animal, with zoos around the world housing them. 47 have also been shipped to Australia where they are living disease-free in a reptile park.

See more about - The 14 Most Famous Monkeys