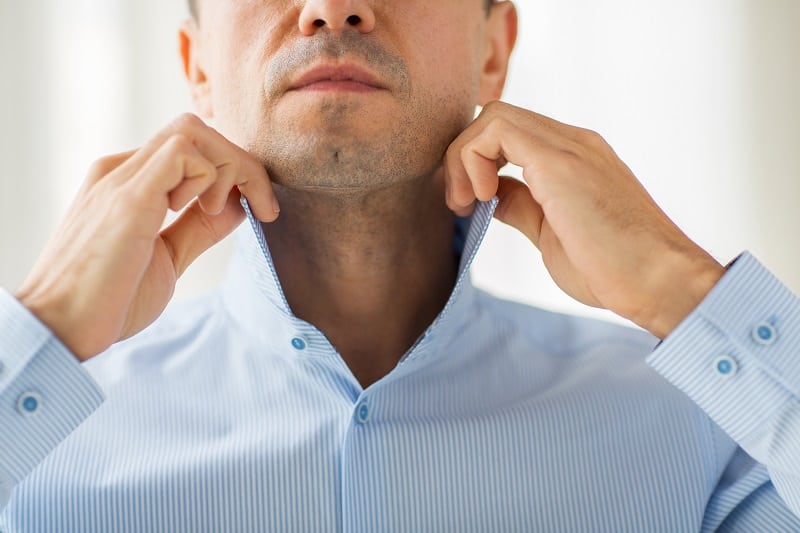 While many may think that men’s collared shirts come in one standard type and make, the classic men’s dress shirt actually has several different variations. From the fit to the buttons to the cuff style, collared shirts are available in a diverse array of designs, making them a versatile yet necessary item in any man’s closet. Being that most men who buy dress shirts are more focused on the color or fit of a dress shirt, the variety of different collars tends to go unnoticed.

However, the style, shape, and type of collar on a shirt is a very important factor when putting together a solid outfit. Regardless of whether the occasion is formal or laid back, the type of collar being sported can truly make or break an outfit. That’s why we’ve put together this guide to the different shirt collar types and possibilities.

A few things to know before breaking down the actual collar types are the different factors that go into making a collar stand out on a typical dress shirt. The first factor is collar stiffness. While more formal or work attire sometimes calls for a more rigid and firm collar, most men of modernity prefer a more flexible collar, both for comfort and design.

Two more characteristics that are important to be aware of when evaluating collar types are height and size. While the height of a collar is more related to how high the collar extends up the neck, the overall size refers to how prominent the collar is in comparison to the rest of the shirt.

Lastly, the collar spread determines how wide the collar itself is, which is also often relative to its size. Each of these different factors is important to be aware of as they each have a different effect on the shirt in its entirety. Being able to know if your face shape looks most complimented by a shorter collar spread or a smaller collar, in general, will save you a lot of time and struggle when attempting to look your best and find the best dress shirts for your style.

See more about - The 18 Best Dress Shirts For Men 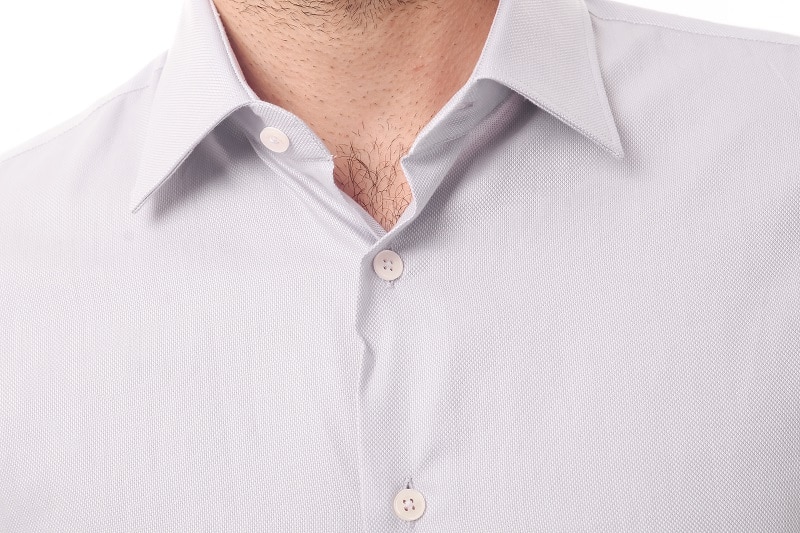 The point collar is perhaps the most standard and common collar found in the States. Per the name of the collar, it can best be detected by the prominent points found at the tips of each collar. Being that the spread on point collars tends to be relatively narrow, it works as a good option for business or formal shirts since a tie would not be exposed at any place beyond the knot on either side. In terms of stiffness, most pointed collars seem to come in at a medium stiffness, meaning the collar will most likely stand away from the shirt itself when wearing a tie.

A sort of sub-option to the point collar is the spear collar, which is basically the same as the point, only the tips of the collar are longer than normal. The spear collar is seen as being somewhat retro, but with a recent resurgence of 70s style clothing being trendy, these specific pointed collars are making a comeback as well. 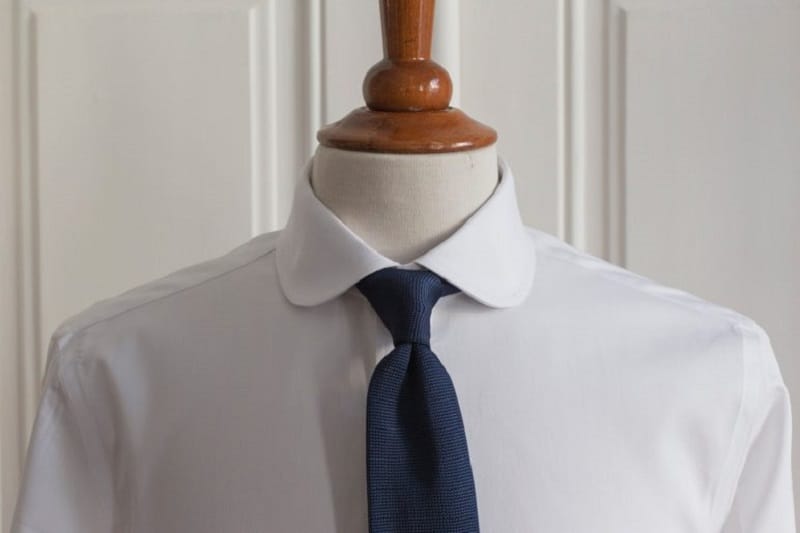 The club collar is a bit more formal and elegant than a point, and may even be viewed as a bit too uppity for some men. However, it is a great option for those times when that formal, East Coast vibe is exactly what you’re needing.

The most eminent feature of the club collar is its rounding off of the collar points. Though one might think a pointed collar would look more mature or professional, there is something about the rounded ends that gives off a very regal look to a simple button down. 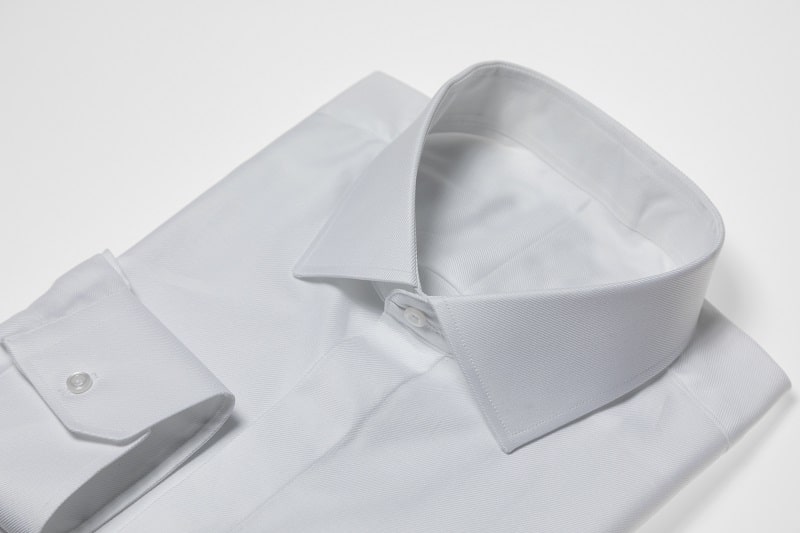 The tab collar boasts a very archetypal component to its design. Though it has a similar spread to the classic point collar, the tab collar features a distinctly vintage look. Per the name, a tab collar has an underlying tab beneath each side of the collar that fastens to the very top button of the shirt.

This tactic gives the garment a more distinguished appearance by pulling the collar tips closer together and lifting the base or knot of a tie. That being said, a shirt with a tab collar can only ever be worn with a necktie as opposed to a more casual look where the shirt opens at the neck. Being that a tab collar is simply defined by the presence of a hidden tab, a tab collar can also be either a club or pointed collar depending on the shape of the collar leaves. 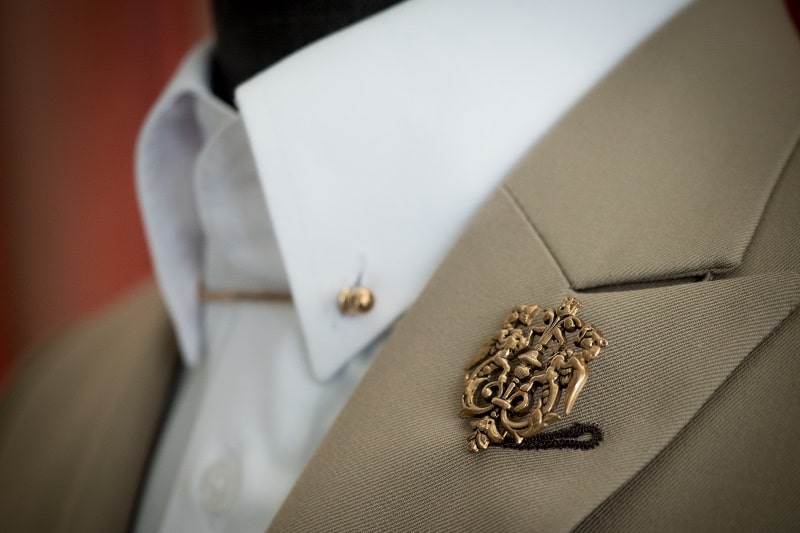 The pin collar is a more rare and exclusive collar type that is not sold by too many designers. In a pin collar, special holes are built into the collar leaves so you can use a collar pin – which resembles a large safety pin – to close more space between the collar points while simultaneously raising your tie. 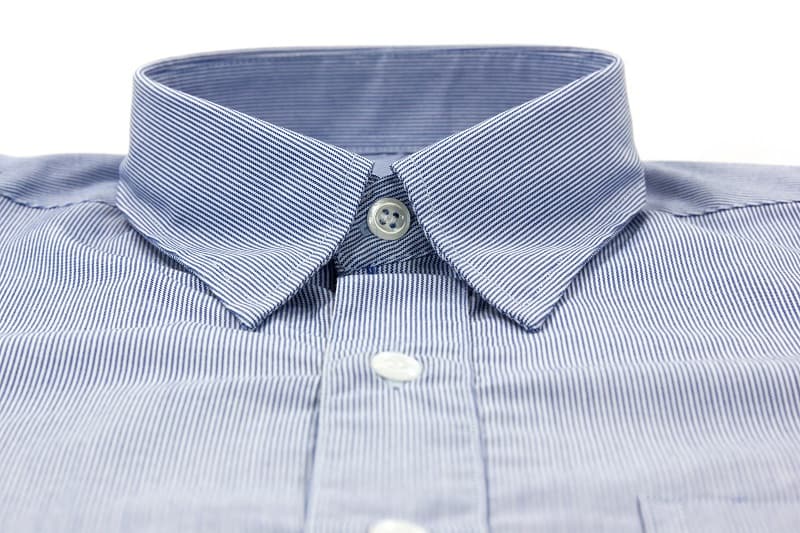 However, if you are able to find one and rock it in a more modern and intentional way, you are sure to be one of the only guys in the room sporting this vintage piece. Best of all, they were usually worn in a detachable form, meaning that as soon as it becomes too uncomfortable or stuffy, you can simply take it off.

The Button Down Collar 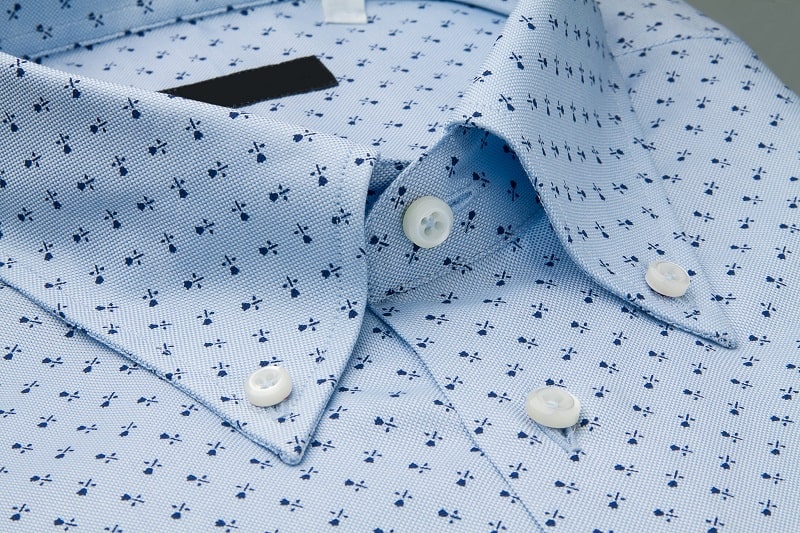 Another favorite collar type is the button down collar. Though it first gained its prominence and popularity while on the polo fields of England, the button down collar became a staple in the “prep” and Ivy league genres of clothing after being introduced to American society by Brooks Brothers.

The button down collar is relatively similar to the basic point collar, however, it’s known for being a bit more versatile in terms of dressing down and looking casual. Button down collars give the wearer an option to either button the folds in place or leave them unbuttoned for a more loose, laid-back look.

Some even come with the buttons hidden underneath the collar leaves. Many button down collars come with a slightly wider spread than the previously listed options, however, the softness and flexibility of the collar can vary quite drastically. 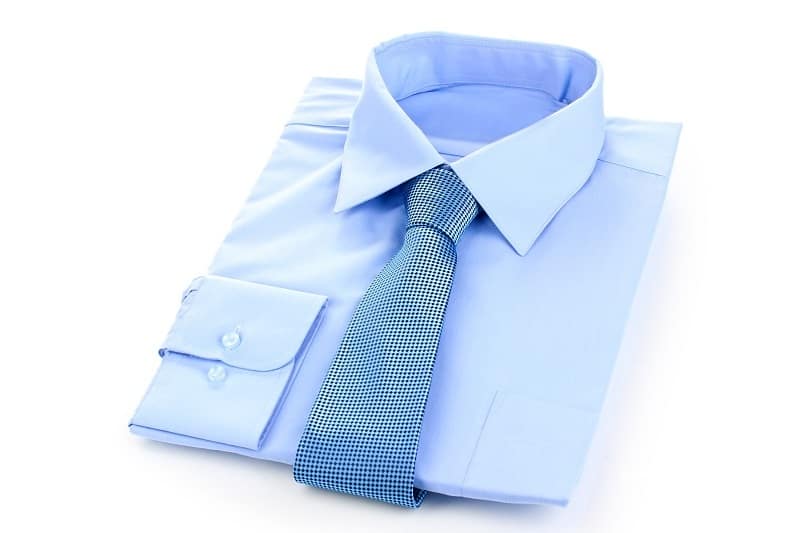 A spread collar, like the name suggests, has a wider distance between the two collar points. The main concern that comes with a spread collar is the inability to hide one’s tie above the knot due to the width between folds being larger, however, a spread collar works great for wider tied knots, such as the ones popularized in a lot of European business wear.

It would also work for ties that are made of thicker fabrics such as wool or cashmere, being that they tend to have a little extra fluff that could fill the space nicely. The majority of spread collars leave about 5-6” between points, while 4” between points is considered a “semi-spread” collar. 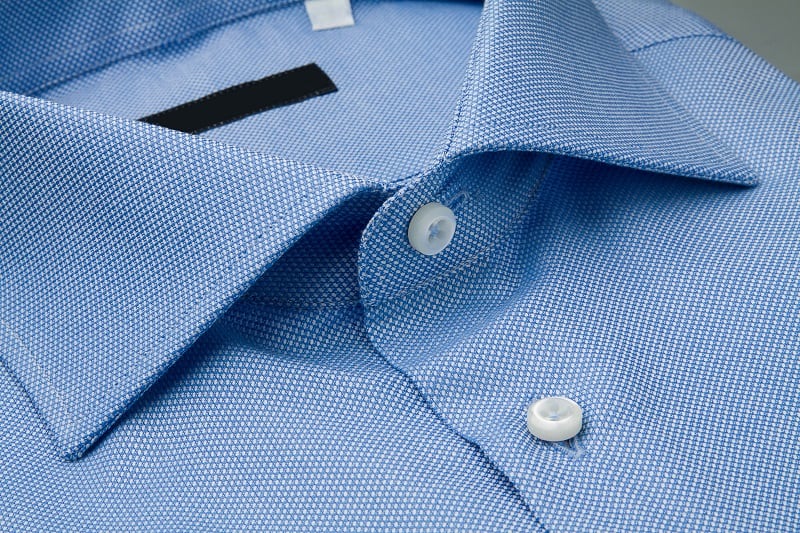 While 5-6” between points is considered a spread collar, anything above 6” in width classifies the collar as a cutaway. Cutaway collars require large, thick ties to fill the wide gap and avoid showing the strings of the tie above the knot. Some cutaway collars are even labeled “extreme cutaway,” meaning that the collar points actually angle back behind the neckband of the shirt.

The cutaway collar is undoubtedly a more aggressive fashion choice for men, but they can be extremely flattering when worn with no tie and leaving a button or two undone. If you are looking for a more sultry, Italian-esque look, then a button down with a cutaway collar might need to be your next purchase. 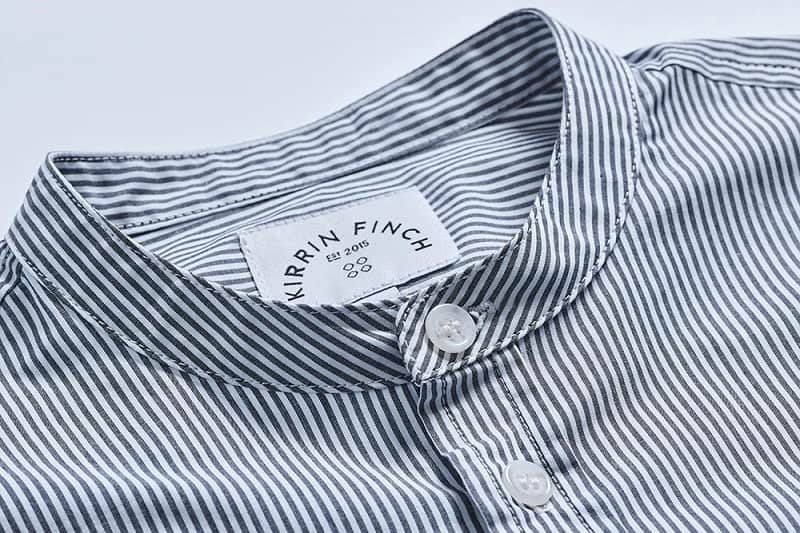 The height of a band collar tends to stand between 1-2” high. Though the band collar was first originally found in traditional Chinese garments, it has since become a more rustic, casual option when sported in modern dress. 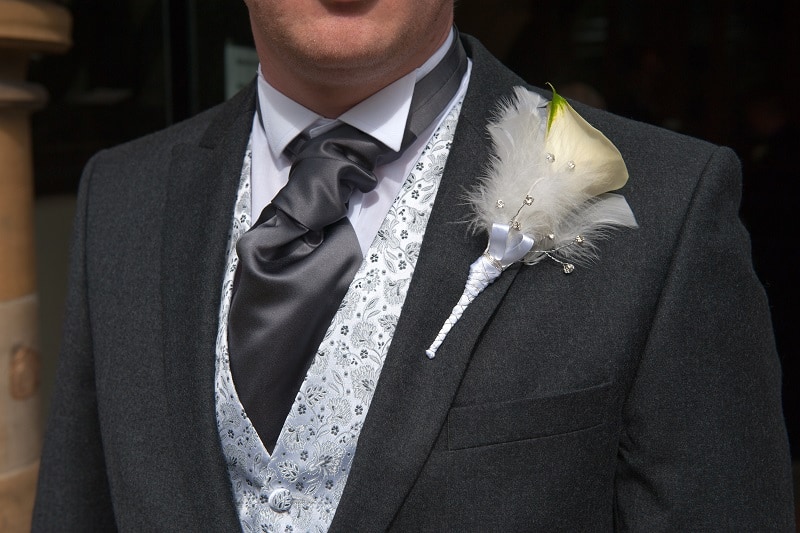 The final option on our guide to shirt collar types is the exclusive and formal wing collar. The wing collar is specifically reserved for the most orthodox and dignified of occasions, making it probably the rarest collar type of them all.

Since the points on a wing collar are rather small, it is considered a more minimalist collar despite the fact that the tips of it actually stand directly up, imitating the open wings of a bird. Rather than donning a tie with the wing collar, bow ties are what most often accompany this white tie exclusive collar type.

See more about - Tuxedo Shirt vs. Dress Shirt: Everything You Need to Know