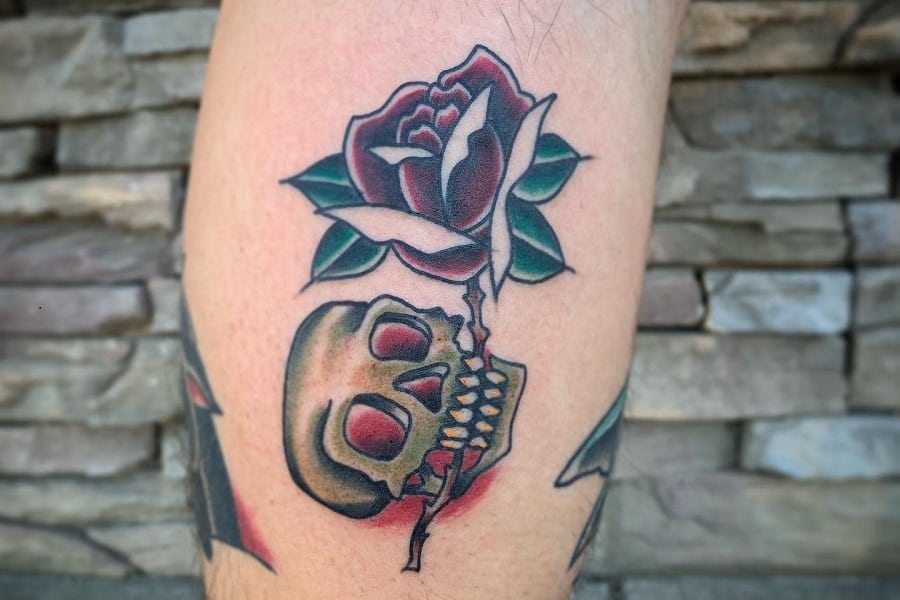 The skull and rose as tattoo idea represent duality – the polar opposite positions within a given idea. Life versus death. Health versus decay. Good versus evil. The celebration from the birth of something new as enemies or obstacles have been defeated or cast aside.

The skull rose concept is a superb acknowledgement that with struggle and its inevitable end comes great beauty.

You can apply a range of skull and rose ideas to your next piece of tattoo inspiration. You could mix a traditionally Mexican sugar skull tattoo with an English Tudor rose to honor your relatives. Throw a cheeky red rose amongst a heavy black ink human skull for your next sleeve tattoo to shock and dismay.

The options are endless. The choices are yours. Read on for superb skulls and roses tattoos that could make it into your next tattoo design.

The representation of two opposing ideals is a central tenet to the art of skull rose tattoo. These vastly different sized tattoos – ranging from small tatts to full sleeve – allow each tattoo artist the opportunity to apply versatility.

They juxtapose the skull representing life and/or death, with the rose symbolizing beauty, love, and vitality. There’s so much room for personal expression in the skull and rose tattoo design, that every style or application technique can be utilized successfully.

The forearm remains one of the most popular placements for ink. These examples of beautifully etched skull and roses evidence why.  Not only can these choices show the skull and rose in isolation, but each illustration implements brilliant technical application.

The use of shaping patterns, color accents – check out the bad ass watercolor – and clarity in linework help the ink patterns standout as major forearm body art pieces.

I really dig the variation in tattoo style these full chest pieces exhibit to make bold statement tattoos. The central belief in an Eye of Providence tattoo is that God sees all – the use of the blue eye in this example is well placed against the depiction of life and death.

The Mexican sugar skull, or Calavera, traditionally means representing a dead loved one on the Traditional Dia De Los Muertos. In contemporary tattoo culture they also take on the death of a challenge and the new beginnings.  The blazing orange yellow of each rose flower is amazing in opposition to the heavy shadow skull for the other new wave beautiful tattoo. The clock tattoo, unsurprisingly, represents time.

Live for today for death is coming for us all. Life and death. Beauty, vitality, and inevitable end. The eternal struggle between good and darkness. Skull and rose tattoos have never been described as flippant. These leg tattoos are stand-alone pieces showing great variety in execution and design.

I love the red rose growing from the bone of skull, or the simply breathtaking deft linework in fine black ink.  The last example specifically references memento mori – an object kept as a reminder of the inevitability of death – but the argument can certainly be made that all tattoos in this list are memento mori tattoo art.

Skull and rose tattoos have been a staple of American tattoo art since before there were tattoo machines. As wider tattoo popularity, the internet, and sharing of global ink culture has increased, the choices in tattoo design ideas, placement, and mixing of symbolism has increased with it.

Neck tattoos are now an increasingly popular placement for body art enthusiasts, whereas in the past they were purely for those with limited space, or for rebellion and alienation. These examples utilize strong American traditional elements in color and heavy black.

If you’re inexperienced and looking to make a big splash with neck ink, then maybe taking a test run with a temporary tattoo would be a good idea as it’s guaranteed to change perception, not just of you, but of your ink collection.  Are you enjoying these skull and rose tattoo ideas?

For more skull tattoo design click on the links below for inspirational galleries below:

These examples show the range of brilliance that a black and gray tattoo can do when the color emphasis is taken away from a piece of body art.

As a professional tattoo artist, if you can’t nail a simple black and gray skull or rose tattoo then you’ll be looking for a new career by the end of your first week.

Line thickness, use of negative space, gradient shading, and technical linework are just some factors separating beautiful tattoo such as these from more mediocre depictions.

Why have a red rose and boring ass skull when your body is your canvas? Choose the colors you want to create roses and pretty skull tattoos. These colorful examples range from the traditional color focus, to color schemes and anatomy not found in any books.

Tattoos that include both a skull and a rose often denote the contrast of life and death, or beauty and decay. It’s a universal topic that once upon a time would have been kept to masculine tattoo. This archaic view of man and woman has been eradicated as the feminine inspired skull rose combination tattoos above display.

Traditionally this type of tattoo would have meant heavy hands, thick lines, and dark aspect only. These tattoos design depict the skull and rose in a variety of different styles, using delicate color and floral theming to accentuate the duality between death and beauty.

Instagram: @box_artA skull tattoo design traditionally represents death or decay but can also have other meanings, including as a marker for life. In outlaw and prison culture skull ink is rebellion on flesh, harking back to the time when a skull and crossbones flag was sighted on the horizon and sent fear coursing through a sailor’s body.

The rose, skull, and dagger (meaning bravery, memory, and protection) will always be central to American traditional tattoo, and its evolution into neo traditional and new wave inspiration.

The rose is an almost universal symbol for love. According to Aitken-Smith’s Tattoo Dictionary the rose further incorporates “symbolic interpretation of transformation, mysticism and illumination.”

These examples do an amazing job focusing on the beauty of the rose in contrast to the skull. Rather than use fantasy symbolism or over the top color and shading gradients, they opt for realistic interpretations that look like they can come from photo albums, sketch or textbooks.

The mastery involved in using skilled technical elements – notice the brilliant deployment of elements such as fine needle, negative space, sketch and white ink – with absolute precision can take a lifetime of work in the tattoo studio.

You don’t have to be huge to be a tattoo banger! Small tattoos featuring skull and roses are just as difficult – in the case of the bad ass single needle tattoos above, even more so – than larger works.  Pretty skull tattoos balance the small aspects with attention to fine details, balanced color and shading that put the tattoo artist’s concentration and commitment to getting the little things right, to the test.

What is the meaning of a skull and rose tattoo?

When applied together in body art the skull and rose tattoo represents duality, symbolizing the struggle between life and death, the contrast of good and evil, the balance between beautiful and ugly.

What does a rose tattoo mean?

The rose is an almost universal symbol for love in tattoos design. According to Aitken-Smith’s Tattoo Dictionary the flower further incorporates “symbolic interpretation of transformation, mysticism and illumination.”

What does a skull tattoo symbolize?

A skull tattoo design traditionally represents death or decay but can also have other meanings, including as a visual symbol of rebellion and alienation, or as a marker for life.  Did you enjoy these skull rose tattoo ideas?

For more amazing roses tattoo design or classic temporary tattoos inspiration click on the links below: