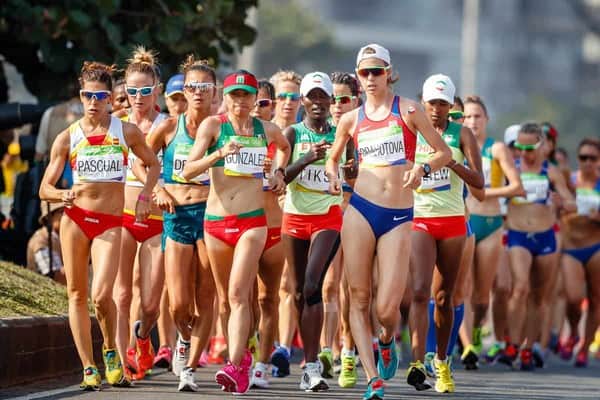 The 15 Weirdest Olympic Sports of All Time

The Olympic Games is one of the greatest sporting competitions in the world. Every four years the greatest athletes on the planet come together for their country.  Their aim is simple: win a gold medal and become a national hero. Over 200 nations are represented at the event, sending their best athletes to compete. The selection of sports continues to change and expand each year. The 2020 Tokyo Olympic Games saw sports such as surfing, skateboarding, and sport climbing represented for the first time. These are quite different from the sports most people associate with the Olympic Games. But these are nowhere near the weirdest Olympic sports included.

Since the inaugural Games took place in 1896 in Athens, Greece, there have been many weird and wonderful sports. These sports aren’t necessarily bad, just different from what you would expect to see at the Olympic Games. Many of these weird Olympic sports, such as rope climbing and the horse long jump, didn’t last long, understandably, while others are still going strong today.

We want to highlight some of these strange, interesting, and downright bizarre Olympic Sports and have compiled a list of them below. Read on and discover some of the weirdest Olympic sports of all time. 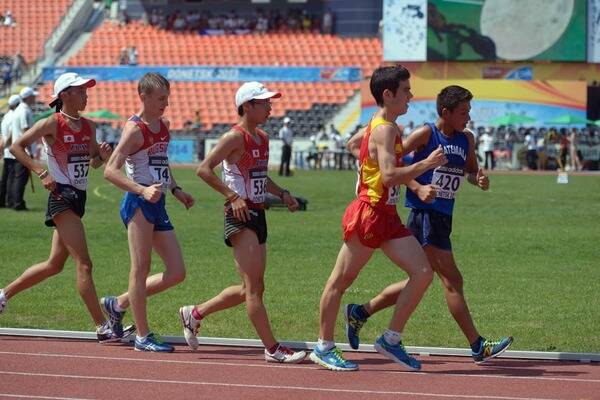 It’s hard to believe that walking is an Olympic sport. Something we do every day is actually a verified sport that is still held at the Olympic Games today. Of course, it is not as easy as it sounds. There are two main rules competitors must adhere to. The first is that their back toe doesn’t leave the ground until the heel of the front foot has touched the ground. Breaking this rule is known as loss of contact. The second is that the supporting leg must remain straight until the body passes directly over it. Sounds simple enough, but judges are very alert and many walkers have found themselves disqualified for the slightest rule breach.

There are two main distances, 12 miles (20 km) and 31 miles (50 km). Race walking is quite a strange sport to watch but one that continues to gain more fans every Olympics. 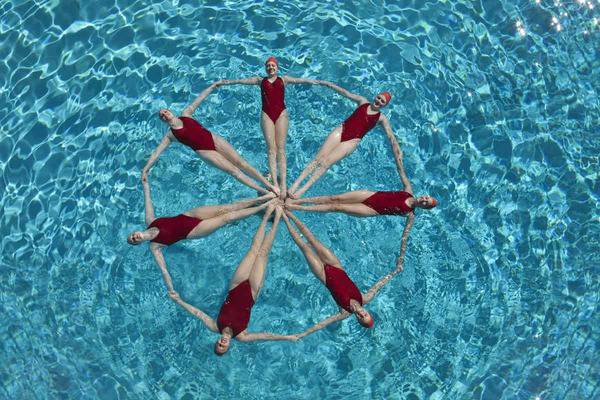 There are many different water sports in the Olympics, but none quite as bizarre as synchronized swimming. It’s a sport where a group of people performs a choreographed routine in the water. It is quite a sight to behold. Although not the norm, it is entertaining. It is one of the few events at the Olympic Games that is women only. While solo synchronized swimming was part of the Games when it first started, athletes can now only be part of a team or duet if they want to compete.

The best part about this sport, besides the outlandish routines, is the fact that they perform to music. This can be anything from classical music to modern pop songs. The athletes also wear colorful costumes that add to the pageantry. Just check out Italy’s gold medal-winning routine from the 2020 Tokyo Olympic Games for further proof. 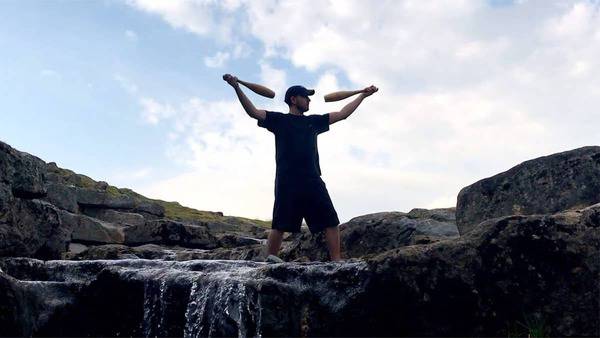 This Olympic event appeared at the two tournaments held in 1904 and 1932. The sport, which resembles juggling, requires competitors to create a routine using bowling pin-type clubs. But the clubs must never leave the hands. It is similar to rhythmic gymnastics, just with bowling pins instead of ropes, hoops, balls, or ribbons. Athletes scored points based on their routine. This was a Summer Olympic sport, not a Winter Olympic event, and one we probably won’t see back at the modern Games anytime soon. 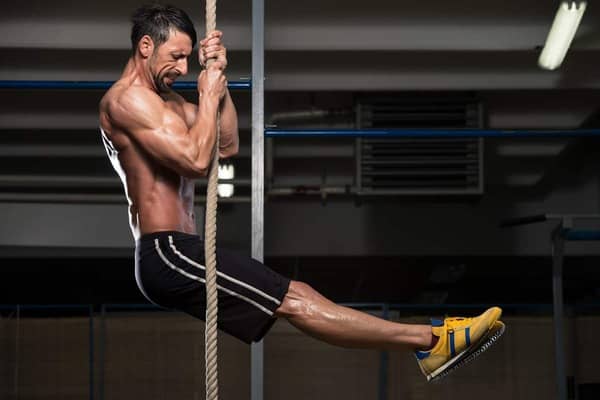 This is a sport you normally associate with high school gyms, but it was also an Olympic sport at one stage. As the name suggests, rope climbing involves climbing a rope. Who would have thought? The hardest part is that you can not use your legs. It’s all about upper body strength.

Rope climbing was featured as part of the gymnastics program at four Olympic Games; 1896, 1906, 1924, and 1932. Competitors were first judged on speed and style, but eventually, it came down to who could make it to the top in the quickest time. 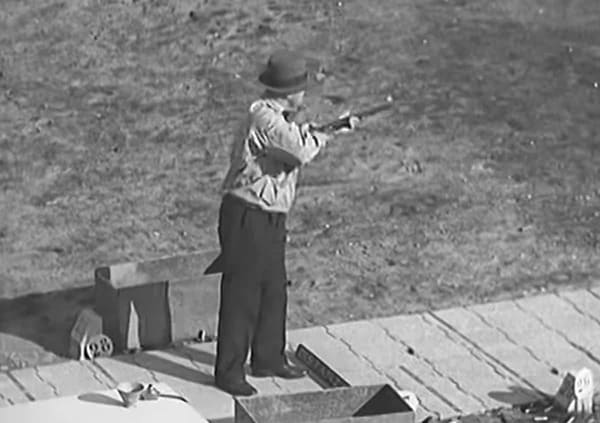 There is no way an event like this would get the green light today. A percussor to modern day pigeon shooting, live pigeon shooting substituted the clay pigeons for real ones. The aim was to shoot as many birds as possible in the time allocated. It was the only event in Olympic history where real animals were killed for sport. Around 300 birds were believed to have been killed or maimed during the event, upsetting many in attendance. This was most likely the reason it only appeared at one Olympic Games in 1900. 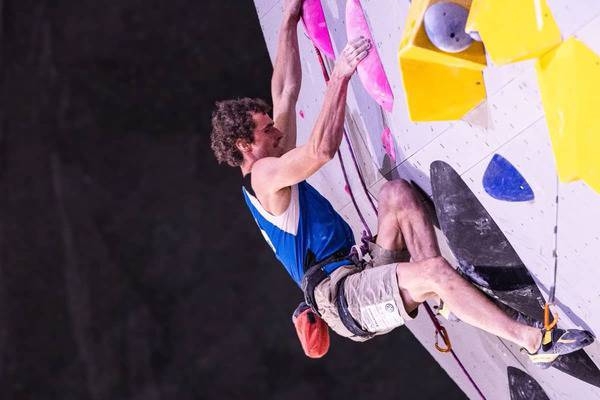 Sport climbing made its debut at the 2020 Tokyo Olympic Games. It is a type of rock climbing whereby the participant must climb a wall with permanent anchors. It involves three disciplines: bouldering, speed, and lead. Bouldering requires climbers to scale a 14-foot wall without safety ropes. Speed is a race against the clock in a one-on-one elimination style contest climbing a 49-foot wall. The third event is about scaling a 49-foot wall and getting as high as possible within the time limit. This one is tricky as the competitors have no idea what the route will look like before the event begins.

While weird, sports climbing is quite enjoyable to watch. Especially the speed part of the competition, where the best athletes can scale the wall in just six seconds. 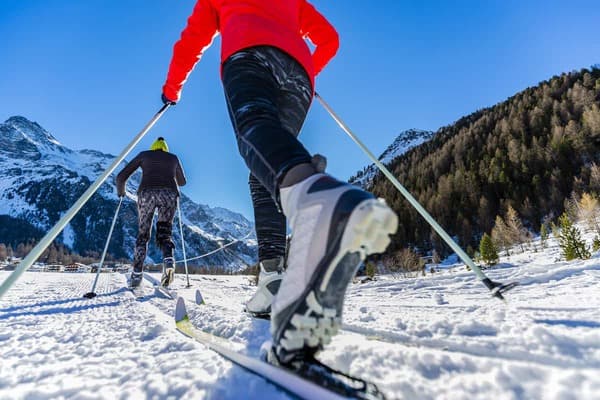 This might not seem overly weird but is quite different from your standard journey down a mountain on skis. As seen at the Winter Games (obviously, as there is no snow at the Summer Games), cross country skiing involves all the different disciplines of skiing. It includes alpine skiing, ski jumping, and Telemark skiing and requires steely concentration. This sport often causes a lot of excitement when athletes wipe out. While you don’t want to see anybody get hurt, some of the crashes are spectacular. 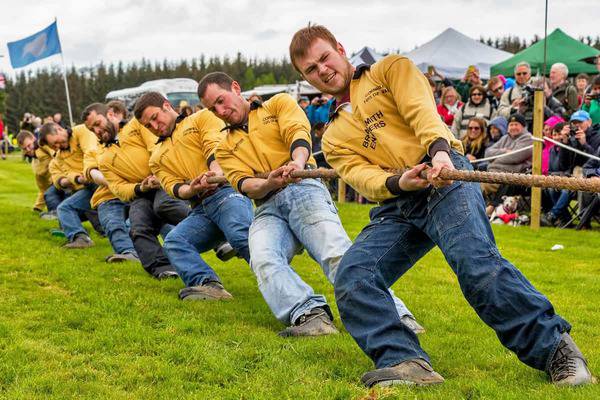 The classic tug-o-war made it into the Paris Olympic Games in 1900 and lasted until the 1920 games. It was considered a club sport, meaning countries could enter more than one team. This resulted in several countries winning more than one medal. In 1904 the United States won all three medals, claiming gold, silver, and bronze. This happened again in 1908 when the British team took home all three medals on offer. The early Olympic Games allowed for mixed teams too, with a number of these winning medals at the event. 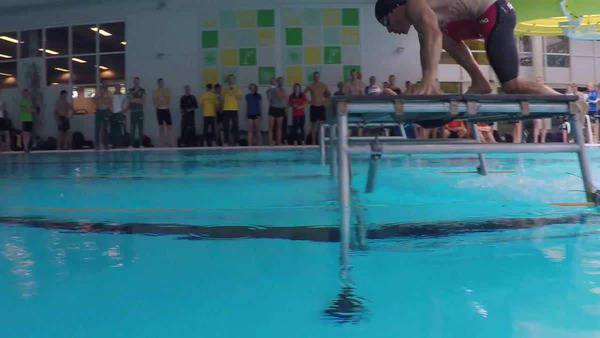 Swimming is hard enough, but imagine doing so with obstacles in your way? That’s exactly what competitors had to deal with at the 1900 Olympic Games. This was the only time in Olympic history this weird event was held.

Swimmers had to climb over two and swim under one obstacle while tackling the 200 meter course. They also had to swim freestyle, which was probably a good thing as it is the easiest and fastest stroke for this type of event. Australian Fredrick Lane took out the gold after already having won the 200 meter freestyle without obstacles. 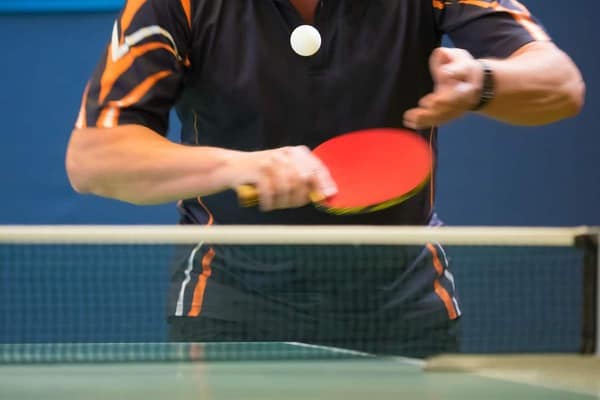 Table Tennis isn’t really weird, but to think it is an Olympic sport is incredible. Once you have watched the athletes involved in this sport go about their business, you quickly understand why they are highly revered. Table Tennis at a competition level is fast and furious. The reaction time of the players is just incredible and you are often treated to some wild shots.

It first debuted as an Olympic sport at the Seoul Games in 1988 and has featured at every Olympic Games since. At the 2008 Beijing Olympics, a team event was introduced to replace the traditional doubles format. 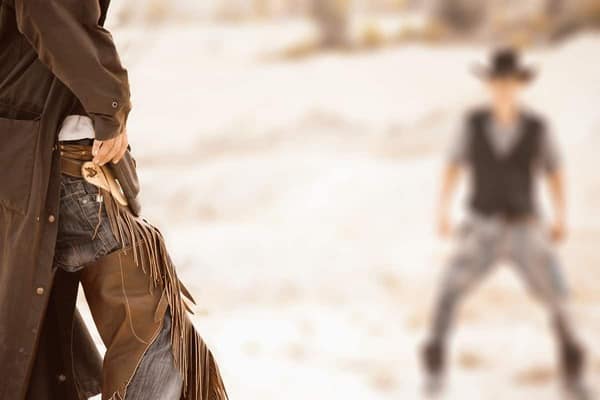 Thankfully this Olympic event didn’t actually involve real bullets. Just like you see in classic Western movies, pistol dueling involves two people standing apart and firing at each other. There were two events, 20 meters and 30 meters. This demonstration sport used wax bullets and the competitors wore lots of protective gear as an added precaution.

Pistol Dueling appeared at the 1906 Intercalated Games (a weird international mini-games in Athens) and the 1908 London Olympics. It is probably for the best that the International Olympic Committee stopped this from being a regular sport. Especially after the drama involved with live pigeon shooting. 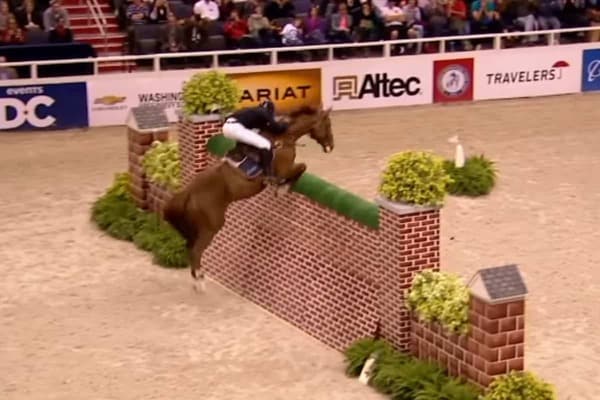 The Paris Olympic Games in 1900 played host to a variety of weird sports, including horse long jump. Appearing as part of the equestrian events, the horse long jump is pretty self-explanatory. It’s like long jump but on horseback. The winner of the event was Belgium’s Constant van Langendonck, who managed to jump 6.10 meters. While this might sound impressive, it isn’t a patch on the Olympic record. American Bob Beamon jumped a massive 8.90 meters at the 1968 Olympic Games in Mexico. 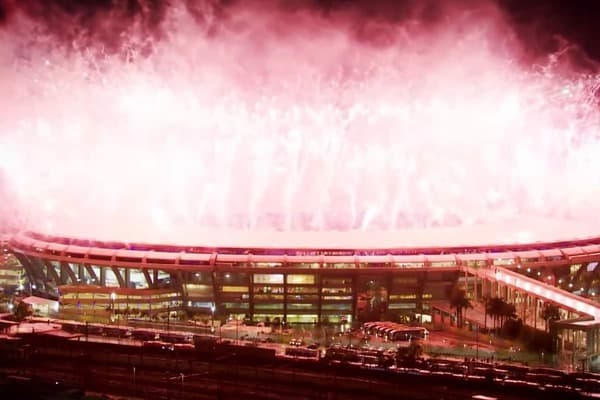 You read that right. Olympic medals were handed out for town planning. At the Amsterdam, Los Angeles, Berlin, and London Olympic Games between 1928 and 1948, town planning was an actual event. It was part of the architectural design category that came under the arts portion of the Olympic Games. During the early part of the 20th century, the arts were part of the Games, with people winning for sculpturing, painting, and town planning. It doesn’t get any weirder than that. 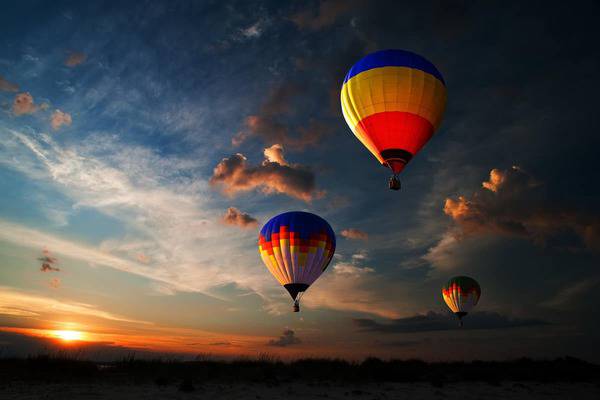 These days people enjoy going hot air ballooning for fun, but the sport had a competitive edge at the 1900 Paris Olympic Games. Those piloting the hot air balloons were judged on the distance traveled, the time spent in the air, and the ability to land at predetermined coordinates. The sport only lastest one Olympics after a ban on motorized sports came into effect. 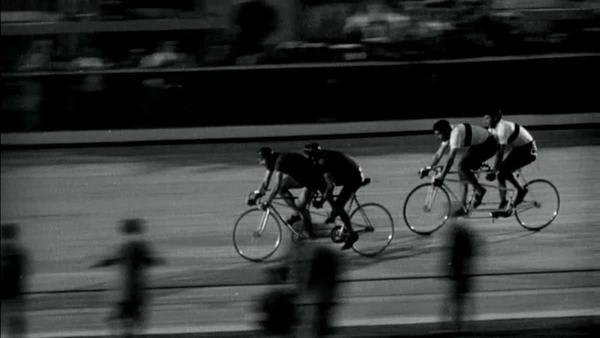 This event was a regular at the Olympic games for many years. It required two men to ride a tandem bike for 2,000 meters around a velodrome. During its time as an Olympic sport, Italy and France won the most gold medals, while Great Britain won the most medals overall with six, but only one of these was a gold medal. Tandem cycling last appeared at the 1976 Olympic Games in Montreal but is still part of the Paralympics Games.