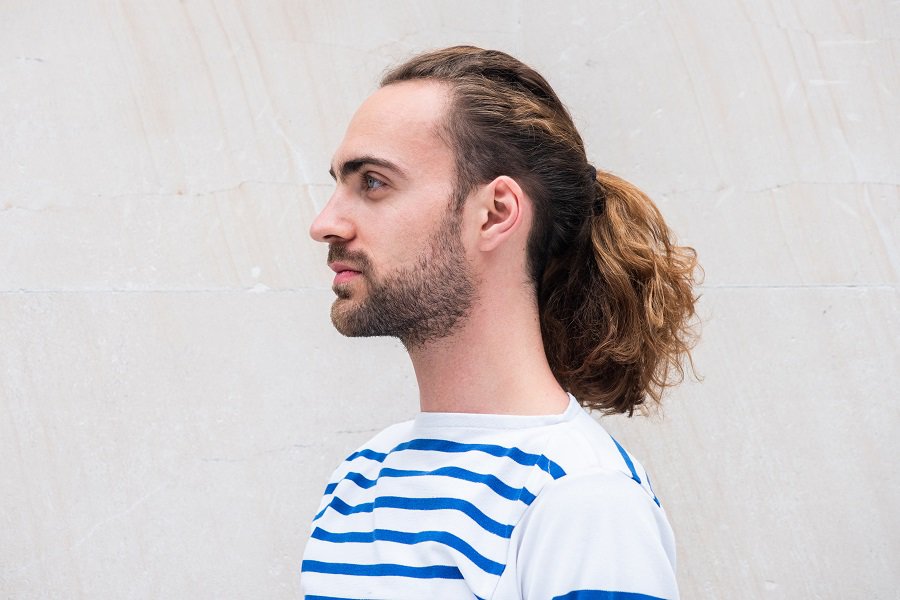 It’s a good time to be a man who is interested in fashion — never has there been such a diversity of options on the horizon for either men’s clothing or hairstyles.

However, while the possibilities for haircuts for men may seem to be endless, it’s inevitable that the most fashion-minded of men will eventually run out of inspiration. If the time has come for you to consider other hairstyles, you might want to turn your attention to the possibility of sporting a male ponytail.

The male ponytail is ubiquitous in many ways. Over the past few decades, it has carried with it many stereotypes from “biker” to “hippy”. Adopting the ponytail lifestyle may seem to be right out of the 80s or 90s at first, the truth is that there are many men out there who have been giving the ponytail a modern flare.

Here is a selection of some of the best ponytail styles for men, whether you are a long-time ponytail wearer who is looking for a fresh re-imagination of an old hairstyle or somebody who is on the fence about adding this choice to your overall aesthetic.

More likely than not, when you think of a men’s “ponytail” you are most likely imagining a small bun on the top of the head, also known affectionately as a “man bun”.

While not technically a ponytail, per se, we believe the man bun still deserves some praise. This hairstyle doesn’t just give off a carefree vibe — it literally is a carefree hairstyle thanks to the little effort required in throwing it together.

You may not have grown up near an Australian beach where you would regularly ride the waves, but you’ll certainly be fooling everyone with your hair in a stylish bun.

We love the way that dreads makes hair manageable, but sometimes even this hassle-free style can use a little bit of pulling back. The good news is that dreads make for a great ponytail, especially if you have medium to long dreads.

Low ponytails and high ponytails look equally good — the choice is yours and will most likely depend on the length of your dreads and how easy they are to wrangle.

Just because you have curly hair, it doesn’t mean that you have to miss out on the fun of styling your hair into a ponytail. In fact, the options are even more fun for men who are lucky enough to have luscious locks.

Most notably, curly hair looks great when pulled into a “messy bun”, especially if you allow for a few individual curls to fall down. If a bun isn’t your style, you can try pulling your hair into a neat low bun, as this also tends to work well for curls. 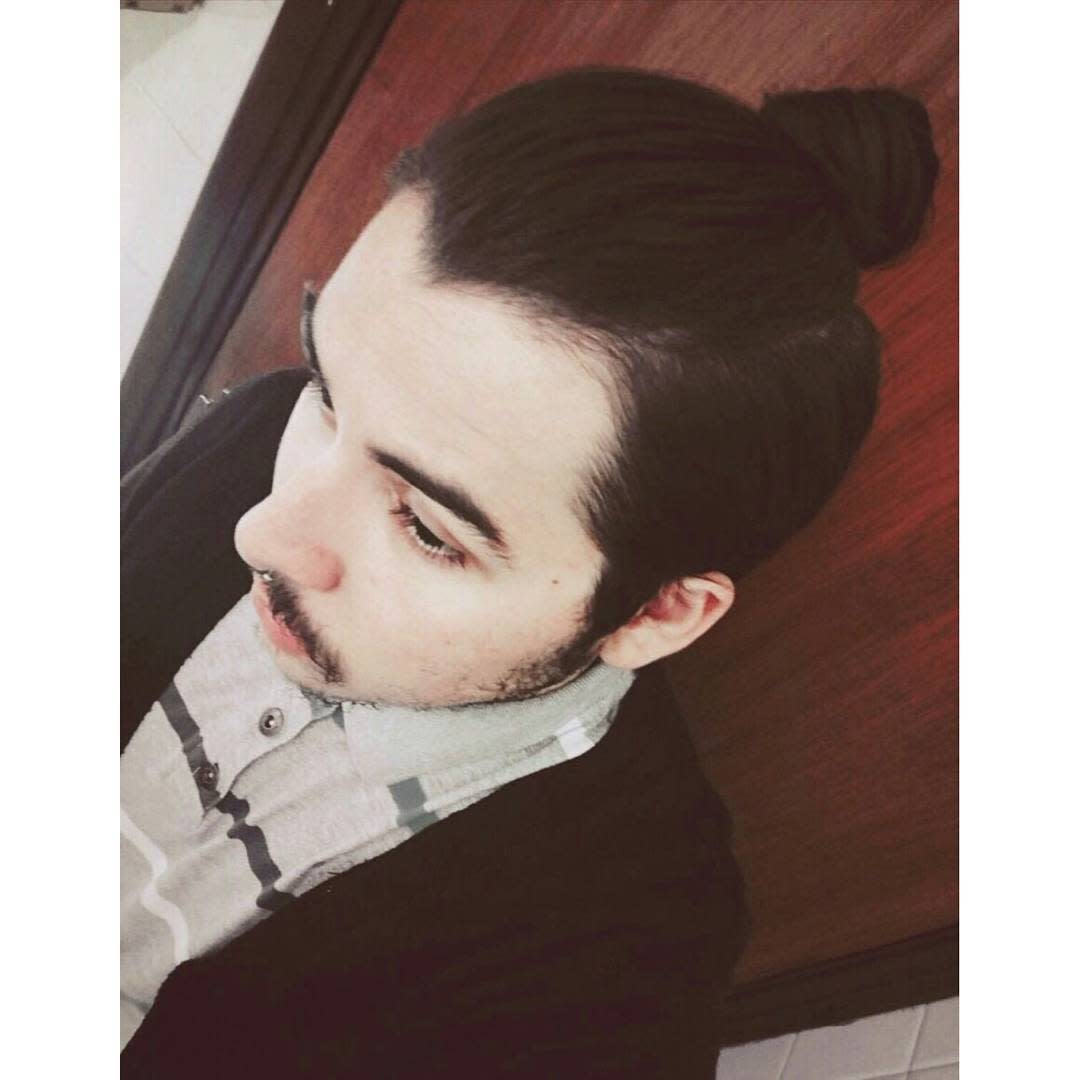 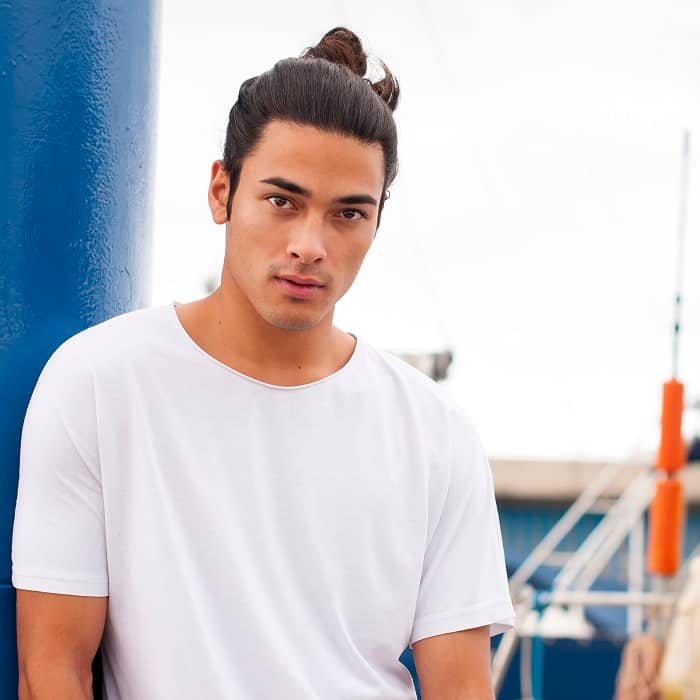 We’ve talked a bit about man buns, but where is the love for the top knot? Contrary to popular belief, this trendy style is not only for women.

The top knot is similar to the man bun in that it is a bun formation, but it differs in the amount of hair that it uses. Unlike a regular man bun, where every strand of your hair is pulled together, a top knot uses only some of your hair to create a bun on the top of your head (hence its name). Weird in theory, maybe, but in practice it is super popular and hip! 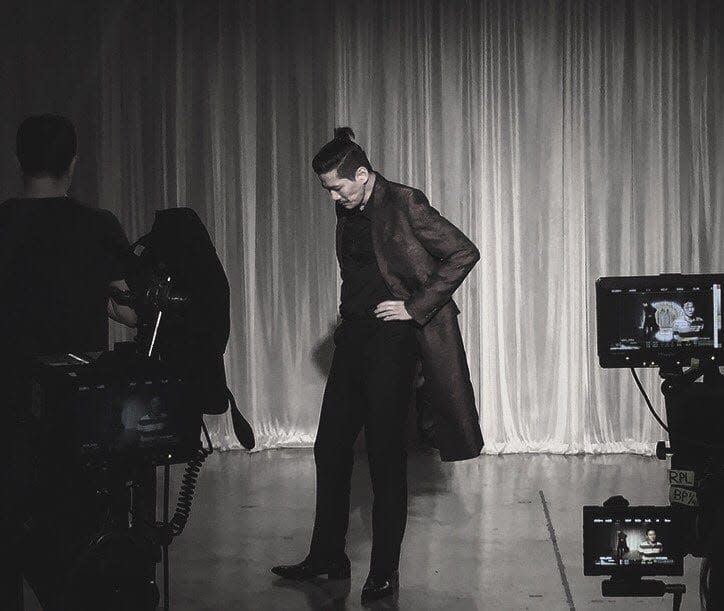 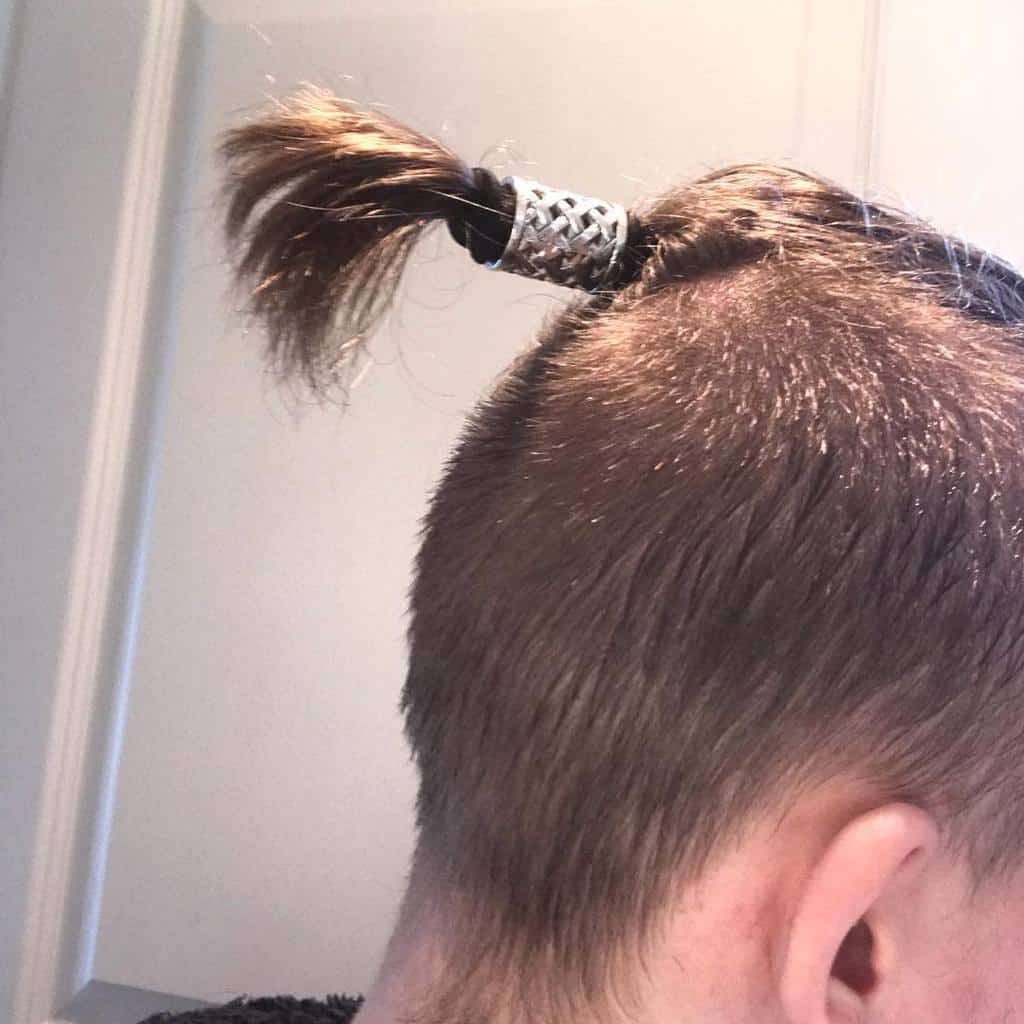 Not all ponytails are created equally! Whether or not you choose to create a “low”, “medium”, or “high” ponytail will have a direct result on how your hair choices tie in (pun intended) with your styling as a whole.

While a low or medium ponytail gives a vibe that is more relaxed, a high ponytail can actually be quite formal and business-like, making it a good choice for a wedding or even a job interview.

If you’re a facial hair fan, then do we ever have the ponytails for you. Although it may take a little bit more grooming and effort, it is possible to pair a ponytail with facial hair and have a result that is trendy.

One option that looks great with a beard is to pull back your hair in a half ponytail — especially if you have long hair. It also looks wonderful with shaved sides. Which brings us to our next option…

Shaved side hairstyles have gained traction in recent years, and if you are an adopter of this flattering trend you’ll be happy to know that this hairstyle is more versatile than it may seem at first glance.

In order to successfully pull this look off, you’ll need a good comb and a steady hand.

By defining a bold part on either side of your head, you can create a look that looks like it took more time to put together than it actually did. 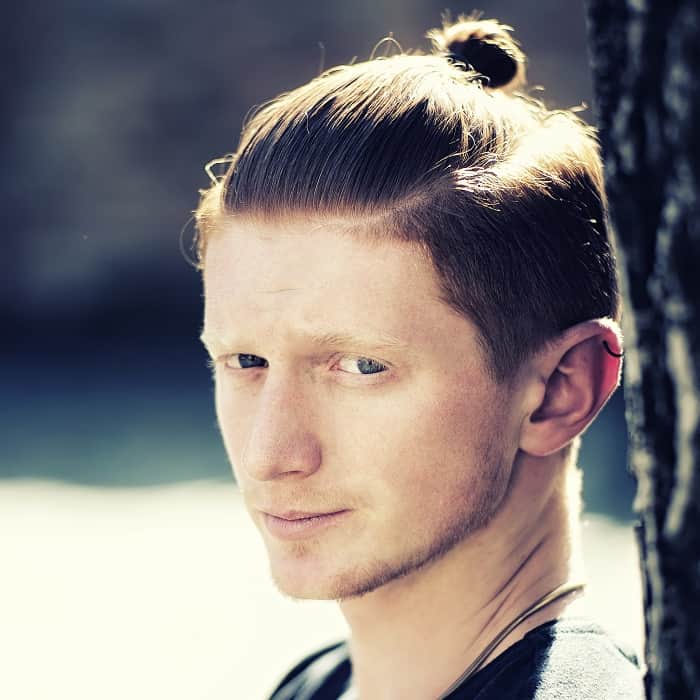 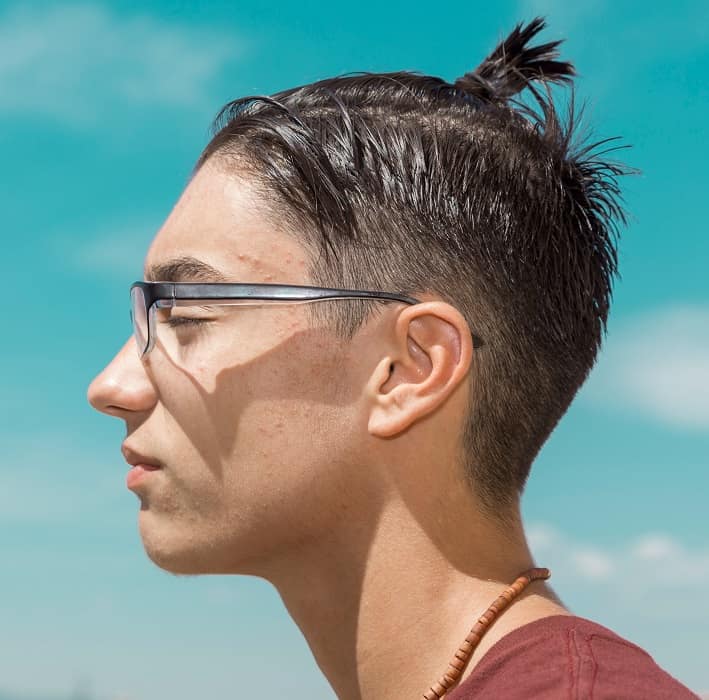 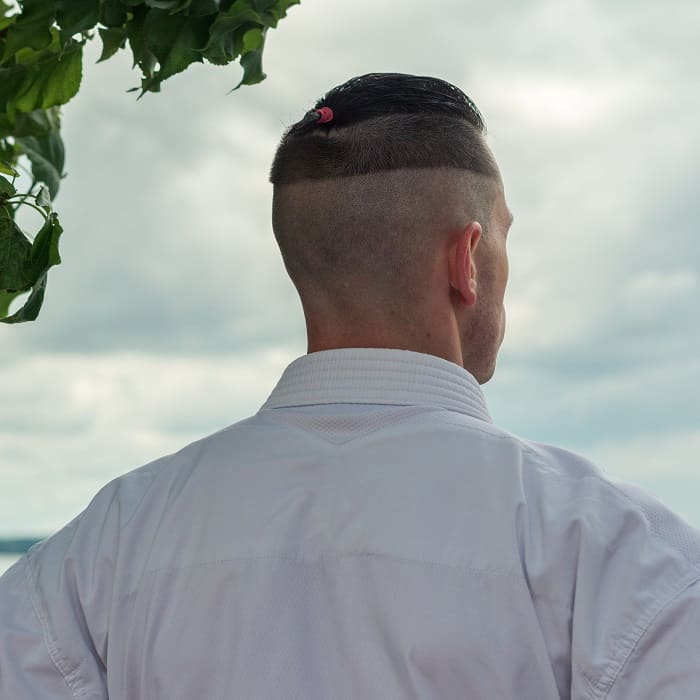 One of the most popular misconceptions about men’s ponytails is that they are a hairstyle reserved for adopters of long hair only. However, this could not be further from the truth!

With a little touch of creativity, short haired males can also tip their toes in the man bun or man ponytail waters.

If your hair isn’t long enough to pull at the top of your head, opt for a low hanging ponytail.

Pro tip: sometimes shorter hair can be harder to wrangle, and the kind of hair tie that you can use can actually make a difference. Opt for a stronger hair tie (think fabric-covered elastic instead of small elastic bands). 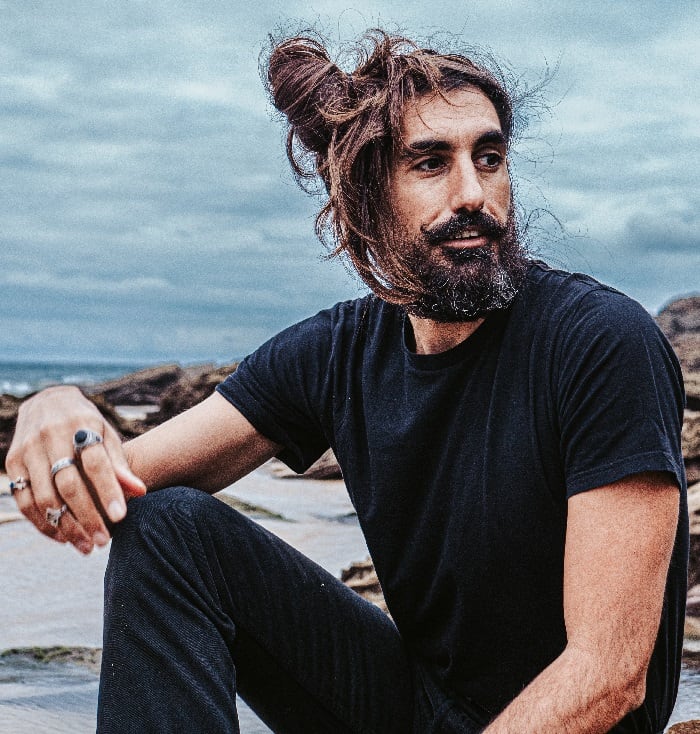 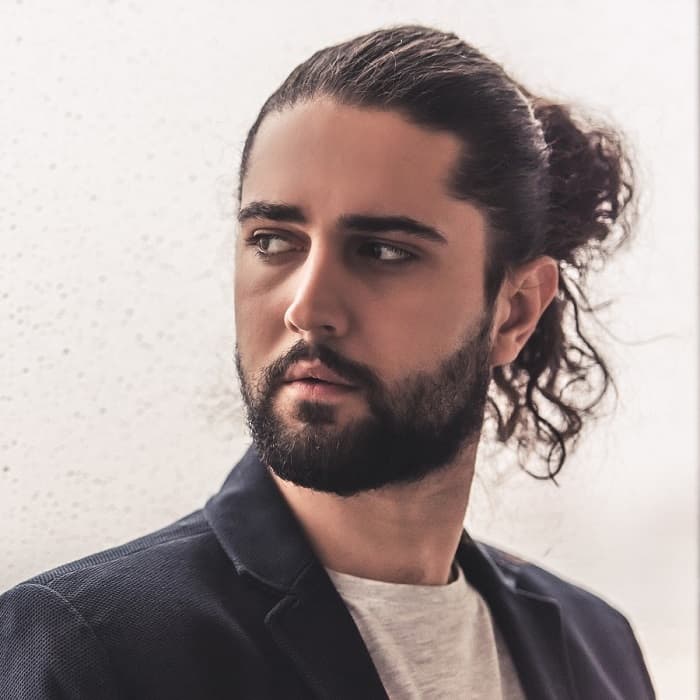 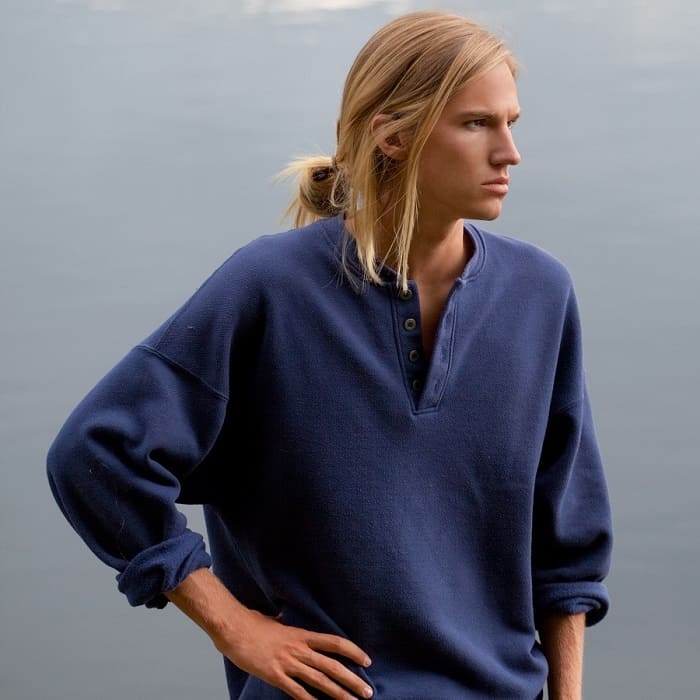 Ponytails for men with longer hair is where the real fun begins! If this describes you, you can benefit from a diverse range of ponytail styles, from a low-hanging casual tie to a braid.

We are also a big fan of the “half ponytail”, where you leave the majority of your hair down and only tie up a portion of it on the top of your head. 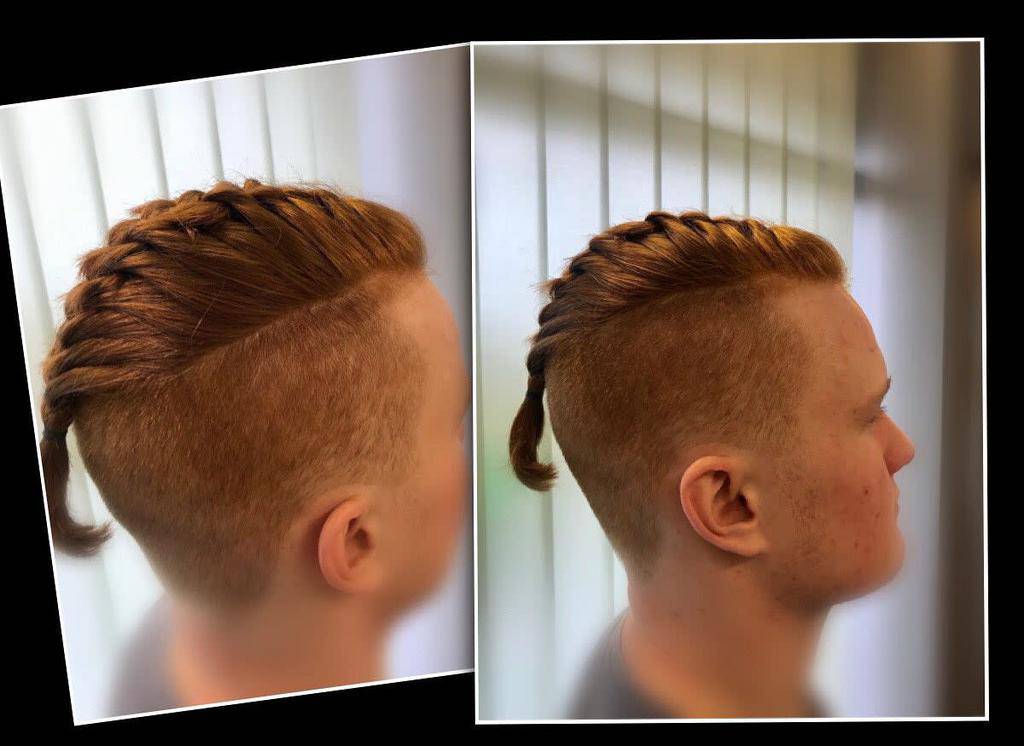 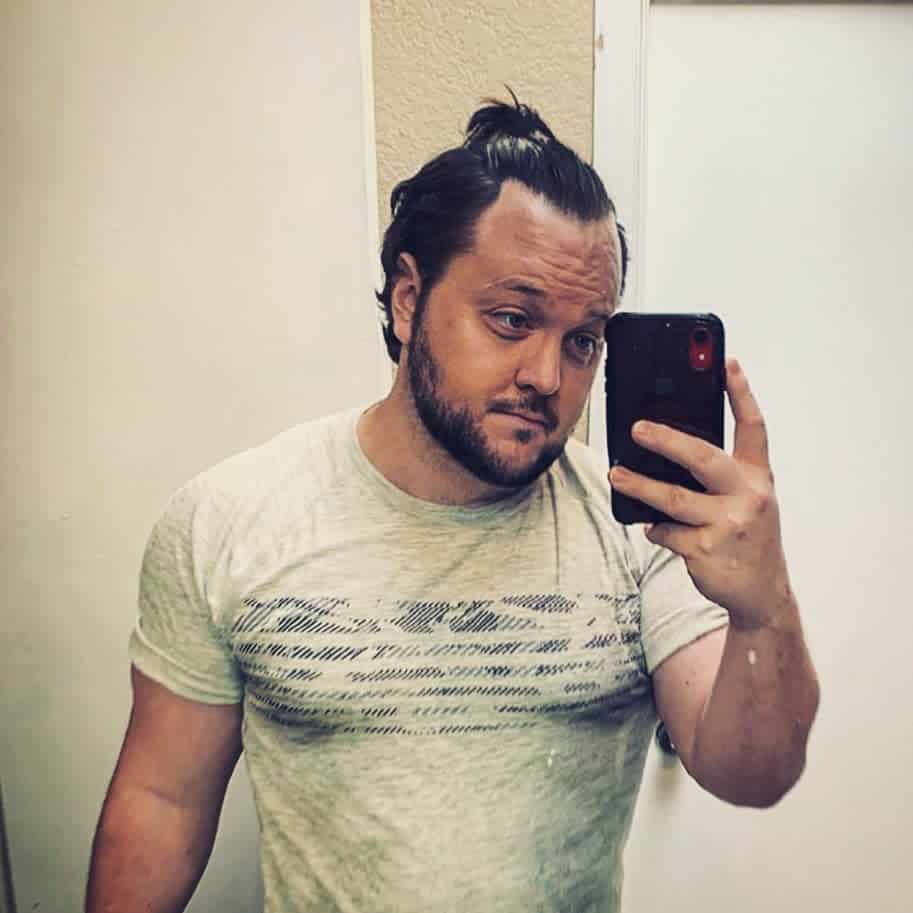 Wondering if you have medium, short, or long hair? Medium hair can most commonly be defined as hair that sits around shoulder length. This is a great hair profile for the male ponytail, as you can pull off both low-lying or high ponytails. 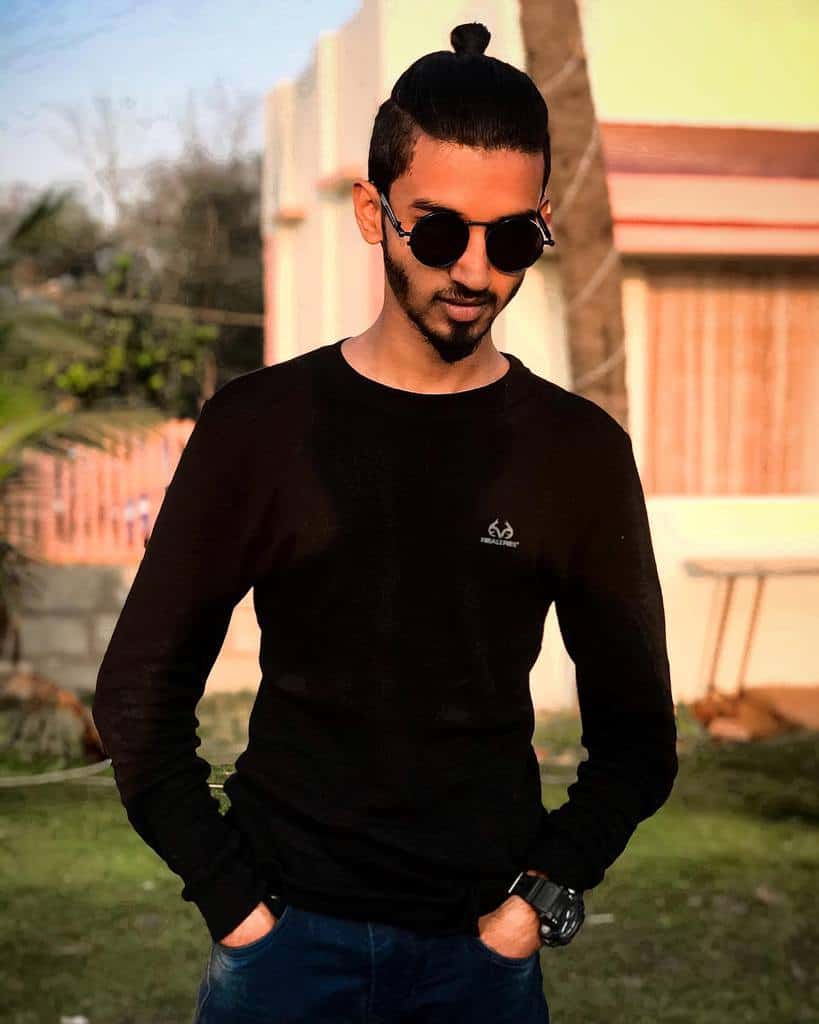 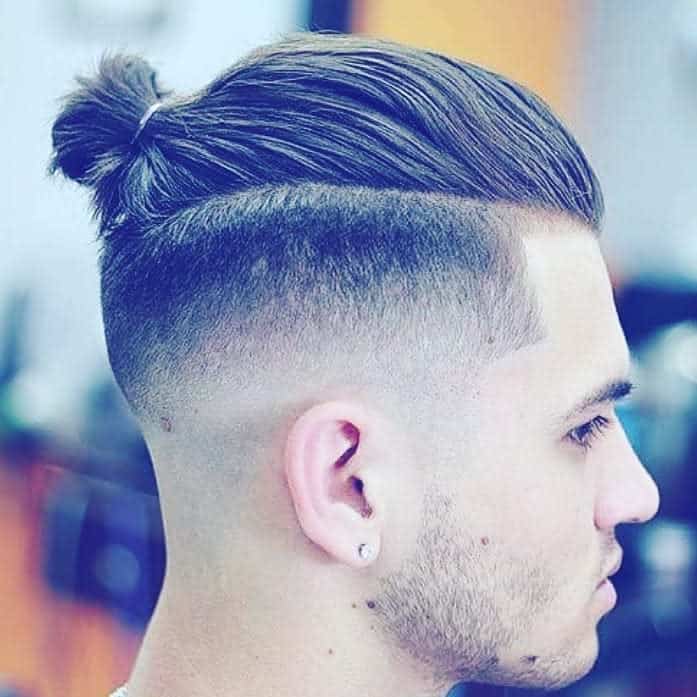 The sleek style is not reserved for short hair either! To achieve a sleek ponytail, it’s all about using the right product for your hair type. One great product is called a pomade — if you’re unfamiliar, it’s a type of waxy styling product that results in a Hollywood-esque sleek and shine.

12. Ponytails for Men with Pompadours 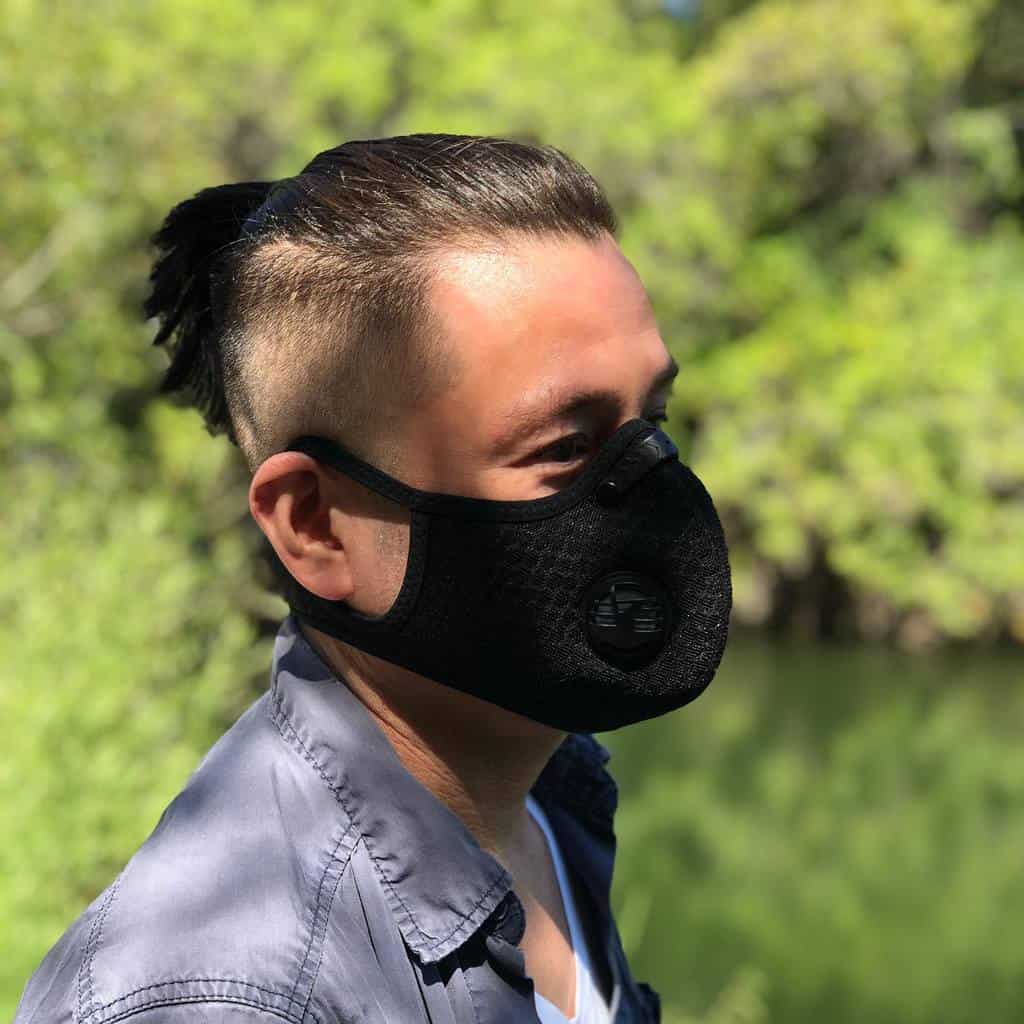 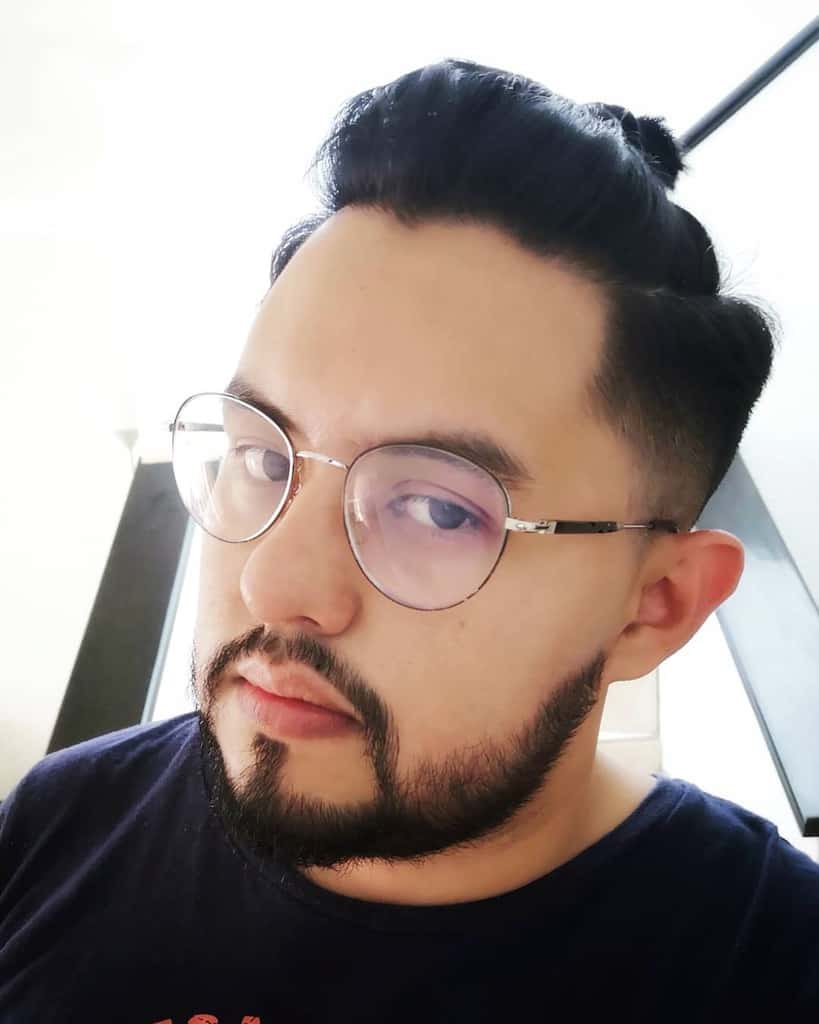 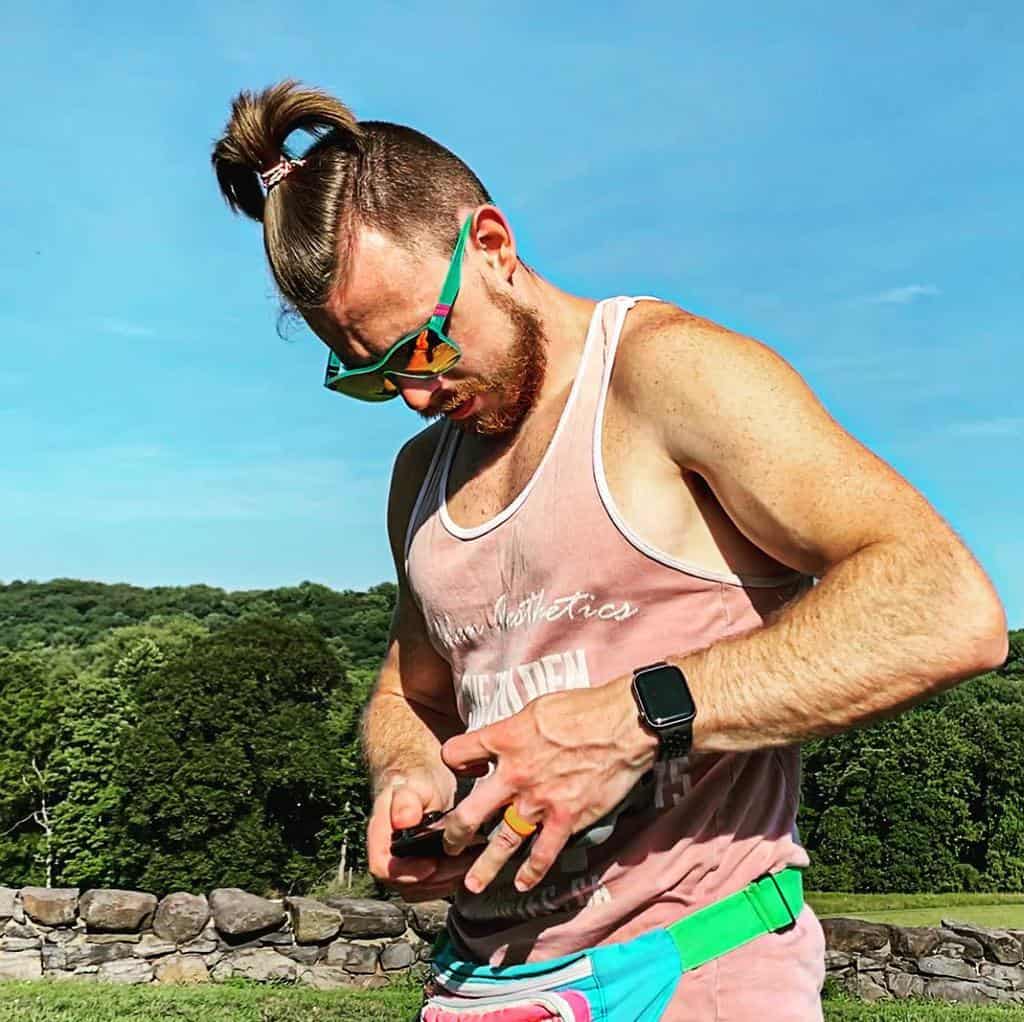 Are you torn between adopting a pompadour or a ponytail? The good news is that you can have both. A pompadour is a popular hairstyle that refers to, in general, hair that is swept over and worn high above the forehead.

The pompadour ponytail stays true to this hairstyle’s roots by combing the hair so that it is puffed up above the forehead and then tying it into a neat bow. 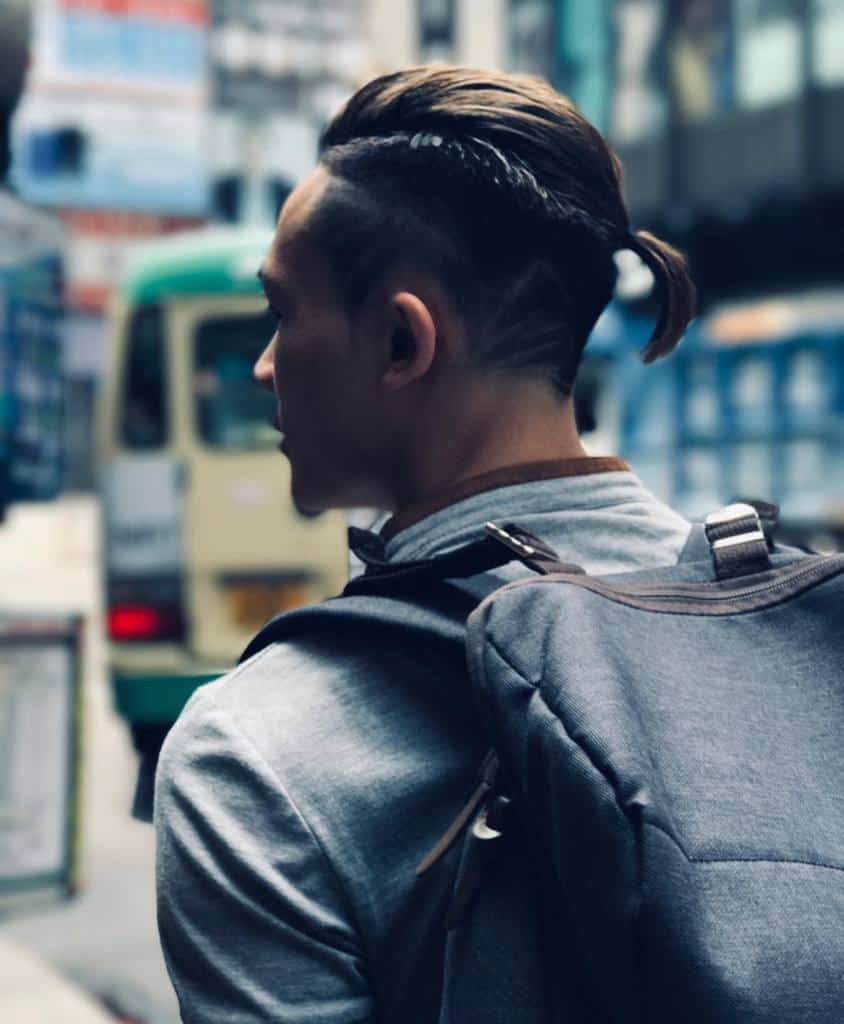 An undercut is a popular hairstyle where the sides and bottom of a men’s head are cut closer to the skin than the top.

Creating a ponytail with an undercut is simple, and can be conveniently done as a way to manage your hair when the top inevitably starts to grow out longer than the sides of your head.

FAQs About Ponytails for Men

Can I use a regular rubber elastic band when wearing a ponytail?

It may be tempting to re-use that rubber band from your latest asparagus or broccoli haul. However, while we admire your dedication to reducing, reusing, and recycling, it’s not advisable.

The rubber material tends to cling to your individual hairs and will result in painful pulling and pinching. It’s much better to use a hair tie that has a fabric covering.

Is it true that wearing a ponytail can cause traction alopecia?

Yes and no. Traction alopecia is characterized as hair loss that occurs as a result of a tight or high ponytail. As long as you are monitoring your hairline for signs of thinning hair or hair loss, it’s safe to put your hair up as much as your heart’s desire. Also, note that some hair loss or thinning may be a natural result of ageing and not due to any styling choice.

Is a male ponytail a good choice for men with receding hairlines?

Men with a receding hairline or thinning hair can face self esteem challenges, but it doesn’t actually have to be this way. There are a multitude of hairstyle ideas for men experiencing hair loss, including a ponytail.

Even if you have naturally thin hair or worry that you don’t have enough hair, pulling your hair into a ponytail can actually give the illusion of your hair being more full than it actually is.

See more about The Best Hairstyles for Balding Men

I’ve never had longer hair before. Should I be using a special kind of shampoo or conditioner?

Welcome to the long hair/male ponytail club! The answer to this question will vary greatly depending on the individual, but the most common answer is no. If your shampoo and conditioner routine was working when you had shorter hair, it’s likely it will work for your long hair as well. It’s best to check with your hairstylist, though.

Is there a specific hair type that works best for ponytails?

Not necessarily. Men with thicker hair may be more likely to gravitate towards a ponytail as it makes their hair easier to manage and control. However, it can actually also be a surprisingly good choice for men with thinning hair — scroll to the bottom of this article if you want to read more about that.